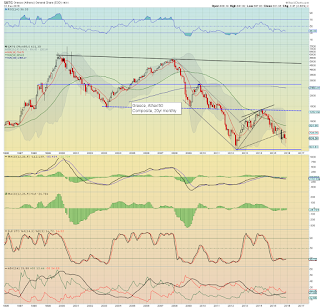 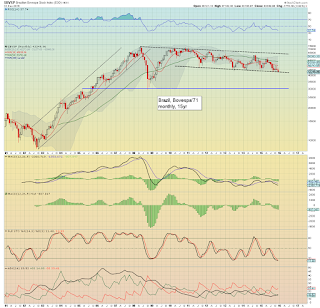 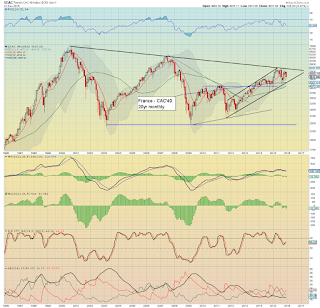 A net yearly gain of 8.5%, having got stuck at resistance of 5283 in April. A Dec' net decline of -3.9%. Those who remain broadly bullish world equities should be desperately seeking a CAC monthly close in the 5300s by early summer. 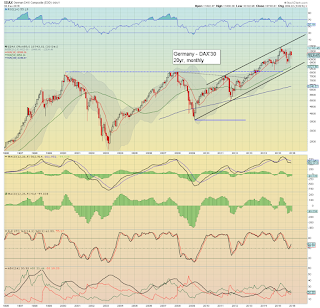 The economic powerhouse of the EU - Germany, saw a net yearly gain of 9.6%, settling @ 10748. The year ended with a very significant December net decline of -5.6%. It is notable that the DAX is back under the 10MA, and overall price structure from the Aug' low could be argued is a large bear flag. Core support in 2016 will be the old double top of 2000/2008, around the 8K threshold. 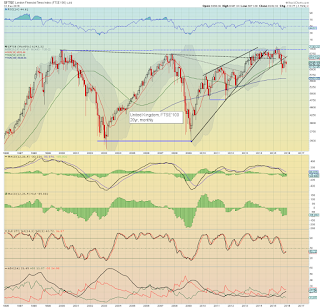 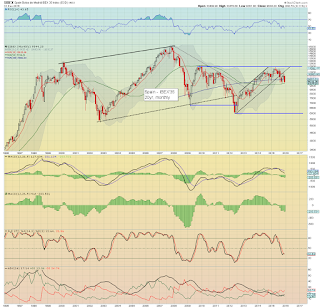 Remaining the most problematic of the EU-PIIGS, Spain saw a net yearly decline of -8.0%, having maxed out in April @ 11884. Resistance around 12K remains extremely powerful. The year ended with a Dec' net decline of -8.1%. Price structure is a multi-month bear flag, sustainably under the 10MA. Next downside target is the 8000/7500 zone. 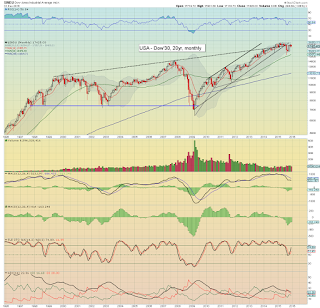 Underlying MACD (green bar histogram) cycle remains negative, and is threatening to start ticking lower again. At the current rate of decline, the MACD (black line) will turn negative in April/May. The last time that happened was Sept' 2008.

As things are, unless the Dow can attain a Jan/Feb' close >17500, the default trade is now to the short side. 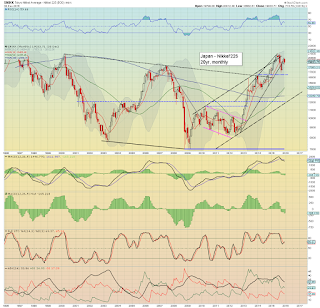 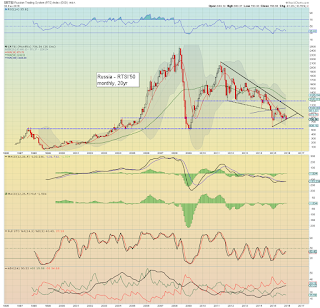 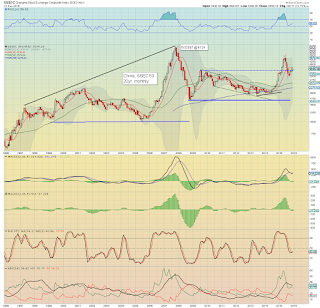 Like many other indexes though, price structure could be argued is a bear flag from Aug-Dec. Equity bears should be seeking a Jan/Feb close under the very important 3400 threshold. In any sig' down wave, key supports are 2500, 2000, and the 1600s.

No doubt, the Chinese leadership will launch further witch hunts in 2016, and that sure won't help inspire capital not to attempt an escape from such communistic rule.

A few things should be clear...

-The EU indexes peaked April/May, and were the early warning for broader global equity weakness in Aug/Sept'.
-Germany and Japan were especially helped via ECB/BoJ QE support.
-The commodity dependent BRICs of Brazil, Russia, and China were greatly impacted.
-Price structure on most world markets is a bear flag that stretches from the Aug/Sept' low to the Dec' peak.
-The year ended on a very bearish note, with 9 of 10 markets seeing net Dec' declines.

Equity bulls should be desperate to see indexes retake their respective 10MAs, and negate the flag with the positive January.

All equity bears need to achieve is a marginal Jan' decline, and if that is the case, a major wave lower - at least to the Aug' lows, will likely occur within the March/May period.

The week will be focused on the next big jobs data, along with renewed interest in the chatter at PRINT HQ.

*the FOMC mins' will be released at 2pm, and Mr Market will be especially looking for any chatter on normalising rates across 2016.

*Fed official Evans will be speaking on the economy on Thursday afternoon.
--

Along with my own outlook, I will post YOUR predictions for 2016 on Monday evening.

Indeed, it is not too late to submit your best guess/comments.. see HERE for details.
-

Enjoy the holiday weekend, I'll be back on Monday :)
Posted by Trading Sunset at 17:00:00
Email ThisBlogThis!Share to TwitterShare to FacebookShare to Pinterest
Newer Posts Older Posts Home
Subscribe to: Posts (Atom)