It was a broadly strong week for US equity indexes, with net gains ranging from 4.2% (Nasdaq comp'), 2.4% (sp'500), to 1.1% (Transports). Near term outlook offers a few days of weakness, before renewed upside into August. 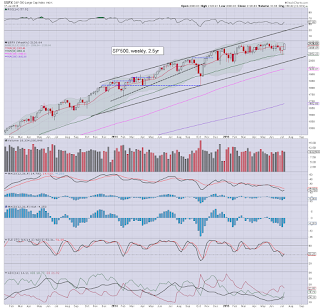 There is immediate viable upside to around 2140. From there, given another 2-3 weeks, the 2180s look just about possible, which would be a key hit of the upper bollinger on the giant monthly cycle. Key rising support by end August will be around 2125. A break < 2K would be very significant, and open the door to 1950/1850 zone by early October. On no outlook do I see sustained action <1800 this year...or next.

Best guess remains, a few days of weakness in the immediate term to 2090/80, and then renewed upside into August. 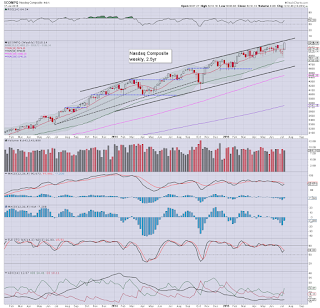 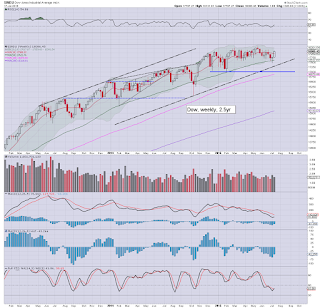 The Dow climbed 326pts (1.8%) to 18086. Broadly, the Dow has been stuck since February, although it did make a marginal new historic high of 18351 in May. Underlying momentum remains negative, and it will take at least 2-3 weeks to have a chance at seeing a bullish cross.

Best case downside remains 16500/000 by early October. In the scheme of things though, it really isn't that bold a target, and would only take the Dow back to levels from last October. 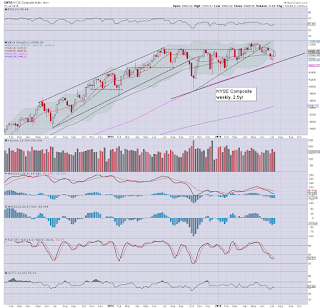 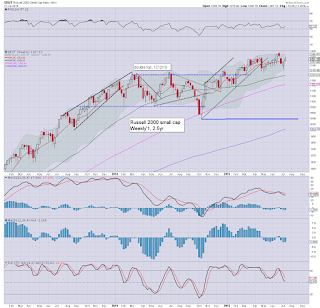 The second market leader climbed for the second consecutive week, with a net gain of 1.2% @ 1267. Sustained action much above the 1300 threshold looks difficult. First downside is the 1200 threshold. Under no realistic outlook does the Oct' 2014 low of 1040 look able to be broken. 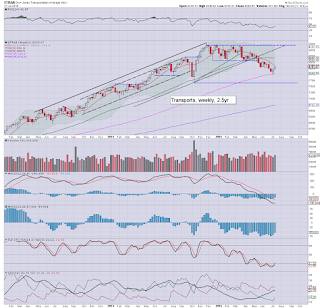 The Transports continues to be the market laggard, seeing a net weekly gain of only 1.1%. The broader downward trend from the Nov'2014 high of 9310 remains intact. At best, the equity bulls might be able to push upward to around 8600. Subsequent downside to at least 7700 is then anticipated. Best bearish case is the 7500/300 zone.

Last weeks spike low was confirmed with sig' net weekly gains across all indexes. Many indexes have been clearly stuck for most of the year, even if some did manage marginal new historic highs.

Best guess... a few days of weakness... with another 2-3 weeks of upside, before first chance of a key turn lower around mid August.

The fact the Nasdaq broke a new historic high on Friday does bode in favour of the sp'500/Dow breaking marginal new highs in August. I suppose the new up cycle could drag out into September, but that looks unlikely. After all, the bigger monthly cycle turned negative five months ago... price momentum is increasingly favouring the equity bears.

There is very little scheduled in the coming week. No doubt though, the ongoing Greek situation will periodically generate a few news headlines.

-
Back at the Monday open :)
Posted by Permabear Doomster at 17:00:00
Email ThisBlogThis!Share to TwitterShare to FacebookShare to Pinterest

Awaiting the bigger trade in August

Regardless of any equity weakness in the first half of next week, the US market looks set to climb into August. The bigger equity-short/VIX-long trade does not look viable for at least another few weeks. 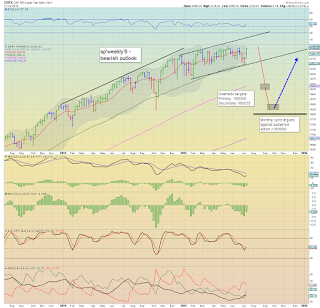 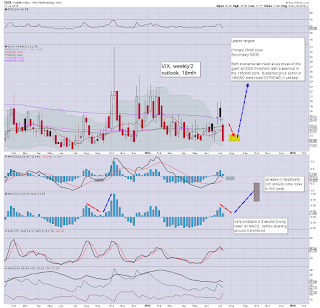 It has been another long week.

Suffice to say, I will be increasingly referencing the above two charts across the next few months.

A break under the giant sp' 2K threshold looks due in the late summer. For now... it is mostly a case of sitting on the sidelines, and await a better setup.

Eyes on the VIX weekly cycle... in early August! 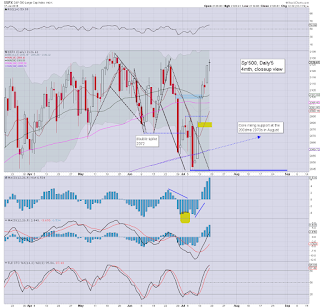 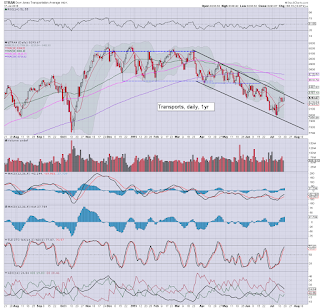 *Transports remains the market laggard. The daily closing candle was a clear spike-fail at declining resistance, and does bode in favour of equity bears early next week.
--

The bigger weekly cycle will be offering the 2140s next week, anything much above 2150/60 will be difficult.