Volatility melts higher into the weekend

With the main indexes seeing continued moderate weakness into the weekend, the VIX battled slowly..but consistently higher across the day, settling +10% @ 15.46. Across the week, the VIX gained 17.8%. Despite the weekly gains, VIX 20s do not look viable any time soon. 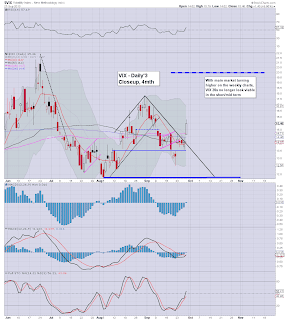 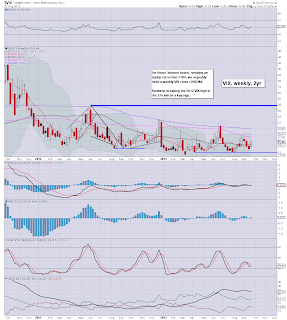 So, the VIX did make it into the 15s..something which seemed difficult just a few days ago.

Yet..equities sure don't look particularly weak, despite a broad..but very slow decline from the Sept'19 high of sp'1729.

All things considered, even if VIX opens higher next week, it'll be prone to a major fail (be on the look out for a black candle on the hourly/daily charts, early Monday morning).

I just can't envision the VIX back in the 20s any time soon. This market remains powerfully bullish, and with the Fed still throwing $85bn at the US capital markets each month...how are we going to see any significant equity declines?
--

more later...on the equity indexes
Posted by Trading Sunset at 23:00:00
Email ThisBlogThis!Share to TwitterShare to FacebookShare to Pinterest 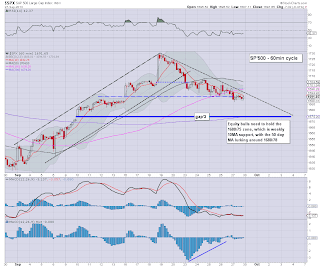 Well, another week comes to an close, and it was certainly one for the bears, but across the week, the main indexes only declined by around 1%.

*I remain long the US market, am underwater, but continuing to look for much higher levels in October.

*next main post, late Saturday - on the US weekly indexes
Posted by Trading Sunset at 21:03:00
Email ThisBlogThis!Share to TwitterShare to FacebookShare to Pinterest

The main indexes are holding moderate declines, with the sp' again breaking lower into the 1680s. The VIX continues to melt higher, now +10% in the 15.40s - the highest level since Sept'9. As is always the case, equity bears are at risk of a major reversal on any last minute political agreement. 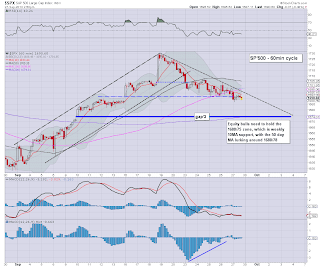 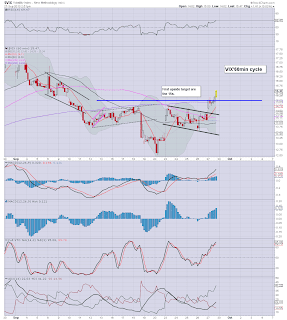 Certainly, in terms of the VIX, today is showing some consistent strength. The entire formation from early Sept' could be argued is an inverse H/S formation - target would be the upper 16/17s.
--

Regardless of the closing hour, I remain resigned that this market will eventually battle back upward..and break new highs in October.

As many recognise, even if there is a shutdown, at most, it would last just a few days, and impact relatively few (if any) important services.
-

Those bears who have been short across this week, would probably do well to exit into the weekend, rather than risk a significant gap higher, whether next Monday..or later in the week.

*King Obama due to speak at 3.30pm. Will he spook the market?

UAL continues to dive bomb into the weekend, -8.8%. 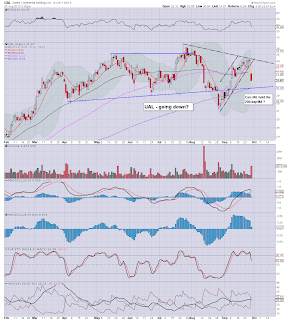 Another $1 likely lower on that..before first opportunity of a reversal.
-

3.35pm.. Naturally, his highness is late. Market on edge...but looking prone to a stupid spike higher into the close.

I have to think, those long VIX right now, should be closing out for the weekend. We're seen a 2pt gain from the mid 13s. to the mid 15s. I simply can't envision VIX 20s any time soon.

3.44pm ahh. there he is..only 12 minutes late. His time keeping is improving!

First upside target 1693..any move over that..and bears will be covering into the weekend.

I sure wish I could believe otherwise..the short-side is where the big money is made in options land, but..no. If an agreement is made....this market is going to ramp hard.

Its not like we've not been through this many times in the past few years.
Posted by Trading Sunset at 19:58:00
Email ThisBlogThis!Share to TwitterShare to FacebookShare to Pinterest

The main indexes are still moderately lower. Most notable, the VIX is quietly melting higher - +7.8% in the 15.10s, due to increased uncertainty about whether there will be a US Govt' shutdown. Equity bulls should be content with any weekly close in the 1690s. 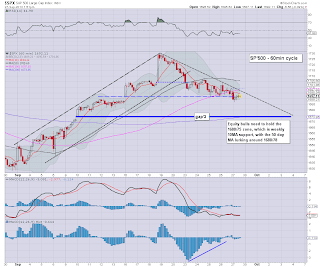 *I've been updating my chartists/blog links. I'm always looking for new sites to add, let me know if you know of any other good ones! I especially like to highlight the little/starter blogs, rather than the huge sites like Zerohedge or Slope of Hope, which we certainly are already aware of!
--

As for the market..its turning into a very quiet end to the week. Yes, there is weakness out there, and yes there is uncertainty over the US govt' funding/shutdown issue..yet..despite a break into the sp'1680s earlier..the primary weekly trends remain bullish.
-

To me..the whole situation is starting to smell just like late Dec'2012...and we know how that turned out. The difference between now and then?

Ohh yeah, around 300pts on the sp'500.  Urghh
Posted by Trading Sunset at 18:56:00
Email ThisBlogThis!Share to TwitterShare to FacebookShare to Pinterest

The main indexes are holding moderate declines ahead of the weekend. Yet, Mr market is relatively muted, and both bulls and bears alike look tired. Bulls look unable to break back into the sp'1700s, whilst bears look unable to push much lower, until the US Govt' shut down issue actually occurs. 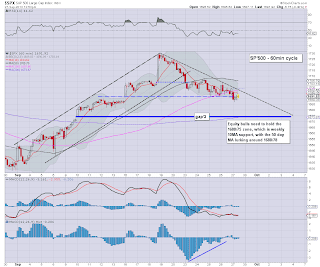 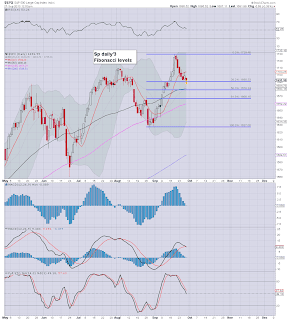 Price action since last Thursday has been a very consistent melt lower.

Any daily closes in 1670s should be a real concern to those on the long side, not least since it would start to turn the bigger weekly charts to the downside.

The main indexes are holding moderate declines, with the sp -7pts @ 1691. The VIX is showing slight market concern about a looming US Govt shutdown (however temporary that might be), +5% in the 14.80s. Equity bears should be clawing for a weekly close in the 1680s. 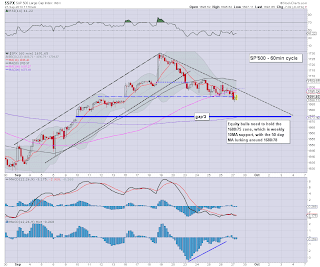 Certainly, the bulls are not showing any real sign of power, although the MACD hourly cycle will be likely be looking floored this afternoon.
--

Considering the US Govt' shutdown issue, the obvious question is 'who wants to go long across the weekend'?'

Thats right...very few. So, for those on the short side..there remains the possibility of a down move to the 1680/75 zone, if not today..then next Monday.


*something I've not mentioned, the USD is -0.4% in the 80.10s. Any daily closes in the 79s will bode for 77s in October, which would help to negate any general market downside. I'm sure many will cover that issue across the weekend.

time for tea!
Posted by Trading Sunset at 16:58:00
Email ThisBlogThis!Share to TwitterShare to FacebookShare to Pinterest

The main indexes remain weak, and despite the break of the sp'1691 low, the bears still don't look as though they are capable of any significant downside power. VIX is cooling down a touch, back in the upper 14s. Bulls should be gunning for a weekly close in the sp'1700s 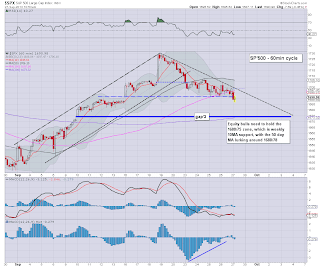 The bears are clearly still in control, which is indeed a little ironic, after the Fed maintained QE at $1trn a year.

The problem is..these sorts of minor moves are just not good enough, and once the bulls do manage to get a full turn upward..then bears are going to be ground down...as they have been dozens of times in the past two years. 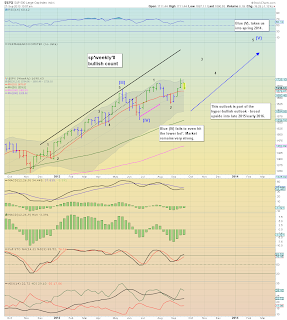 Even a Friday close of 1690 will do nothing to dent the primary trend. Actually the situation is very similar to Dec'2012.
Posted by Trading Sunset at 15:55:00
Email ThisBlogThis!Share to TwitterShare to FacebookShare to Pinterest

10am update - bears achieve a break

With the break <sp'1691, the bears have opened the door to a continued push lower to 1680/75, which will is certainly viable today. VIX is showing mild concern, +6% in the 14.90s. Precious metals are benefiting from concern about a seemingly likely US Govt. shut down...if only temporary. 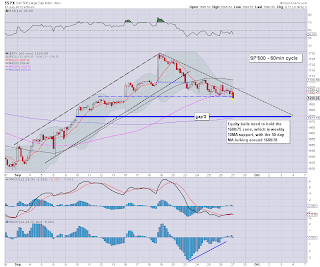 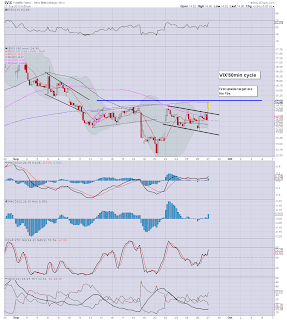 So...the end of the week, and bears are managing to push the market lower..if at a relatively slow pace.

The big issue is whether some last minute agreement (as is usually the case) can be made, preventing a temporary shut down of some US Govt' services.
--

Notable mover...UAL, downgraded to neutral from 'buy'.by someone the market considers important. 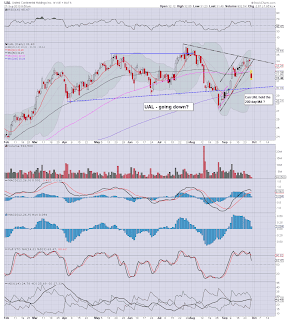 Yes, we've broken a level, but bears still look weak. The only slight issue is a VIX that has finally broken back into the 15s.

*note the R2K, is only down 0.2%. Generally, in a decent bear market, the R2K would be leading the way lower..and yet...its clearly only a touch lower.
--
Posted by Trading Sunset at 14:52:00
Email ThisBlogThis!Share to TwitterShare to FacebookShare to Pinterest

Good morning. Futures are moderately lower, sp -7pts, we're set to open at the recent low of 1691. Precious metals are significantly higher, with Gold +$18. Equity bulls face the real threat of seeing the market break a new cycle low right at the open, which will open up the 1680/75 zone. 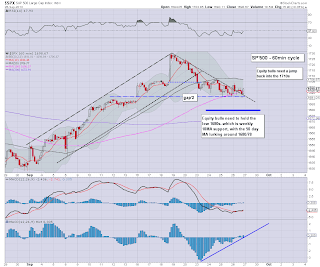 It is a very borderline situation, so baring a reversal to the upside..right at the open, 1691 does not look likely to hold.
--

*Despite the opening weakness, it is probably important to keep in mind that today is a heavy QE-pomo day of around $5bn.
--
Notable early mover - NKE (now a Dow stock), almost 7% higher, after good earnings.

The equity daily charts are offering rather clear bull flags. Market bulls merely need a Fri/Monday close back in the low sp'1700s, and that should open up much higher levels, as we move into October. If the market does not get spooked this autumn, there is no reason the rally won't continue into 2014. 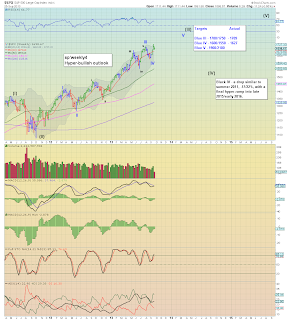 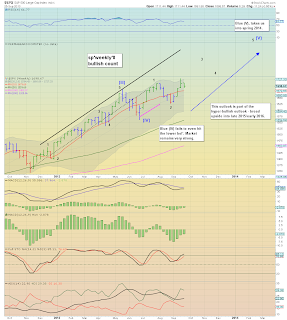 I sure don't like posting such bullish charts. I wish I could believe we were on the threshold of a major autumnal decline. Yet...my best (least biased) guess - as best as a 'permabear' can be unbiased, is that we're going to rally into October.

I realise some good chartists out there are calling for a key cycle top in the 1740/60 zone, but I just don't see why the market would stop there. After all, there is the usual 'Santa/Christmas' rally, and then there will be the usual gains in the spring.

So long as no major 'issue' rears up in Oct/November, this market looks set to rally for at least another six months, at which point the market will comfortably be in the sp'2000s. I realise for many, that is a sickening thought, not least for those who truly understand the reality of the 'new world economy'.

The week concludes with personal income/outlays, and consumer sentiment data. However, perhaps more important, we have another two Fed people talking, not least of which is Dudley..who can often be a market mover.

*I remain long from last Friday afternoon, am underwater, but reasonably confident of an exit in the 1720/30s. I doubt I will have the patience to hold for the 1740/50s.
-

A few videos to wrap up the day...

First, Mr Permabull..who is looking for a daily bull flag to play out...as am I.


Second, Mr Biderman...whom (as usual) is bearish about the bigger macro-picture

The main indexes all closed moderately higher, with the sp' managing to hold the low 1690s. The two leaders - Trans/R2K, both closed higher by around 0.4%. The recent five day down wave appears to be concluded, and a major multi-week ramp into the mid 1700s now looks very likely. 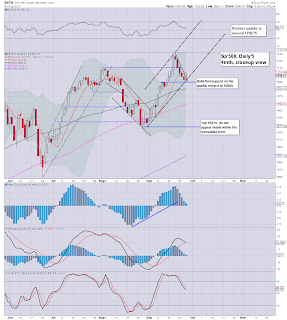 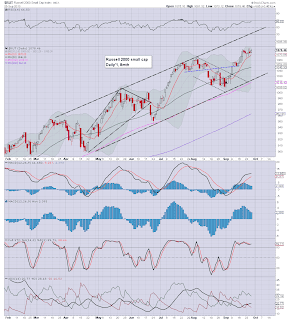 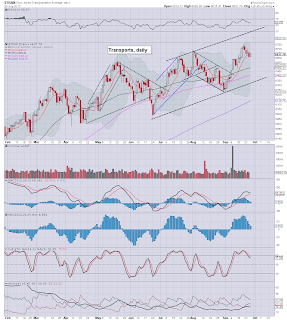 The daily charts are offering rather clear bull flags - spanning the past six trading days.

Bears should be desperate for a further break lower, into the 1680s, but considering the price action this week, that no longer looks likely.

It would seem it is now a case of when the market starts a major new wave higher. Whether it begins tomorrow, next Monday (end of month/Q3), or early October, shouldn't make any difference to those already on the long side.