The week closed with the main indexes showing moderate gains - relative to the big Thursday drop. VIX closed almost 10% lower, a 'no fear' market again. Arguably, this is laughably mis-priced in my view. Bargain puts for all the good bears out there this Friday! 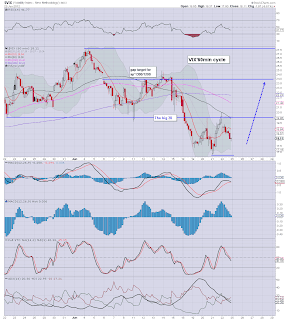 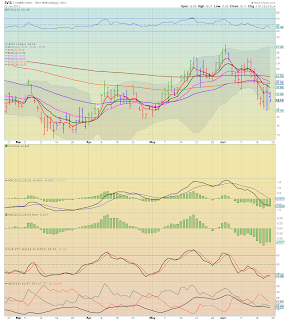 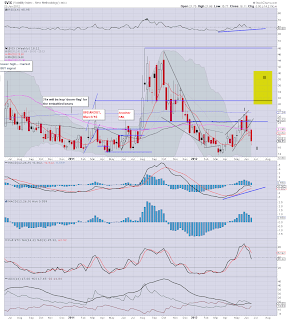 A bearish end to the week for volatility, but we've seen the VIX probably put in a floor in the 16s this past Wednesday.  We have clear inside day as seen on the daily chart. The second blue candle, the bears should be seeking a big green candle on this chart next Mon/Tuesday!

The move from VIX 27s to 16s certainly makes for a strong wave'2 retracement..and we're now arguably set for VIX to break into the 30s...with sp<1266 in the next week or two.

The bigger weekly cycle shows the underlying momentum has been clawing back up since March. We're very much due to see some considerable volatility in July.
Posted by Trading Sunset at 22:30:00
Email ThisBlogThis!Share to TwitterShare to FacebookShare to Pinterest

A good week for the bears.With the FOMC out of the way, the bears now have a clear 5-7 weeks to drive the indexes below the wave'1 low of sp'1266. If the market gets spooked, a move as low as sp'1225 is possible as early as the end of next week. 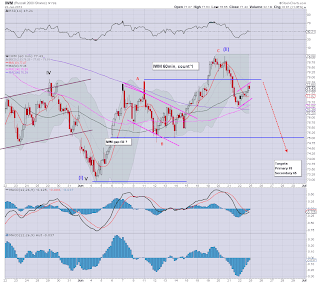 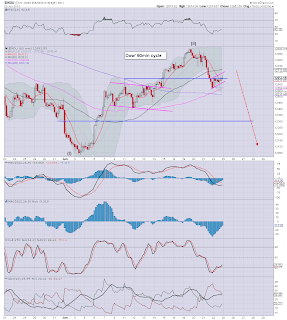 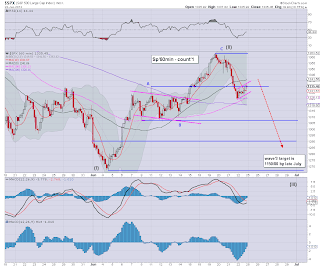 Clear bear flags (pink!) on all the main indexes..all set to break/snap lower on Monday.

A very long and uncertain weekend ahead for those who are bravely holding positions, but especially those of a bullish persuasion. After all, the 12 day rally into FOMC Wednesday has sharply come to an end, and now we're in danger of slipping back under the big 1300 level.

Across the weekend, updates on the hugely important bigger monthly cycles, including currencies and commodities - of which WTIC Oil is a giant red flag.

Have a good weekend
Posted by Trading Sunset at 21:02:00
Email ThisBlogThis!Share to TwitterShare to FacebookShare to Pinterest

3pm update - who wants to hold long across the weekend?

Market still battling away with gains of almost 10pts on the SP'500. There is still a chance the algo-bots will somehow do a stop-sweep all the way up to 1340 in this closing hour.

Considering the daily, weekly, and monthly cycles, today's action is mere noise in the grander picture. 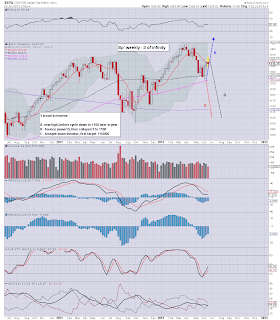 Want to take a guess at what next weeks candle will be ? 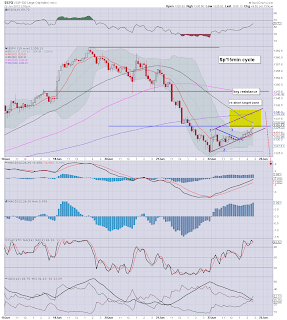 We're in the target zone I set earlier this morning. It remains a pretty clear bear flag, next downside target is 1305/00, possibly 1290.

More after the close...
Posted by Trading Sunset at 19:55:00
Email ThisBlogThis!Share to TwitterShare to FacebookShare to Pinterest

Whilst the casino wheel continues to spin at the NYSE, in Europe, more important things are about to begin. Its the big Euro'2012 Greece vs Germany football game ;) 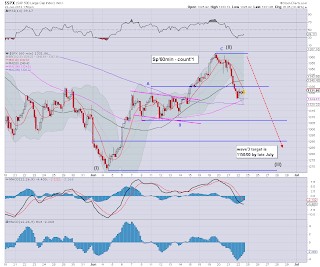 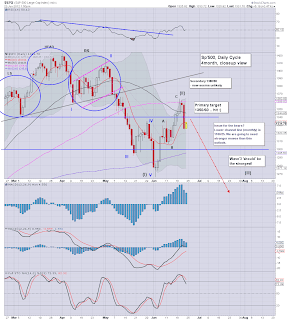 Bulls have had over 4 hours to ramp this market back..and they ARE struggling. The VIX fell a very understandable 8% or so. The daily chart is arguably all that matters to summarise where we are headed..and it ain't sp>1422

If market gets spooked over the weekend, sp'1290 is well within range, with a swift jump in the VIX to 24.

Ohh..and 'best guess'...would be Germany ;)
Posted by Trading Sunset at 18:52:00
Email ThisBlogThis!Share to TwitterShare to FacebookShare to Pinterest

1pm update - trying to be patient

Market really struggling to break higher...the 15min cycles, could already be maxed out....those bulls looking for 1350s..and beyond into next week..err, I don't think so. 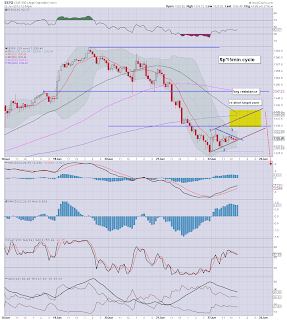 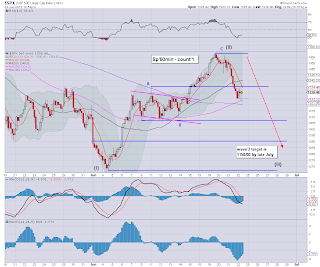 Still waiting to re-short, but probably wthin this hour.

We have clear bear flags all over the place.

Update 1.03pm....Short, from equivilent of sp'1330.
--
Seeking marginally red indexes by the close.
Posted by Trading Sunset at 17:55:00
Email ThisBlogThis!Share to TwitterShare to FacebookShare to Pinterest

Today's chop still has an underlying up trend to it. As I like to say..the good bear...is a patient bear.

A reminder on the bigger picture... 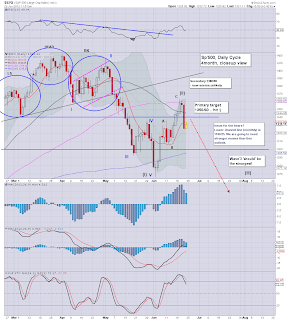 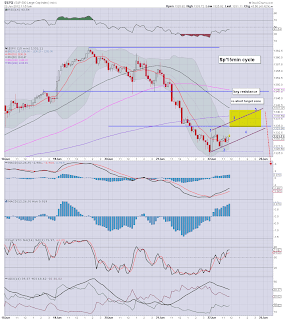 There will be strong resistance at the recent 1335/40 level. I would find it hard to imagine the market managing to break into the 1350s...for some months to come.

There can be no excuses for anyone today.
Posted by Trading Sunset at 16:53:00
Email ThisBlogThis!Share to TwitterShare to FacebookShare to Pinterest

11am update - Battling it out

A very mixed up Friday so far. VIX remains lower by 3-5% though, so that is confirming at least some moderate upside for the indexes. 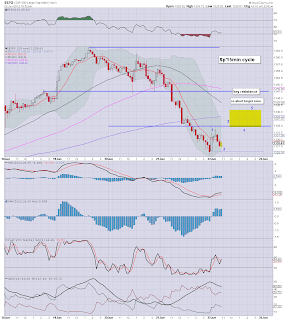 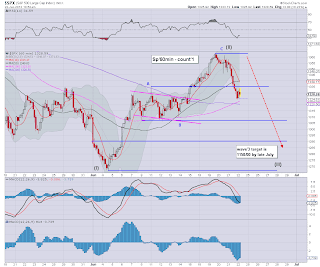 Nothing to add right now, this market is merely battling its way higher...but it sure is choppy action.

A re-short around 1338/40 would be much preferred, around 2pm.
Posted by Trading Sunset at 15:54:00
Email ThisBlogThis!Share to TwitterShare to FacebookShare to Pinterest 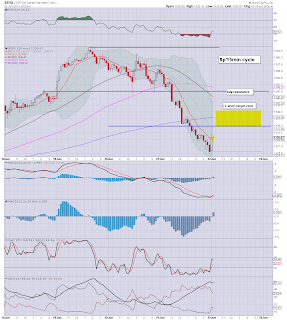 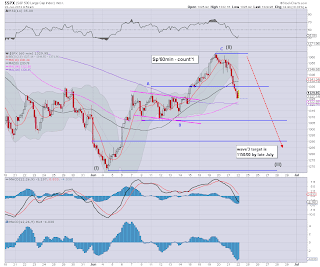 I'll update..as/when I start hitting buttons :) Right now, that doesn't seem likely until around 1pm
--
Posted by Trading Sunset at 14:54:00
Email ThisBlogThis!Share to TwitterShare to FacebookShare to Pinterest

Yesterday was such a strong downward day, it is highly likely it can be seen as confirmation of wave'2, and thus 3' has begun. The default trade now is to short until sp'1150/00 by late July. 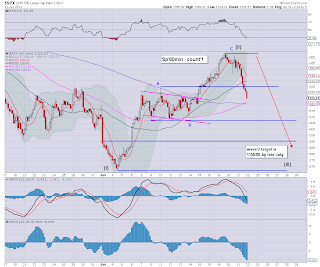 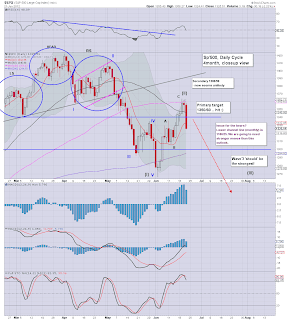 From an (hourly) cycle MACD (blue bar histogram) perspective we are now deeper on the cycle than at ANY time since last October I believe. We are due a significant 'brief' bounce to around 1335/40 sometime today.

We could even close moderately higher today, and that should be no concern for those bears looking at the bigger picture. The hourly 10MA (1344) will be primary intra-day resistance, however by end of today that will likely have fallen to around 1330.

I plan to re-short at the top of the next 15min cycle, preferably after at least 3-4 hrs today, probably no later than 2pm. I won't mind holding across the weekend.
--

*Across the weekend I aim to post a lot of the key 'big picture' charts, that should help clarify all the many trends in both equities/commodities that are defining this new wave lower.


ps.....we have Greece vs Germany (football/soccer match) at 2.45pm EST today. In Europe this will be a HUGE deal, some are calling it the 'bailout match'.
Posted by Trading Sunset at 13:17:00
Email ThisBlogThis!Share to TwitterShare to FacebookShare to Pinterest

A few little bonus notes....after my most recent semi-coherent ramblings. First, lets take a slightly broader look at the daily chart. There is of course the very clear H/S formation, then the break of support - with 5 waves down..and now what is probably the completion of wave'2 (blue)..and the start of 3.

For the bears, to confirm wave'2..we need a new low <1266. I suppose that's possible as early as the tail end of next week. Sp'1225 would make for a really nice minor' wave'1 of 5. There is some VERY significant long term trend support around 1225 on the monthly charts, so bears need to be careful around there. 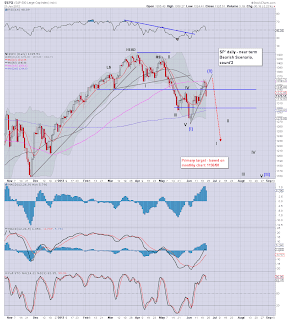 No one knows of course how far a given wave or how many waves might constitute the next multi-week move will be. However, the rough count above is something to start a few ideas from. I'd look to the July 6 jobs data as a critical marker point in the market.

I would guess the general wave itself - to reach the low sp'1100s will take 5-7 weeks. We'll certainly see some bounces along the way. From a MACD cycle point of view, we can easily fall for the next 2 trading weeks...without any concern of being oversold.

A good day for the bears. Reading around this evening, its amusing just how many "sp>1422 new highs coming" posts I'm still seeing! Those same people sure never saw today coming, and they sure don't see sp'1100s coming either.

The primary outlook - as based on the monthly cycle remains 1150/00 - by end July. I suppose it might take until early August. I don't much care either way. Price level is what matters, and I'll be shorting all the way down until we're in that range.

*also a break of VEU (world index chart) <35, will be a key chart to follow

Those bears looking for a break under the critical sp'1100 level, should look to some specific world indexes for more significant breaks. IBEX <5000 would be a VERY important one to keep in mind...Any break of 5k..and IBEX will hit 3k before end November. 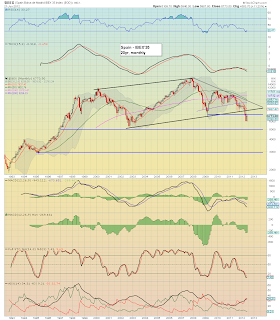 VIX 50+ would be another one of the top signs 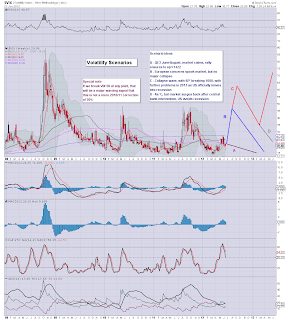 It remains (yet again)..a case of whether the Bernanke will initiate QE3..enough to stop the market breaking under sp'1100 - along with VIX 50+. That will all become clear around August time.

There is no econ-data due this Friday. So, it'll be all about the technicals, and any spurious 'EU rumours'. I'm seeking a Friday bounce to sp'1335/40. I suppose its even possible we'll see a 1.5-2 trading day bounce, but anything to a new high now seems crazy to imagine. As I keep saying... LOOK at the monthly charts! They 'demand' we close June at least <sp'1305, otherwise the bigger bearish outlook is likely not correct.

I will short EVERY spike/bounce/hyper ramp all the way to sp'1100 this July/August. Hopefully, I can capture more downside than I did today!