Despite some mild concern about the Russians meddling in the Ukraine, US equities are already significantly higher in March. Market looks set for the sp'1900s within the next week or two. The next FOMC of March'19 could be a key multi-month peak. 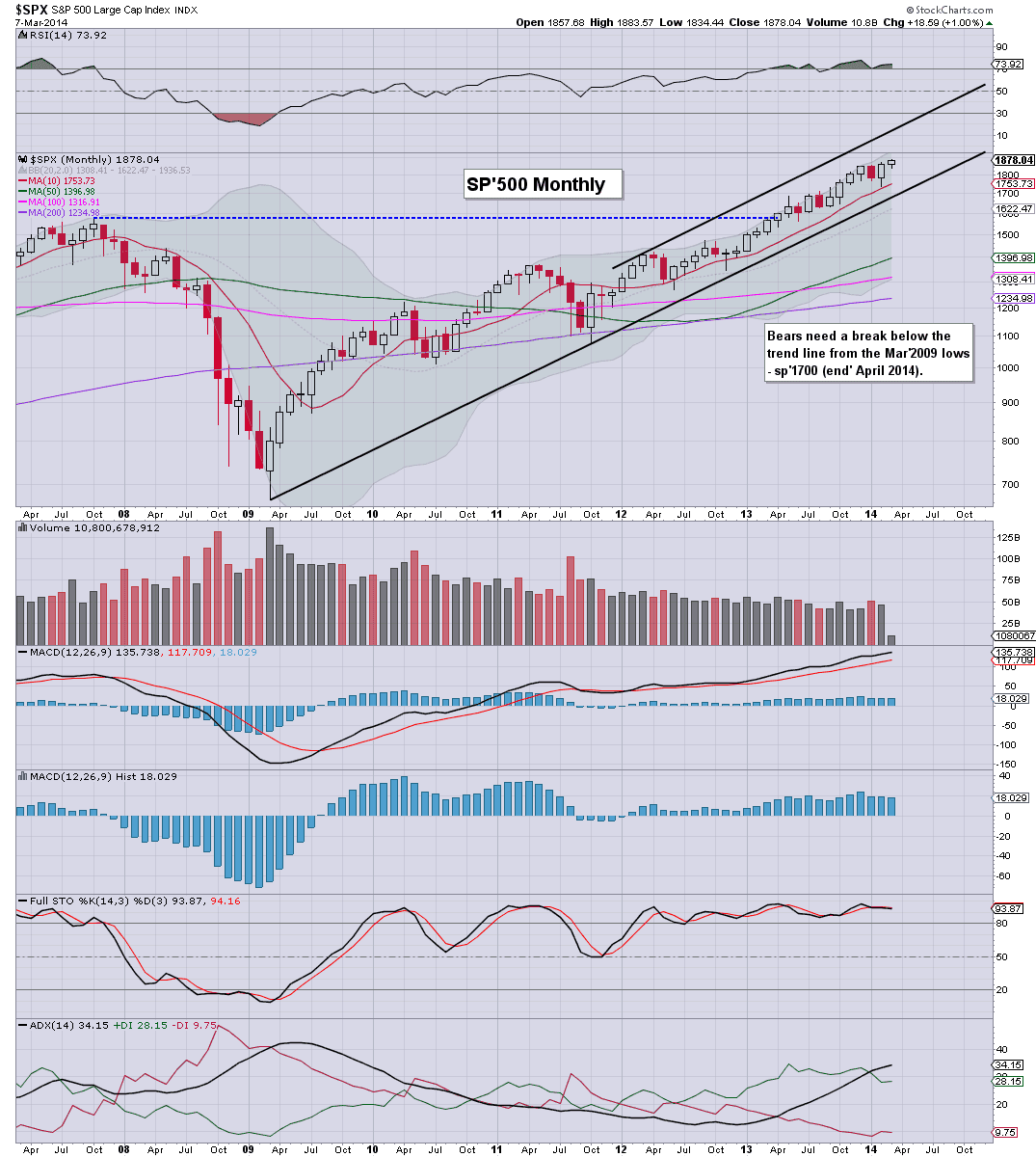 We're fast approaching the 1900s, and indeed, the only issue now is whether 2k will be hit this spring...or if the market will first see a major multi-month decline, with 2k delayed until next year. Considering the length of the ramp from Oct'2011 - we're now at month'30, I have to believe we're close to an intermediate top.

I remain highly suspicious that the next FOMC of March'19 would make for a natural early spring cycle peak. However, even if we do slip lower from there, unless it takes out the recent low of 1737 (141pts lower), there is still a threat of another multi-week wave higher in April/May.

Underlying MACD (blue bar histogram) cycle is a little lower than the momentum peak of Dec'2013, but still, there is nothing remotely bearish yet, not least with new highs being regularly hit. 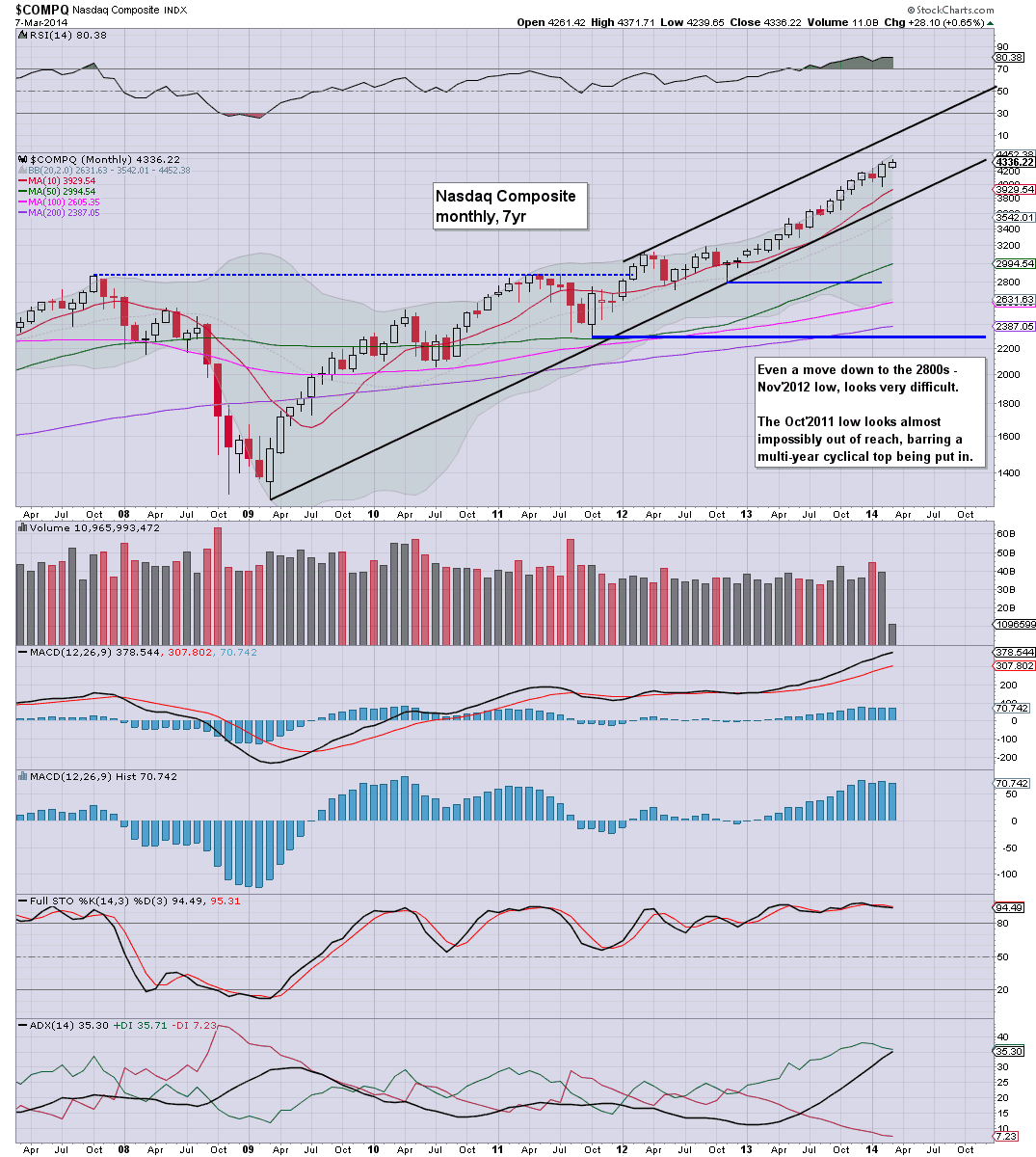 The tech sector continues to push higher, although the year 2000 bubble peak in the 5100s is still a very considerable way higher. I do not see the 5k level being hit this year, but certainly...in 2015. 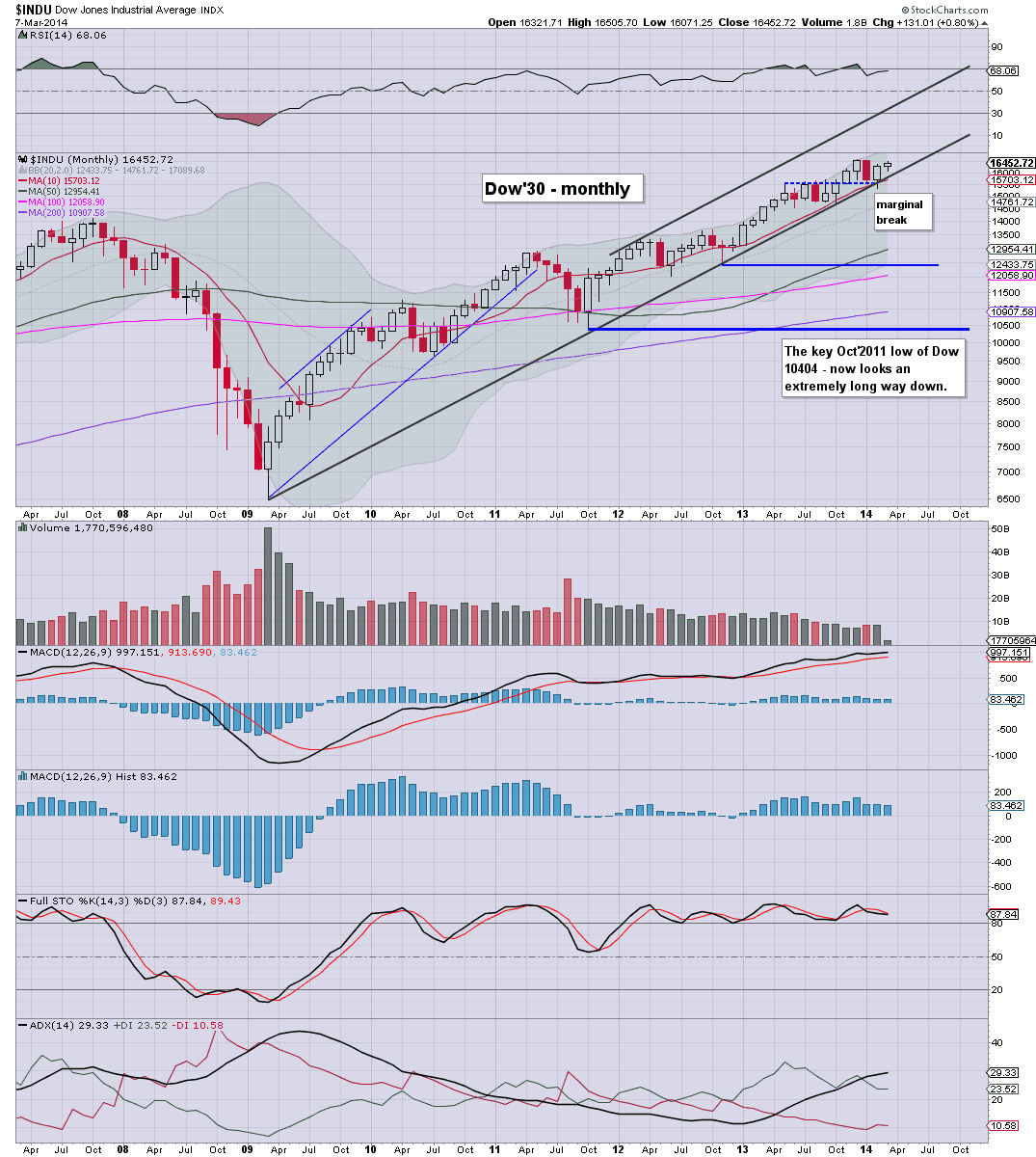 The mighty Dow is just 136pts shy of the historic high of 16588 - seen last December. A new high does seem very likely in the coming week or two, but 17k looks out of reach in the current multi-week up wave. Key support is the price cluster zone of 15500. Any monthly closes under 15.5k, and the bears will be starting to seize back control - for the first time since July/August 2011. 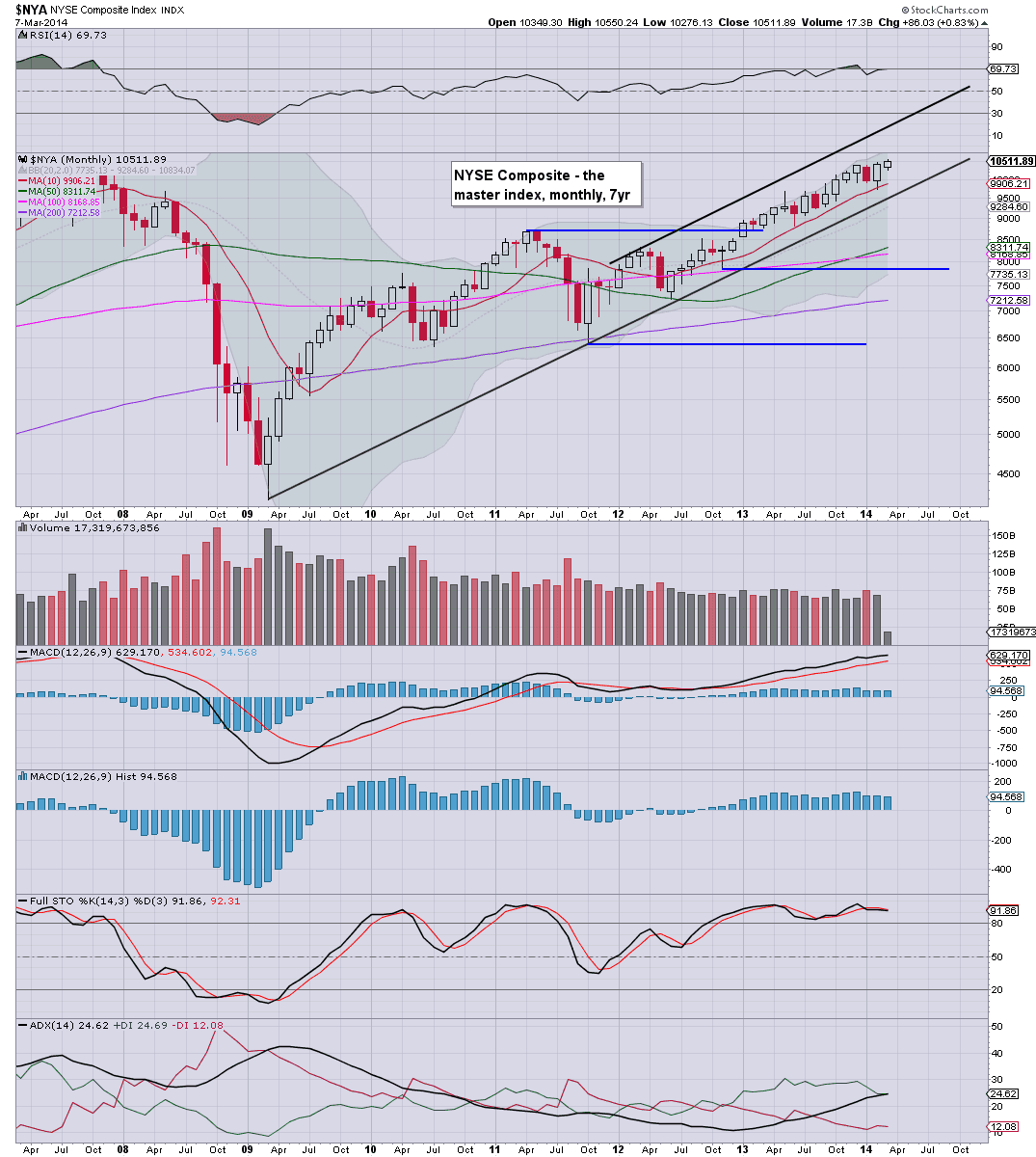 The master index is trading in historic new territory. There is viable upside of another 2-4%, but the 11000s do not look viable this spring, perhaps even until next year. 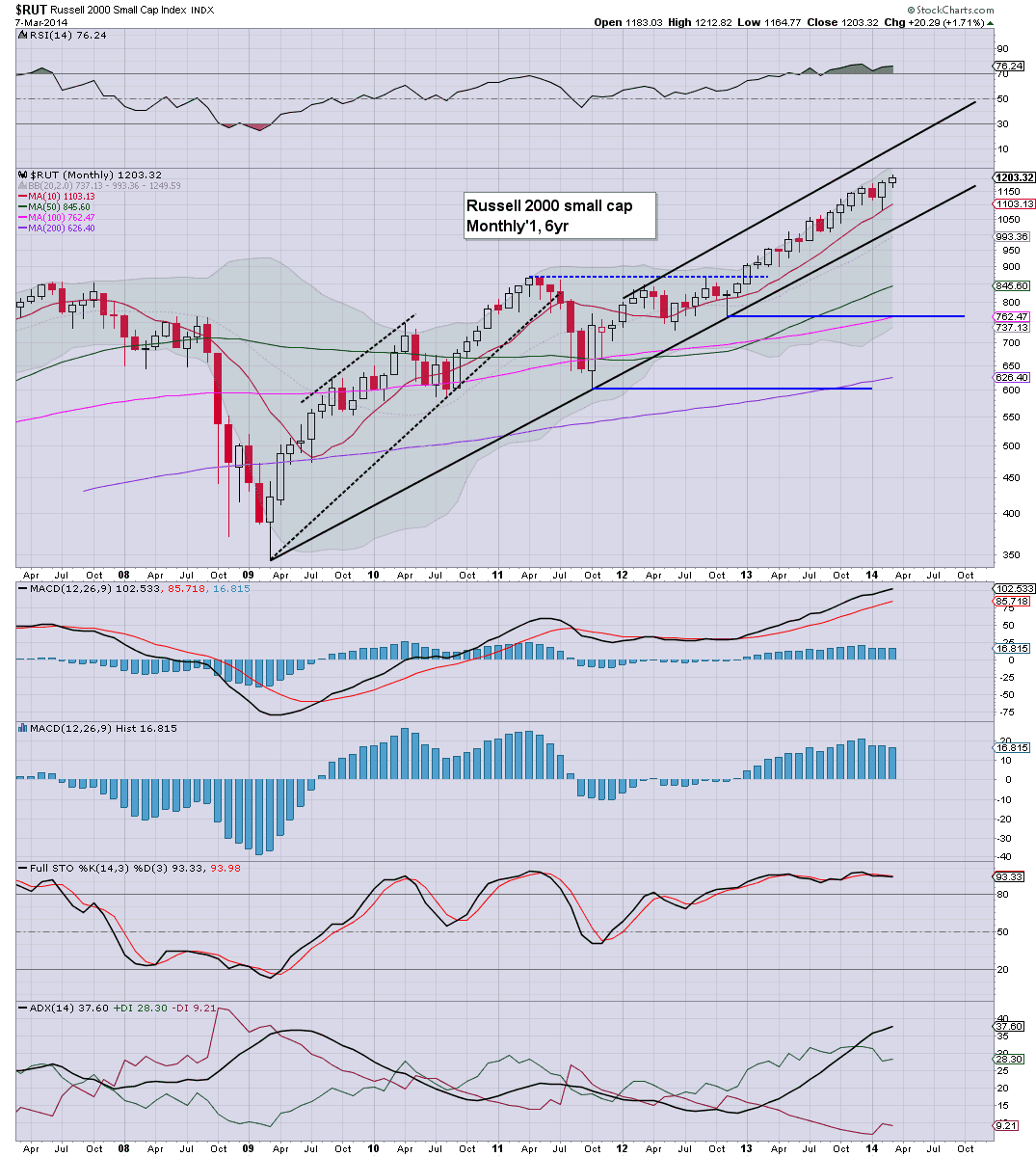 The second market leader has broken into the 1200s for the first time, and there is open air of another 3-5% in the immediate term. However, the 1300s look difficult to hit this spring. If the main market gets upset and we see a major rollover, best 'doomer bear' downside is the huge psy' level of 1000 - which is almost 20% lower. 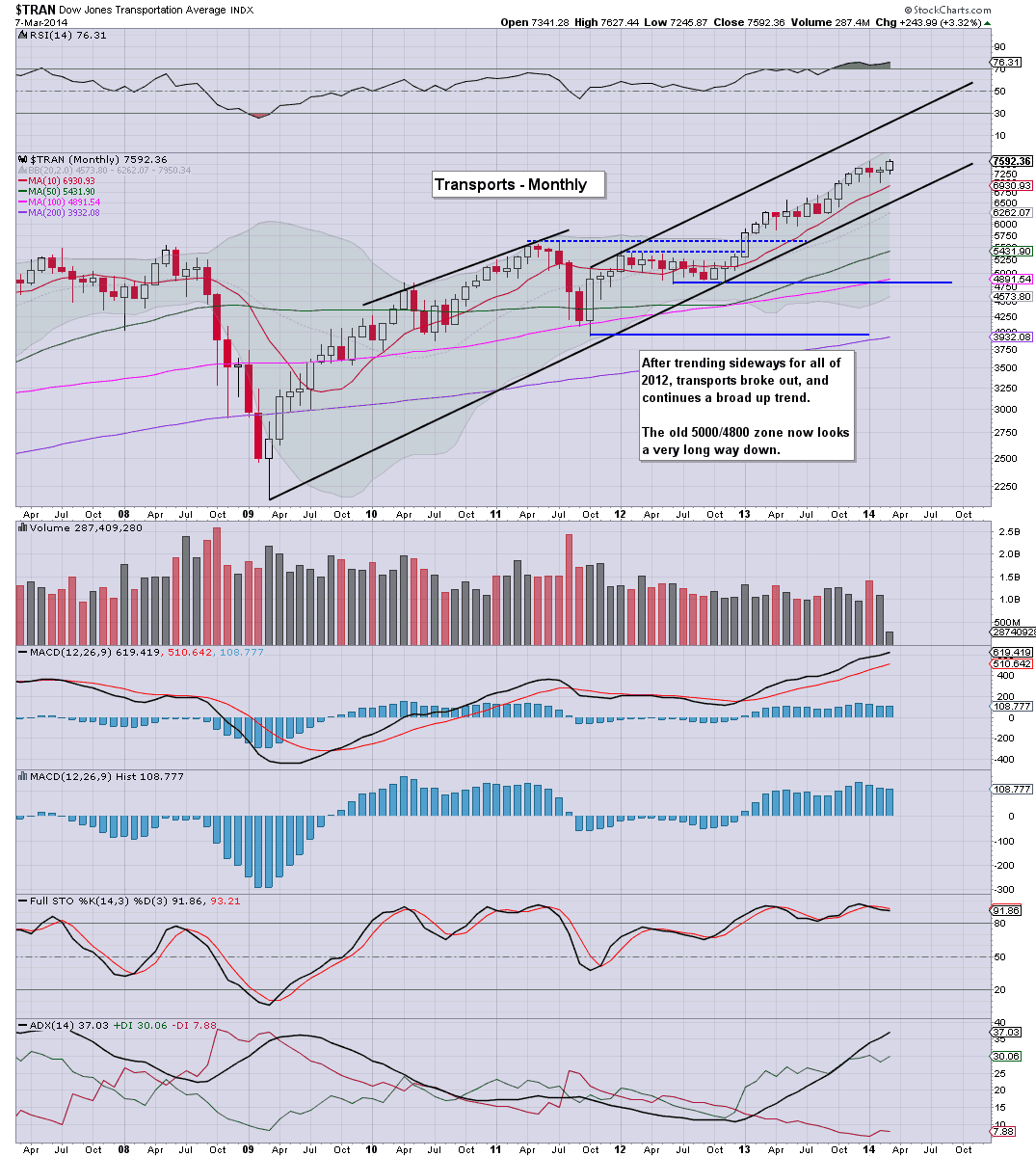 So, we're one week into the month, and most indexes are already significantly higher. The trend remains clearly to the upside. Indeed, it utterly bemuses me how anyone is trying to short the tiny little retraces that we occasionally see.

I sure won't bother attempting to capture 3, 5..or 10pts of downside. Seems overly risky, whilst the primary trend is still powerfully to the upside.

There has been a lot of talk along the lines of 'ohh...sp'500 is making new highs, but what about the Trans..or the Dow?'. Well, we now have the Trans in the historic 7600s, and Dow looks set to break new highs within the very near term. Dare I suggest that many out there are still cherry picking their indexes. I continue to endeavour to look at the collective of indexes, not just the weakest!

There really isn't much due next week. The only notable econ-data due is retail sales next Thursday, along with the usual jobs data. Aside from that...the market will be free to focus its attention on other things...perhaps the Ukraine?

It was another week for the equity bulls, having recovered from a mild panic on Monday. The sp'500 saw a very significant rebound from a Monday low of 1834 to breaking a new high of 1883. The big issue now is how will the market react at the next FOMC? 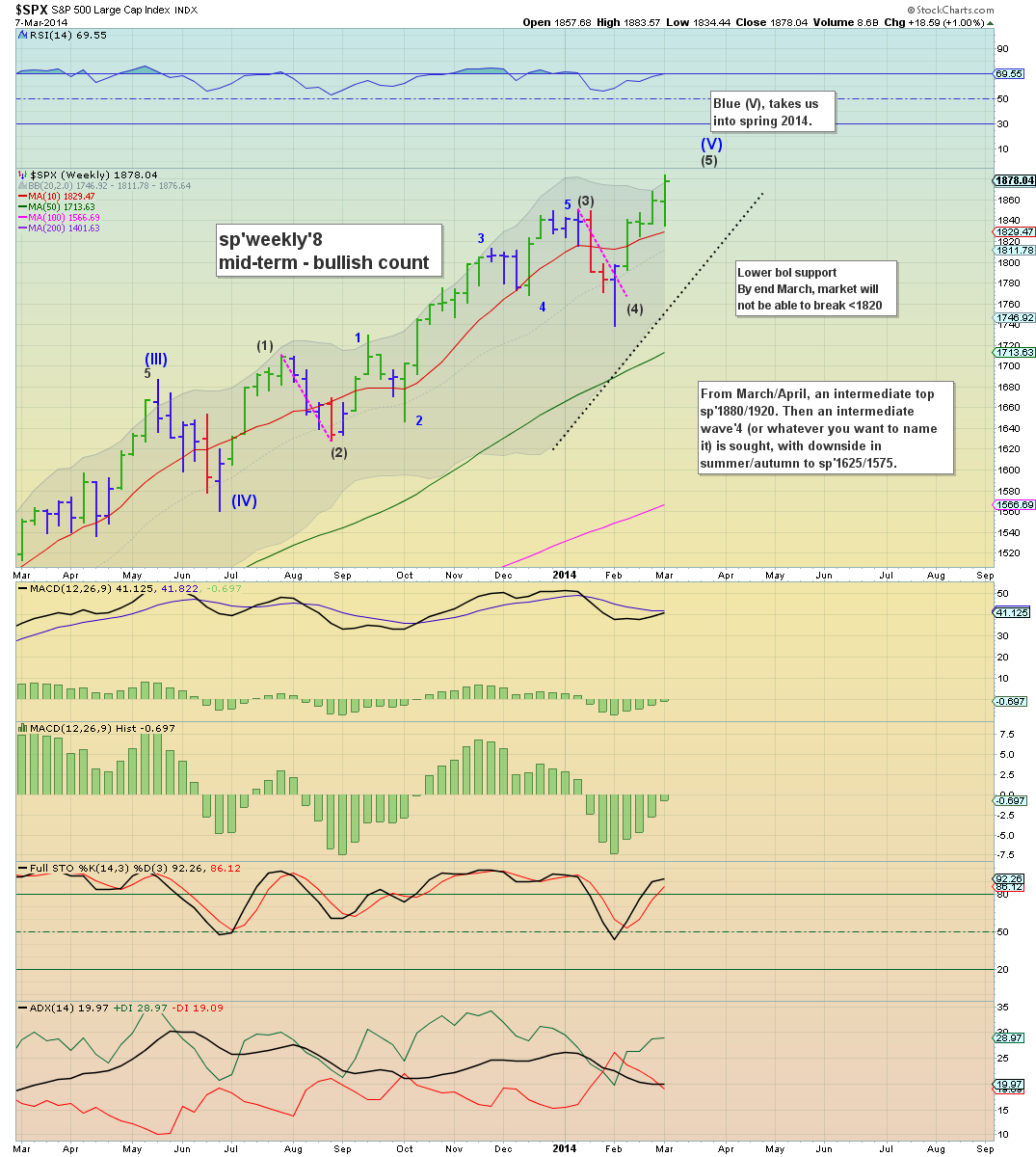 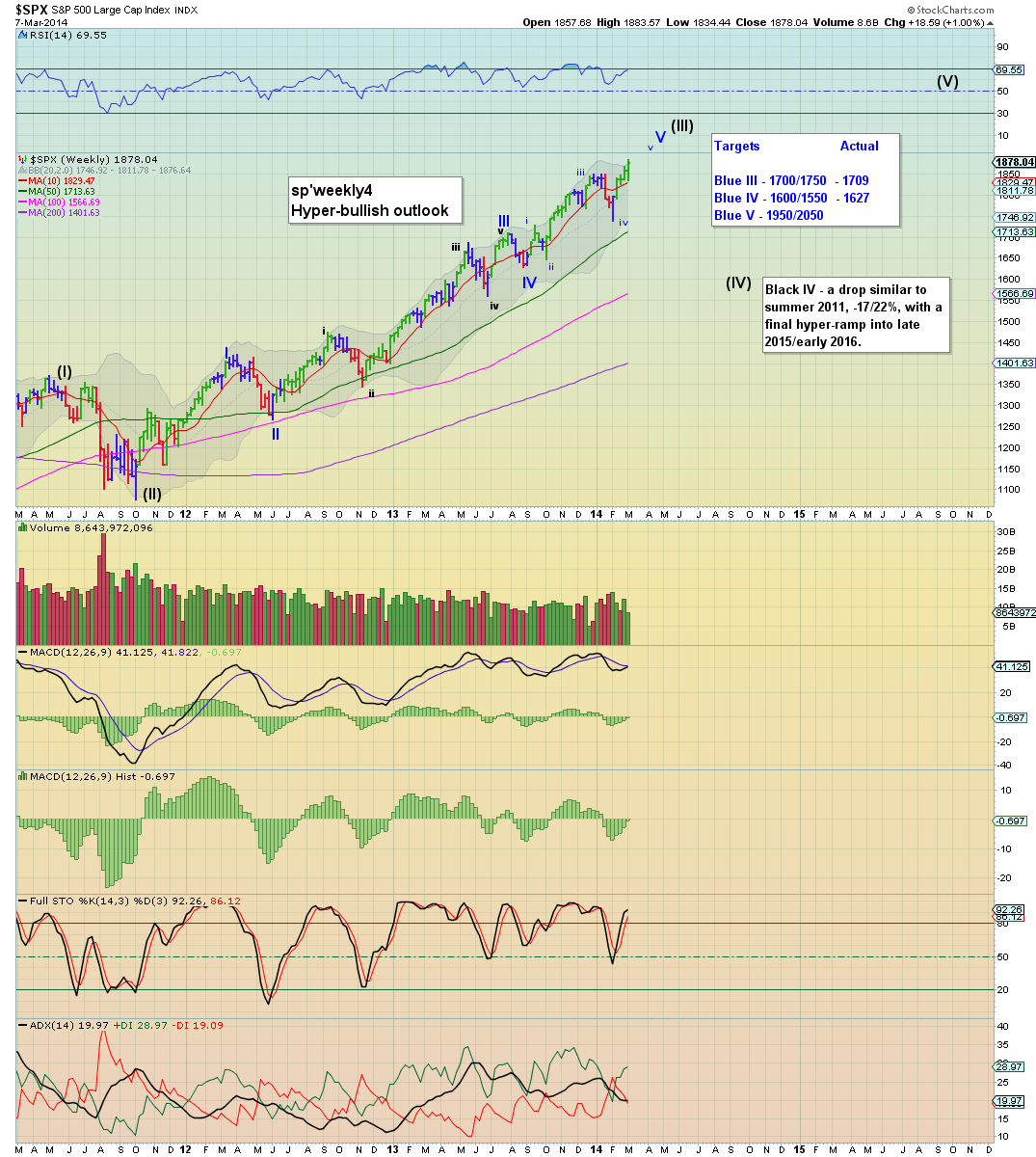 *note, that the upside targets on weekly'4, are unadjusted from last year. Right now, I'd look for the low sp'1900s in the current wave.
--

So, we're just 8 trading days away from the next FOMC.

Considering the jobs data today, it'd seem likely we will still see QE'taper'3 go ahead. That will likely bring monthly QE down to $55bn starting in April.

Chart weekly'8 - to my surprise, has been the one to follow since I first posted it last summer. If it continues to be right, then we'll see a key intermediate'3 top at the next FOMC, and from there, the first target will be a hit of the lower weekly bollinger. By end March, that will be around sp'1820, so...we might only be looking at a 5-6% decline in an initial down wave.

As ever though.. one day at a time. 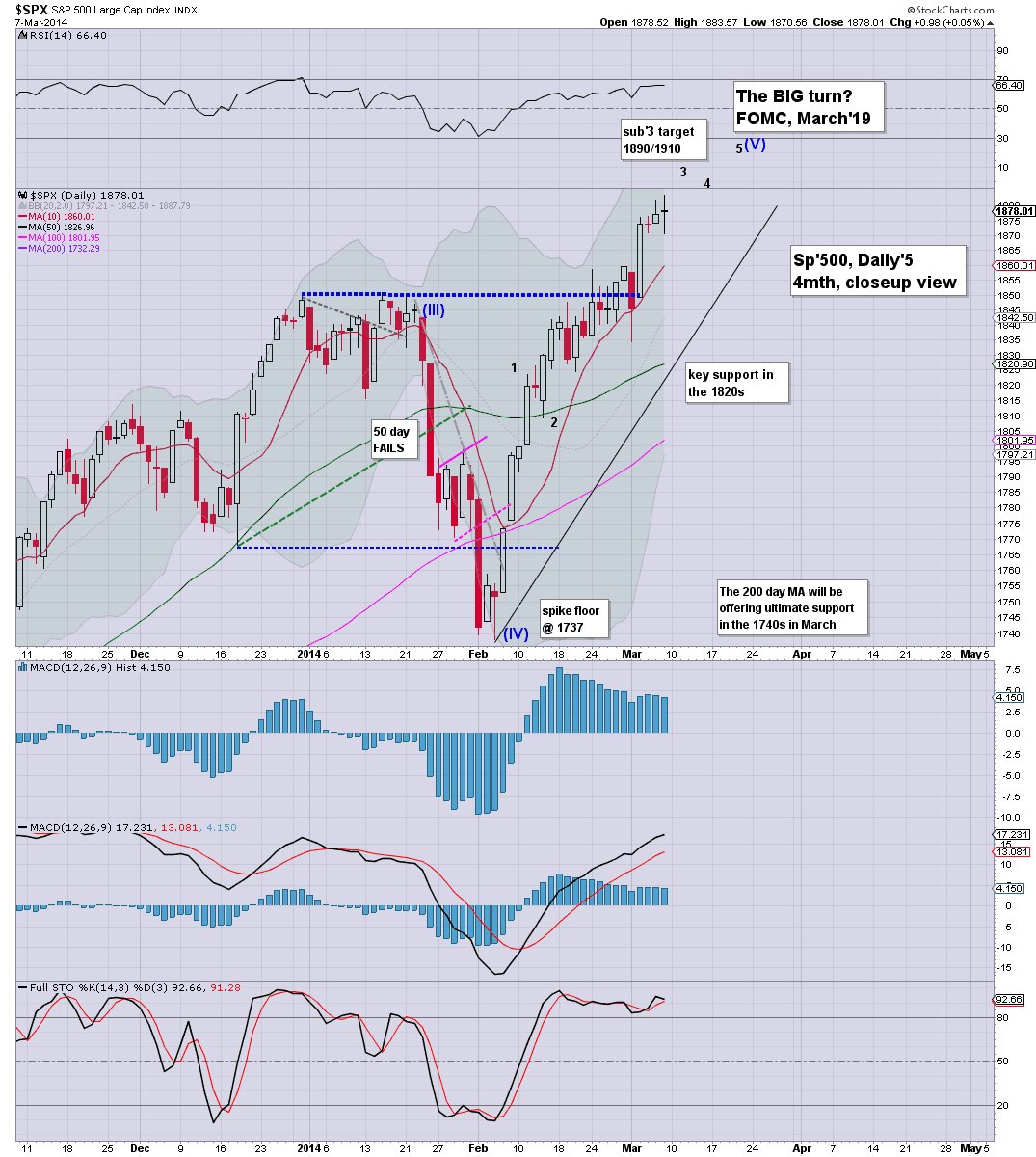 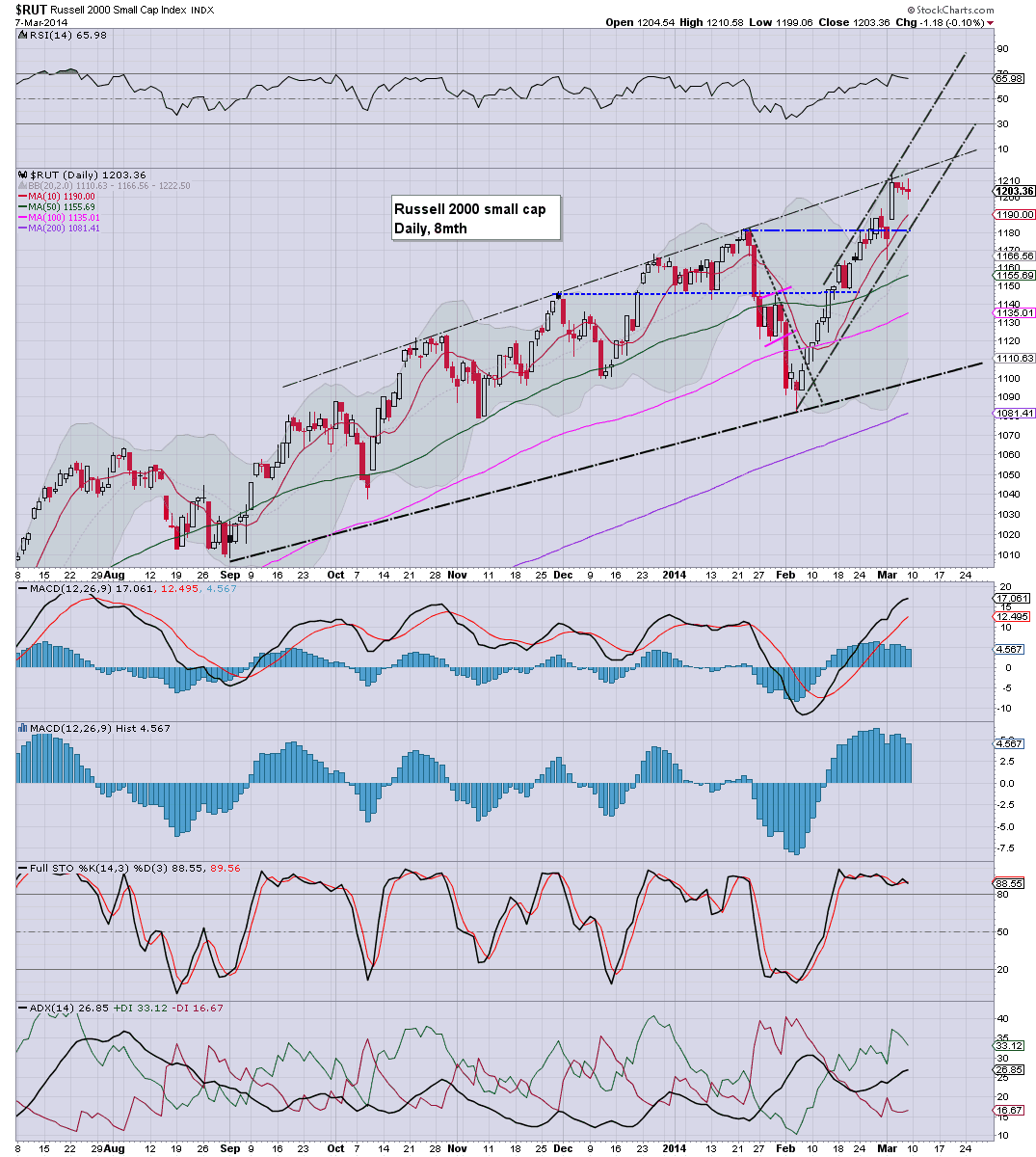 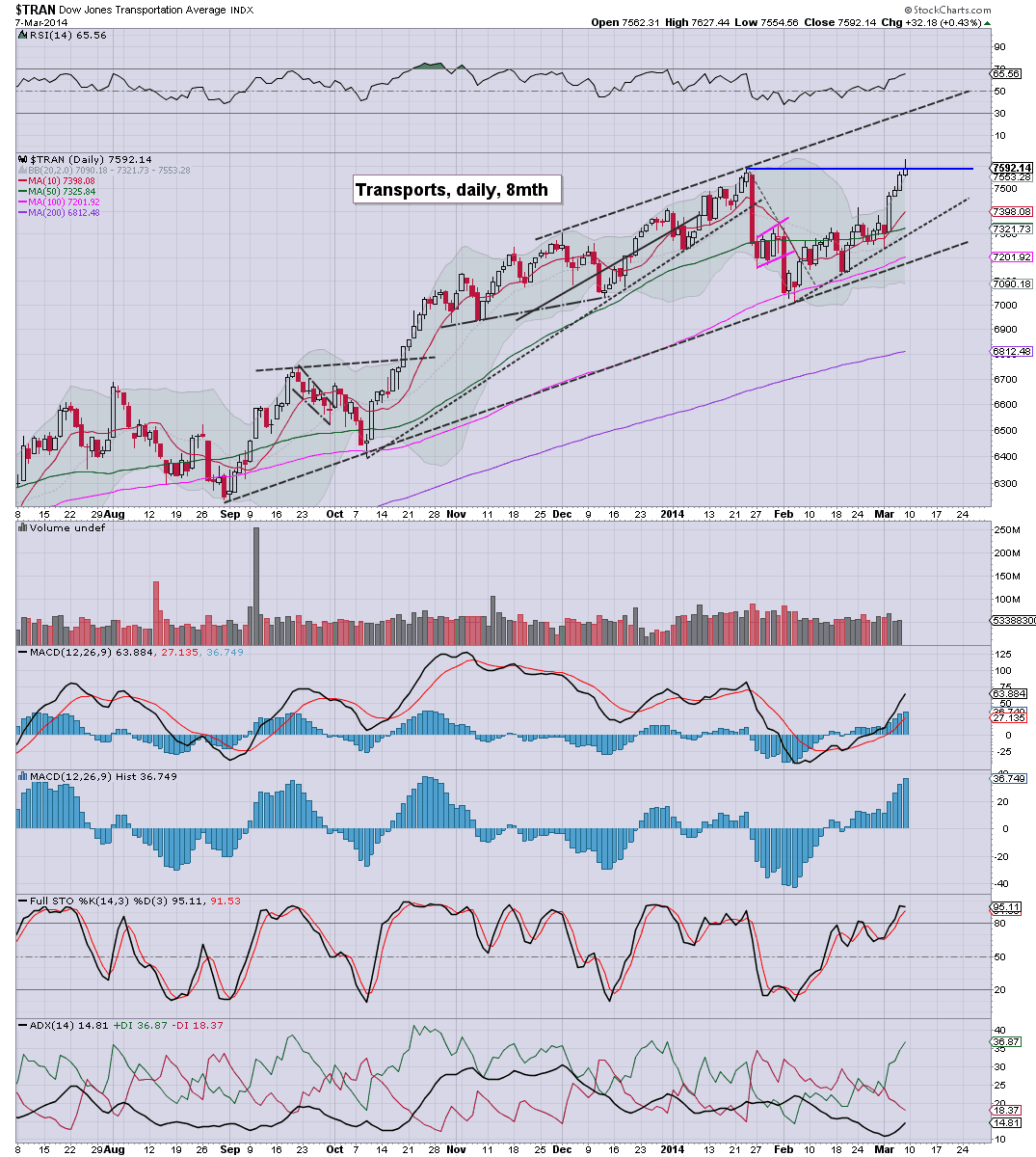 With the sp'500 and Transports breaking new historic highs this morning, there is nothing for the bears to be pleased about.

The Dow will surely also break a new high next week. My best guess remains that the Dow will fall a little short of breaking 17k, in the current multi-week up wave.
-
a little more later...
Posted by Trading Sunset at 01:00:00
Email ThisBlogThis!Share to TwitterShare to FacebookShare to Pinterest
Newer Posts Older Posts Home
Subscribe to: Posts (Atom)