The US indexes generally declined by around 1% this week, breaking the four week up cycle. The old leader - Transports, was once again the more volatile index, and slipped 2.3%. Near term trend looks moderately weak, with a rather conservative 2-3% of downside viable.


Lets take our regular look at the six main indexes... 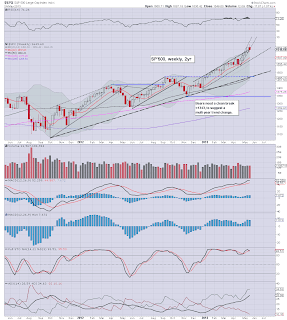 Even I was surprised early Wednesday morning, with the SP'500 snapped sharply higher, hitting a new high of 1687, as the Bernanke gave testimony to the US congress. Yet...the signs were there from the open. Oil was very unstable, and I sensed a reversal day was very viable.

Indeed, it turned out to be a classic reversal day, and with the move to 1636 on Thursday morning, we now have a very clear short term top.

Underlying MACD (blue bar histogram) cycle ticked lower - even though the net weekly decline was a mere 1.1%. We're still in positive territory, and it will likely take 3-4 weeks to go into a negative cycle.

As ever though, the ultimate problem remains that QE is ongoing, and that will be a huge prop to the market in the days, weeks, and probably... months ahead. 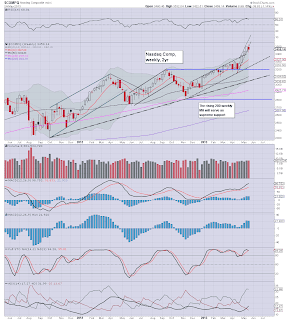 The tech sector fell 1.1% on the week. First support is the rising 10MA, around 3% lower. Those equity bears looking for much lower levels this summer need a clear weekly close <3200, if not 3000, the latter of which looks impossible whilst QE continues.

The mighty Dow barely fell this week, just 0.33% lower. The Dow is holding within the same channel that has held since last November. Indeed, the Dow could drop 400pts, and it would not break the lower channel. 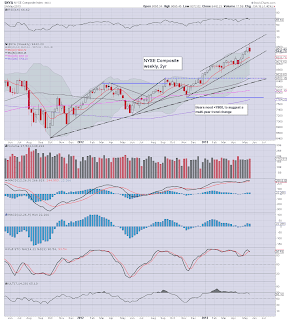 The master index fell 1.4%, but like the Dow, its comfortably well within its broad upward channel. Baring a break <9000 - around 5% lower, there is simply nothing bearish here. 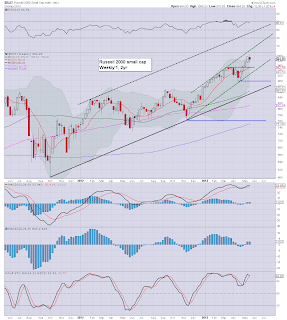 The second leading index fell 1.2%, but like other indexes, is holding within a VERY strong upward channel. The R2K could fall to 950 - a drop of 4%, and it would not do any serious damage to the overall trend.

Those bears seeking major downside this summer can't get excited until R2K is back under the mid-April lows, but that is now almost 10% lower! 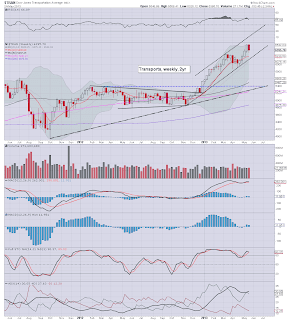 The Transports remain the most powerful, volatile, and is still the leader of the US markets. Tranny saw a somewhat significant fall of 2.3%, but its broadly holding together very well. Bears need to see a weekly close <6200, and I just can't see that happening any time soon.

So, the four week run is busted, and even though the market rallied after opening drops on Thursday and Friday, there is still some distinct weakness out there. A further 2-3% downside seems very viable next Tue/Wednesday. However, there are very big QEs next Wed/Friday, and that will surely help keep the market above the important sp'1600/1597 support zone.

I certainly can't see the market putting in a weekly/monthly close <1600 any time soon.

Indeed, with QE still continuing, how can the bears expect some kind of 'significant' down cycle to occur in the weeks or months ahead? Best guess - assuming QE continues is this... 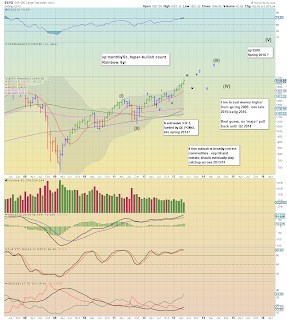 I realise the above chart is heresy to many out there. How can a self proclaimed 'permabear' suggest that kind of outlook? Well, that's just how I currently see things, so long as the Fed keep throwing 85bn a month at the US capital markets.

Let me be clear, if the Fed (for whatever reason) starts to trim QE in the second half of this year, then the market might indeed start some kind of major multi-month decline - much as we saw in summer 2011.

However, as many recognise, there would then be the constant threat of the Fed merely reverting back to the original QE levels. That is NOT a scenario I hope for. It would make for a treacherous market for those on the short side, not just at each FOMC meeting, but at any random time the Fed Chairman starts talking about 'open to increasing QE' again.

Frankly, I'd rather the Fed just continue their insane printing, rather than a few years of seeing them cut..raise..cut..raise...cut...raise.

When the market opens on Tuesday, there are a few things for it to deal with, inc' consumer confidence at 10am. On Thursday there is a second reading of Q1 GDP, market is expecting it unchanged @ 2.5%. There are 3 items on Friday, the most important being PMI data. Last month was a recessionary 49, market is looking for 50 this time. Anything under 50 again would be something for the doomer bears to get 'curious' about.


Trading for next week 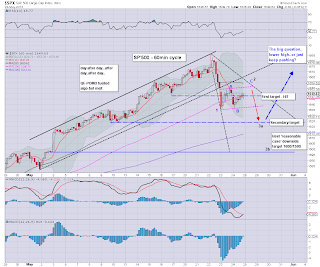 I will look to go short Tuesday morning, with a downside target of 1630/25, no later than early Wednesday. There is big QE on Wed' and Friday, so bears should be real careful about holding short across those days.

Further, I will consider Oil long, after the EIA report, Wednesday morning. Metals remain something I closely watch, but they are very unstable, and the primary trend for both is still to the downside - despite what the Gold bug community would like to believe.

Well, baring some Japan/Asia crash overnight Sun/Monday, I will be back on Tuesday morning.

Enjoy the long weekend.
Posted by Trading Sunset at 17:50:00
Email ThisBlogThis!Share to TwitterShare to FacebookShare to Pinterest

The main indexes opened lower, but once again we saw a recovery across the day, and that was without any help from the Fed! The sp' closed with a reversal candle, but put in another close just a touch under 1650. Near term downside for next week still looks to be 1630/25. 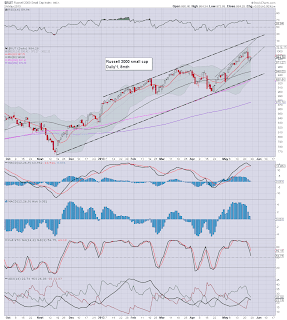 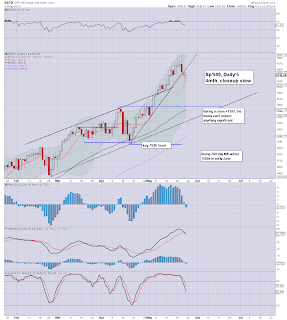 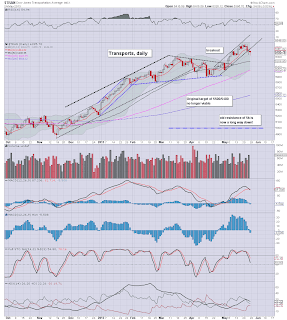 Another week comes to a close, and I have to say, it was pretty good. I was not expecting to short the indexes this week, but with the Bernanke speaking on Wednesday, the early signs of a reversal day made for a few good trades.

--
Perhaps most notable today, despite the intra-day recovery/bounce, the daily MACD (blue bar histogram) cycle again ticked lower for all indexes. Price momentum continues to swing to the bearish side.

It is largely why I will be considering a further re-short on Tuesday, not least if there is an opening gap higher into the low sp'1660s. I think there is good opportunity for a short trade, from 1660, down to 1630/25, perhaps into early Wednesday.

That's all for today..and the week. Enjoy the long holiday weekend.
--

*next main post, late Saturday, on the US weekly index charts.
Posted by Trading Sunset at 01:00:00
Email ThisBlogThis!Share to TwitterShare to FacebookShare to Pinterest
Newer Posts Older Posts Home
Subscribe to: Posts (Atom)