June was a very rough month for most world indexes, with severe declines of 16% (Greece) and 14% (China). Yet once again, the heavily QE-supported US and Japanese markets only slipped by 1.4% and 0.7% respectively. July looks set for at least some further downside.


Lets take our regular look at ten of the leading world markets: 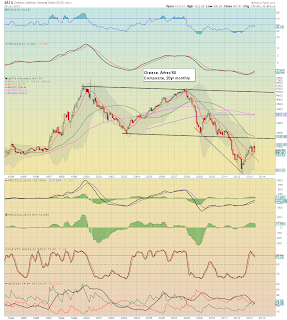 As many recognise, the Greek economy has already collapsed. It is merely living on the fumes of ECB bailout funds. The May spiky candle was indeed confirmed with a severe drop of 16%. This was the first monthly close under the 10MA since last September. 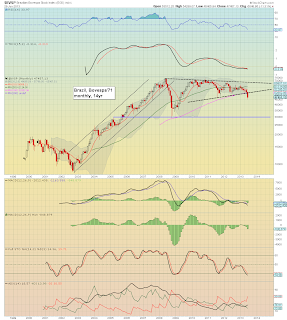 Perhaps the most important of the BRICs, the Brazilian market collapsed through support in June, closing -11%. The issue now is whether Brazil is headed back to 30k - the 2008 low, or if it'll manage to find support at an intermediate level. Arguably 40k looks likely to be hit, and that's around 15% lower. 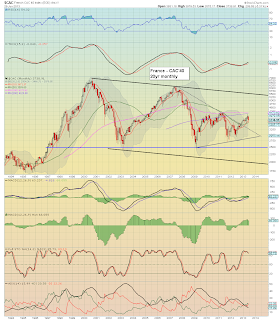 France continues to increase the strangle hold on those with money, and thus they are seeing a persistent outflow of funds. There is little reason to expect the current policy direction to change, indeed, it'll likely get much worse.

In terms of the CAC, the monthly drop of 5% is interesting, but its not big enough to confirm a trend change yet. Equity bears should seek downside to 3250/3000. 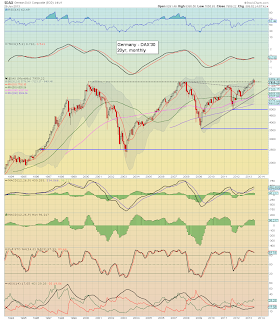 The powerhouse of the EU slipped 4.7%, far less than other world indexes, and that is entirely appropriate, considering it remains one of the strongest European economies. Equity bears need a monthly closing <7500, and that's still another 4/5% away, so how we close July will be important. 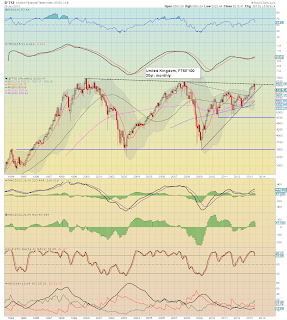 With continuing underlying econ-weakness, the FTSE slipped a rather significant 5.6%. The fall confirmed another classic topping spike in May. Equity bears need a monthly break of rising trend support, currently @ 6000. If July closes under that level, the next target is a rather more severe fall to 5500/5250. 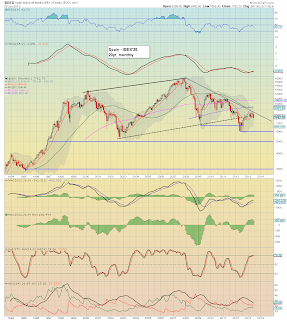 Arguably, the EUs ugliest PIIGS member, Spain fell a significant 6.7%. The monthly price pattern is a rather clear rollover that began at the start of this year.

Next downside target for the IBEX is 7k, that's another 10% lower. Any monthly closes <7k, and then the collapse door is open to 5k. For those doomer bears who are seeking a multi-month decline in the style of 2008, the obvious target is 3k. 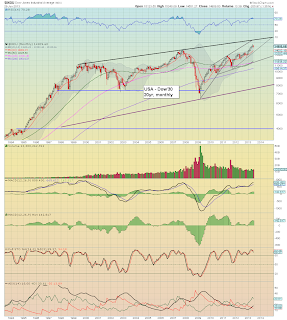 With continued QE of $85bn a month, it is no surprise that the US held up better than just about all other world markets. Even though there is now significant fear that the Fed will eventually end the printing, for now, the QE does indeed continue at full speed.

The monthly decline of 1.4% for the Dow was clearly a major disappointment to those bears who were watching huge declines in other markets. 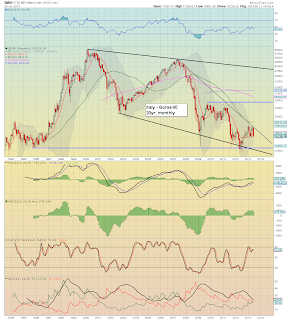 We have a clear rollover on the MACD (green bar histogram) cycle, and unless prices sharply rebound in July/August, the cycle is set to go negative no later than September - when the low 13000s would likely be hit. 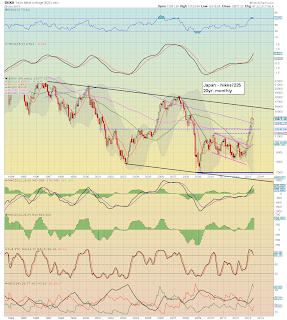 Japan was the strongest market in June, down just 0.7%, although it did see some initial downside in June. The QE continues in Japan, with the JCB effectively outright buying bonds, stocks/ETFs (just about anything they want). It is no wonder that the Nikkei remains largely in hyper-bullish mode.

Those seeking an inflationary 'moon-shot', should still be seeking a monthly close above key trend resistance in the 16000s. If the main world markets/economy at least 'hold together for the rest of this year, the Nikkei will break above 16k, and then there really isn't any limit as to how high the JCB can make it go. 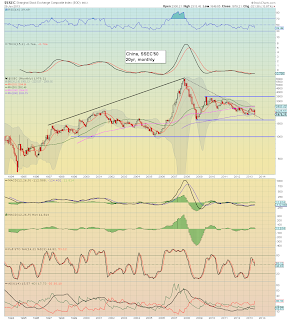 The rising empire of the world saw its market smashed 14% lower in June,  with the lowest monthly close since Dec'2008.

Equity bears seeking a new 'global financial shock', should look for the China market to put in a monthly close <1600. If that is achieved, there is pretty obvious downside to the ultimate psy' level of 1000 - taking the China market back to the 2005 and 1999 lows.

So, broadly speaking, we saw most indexes down rather significantly in June. It was the first major downside in about a year.

Depressingly, we have clear evidence that the QE-fuelled markets of the USA and Japan, are holding up much better. With no sign that either of their central banks is going to ease down, there is little reason to expect that either will see 'significant' falls, even if the other world markets collapse.

Right now, even if the Dow fell to 14k - with sp'1500, we surely won't go any lower from there, and will then merely battle higher again into the late summer/early Autumn.

Since the Bernanke 'reversal day' high of 1687 on May'22, the target for this wave lower has always been the lower weekly bollinger. 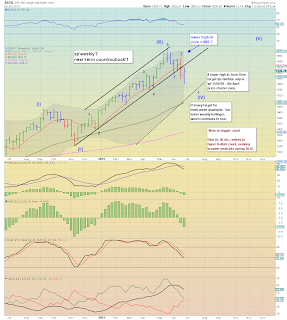 Its kinda interesting that mid-April low is a key level that many have been touting for some weeks. Also, probably important to keep in mind is that by mid July, the 200 day MA will be in the 1520s.

On any basis, by late July, a break <1500 looks effectively impossible.

First, its important to keep in mind that next week will be a very shortened week. Not only is Thursday closed entirely, but the market will close early on Wednesday @ 1pm.

There is rather important econ-data every trading day next week. ISM manu' on Monday, Factory orders on Tuesday, and ADP jobs Wed. Of course, what the market will really be focusing on is the monthly jobs number on Friday, market is seeking 161k gains, with a slightly lower rate of 7.5%. Those are not bold targets, and look likely to be hit.

As ever, it will be how the market interprets the data as to whether it will mean the QE will continue (in full) into 2014.

*there is significant QE on Monday and Wednesday.
--

The Friday close was a bit of a mess. How will we open Monday? Certainly, equity bears 'best case' outlook is a morning break <1590. Yet, the QE will be a serious problem, not least on the shortened Wednesday session. 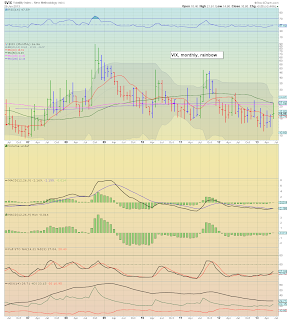 Certainly, this is an odd chart to highlight (who else looks at monthly VIX ?), but the point stands, the market is becoming somewhat more volatile. We closed June with the first green candle since last May.  Next upside target is the upper bol', with VIX 24/26. I think its something to keep in mind into mid July.

back on Monday :)
Posted by Permabear Doomster at 18:50:00
Email ThisBlogThis!Share to TwitterShare to FacebookShare to Pinterest

The bulls managed to turn the week in their favour, with the sp' +13.8pts (0.87%). The weekly close of 1606 was a significant 46pts above the Monday low. The multi-week down cycle is still broadly continuing, but the lower weekly bollinger target now looks a long way down. 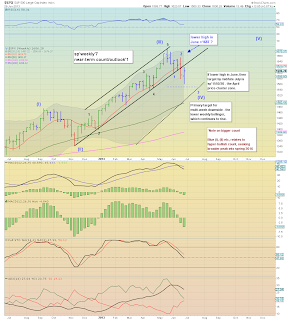 As I have been highlighting every day this week, I wanted to see another red candle by the Friday close. We came within 2/3pts of that candle turning red (as it was in the early morning).

So..a blue candle..but..at least its not green, and the bulls did not manage a close above multiple resistance in the sp'1620s.

-
I hold heavy short into next week, so...I sure hope we see some renewed weakness in the early part of next week!

*next main posting, late Saturday on the world monthly index charts.
Posted by Permabear Doomster at 04:00:00
Email ThisBlogThis!Share to TwitterShare to FacebookShare to Pinterest 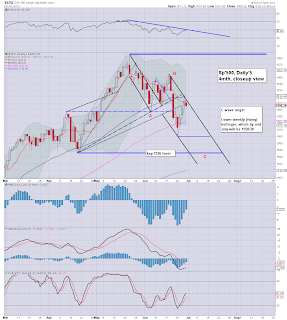 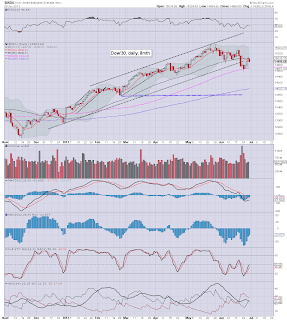 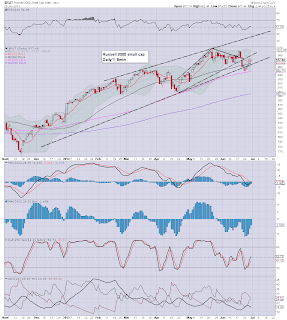 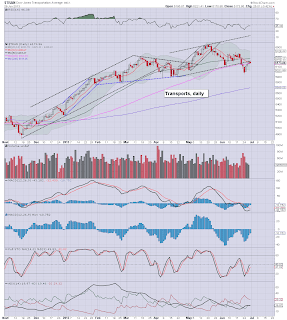 A bit of a messy day to end the week, and first half of the trading year.

The little sell off in the last few minutes of today is not entirely to be trusted, not least for 'month-end' issues.
--

Broadly, all the indexes are offering what might be a 3/4 day bear flag, but we'll need a significantly lower Mon/Tuesday close to have confidence in that scenario.

*I remain heavy short the indexes across the weekend, seeking an exit in the sp'1580/70s by next Wednesday.