All of the world indexes are significantly higher since the summer 2012 lows, by around 15-20%. Germany, Hong Kong, and the USA are leading the way for their respective continents, and there is easy open air of a further 5-10% upside for the first half of 2013.

Its been too long since the last World Index update, lets take a look at ten of the worlds main equity markets. 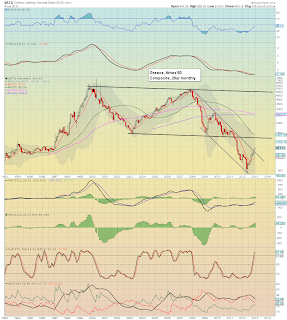 The Greek market has almost doubled since last summer, although it is important to keep in mind that it remains 80% down from the 2007/8 peak. We have a clear break above declining resistance, and the next key level is the big 1000, and then 1300/1500. 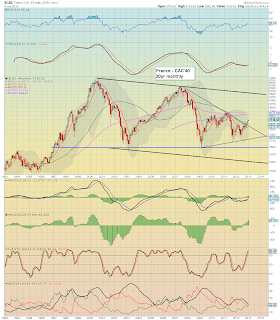 A clear break above declining resistance, and the next target is 4000/4250, which seems very viable by the spring. There is nothing bearish here. 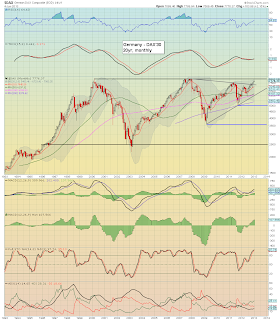 Germany remains the powerhouse of the EU, and is understandably also the strongest equity market. It is now very close to breaking the highs from 2007 - in the low 8000s, and is a mere 4-5% away. Outright bullish. 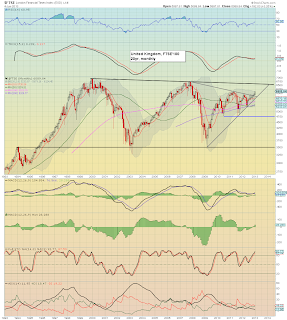 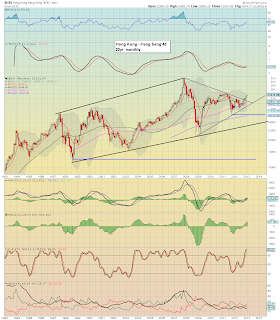 The tiny Asian offshore engine of China, HK has a clear breakout to the upside. Next level is 25/26k, around 10% away. Pretty damn bullish. 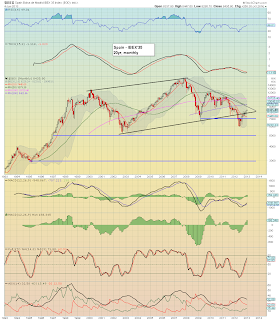 One of the two major PIIGS, and is now the weakest index out there. Yet, even the IBEX continues to climb, and is approaching the declining resistance around 9k. A break over 10k would be very significant, and suggest further upside to the 2010 highs of 12k. 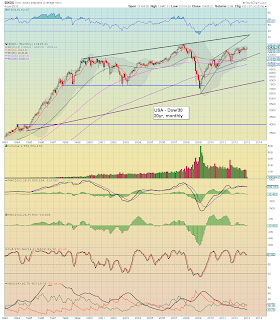 There is some bearish divergence, but still, the Dow is pretty relentless with the climb from the June lows. There is extremely strong support at 12k, and even more so at 11500. 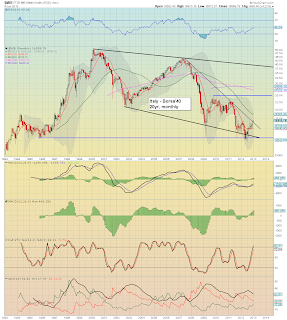 The EUs secondary major component of the PIIGS, Italy is lagging - just like Spain, but is now breaking through declining resistance. The next upside target is 19/20k, which is a good 15/20% higher. 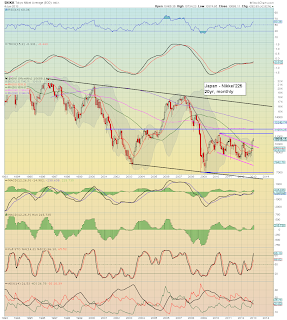 With the decline in the Yen, the Japan market has soared, and is now breaking away, first target is 11500/12000. A monthly close of 12k would be exceptionally bullish, and suggest there is a chance of 16k in late 2013. 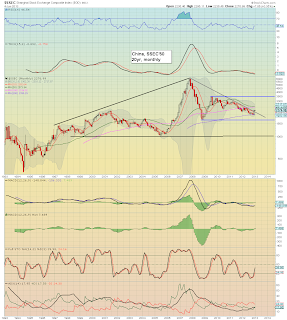 After a very consistent decline since summer 2009, the China market is breaking out. First target will be 2500/3000, the 3500 level would be very decisive. China is clearly fighting back after an earlier decline that threatened a move all the way down to where it had started at 1000.

There are index breakouts all over the world, and there is arguably easy upside of 5/10% for all indexes, although some look like 20% is very viable by the summer.

The PIIGS of Spain and Italy are clearly lagging, but even here, we have clear up trends from the summer lows, and there is NO sign of the trend levelling out.

Quite frankly, its surprising. There is of course continued bouts of new paper printing across the world, and that is clearly one factor that will be helping to drive up asset prices.

-We have breakouts above declining resistance on many indexes
-There is NO sign of a turn/levelling out phase
-There is good 'open air' of 5-10% for most indexes across the next 3-6 months.


US indexes - next week

It would seem we're going to continue upward. With the Rus'2000 and the Transports already well above their Sept' highs, the other indexes are very likely to follow in the next few weeks. Once we see sp>1474, that will open up a viable move in February to somewhere around 1490/1510, possibly 1520/30.

The looming issue of the US debt ceiling is already being discussed, but underlying momentum is now clearly to the upside. It will be very difficult for the bears to break the market much before late February/early March.

So, it has to be said...everything is now generally bullish. There are of course many economic 'issues' that remain completely unaddressed, but regardless of those system/structural economic problems, the world markets are indeed on the rise, with no sign of stopping.

back on Monday
Posted by Trading Sunset at 19:04:00
Email ThisBlogThis!Share to TwitterShare to FacebookShare to Pinterest

With the very strong start to 2013, the weekly and monthly charts have now flipped to outright bullish. With the Rus'2000 small cap' at historic highs, and the Transports breaking out of a year long trading range, we now have a very clear upward trend. 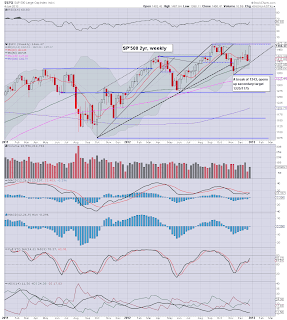 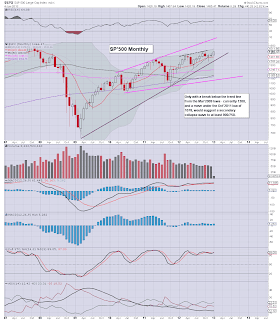 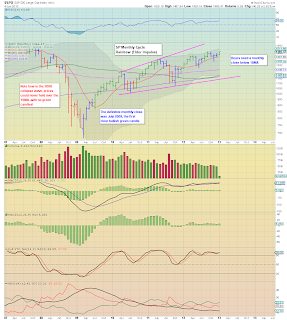 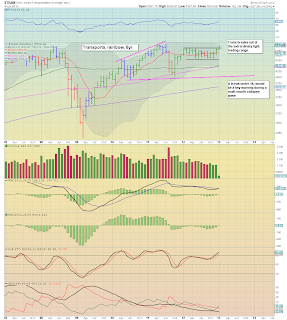 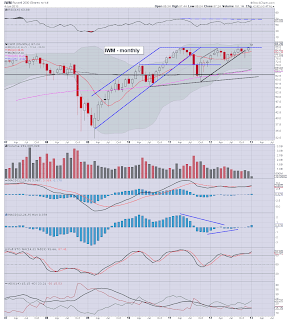 Suffice to say, we have seen the big monthly charts turn clearly upward. All the bearish momentum that began with the mid-September QE highs..is now completely gone.

With both the R2K and the Transports displaying clear breakouts, I've little doubt the SP, Dow, and Nasdaq will be playing catchup into February.

i will dare suggest that the obvious upside target is a touch of the upper bollinger band, which is currently at sp'1511..and that is rising. By early February, it could easily be around 1520/30.

The doomer bears should of course keep things in perspective. Were the market to max out around 1510 in February, that is only 45pts higher, a mere 3%. Indeed, that sort of increase is easily possible within a 2-3 week time frame.

Having exited @ 1398 at the Monday open, I'm choosing to sit back..and just watch. A re-short in the low sp'1500s in early February is a very appealing trade idea right now.

First things first though, lets see if the bullish maniacs can melt this market above the psychologically huge 1500 level. It won't be easy, but so long as there is not too much talk about the debt ceiling, the market will very likely manage it.

*there will be a weekend posting, late Saturday, probably on the world index monthly charts.
Posted by Trading Sunset at 04:00:00
Email ThisBlogThis!Share to TwitterShare to FacebookShare to Pinterest

The indexes closed higher for a fourth consecutive day, lead once again by the transports, and the Rus'2000 small cap. We have clear breakouts, and there is some buying behind it. The near term trend remains unquestionably to the upside. 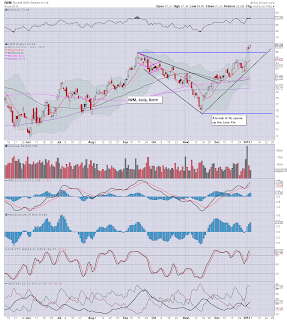 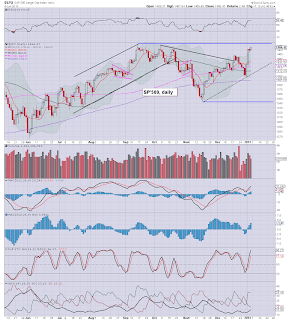 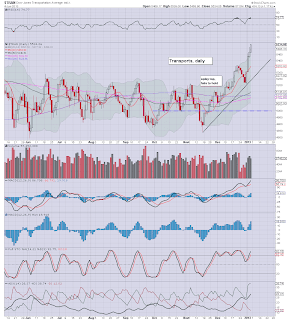 The Monday open of sp'1398 seems like a long term ago now, and considering we closed the week @ 1466, the bulls can justifiably feel pleased with how 2013 has begun.

The most bullish aspect of all has to be the Rus'2000 index, which has closed at new historic highs. With the transports closing comfortably in the 5500s, it really has turned out to be one mighty bullish week.

The SP/Dow are lagging a little, with the Nasdaq a little further behind.

Considering everything, it'd seem we'll somehow claw our way higher to at least sp1490..if not 1510/20 by early February. At that point the VIX would very likely be in the 12s, if not the 11s.

It will be at that point that a re-short would seem very much more viable.

The debt ceiling issue - which caused havoc in July/August 2011, will very likely cause at least some 'moderate concern' this coming late Feb/March.