With the main indexes seeing some latter day weakness, the VIX managed a micro-rally into the monthly close, settling +0.7% @13.75. Across the month, the VIX declined 17%. The VIX looks set to remain in the teens for the remainder of the year. 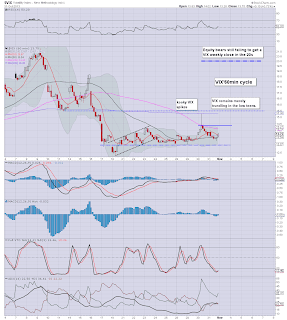 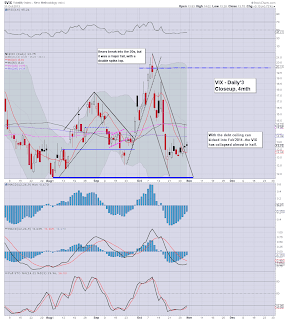 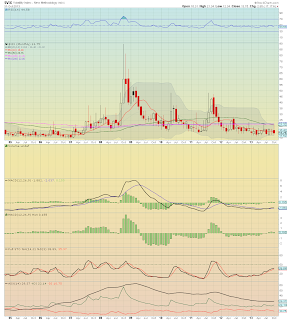 *I don't think I've posted a monthly VIX chart in a very long while, but I think its worth keeping things in perspective. Market volatility has collapsed, and just like in 2005..it could be another few years before the market really freaks out again.
-- 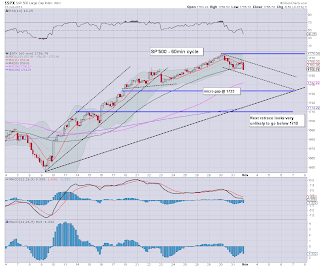 ..and October comes to a close.

For many out there, it will be another month to forget and complain about.

I'm bearish to the sp'1730s, but...considering the bigger cycles, further multi-month upside looks a given into next year.
--

The usual bits and pieces across the evening.
Posted by Trading Sunset at 20:02:00
Email ThisBlogThis!Share to TwitterShare to FacebookShare to Pinterest

The main indexes are holding moderate gains, but under the recent sp'1775 high. It has been a remarkably bullish month, with most indexes around 5% higher. Metals are closing the month weak, with Gold -0.4% for October. Oil saw heavy declines, -6% on the month. 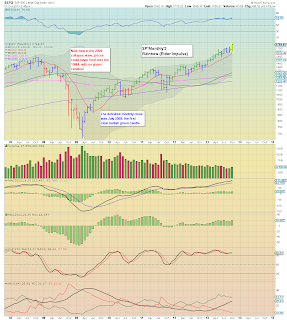 Another month for the equity bears to forget.

All the talk of debt ceilings being breached, of a near end of the world zombie apocalypse, were indeed just the usual bearish hysteria/nonsense talk.
-

Another 5% for the bulls...and the world equity index charts are STRONGLY suggestive of a further 10/15% into spring 2014.

I realise, and do understand that some of you think the sp'2000s are not likely before the next major drop..but really..the current trend IS unquestionably to the upside.

There will be a time to launch heavy shorts, but...that is probably another 4-6 months away, and even then, it will be somewhat risky.
--

FB, on the 5min chart, a few good examples in there of how a momo stock trades intraday, not least the opening spike-floor reversal candle. 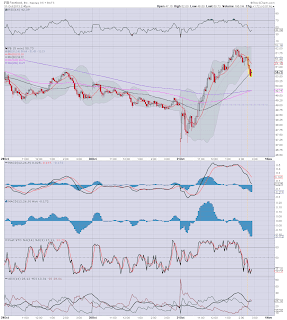 You can see FB is essentially close to flooring on the micro 5min cycle, and will likely battle higher into the close.


3.16pm..we have some distinct weakness this hour..and everything is now bearish into Friday..and to close the week. 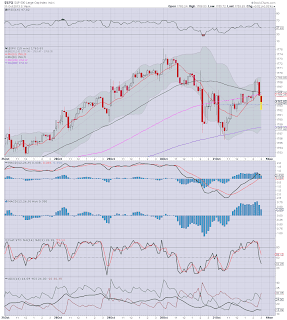 The 1730s are viable tomorrow..if the rats get twitchy into late Friday afternoon.
-


3.50pm...rats bailing into the close. Looks prettyt good for the bears for tomorrow, but then..so did early October.
Posted by Trading Sunset at 18:49:00
Email ThisBlogThis!Share to TwitterShare to FacebookShare to Pinterest 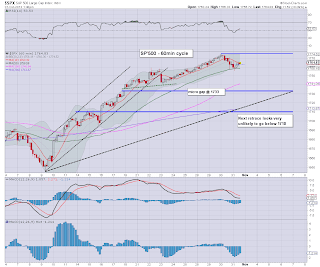 Not much to add, although there remains a lot of interesting action in individual stocks.
--

FB continues to recover from the opening drop. 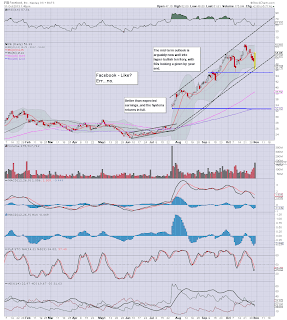 That is one hell of a bullish engulfing candle. Upside into the 60s looks..pretty easy by early December.

Reasonable downside...of around 30/35pts..to the low 1730s..within a few days.
Posted by Trading Sunset at 17:50:00
Email ThisBlogThis!Share to TwitterShare to FacebookShare to Pinterest

The market is seeing a natural minor bounce, with the sp'1775 Wednesday morning high unlikely to be broken for some days, even a few weeks. VIX is still telling the story that the market remains absolutely fearless. Gold slowly sliding..now -$21 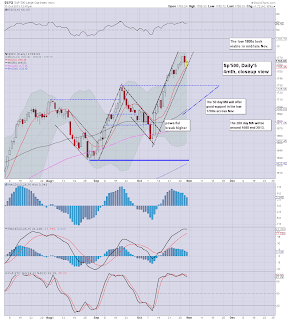 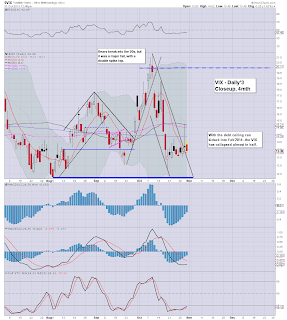 Just 3 hours left of the trading month, and a close in the sp'1760/50 zone looks likely, which will make for a very strong month.


--
Interesting action in the momo stocks, which are seeing some interest. 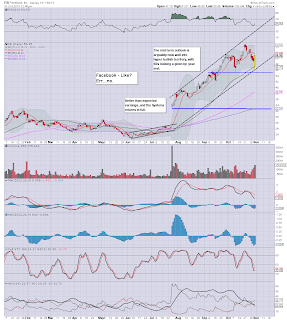 $60s remain the upside target by year end, not that I will be meddling in any of the 'hysteria' stocks.


1.34pm.. FB accelerating...all the bears getting nuked...can it get to 54/55 by the close, ..crazy market!
Posted by Trading Sunset at 16:49:00
Email ThisBlogThis!Share to TwitterShare to FacebookShare to Pinterest

The market is seeing a minor bounce after the initial drop from 1775 to 1755. The high should hold, with renewed weakness in the first week of November. Best guess remains, sub'1700s are still off the agenda for remainder of this year. The VIX strongly supports that view. 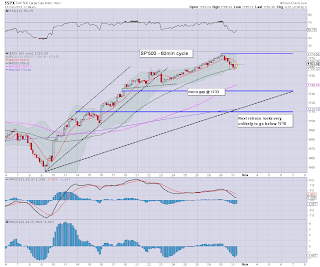 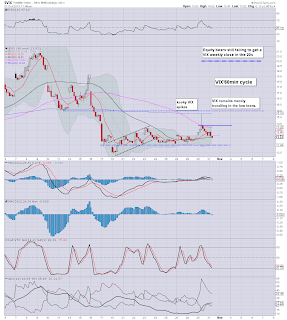 *VIX confirming a market that is supremely confident. Even VIX 15/16 will be difficult, with sp'1730s.
-

time for lunch !
Posted by Trading Sunset at 15:51:00
Email ThisBlogThis!Share to TwitterShare to FacebookShare to Pinterest

The main indexes are holding moderate declines, after a PMI number that showed the strongest jump in over 30 yrs. Metals remain very weak, with Gold -$18. Equity bears look set to kick the market lower across the next few days, but anything <sp'1730 will be real difficult. 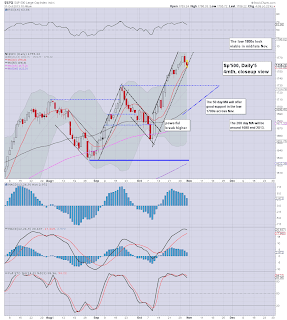 However, considering it is end of the month, there is likely to be some end month chop across the afternoon. 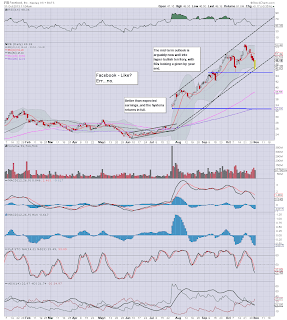 momo stocks all jumping, FB, NFLX, all the usual suspects.
Posted by Trading Sunset at 14:50:00
Email ThisBlogThis!Share to TwitterShare to FacebookShare to Pinterest

10am update - no one believes the number

The sp'1775 top looks pretty secure, at least for some 'days'. Primary downside remains the low 1730s, but that probably won't be hit until early next week. Precious metals are weak, Gold -$18, Oil is flat. Regardless of how we close today, the monthly charts all look set to close the month strongly. 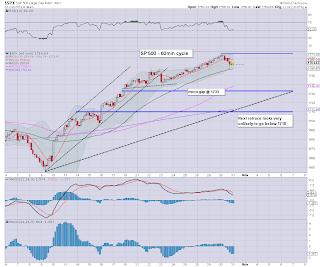 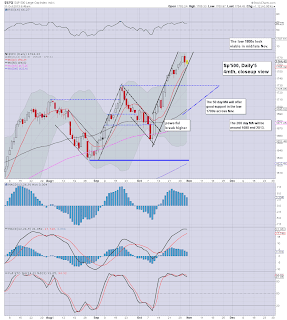 So. market opens a little weak, but bears look set to struggle, even to drop just a few percent, and we're already seeing the indexes flip a touch green.

Despite the PMI number, I don't think indexes can break >1775 in the immediate term.
- 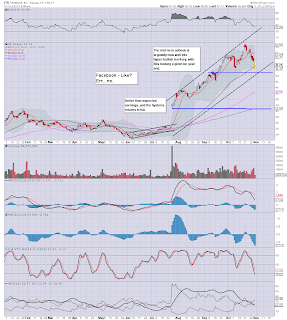 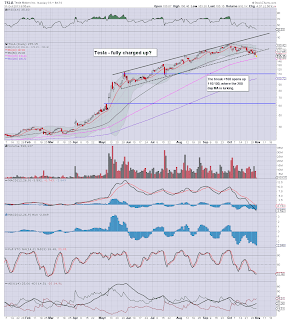 stay tuned
Posted by Trading Sunset at 13:52:00
Email ThisBlogThis!Share to TwitterShare to FacebookShare to Pinterest

Good morning. Futures are flat, we're set to open at sp'1763.Metals are especially weak, with Gold -$15. Oil is a touch a lower. Equity bears look set for continued market weakness, near term downside looks to be the low 1730s by early next week. 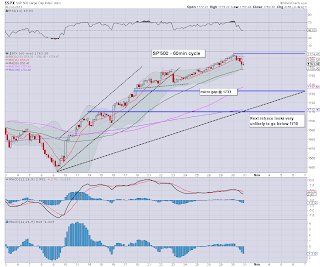 Sp'1775 certainly looks to be a near term high, but with continuing QE, I can't consider it a key multi-week/month cyclical top.

Interesting story from Bloomberg. It would seem the 'crisis cash' mountain between all the central banks will be kept intact. I guess this is a good thing for the stability of the financial system, but still, it doesn't exactly inspire me with confidence that even the printing maniacs still seem twitchy about things.

Have a good day everyone!
-

It would seem everyone is agreed FB is headed to 46/44 zone, before it finds support. It could certainly hit that zone today, and then reverse.
-

*equity bears will no doubt be disappointed with the indexes - after overnight weakness, but still, I don't think 1775 will be broken now, for some days, maybe even a week or two.


9.47am.. Chicago PMI: 65.. .Huh?   vs. 55 expected.    Santellli notes on clown finance TV, that number looks....bizarre. Someone type the press release wrong?
Posted by Trading Sunset at 09:00:00
Email ThisBlogThis!Share to TwitterShare to FacebookShare to Pinterest

Not surprisingly, the FOMC decided to continue QE at $85bn a month, along with ZIRP. There is a likely minor retracement now underway, but it would seem the US - and indeed, world equity indexes will continue broadly higher into spring 2014. 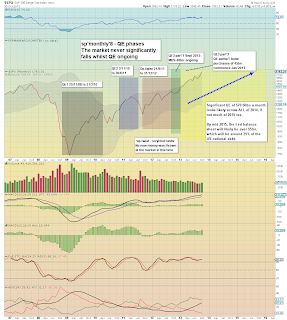 Another FOMC, where the remaining equity bears were again disappointed (if not disgusted) that the QE fuel of $85bn per month - along with ZIRP, will continue.

*The next FOMC is Wed' Dec'18, and as many recognise, it is extremely unlikely the Fed will change policy during the festive holiday.

Worse, equity bears will be lucky to see even a minor QE taper next year - of around $70bn, by late spring/early summer.

I'd not normally highlight an individual stock here after hours, but I think this one is worth it.

First, see a great video..which features none other than Mr Bollinger himself! 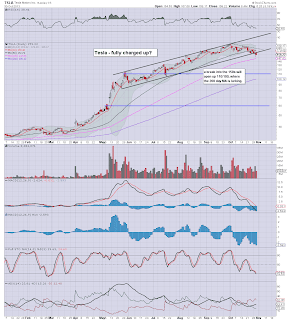 With the break <$160, I'm guessing TSLA will slip to the 110/100$ zone. That will probably take a few weeks, but earnings are next Monday, and if it disappoints, I'd not be surprised to see a monster 15/20% overnight drop.

Thursday has two key pieces of econ-data. The usual weekly jobs data, but more importantly, the latest Chicago PMI, market is seeking a non-recessionary reading of 55.0.

*there is no QE tomorrow. The new QE-pomo schedule for November is released at 3pm.
--

It would seem Google has launched a new offensive on the spam-bot URL referrers. So...all the daily web traffic numbers are at least 'moderately' lower for everyone out there! Its a good thing though, the bots do nothing but slow down page loading times.
--

Thursday is the end of the month, and indeed...for the old school chartists, it will be very important to see how the monthly cycles close for everything, especially for the equity indexes.

Without question, its been a very bullish month for both US and world equities. I see little reason to see why the current wave won't last for another 4-6 months. I should clarify that such a thought/outlook sure does sicken my stomach, but hell, at least I'm not going to waste my time, effort, and money trying to short it.

--
For the macro-economists out there...

--
Posted by Trading Sunset at 03:00:00
Email ThisBlogThis!Share to TwitterShare to FacebookShare to Pinterest

The main indexes closed moderately lower, with the sp -8pts @ 1763, having earlier peaked at 1775. The two leaders - Trans/R2K, closed lower by -0.6% and -1.5% respectively. Equity bears have a reasonable opportunity to knock the market a few percent lower in the coming days. 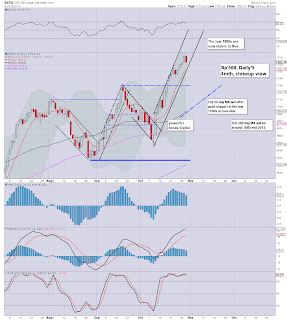 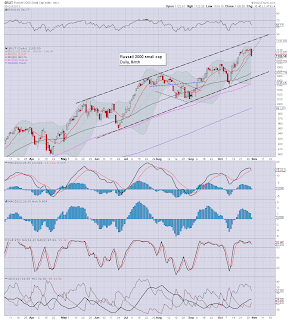 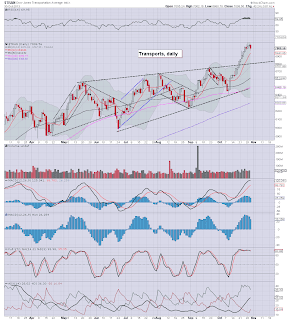 Another FOMC out of the way, and the indexes are looking like they are rolling over.

Indeed, the two leaders are leading the way, and further declines of 2-3% in the near term look viable.

However, with continuing QE, I just can't see a sustained multi-week down cycle, and I'd have to guess the sp'1730s - where there is an obvious gap to fill, will hold, before renewed upside across Nov/December.
-