With US indexes moderately lower, it was no surprise to see the VIX build gains across the day, settling higher by 5.5% @ 11.60. Near term outlook is for renewed upside in equities, with the VIX remaining in the 12/10 zone. The 9s remain viable.. if briefly. 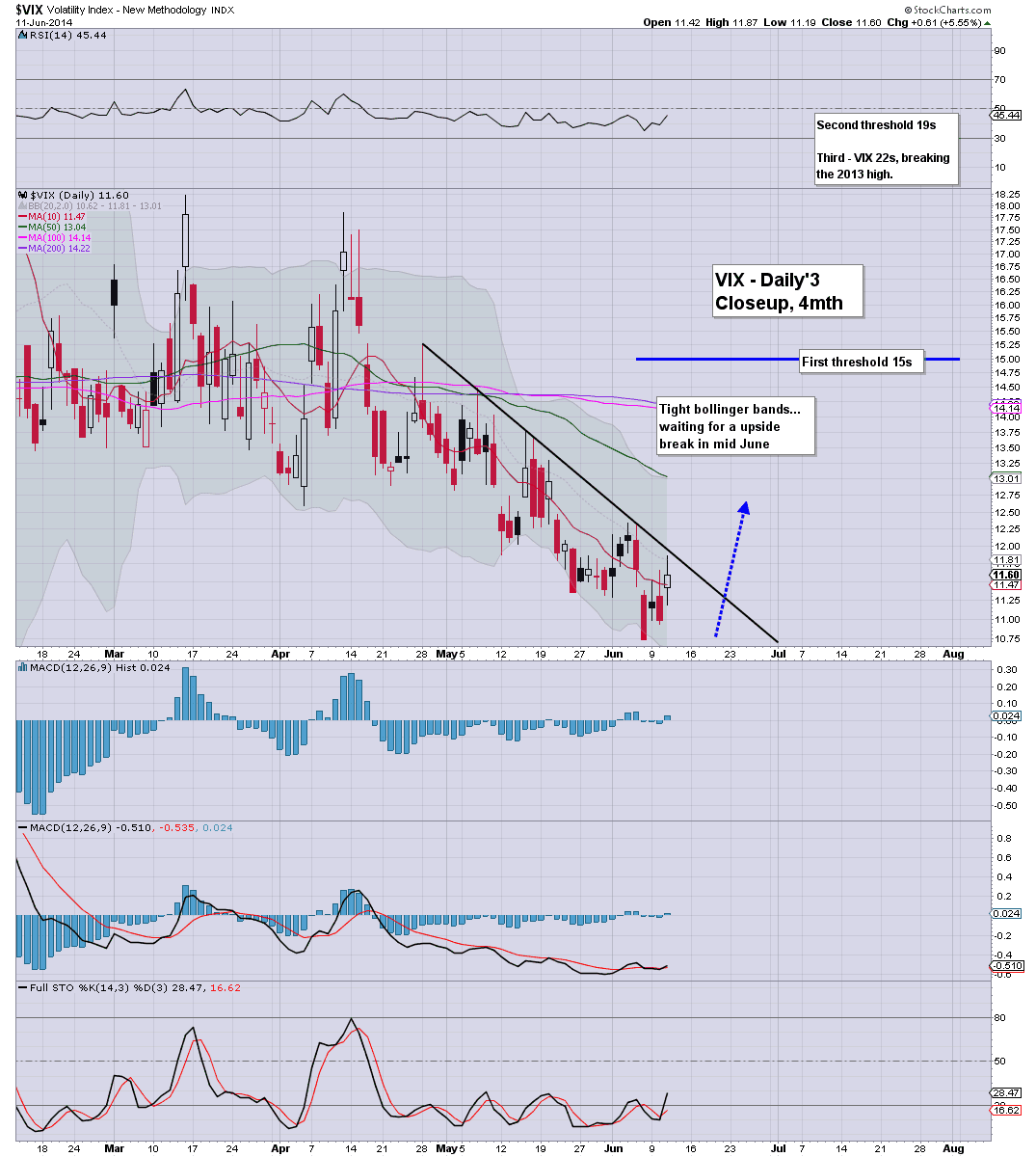 We're going to surely break out of the descending trend next week -at the FOMC.

From there, I'll be looking for another wave higher in equities, which should keep VIX pinned low into mid July.
-- 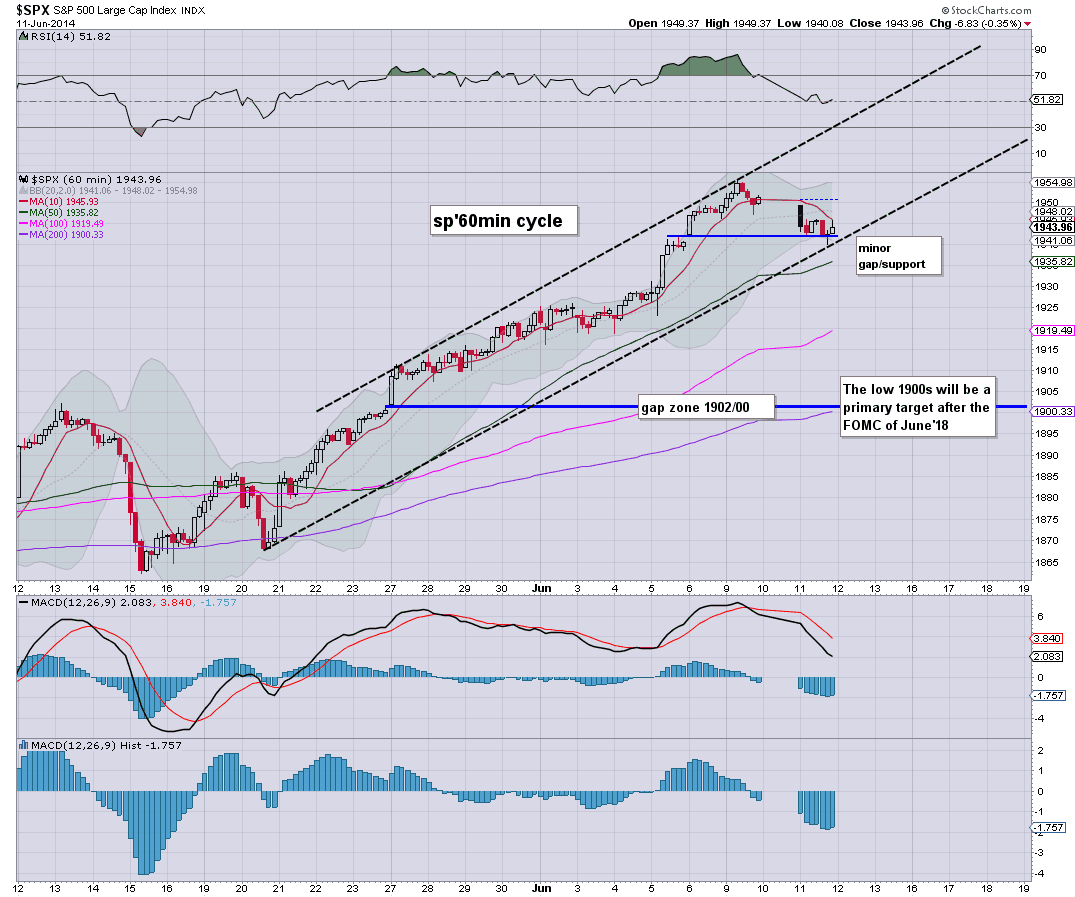 Today's minor declines, regardless of whether you want to call it a sub 4.. or D wave, I still expect further upside into early next week.
--

the usual updates across the evening.
-

US equities look set for minor churn - with underlying bias to the upside, into the close. Mr Market continues to display the same style of price action as it has for some weeks..arguably..months. 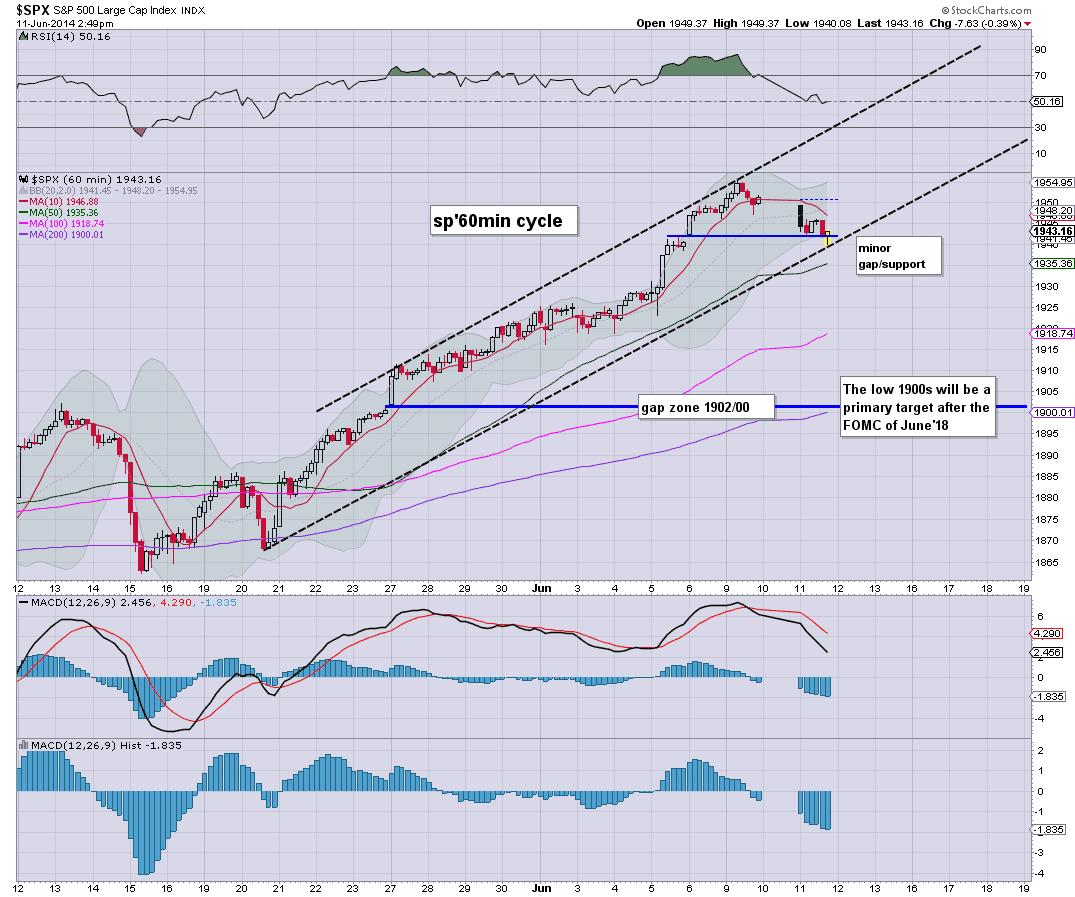 There is certainly some interesting action going on in individual stocks, but the broader market is basically just seeing some minor weakness, after what have been pretty significant gains from the sp'1864 low.
-

*I will hold moderately LONG overnight, via WFM - which has recovered well from earlier lows, and I remain seeking the $44s.

WFM has recovered very well, and might even close net positive, which is certainly pleasing..I could do with the 44s by late Friday, and then close out for the weekend.

A daily close in the $42s would be good...and keeps up 44s by Friday..although I realise that would require a sig' jump across the remainder of the week.

Main market...merely in standard recovery mode....1944....
Posted by Trading Sunset at 19:50:00
Email ThisBlogThis!Share to TwitterShare to FacebookShare to Pinterest

US equities are still moderately weak, with the Dow -115pts, but then.. that is only 0.7%. Metals are failing to show any strength, and have turned red, Gold -$1. 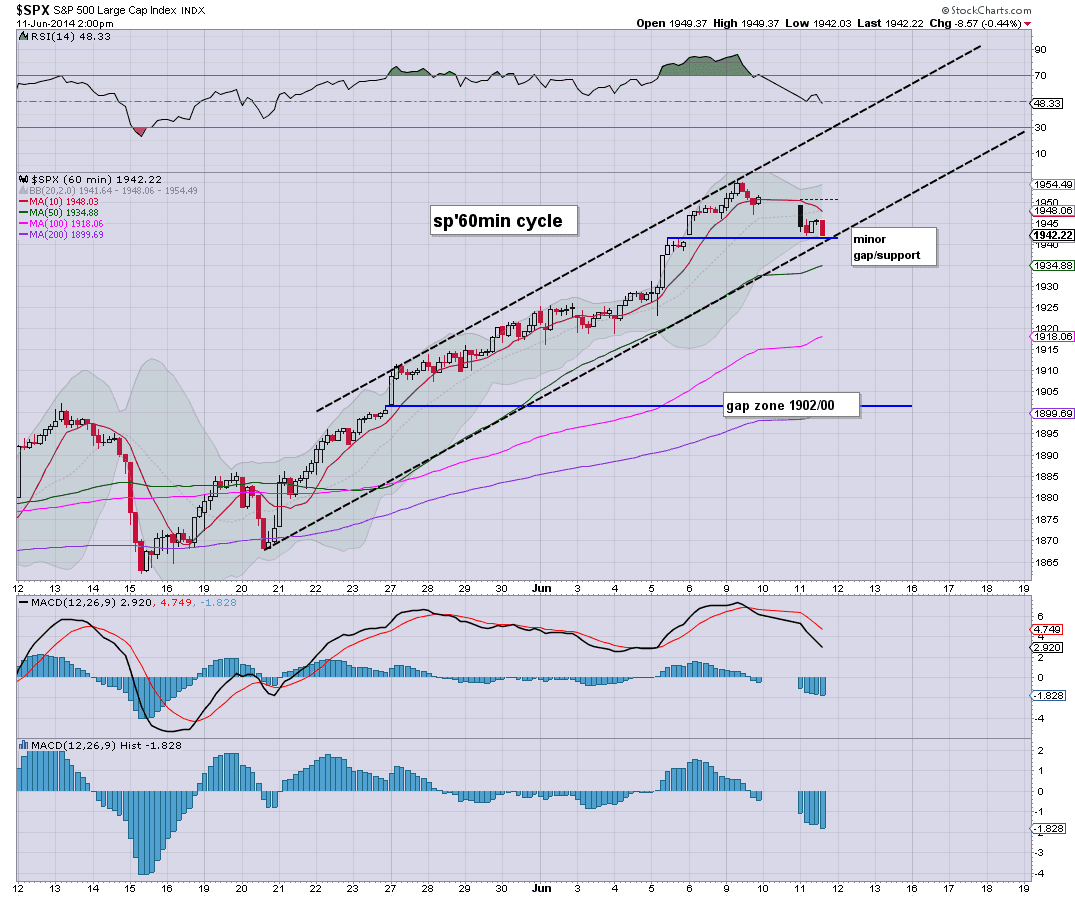 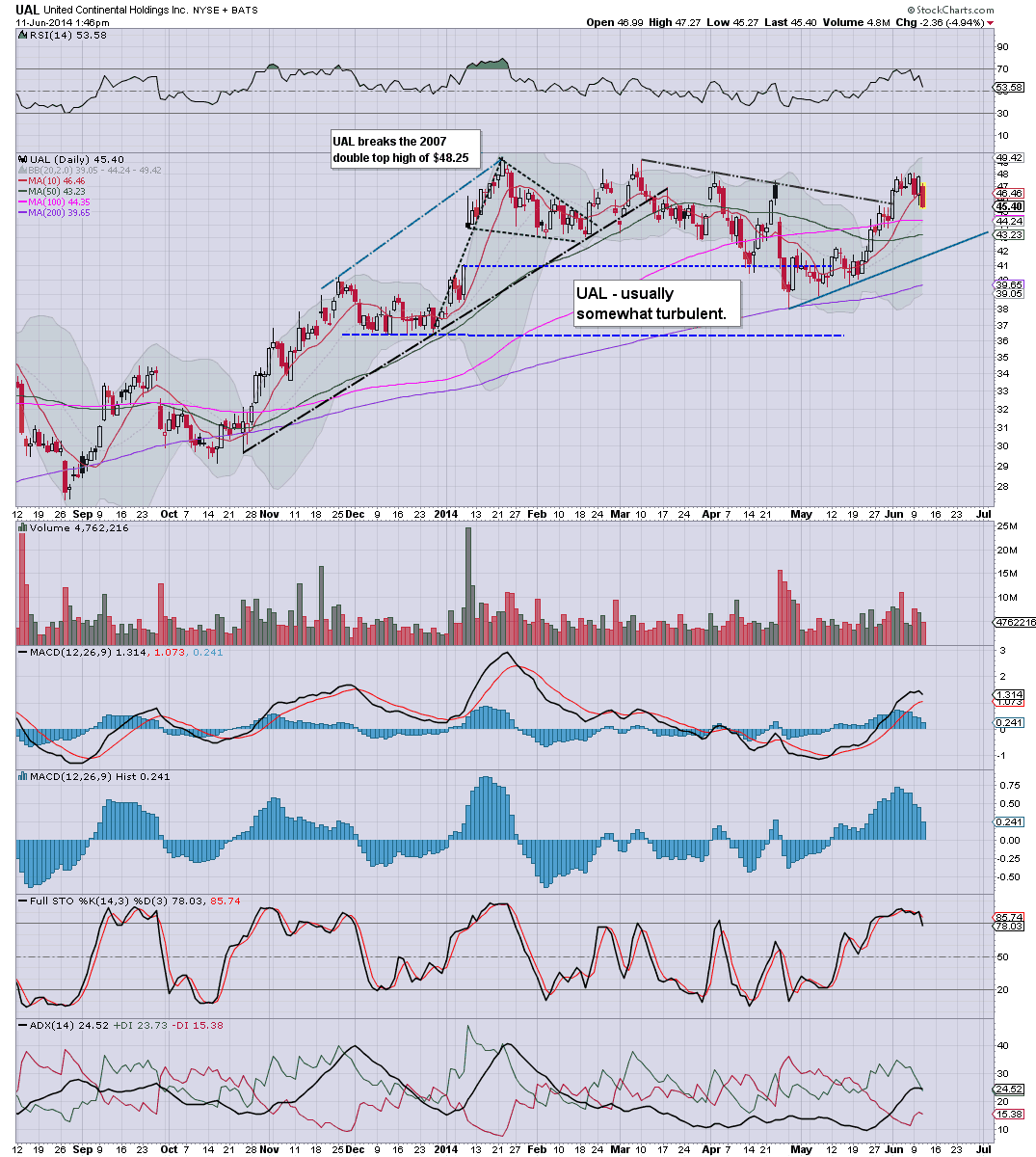 Equity bears getting a chance to exit at the low of day.

I am tempted to almost pick up an index-long here....but I'm really not in the mood.

90mins...time for an up wave.
Posted by Trading Sunset at 19:00:00
Email ThisBlogThis!Share to TwitterShare to FacebookShare to Pinterest

US equities remain moderately lower, but price action is no different than the previous few weeks. Sp'500 looks set to hold the 1940s, before resuming a slow push higher into next week. 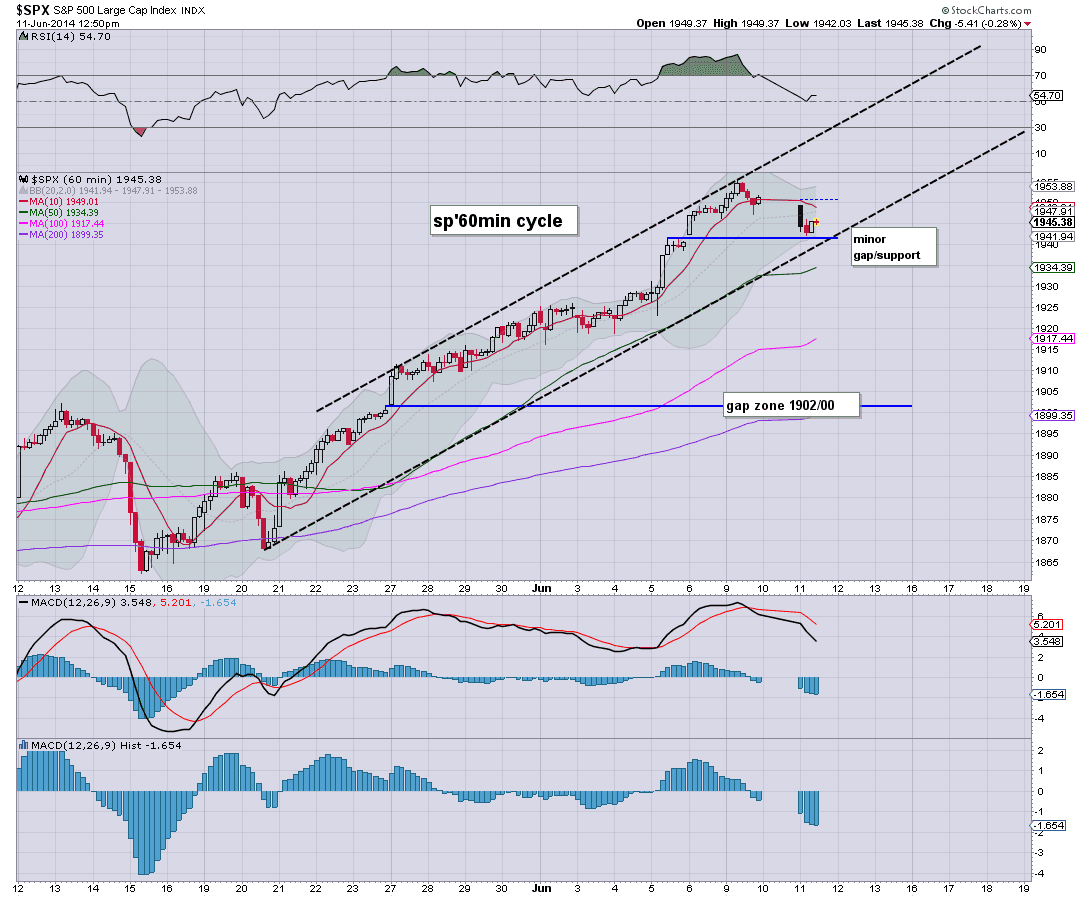 *I am reading a few top callers out there, I can understand why some are calling it, but I just don't see how the market is going to weaken for at least another month.

*WFM is annoying today, -1.4% in the mid $41s, I'm still seeking the 44s. Lately, I've next to zero patience. If I weren't posting, I'd turn off my screen and come back next week.
Posted by Trading Sunset at 17:51:00
Email ThisBlogThis!Share to TwitterShare to FacebookShare to Pinterest

Equity bulls are comfortably holding the first support zone of the low sp'1940s. A daily close in the 1950s remains very viable, not that it is necessary. Metals continue to see minor chop, Gold +$1 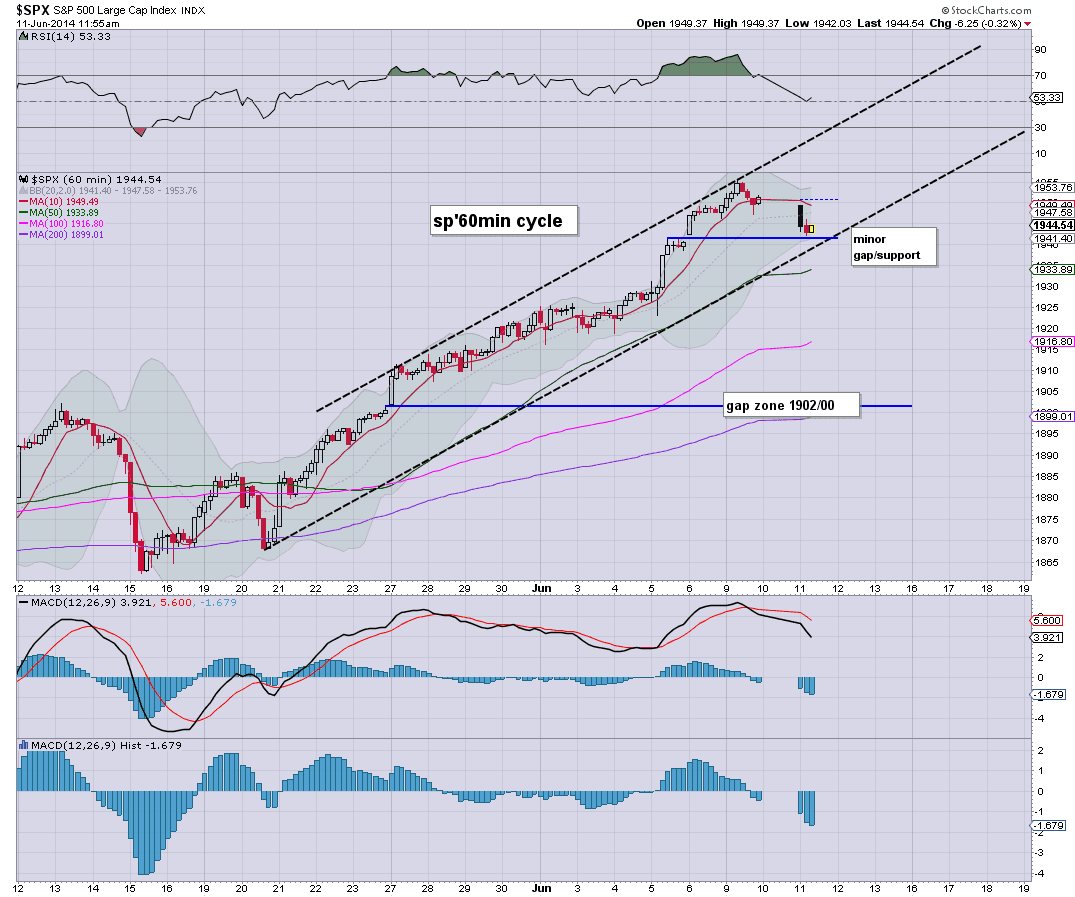 There isn't much to note.

Price action remains generally strong, and the 1960s still look likely before the next FOMC of next Wednesday.

--
time to cook
Posted by Trading Sunset at 16:58:00
Email ThisBlogThis!Share to TwitterShare to FacebookShare to Pinterest

US indexes remain moderately weak, but so far..the equity bulls are holding first zone of support in the low sp'1940s. A daily close in the 1930s still looks unlikely until after the next FOMC. VIX is clawing higher, +4%, but still in the lowly 11s. 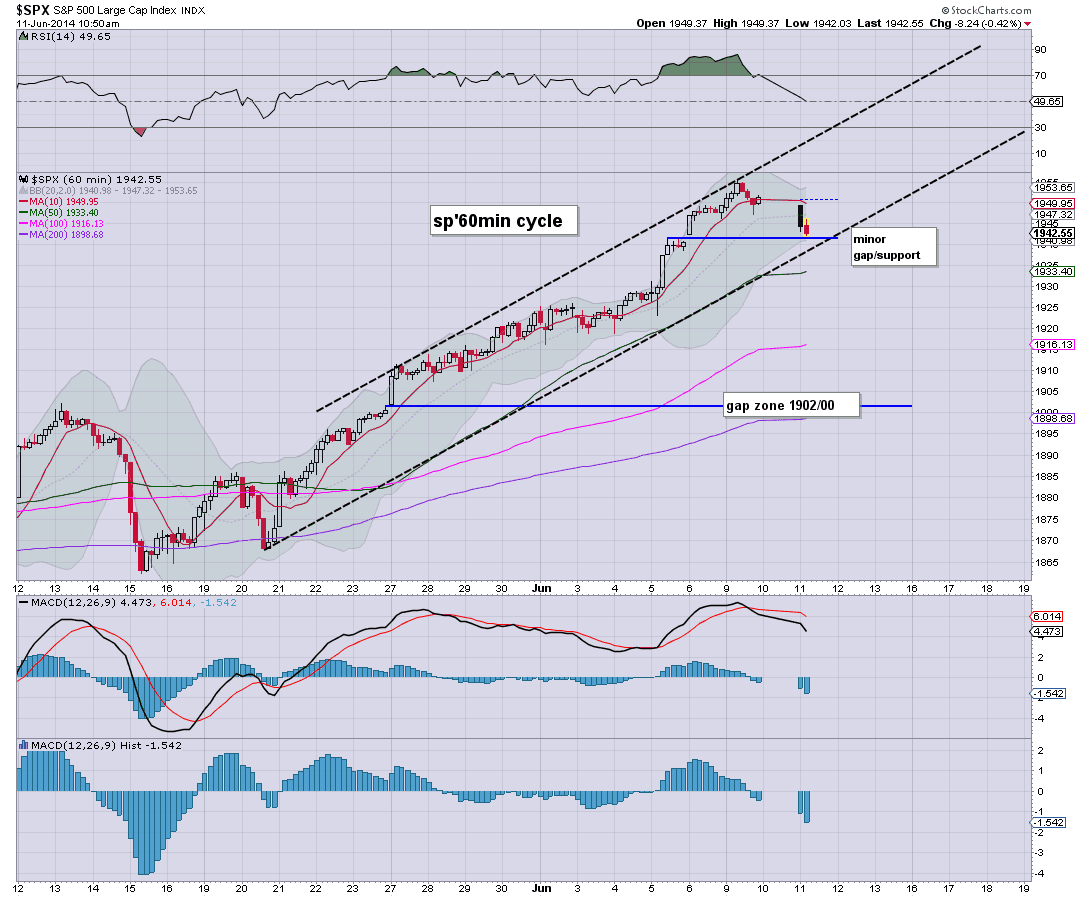 *yes..stockcharts has missing intraday data from yesterday. That has naturally skewed all the MAs, etc.
--

So...we're lower, but really, this is nothing. The only solace for the bears is that there isn't any sig' QE until next Monday.

Posted by Trading Sunset at 15:52:00
Email ThisBlogThis!Share to TwitterShare to FacebookShare to Pinterest

US indexes have slipped moderately lower, but the declines don't appear to have any real chance of building across the day. The primary trend remains to the upside, and will likely continue into the next FOMC. Metals are looking weak, Gold only +$1 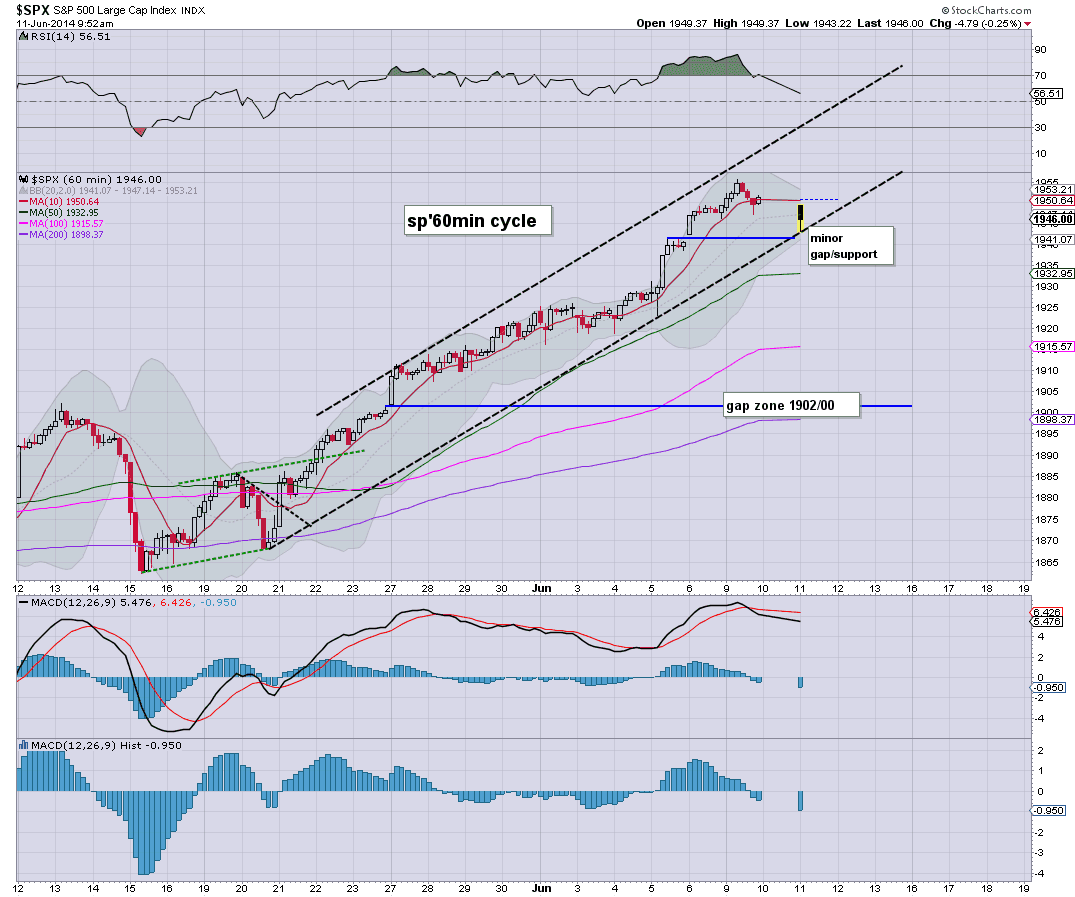 So..we're lower, but I just don't see any reason why we'll go much lower than 1940 today..or even for the rest of the week.

Yes, the daily MACD cycles are rolling over, but then..upside pressure is still very strong.
-

AMZN +2%
UAL -2%
-
Posted by Trading Sunset at 14:53:00
Email ThisBlogThis!Share to TwitterShare to FacebookShare to Pinterest

Good morning. Futures are moderately lower, sp -8pts, we're set to open at 1942. Equity bulls should be able to hold the line around 1940. Metals are a little higher, Gold +$3. 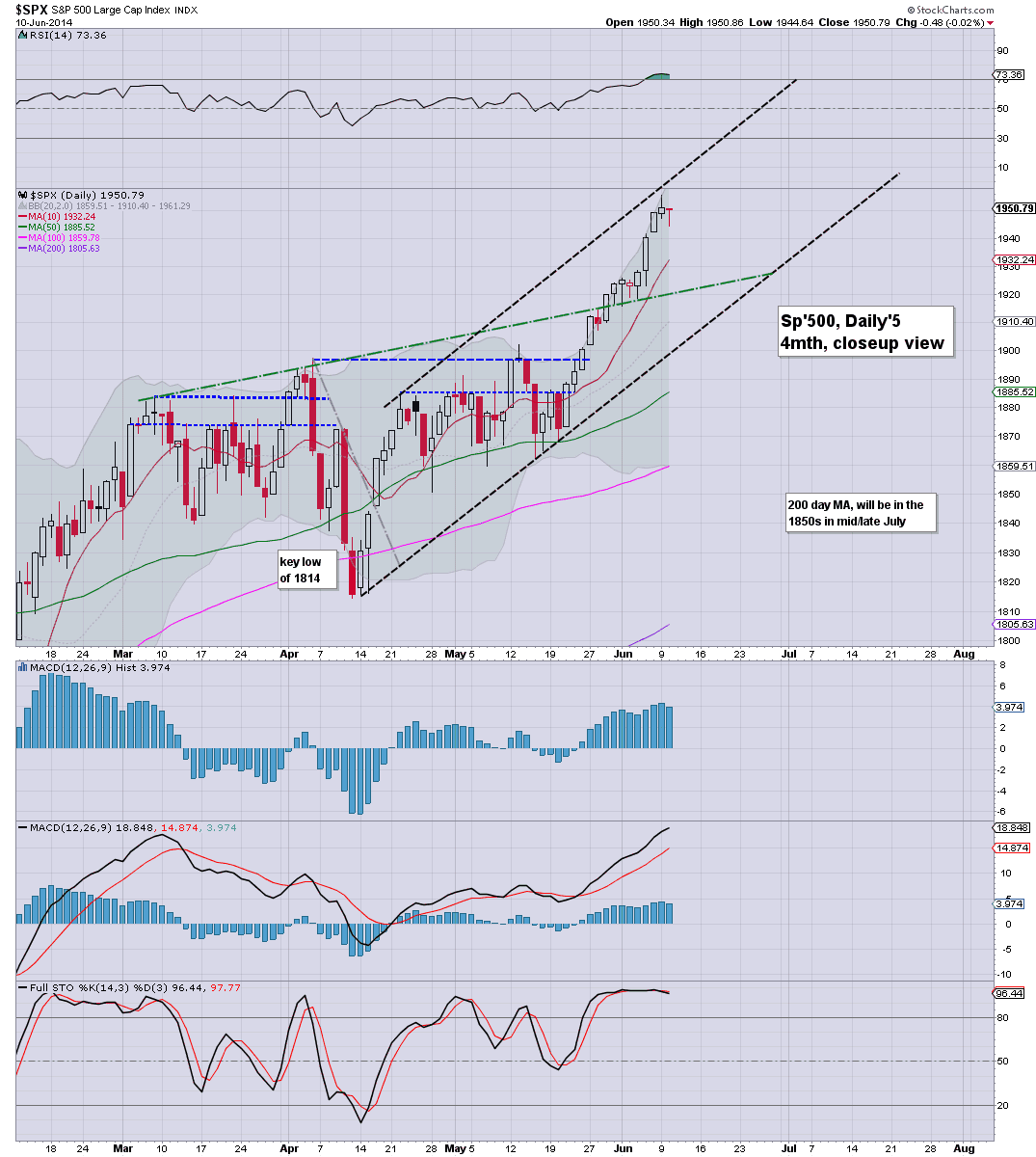 So..we're set to open somewhat lower, but the bulls can easily sustain 1940.

Again, it will be interesting to see what sort of buying interest we get on this latest minor decline.
-

*stockcharts should be fully working this morning, although I think some of yesterdays intra-day data will be missing.
-


-
Posted by Trading Sunset at 13:30:00
Email ThisBlogThis!Share to TwitterShare to FacebookShare to Pinterest


*with stockcharts back (sorta), here are a few of the main indexes 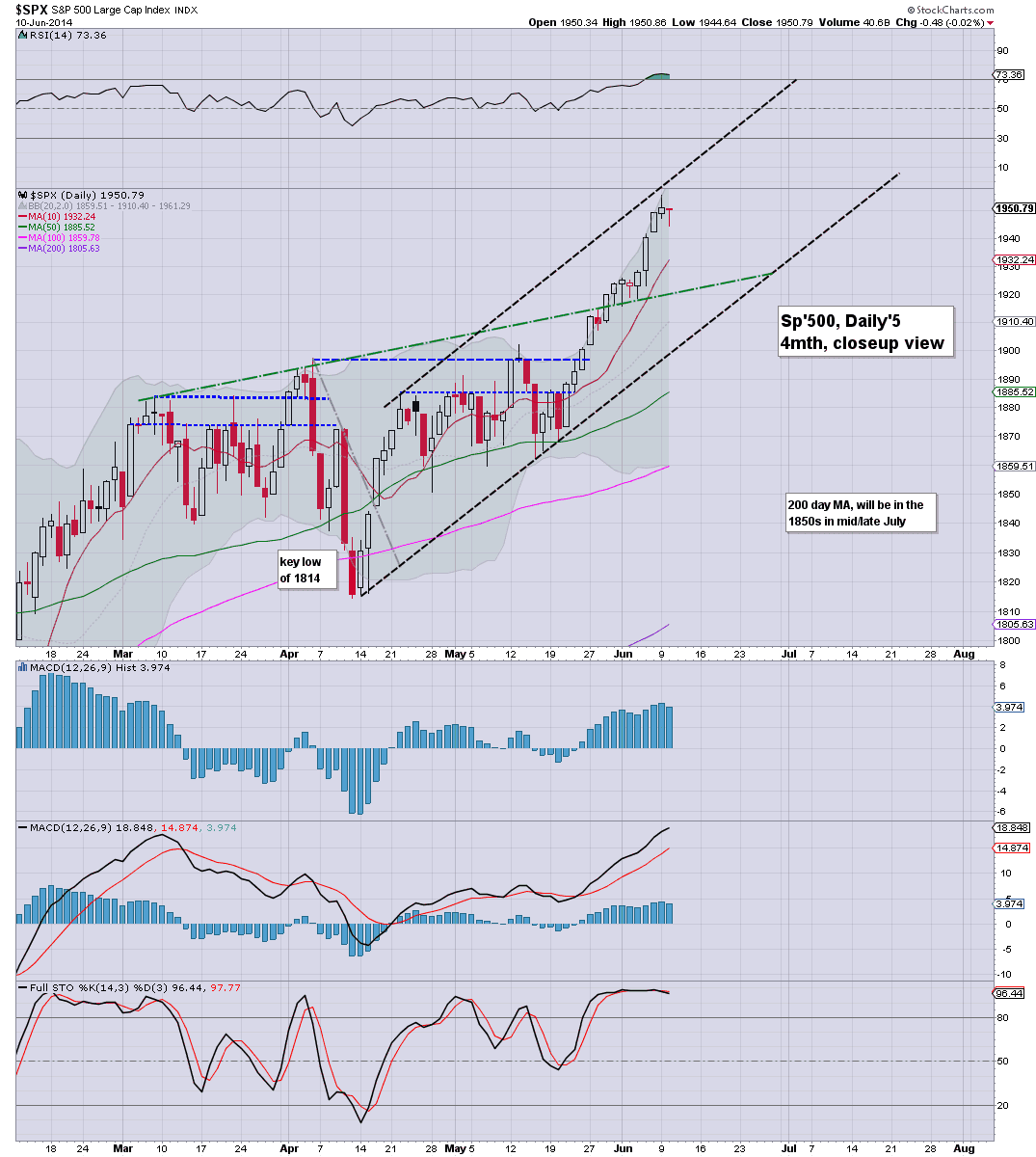 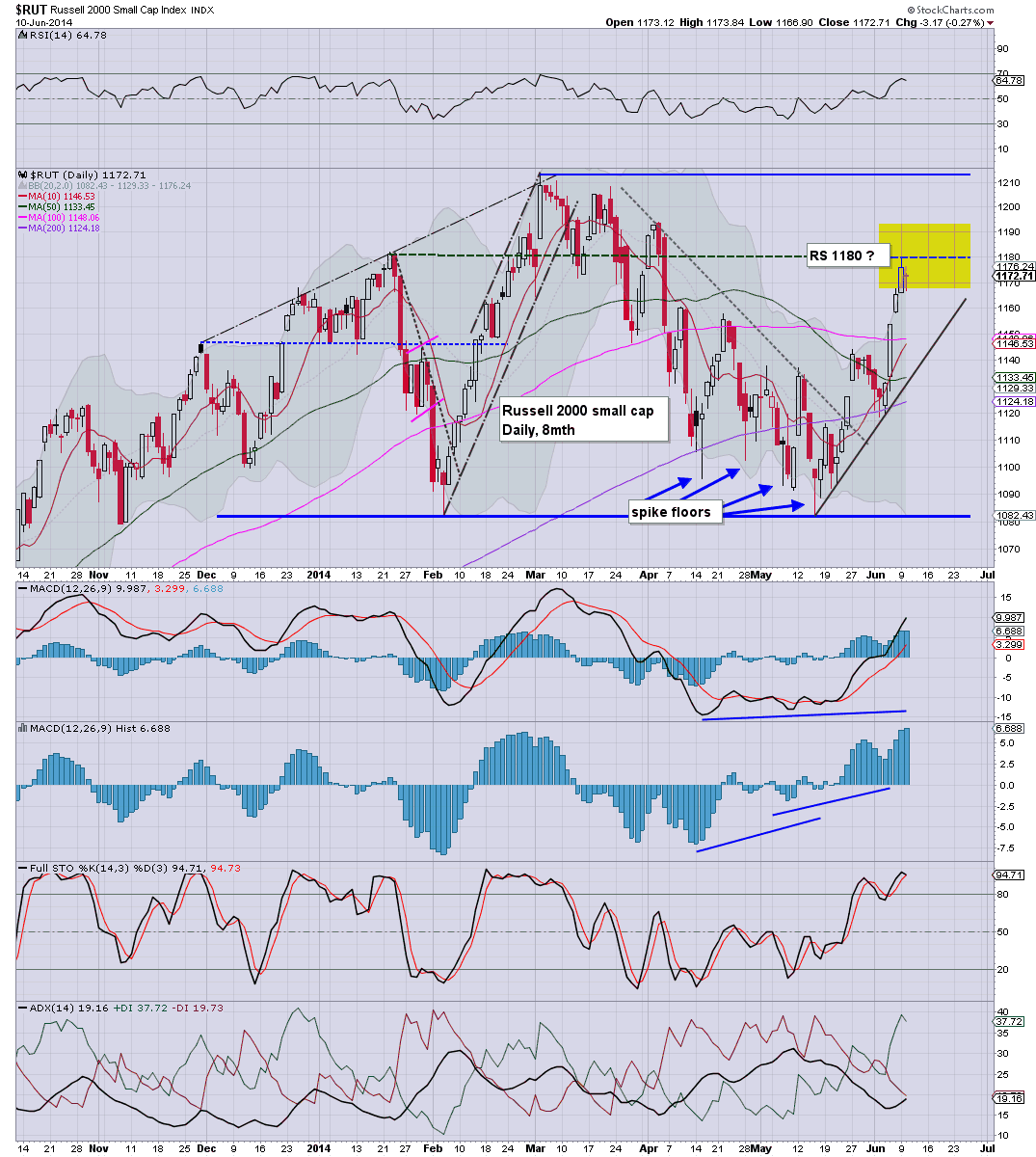 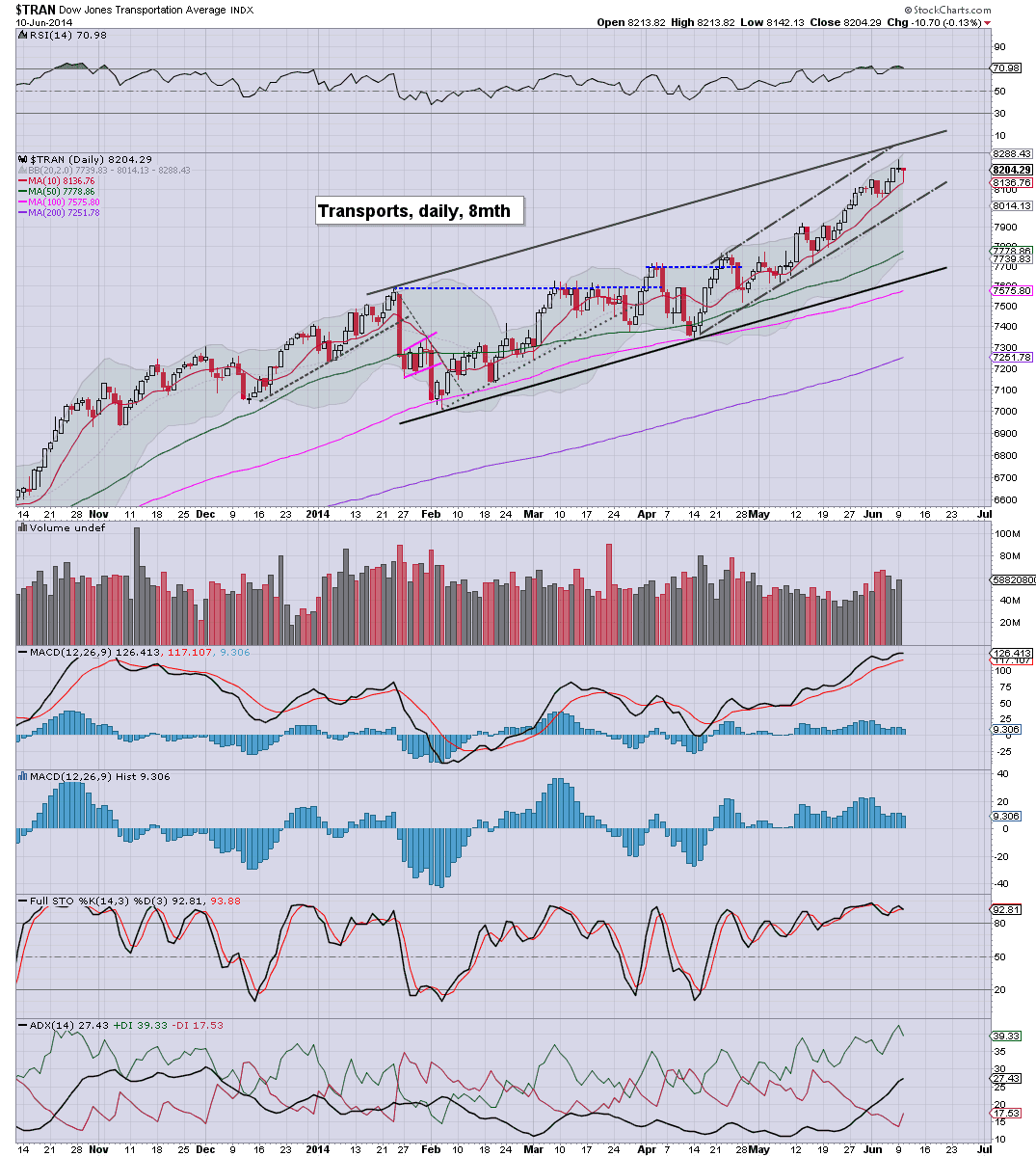 *first to be clear...I do NOT expect the R2K to remain stuck at the current level, I do expect the 1200s within the next week or two, and new highs in July - along with all other indexes.
--

So, a relatively quiet day in market land, and it is notable that the sp' managed a second consecutive close in the 1950s - a level many thought not possible until year end.

There isn't much tomorrow. The only notable things are the EIA oil report, and the US Treasury budget.

*next sig' Qe-pomo is not until next Monday.
--

With stockcharts being offline, it was not the easiest of days. I do have access to my own broker chart software of course, but none of that is annotated, and its just not as good.

I don't expect much from the broader market tomorrow, other than relatively quiet conditions, with the underlying upside. Daily cycles are offering the sp'1960s this week, and I do believe we'll see that.
--

*this morning I picked up WFM from the $41.60s, well above my target entry, but with viable upside to at least the 44s, I decided to chase it higher. I'll probably hold until Thursday/Friday.