Its that time of the month, lets take a grand overview of ten of the worlds leading stock indexes. 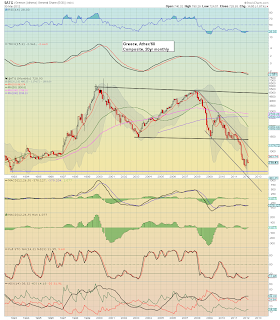 After a strong opening to the year - with February showing some brief follow through, Greece ended March slightly weaker, the much bigger down trend remains entirely intact. Even a move to the 10MA - or even a touch above, by early summer is almost certain to fail. This market is already past the 'Armageddon' phase, there is only 15% or so left. In the scheme of things, the Greek market is already over. 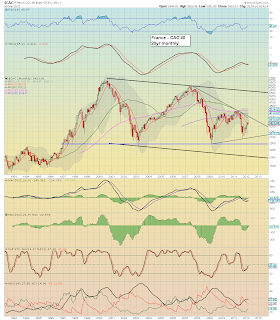 France is a key market to watch, and I believe its going to be vital to closely monitor across the next 3  months. It should give USA traders a warning as to if this post-October rally will keep on going...or rollover.

The CAC'40 at 3423 presently, will face SEVERE resistance around 3700 by late June/July. This of course is the time I expect the US markets to be peaking around 1550. Also, a move of 10% in the CAC, would match up perfectly with a further 8-10% in the SP' index. Things are really looking in sync' across a number of world indexes.

Of special note, the MACD (green bar histogram), will be very close to going positive cycle by mid April, and there should be a bullish cross of the MACD red/black lines. So, everything is set up for one final burst upward. One final thing that you can see in terms of the MACD, we've have two broad up cycles since the 2009 low. The coming third tower/+ cycle will be much smaller, and we should see a confirmed rollover by August/September. That would bode very well for at least a 3-6 month down cycle in the main indexes. 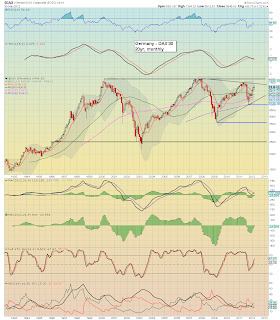 Germany has had a great first quarter - even though it was a difficult March for the EU, and ended positive. If there is one index in Europe that can break out to much higher levels, it is Germany. The MACD cycle will almost certainly go positive cycle at the beginning of next week - providing a pretty huge buy signal for the algo-bots for April and into early summer.

There will be strong double-top resistance around the 7600 level in the next few months. I'd guess we will fail there, and even the strongest EU nation/market will rollover in the latter part of the year. 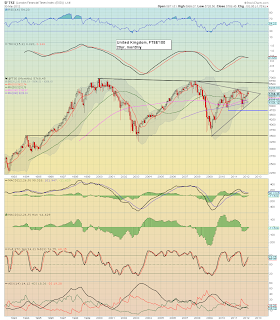 The FTSE index had a moderately weak March, but the underlying trend is still positive, and just like Germany, looks set to go positive cycle in early April. I'd guess the FTSE is likely to go above the May'2011 highs, with a target around 6200/6400. That would again match up with the overall SP'1550 target, no later than July. 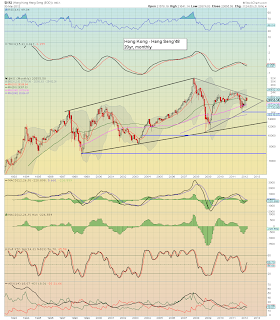 A weak month for Hong Kong, losing 5%, but underlying trend still looks upward (although weakening). A target of around 22/23k would seem the very best that the bulls can aim for. 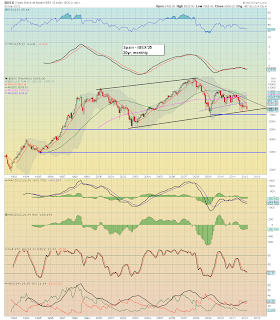 Spain is one of the weakest EU markets, a real economic basket case. With 50% youth unemployment, we have seen just this past week increasing social unrest. The Spanish people are getting moody, and with summer coming, it will only get much more 'dynamic' there. Bullish fire extinguishers, glazing companies, and rock miners? 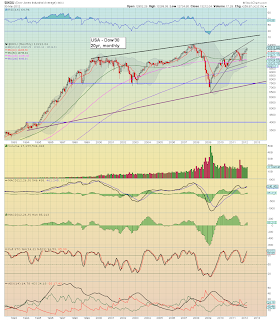 Six straight months up for the Dow, and it remains arguably the worlds strongest index. The MACD cycle has been positive for the past 3 months, and a few more positive months seem highly probable. In terms of price action, next target is upper bol' 13500, then a test of the 2007 bubble high of 14198. It is entirely possible that the dow will make a new high..briefly..as high as 14500/700 by July. A new dow high, to coincide with a facebook IPO? That would make for a near perfect marker point for a top. 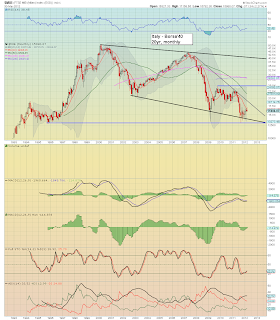 Italy is weak, but a test of the declining channel line around 17500 seems probable. The underlying MACD cycle looks set to go + cycle in April.

From a bigger perspective, you can see that Italy is still some 65% lower than the 2007 bubble era. A truly epic 'waste of time' for the buy & hold Italian investor. The Italian market is broken, and what will be very curious to watch is what happens if we break below the 13k level. 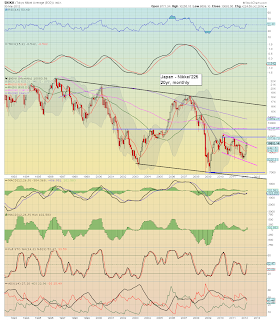 The bull flag that I mentioned in the first world-index report has been marginally broken above. First target remains 11k, and -assuming the bigger bearish outlook is correct, the 11k resistance will hold, with a move to the lower channel line of around 6k sometime in 2013. 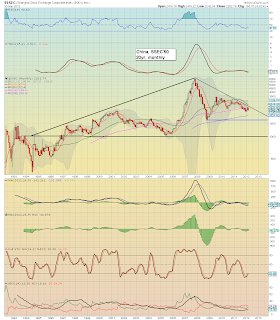 There is an incessant amount of China doom talk out there. Even a Zerohedge posting on Friday was suggesting a China market crash is viable. Indeed it is, but - considering the near term outlook for the other world indexes, I believe it won't happen until at least Q3, or more likely Q4.

A move as high as 2600 seems viable in the coming few months, but it looks highly improbable that it can break and hold over the next huge psy' level of 3000. Just like in Italy, the really curious aspect is what happens if we break below 1700 - it would open the door to a further 45% fall to 1000. That will not please the amateur Chinese trader..they've had a rough 5 years already (down around 60%)..a move to 1000 would be a fall of 85% from the bubble peak. China social uprising in 2013?


In Closing
Despite the huge concern, the Greek 'Can' was successfully kicked ahead a few more months. Of course, attention is now shifting to the bigger PIIGS of Italy..and Spain. Spain will be the one to watch for all of 2012, will the government ignore the will of the people? Fridays announcement of huge public sector cuts sure is not going to help the social mood. Expect 'trouble' ahead in the sun baked streets of Spain.
With underlying momentum on most of the world indexes still crawling upward, we should expect April...and into the May-July period to show some broad gains..roughly between 7-10%. A few indexes will doubtless fall short or exceed this range.
Looking ahead, we will probably see more 'Green Shoots' talk in April. Earnings season will probably come in 'okay'. The maniacs on the various clown channels still have the biggest IPO to look forward to - the Facebook. A market peak around such a debut would make sense, and then...the next broad down cycle can begin.
I hope this overview was useful, as they say in the mainstream..'stay tuned'..more coming this weekend!
Good wishes
Posted by Trading Sunset at 15:00:00
Email ThisBlogThis!Share to TwitterShare to FacebookShare to Pinterest

Welcome to the Weekend :)

Today was certainly not a bear massacre, however, neither were the bulls damaged. Considering it was end quarter, things seemed kinda quiet. 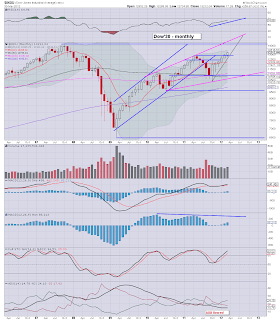 The Dow had another good month, not too much..not too little. The pace of uptrend is VERY consistent, and that's why I remain bullish. We pulled back during the month, but still closed higher, and that's a good sign for April.

Will April be rife with Green shoots? We have earnings season real soon, and that could be the catalyst to whack this market another 3-4% higher, enough to open the door to the target sp'1550 by late June/July.

Much more over the weekend. Good wishes
Posted by Trading Sunset at 00:09:00
Email ThisBlogThis!Share to TwitterShare to FacebookShare to Pinterest
Newer Posts Older Posts Home
Subscribe to: Posts (Atom)