After a somewhat choppy short three day week in the US markets, thoughts again turn to where we are headed into years end. With the EU states all failing to address the lack of job creation, and the US government facing the infamous fiscal cliff, the closing two months of year are surely going to be quite interesting. 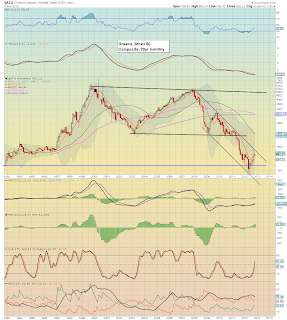 After a major summer ramp, the Greek index got stuck at the descending upper channel line. From a chart perspective, it doesn't get any cleaner. With some political turmoil this past week, the Greek market is already slipping lower  I suppose the recent rally could be counted as a wave'4 since the 2007 peak, but regardless, I still think this index is headed <100, not least when the Greeks exit the Euro. 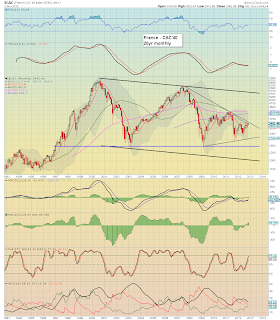 The CAC is at an important junction. A monthly close >3700 or so would be pretty decisive. Underlying momentum is upward, but the market is still far below the summer 2011 highs of 4250.

The CAC will be a key index to follow if the euro-markets start to get rattled into year end. Any monthly close <3000 should open up the big 2000, a level not seen since 1996. 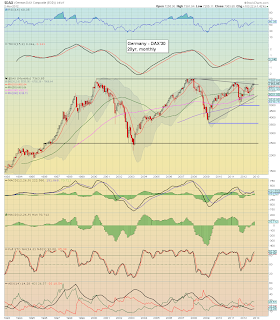 The mighty German DAX is stuck. A failure to hold over the 10MA @ 6882 would be a real warning of trouble. Germany remains the foundation stone of the European economy, it unquestionably has a good long term outlook. On a 1-3 year outlook though, it will very likely be dragged lower by the poorer EU states.

A break below 6k would be very problematic, and re-open up 5k. 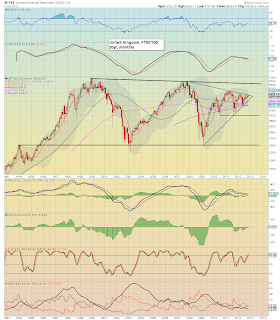 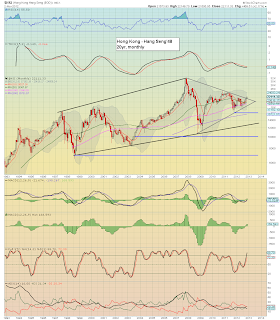 Hong Kong is one of the few indexes with a very clear breakout. As ever, what will matter will be how we close the month, and indeed the next few months. So long as the Hang Seng can hold over 22k, the outlook looks outright bullish. Next target would be the 2011 highs @ 24k 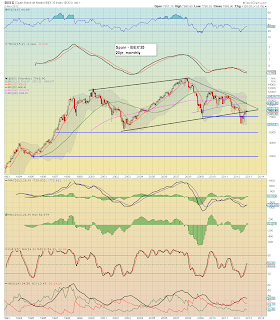 One of the two big ugly PIIGS, Spain remains a basket-case, and it looks inevitable that the IBEX will decline just as the Greek index has (90%..and counting).

The Spanish government is corrupt (perhaps almost as much as the Italians), incompetent, and lacks any vision as to how to foster genuine economic growth. Arguably, the summer ramp will all be taken back within the next 3-6 months. Primary downside target for 2013 is 5000, and then 3000. 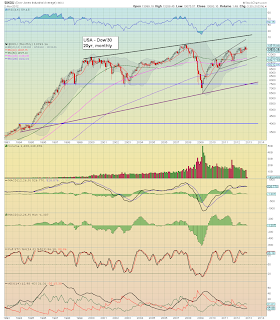 With the help of the Fed, the cheer leading maniacs on clown finance TV, and a government that continues to overspend by 50%, the US markets are a mere 4% from the QE3 announcement high.

There is no question that the Fed will continue QE, and will very likely increase monthly purchase amounts from the Jan'2013 level of $85bn to around 125/150bn by late Spring - as the mainstream recognise that the US economy is close, if not in an actual recession.

First downside would be the June low of 12k, and then the 11300/11000 zone. It seems impossible to conceive that we'll be <11k before the second half of 2013 - and that's still assuming Mr Deflation will be lurking. 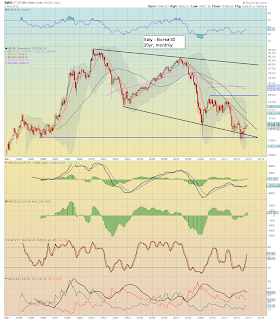 The second of the most ugly PIIGS, the Italian market has seen a pretty weak summer rally, and is still under descending resistance.Only with a break >17500, could I get bullish, and considering the Italian economy, that seems highly improbable. 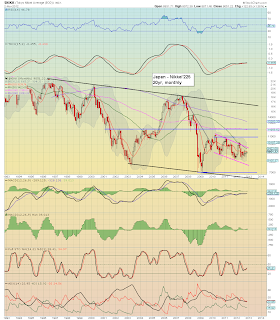 The demographic basket case that is Japan continues to be the ultimate example of an economy that is unable to break the deflationary monster. Only with a break >11k would I consider a possible trend change, and that seems unlikely in the near term. 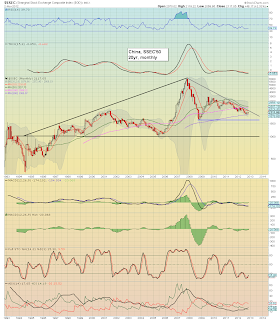 China remains perhaps the most elusive of the world economies. Just how much of the econ-data is even remotely correct? The stock market is still down around two thirds from the highs, and it was only recently that the big psychological 2k level was pierced...if briefly.

Only with a break above 2500, would it be clear that the current five year down trend is over.

Many of the indexes are starting to get stuck, after their somewhat surprisingly strong summer rallies. Germany remains the one bright spot in Europe, whilst the PIIGS continue with their wilful denial of the reality, and are still overspending. The US markets remain hugely propped up via the actions of the Bernanke - who is set to stay until his term expires in early 2014.

The actual key levels are pretty clear on the indexes, not least for the Dow'30. A few daily closes <13k, and that will open up 12k, possibly even the somewhat 'doomer' level of 11k, before year end. The latter seems generally unlikely, but we do still have that looming fiscal cliff that might cause some market upset.


Looking ahead into next week

With the fifth fail to hold opening gains in six days, the US market put in what is a pretty significant reversal on Friday. A major gap lower in the Sunday night futures of sp' 20pts sure would make things a lot simpler for the bears, and would open up the low 1300s within the very near term.

--
*ohh, and for the record, I'm guessing Obama wins a second term this Tuesday. From an 'entertainment' point of view, it would be much more interesting to see a new president, but still, my best guess...Obama wins..somewhat narrowly.

Back on Monday
Posted by Trading Sunset at 23:53:00
Email ThisBlogThis!Share to TwitterShare to FacebookShare to Pinterest

The US dollar has seen a moderate three month decline from July to September, but is starting to show some strength again. If the USD can rally into year end, it bodes very badly for equities, but especially for the commodity markets. 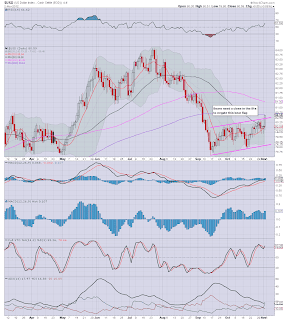 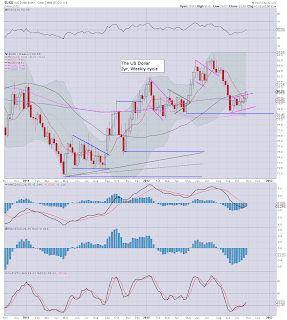 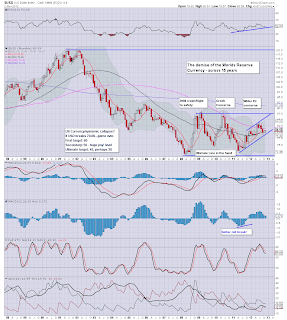 Today's USD gain of around 0.8% was certainly nothing too significant, but it has helped to solidify what is possibly a multi-month floor in the 79/80 zone.

First upside target is 81, which would be important, since it would negate what is a very clear six week bear flag.

It is usually the case that if the $ is higher..everything priced in $ terms..falls. Certainly, this is not always the case, but generally speaking, it absolutely is!

If we have indeed seen the low in the weekly cycle, then a move to test 81 and then 84 seems very likely. It would highly infer that the doomer targets - as suggested by the monthly index charts, of sp'1200, is still a valid possibility.

*Due late Saturday, an update on those important monthly index cycles.

Have a restful weekend, and goodnight from London
Posted by Trading Sunset at 04:00:00
Email ThisBlogThis!Share to TwitterShare to FacebookShare to Pinterest

For the fifth time in six days the opening gains failed to hold, and the market saw a fairly significant reversal. The main indexes closed lower by around 1%, with the VIX confirming the declines. 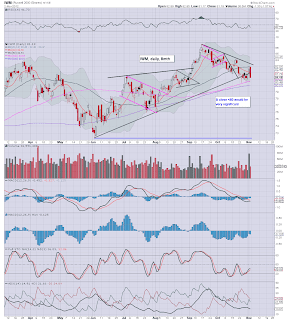 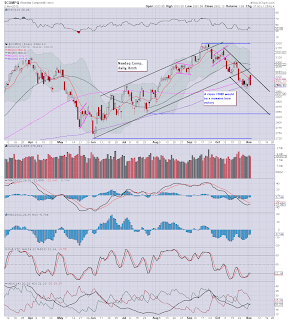 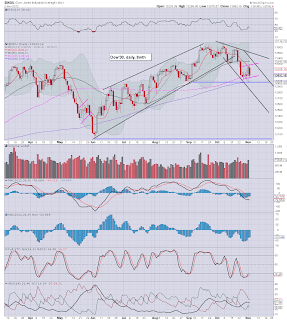 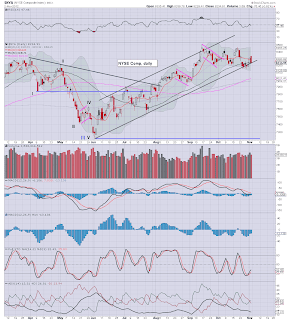 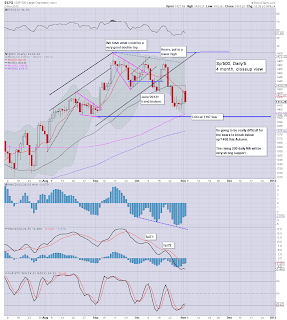 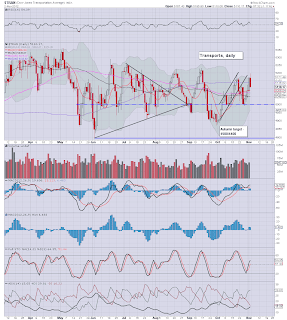 Hmm...a pretty interesting day huh? Those opening gains sure did spook many bears..not least myself, even though I had been anticipating further gains - the hourly chart from last evening had a very clear baby bull flag. The little flag was confirmed with the break over sp'1430..but the gains could not hold long, and we saw a very clear spike/fail.

We have bearish engulfing candles for IWM (rus'2000 small cap), Nasdaq Comp, and the Dow'30. Even though the other 3 indexes that I regularly highlight did not get such hyper-bearish candles, they all still put in significant reversals today.

So, it was a bearish way to end the week, and it would be somewhat surprising if we don't see significant follow through on Monday.


Dream scenario for the bears...

An overnight gap lower..right through the key cycle low of sp'1397. That requires an overnight drop of 18pts, which is asking a lot, but its viable. If Sunday night futures can break under ES 1390, we should see a major snap lower at the Monday open.