A huge week for the VIX 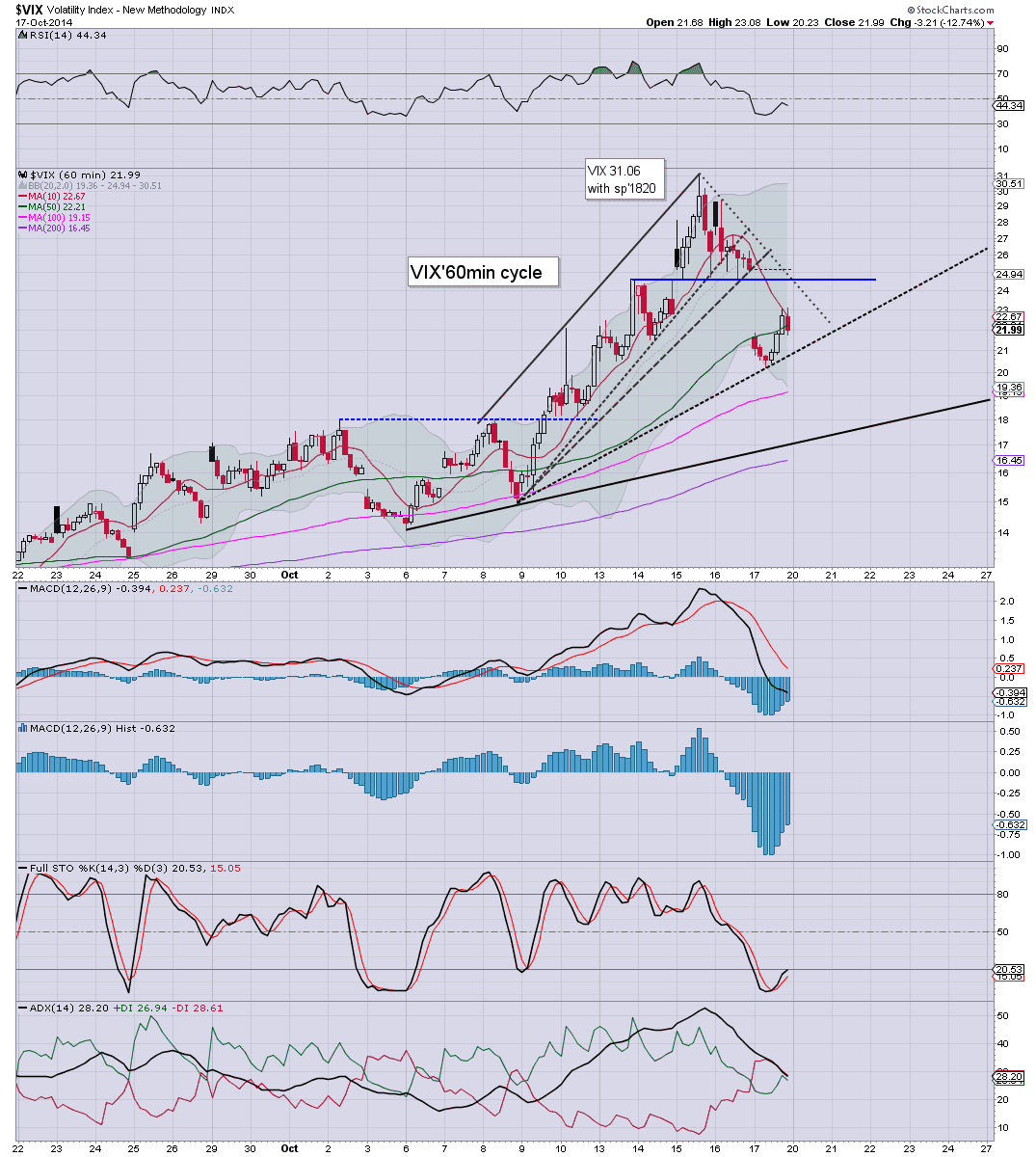 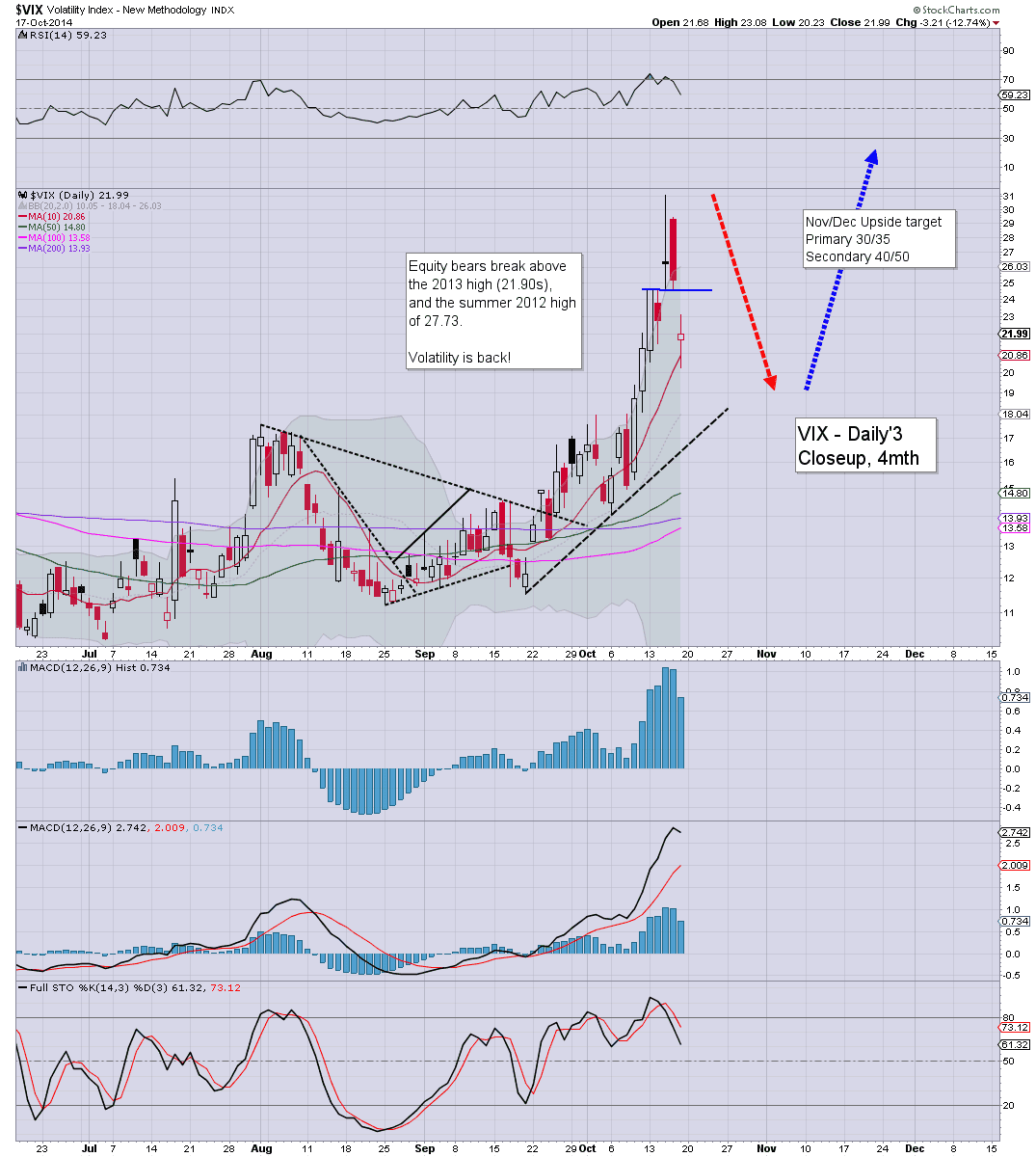 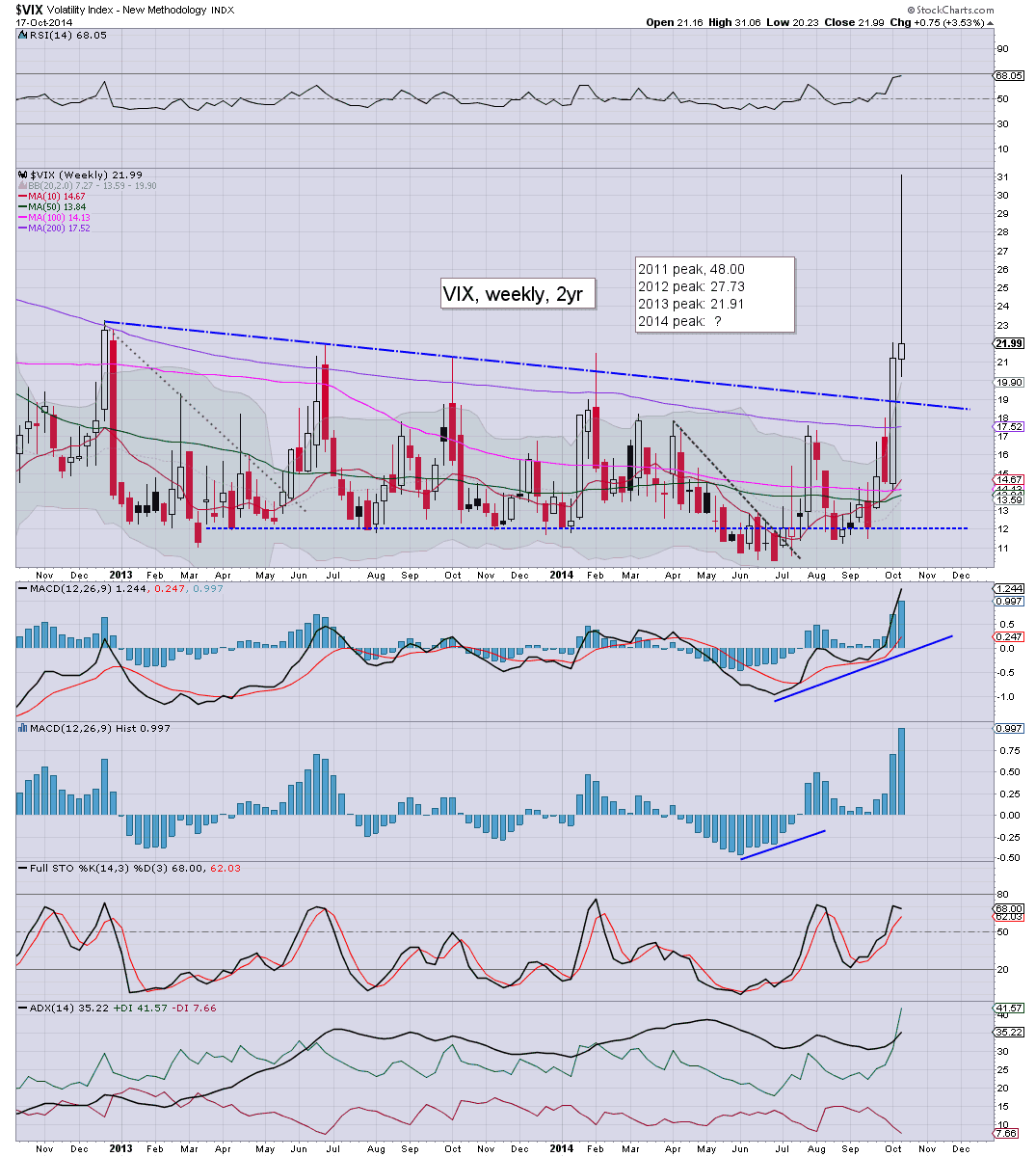 So, the week concluded strongly in favour of the equity bulls, as reflected in a VIX that has been whacked lower from the 31s to 21s across just 3 trading days.

Despite the VIX pull back though, last weeks close above the weekly 200MA was decisive, and with the new highs this week, traders should remain focused on the bigger picture, which has now shifted in favour of much lower equity levels.

It would seem that VIX 40s are due in the next multi-week down cycle, which would likely begin somewhere in the sp'1920/50 zone in November. 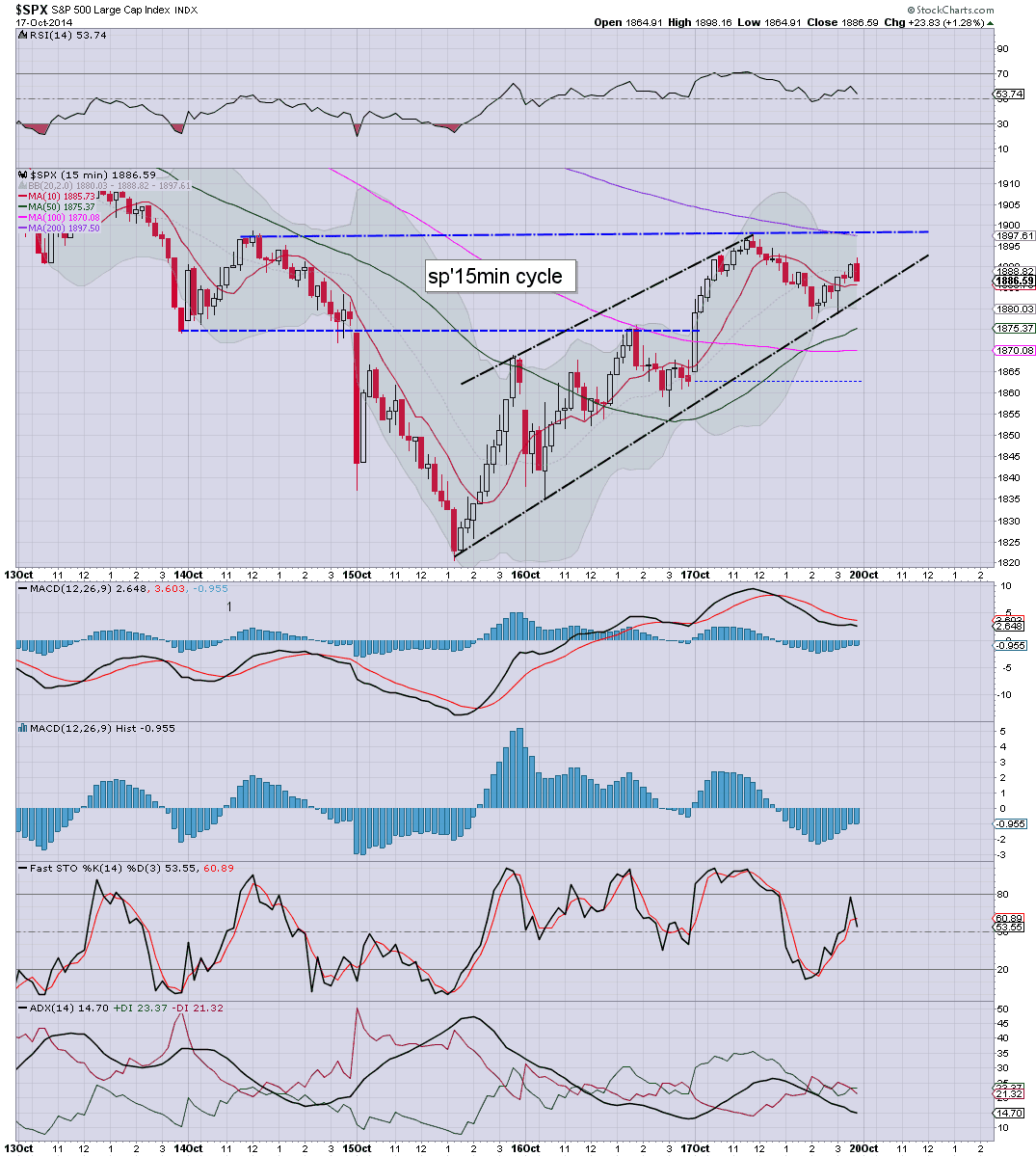 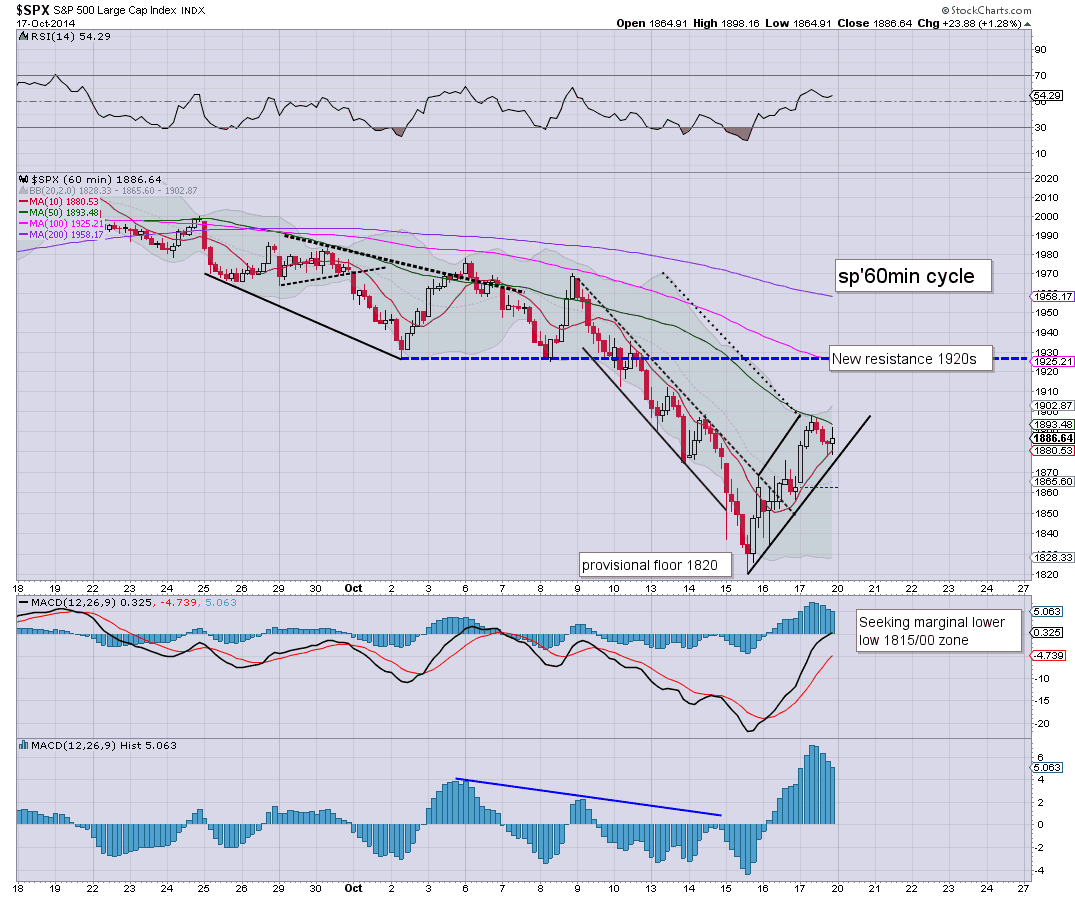 ...and another week in crazy market land comes to a close.

The closing level should be seen as a real disappointment to the bears, not least in the two leaders, both of which saw very significant net weekly gains of around 3%.


Where do we go from here?

So, this week we saw the low 1800s, along with VIX in the 31s, something that very few had expected as recently as last week.. but what now?

To me, the notion of new historic highs this side of spring 2015 seems nothing less than crazy talk. The monthly charts ARE broken. The damage has been done... and it is not going to be reversed, even with a move to the mid 1900s by early November.

*I hold a minor short-index block across the weekend, but it ain't looking good, with the real threat of a straight run to the 1920/50 zone.. before next wave.

--
the usual bits and pieces to wrap up the week... across the evening.
Posted by Trading Sunset at 21:01:00
Email ThisBlogThis!Share to TwitterShare to FacebookShare to Pinterest

3pm update - cooling into the weekend 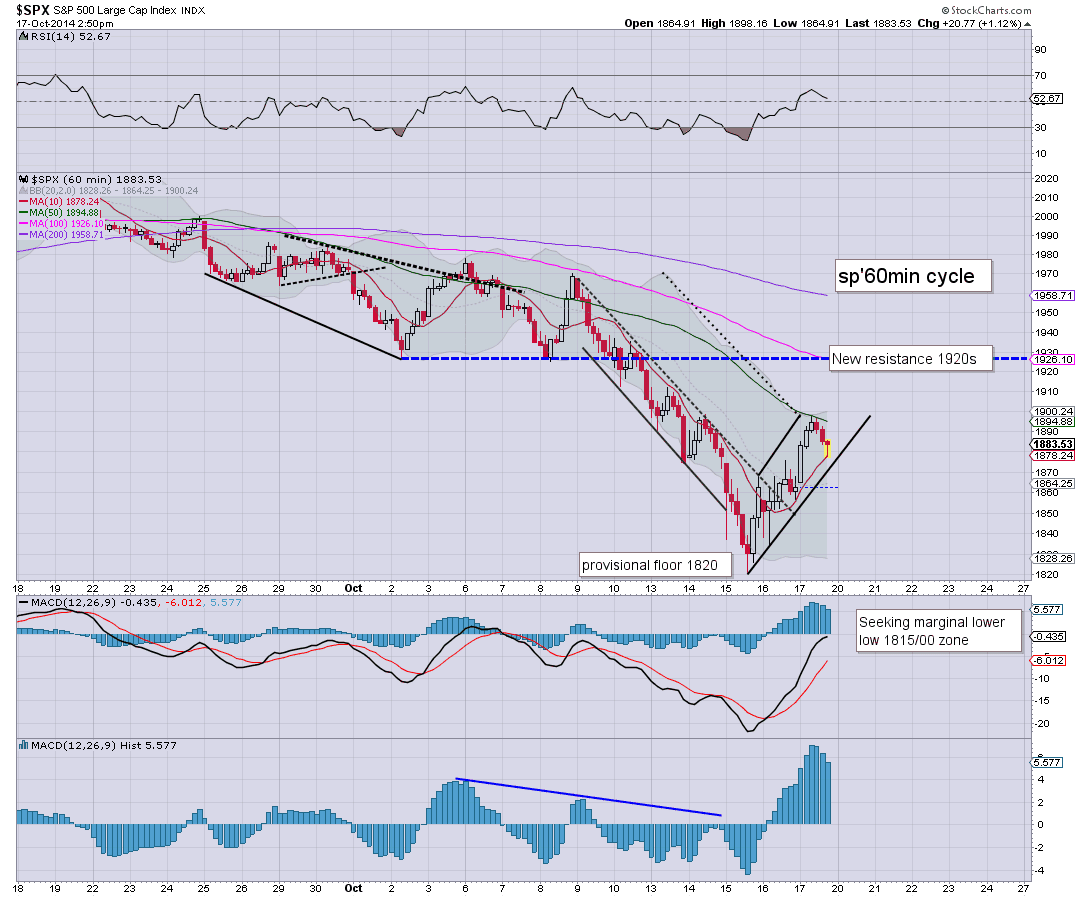 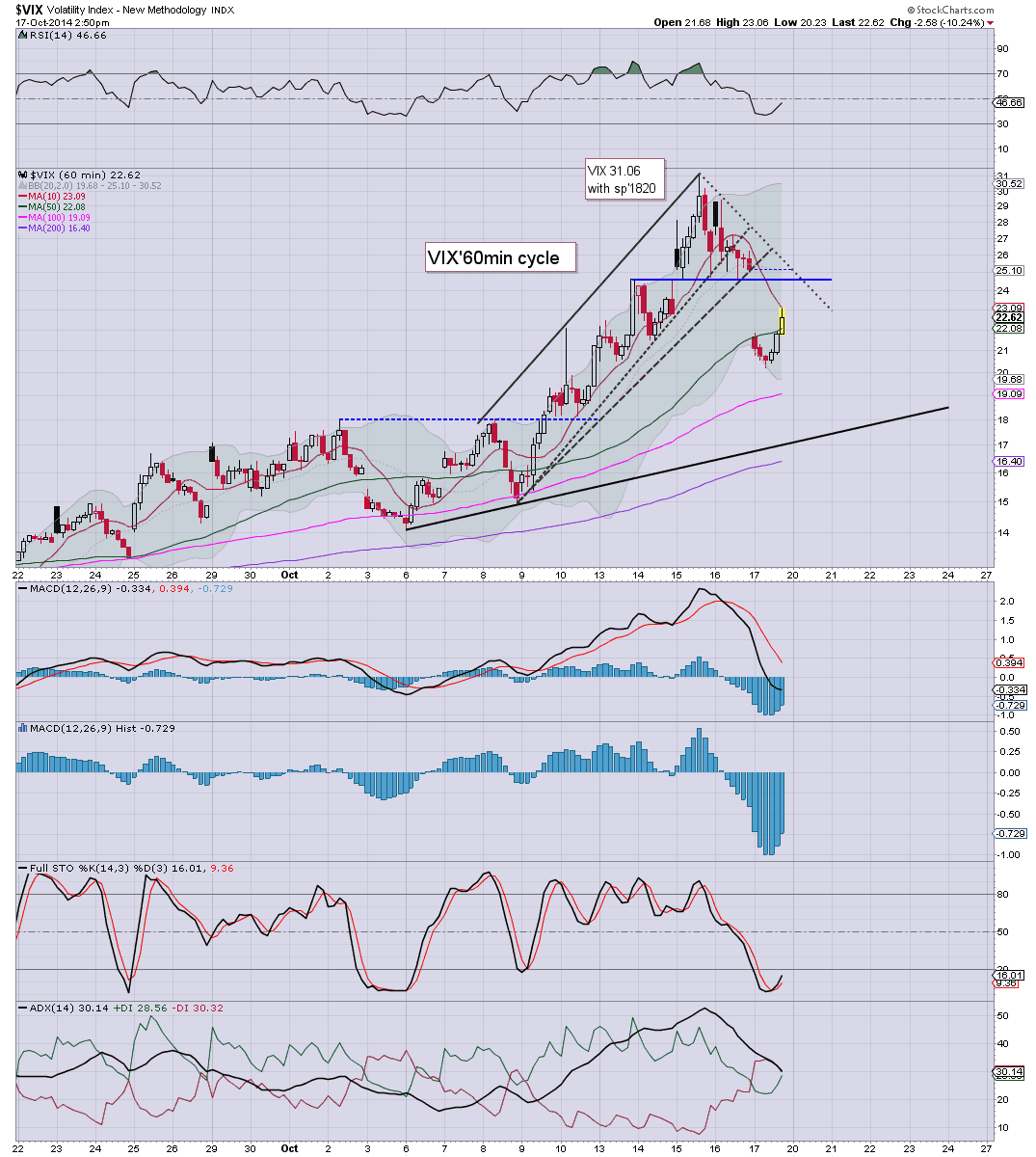 Its been one hell of a dynamic week..  with sp'1820, and a VIX of 31. Just a month ago that seemed impossible to almost everyone... including yours truly.
-

With one hour to go, equity bears should be looking at least for a close <1880.. something in the 1875/70 zone would be 'useful', and would break the near term up trend.

This is starting to get real annoying.

oh well, at least volatility is back...  so the weeks ahead won't be dull.

back at the close...
Posted by Trading Sunset at 19:52:00
Email ThisBlogThis!Share to TwitterShare to FacebookShare to Pinterest

US equities have cooled somewhat from the earlier high of sp'1898, but still remain hugely above the Wed' low of 1820. VIX is clawing back some of the declines, back in the 21s. Notably, the R2K has turned fractionally negative. 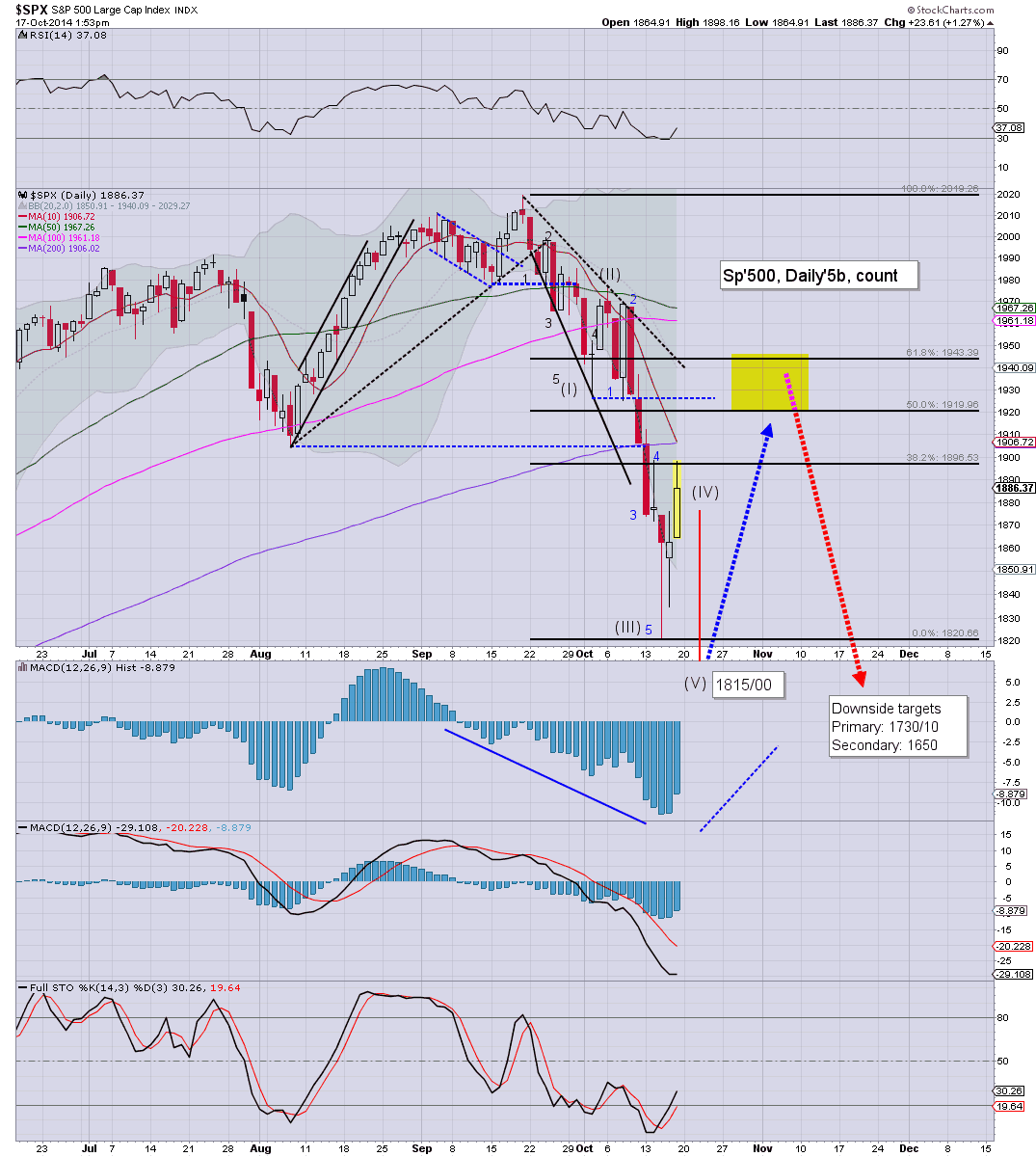 *chart 5b remains 'best guess', but I realise after this mornings huge gains, many would be completely dismissive of it.
--

Still two hours to go of a crazy week... bears need to break back under 1880

NFLX -3.5%, despite Cuban calling into clown finance TV to pump his latest 'I will never sell' investment.

R2K -0.3%... pretty weak, exhausted on the buy side?
Posted by Trading Sunset at 18:54:00
Email ThisBlogThis!Share to TwitterShare to FacebookShare to Pinterest

1pm update - still within near term up trend

Equities continue to hold within the near term up trend, having ramped from sp'1820 to 1898. VIX has so far managed to hold the key 20 threshold. Oil is holding moderate gains, +0.4%, but well below opening levels. 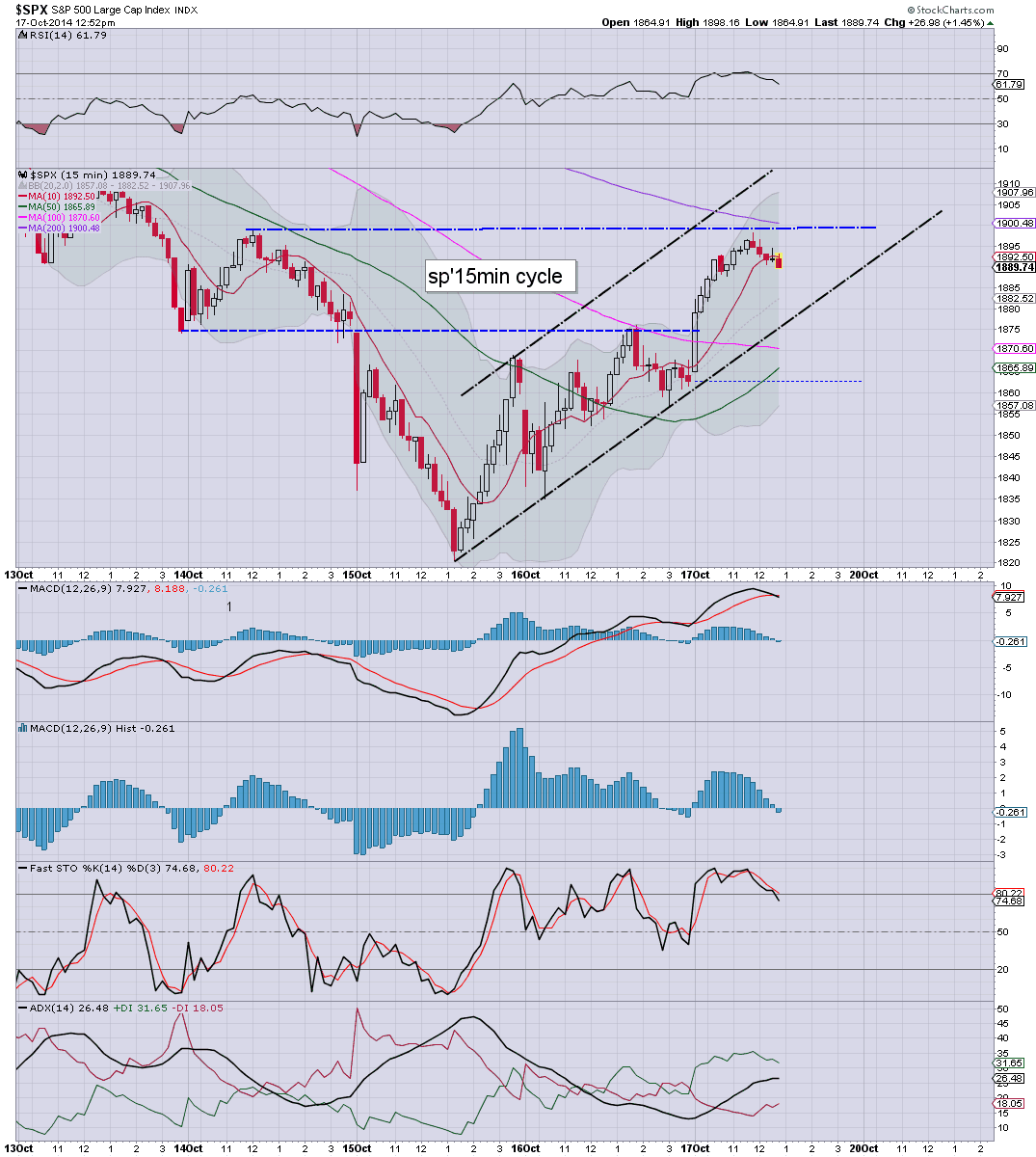 Suffice to say, 3 hours to go of what has been a wacky week.

VIX clawing back...if slowly... 22s look due.
Posted by Trading Sunset at 17:54:00
Email ThisBlogThis!Share to TwitterShare to FacebookShare to Pinterest

US indexes continues to battle higher, with the big sp'1900 threshold set to be tested. VIX continues to melt lower, -19% in the 20.20s. With the capital markets in a calmer mood, precious metals are weak, Gold -$6, whilst Oil is holding moderate gains of 0.6%. 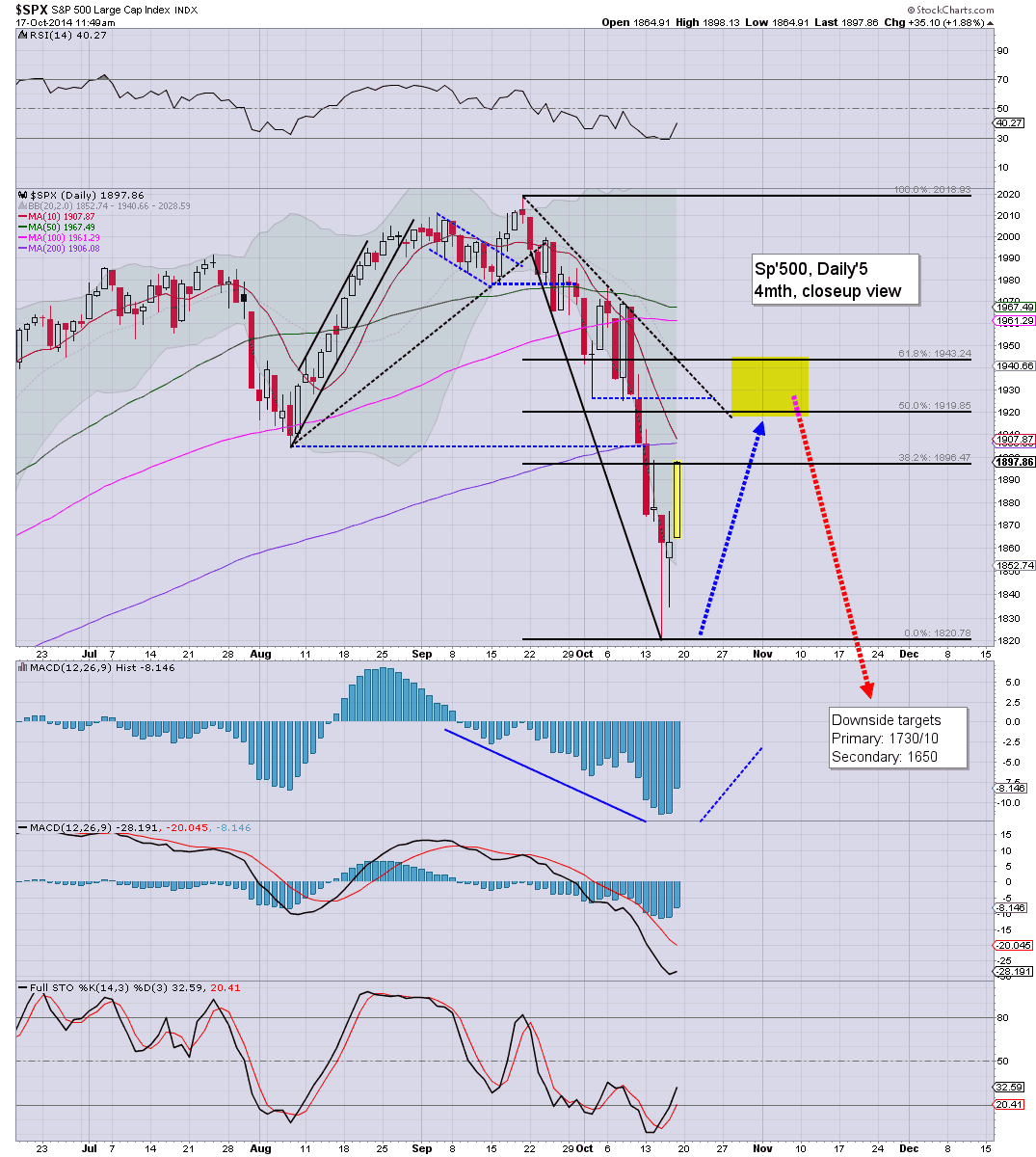 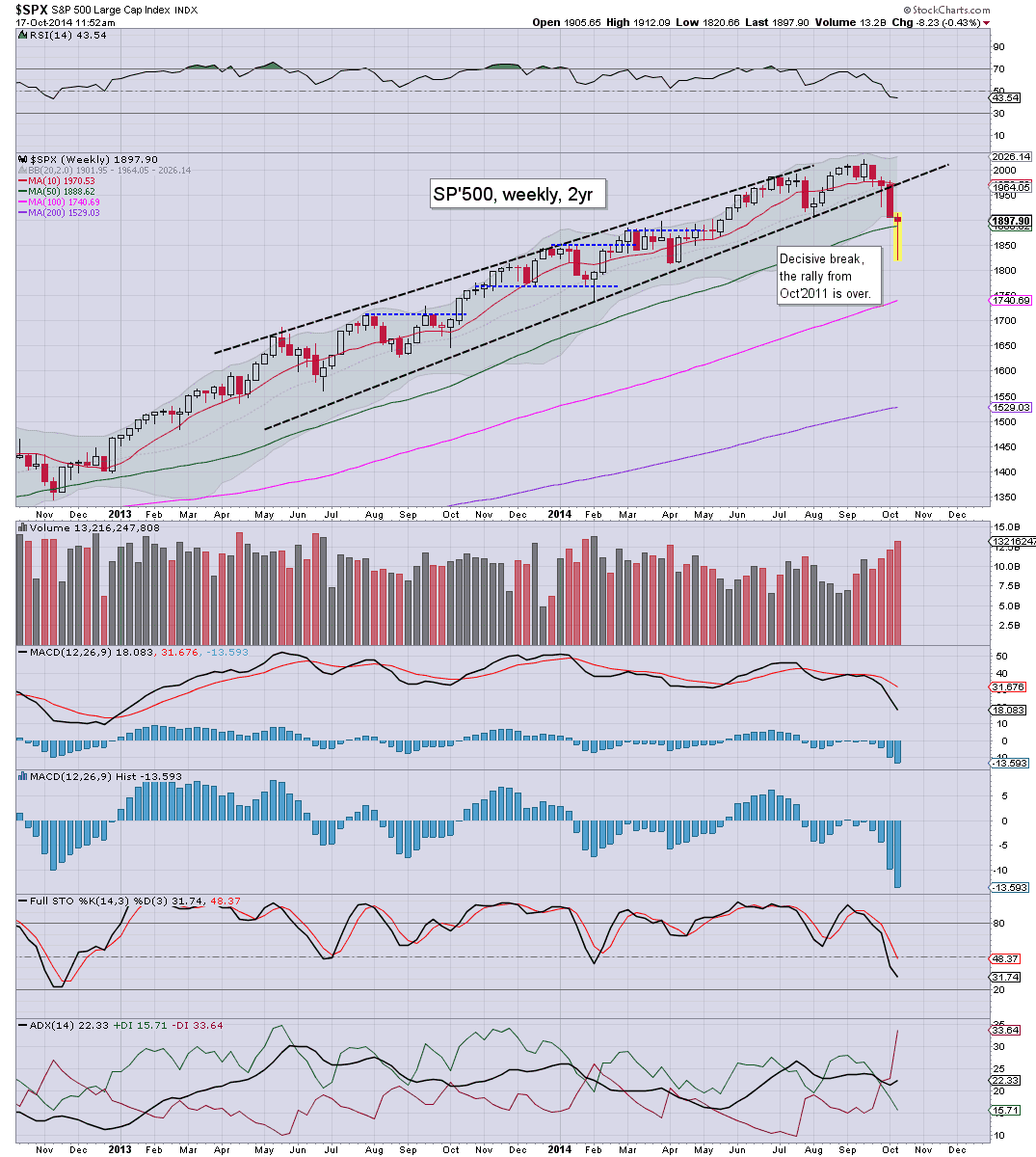 *what is especially bizarre is seeing the weekly charts getting close to net weekly gains. The Trans/R2K already are.
--

Well, its clearly getting rough now for those currently short.

Those who believe a key low has been set at sp'1820 should be seeking a straight run to 1920/50 zone.. although I realise, a fair few are completely giving up.. and looking for new historic highs before year end.

Considering the monthly cycles... I still can't agree with that, even with this latest run of almost 4% in just over two days.


--
time for tea.. or something sedative.
Posted by Trading Sunset at 16:56:00
Email ThisBlogThis!Share to TwitterShare to FacebookShare to Pinterest

11am update - market teasing the bulls

US equities have managed a 62pt (3.1%) rally to sp'1892 across just 12 trading hours, and there are already many calling for new historic highs. Yet, this is likely Mr Market just teasing (for once) the bulls. VIX remains smacked lower by -17%, just managing to hold the 20 threshold. 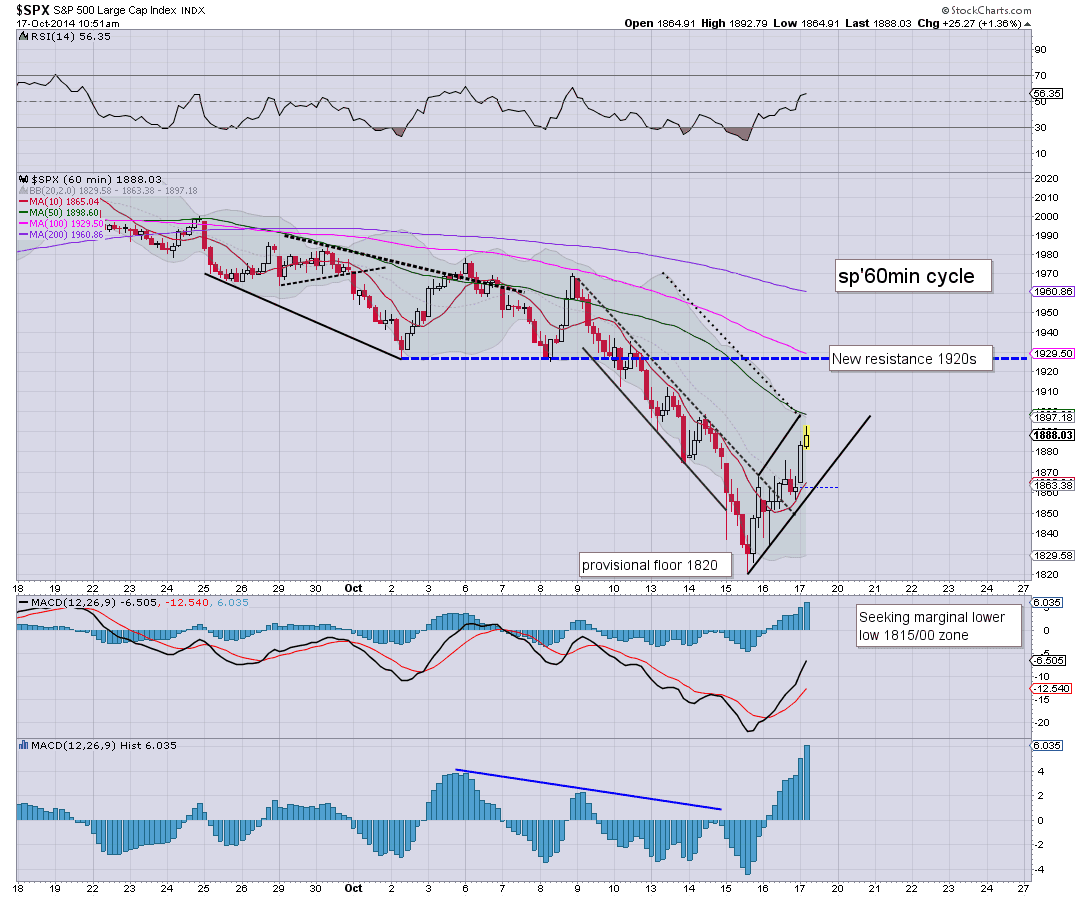 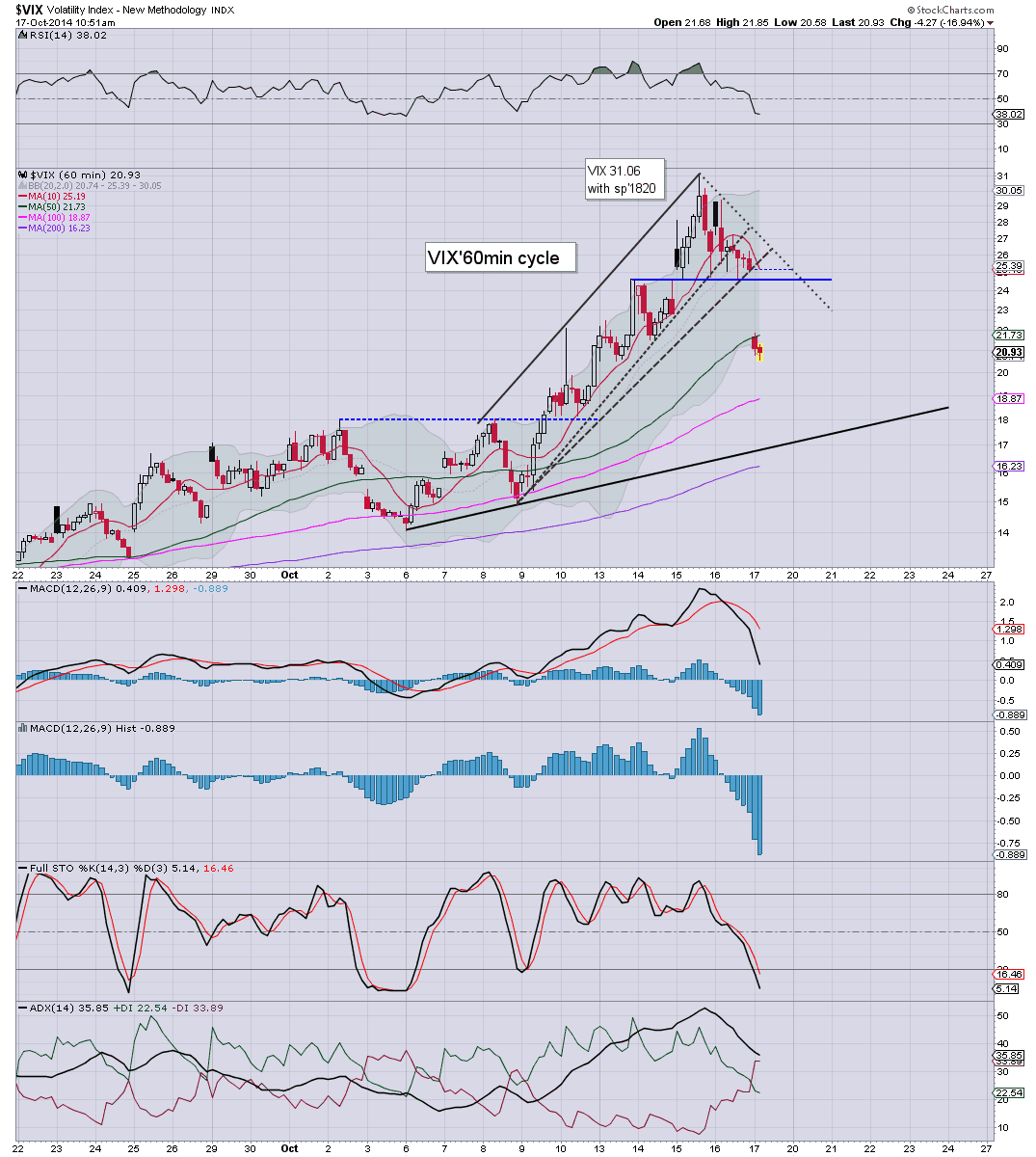 At the very least, equity bears should be seeking a weekly close back under 1870... which frankly, is not expecting too much, considering the recent intraday swings.
- 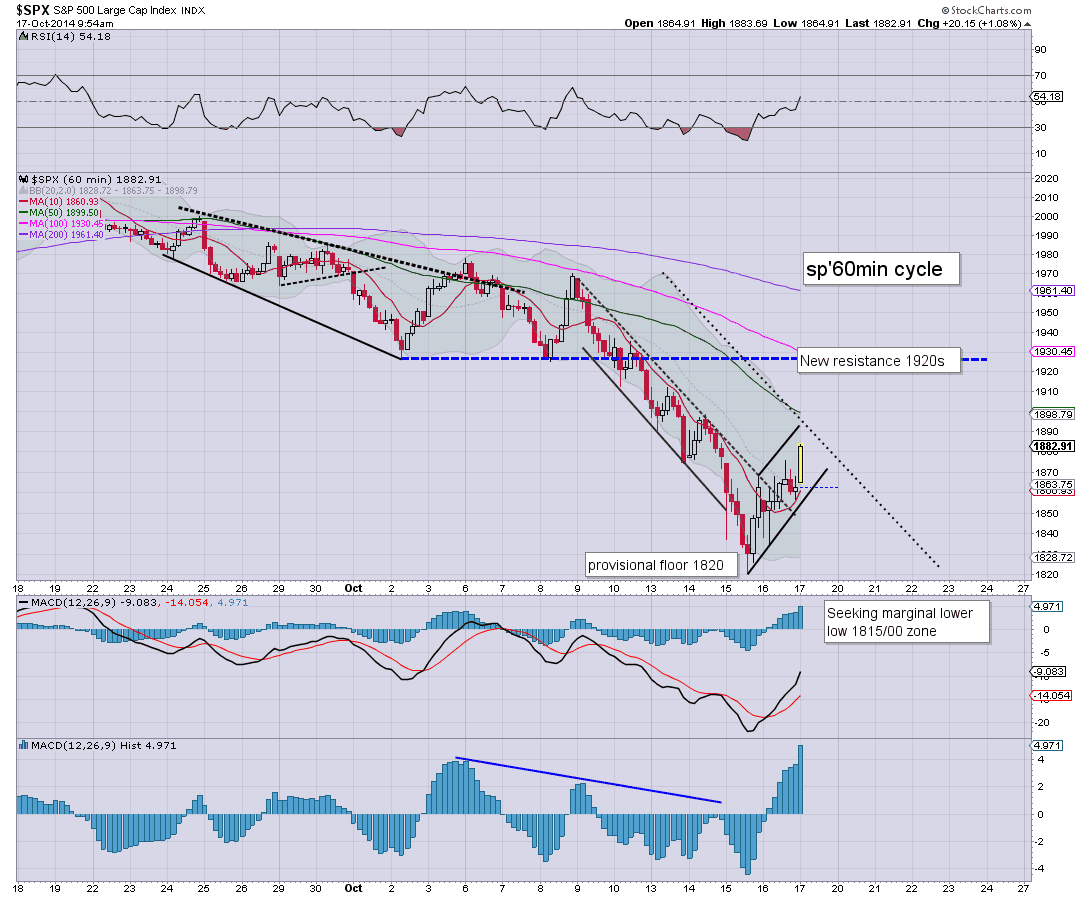 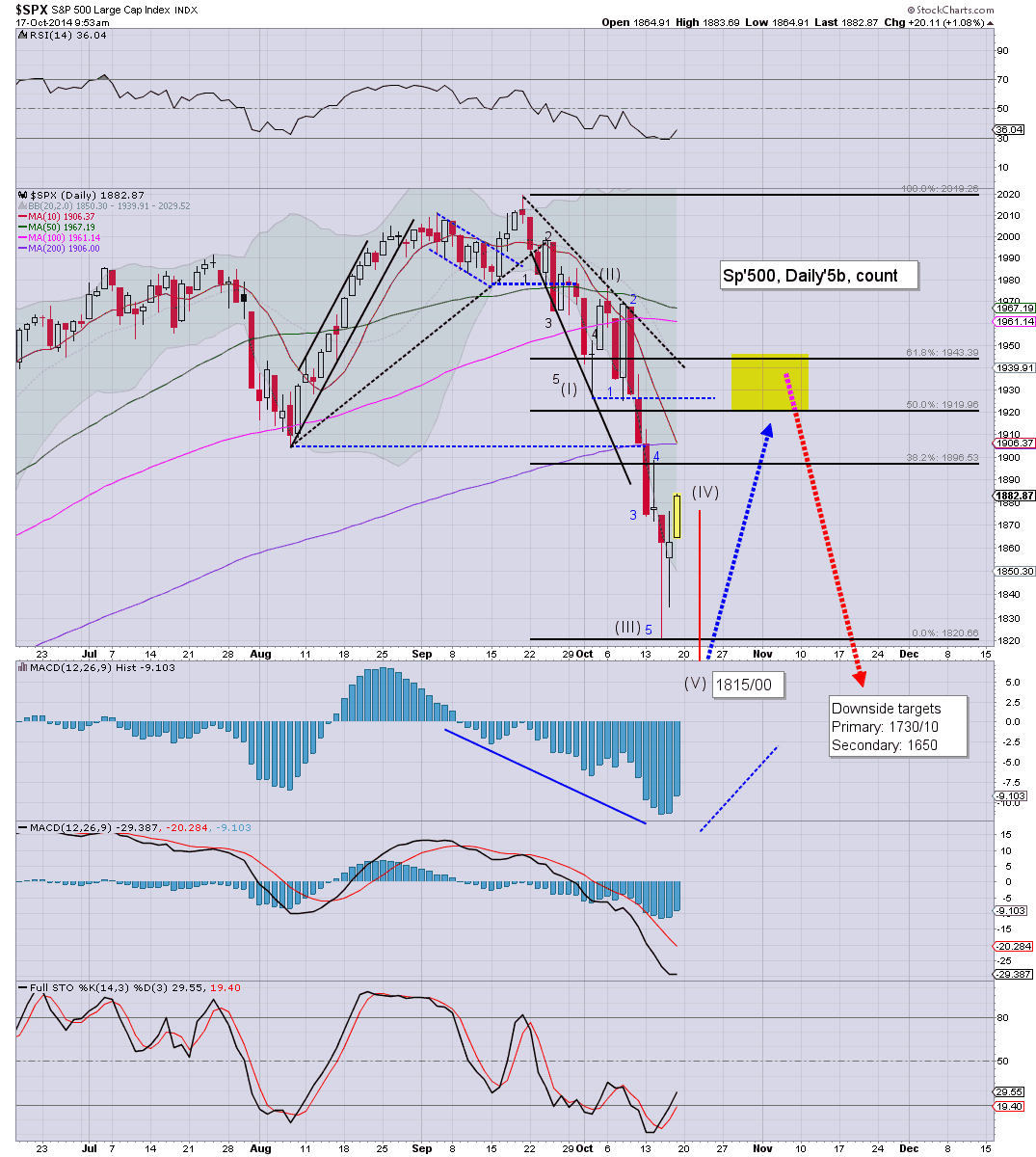 Barring a daily close much above current levels, I'm holding to the original outlook.

We've seen so many sharp swings across the past four weeks, why would today be any  different?

The fact it is opex, will only add to the volatility.. especially this afternoon.

stay tuned.
Posted by Trading Sunset at 14:56:00
Email ThisBlogThis!Share to TwitterShare to FacebookShare to Pinterest

Good morning. Futures are significantly higher, sp +19pts, we're set to open at 1881. Metals are weak, Gold -$3. Oil is strongly higher for a second day, +1.7%. Recent price structure is still suggestive of a further equity wave lower, before a sustained rally is possible. 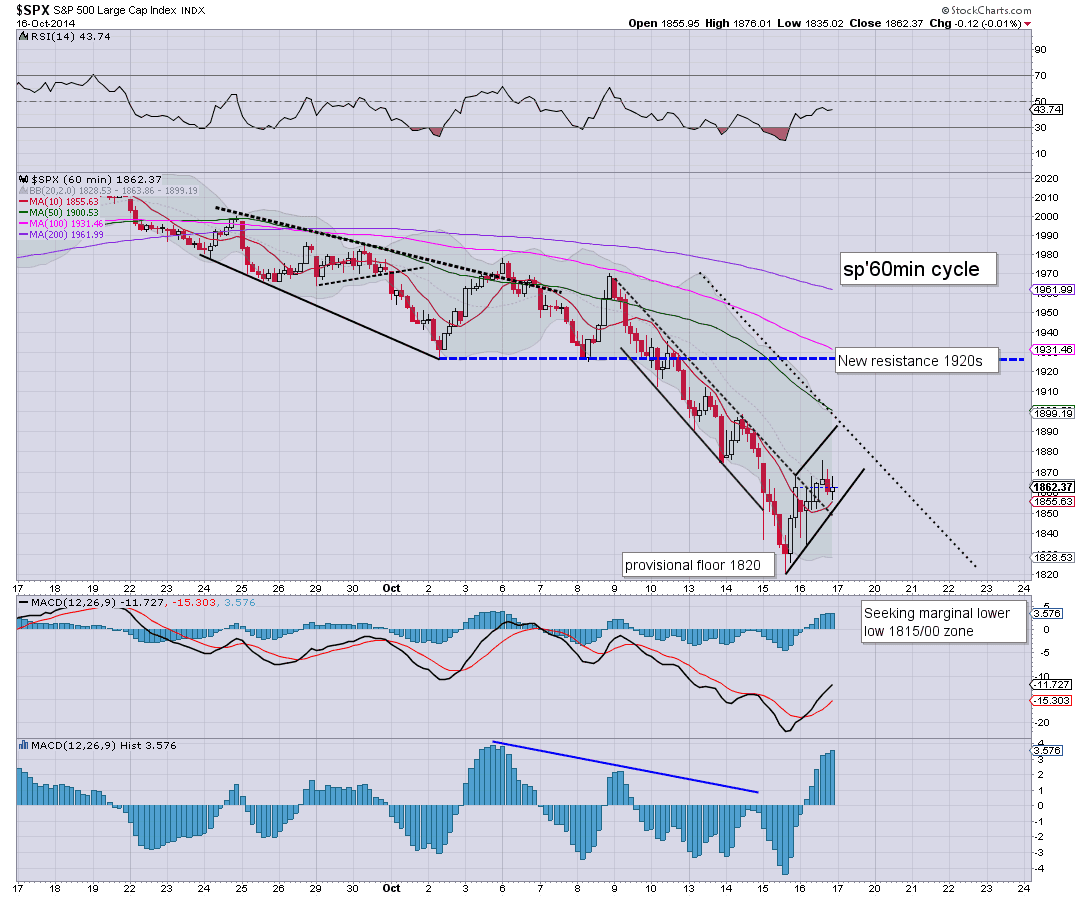 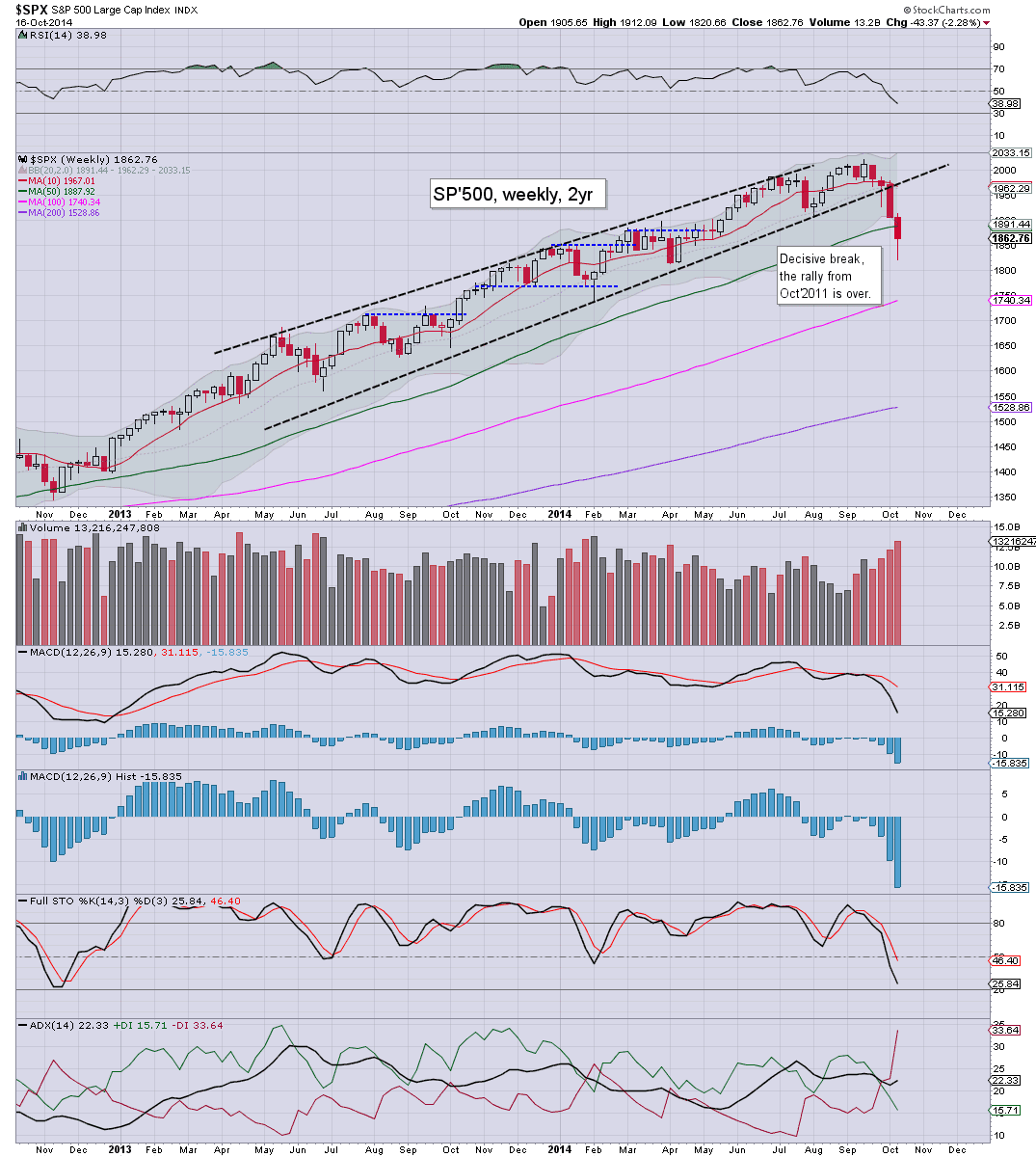 *even with a higher open, price structure on the hourly chart is still a rather clear bear flag
--

So, we're set to open higher, and not surprisingly, I'm already seeing talk of 'new historic highs' within the next few months.

Frankly, to me, this seems ludicrous. One up day, and everyone already loses sight of the bigger picture... seriously?

Equity bears should look for at least a moderately red close. Considering the likely opening gains, the notion of a break <1820 looks out of range for today... so.. those seeking 1815/00 zone, are going to need to wait until next Mon/Tuesday.

On any basis, the broader market is set for a net weekly decline, the fourth consecutive down week.

--
Doom chatter to end the week from Hunter

--
Have a good Friday
Posted by Trading Sunset at 12:47:00
Email ThisBlogThis!Share to TwitterShare to FacebookShare to Pinterest 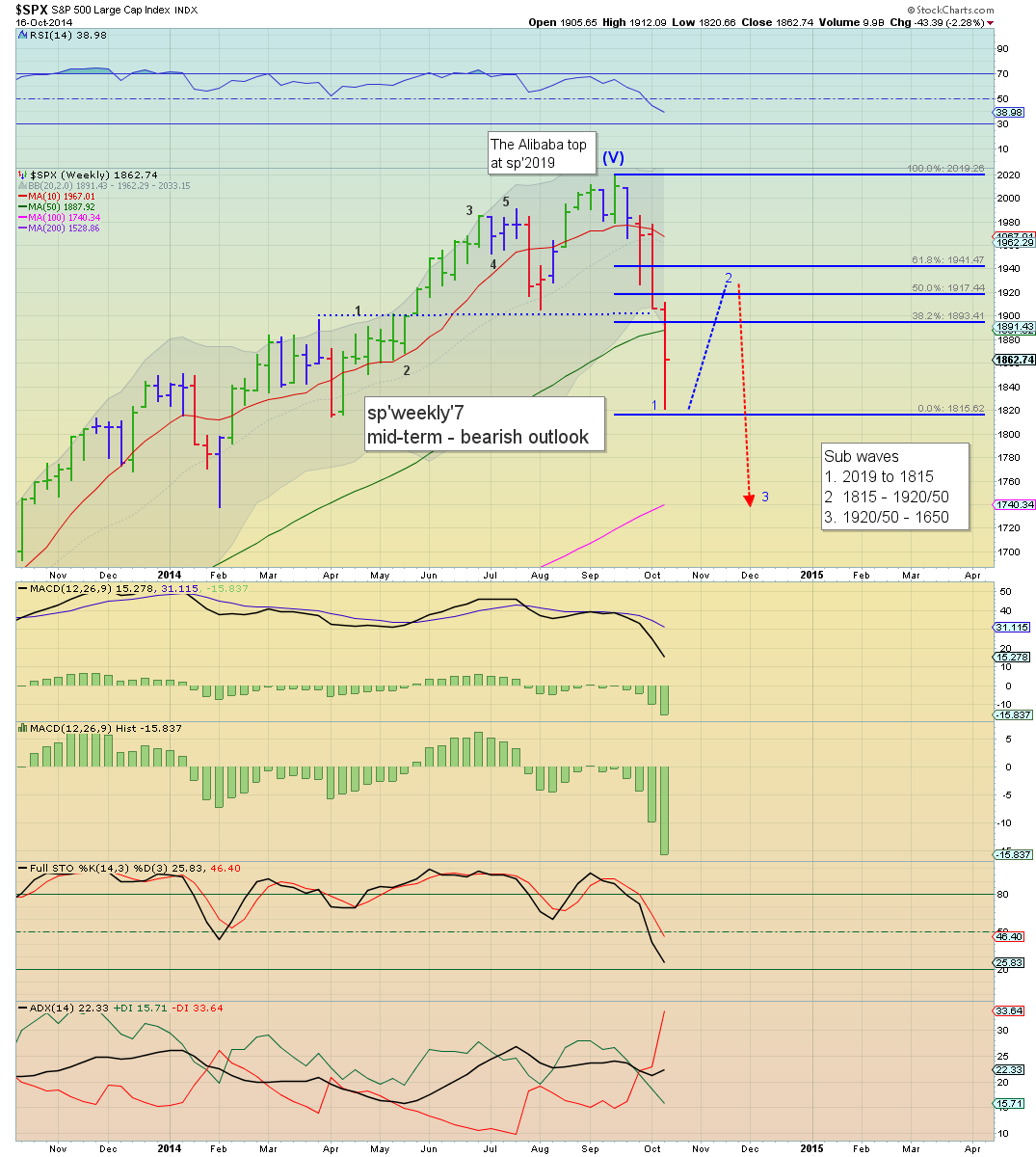 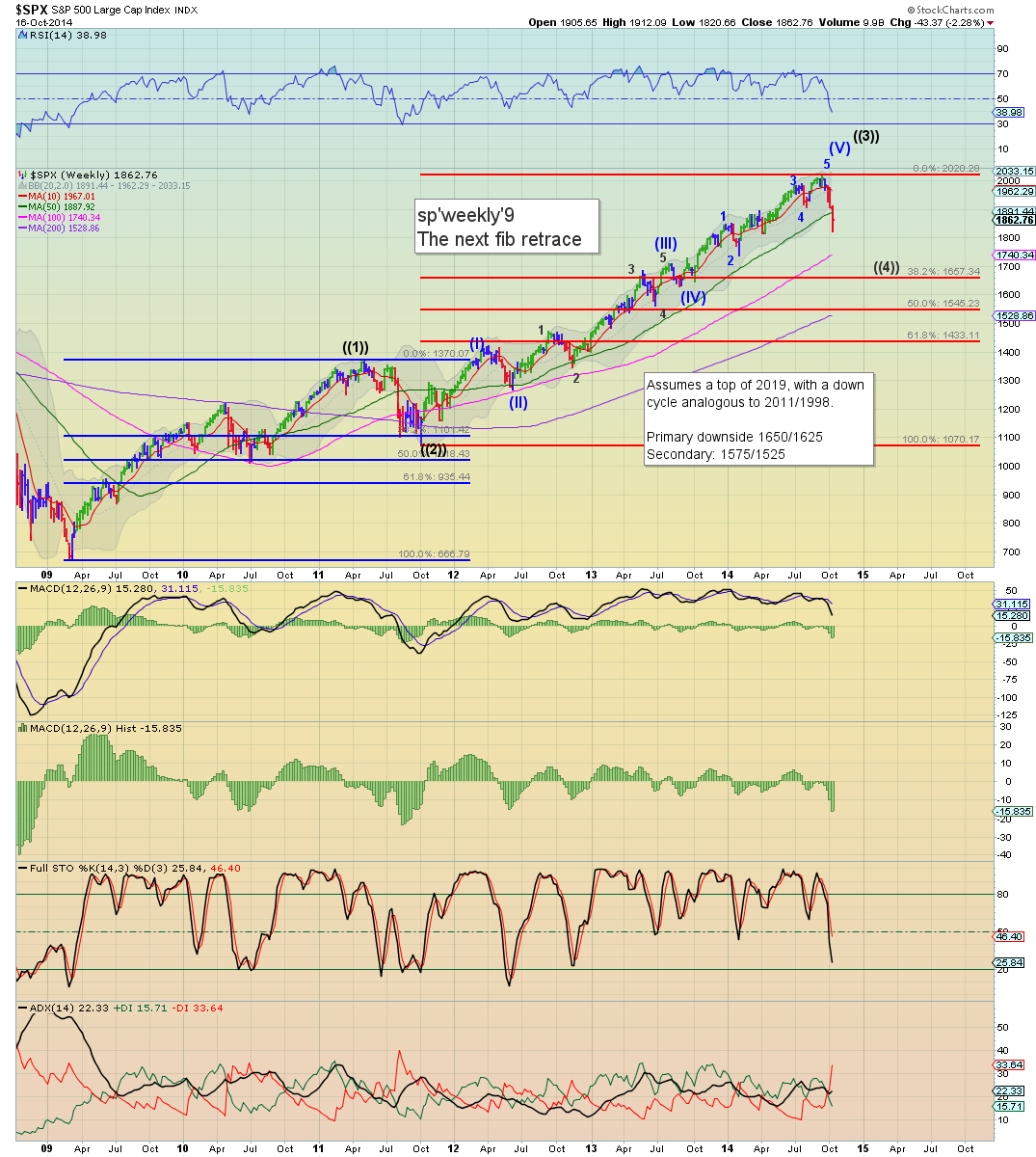 Market looks set for a marginally lower low (but not all indexes) tomorrow/early Monday. From there, a major bounce... but a bounce...is all it will be.
--

The week concludes with housing stats and consumer sentiment. The Yellen is due to speak in early morning on 'inequality of economic opportunity'. I don't expect that to be of any real importance.

Tomorrow is opex, so expect some extra chop, especially in the late afternoon! 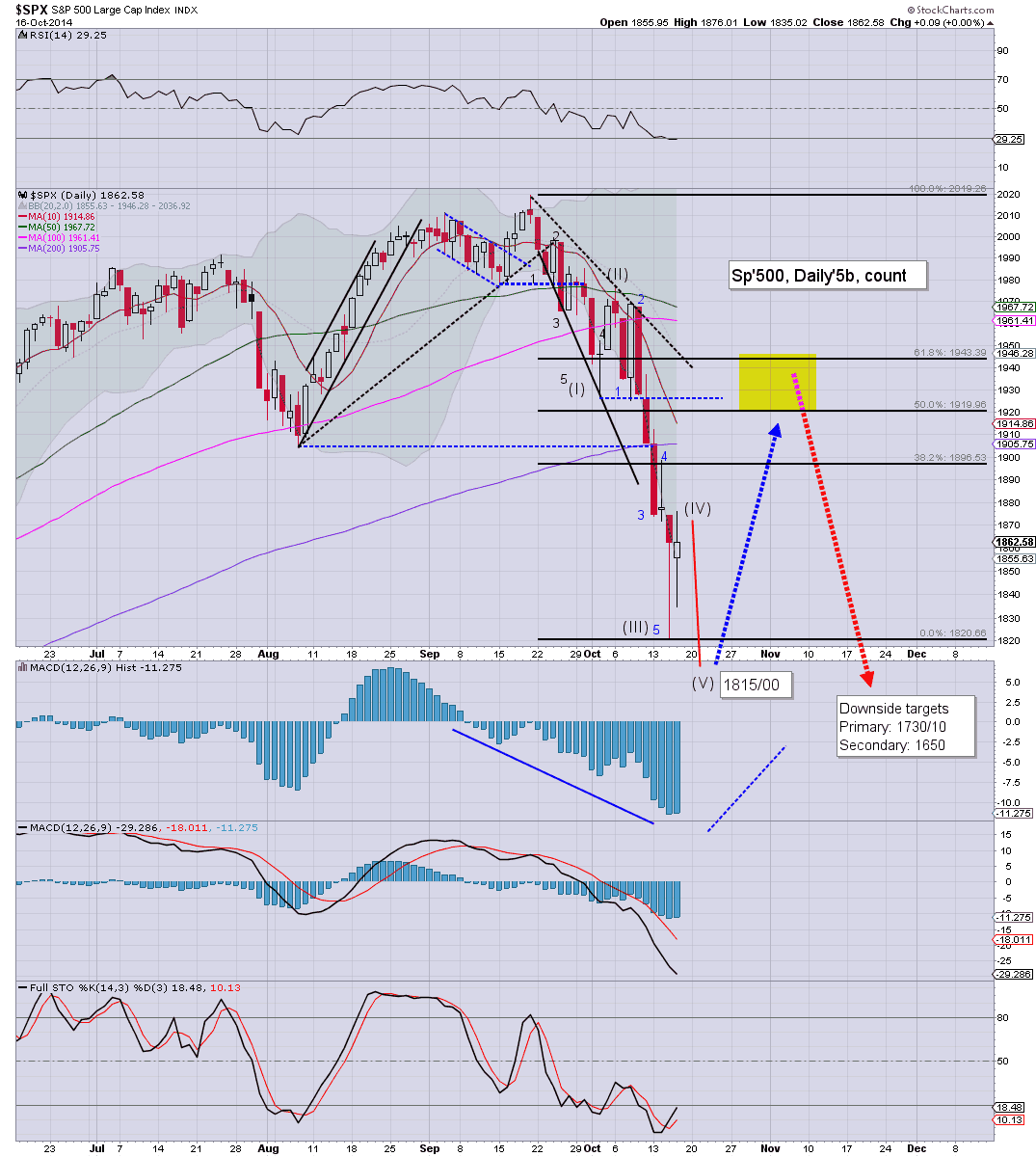 The Dow notably closed lower for the sixth consecutive day, I'm not sure how long its been since that kind of downside.
--

Suffice to say, a day of swings, a strong rally into the afternoon, but late day 'moderate' weakness.

The two leaders - Trans/R2K, continue to suggest a key low in the broader market is increasingly close.