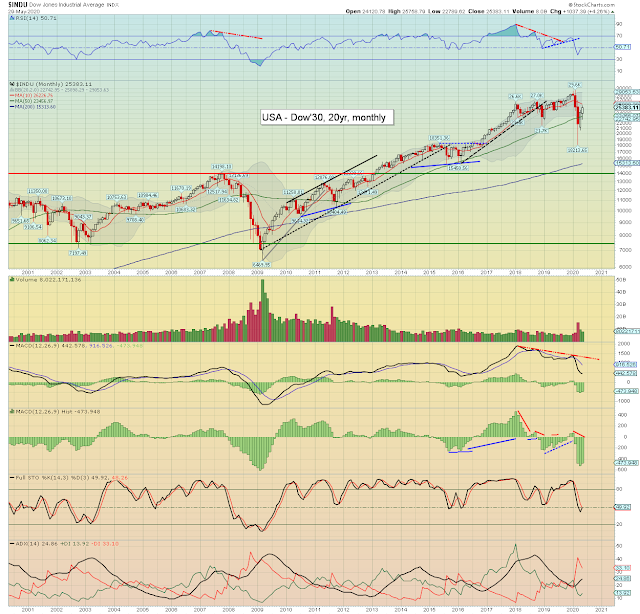 The mighty Dow settled +1037pts (4.3%) to 25383. The key 10MA stands at 26226, and (under my criteria) May still made for a bearish monthly settlement. Note the MACD (green bar histogram) cycle, as price momentum is starting to tick back upward. Even if price continues broadly upward, its going to take at least 5-6 months before momentum turns positive. 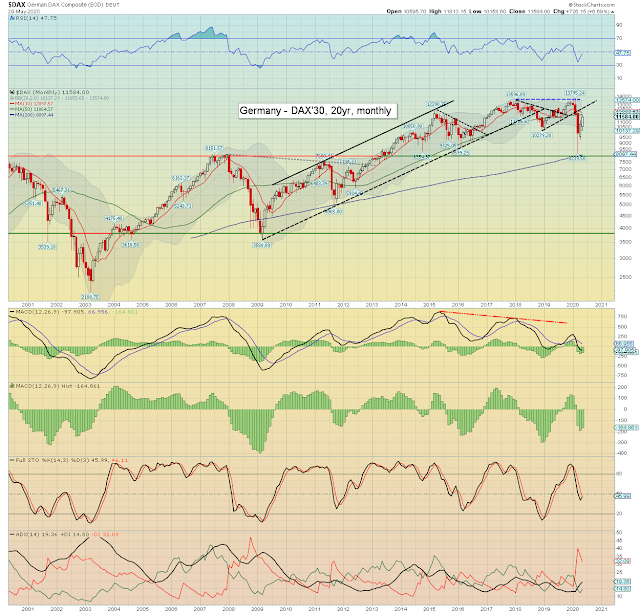 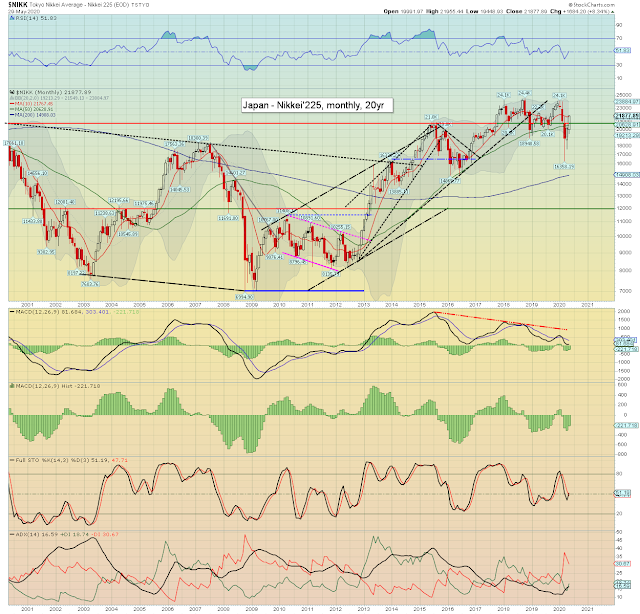 The Japanese market climbed very powerfully higher, settling +1684pts (8.3%) to 21877, a notable close above the key 10MA. At the current rate, momentum will turn positive by late July/August. 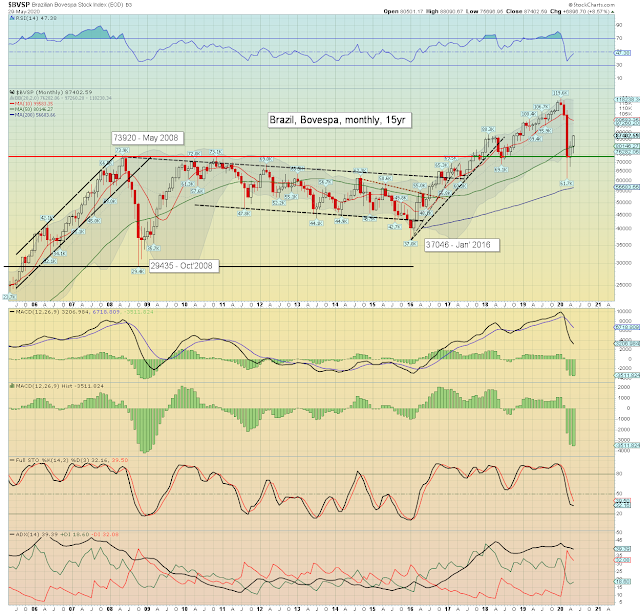 Brazilian equities lead the way higher in May, settling +6896 (8.6%) to 87402, although that still made for a bearish monthly settlement under the 10MA. 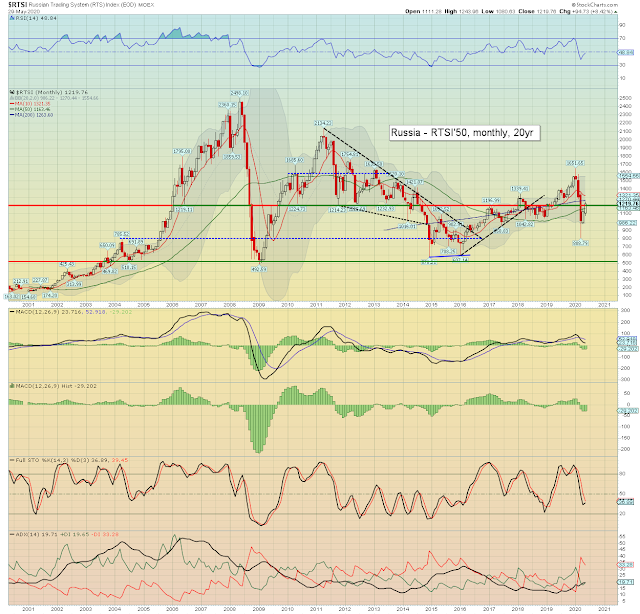 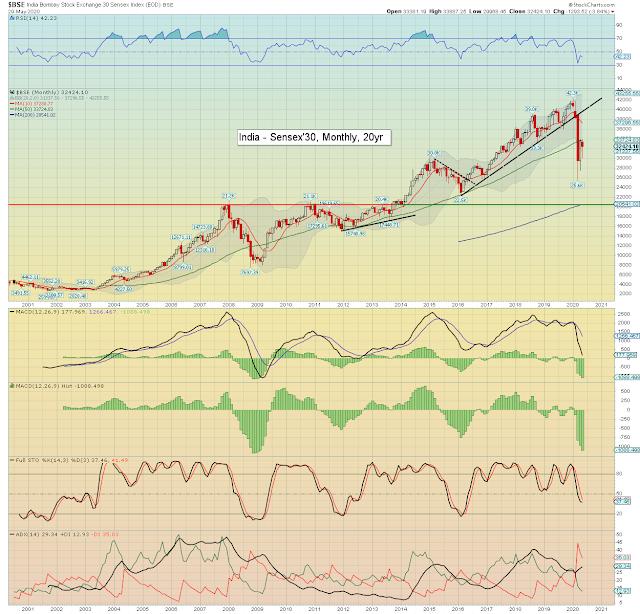 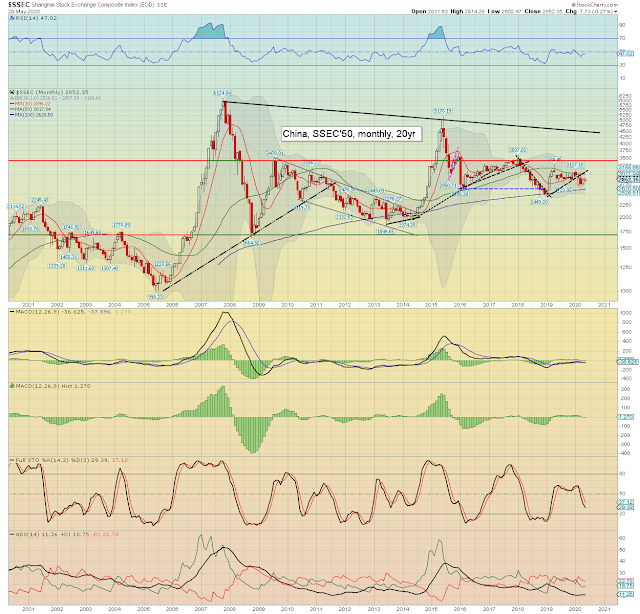 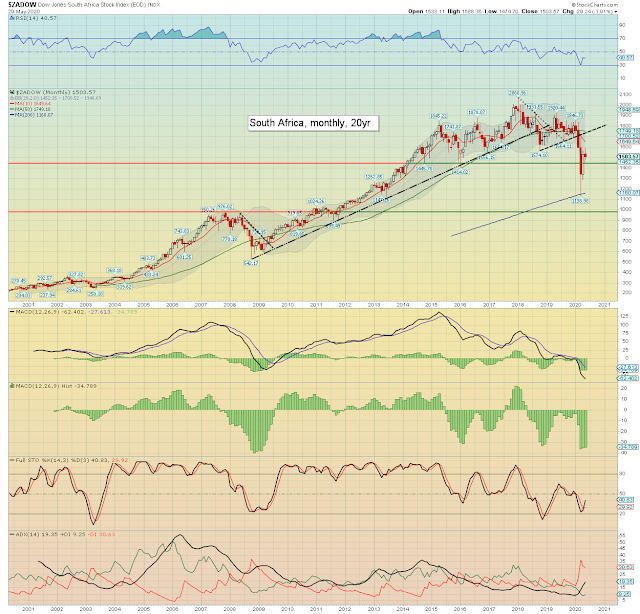 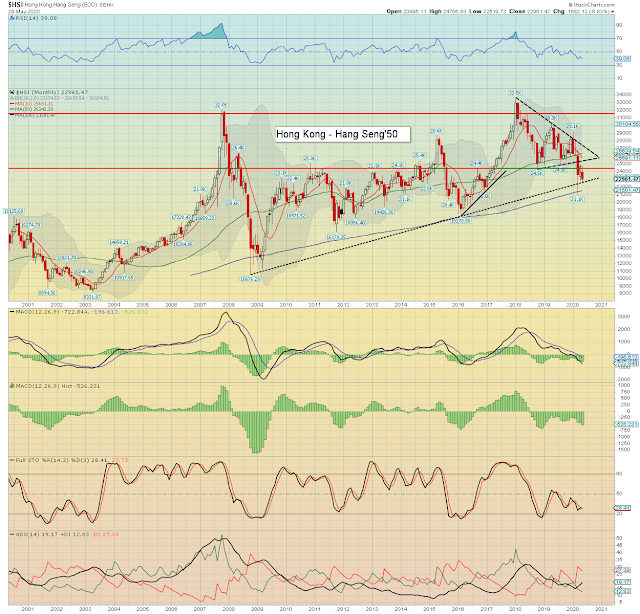 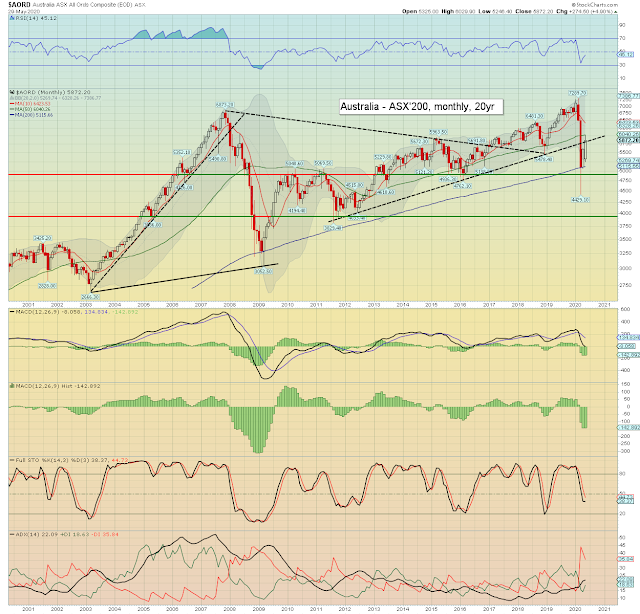 Australian equities climbed for a second month, settling +274pts (4.9%) to 5872, but that still made for a fourth consecutive bearish monthly settlement under the 10MA.
–

Nine markets remain under their respective monthly 10MA, the exception was Japan.
-

There will be a light sprinkling of earnings, but a fair amount of econ-data, especially in terms employment... or rather, the lack of.

Although the Dow didn't manage a bullish monthly settlement above the monthly 10MA, the SPX and Nasdaq comp' notably did. On balance, the Dow can be expected to follow within the next few months.

Whilst the lockdown restrictions are being broadly lifted, its left a broken and deeply traumatised populace, especially within Europe and North America. The collapse in USA GDP across Q1/Q2 likely amounts to around -40%. Even if you assume half of that is recovered in Q3/Q4, that still makes for a devastating net 2020 decline of -20%. On any basis... 2020 is to be seen as a depressionary year.

Yet the equity market doesn't care, as its being juiced by $3trn of Fed QE, never mind the ongoing REPOs. We didn't forget about the latter, did we? Ironically, even the mainstream cheerleaders appear somewhat embarrassed at the strength of equities, whilst the economy remains in a horrific state.

Such a depressionary economy and a traumatised populace make for a tinder box of social unrest. The death of George Floyd has been the spark, and some are starting to recognise that this summer is going to be a hot one.

The market will be unsettled by such mass social unrest, if only briefly. After all, more US Govt' stimulus appears on the menu, and the market will be delighted with another few trillion of Fed QE.

There is increasing background chatter about eventual inflation and a jump in bond yields/rates, but for now... there are far more important things to focus on. We have truly wild times ahead... in the twilight zone.