Despite US equity indexes closing moderately lower, the VIX remained in cooling mode, settling lower for a fourth consecutive day, -3.0% @ 21.64. Near term outlook offers a minor bounce to the 22/23s, but it would seem the sp'1950/60s will equate to VIX back under the key 20 threshold. 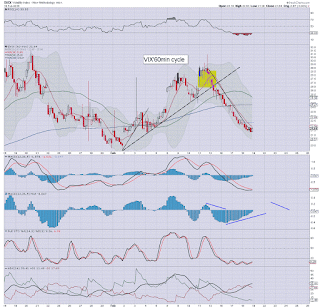 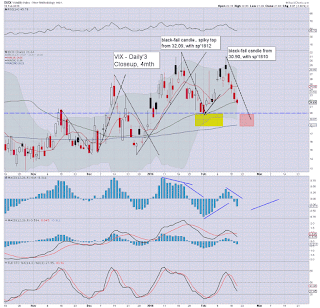 Suffice to add.. it was one of those days when despite the sp'500 swinging from a minor opening gain to 1930.. and declining to 1915, the VIX was still unable to rally. 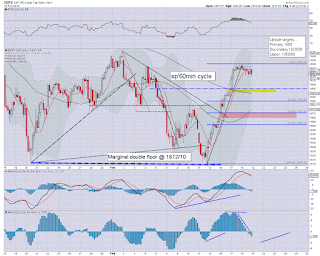 *closing hour action: a lot of micro chop, but with increasing weakness into the close, a new intra low, which bodes in favour of the bears for early Friday.
-

The underlying MACD (blue bar histogram) equity cycle is now negative.. and there should (in theory) be slightly more downward pressure across tomorrow morning.

It would seem.. at best.. the sp'1900 threshold - the Wed' opening gap (yellow zone), before resuming higher next week.

Despite a swing from sp'1930 to 1915, the VIX has remained moderately lower for almost the entire day. For now, there is simply no significant downside power from the equity bears, and even the 1900 threshold is looking a little difficult tomorrow morning. Metals have cooled a little from earlier highs, Gold +$22, with Silver +1.2%. 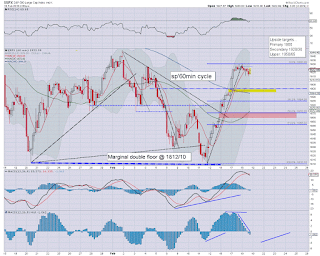 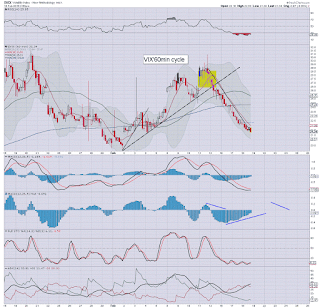 Broadly... its one of those days where its arguably a case of 'turn ya screen off until next Monday'.

So.. 1950/60s.. or around the 2K threshold... it really seems to be one of those two..... with the bigger weekly cycles suggestive of a mid March turn... which would favour the 2K believers.

--
notable weakness.. TVIX -2% in the $9.40s.. as there just isn't any real hope of major market upset in the near term. VIX is apparently already settled into 'melting into the weekend' mode.
--

My closing post last evening was 'Are we here?'

Zerohedge was leading earlier with 'You are here'.

Another wave lower in Gold - and by default... the miners... before hyper-upside this spring.
Posted by Trading Sunset at 19:51:00
Email ThisBlogThis!Share to TwitterShare to FacebookShare to Pinterest

US equities appear increasingly vulnerable into the close.. and across at least the first half of tomorrow. First downside target is the sp'1900 threshold. The lower gap of 1871/64 looks out of range in the near term. Metals have built very sig' gains, Gold +$27, and that is helping the related mining stocks. 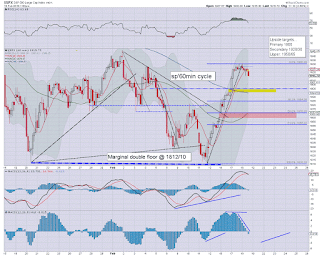 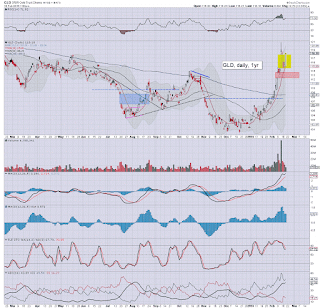 So.. a weakening equity market.. with renewed interest in gold/silver/miners. 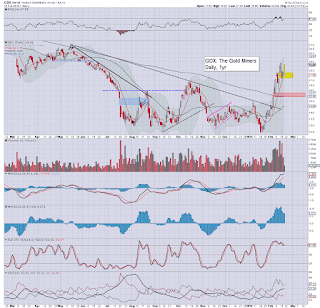 With equities cooling, the precious metals are attracting renewed interest... although it is very likely an unsustainable gain in the near term.
Posted by Trading Sunset at 18:52:00
Email ThisBlogThis!Share to TwitterShare to FacebookShare to Pinterest

The sp'500 is due to see a bearish MACD cross at the start of the 1pm hour..and it threatens increasing weakness into the close. Right now, a retrace to the sp'1900 threshold looks probable, perhaps 1884.. on an added 'excuse' tomorrow. 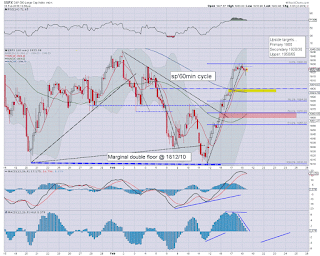 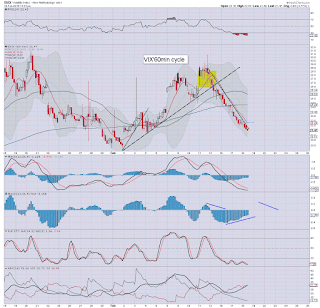 Most notable right now is the VIX. which continues to manage to break new cycle lows. Its pretty bizarre, but then.. there is clearly no significant equity downside power.

It'd seem the VIX traders recognise higher levels to sp'1950/60s are indeed due.... regardless of any short term retrace. 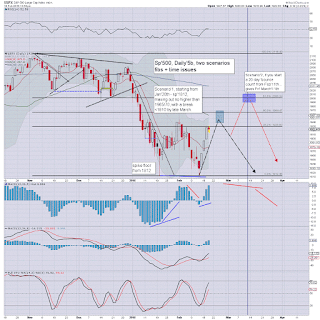 Thoughts welcome.. although I realise some have been saying 2K for many weeks.
Posted by Trading Sunset at 17:52:00
Email ThisBlogThis!Share to TwitterShare to FacebookShare to Pinterest

Having ramped from sp'1810 to 1930 across just 5 trading days, it would seem a moderate retrace is underway, with a basic target of the 1900 threshold. Oil is causing problems for the main market, swinging from gains of 3% to fractionally negative. 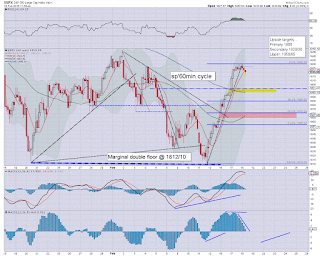 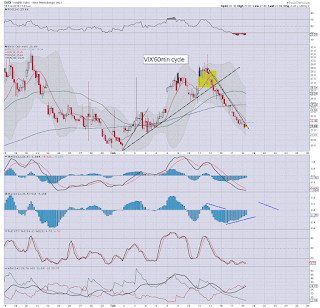 *an equity bearish MACD cross (with a bullish VIX cross) is due within an hour or two, and the algo-bots should be selling into that technical signal
--

With Oil inventories showing a net weekly surplus of 2.1 million barrels - very much contrary to the API report, the early oil gains have vapourised, and that is not surprisingly dragging the broader market lower.

The underlying issue of over-supply has not in ANY way been addressed, and it remains utterly laughable that talk of merely stabilising supply is now supposedly bullish for prices.

--
time for lunch
Posted by Trading Sunset at 16:52:00
Email ThisBlogThis!Share to TwitterShare to FacebookShare to Pinterest

11am update - are the mainstream getting twitchy yet?

With the market not significantly higher for a fourth consecutive day, some of the mainstream will no doubt be getting a little twitchy. They will (understandably) be asking if sp'1810 was really a key low for the year, or if this recent bounce is just that..... a bounce. Oil is +3.0% ahead of the EIA report... due at 11am. 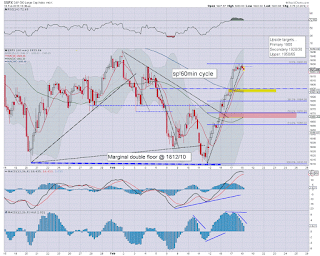 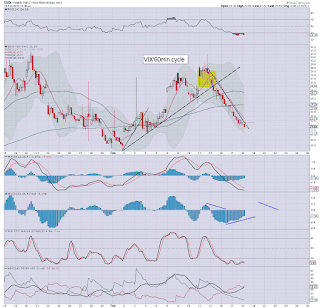 *VIX breaks a new cycle low of 21.72, which is wrecking hopes of even moderate equity downside this afternoon.
--

It could easily be argued though.. we've a short term top... due a retrace - probably no lower than the sp'1900 threshold.

However, the daily cycle remains powerfully bullish, and I'd be concerned about launching any shorts from current levels.

*will update a daily chart later... as I do realise 2K is a threat.... although still looks difficult.

After yesterday's grey horror, today is better.. and yet more cranes are appearing. The London crane index must be close to historic highs... and that usually marks a cyclical peak.

In any case....we ain't closing significantly higher for a fourth day.

VIX is STILL fractionally negative.... pretty bizarre.
Posted by Trading Sunset at 15:50:00
Email ThisBlogThis!Share to TwitterShare to FacebookShare to Pinterest 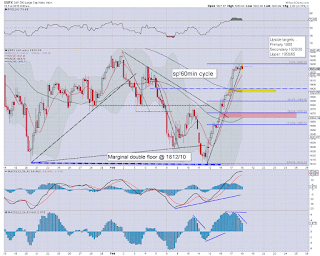 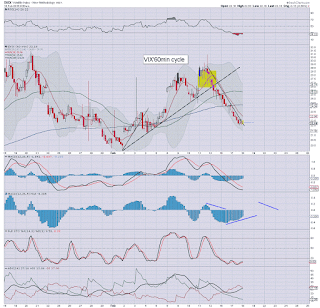 So.. a retrace?  VIX has certainly seen a provisional break of the down trend.

At the current rate, the equity hourly MACD (blue bar histogram) cycle will see a bearish cross this afternoon.

Its a tricky situation to call the near term.. but once the weekly cycles max out around mid March.. then it should get straight forward again. 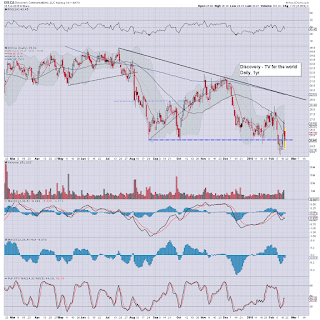 time for some sun... back soon
Posted by Trading Sunset at 14:51:00
Email ThisBlogThis!Share to TwitterShare to FacebookShare to Pinterest 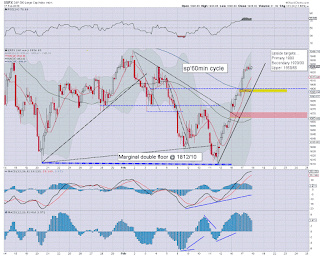 So, we're set to open higher for a fourth consecutive day, and the sp'1940s are very viable today.

Bears continue to get ground out of this market.. as the bigger weekly cycles are burning off the oversold condition.

On any fair outlook, the bulk of the gains have already occurred. Its arguably just a case of waiting for a key rollover by mid March.

--
Update from a bellowing Oscar

No doubt the Elliot wave people will be especially annoyed with him today.
-

notable weakness, GDX -1.5%
Posted by Trading Sunset at 13:04:00
Email ThisBlogThis!Share to TwitterShare to FacebookShare to Pinterest

It was another bullish day for the US equity market, with the sp'500 settling +31pts @ 1926. The market has now climbed 116pts across the last 21 trading hours. It has to be asked though... how much higher will this up wave reach.. and will the next down wave break <1810? 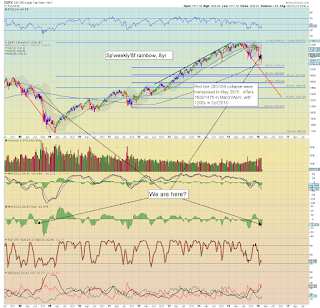 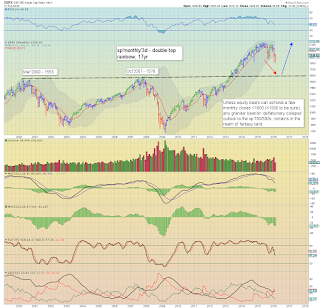 The above chart covers 8yrs.. so I suggest you right click and 'view image' for a closer look.

First... the ultimate issue in my view is whether the current rally stalls.. resulting in a lower high, and then whether the next down wave can break <1810.

Every cycle is unique of course, but the pattern of 2007/08 is unquestionably similar to what we have now.

1. the down cycle flooring in July.... then rally into August
2. a top in late August.

It was with that failure to keep rallying, which then resulted in the market imploding across Sept-November.

*Fed official Williams is due to speak in the late afternoon.
--


Go stare at that for an hour

So... what do YOU make of weekly8f?  The pattern is clearly similar.. and the setup from mid March onward into April offers a potential wave to the 1600s.

We are yet to see capitulation in the oil/gas/mining sector. I'm seeking some mid tier listed companies to file for bankruptcy in the coming months. How much that upsets the world capital markets... difficult to say. What does seem absolutely clear though... sp'1810 - with VIX 30 was no capitulation.

Keep in mind, my original outlook is that the sp'500 will hold the double top of 2000/2007.. aka... no lower than 1600 this spring/early summer. The last three days though, should be a reminder to the bears just how powerfully bullish this market can turn.

US equities closed significantly higher for the third consecutive day, sp +31pts @ 1926 (intra high 1930). The two leaders - Trans/R2K, settled higher by 1.6% and 1.5% respectively. Near term outlook remains broadly bullish, with next resistance to the 1950/65 zone. 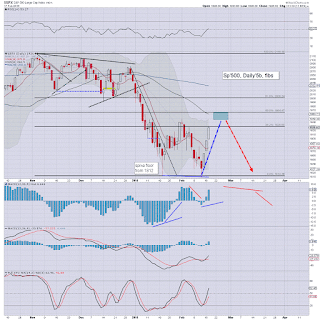 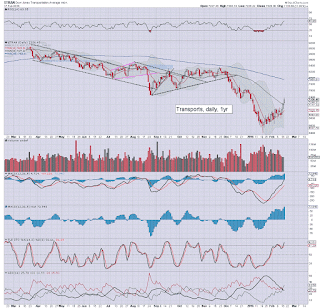 A third day for the equity bulls, with the 'old leader' Trans, leading the way higher. Indeed, the Trans is now set for a fifth consecutive net weekly gain.

Broadly though, this is almost certainly just a powerful bear market rally.

Unless the sp'500 breaks >1970 (2K to be decisive), I have no inclination to change the broader bearish outlook.