VIX - holding firm into next week

Despite the market rallying 1.7% (sp'index) this week, the VIX has held up very well. Perhaps the VIX holding over 21 (prior resistance, now seemingly support) is a clue that the market is yet to suffer a further (fifth wave?) lower next week. 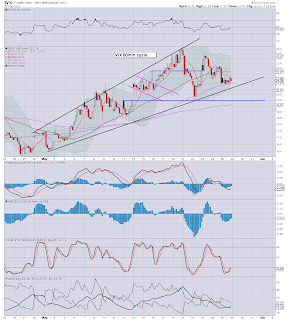 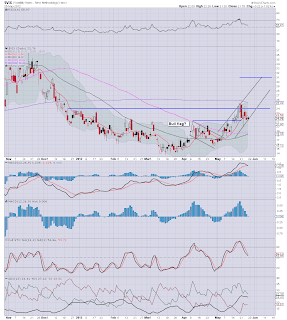 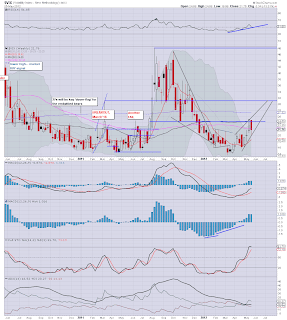 VIX upper target for next week is 27-29, as based on both the 60min and daily charts. The weekly cycle would offer a brief spike to 31 - match the 2011 quake-market low.

From a MACD cycle perspective, the VIX is a little high, so any move into the upper 20s is probably a market floor -at least into the mid June period.

If that's the case, the time to pick up some VIX calls would be in about 2-3 weeks.

Closing Brief - a few bearish hints for next Tuesday

Well, we saw the moderate latter day sell off that I was looking for. Even the VIX closed marginally higher, and a close above (what used to be resistance) @ 21% - so that's one bearish aspect to hold across into next week. Lets look at how those hourly cycles closed the week... 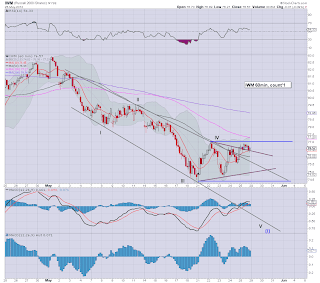 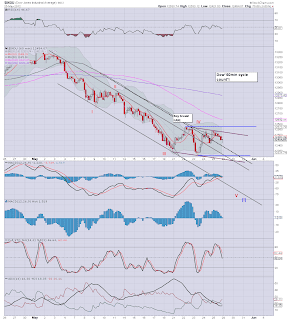 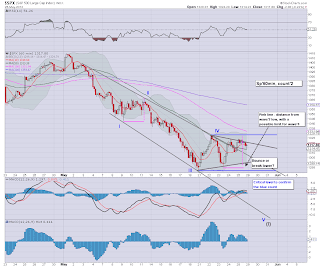 The Sp' closed the week up 1.7% or so, not entirely the most bullish of bounces. Neither of the above 3 indexes closed this week particularly bullish. Sure we saw a reasonably strong Monday gap up, and there was some follow through on Tuesday morning, but it soon failed, and we had that Wednesday move lower. As it is, we're now stuck in a narrow range, with the cycle suggesting a wave lower at the Tuesday open.

The bull maniacs will merely have to somehow claw above 1330 early next week, and that sets up an initial move to 1370/80.

Posted by Trading Sunset at 21:10:00
Email ThisBlogThis!Share to TwitterShare to FacebookShare to Pinterest

Hmm, the market is showing moderate - but increasing weakness (more so on the Dow/Transports), although VIX remains largely unchanged. The obvious key levels to break remain 1300 on the downside..and 1330 on the upside. Considering the bulls have had almost the entire week to do this...they have clearly failed.

We are due to go negative cycle on the MACD either this closing hour..or at the Tuesday open. 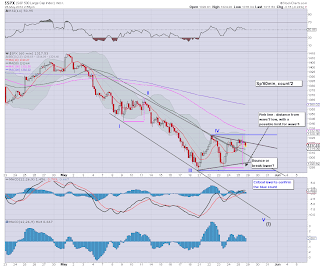 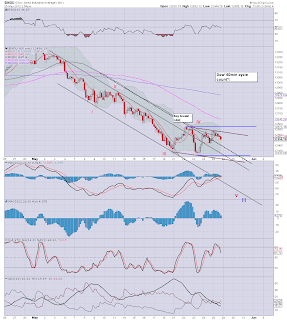 More after the close
Posted by Trading Sunset at 19:57:00
Email ThisBlogThis!Share to TwitterShare to FacebookShare to Pinterest

Whilst the market remains stuck at sp'1320..for what is starting to feel like months, I'm already looking ahead to next week...and even further out. 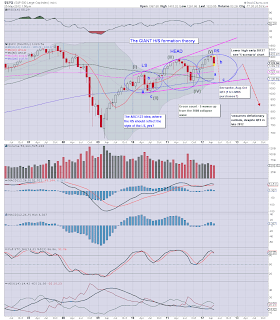 I'm still inclined to this outlook, which is something a few out there are also looking at - although they are not assuming some of the sub-issues that I am.

The main sub-issue being that if this is a RS, then why would it not act in the same style as a LS would? Why not? Hey, I'm no Elliot maniac/disciple, and I sure don't intend to read any of those E-books, but its been working out so far. We have a clear rollover on the monthly, this market IS headed down.

This outlook would assume a further move lower next week (see daily chart in previous posting), and then a 2-3 week bounce - concluding no later than mid-June. Then a final move down to that really important ascending channel/wedge line of sp'1100. I suppose we don't have to get that low, but that would be the 'natural' target.....at which point the Bernanke appears.
-- 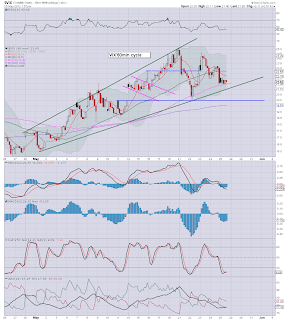 Certainly, the price action for the VIX is not bullish right now, but the cycle is pretty much exhausted to the downside. Considering its a Friday, I think the VIX is holding up very well. Its still possible we have a moderately higher VIX close, anything above the 10MA, around 22.25 would make for a reasonable close for those holding short across the long weekend.

Posted by Trading Sunset at 19:00:00
Email ThisBlogThis!Share to TwitterShare to FacebookShare to Pinterest

Mr Market remains stuck, at sp'1320. Dow, and Transports slightly weaker though today. VIX still holding up okay, considering its a sleepy Friday - when 'they' would tend to erode it 3/5% lower. 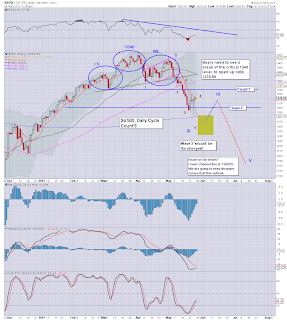 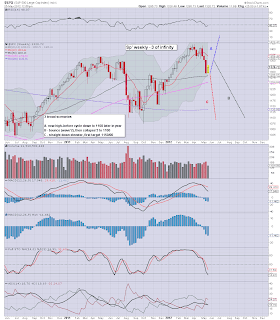 I quite like the Bearish daily chart listed above. If it is a bear flag on the daily cycle, then it should break lower next Tue/Wed' at the latest, with a move down to a 1280/60.

Considering the very bullish opening day and a half this week, the weekly chart does not look so bullish right now.

More later....
Posted by Trading Sunset at 17:59:00
Email ThisBlogThis!Share to TwitterShare to FacebookShare to Pinterest

Nothing much to add...we are stuck, with those algo-bots clearly waiting to go home to their vacation server-homes. 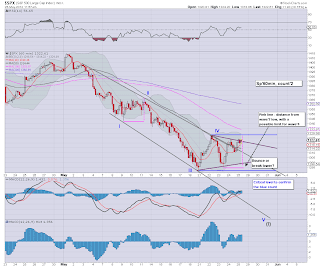 Still looking for some moderate weakness into the close.
--

*Amusing to see FB having a second successful Friday.... 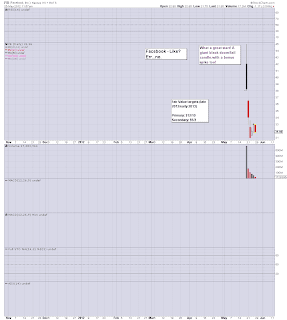 If the market does slip away next week, I'd look for FB to quickly drop to around $25, at which point the maniacs will likely start touting it as a 'bargain'.


Posted by Trading Sunset at 16:59:00
Email ThisBlogThis!Share to TwitterShare to FacebookShare to Pinterest 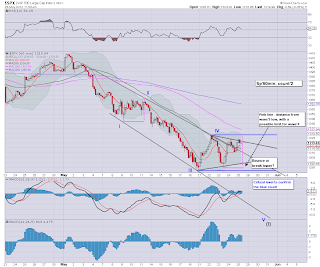 Considering the cycle, I'm looking for some moderate weakness later in the day, with at least a flat VIX.
Posted by Trading Sunset at 16:00:00
Email ThisBlogThis!Share to TwitterShare to FacebookShare to Pinterest

Market still yet to break above the important 1330 level. Interestingly, VIX is holding up very well so far today -even after the good survey data...

*Consumer Sentiment data: 79.3 vs 77.8 expected, highest reading since October 2007. Yep, we're back to those 'happy days' again. Maybe its time to start flipping houses once a month? 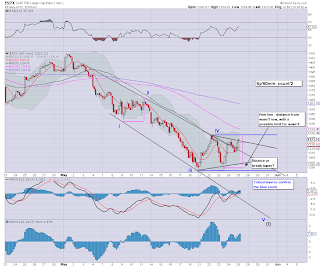 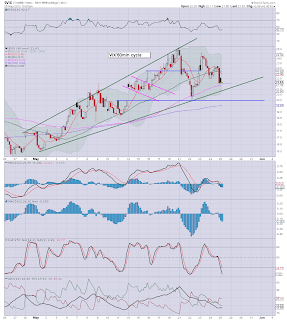 There again seems to be a growing consensus out there that we are still in a wave'4, with a 5' still to come. I suppose if that is the case, a 'capitulation day', next Friday, at the next big jobs report release?

Now, wave'2 (if that's what it was) lasted 3.5 days before the market slipped away on Friday May'11. Currently, we're 4 days into this sideways move...or just 2 - if you are look at the Dow (which was the one index that made a new low on Wednesday morning).
--

I'm inclined to believe we will still slip at least little lower next week, before a larger wave'2 UP.

More across the day..

Posted by Trading Sunset at 15:01:00
Email ThisBlogThis!Share to TwitterShare to FacebookShare to Pinterest

Good morning! Overnight Futures have been moderately choppy, we've swung from -0.4% to +0.4%, now we're about flat. European markets are mixed.

The only econ-data today is Consumer Sentiment at 9.55am. Market is expecting 77.8 - another post 2008 high. Clearly, everything is okay! 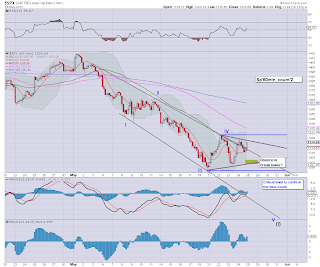 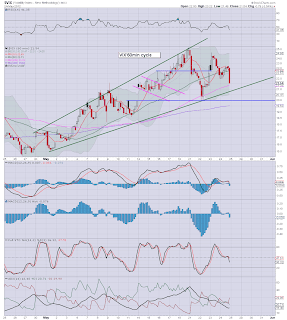 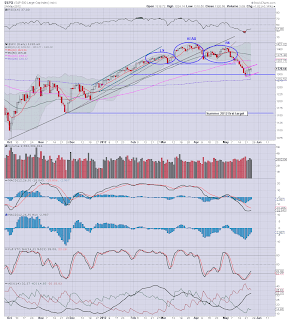 
As I noted in the daily cycle update last evening, we do have bear flags on all the index charts. It remains entirely possible we'll break below the recent 1292 low next week and at least move to 1280, maybe even as low as 1260/50. I certainly don't expect 1100s in this current cycle though.  On any basis, we're highly likely to bounce
-

The hourly cycle remains a mess, yesterdays last hour mini ramp really ruined what was turning out to be a reasonably bearish rollover. One thing to watch for this morning is the VIX. A break under 20 would be pretty bullish, and suggest sp'1330 is viable for todays close.

*Its a Friday that is leading into a 3 day holiday weekend, so I'm really not expecting too much action today. For most, probably better to just turn the screen off! Unless we get some news/rumour this morning, today will be a quiet one.

Good wishes for the extended weekend !
Posted by Trading Sunset at 13:16:00
Email ThisBlogThis!Share to TwitterShare to FacebookShare to Pinterest

It has been a real choppy few days trading. Friday will more likely than not be relatively quiet, as we move into a 3 day holiday weekend for US markets. The weekly cycle remains at a tricky place to ascertain what happens next week. 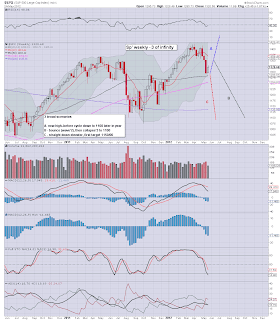 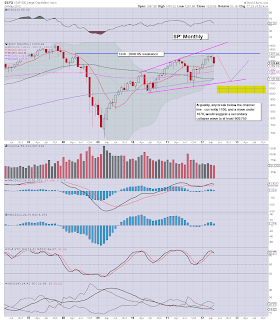 Clearly, at the moment, either of the three basic scenario outlooks could yet occur. Might the bulls get a low volume ramp on Friday to 1335/40 ? That would probably be enough to start off a few further weeks of upside. Yet there are bear flags on all the daily index cycles, that certainly adds some interesting bearish possibilities for next week.

When you consider the monthly chart, the overall trend is clearly down. We have already seen a good rollover top occur, and both June and July should produce further large declines.  As noted over the last few weeks, if the 'Giant H/S' theory is correct, the move down to sp'1100 should be done within a 3 month decline - just like the LS in 2010.

Goodnight !
Posted by Trading Sunset at 03:00:00
Email ThisBlogThis!Share to TwitterShare to FacebookShare to Pinterest

The market rallied into the close, but the broad sp'500 index still closed under the 10MA.There are now very apparent bear flags on almost every daily cycle index chart out there. If the bulls don't break significantly higher early next week, this market is going to have another down wave - the minute 5 of 5, that many seem to have now written off. 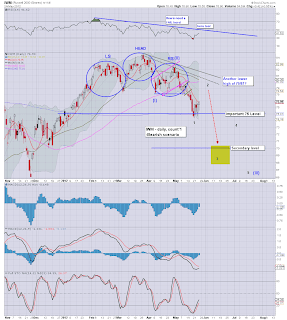 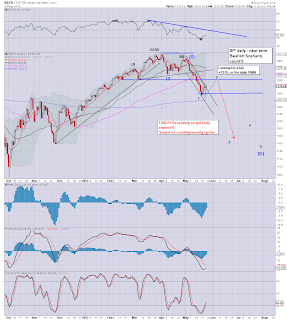 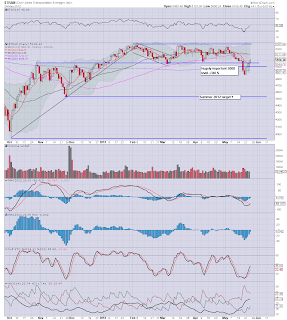 Lets start with the Transports, which has had a consistent four day up cycle already (again, the old leader, leading!). Yet, at this rate, the Tranny will be breaking new highs in just 5 days. I can't see new highs as viable after just recently breaking the hugely important 5000 level. No way!  The tranny is certainly going to be closely monitored next week.

The Sp' closed again under the 10MA, but we are now outside of the daily cycle down channel, which lasted an astounding sixteen days! On balance, we're more likely to go up for a wave'2 to at least 1370/80, but they ARE bear flags on the daily chart. The stop levels are very clear, so the big/smarter players will be fine regardless.

The overall bearish cycle outlooks still appear on track - especially when taken with the bigger weekly and monthly cycles. The primary target for the summer remains sp'1100, at which point the Bernanke will likely be ready to appear.
Posted by Trading Sunset at 00:00:00
Email ThisBlogThis!Share to TwitterShare to FacebookShare to Pinterest
Newer Posts Older Posts Home
Subscribe to: Posts (Atom)