France is also starting to Implode

The French CAC index is also now following the lead of Spain and Italy. 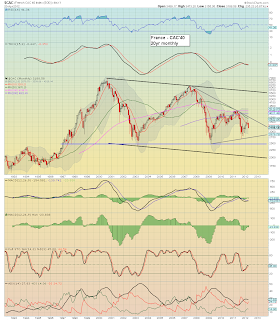 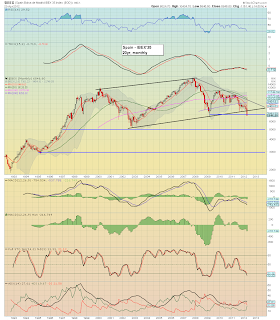 *the spike on the latest IBEX index monthly candle is a stockcharts error.
--

Spanish IBEX lost another 200pts today...that leaves just another 1800 pts to go until the next major level of 5000.


Posted by Trading Sunset at 22:30:00
Email ThisBlogThis!Share to TwitterShare to FacebookShare to Pinterest

A close well above the earlier lows, but we closed within a very clear bear flag on the hourly index cycles. Tuesday could easily open moderately up, but it sure won't stay green for long. Selling any and all mini rallies remains the current plan. 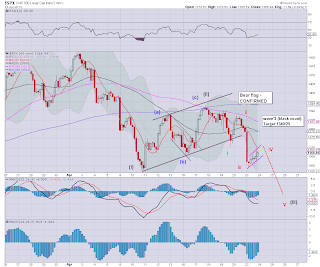 The 10MA at 1368 remains primary resistance, a minor break above that early Tuesday is acceptable...but NOT a close above it. Primary target remains 1340, secondary levels remain 1325 and 1300. A move under 1300 presently looks unlikely in the near term. I find it interesting that the VIX did hold above the important 10MA today - despite the indexes recovering. The bears would preferably see a further VIX gap up tomorrow morning - although its not absolutely necessary. Primary target remains a break of the recent 21 high, then a fast move to 24.

More a little later, - where I will be looking at a few of the near term possible scenarios/counts.
Posted by Trading Sunset at 21:08:00
Email ThisBlogThis!Share to TwitterShare to FacebookShare to Pinterest

A few afternoon bargain hunters entered just earlier, causing a mini ramp, but it remains well within the bear flag zone, and under the important 10MA. The near term outlook remains bearish. 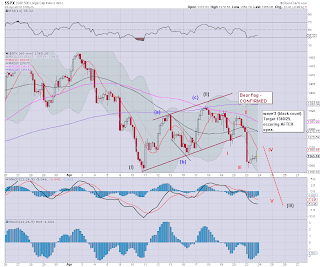 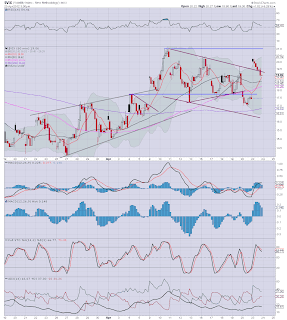 Whether we sell off in the closing hour really isn't that important, it would merely be a bonus for the bears. The bigger issue - confirming the bear flag on the daily cycle, has already been successfully achieved. Bears should be more than satisfied with today.

A brief summary to come after the close.
Posted by Trading Sunset at 20:01:00
Email ThisBlogThis!Share to TwitterShare to FacebookShare to Pinterest

Prices are actually a little weaker than I had expected. The bounce so far is a mere 7 sp' points from the 1358 low. Its possible the little bear flag will keep growing sideways all the way into the close, but considering everything, I'm looking for a closing hour sell-off, new lows would be well within range. 
2 rainbow (Elder impulse) charts, to clarify the near term trends 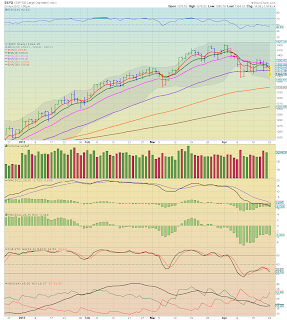 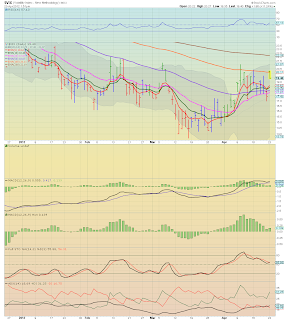 Anyone still want to be long after seeing those 2 charts?

I am most certainly looking forward to the closing hour, and indeed the rest of this week!
Posted by Trading Sunset at 19:01:00
Email ThisBlogThis!Share to TwitterShare to FacebookShare to Pinterest

The 60 minute cycle right now remains bearish, but was this morning merely the base of wave'1 or 3, or something else? 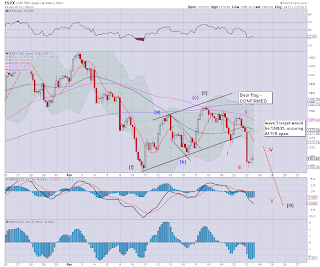 *primary resistance for any bounce remains the 10MA, now down to 1372

I will probably post a few alternative 60min' counts after the close. Right now there is no hurry, or need to know what the count might be. The daily cycle projects at least 1340, so that's the key issue I am keeping in mind.


Looking ahead to the close

If market can't rally any higher than 1366, this really is a weak market, and we are sure to close significantly lower than the morning low of 1358.

The doomer bears who are looking for anything from 1325 to a 'flash crash' (yeah, there are always some touting that), for such lower targets to be achieved, we need more than just a dow -150 day. We would arguably need to see dow close -225/275 at least.
-

VIX looks like it has stabilised in the low 19s. a close in the 20s would be great, 21+ would be a VERY serious warning that something explosive could occur in the next few days.

More to come..as always!
Posted by Trading Sunset at 18:01:00
Email ThisBlogThis!Share to TwitterShare to FacebookShare to Pinterest

As also expected, we've likely floored for a few hours, the 15 and 60 minute cycles will reset to some extent. Most important, look for a fail at the 10MA on the 60min cycle. That won't likely happen until near the close, or more likely early Tuesday. Regardless of any intra-day noise, there are likely to be some considerable declines yet to come. 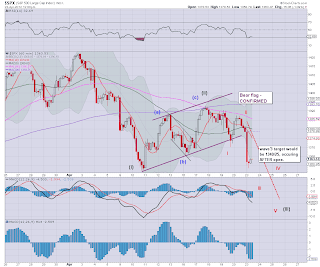 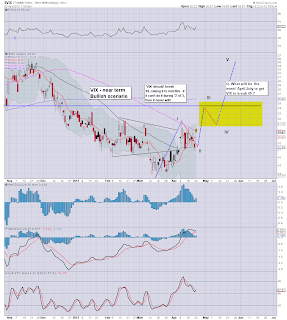 *normally I would be a little concerned about a black candle on the VIX, but considering the overall situation, it should be fine. A close over 19 (20 would be much better!) will be important though.

It is looking very good overall for those holding short positions. So long as the bounce does not break/hold over the 10MA on the 60min charts, everything remains bearish.  Sp'1340 appears a given, as does VIX'24

More later...stayed tuned!
Posted by Trading Sunset at 17:01:00
Email ThisBlogThis!Share to TwitterShare to FacebookShare to Pinterest

11am update - they bought the dip, and got the kick

I have to say, it was very amusing to see the maniacs buying the gap lower, only to get kicked en-masse at 10am. Clearly, all of those were amateurs, who have no concern about the state of the daily cycles. Utter madness for them to buy the gap lower, immediately after the huge bear flag having been confirmed. 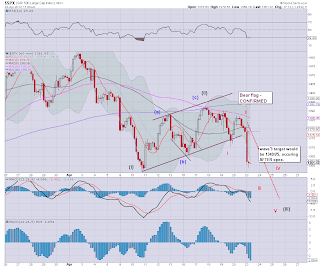 A little bounce is to be expected, by end-day, bears would prefer a close under the 10MA  -currently 1378, but falling rapidly. The daily cycle is now a very pleasing sight, we have the big bear flag confirmed, and first target remains an easy 1340/25. There is a lot of chatter about 'where will we floor?'.  As noted earlier, we'll probably know nearer the time.

Frankly, anyone taking on new long positions today is a crazy maniac.

yours...
in the bunker.
Posted by Trading Sunset at 16:01:00
Email ThisBlogThis!Share to TwitterShare to FacebookShare to Pinterest

10am update - everything as expected

The morning gap lower is a very good clarifying situation for the bears, the wave'2/bear flag IS confirmed. SP'1340 will surely be hit within the next few days. Whether we can hit 1325/00..we'll have a better idea once we are at 1340. So...lets take each day in this down cycle as it comes.

*the exciting thing from a doomster point of view is that both the weekly and monthly cycles are now seriously warning of major trouble on the 1-6 month time scale. 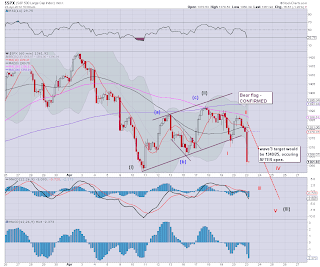 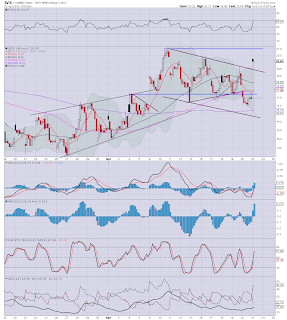 Clearly, we've already seen a bunch of maniacs chase the open and take on 'bargain' long positions...crazy! They will all get the kick (those that use stops at least) soon enough. It is especially both amusing and disturbing at the same time to see people chasing AAPL back up. Do they not look at the daily charts?

We are sure to get a little bounce at some point in the day, but main trend IS down.. so I hold short regardless of any intra-day noise.

Holding to all targets as stated over the weekend.

More throughout the day!
Posted by Trading Sunset at 15:01:00
Email ThisBlogThis!Share to TwitterShare to FacebookShare to Pinterest

Good morning! The daily cycle bear flag will be confirmed at the open with a gap lower of around 1.25% or so, that gets us to around sp'1365.

Everything is looking good for a bearish week ahead.

This remains the primary chart to keep in mind... 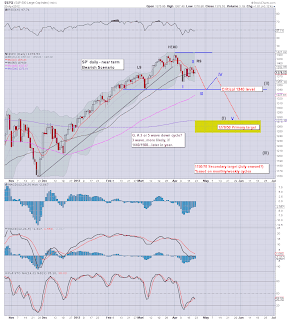 Doubtless, regardless of how low we fall this morning, we'll get a bounce/test of the 10MA later in the day, and then rollover again.

Those bulls who were going long on Friday are getting a chance to exit this morning for just a minor loss, if they hold, they could be panic selling by late Wednesday. From a bear's perspective, this could be a highly amusing week to watch and be part of ;)

Much more throughout the day!
Posted by Trading Sunset at 12:37:00
Email ThisBlogThis!Share to TwitterShare to FacebookShare to Pinterest
Newer Posts Older Posts Home
Subscribe to: Posts (Atom)