With the main indexes closing moderately lower, the VIX clawed a little higher, settling +2.3% @ 12.82. A small spike into the 14/15s seems possible if sp'1730s in the next few days. Certainly though, VIX looks unlikely to break 20 again until next year. 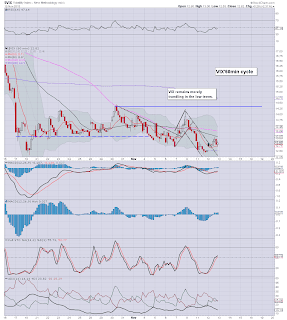 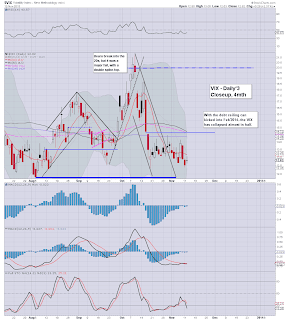 Suffice to say, VIX a little higher..with the market a little lower

Even VIX 15 looks difficult in the near term.

It would seem an absolute waste of time to be involved in either VXX, TVIX/UVXY, or any VIX calls for the remainder of this year.

Unless you're an option call writer that is...or can short the actual stock ETFs/ETNs.
--

The main indexes closed moderately lower, with the sp -4pts @ 1767. There appear to be an absence of buyers to lift the market >1775, and it would seem Mr Market wants to shakeout the weaker bulls. Near term downside to the 1730s..before another wave into the 1800s by early December. 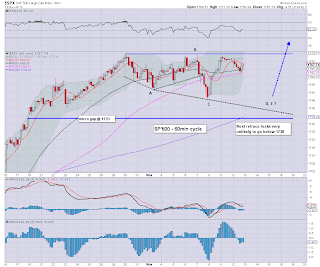 Compared to yesterday, today was massively volatile and truly exciting.

Seriously though, at least there was some action, particularly in the metals and Oil.

So..bears look set for another opportunity to knock the market about 2% lower, before the next wave higher.
-

the usual bits and pieces across the evening
Posted by Trading Sunset at 21:01:00
Email ThisBlogThis!Share to TwitterShare to FacebookShare to Pinterest

The main indexes are moderately lower, with the sp' hitting a low of 1762. The micro 5/15min cycles are offering a tiny bounce before the close, but we're still set to close slightly red. With seemingly no buyers >1775, market looks set for moderate weakness across the next few days. 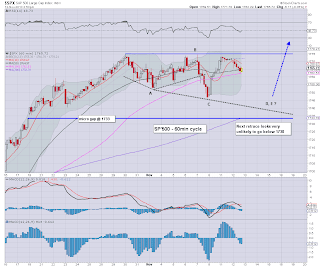 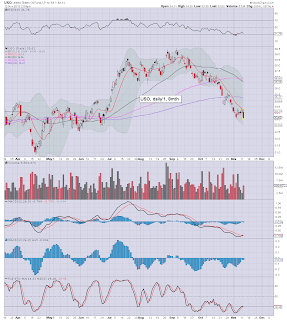 *Oil and the precious metals are both sharply lower, and for the deflationists out there..its kinda interesting day.

Like Silver, Gold has now taken out rising support. The June lows will not likely hold. 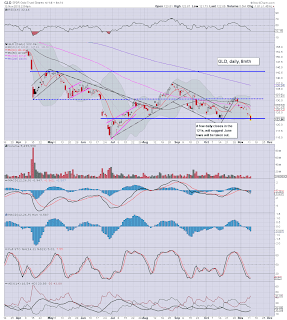 VIX remains in the 12s..which never fails to look bizarre.
-

As I noted yesterday...GDX looks vulnerable..and today -2%....the June lows will likely be taken out.
Posted by Trading Sunset at 20:01:00
Email ThisBlogThis!Share to TwitterShare to FacebookShare to Pinterest 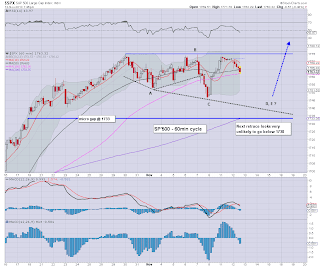 Today is indeed turning out pretty good..arguably for both sides.

Bears getting a little wave lower..and the bulls are going to get some good buying levels within the next few days.
-

The bigger weekly charts similarly offering the 1730s..where there is key 10MA support. 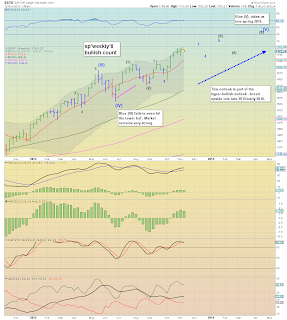 There is arguably a case for a fractal-analogy, and that would place us in mid-February.

Stay tuned!
Posted by Trading Sunset at 18:48:00
Email ThisBlogThis!Share to TwitterShare to FacebookShare to Pinterest

The market has been stuck just under the sp'1775 high for around two weeks. It would seem Mr Market wants another little shakeout before the next lunge higher..into the 1800s. Metals remain weak, with Gold -$7, and Silver -2.2%. Oil is naturally weak, -0.9% 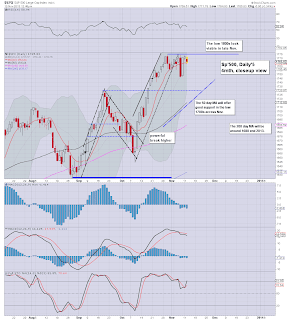 We have indexes that look tired, and from the price action, I think we have an increasingly good chance of pulling lower to the 1730s.

The only issue is what sort of buying interest will we get in the 1730s?
-

Frankly, I still can't see sub'1700s in the remainder of the year.

UAL..cooling off..as the weakness in the main market starts to cause problems. 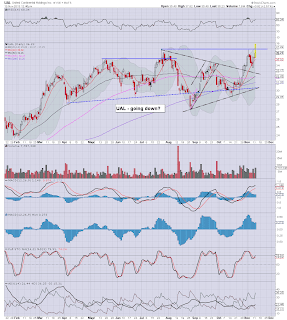 Regardless, the initial break is pretty important.
Posted by Trading Sunset at 17:49:00
Email ThisBlogThis!Share to TwitterShare to FacebookShare to Pinterest 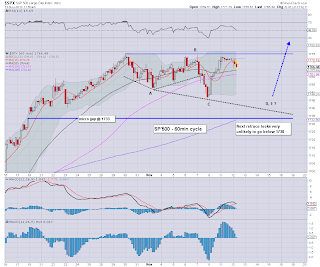 Ohh the humanity! The indexes are in the red.

Without getting lost in bearish hysteria, there remains moderate chance of the 1730s being hit..before the next wave into early December..where I continue to seek the sp'1800s.
-


Urghh..the VXX, almost as bad as the TVIX/UVXY - the latter pair of which are down around 50% in the past 4 weeks.


12.37pm.. market obviously unable to clear 1775..need another shake out first...probably in the low 1730s.
-
Posted by Trading Sunset at 16:51:00
Email ThisBlogThis!Share to TwitterShare to FacebookShare to Pinterest

11am update - UAL making a break for it

Whilst the main market sees continued chop, one notable mover is the airline stock United Continental (UAL), which is making an attempt to break the key recent high from late July in the 36s. A daily close in the 37s will open up much higher levels in the days and weeks ahead. 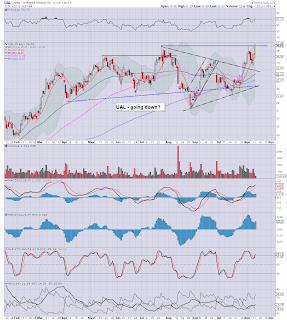 *whilst the main market is..dull..I'll largely continue to focus on individual stocks.
--

As for UAL, no doubt lower oil prices are going to really help Q4 earnings.
-

Meanwhile, metals remain weak, although nothing too dramatic yet.
-

Main market looks a touch weak...and the 1730s remain a valid target..not that I think its trade-able.
- 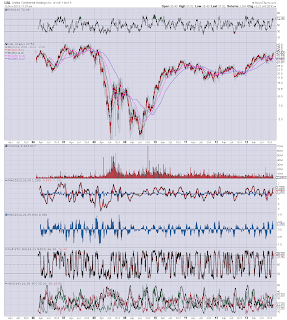 So....$10 upside..to go...by late spring 2014 ?   Probably.
Posted by Trading Sunset at 15:53:00
Email ThisBlogThis!Share to TwitterShare to FacebookShare to Pinterest

The sp' opened -5pts, but is already offering a pretty stern reversal to the upside. Underlying pressure remains to the upside, and the last 3 weeks have been arguably one giant bull flag, as seen on most indexes and stocks. Metals are weak, Gold -$4, Oil -0.4%. 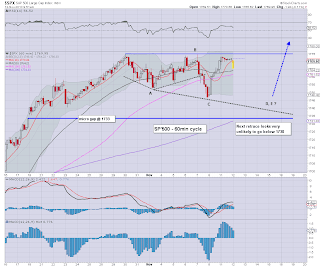 As ever, the market is showing the underlying strength, that will probably carry us through into spring 2014.
-
Notable strength in FB, and UAL 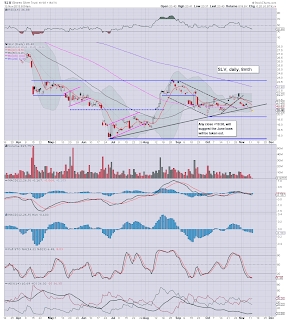 Silver has broken support, Gold...yet to follow.
Posted by Trading Sunset at 14:52:00
Email ThisBlogThis!Share to TwitterShare to FacebookShare to Pinterest 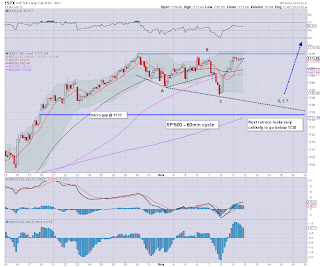 The near term outlook is difficult to guess. We could still fall to the low sp'1730s..but as many are increasingly suggesting, the more obvious trend remains to the upside.

The sp'1800s are clearly within range, we're only talking about less than 2%, and that is clearly viable across just a few days.
-

For many individual stocks out there, the last few weeks look like a giant bull flag has been formed.

*no real news due today, and neither is there any sig' QE-pomo...so the bears have that going for them.
Posted by Trading Sunset at 13:18:00
Email ThisBlogThis!Share to TwitterShare to FacebookShare to Pinterest

Bits and pieces to end a quiet day

A day of nothing for the US indexes. The bigger picture remains bullish, with broad upside into spring 2014. Equity bulls should be seeking a weekly close in the Dow 15800s. That should be enough to confirm 16k in early December, and then 17k in late spring. 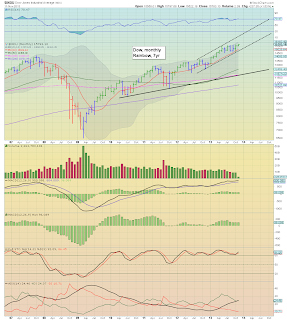 On a quiet day..lets take a look at a few miscellaneous bits and pieces... 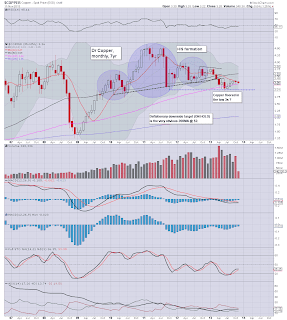 Certainly..Copper seems stuck at the monthly 10MA. The big $3 threshold remains key. If that breaks, it bodes badly for the precious metals and mining stocks. 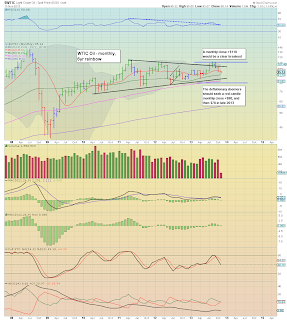 Like the broader commodity index, Oil is weak. Many out there now seem open to Oil back in the mid 80s. A break below the June 2012 low of $77 seems very unlikely though. 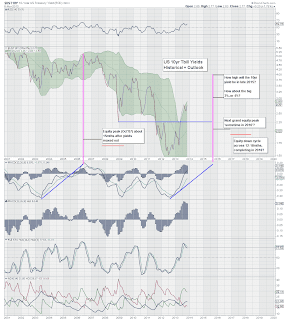 A simple extrapolation of the previous multi-year cycle (interestingly) gives a target date of late 2015. I'd have to guess 10yr yields will rise to the 4s..perhaps 5s, before the next big turn. 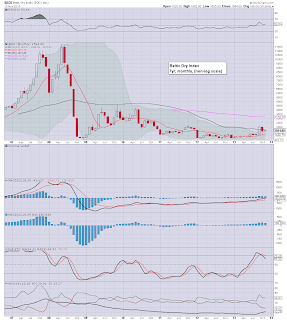 There really isn't anything significant due tomorrow. The only aspect to be mindful of are a few Fed officials. Any comments from the printing maniacs might be enough to kick the market lower, not least if one of them dares mention the T word.

*the next sig' QE-pomo is not until Thursday.
--

My downside target for the last two weeks has been the sp'1730s, and I still think there is a chance of that being hit. We're only talking about a brief 2% drop across 2-3 days, before the dip buyers would pile in again. I certainly don't think the downside is trade-able though.

I remain largely on the sidelines, with zero intention of shorting the indexes for some months. It was a quiet day indeed, tomorrow can only be more lively..yes?