Despite equity indexes closing moderately higher, the VIX managed to remain net higher, settling +2.8% @ 12.73 (intra high 13.22). Near term outlook is for continued equity upside to the sp'2170s... which should equate to VIX remaining stuck within the 15/11 zone in mid June. 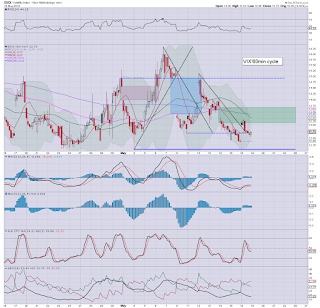 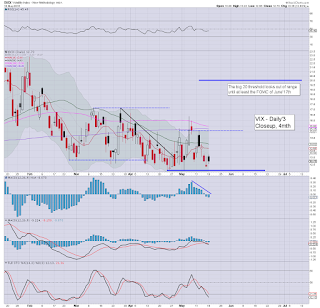 VIX looks set to remain subdued until the next FOMC of June 17th. Even then, the big 20 threshold looks unlikely to be broken/held above for more than a few days.. if not hours.
--

US equity indexes closed moderately higher for the third consecutive day, sp +6pts @ 2129 (intra high 2131). The two leaders - Trans/R2K, settled higher by 0.7% and 1.1% respectively. Near term outlook is for broader upside to the sp'2170s by the FOMC of mid June. 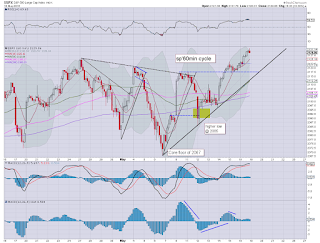 *closing hour was micro chop...  nothing of significance
--

The week starts pretty muted, but still, the market manages another pair of new historic highs in the headline indexes of the Dow and sp'500.

*the usual bits and pieces across the evening...
Posted by Trading Sunset at 21:01:00
Email ThisBlogThis!Share to TwitterShare to FacebookShare to Pinterest

US equity indexes look set to close higher for the third consecutive day.. with Dow 18300s and sp'2130s. USD is continuing to build sig' gains of 1.2% in the DXY 94.20s. Metals are under pressure from the rising USD - but holding up relatively well, Gold -$1. 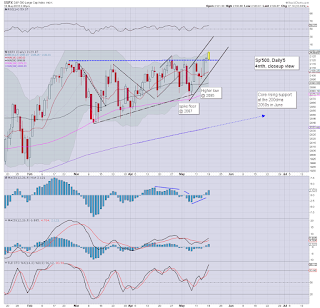 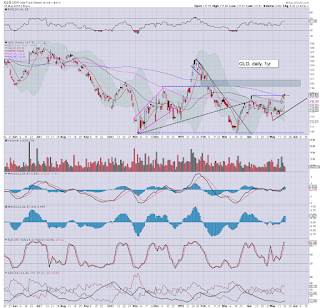 *Gold was set for a fifth consecutive net daily gain..  but is clearly under some distinct pressure as the USD just keeps on climbing today.
--

Without question.. a day for the bulls, with notable new highs in the Dow and sp'500.

Yes the Trans is badly lagging, but with the Nasdaq comp' just 1% from breaking the tech' bubble high... this remains no market for anyone to attempting to short.
-

strength: AAPL +1.4%... as the mainstream start pondering about what $240 might imply for the main market.
-

2pm update - even the Transports are higher 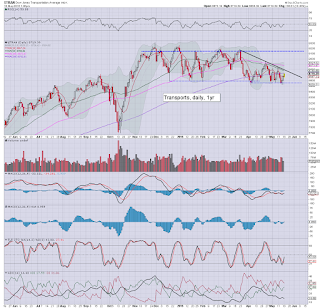 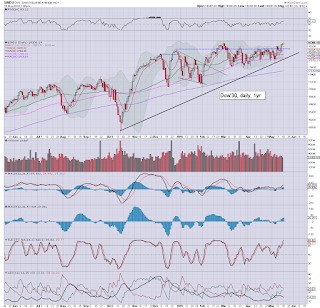 *Trans is still seriously lagging though, despite Oil only in the low $60s.
-

From there... its merely a case of scrap along the upper bol' bands.. or get stuck.. and reverse lower into late summer/early autumn.

For now... there is no reason for bears to get involved.
-

notable weakness: coal miners, BTU -8.3%... close to breaking the historic low of July 2002 ($3.68).
Posted by Trading Sunset at 18:54:00
Email ThisBlogThis!Share to TwitterShare to FacebookShare to Pinterest

US equity indexes are holding moderate gains, and it remains the case that the bears are still on the run, since the current hyper-wave that began at sp'1074 in Oct'2011. USD is battling to break/hold the DXY 94s, +0.9%. Metals are strong (relative to USD gains), Gold +$2, with Silver +1.0% 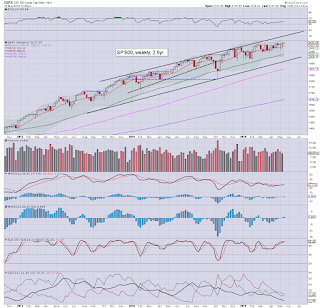 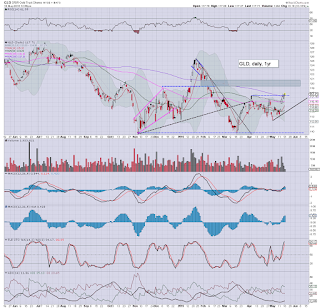 *note the upper bollinger.. now in the 2150s. By the next FOMC, we could be in the 2170s, which would interestingly also be a tag of the upper bol' on the giant monthly cycle.
--

Anyone still doubtful about broad upside into mid June?

Greece remains a wild card, but then.. that has been the case for a full FIVE years. Clearly, some are picking up mini-crash protection via VIX calls, but overall... with new highs today.... bears got nothing to tout.
--

As for the bears... I think the following sums up the current situation...

-
back at 2pm
Posted by Trading Sunset at 17:58:00
Email ThisBlogThis!Share to TwitterShare to FacebookShare to Pinterest

The Dow and sp'500 break marginal new historic highs, as a short-stop cascade appears underway. Equity bears are being slowly ground out of the market, and that looks set to continue into the next FOMC of June 17'th. USD is holding gains of 0.8% in the DXY 93.90s. 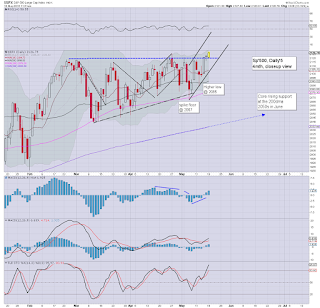 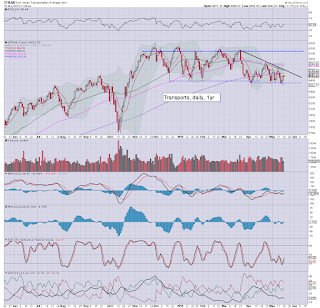 *Trans remains very weak, but still looks set to at least make an attempt at the 8800s later this week.
--

There remains little reason that the equity bears have any hope until mid June. Even then.. the first move lower (whether late June.. or July/August).. won't likely be much.

For now.. this remains no market for bears... aside from a few rare exceptions like the following...

Whilst the broader equity market is in micro chop mode (with a fractional new historic Dow high), there is notable strength in the USD, +0.8% in the DXY 93.90s. A 1-2 week bounce into the 95/96s remains very viable before a final washout to 90/89. 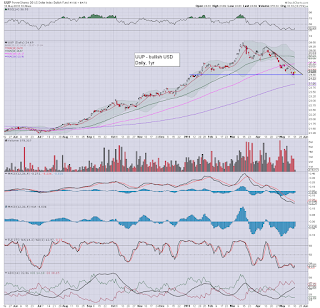 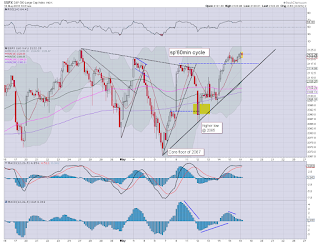 Sure is a pretty dull start to the week in equities.

Underlying MACD (blue bar histogram) hourly cycle is set for a bearish cross, but there just doesn't seem any downside power right now. More likely, its just a case of churning sideways before the next up wave.

The fact we've already seen a new high in the Dow bodes in favour of the bulls.

*I'm aware some are seeking the sp'2040s within the next few weeks, but that simple doesn't look viable. Bears saw a sig' wave lower last week to 2085.. and we saw what happened from there.

-
notable strength: DISCA +2.1%.. although broader trend sure isn't so pretty.

weakness, BABA -2.0%... no one seems interested in picking that up today.

Icahn has been talking... 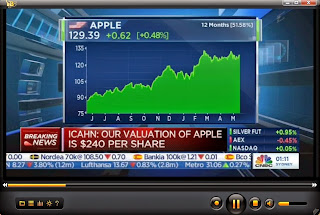 $240... and it remains a valid target.. relative to the broader market.

Or perhaps you'd like a neg' yield EU bond?
-

10am update - the chop continues

The market has started the week in the same manner as it closed Friday... minor chop. Market appears set to drift across today. With the USD building early gains of 0.8% in the DXY 93.90s, the precious metals are reversing lower, Gold -$2. 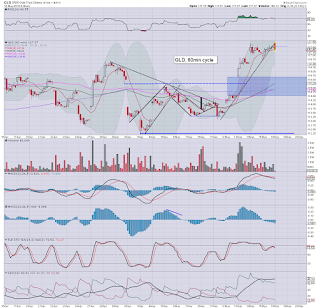 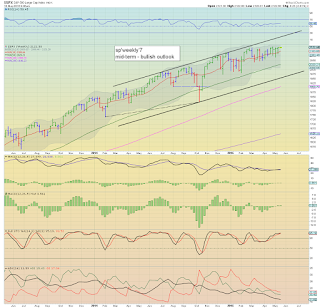 *new historic highs in the Dow/Sp'500 are clearly viable this morning, and it'd certainly give some justification to those seeking further upside into next month.

R2K is battling a little higher, but the Trans remains a major problem.. and is arguably a pre-cursor warning of 'summer trouble'.
--

Gold/Silver opened with a black-fail candle on the smaller 5/15min cycles. I have to say though, considering the USD, the metals are holding up strongly.

As for equities, note the upper bollinger on the weekly cycle.. now in the 2150s.. even a little earlier than I had expected.

There remains HIGH threat of sp'2170s by the FOMC of June 17th. That would make for a far better index-short opportunity.
-

early weakness, BABA -1.6%.. as it seems they are in trouble for selling (indirectly) counterfeit goods.
-

US bonds are slipping, TLT -1.2%...  bonds will be something to be increasingly mindful of in the months ahead.
Posted by Trading Sunset at 14:52:00
Email ThisBlogThis!Share to TwitterShare to FacebookShare to Pinterest 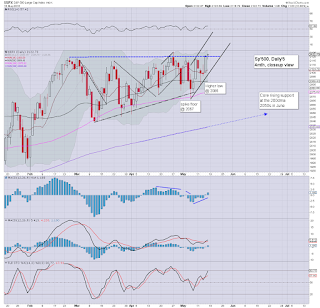 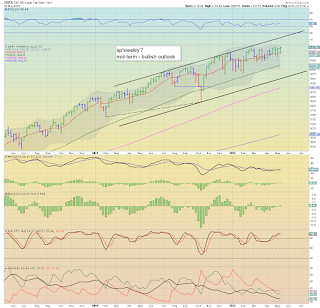 Another week.... moving into the latter half of May..

This week I will be keeping a close eye on the USD and bonds. Both were offering initial signs of a turn last Thurs/Friday. A net weekly gain in the USD would surely at least stall recent strength in the precious metals.
--

*the weekly chart might see the upper bol' get close to the 2150s today. Even more important, by the next FOMC of June 17th, both weekly and monthly cycles will offer the 2170s.

I would at least consider an index short at such a level, but for now... there is no hurry. nor at these price levels.

Good wishes for the week ahead
Posted by Trading Sunset at 13:23:00
Email ThisBlogThis!Share to TwitterShare to FacebookShare to Pinterest
Newer Posts Older Posts Home
Subscribe to: Posts (Atom)