Despite some rather significant declines in the R2K - and moderate declines in other indexes, the VIX was very muted for much of the day, settling with minor gains of 4.2% @ 14.80. Near term outlook remains for the VIX to stay within the 15/12 zone. 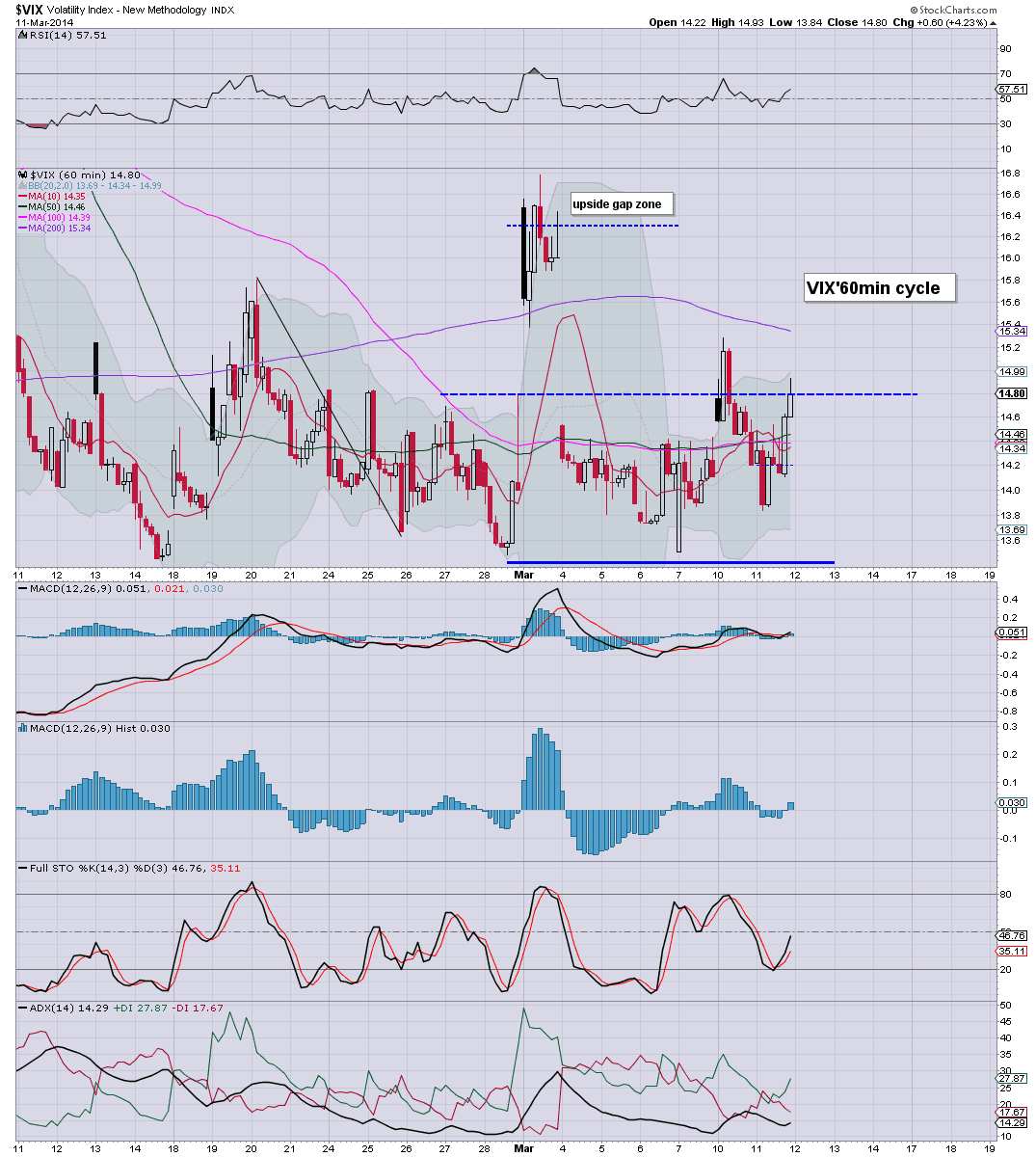 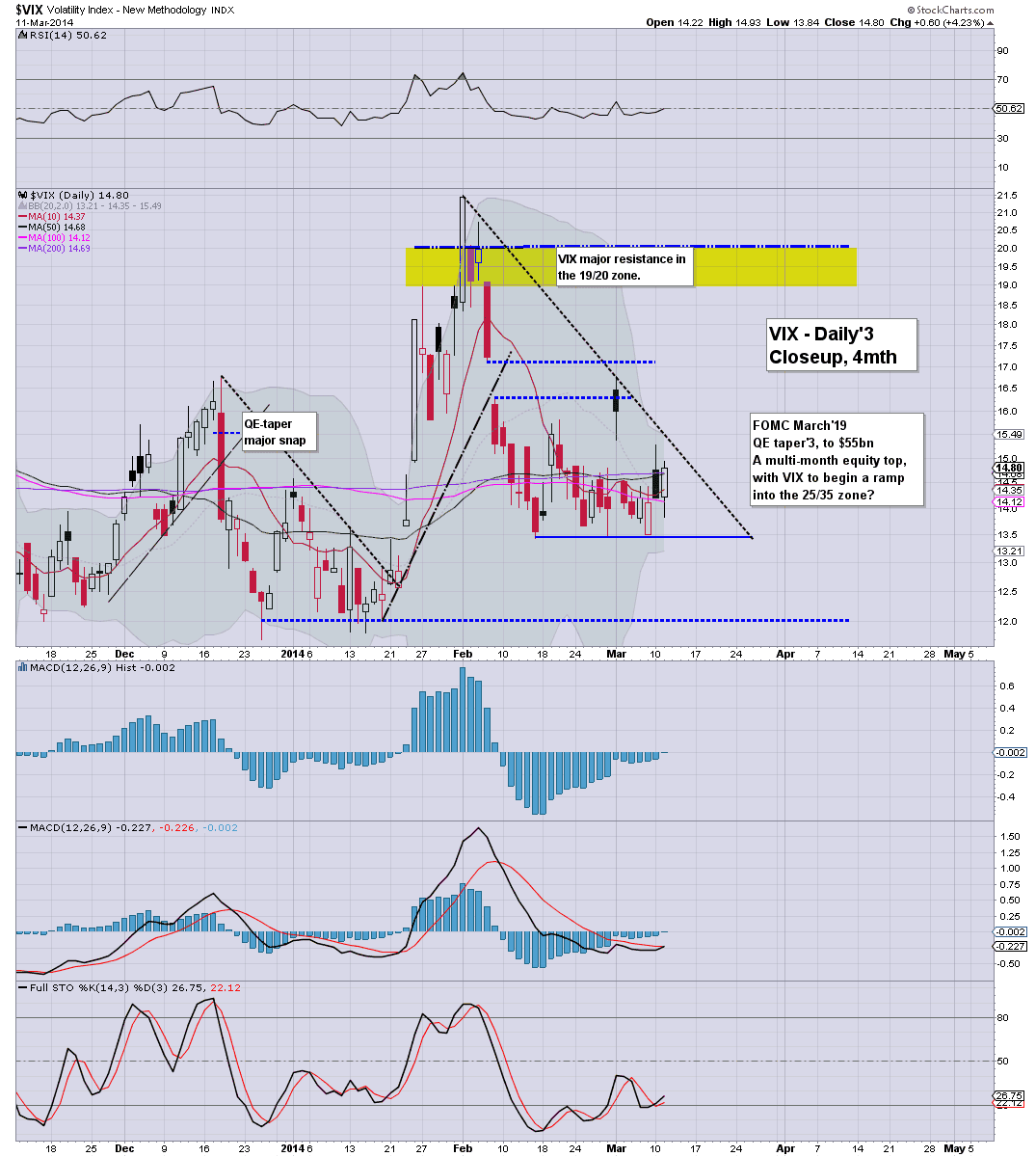 So..weak indexes, and a VIX that closed a little higher, but really, this is nothing for the equity bears to get overly excited about. It is the same price action that we've seen for the past month, and barring a move <sp'1834, the primary trend is most certainly still to the upside.

VIX looks set to remain under the key 20 threshold until at least April.
--

US indexes closed moderately lower, with the sp -9pts @ 1867. The two leaders - Trans/R2K, saw more significant declines, slipping -0.3% and -1.1% respectively. Near term outlook remains broadly bullish into the next FOMC of March'19. 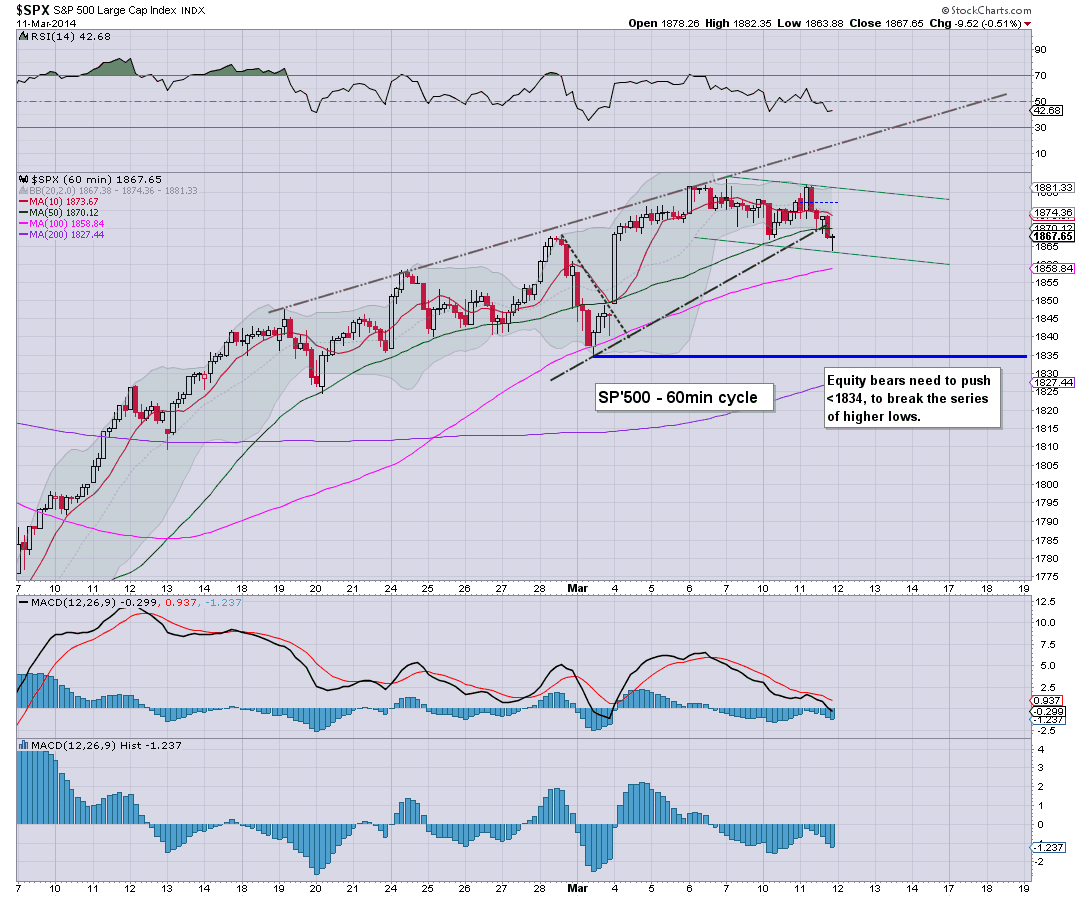 *some mixed chop in the closing hour..and it was nothing particularly bearish
--

So...a somewhat weak afternoon, and the declines in the two leading indexes is a 'mild' concern. Far more significant though is the ongoing weakness in Copper..but more on that later.

I'm still expecting new index highs into next week.
-
more later..on the VIX
Posted by Trading Sunset at 20:02:00
Email ThisBlogThis!Share to TwitterShare to FacebookShare to Pinterest

US equity indexes are lower, but in the scheme of things, the declines are still only moderate, and the VIX sure isn't showing any real kick to the upside. Metals are trying to build gains, Gold +$8, although Copper looks set for a daily close <$3. 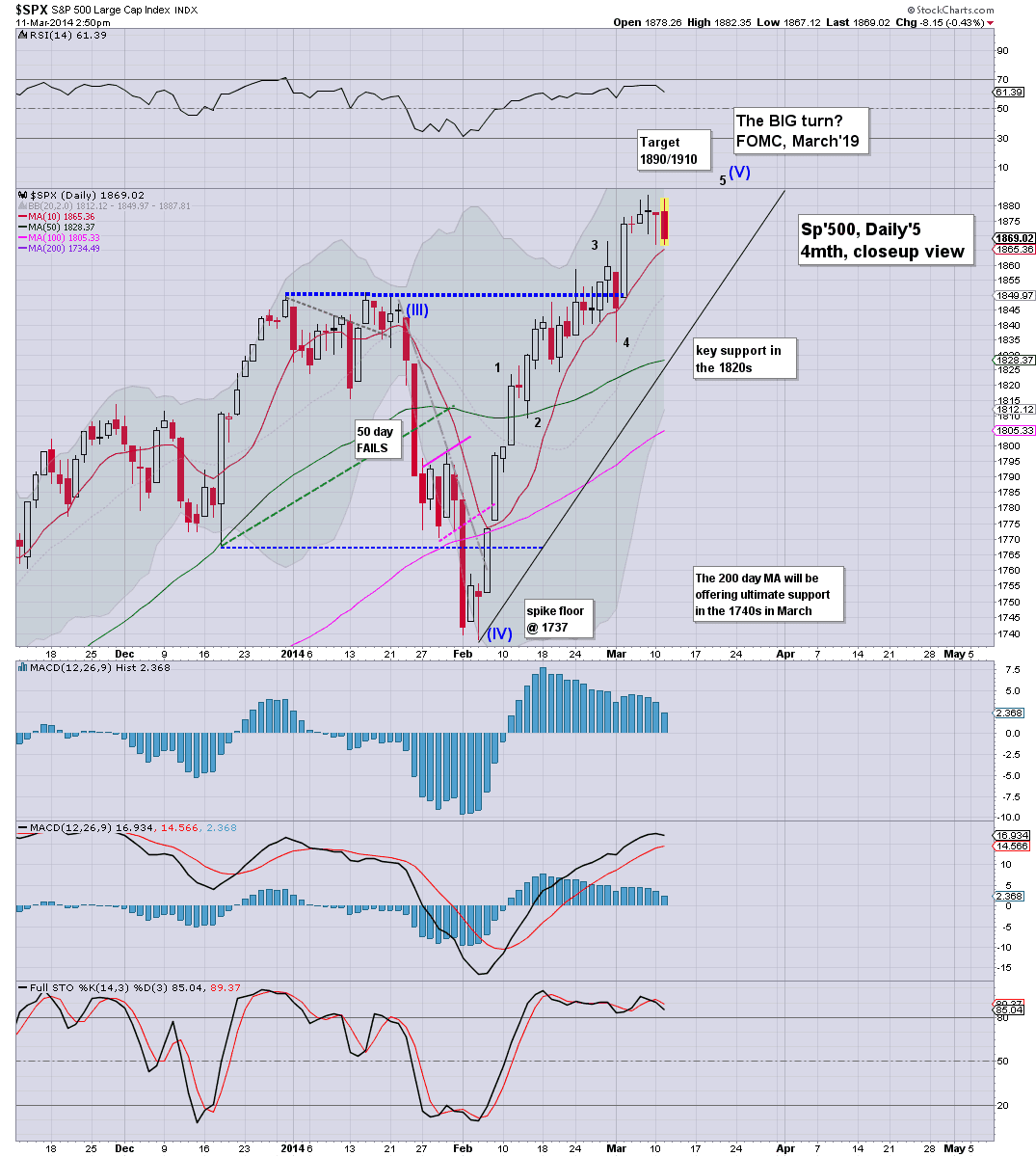 Action in the indexes is a touch interesting...but really....

The real action is in the hysteria that is PLUG

Clown finance TV has just brought on some guest who is claiming 'fair value' 50 cents, bring up such obvious issues as 'it doesn't make any money'. 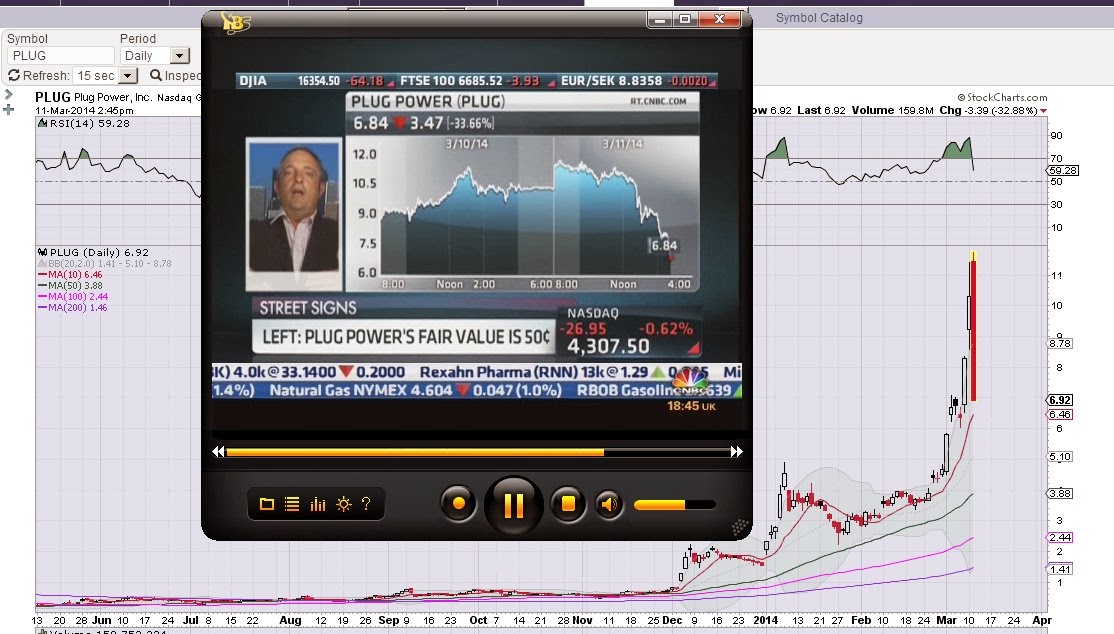 The black-fail candle in the morning on the daily was a warning of trouble..and we are now seeing herd bail...but the exit door is too small.  We've seen two very rare..intraday gap downs.

There can be no excuse for anyone being surprised by this implosion.
- 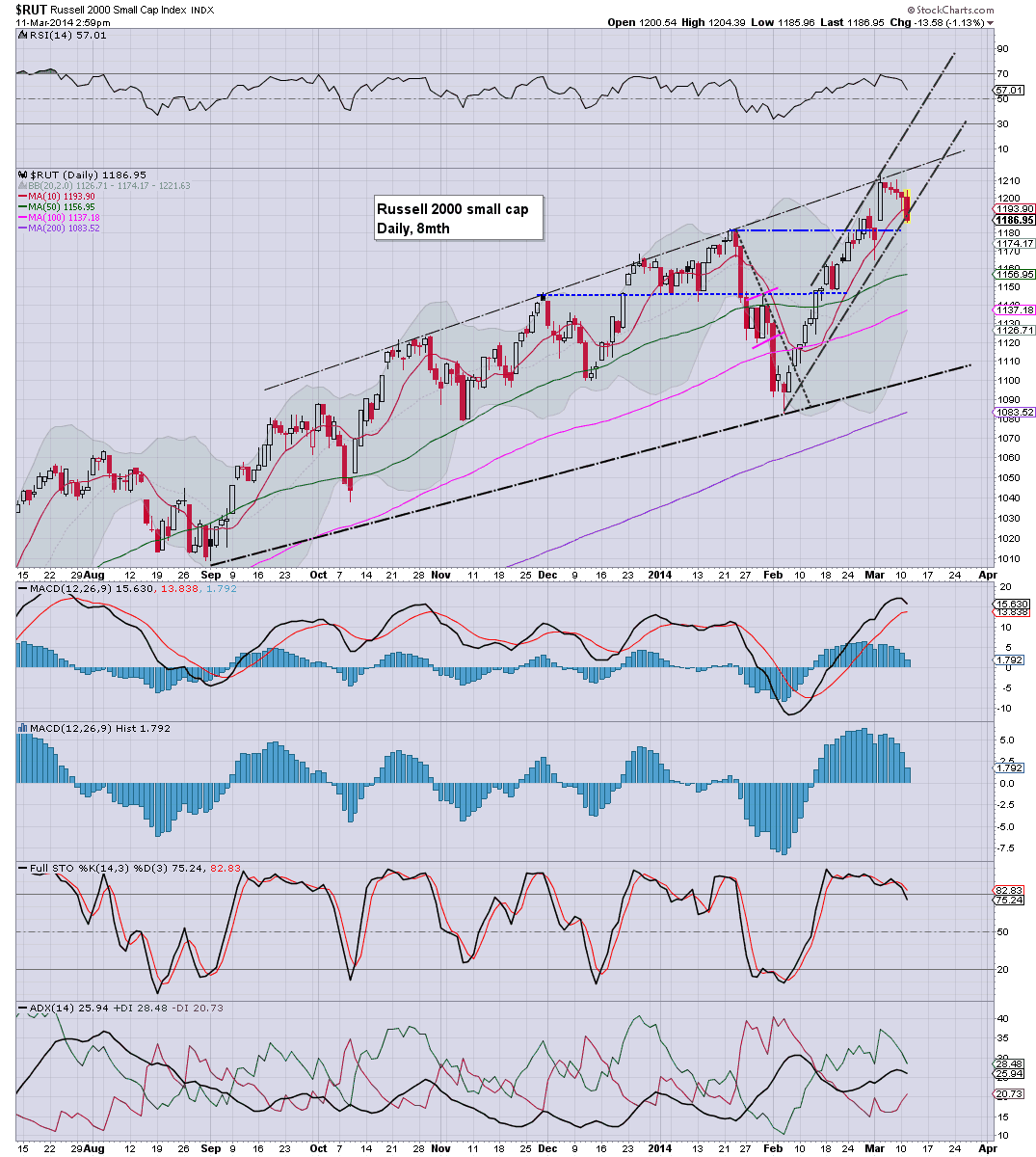 I wonder how many were chasing it higher this morning in the $11s, and are now vainly still holding long..with hopes of a rebound on Thursday earnings?
Posted by Trading Sunset at 18:51:00
Email ThisBlogThis!Share to TwitterShare to FacebookShare to Pinterest

Equity bears still lack any downside power, and despite a break <sp'1870, the bulls have little to be concerned about, at least into next week. Precious metals briefly turned red, but are on the rebound..Gold +$7. VIX is showing a fearless market...still a touch lower. 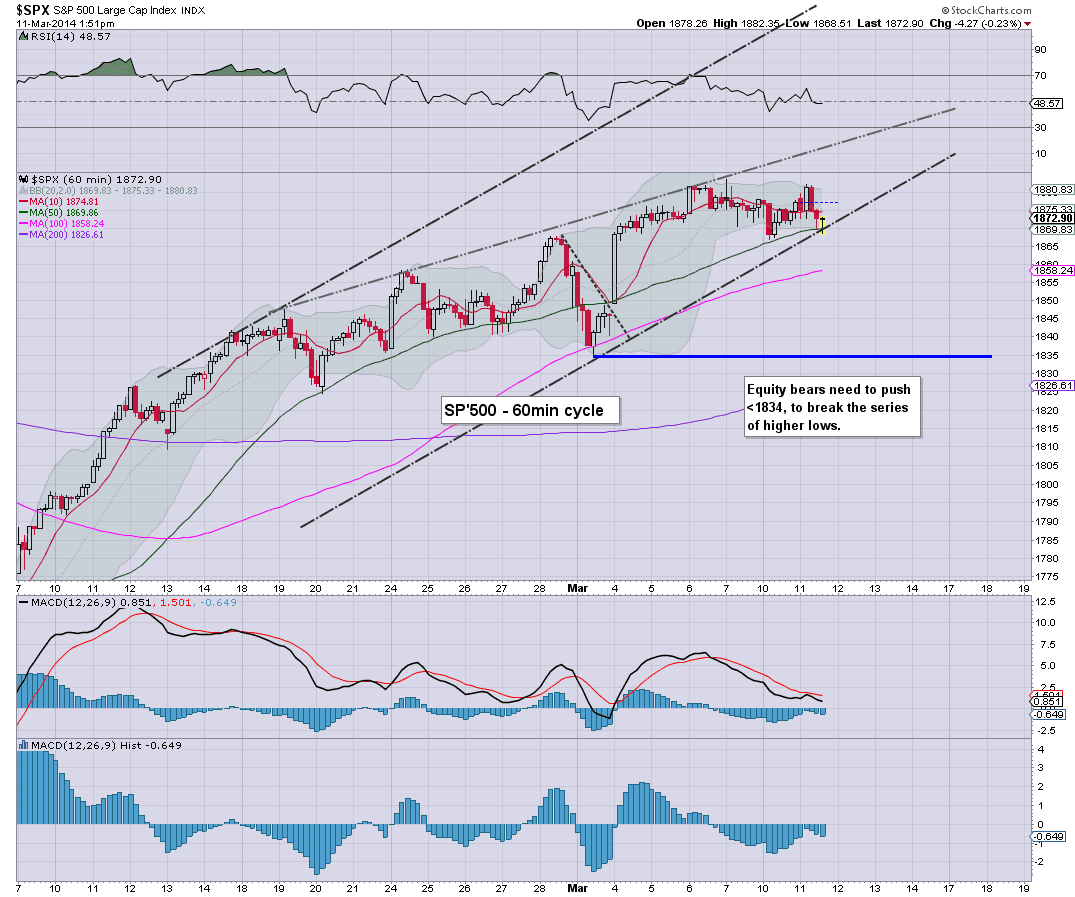 Indeed, all the bears seem able to muster are tiny little retraces of 0.25 to 0.5%...entirely negligible.
- 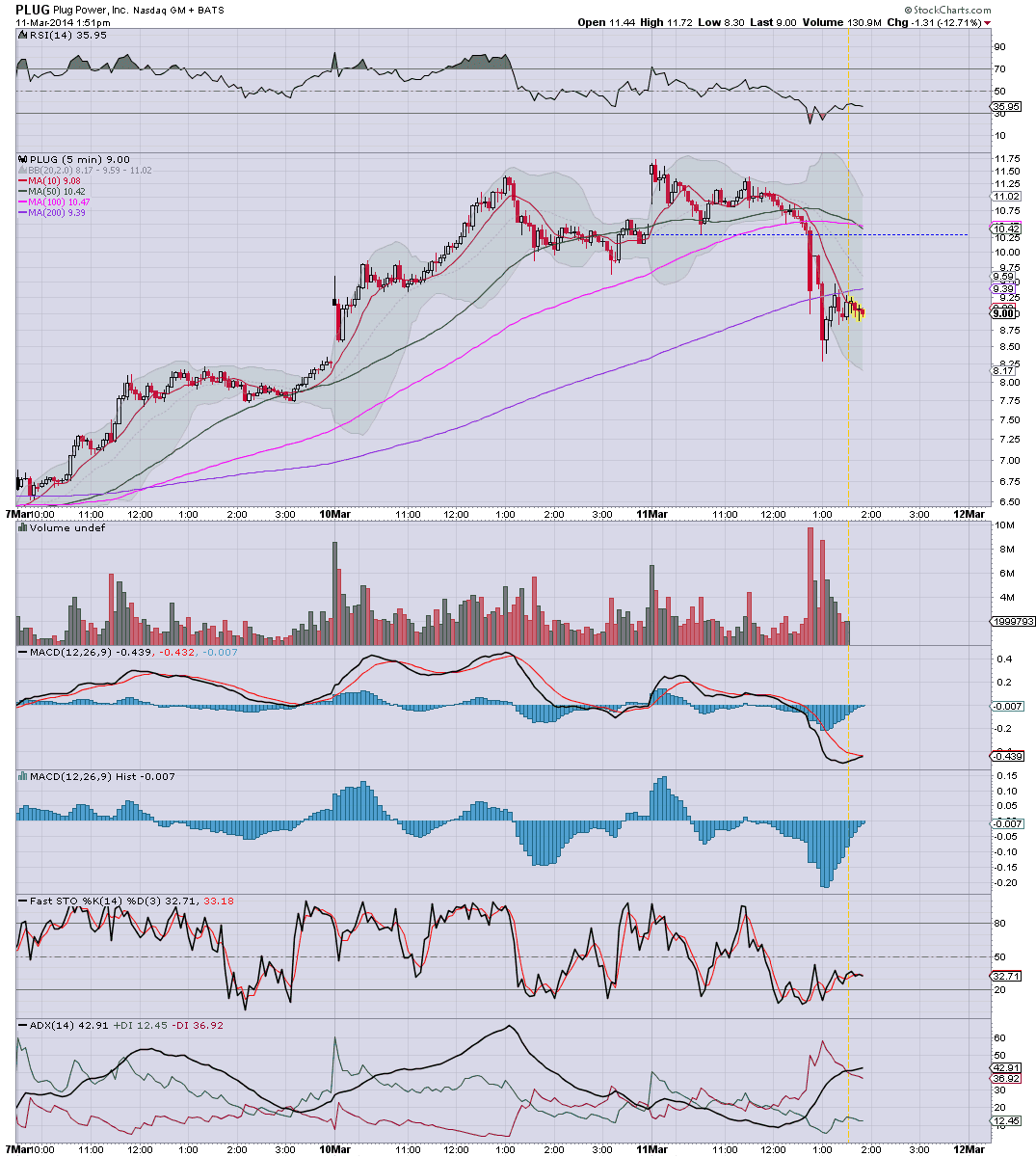 Some true hysteria, with heavy selling, resulting in a rather bizarre intraday gap lower.

2.15pm.. PLUG -24%...the entertainment...continues.
Posted by Trading Sunset at 17:53:00
Email ThisBlogThis!Share to TwitterShare to FacebookShare to Pinterest

Whilst the main indexes are seeing continued minor weak chop, there is some notable free entertainment available. Plug Power (PLUG) appears to be on the turn, and the herd are all trying to make an exit at once..this is car crash market entertainment at its finest. 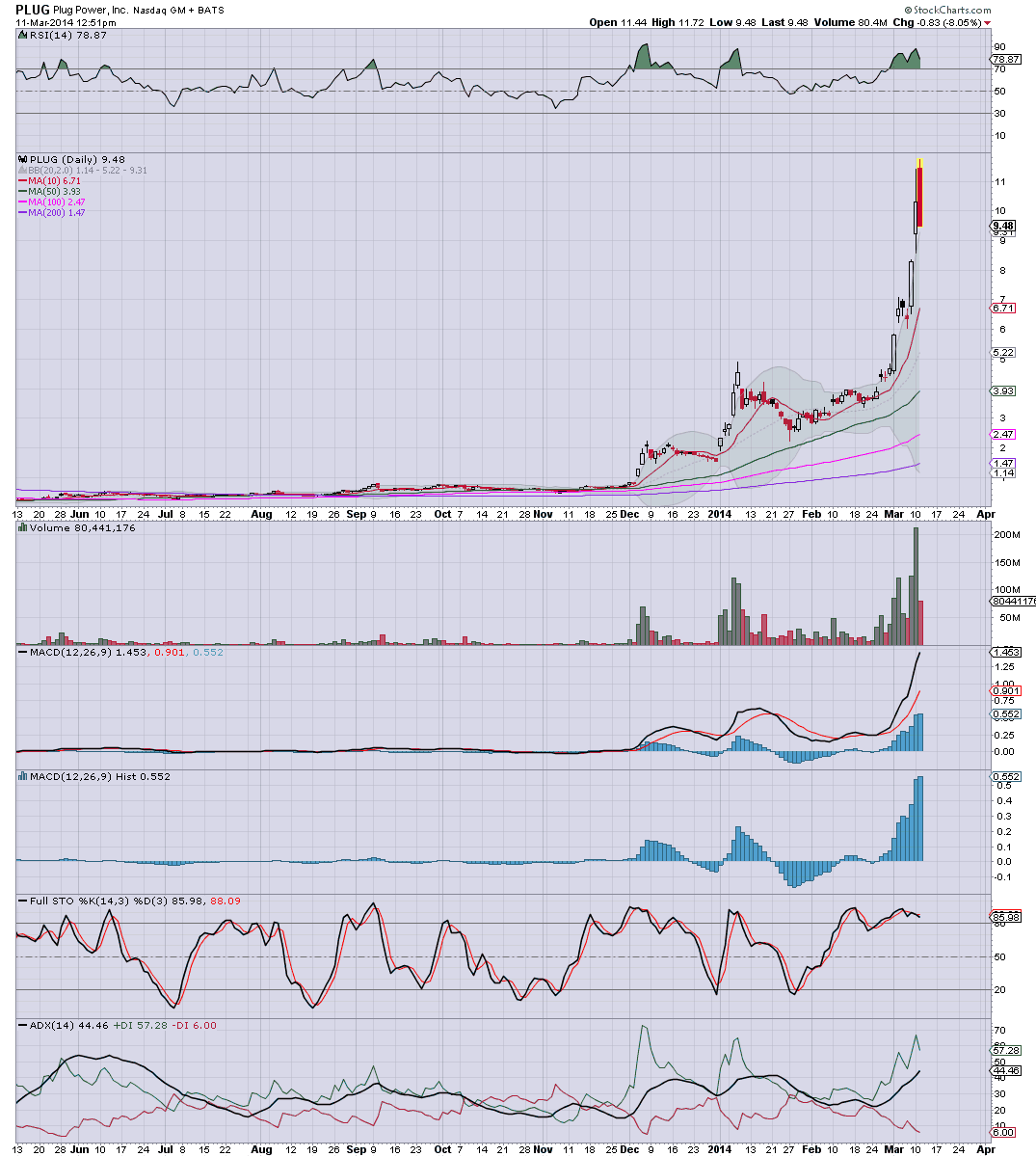 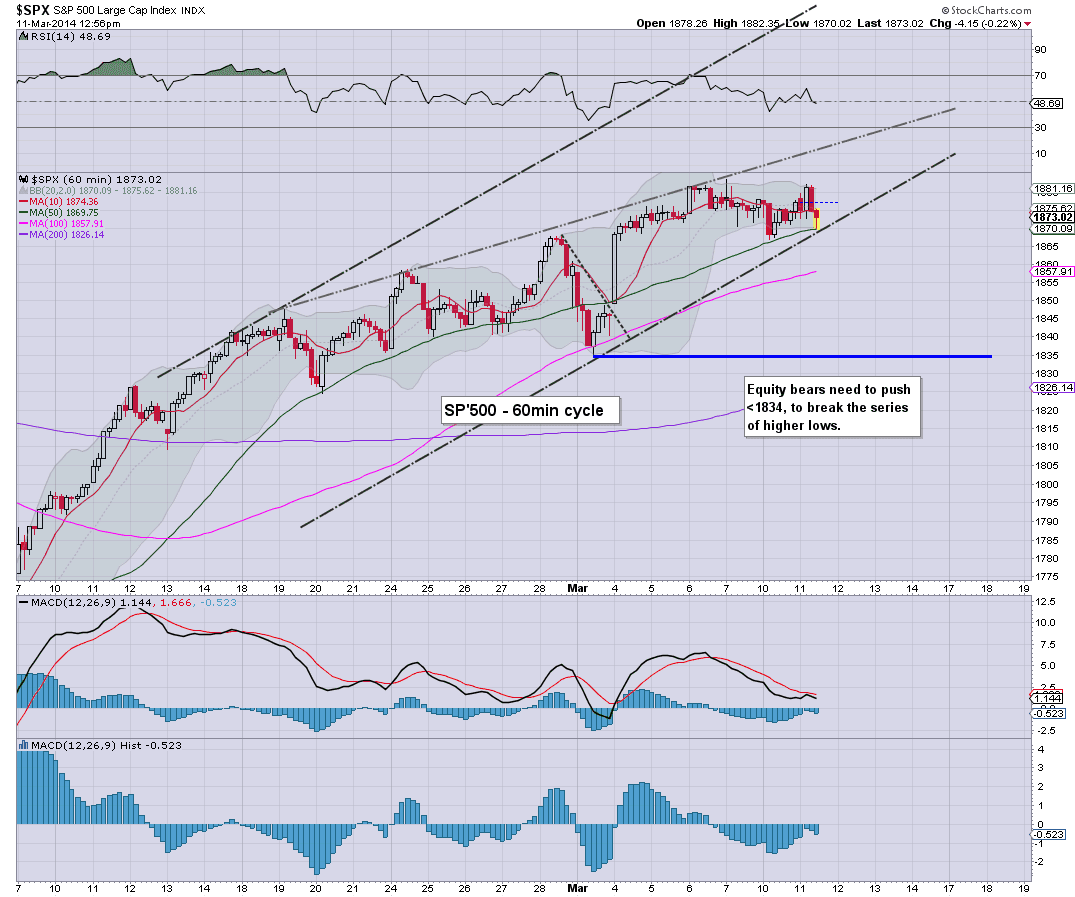 1.03pm.. PLUG -12.5%...and the retail amateurs will be starting to get real twitchy about now.
Posted by Trading Sunset at 16:52:00
Email ThisBlogThis!Share to TwitterShare to FacebookShare to Pinterest

US indexes continue to see minor chop in the sp'1882/72 zone. There is notable strength in the Transports, which is close to breaking another new high in the 7600s. Metals are starting to slip, Gold now just $1 higher, and seemingly about to turn red. 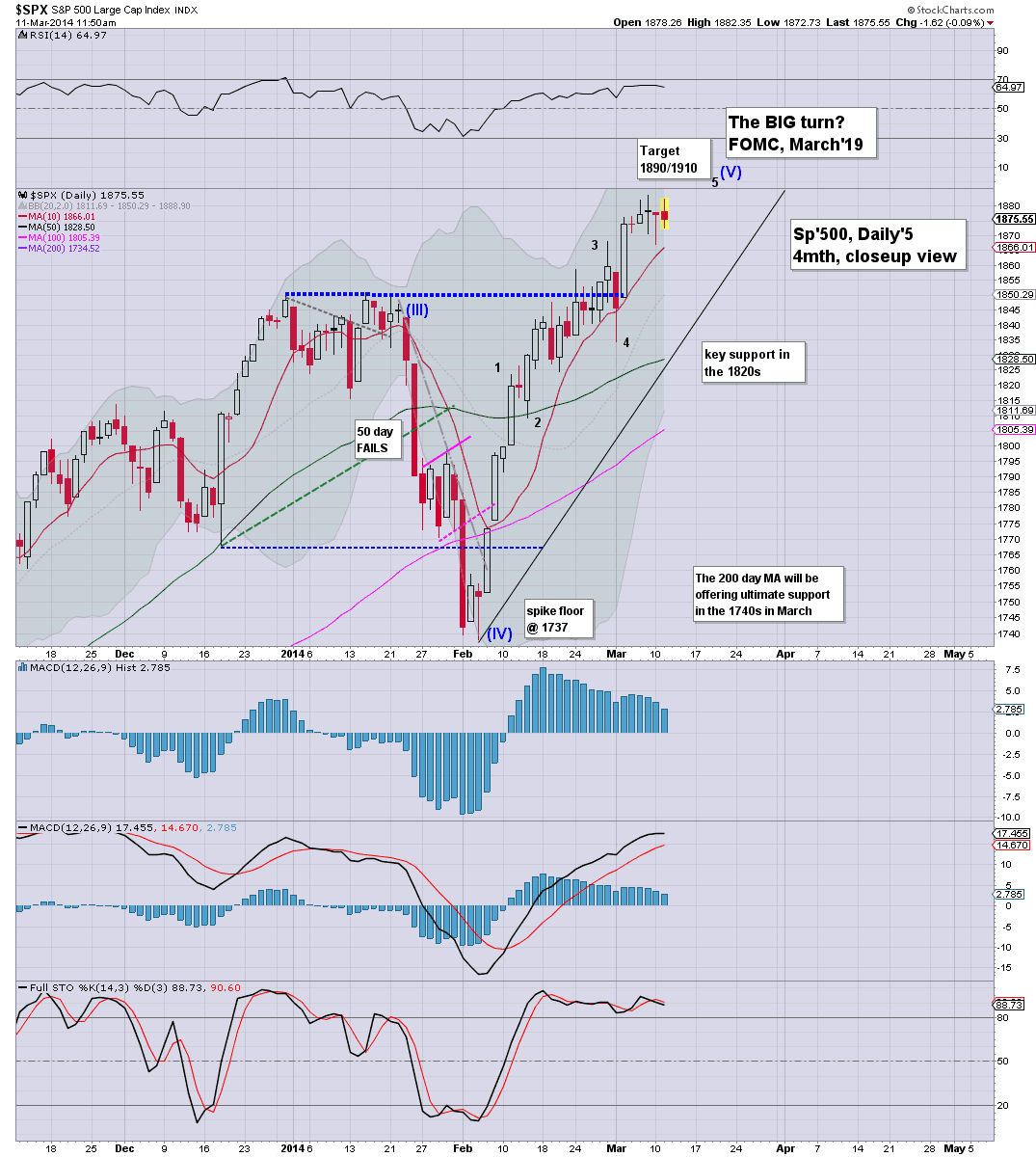 So..what to make of this morning?

Simply put, its just minor chop, and equity bears are still showing a complete lack of downside power. There is ZERO reason why anyone should be getting bearish ahead of the next FOMC.

More likely..the bull maniacs will claw another 1-2% higher by next Wednesday afternoon..and then maybe we'll see a turn.
-- 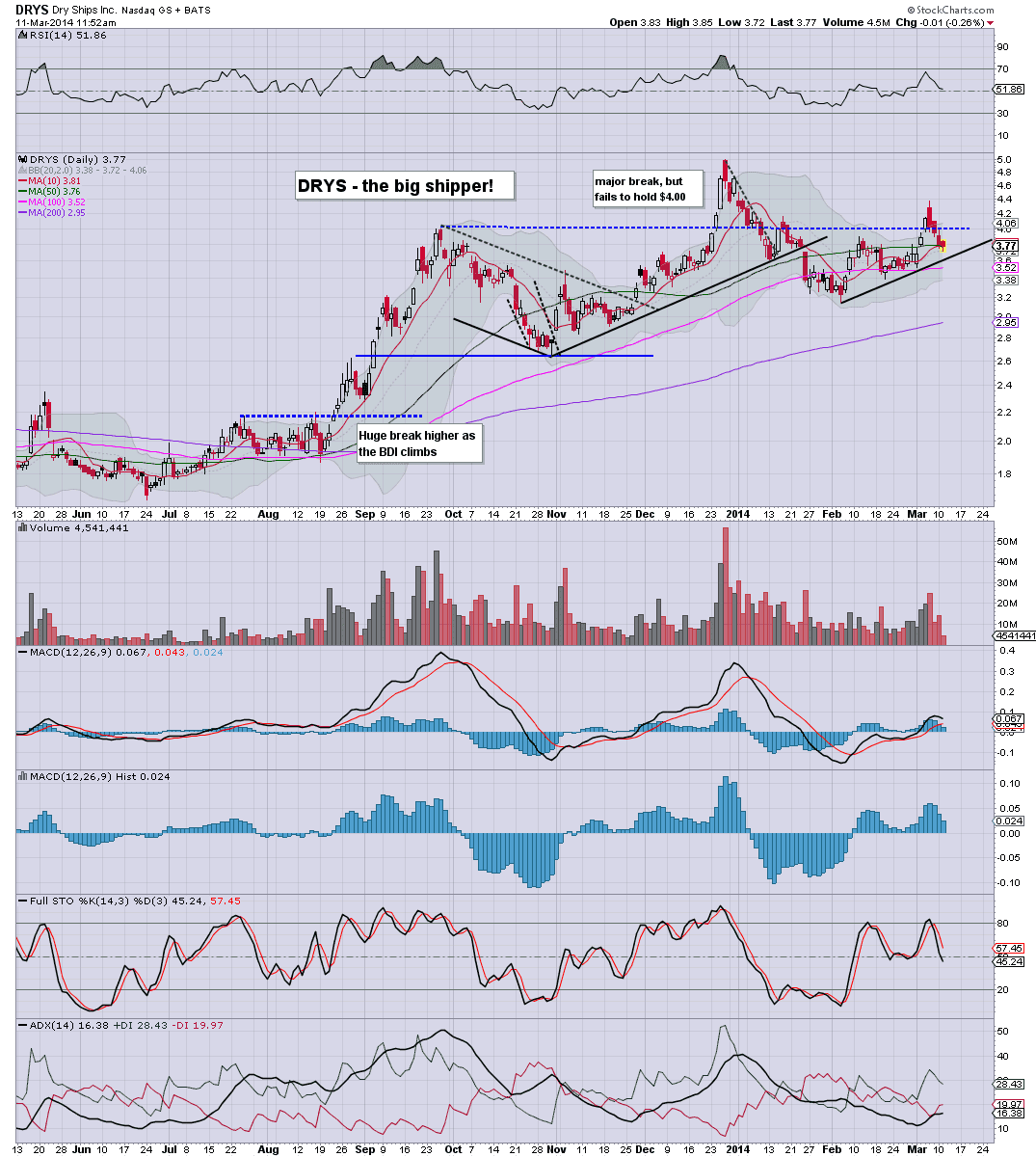 Another fractional break below the 50 day MA, and frankly..if the main market does top next week...DRYS is going to have some real problems. I'll probably look to pick up in the summer.
--


Indeed...no one is expecting any 'issues' between now and next Wednesday (VIX opex)..and the big money is rolling into April or May.
--
time for tea :)
-

Should be a RED flag for anyone to recognise.

see Finviz for updates.
Posted by Trading Sunset at 15:55:00
Email ThisBlogThis!Share to TwitterShare to FacebookShare to Pinterest

US equities see some opening chop, but the underlying upward pressure is there for anyone to see. A daily record close in the sp' 1885/90 zone seems very viable. Metals are holding moderate gains, Gold +$7, whilst Oil is again somewhat weak, -0.3%. VIX is again melting lower into the 13s. 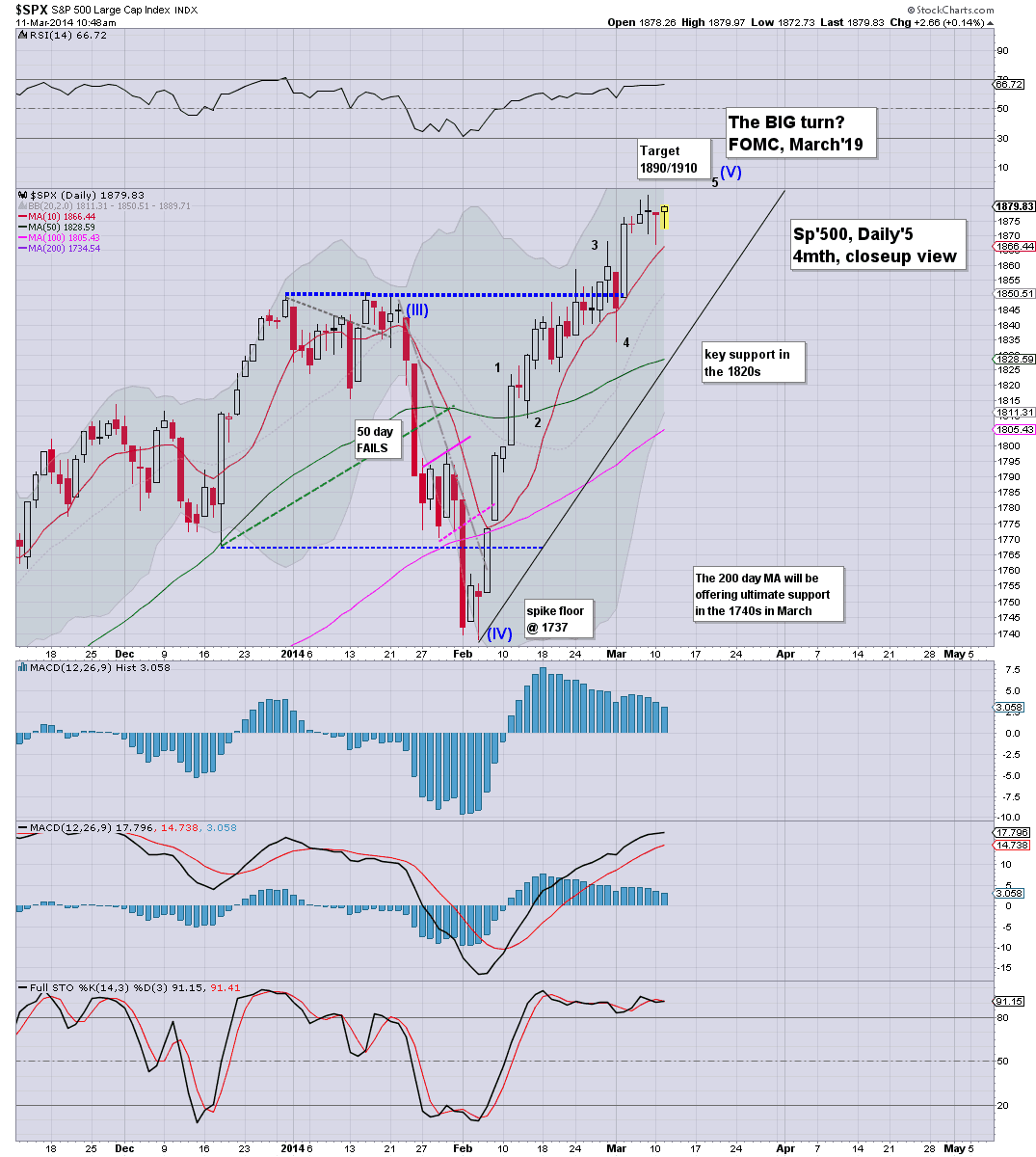 Not much to add. Hourly charts suggest a positive daily close, the only issue is whether its a fractional gain..or a push to a new high >1883. Considering the trend...probably the latter.
-

PLUG is higher, but the current daily candle is warning of a top.. 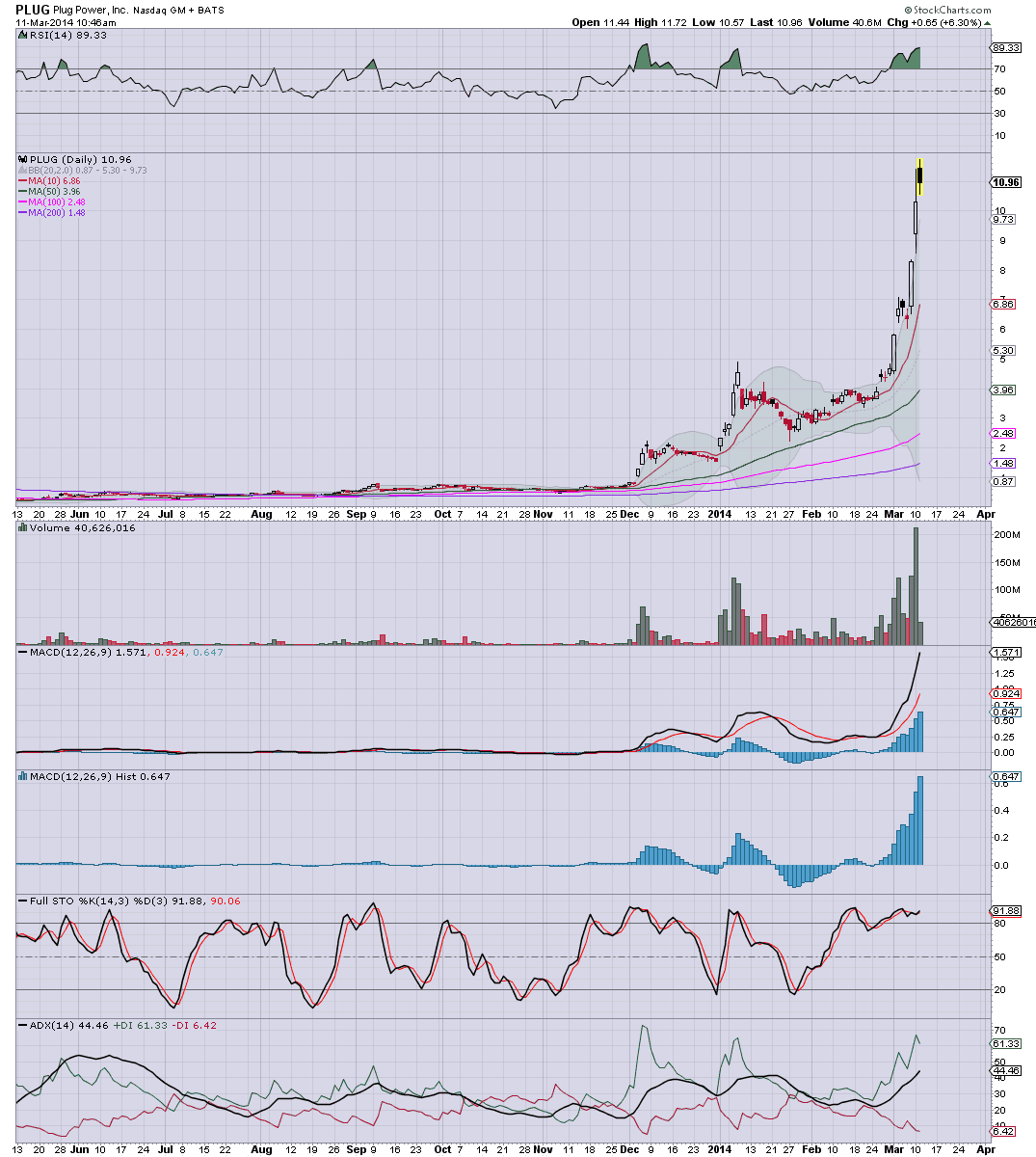 It will be highly entertaining to see the herd attempt to exit at the same time (earnings are due Thursday).
Posted by Trading Sunset at 14:49:00
Email ThisBlogThis!Share to TwitterShare to FacebookShare to Pinterest

Good morning. Futures are a touch lower, sp -2pts, we're set to open around 1875. Metals are showing some strength, Gold +$9, with Silver +1.5%. Equity bulls look set to break new highs this week, possibly into the sp'1890s, as supported by the bigger daily, weekly, and monthly cycles. 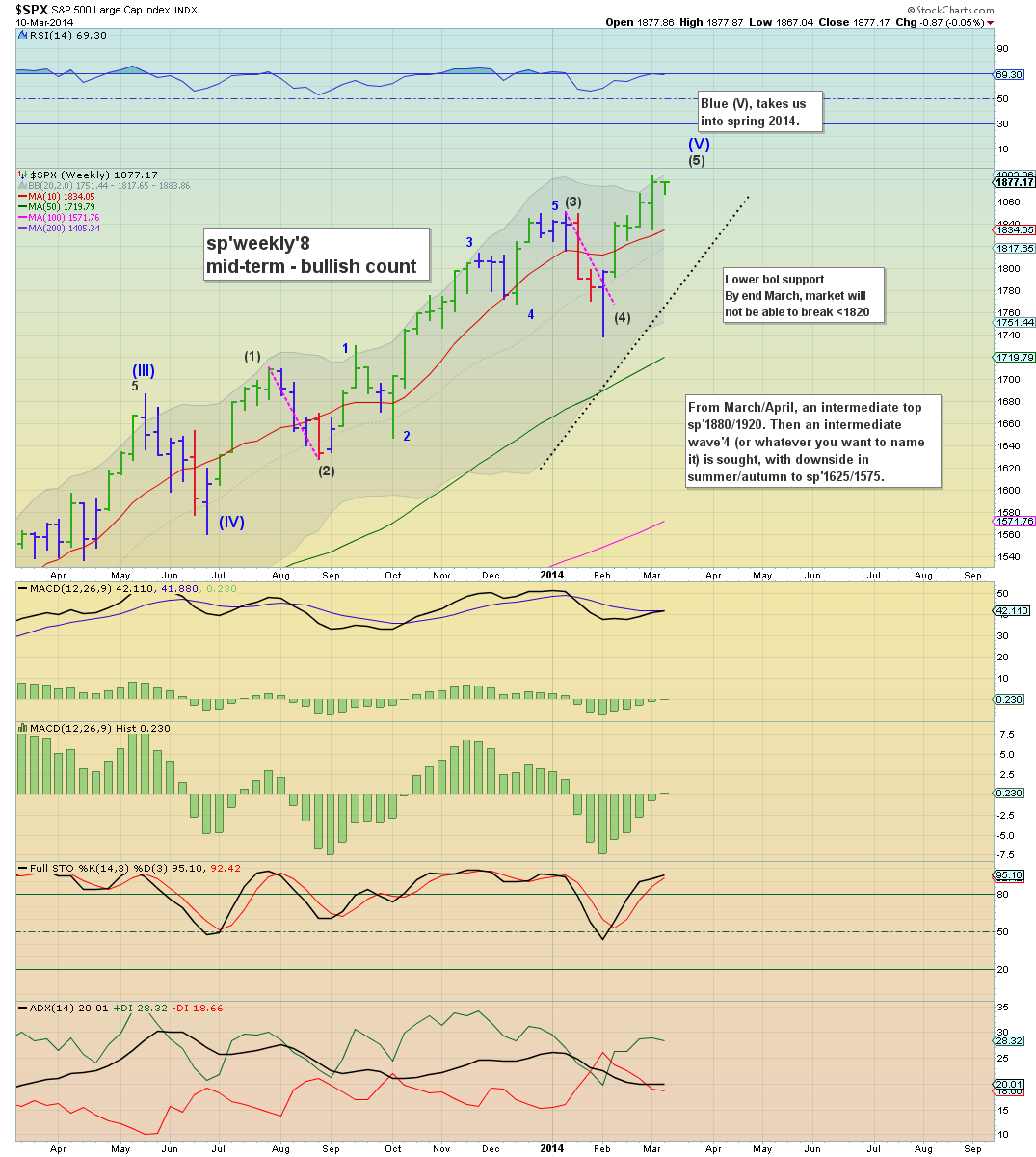 *however you want to count this nonsense, the trend remains outright bullish, and I'd guess we break new highs this week.
--

I'm not expecting much of today. There is no sig' QE for the bulls, although the hourly index cycle is due to start pushing higher.


10.38am...urghhh..are we open? lol   I can't deal with this clock change. back at 11am.
Posted by Trading Sunset at 12:30:00
Email ThisBlogThis!Share to TwitterShare to FacebookShare to Pinterest

Whilst the US market saw only minor declines by the close, far more notable was the continuing weakness in Copper prices. The big $3 threshold remains critical, and if we see a few daily closes <3, then it will be a major sign of trouble. 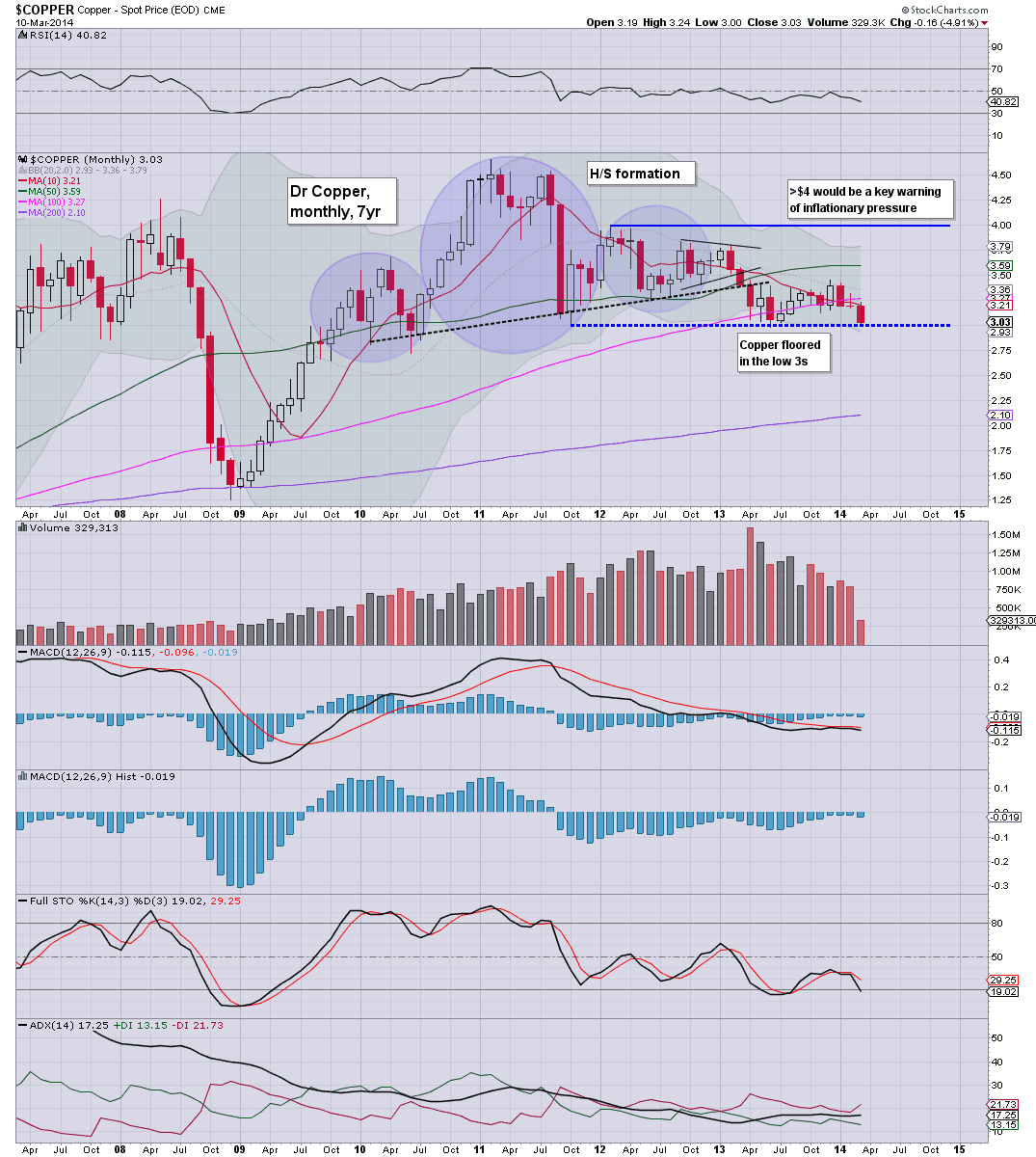 So, Copper is on the slide, and the $3 threshold has already been briefly broken in overnight Sun/Monday Asia trading.

A few daily closes under $3, and the door will be wide open to the 2.25/00 zone. Such a drop would have huge implications for the precious metals...if not also Oil/Gas/Coal prices. 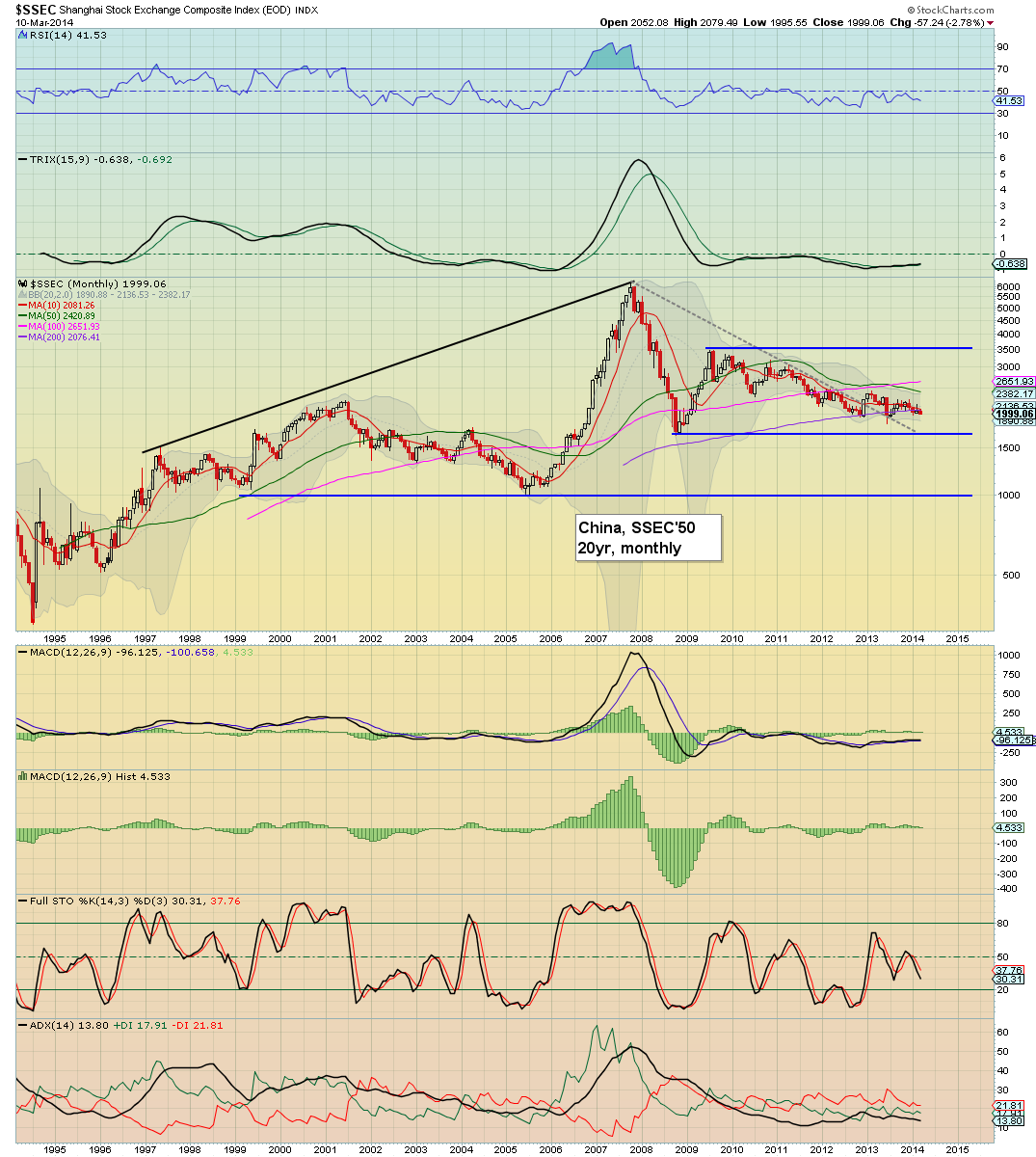 There isn't anything significant due tomorrow. Market will be free to dwell on any sporadic news, such as from Russia/Ukraine.

*next sig' Qe-pomo is not until Thursday.
-- 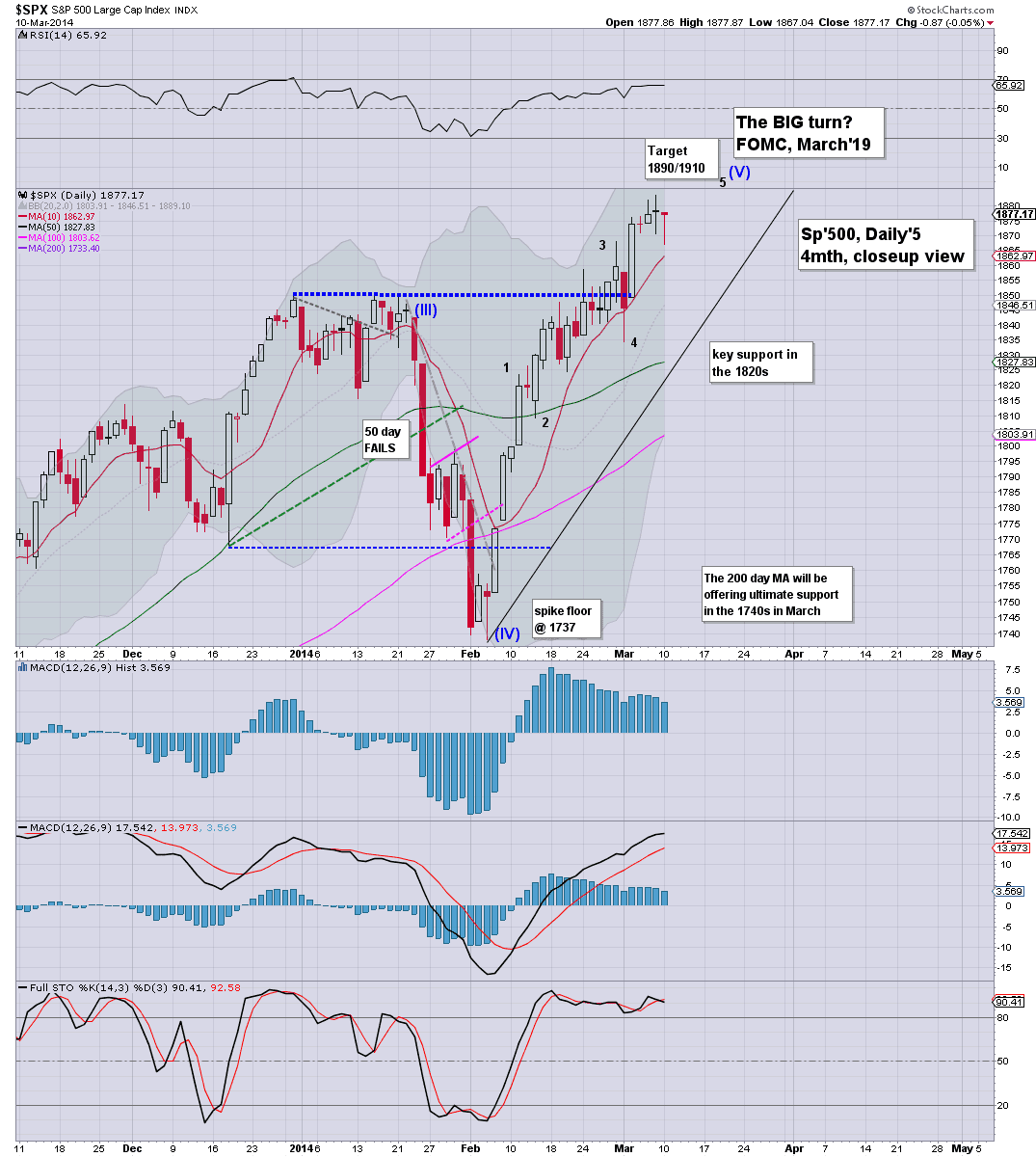 Equity bears have innumerable levels of support to break, not least the big 50 day MA, lurking in the 1820s. Primary trend looks set to hold at least into next week.
---

Question from a reader...

'I am confused. Not too many days ago you highlighted DRYS and said "if it got into the 4's then it would be good for a run into the 5's. Then it failed in the 4's and you thought it would attractive in the $3.75 - $3.80 range. Well, now it is "there" and now you don't like it at all. I bought in the low 4's but did not sell after dropping lower because I thought we were looking for a bounce at this level....now you think it is done and headed still lower? Thanks in advance on your thoughts, Ken Z.' 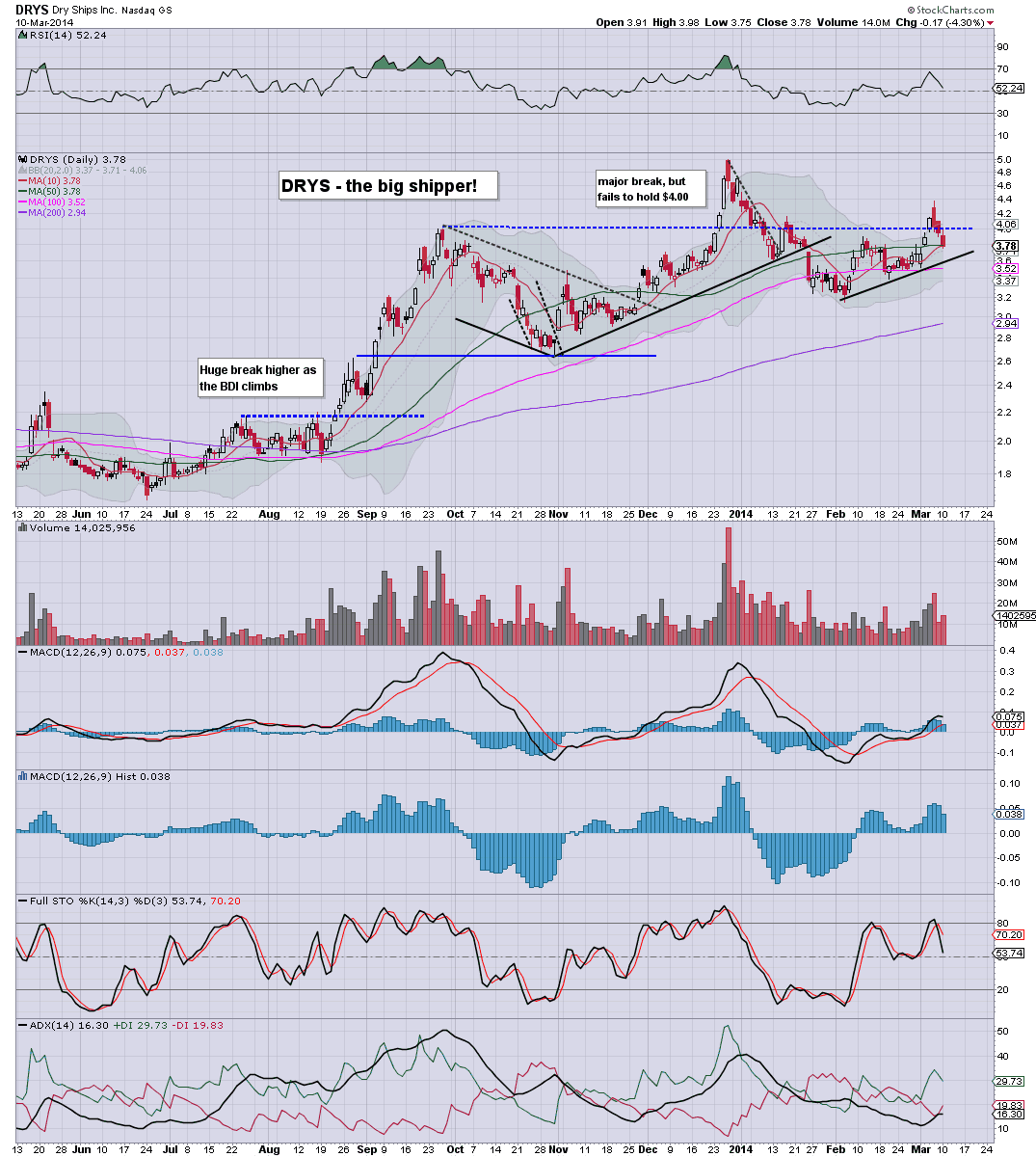 A daily close,right on the 10 AND 50 day MAs. Certainly, DRYS is 'somewhat on the edge'..although the broader trend is still broadly bullish from last summer.

As it is, price action just doesn't look so great. I guess its hard to explain it, but after watching this nonsense for so many years, there are times when even if something hits a buy target, I might still leave it alone.

*I should also note, I do not like seeing Copper (briefly break) <$3, along with the Shanghai Comp' <2000 (see later post @ 11pm EST). For me, they are another two variables that sway me from going long anything, not least a mere 7 trading days ahead of the next FOMC.

Call it a 'change of mind'...,'too afraid to buy'..or just 'not in the mood to get involved', but I do try to keep an open mind, regardless of targets.

This also applies to my primary intention to short the indexes on a possible 'brief FOMC' spike next Wednesday. I have a plan, but as ever..if the price action just looks overly strong, then I'll wait some more.

The one thing I am sure of, each day that we get closer to the spring, the safer the bears will be, when it comes to shorting the indexes. With just over 7 trading weeks until May, equity bulls will be facing a concrete wall of resistance.
--