A very dull trading day, with the indexes closing moderately lower, and the VIX closing moderately higher. Yet the VIX remains in bizarrely low territory, until we see the VIX over 20, any index declines are not to be taken seriously. 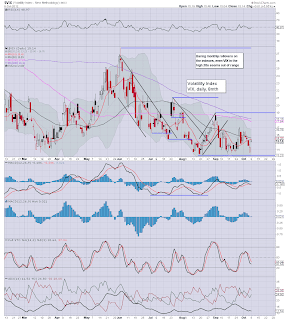 I certainly won't take any index declines seriously until we see the VIX break* back over 20.

*A weekly VIX close >20, remains my third 'red flag for the Autumn'.

Hitting even 20 seems just so high up, urghh..thats 30% higher! Considering the state of the MACD and the total lack of trading volume, it seems very unlikely we'll be reach 20 in the near term.

More later
Posted by Trading Sunset at 23:00:00
Email ThisBlogThis!Share to TwitterShare to FacebookShare to Pinterest

Dull. What else needs to be said? With volatility still so low, this market is back to the same level of tedium we experienced in August. Until we see VIX back above 20, there really isn't much point in being involved, unless you're a HFT algo-bot of course. 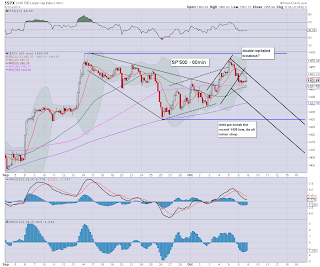 So, moderate declines. I've added a potential down channel, but frankly, that seems unlikely. There is a very high chance we'll just gap right over it tomorrow morning.

We remain a mere 1.5% from the QE highs, and if you look at the MACD (blue bar histogram) cycle, we're now floored, and starting to crawl higher.

Only with a break below the recent low of 1430, and more crucially - 1397, will the bears be able to claim the June up cycle has ended.

Bits and pieces across the evening.
Posted by Trading Sunset at 21:03:00
Email ThisBlogThis!Share to TwitterShare to FacebookShare to Pinterest

Are we going to chop sideways all the way into the pointless charade that is the 'US election'? We've been stuck in a tight range since the QE spike of 1474-1430 - a mere 3% range. With the VIX still in the low teens, there is just no fear in this market. No fear of what happens after the election, no fear of anything. 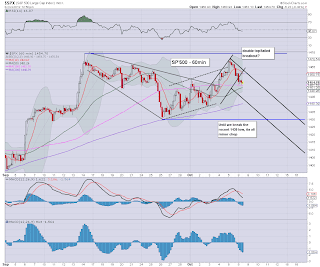 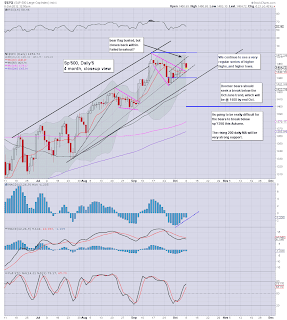 I'm really tired of this market, and its only Monday. With volatility so low, its largely pointless to even be involved.

Until VIX is back above 20, there just isn't any point.

AAPL down again, but then..its still in a hugely strong up trend, and its still one of the cheapest stocks out there - relative to all the other over-hyped trash like FB. 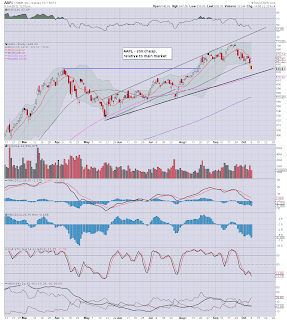 It'll probably hold the lower channel, if not, then maybe some interesting has begun, but I'm guessing that won't happen.

Arguably, for most 'normal' traders, its surely a case of 'turn it all off, come back mid' November - in prep' for what could possibly be a very strong Santa rally.

back after the close.
Posted by Trading Sunset at 17:56:00
Email ThisBlogThis!Share to TwitterShare to FacebookShare to Pinterest

A tiresome start already. Market slips sp'7 pts, and that seemingly looks like the low of the morning. With the hourly cycles floored on all the indexes, there is now potential for 10-15 trading hours up. 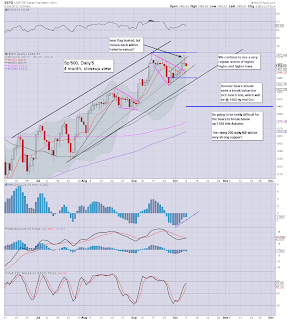 There really isn't much to say, until we're back under 1450, and again try to break <1440, the bulls are completely in control.

Considering the state of the hourly cycle, I'd guess there is a only a small chance we'll close <1450 today. There just is NOT any downside momentum/strength.

I suppose some could argue that with Oil and the Metals weak, that is suggestive of 'something', but really, no.

back at 1pm
Posted by Trading Sunset at 15:56:00
Email ThisBlogThis!Share to TwitterShare to FacebookShare to Pinterest

10am update - urghh, another week begins

Forgive me if I'm not entirely enthusiastic about yet another week. Until we see a VIX back in the 20s, I'm just not going to get much wrapped up in any of this nonsense. 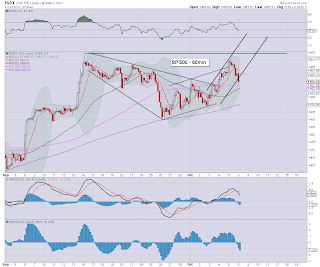 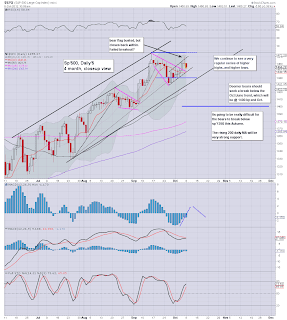 The hourly cycles are a mess.

However, the daily  cycles are actually rolling over, and a close under 1450 would be pretty interesting.

The key issue is whether last Fridays break higher - above the bear flag, was a failed break. Bears need a close <1450, preferably 1430s this week, to confirm that failure.

back at 11am, when maybe a bit more dynamic action will have started.
Posted by Trading Sunset at 15:11:00
Email ThisBlogThis!Share to TwitterShare to FacebookShare to Pinterest
Newer Posts Older Posts Home
Subscribe to: Posts (Atom)