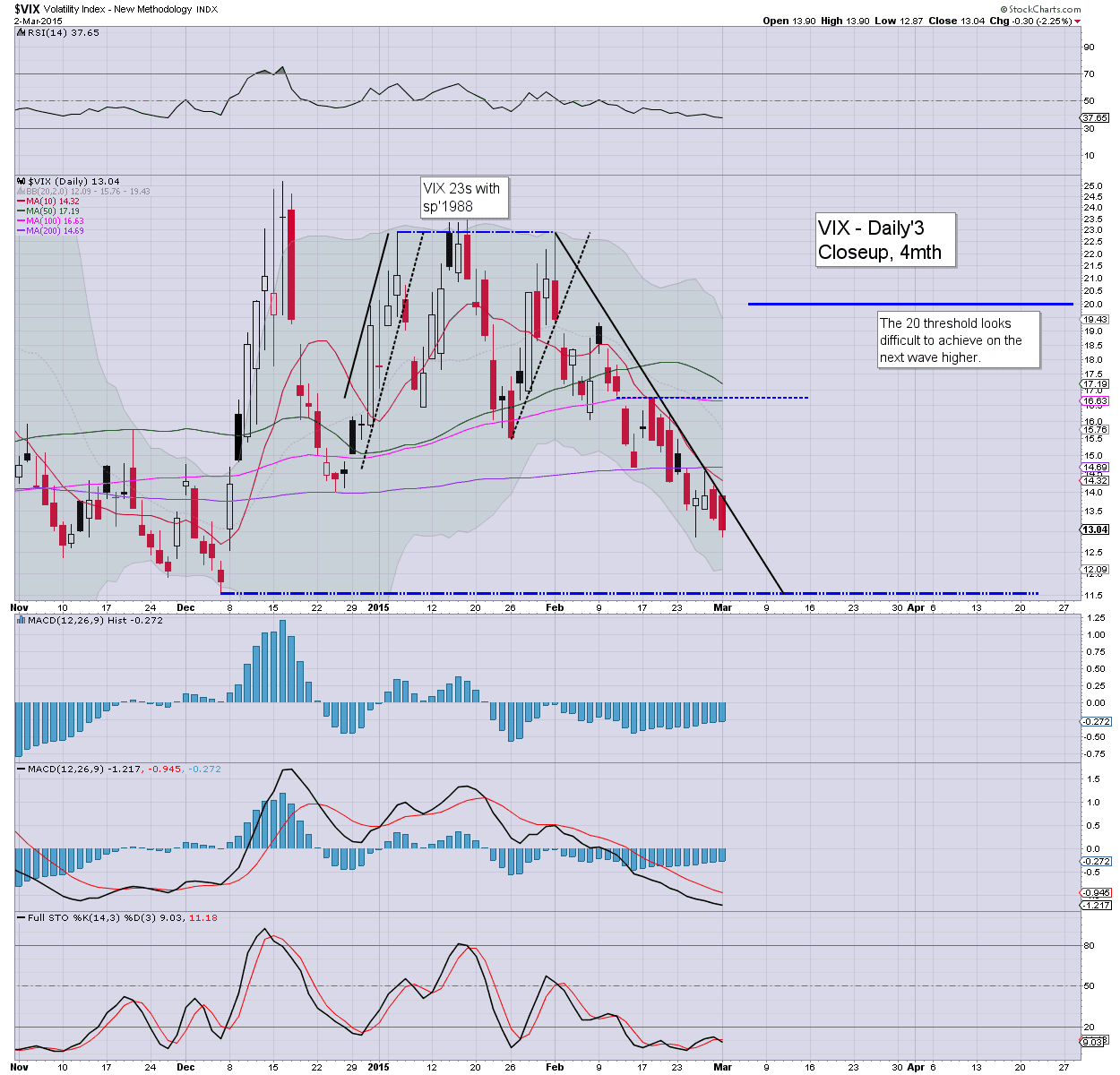 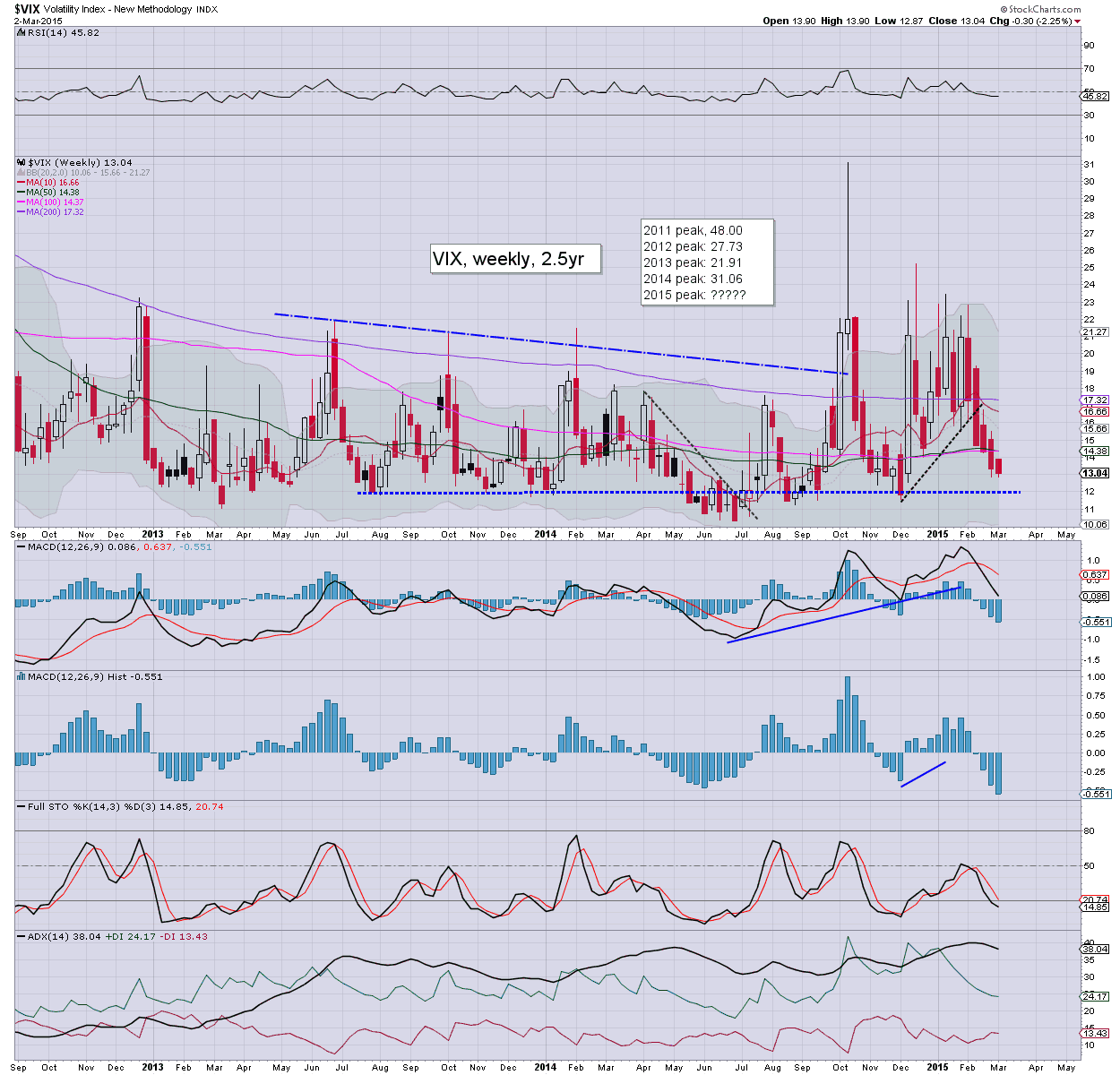 *I would not normally highlight the weekly cycle on a Monday. However, note the MACD (blue bar histogram) cycle.. it has never been lower since March 2012, and that was on the back of VIX 40s in Oct'2011. 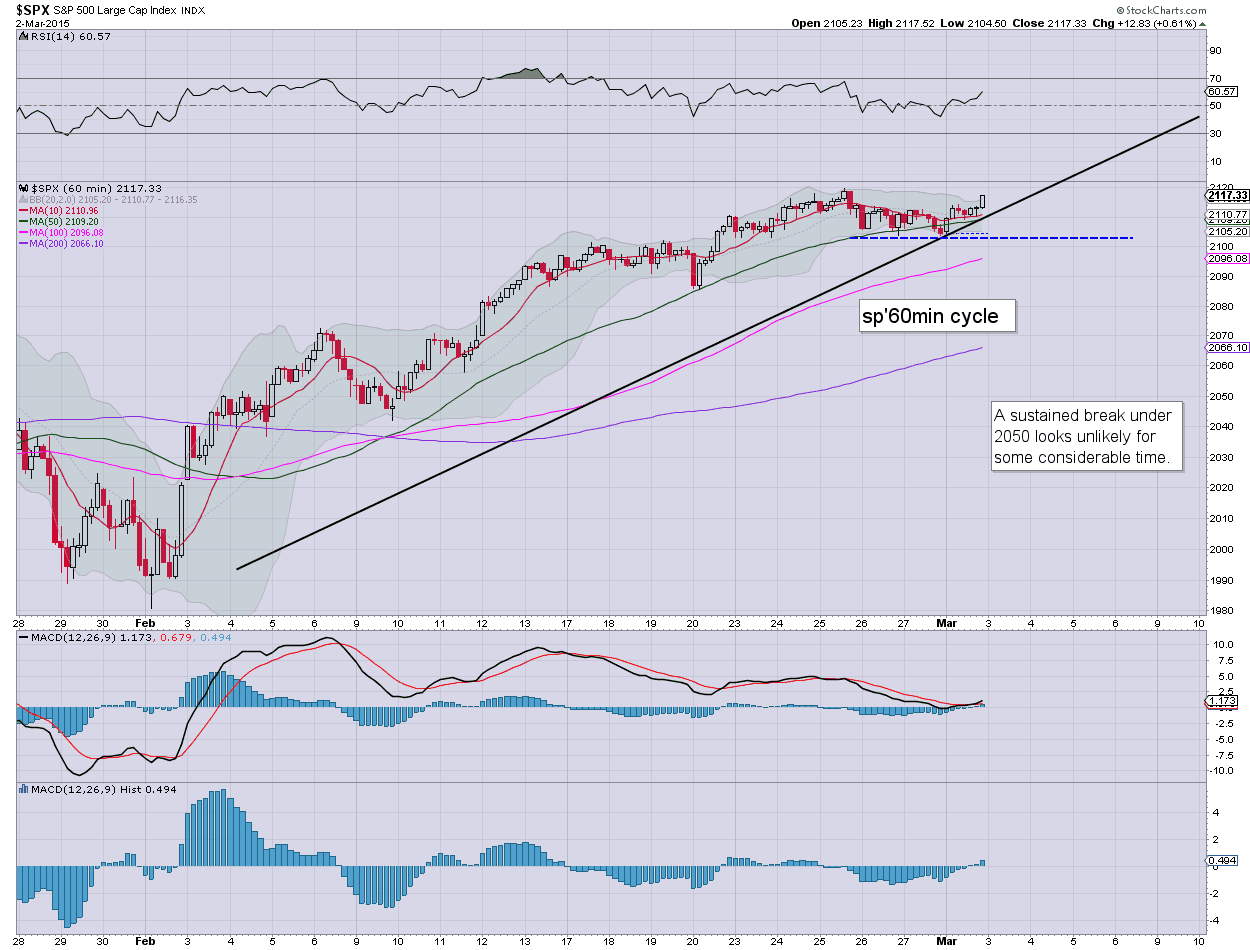 A pretty tedious day to start the month.... as the market continues to just broadly grind higher.

Overall price action remains muted... on relatively low volume (much of which is of course via the central banks... and via corporate buybacks).

Equity bears have little hope until late April/May. Even then.. a correction will be from much higher levels.. and the resultant cycle low might be where we are currently trading.
--


more later... on the VIX
Posted by Trading Sunset at 21:02:00
Email ThisBlogThis!Share to TwitterShare to FacebookShare to Pinterest

Regardless of the exact close, it has been a start to a new month, with new highs for the R2K, Dow, and most notably.. the Nasdaq Comp @ 5K. Metals remain broadly weak, Gold -$4, with Silver -1.3%. Oil has significantly cooled from earlier gains, +0.9%. VIX remains subdued in the low 13s. 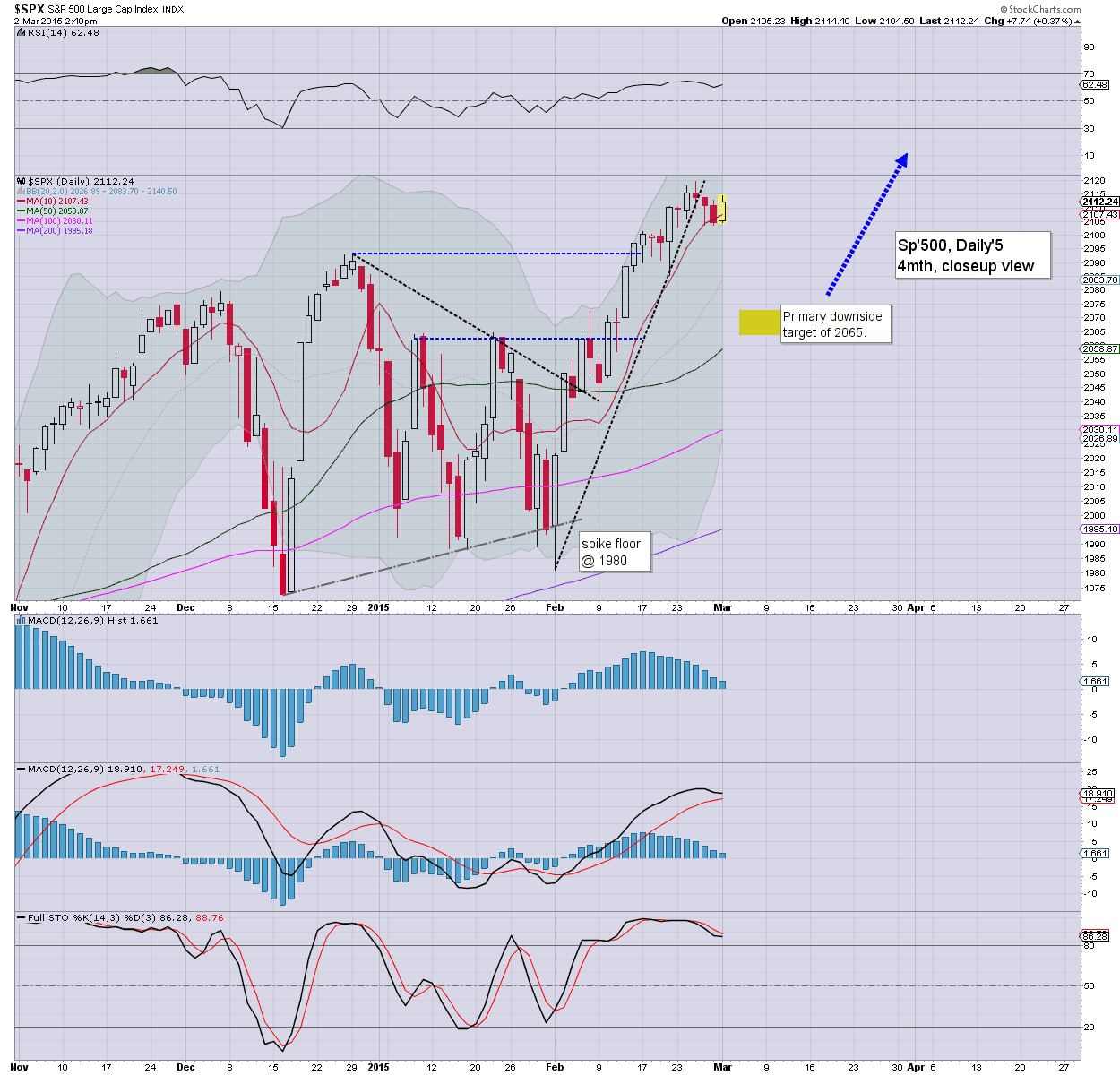 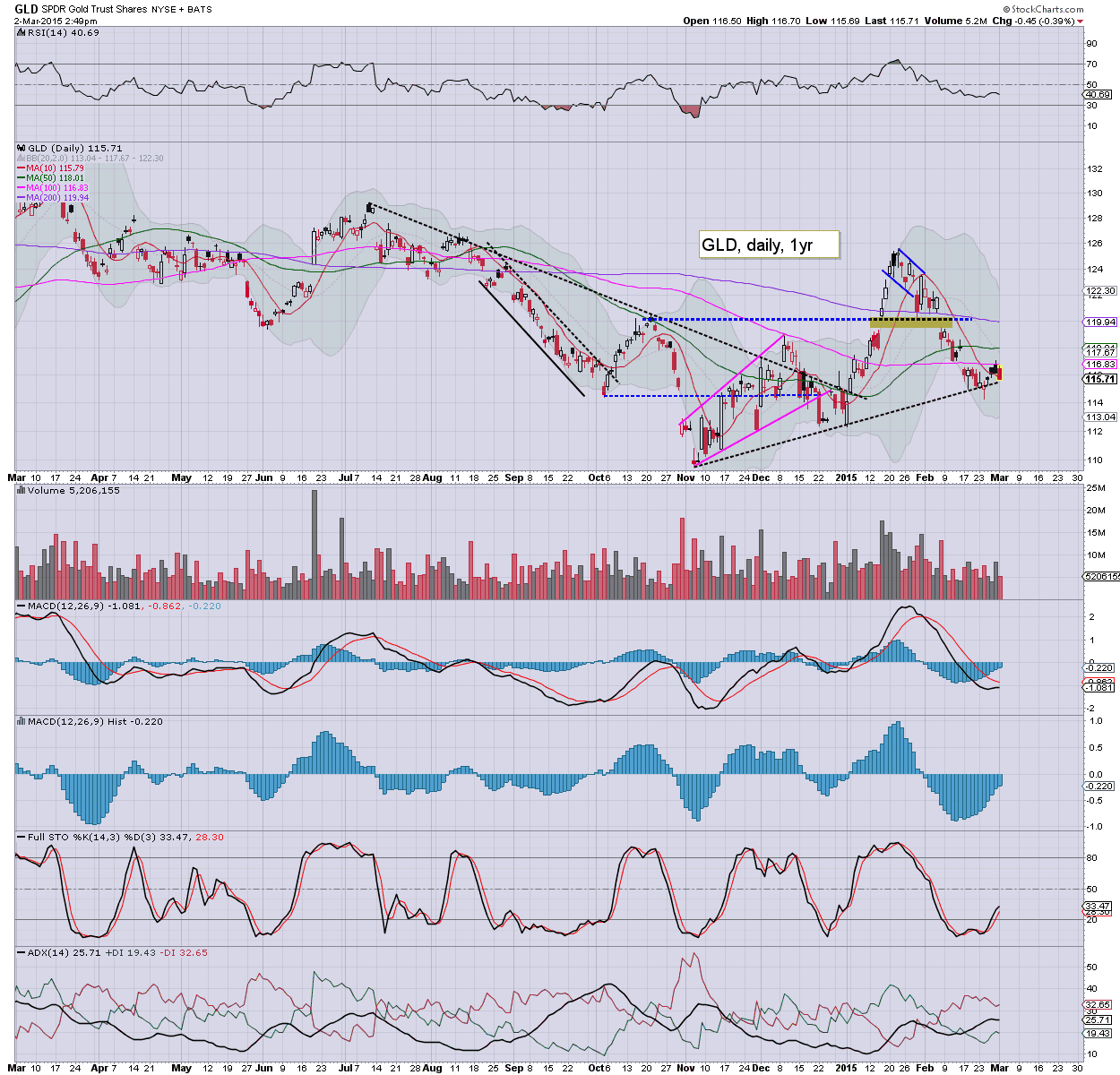 *the declines in Gold are nothing significant, but still.. its a bearish start to the month. Lately, overnight gains has almost always evaporated.
--

back at the close... unless we break <2107.
Posted by Trading Sunset at 19:52:00
Email ThisBlogThis!Share to TwitterShare to FacebookShare to Pinterest

US equities are holding moderate gains, sp +8pts @ 2112, as reflected in a VIX that remains extremely subdued in the low 13s. Metals are weak, Gold -$2. Oil is cooling from earlier strong gains, now +1.7%. 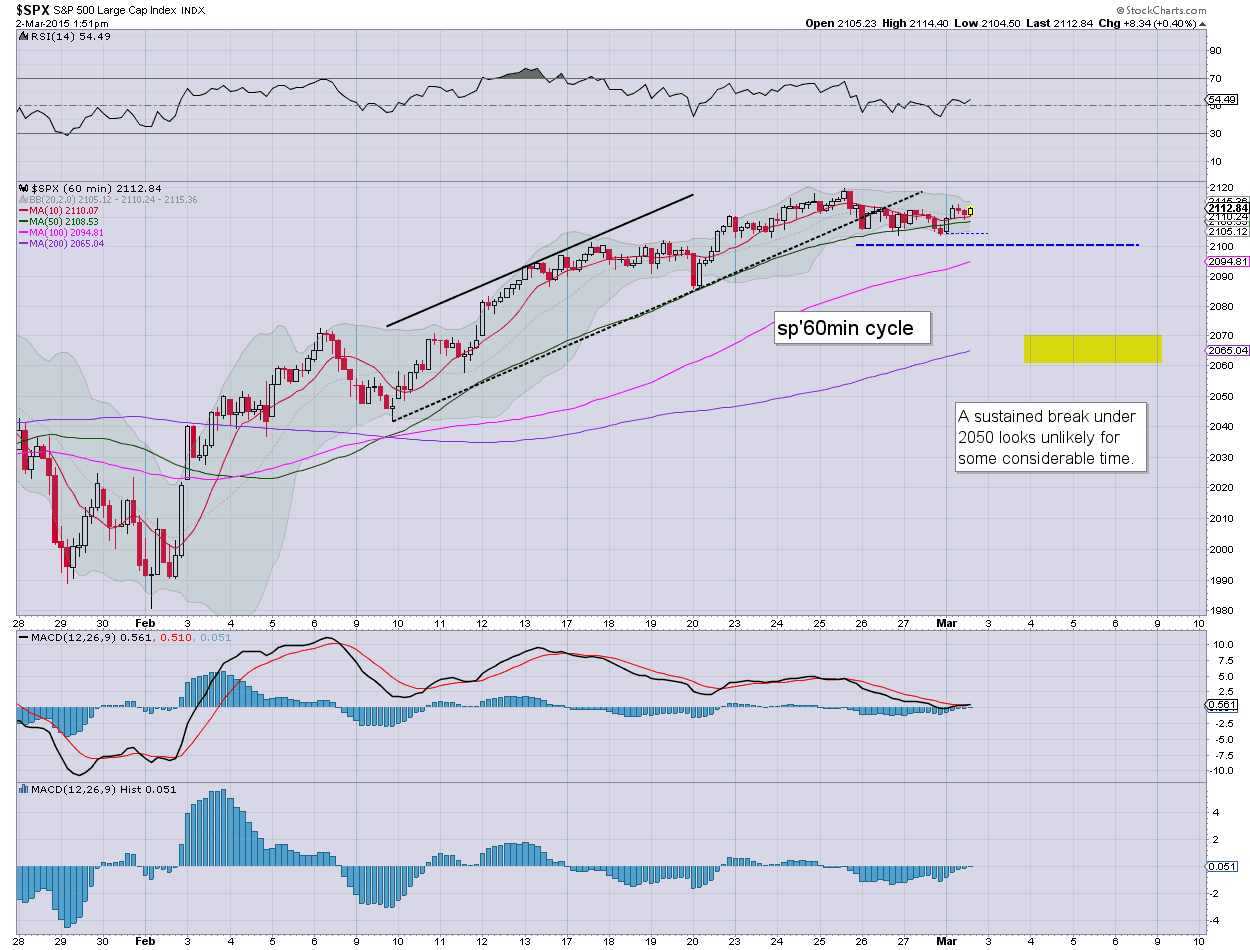 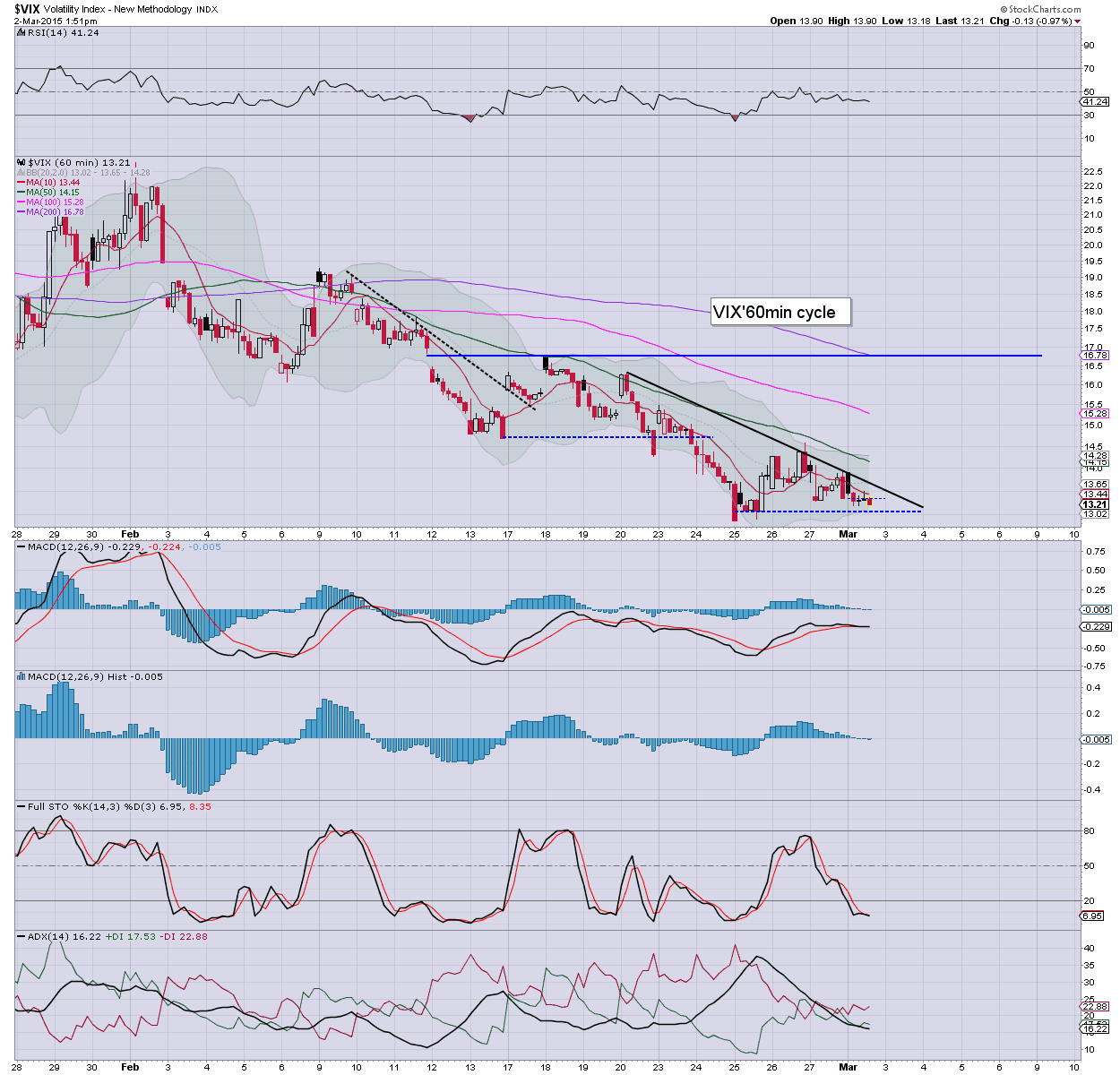 Little to add... on what is just another day of new historic highs... not just for the Nasdaq, but the R2K and Dow
--

A minor down wave from sp'2114 to 2109, with VIX to the 13.50s... but regardless of any intraday weakness, the equity bulls have achieved another key victory today with new historic highs on a trio of indexes. Metals remain weak, Gold -$2, with the miners ETF of GDX -2.1% 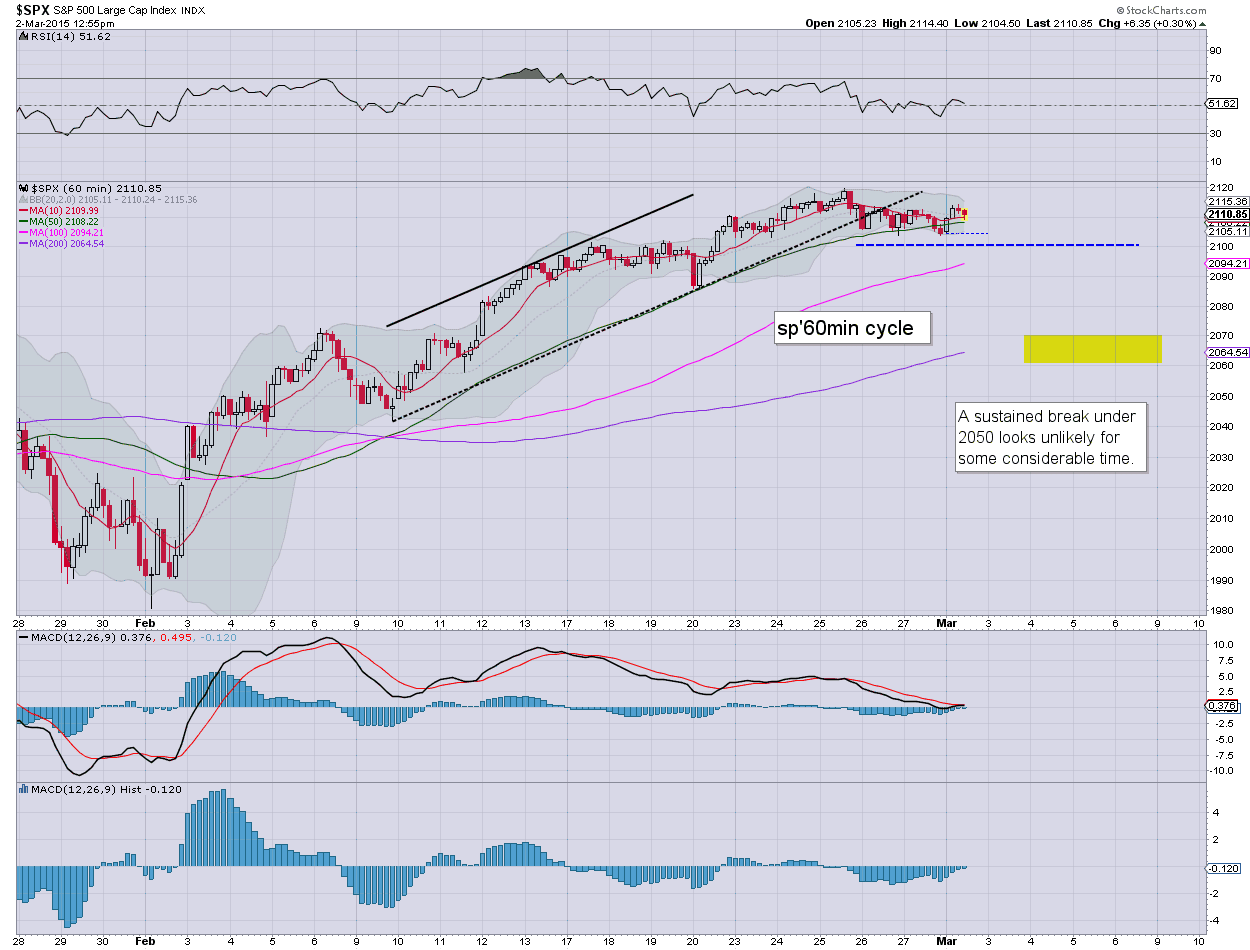 Little to add. A net daily decline looks increasingly unlikely. The opening black-fail candle in the VIX was arguably the tell.
-- 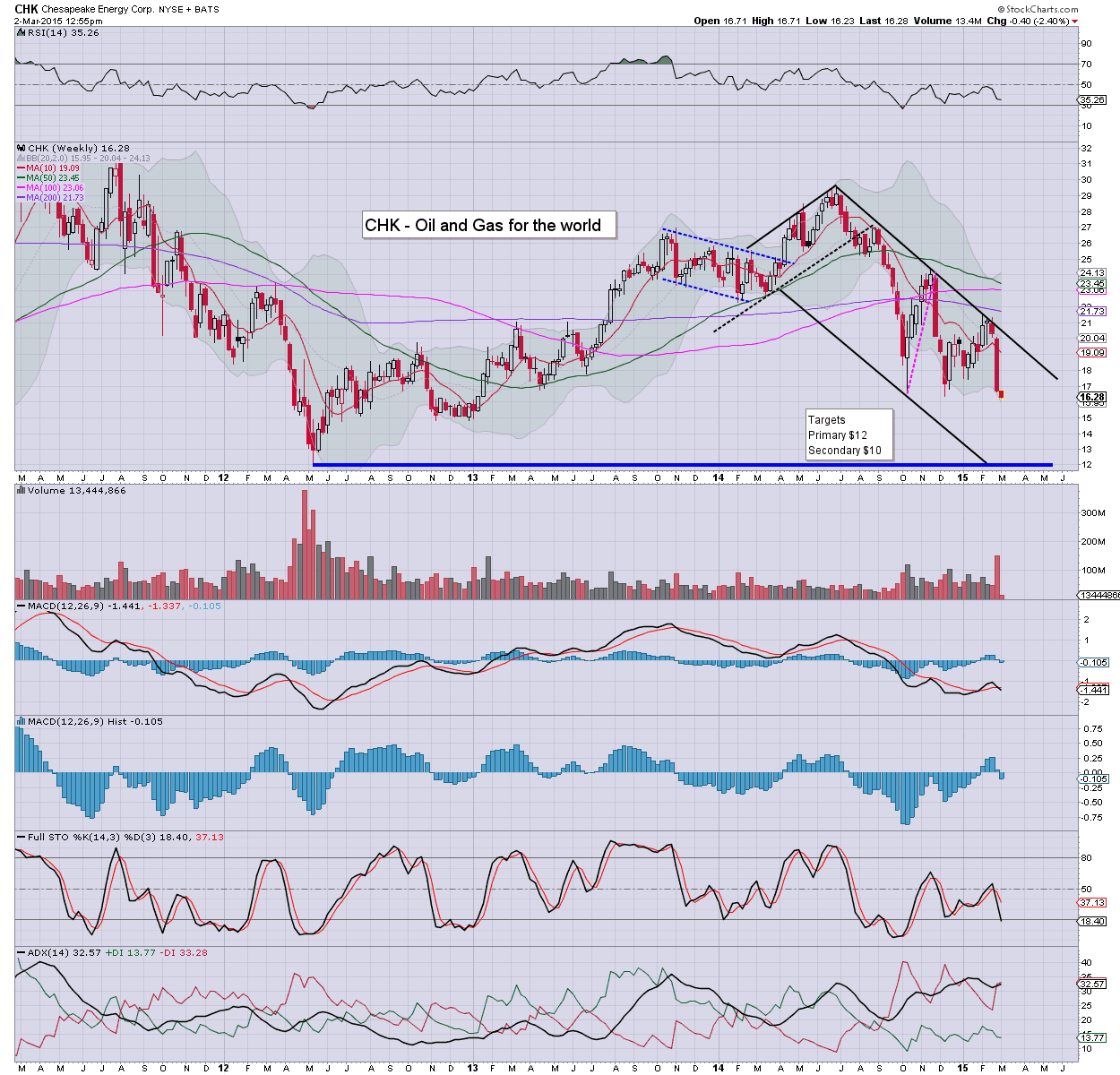 ...merely continuing to slip after last weeks horror. Downside target zone remains 12/10... which looks well within range this spring/early summer.
Posted by Trading Sunset at 17:57:00
Email ThisBlogThis!Share to TwitterShare to FacebookShare to Pinterest

US equities remain moderately higher, with new multi-year highs for the Dow, R2K, and Nasdaq Comp', although the sp'500 remains under the recent high of 2119. Metals remain broadly weak, Gold -$2.. impacting the miners, GDX -1.6%. Oil continues to build gains, +2.8%. 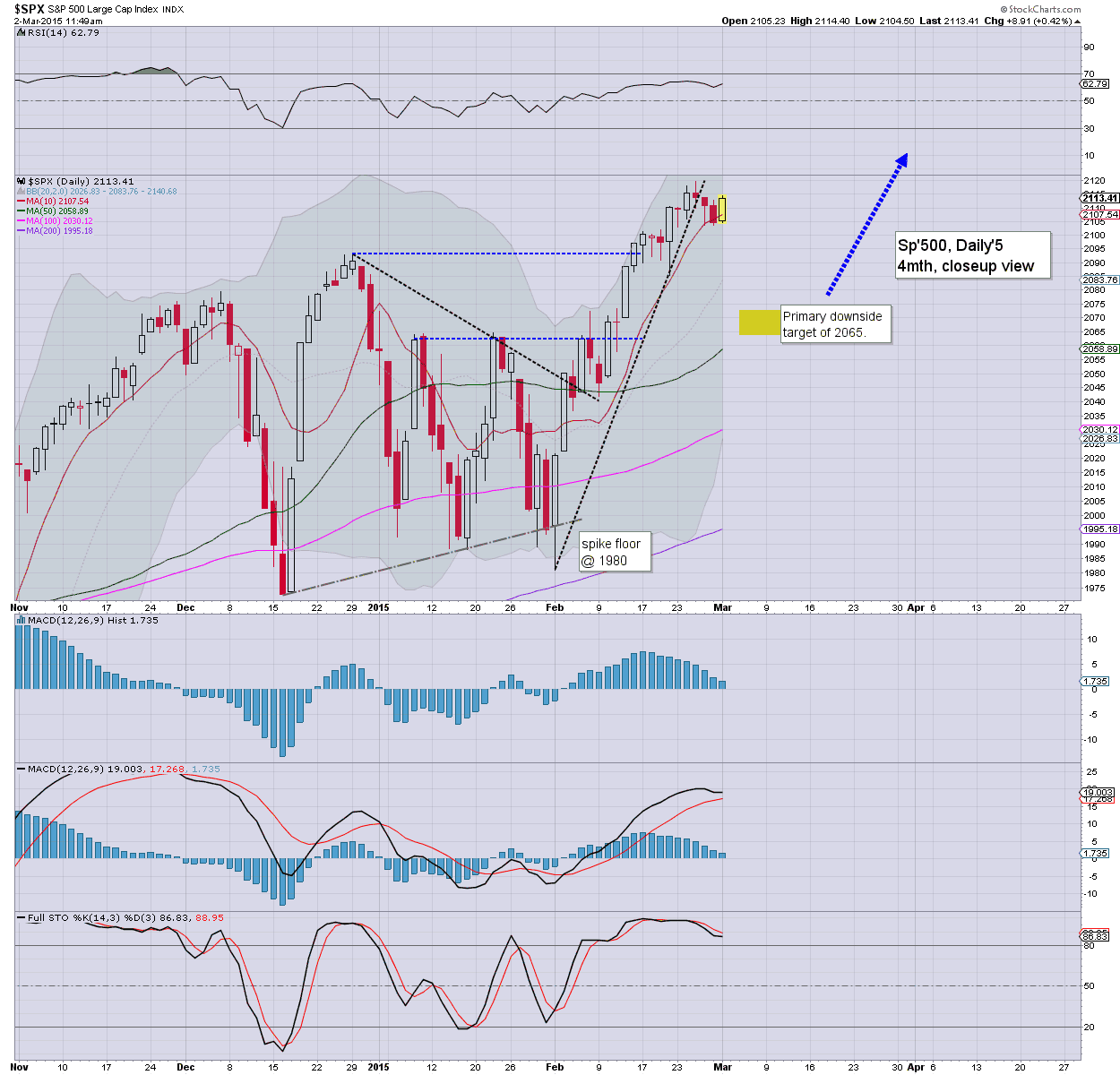 For those still seeking a retrace, this remains tedious. The one good thing is that there are at least some scheduled events/data points this week to help generate at least a little price action. 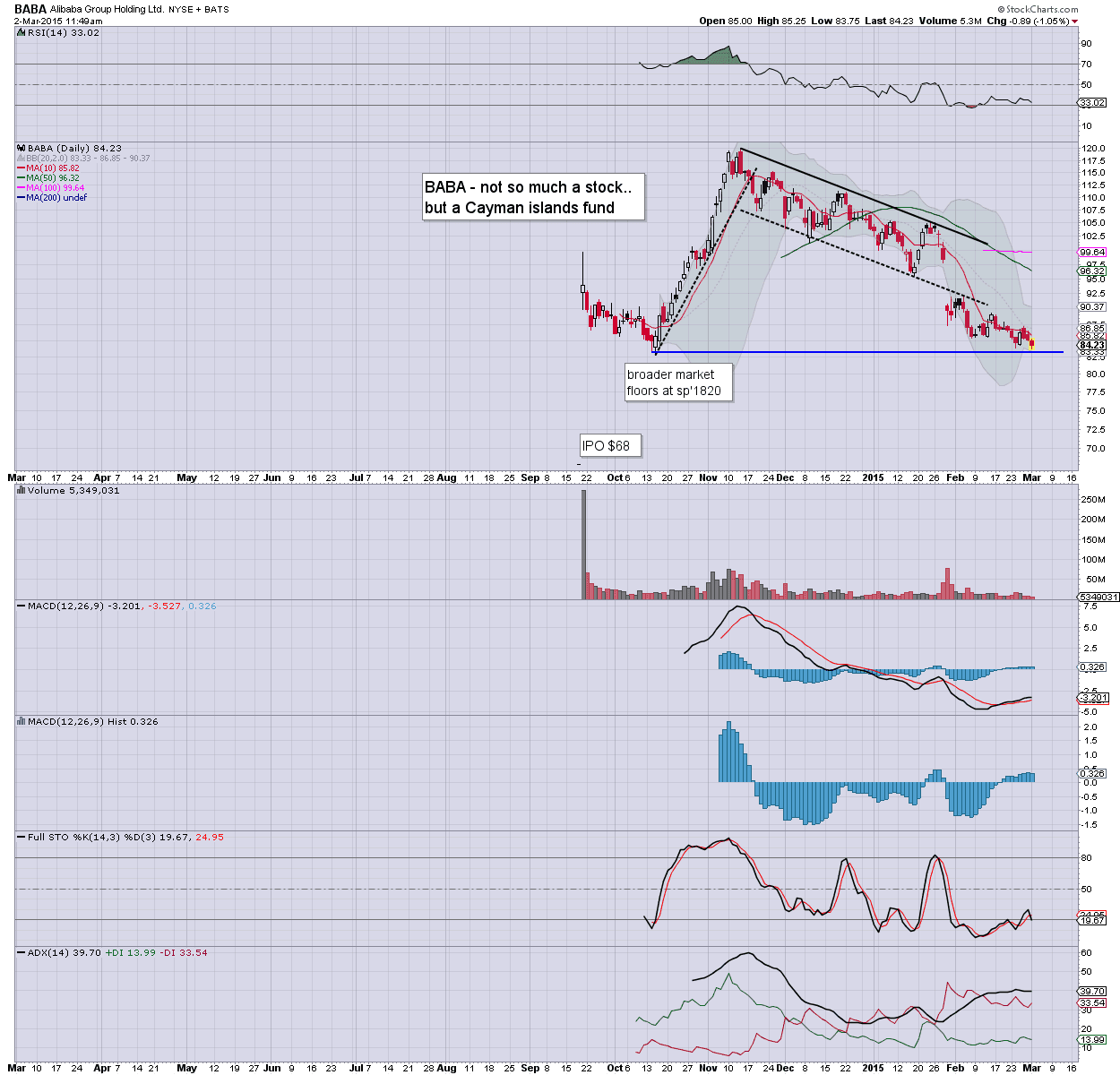 VIX 13.50s.... 14 remains the key threshold to watch for this afternoon.
Posted by Trading Sunset at 16:50:00
Email ThisBlogThis!Share to TwitterShare to FacebookShare to Pinterest

11am update - everything is awesome

The Nasdaq Composite has re-taken the giant 5K threshold... and it only took fifteen years! Clearly, everything is fine again, as the market is reflecting the underlying strength in the economy*. Metals have naturally lost their earlier gains, and are already a little lower. Oil has swung higher, now +1.9% 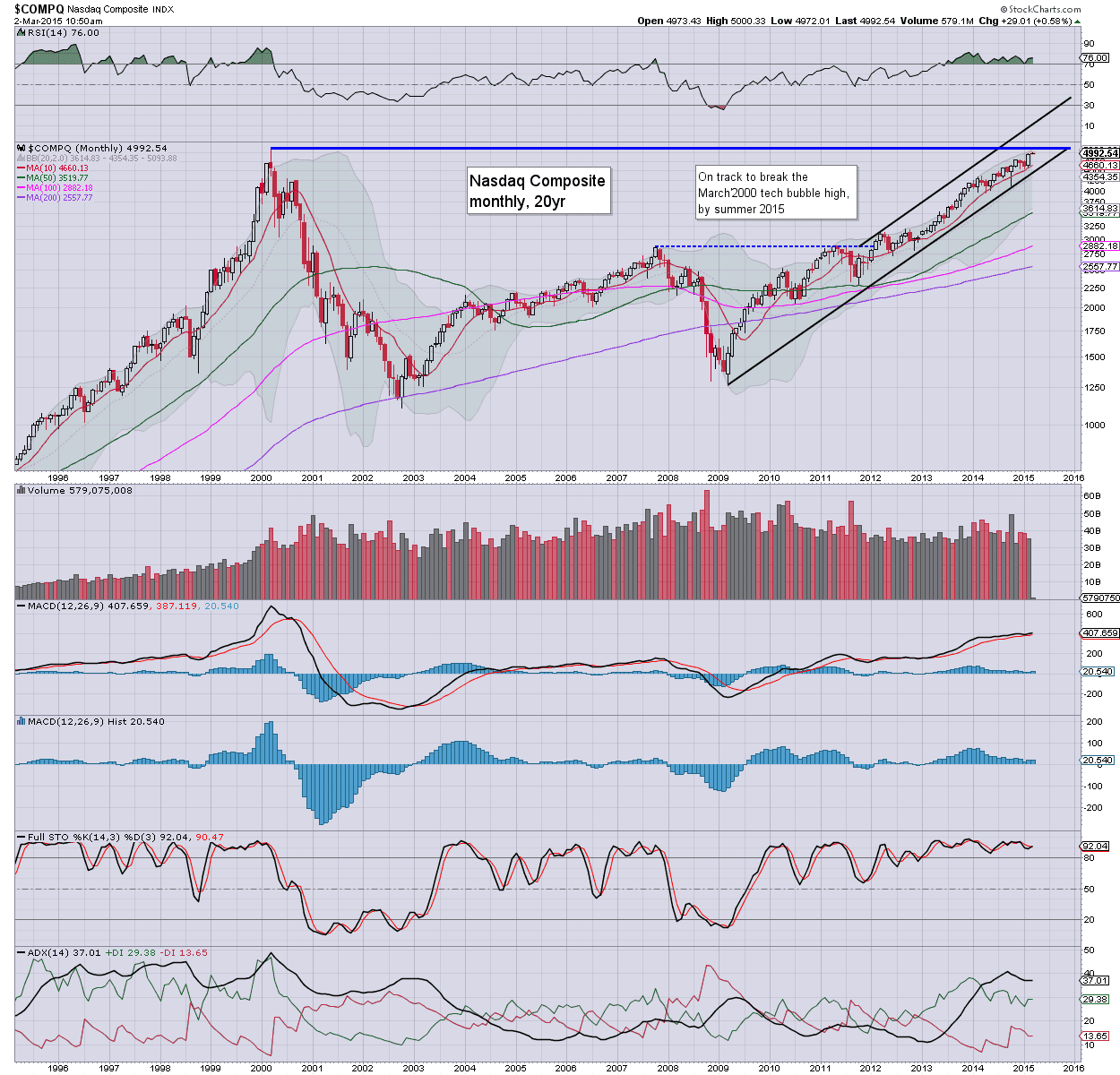 *in case you do not realise it... that opening was English sarcasm. In no way does this market reflect the reality, but then.. capital flows and fed policy are hugely over-riding natural price discovery
--


Equity bears need a daily close in the VIX above 14.0, to open the door to a minor equity retrace in the 2060s. 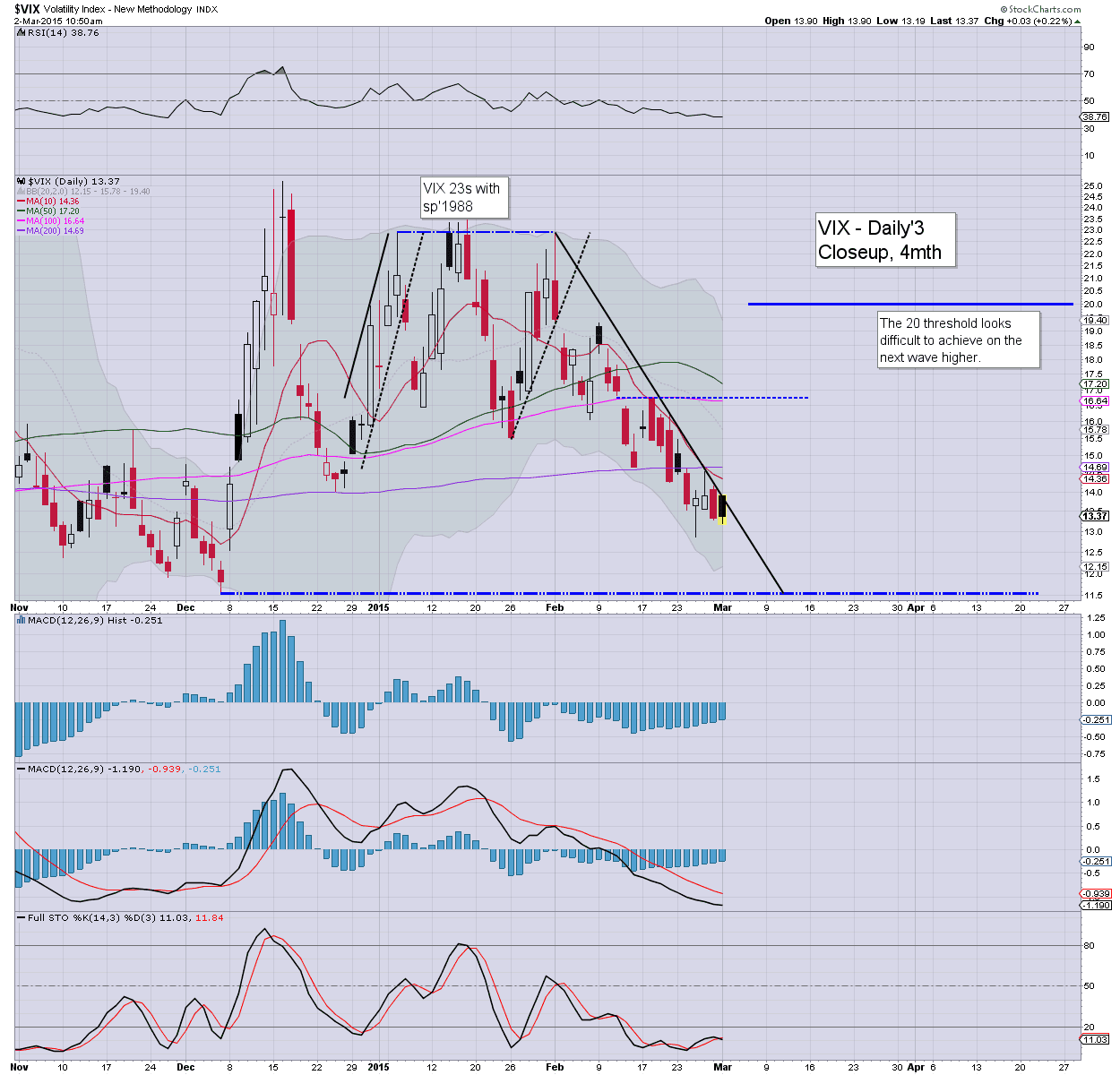 ...but right now, that might have to wait for another day or two.
-

time for an early lunch
Posted by Trading Sunset at 15:52:00
Email ThisBlogThis!Share to TwitterShare to FacebookShare to Pinterest

US equities open a little higher, but look increasingly vulnerable to turning red. The sp'2119 high will likely hold in the immediate term.. with a break under the sp'2100 threshold due. Metals are losing initial gains, Gold +$4.... a rough spring is ahead. 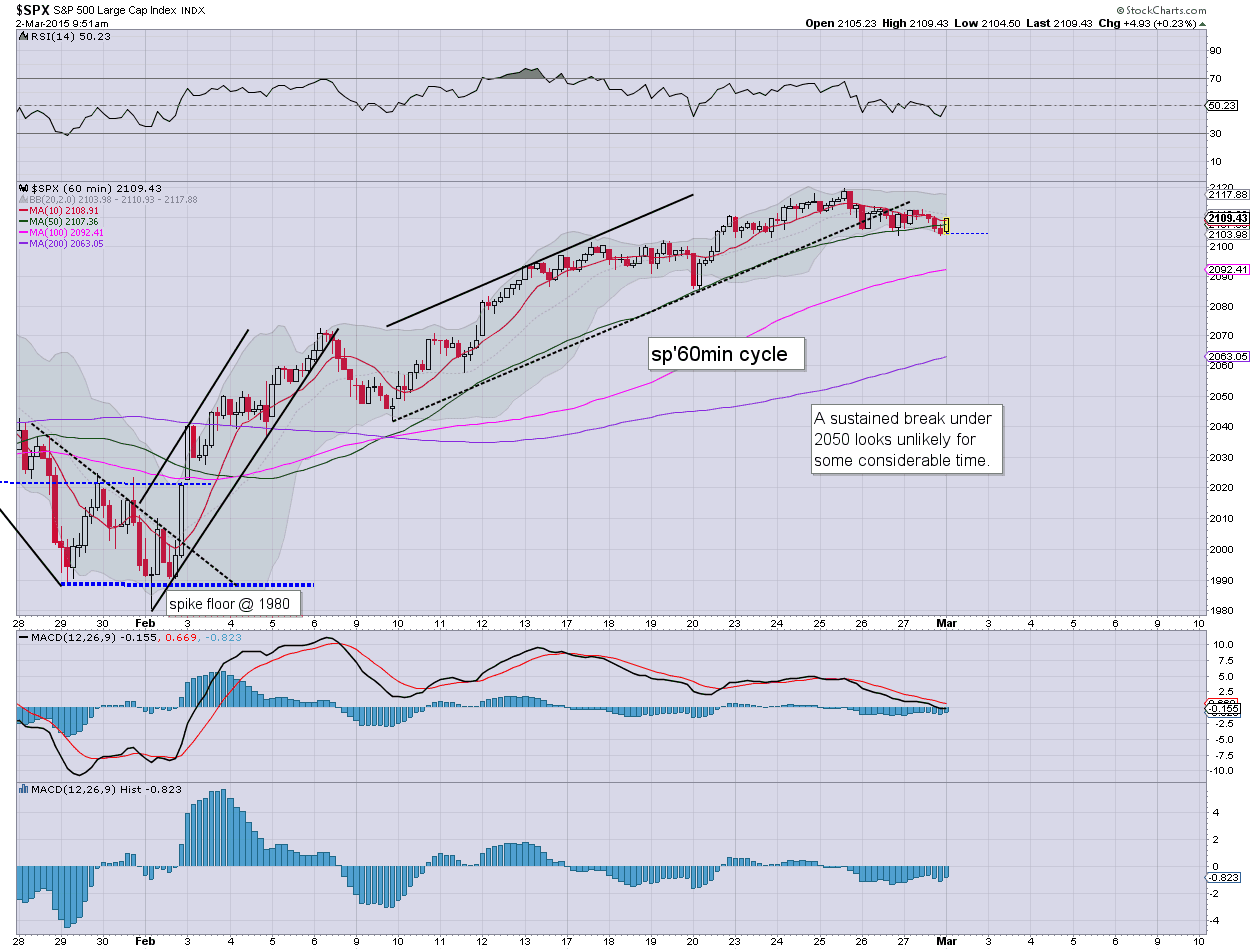 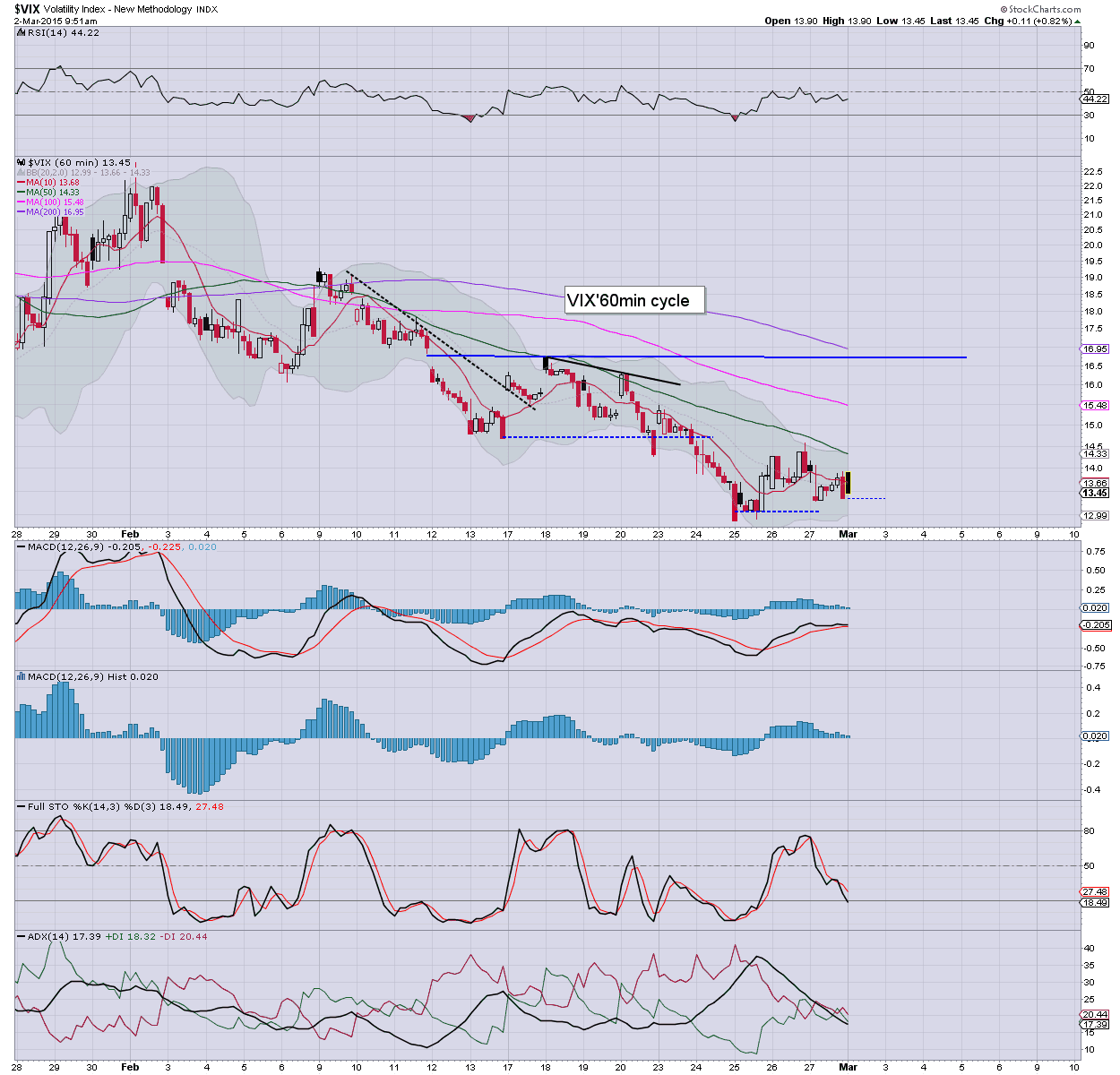 *opening black-fail candle on the VIX... not exactly inspiring for anyone on the short equity side.
--

So... opening gains, but a net daily decline looks very viable.. which (shockingly) would make for the 4th consecutive daily decline. Indeed though, ironic that 4 days of declines will still only make for a net decline of 1-1.5%.

A twisted market where all the old rules are reversed.... elevator UP.... and stair step down.

Ohh how everyone will be 'so surprised'.
Posted by Trading Sunset at 14:53:00
Email ThisBlogThis!Share to TwitterShare to FacebookShare to Pinterest 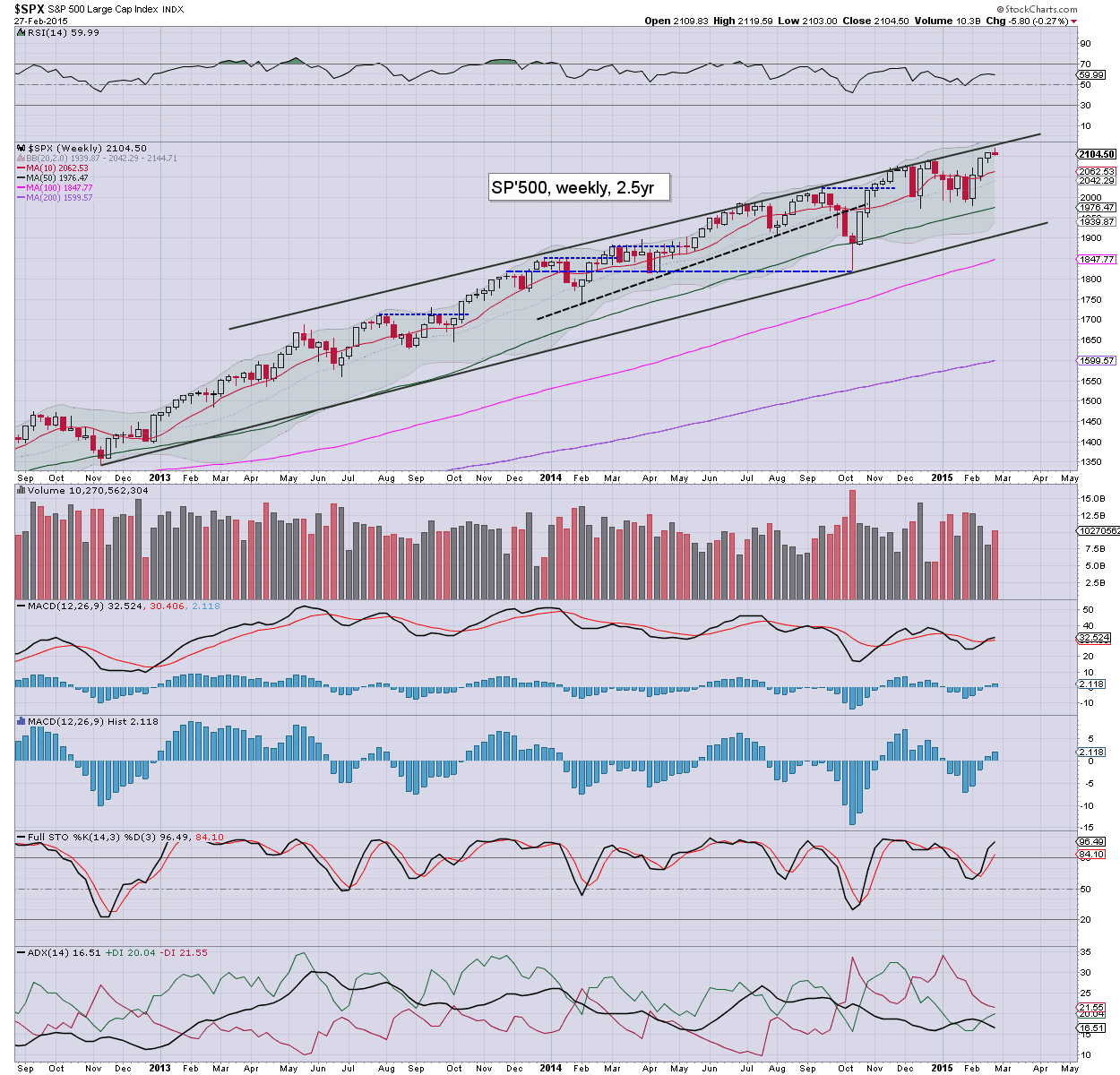 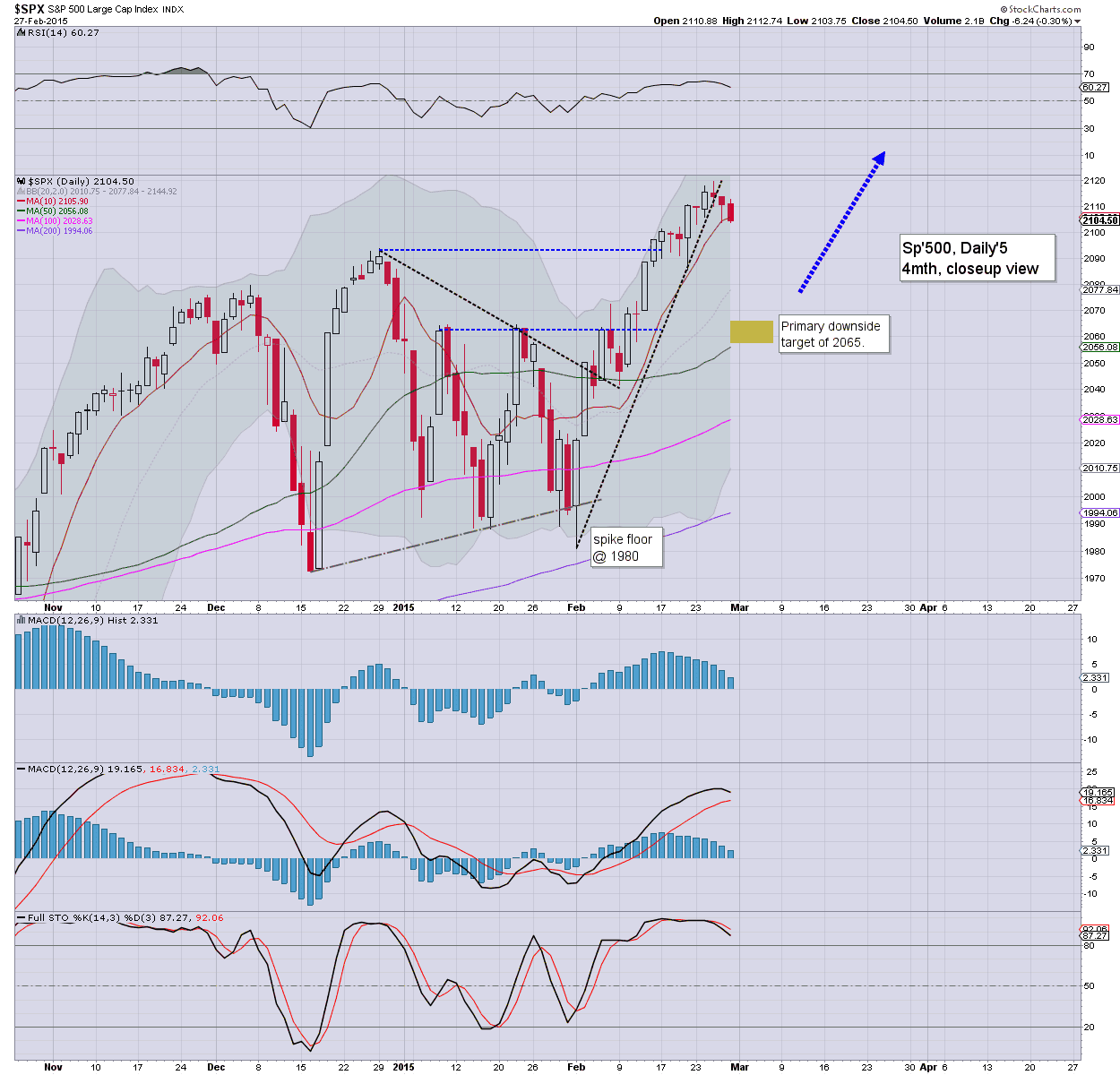 First, welcome to March. It is a marginally scary thought that we're already one sixth of the way through 2015.

So, we're set to open a little higher, but based on last the price action of last Thurs/Friday, the sp'2119 high should hold for the next week or two.

Primary downside target remains sp'2065.... where there are multiple aspects of support.

Update from RDL, who has an interesting longer term outlook

As ever.. the sp'2100 threshold remains key.... I'll be surprised if that doesn't break today.
Posted by Trading Sunset at 13:26:00
Email ThisBlogThis!Share to TwitterShare to FacebookShare to Pinterest
Newer Posts Older Posts Home
Subscribe to: Posts (Atom)