Whislt the main indexes were lower for much of the day, the VIX was surprising even more muted than normal. At best, the VIX was up 1% or so, but it closed down 3.7% @ 15.71. Considering its October, a VIX in the mid teens remains remarkable. 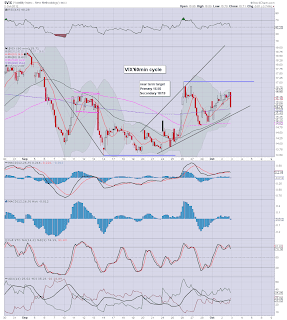 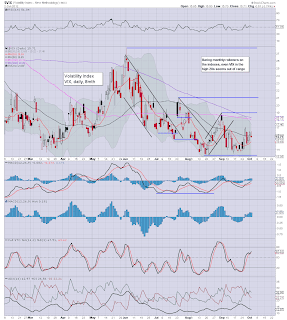 The last hour of trading saw the VIX get somewhat hammered lower.We're still in what is a pretty broad up trend/wedge, but its not a very strong one, and we could easily fail tomorrow, not least if the market again gaps higher.

It really is a situation of 'if no upset, then market will see relentless low-volume melt up'.

For the moment, Mr Market sees no imminent upset. Everything is on track for sp'1600 (at current trend rate) by year end. Today's style of VIX close was exactly the sort of thing that should make the permabulls very pleased.
Posted by Trading Sunset at 22:30:00
Email ThisBlogThis!Share to TwitterShare to FacebookShare to Pinterest

Arguably, a disappointing end to the day for the bears. It took most of the day to break below sp'1440, only for it to last barely an hour. With the VIX closing red, yeah, it was disappointing indeed. 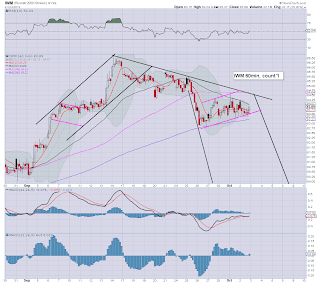 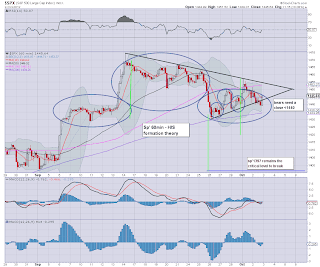 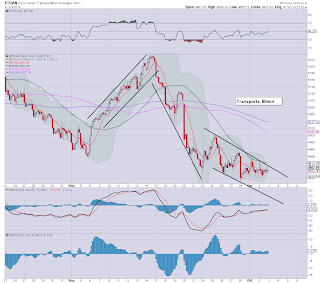 Well that wasn't much good of a day. From the bigger daily chart though (posted later), we just had day'5 of what is a bear flag.

Downside target remains 1420/15. The 50 day rising MA will likely pose strong resistance to any drop, assuming we get one later this week.

More later
Posted by Trading Sunset at 21:01:00
Email ThisBlogThis!Share to TwitterShare to FacebookShare to Pinterest

Bears achieve a minor break through the key sp'1440 level. So far though, downside momentum is very limited. There just isn't much to kick it any lower right now. 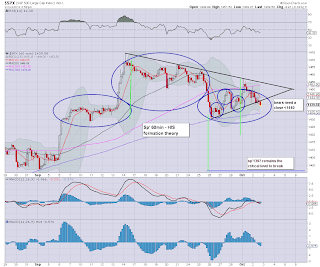 A close of 1435/33 is certainly viable, lets see if the bears can achieve a little victory to close the day.


VIX is +1%, but that is of course very marginal, only a close +4/6% would merit a little attention.

More after the close
Posted by Trading Sunset at 19:59:00
Email ThisBlogThis!Share to TwitterShare to FacebookShare to Pinterest

Its a bit of mixed mess right now, with some indexes green, some red, and the VIX fractionally red. 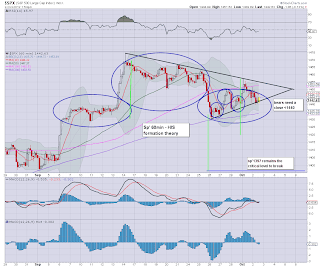 With two hours to go, lets see if we can finally puncture back through what is the key level of sp'1440.

A close as low as 1435/33 seems viable, if only a little downside momentum can start to kick in.

So, lets see what the bears got!

back at 3'
Posted by Trading Sunset at 18:56:00
Email ThisBlogThis!Share to TwitterShare to FacebookShare to Pinterest

Every time we rally up, its being sold into.No one wants to buy into the 1450s. 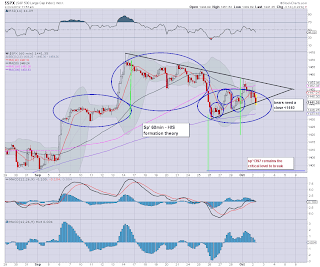 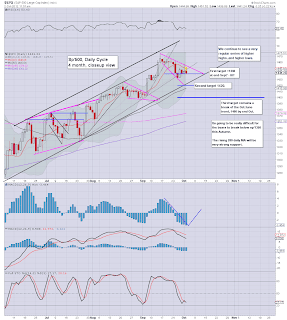 Considering the underlying MACD cycle, I'd be very cautious about holding below 1420/15. I just can't see 1400 being taken out for at least a few more weeks.

Seeking latter day weakness, a close <1435 would be a real bonus. Anything in the 1420s would be a major victory, and would confirm what is surely a bear flag.

time for lunch !
Posted by Trading Sunset at 16:55:00
Email ThisBlogThis!Share to TwitterShare to FacebookShare to Pinterest

Good morning. Well, here we go again. Opening moderate gains for the bulls. We're again trying to break up and out of the current cluster area of 1430/60.

VIX is 3% lower, but it is hard to make anything out of that move though. 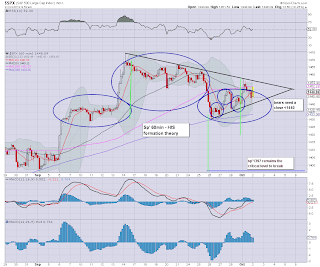 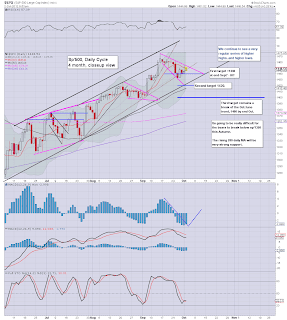 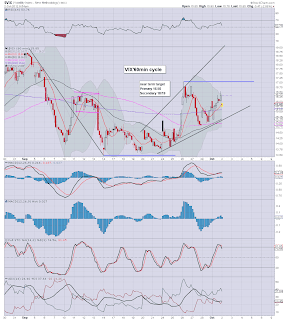 I'm certainly guessing we don't break to a new high yet, but that is certainly not something I am particularly confident of. The underlying daily MACD cycle is starting to tick higher, and even though the formation is now a 5 day bear flag, its still a little concerning.

Bears should seek weakness later in the day. A close under 1440 would be the aim for today.

back at 12pm
Posted by Trading Sunset at 14:56:00
Email ThisBlogThis!Share to TwitterShare to FacebookShare to Pinterest

Waiting for a blue...or red candle

Whilst the tranny was the first index to flash a red flag warning for this Autumn, the other main indexes are still outright bullish. The Sp'500 for instance is now sporting the third consecutive green candle on the Elder Impulse system. 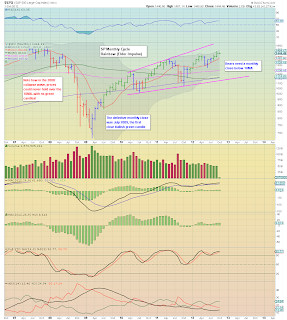 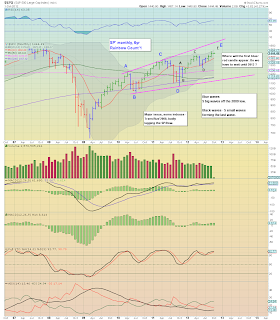 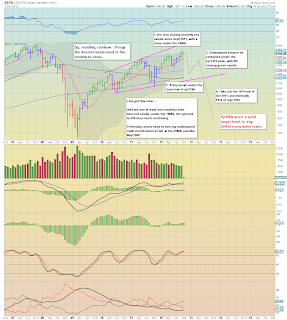 First, a brief reminder on the transports, which did indeed provide the first red flag of the year... 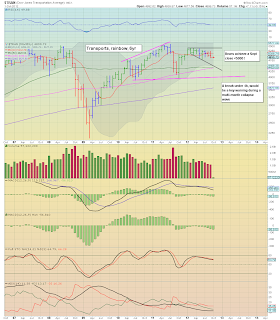 Key targets for the bears

Bears desperately need a monthly close back under the 10MA on the monthly. Right now, that is 1382, some 62pts lower, although that's only 4.5%. Its not exactly asking for a collapse, is it?

So, we have a long month ahead. The US election is a mere 5 weeks away, the 'fiscal cliff' is looming, and Europe is imploding. But hey, what else is new?

The VIX daily cycle certainly offers upside to 18/19, but the bears need a daily index close <sp'1440. Until then, the bear flag apparent on the daily index cycle looks likely to just add another day.

I remain short, seeking an exit somewhere around sp'1420/00, later this week.

A bit of a mixed day, the opening gains levelled out by midday, and then it was merely a case of seeing what the bulls could cling on to. There are now clear bear flags on most of the daily index charts, and they are suggestive of a move to around 1420/00 in the coming 3-5 trading days. 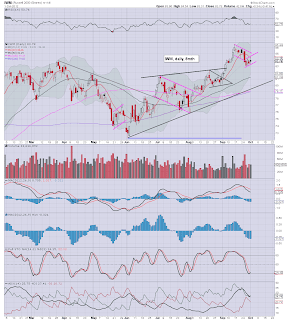 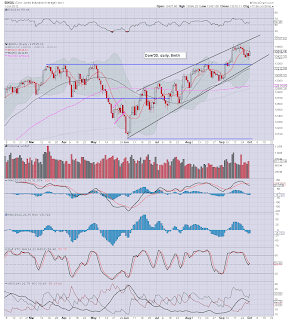 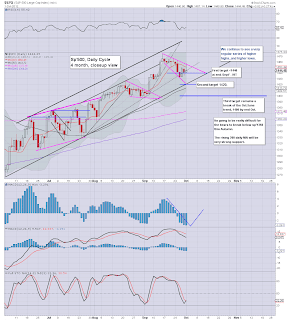 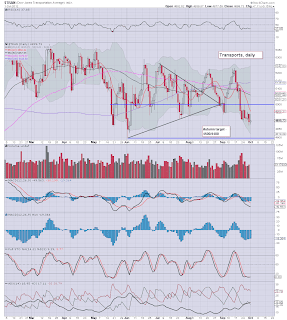 A day when both sides could claim some sort of a minor victory. The bulls clawed a little higher (well, aside from the tech sector), but the bears certainly took over in the late afternoon.

The underlying MACD (blue bar histogram) cycle is very low, so its going to remain very difficult for the bears to see any decent one day falls.

What is most apparent, we do have some interesting bear flags. If we can break back under sp'1440, then the door opens up to a multi-day move to either 1420 or 1400. All things considered, a break under the important recent low of 1397 still seems very unlikely.