With the indexes slipping consistently lower across the day, the VIX has begun a new up cycle. The VIX closed +11% @ 14.21  Near term trend looks bullish, although a brief drop to the mid 13s is viable Thursday. VIX 20s look increasingly very likely this month. 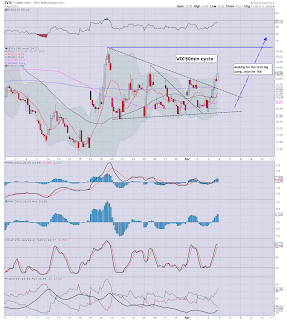 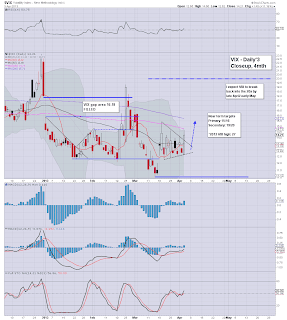 We saw a touch of the upper bollinger band on the daily chart in the 14.60s, before that closing hour index action cool the VIX down a little.

The daily 10MA will offer primary support - that is now in the 13.30s..and should be turning upward tomorrow..and start to soar by the Friday close.

The market appears to have completed a 5 wave decline from the 1573 Tuesday high. The only issue is whether today was the first wave lower, or if there is still one last spike high to test 1576. What is clear though, the bulls are losing control of the market. 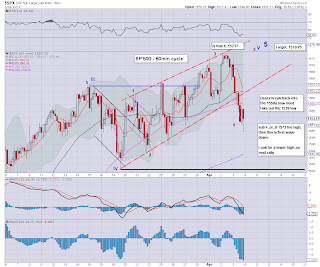 When you look at the 5min chart, you could count down a 5 wave series from the recent 1573 high. I'd not noticed it until just earlier, but then...'everything is clearer in retrospect'..right? 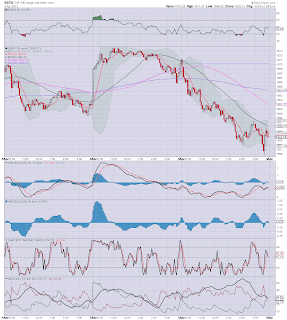 Its impossible to know whether today's action was a sub wave'4, but the bigger cycles are clear now...we're headed broadly lower across April/May.

The usual bits and pieces..later.
Posted by Trading Sunset at 21:01:00
Email ThisBlogThis!Share to TwitterShare to FacebookShare to Pinterest

It sure looks like the market has floored on the hourly charts. There is a viable 3-6 hours higher..and it remains possible the 1576 high will be tested...at which point I expect a severe intra-day reversal. VIX is higher..but starting to cool off a bit. Oil has conclusively broken. 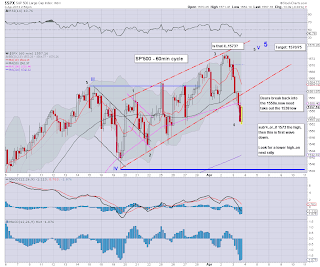 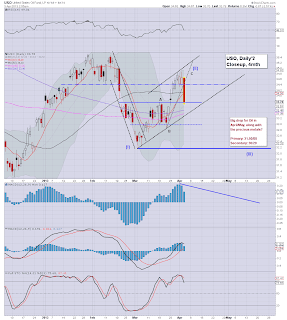 Regardless of the next day or two..it now seems absolutely clear...the up wave from November is concluding.

Bears..can start to look forward to some tradable down cycles.

*I will hold NO positions overnight..and wait to short the next bounce tomorrow..or early Friday.
--

Hmm, market looking weak again. No seems to want to buy into the close.

*bloomberg TV fire alarm...or perhaps the alarm when the market might close red ?

Mr Market has fallen 20pts from the recent high..and its getting increasingly difficult to imagine we'll see one final spike higher. Yet..it IS possible. On any basis, the hourly charts are low, and bears need to be mindful of a late day recovery. VIX is higher..but still lurks in the lowly 13s. 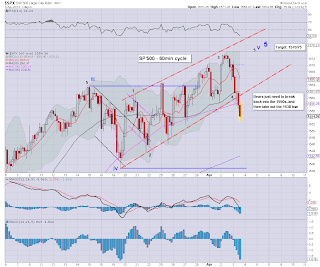 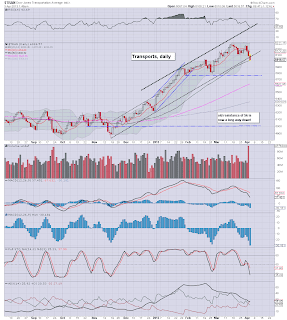 I've not mentioned it yet today, but the Transports is now the second index to break key rising support - in addition to the Rus'2000.

So, that's two indexes, and I've now zero doubt the others will follow.
--

For the bears, its now just a case of catching the top of the next up cycle..for what is arguably an easy ride down to the 1540/30s.

--
I am now waiting to launch a heavy index short...but not today. 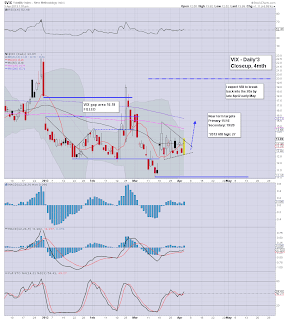 VIX is trying to bust upward..but if the indexes are floored - and they sure might be..then we'll see another pullback, but maybe another higher low. 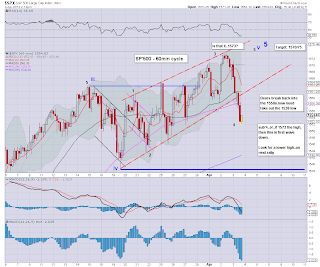 Market remains weak, and so far..no sign of any bounce. Smaller cycles though are pretty low, and an up cycle into early Thursday looks more likely than not. VIX is +5%, but a considerable way from breaking into the important 15s.  Oil remains particularly weak. 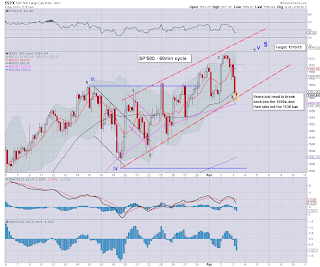 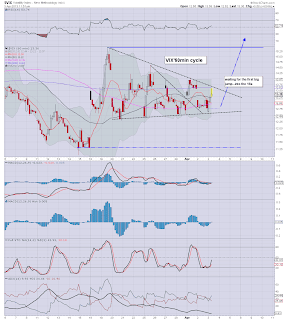 Market remains weak, but there are tiny signs we have floored in the sp'1559s. VIX could still close a touch red, but that will merely make it even better level for the bears.

--
USO kept on falling after I exited earlier..oh well.. a gain is still a gain. 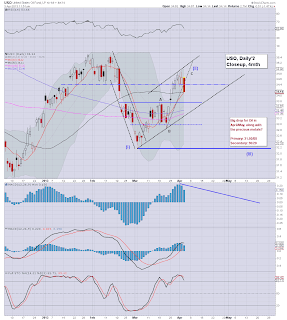 There will be plenty more down cycles to catch in Oil in the days ahead. Its a fair way to the 31s.
---

Best guess..we still make another play for the 1576 high.

I am merely going to watch this into the close. Lets see where we are later this afternoon.

Bulls starting to struggle. Yet..on any basis, the hourly cycle is low, don't be surprised if this nonsense swings higher into the close. I sure wouldn't be long, but I sure won't be short right now either. 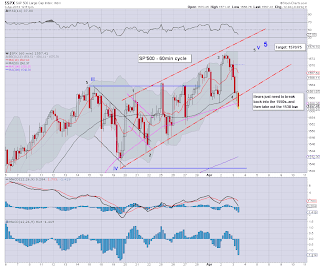 RE: a poster asked..about SLV.

I bailed on that mess yesterday. After giving it two full days, there simply aren't any buyers out there anymore - as there were in the previous 5 weeks.

SLV now looks doomed for the 22/20 area..if not even the teens. It might be a valid short on the next bounce, but there is no sign of that right now.
--
*If you comment other than Disque, it won't show up..get a disque account poster!

--
back at 2pm
Posted by Trading Sunset at 16:54:00
Email ThisBlogThis!Share to TwitterShare to FacebookShare to Pinterest

The market is moderately lower, but as ever...there remains the threat of a test of the 1576 high. A break into the 1550s though, would make it rather difficult though for the bulls. VIX is a little higher..but so far..nothing significant. Oil is lower..after the weekly report. 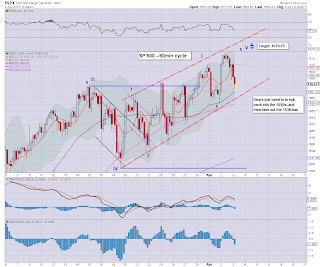 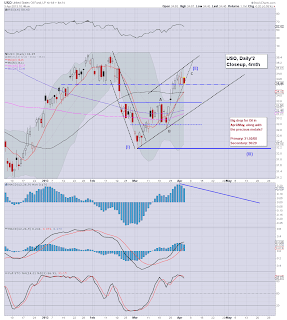 Regardless, the weakness is building out there..as many chartists recognising.

*I exited USO (short) just earlier...will look to re-short it..later today..maybe again in the 34.60/70s.
--
I will also look to pick up an index short block..or a VIX call block.
--
Posted by Trading Sunset at 15:51:00
Email ThisBlogThis!Share to TwitterShare to FacebookShare to Pinterest

Good morning. The market looks weak. With the ADP jobs data coming in somewhat lousy, there is amply excuse for a down cycle across the morning. Oil is starting to slide, and the precious metals are still utterly failing to show any dead count bounce. VIX looks..primed. 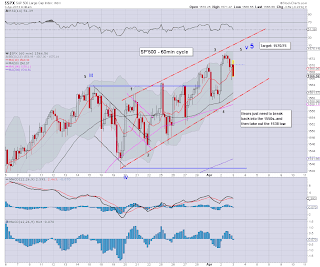 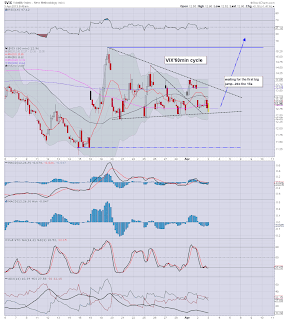 *its amusing to see lead clown man 'Pisani' on CNBC ask the question 'is the rally in trouble'.

I can only imagine the disturbed and concerned comments we'll see when sp' breaks back below 1500. They'll be begging the Bernanke for QE to continue at least into 2014.

The annoying thing is...they'll likely get their wish.
--

Posted by Trading Sunset at 14:49:00
Email ThisBlogThis!Share to TwitterShare to FacebookShare to Pinterest

Despite the headline indexes - SP, Dow, Nas, all closing higher, the two indexes which lead the market up... are rolling over, and breaking key rising support. It would seem very likely those more media-focused indexes will follow the Trans and Rus'2000 lower in the days ahead. 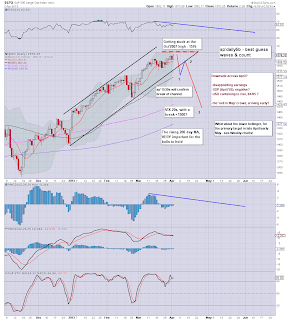 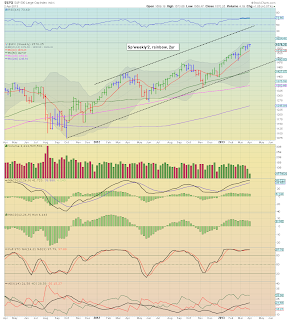 As detailed in the first chart, is my 'best guess' for the near term. I continue to believe we are putting in a choppy top. A break into the sp'1530s should be enough to confirm what is already happening in the Trans and R2K.

It will also likely be enough to break the key rising support/channel, on the main indexes, and confirm that the big rally from the November low of sp'1343 is...complete.
--

Indeed, despite today's higher highs, the rainbow weekly chart is still sporting a blue candle, the bulls are unlikely to see any green ones for some considerable time! Also, note the MACD (green bar histogram) cycle, which is still rolling over rather nicely. 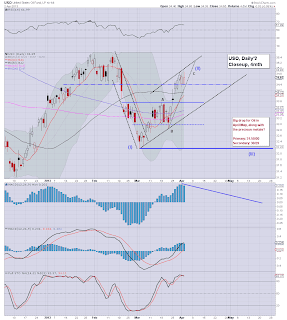 I am seeking a first exit in the low 34s, but primary target is the 31s late April/early May. Wednesday sees the usual EIA (oil) report at 10.30am, and the morning action could be somewhat mixed.

We have the ADP jobs data in pre-market. I suppose that might be enough to kick the market another 0.5% higher, but I would just think that makes for an even better re-short level for the bears. We also have ISM data at 10am, which might be enough to upset the market..or at least cut down any opening gap up.

I'm calling it, this multi-month up cycle is about done.

Biderman again notes the issue of the tax year ending next week, which indeed..could lead to some extra sell side volume. We shall see.
Posted by Trading Sunset at 04:00:00
Email ThisBlogThis!Share to TwitterShare to FacebookShare to Pinterest

The US indexes again closed very mixed. The SP and Dow closed moderately higher, but for the second consecutive day, the Trans and Rus'2000 saw notable declines of 0.6 and 1.2% respectively. The R2K is now below key rising support, Trans looks set to break it next. 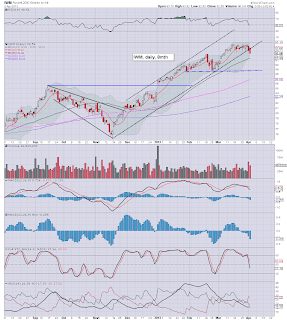 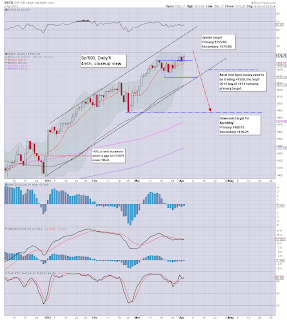 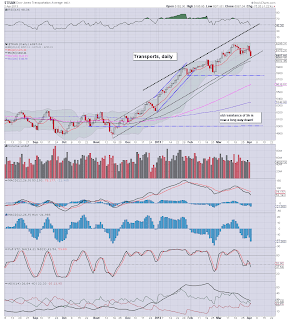 So, the headline SP/Dow indexes closed a little higher, but again the two market leaders - Trans/R2K closed red. This is surely the key issue so far this week.

The R2K especially looks like its in the very early stage of what I believe will be a multi-week down cycle. First soft support for IWM is the 50 day MA in the 91.40s, that's another 1.2% lower.
--

SP' needs to take out the previous low of 1538 to arguably confirm that the bigger cycle from the November low of 1343 is indeed complete.
--

We could still chop around for another week or two, but I have to believe...we're about done in this multi-month up cycle. Now its just a matter of trading the waves lower across April and May.