It is again time for a grand overview of ten of the world indexes. For those looking for the very best perspective on the state of the world equity markets...here it comes.... 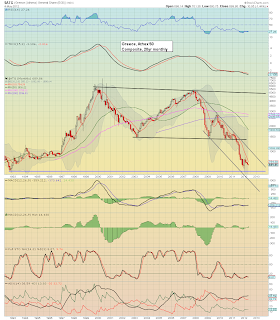 The horror of the Greek market, nothing to add here...the picture says it all. 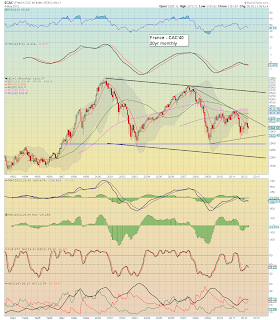 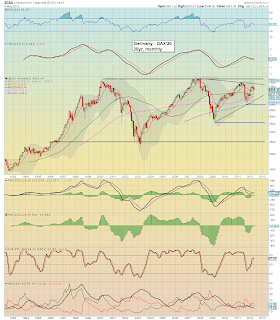 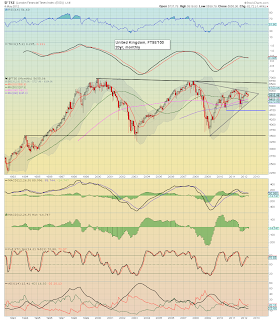 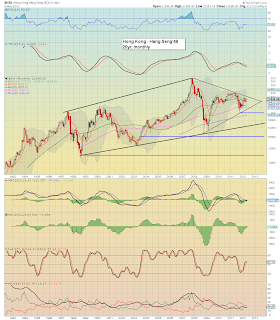 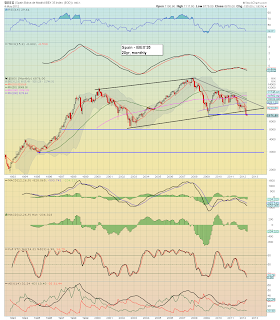 The Spanish train wreck continues. Lets be clear, the Spanish market has been in crash mode since the February peak. The IBEX saw a classic fail at the 10MA, next key support is at 5000. That is a good 1800pts lower, around 25%. I would safely assume that if the Spanish economic depression is not soon reversed, the IBEX will eventually break the 5k level, and go the way of the Greek index, breaking 3k..and eventually sub'1000. An outright deflationary collapse. 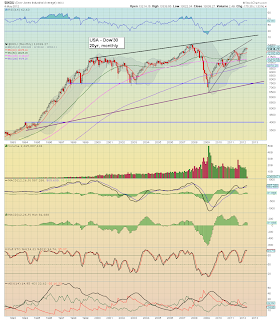 A break of 10400 (October 2011 low), would be the first major warning of a deflationary collapse. Of course, that is almost 3000pts lower from the Tuesday peak. This is one reason why such warning levels are arguably useless from a practical point of view for the long term investor. A warning that only triggers after a 25% market decline...no, there is not much use in that.

The 'big money bears' will have stops at the recent 13338 Tuesday peak. For those using good short-stops, it really is a very clear trade right now. 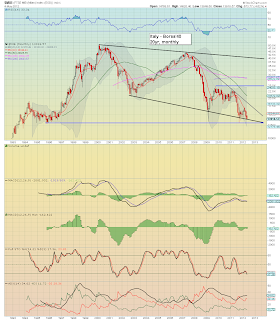 Like the Spanish market, Italy is now about to confirm it is moving into a crash mode. Of course, the market is already down 60% from the high, it has not exactly been a great place for the retail investor since the 2000 and 2007 peaks.

A break of 13k opens the door to a huge 30% further downside. There really isn't any clear levels under 10k, but that's a long way down, there is no need to be concerned with that right now. 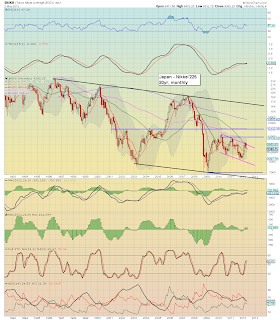 The nation of the deflationary collapse, peaked in March - after appearing to show an initial sign of a breakout to the upside. Instead, we now have a wave lower underway, first key level is the 10MA of 9100, and then the double low of 8200/8100. A break under 8000 opens up a fall to 7k. I'm unaware of what key levels under that are, although the big 5k would obviously be one.

The MACD (green bar histogram) cycle is now flat, and even a further small fall across May and into June would confirm a summer rollover. 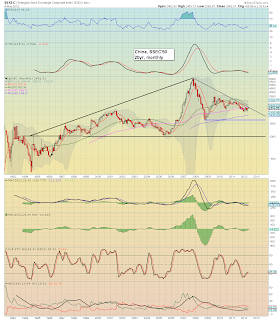 Lastly, a look at China, which is possibly the most interesting of all the world indexes. China is sitting at the very border of either a major fail, or a major breakout. Which will it be this summer? A fail..would likely take the SSEC to the 1700 level - a fall of 25% from current levels. A fail at 1700...opens the door to a further 700pt to the ultimate psy' level of 1000. In my many  years of following the world economy, I've yet to see a 'soft landing'. I'd guess if China were a plane, right now might be a good time to be putting on the parachute and preparing to bail from 2452ft. Its a far safer height than trying to exit at 1000 !

I've tried (really!) to be fair in this brief assessment. We have 3 EU indexes already in a mess, with 3 further EU markets rolling over - along with Japan. If both USA and China show weakness in the coming weeks, we could see them put in confirmation rollover candles by late June. Hong Kong, is literally an island unto itself, perhaps it can merely hold level, whilst the others start unravelling?


Looking ahead, the rest of May, and into June/July

If the Bernanke -and other central bankers want to halt this new decline, they better step in with new QE immediately! However, as I said to another trader this week, the Federal Reserve has never been pre-emptive in its actions. It has always been reactionary, and I'd cite QE1, 2, and op-twist as support for that view.

I have to believe the Bernanke will again be reactionary, and wait for Sp'1150/00 in the coming few months, before he feels the justification - and has the overall political/media/Federal Reserve board support, for a further dose of insane money printing to kick asset prices back upward.
Posted by Trading Sunset at 23:00:00
Email ThisBlogThis!Share to TwitterShare to FacebookShare to Pinterest

It was another pretty crazy week in the market. First, I think its important to remember where we were last weekend. We had seen a bullish engulfing candle on most of the indexes, and the outlook was therefore bullish! What did we next see? Monday saw an early morning decline, but Tuesday saw another strong morning gap up in the market, and the Dow made a new 4 year high. At that moment, the entire bear case was completely blown out. There was nothing bearish, and much of the 'serious money' by the bears would have been stopped out.

Yet the Dow was indeed the only index to make a new high. By the end of Tuesday I had a theory we were putting in a new mini H/S...and that indeed panned out! It is not often I spot them myself, so that was the real highlight of my trading week :) 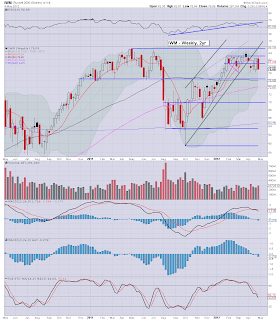 A fail at the 83 line, that is THREE months of fail. This is pretty astounding, and is now the second most bearish index I can find (The transports remain the weakest sector). First downside target remains 76, a break of 75 would opens up 70 (equating to sp'1270/50) 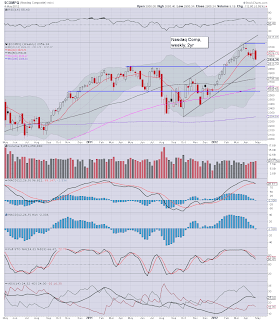 The action in the NASDAQ looks like a mirror of July 2011. Now, I'm not saying we are about to see a giant collapse next week, but the pattern IS the same. First target remains 2875...if fail, then 2600. 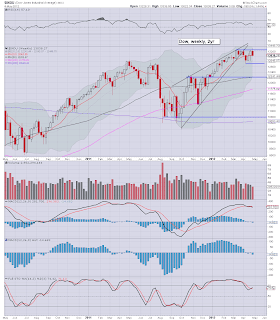 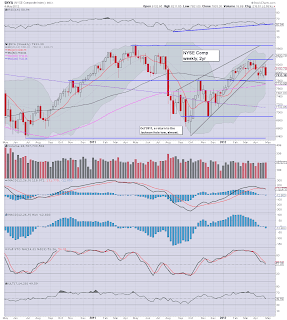 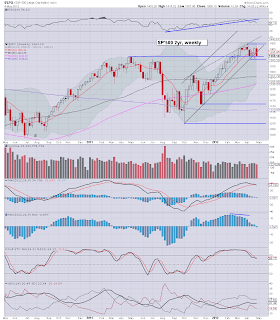 One thing is clear, a break of the recent low of 1357..will trigger a LOT of bull stop-losses, that is where we could see some really big down moves occur, with further stops at 1340. 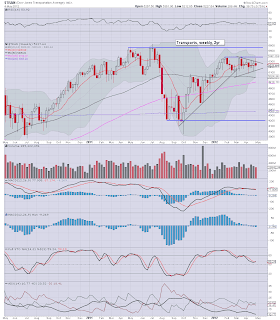 What appeared to be a bullish pennant last weekend on the Transports did indeed break to the upside, with 1% gains on both Monday and Tuesday. Yet...the Tranny could not hold! It is now putting in a VERY dangerous spiky/fail candle. First target now would be a break under the pennant, with a quick move to the big 5000 level.

A break under 5000...and the doomsters will have a major victory, next target would then be 4500 (as determined via the monthly cycle)

This market sure is a tough one to discern. In the space of just a week, we've moved from a bullish outlook - on good evidence - which WAS even confirmed on Tuesday (when the Dow made a new 4 yr high), but the market could not hold the gains.

The close on Friday was especially weak, and we will most likely see some very significant falls in the coming week.

--
Still to come this weekend....the '10 world indexes, monthly update'..and they are massively important for what may pan out across the next 3-6 months.