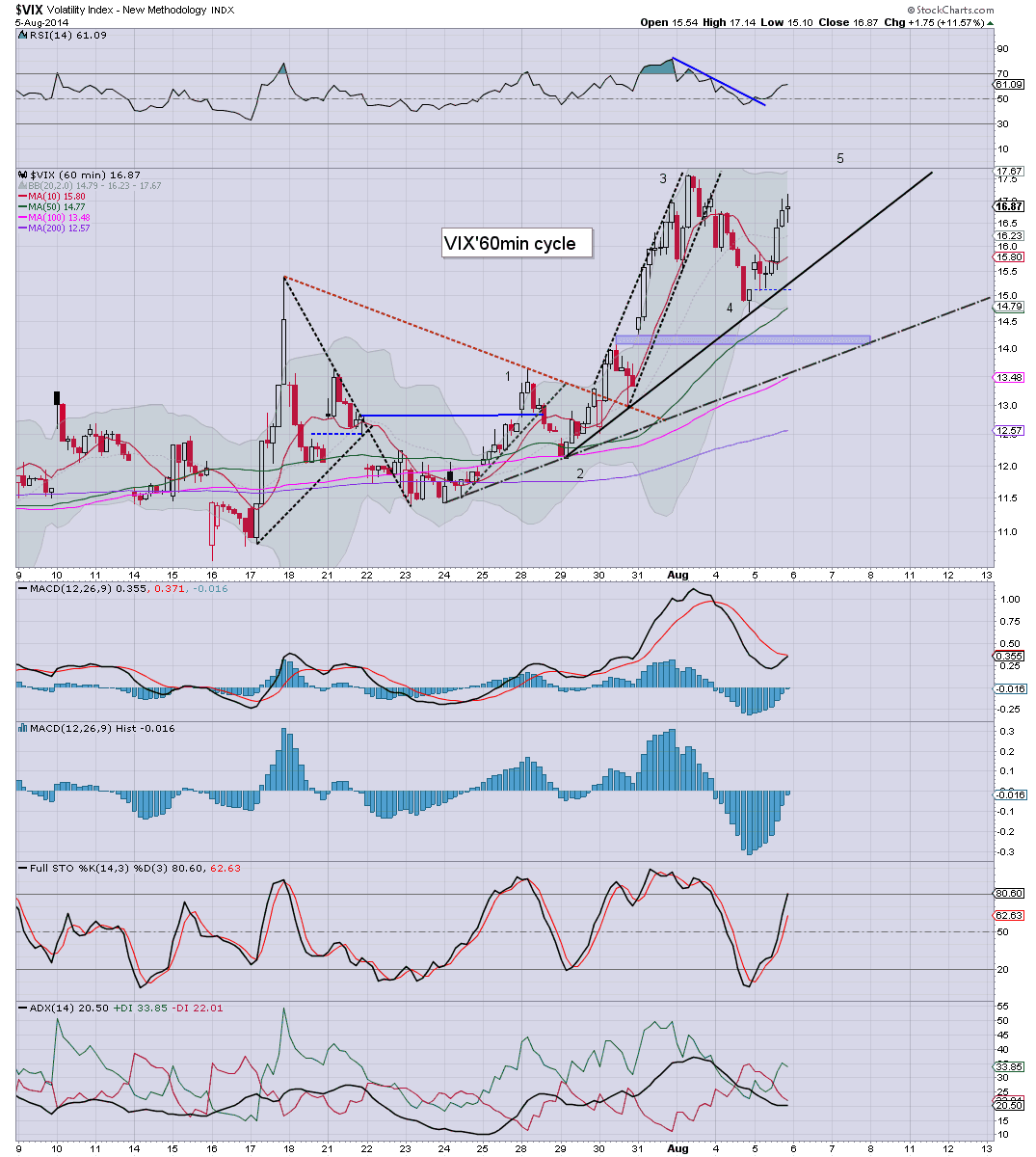 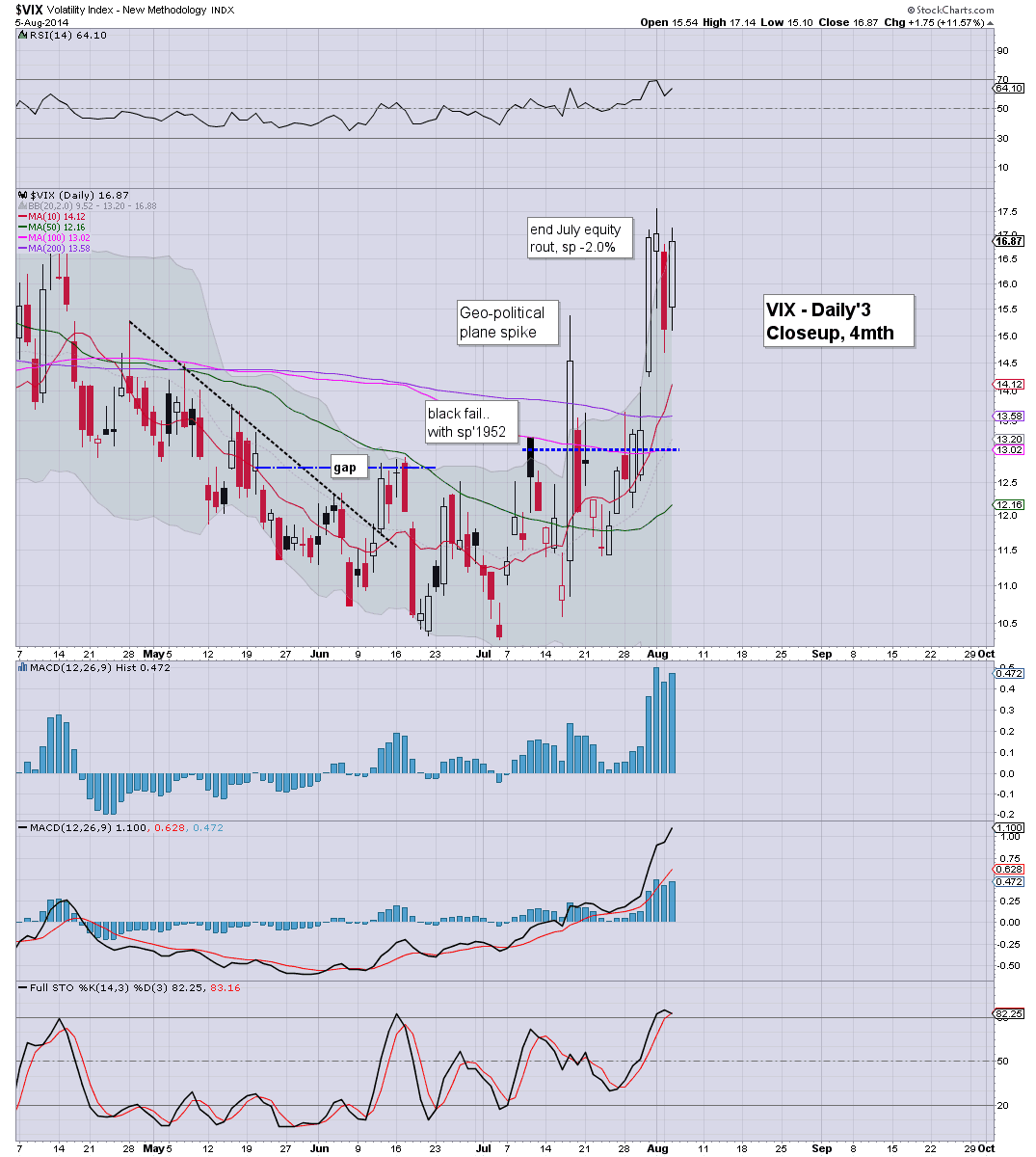 Suffice to say... we have a reasonable 5 wave climb in the VIX.. almost complete.

Best guess... Wed' morning, equities see a key floor... with the VIX similarly maxing out.. somewhere in the 17s. 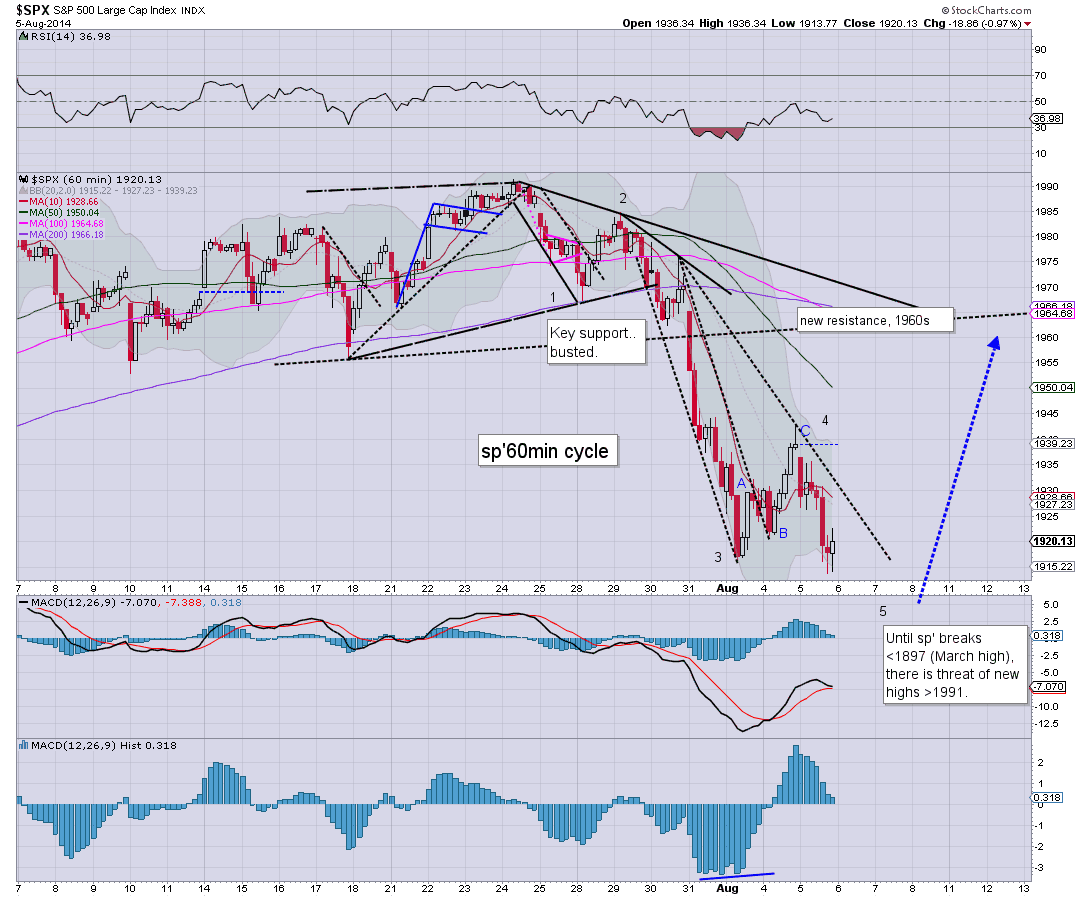 Today's declines certainly woke up many who have been absent since the weekend.

The daily close in the R2K is kinda interesting... bodes for a bigger turn.. UP in the market.

--
*I'll look to pick up an index-long tomorrow morning.. 11am would be a typical time for a reasonable low. 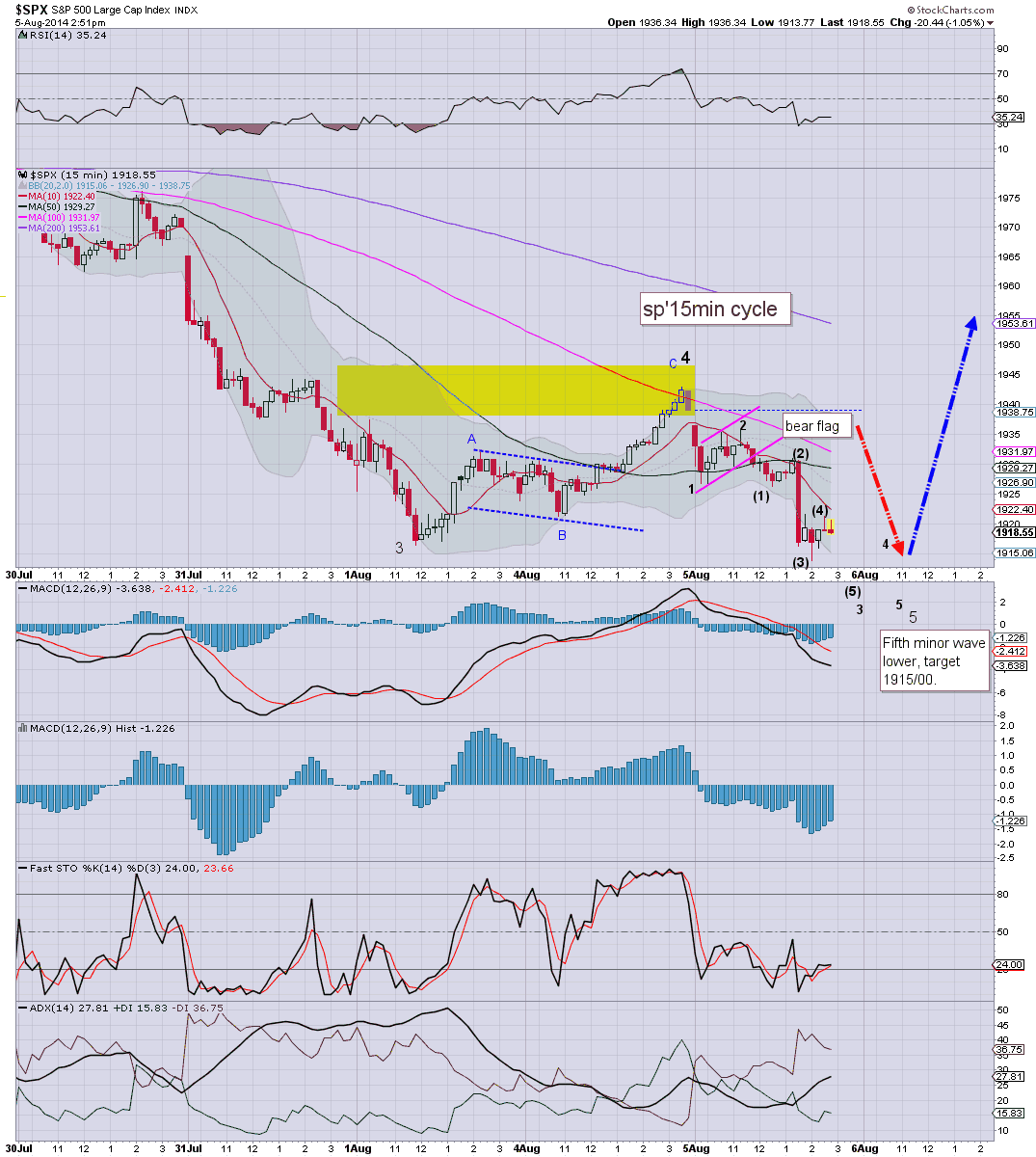 If my nano scale count is right..we'll see another new low broken into the close...

*special note... equity bears need to be especially careful if the Dow breaks the 200 dma. It did it before in early February... and we remember how that ended..yes?


3.10pm.. VIX still notably below the recent high...something I really would like to see hold. 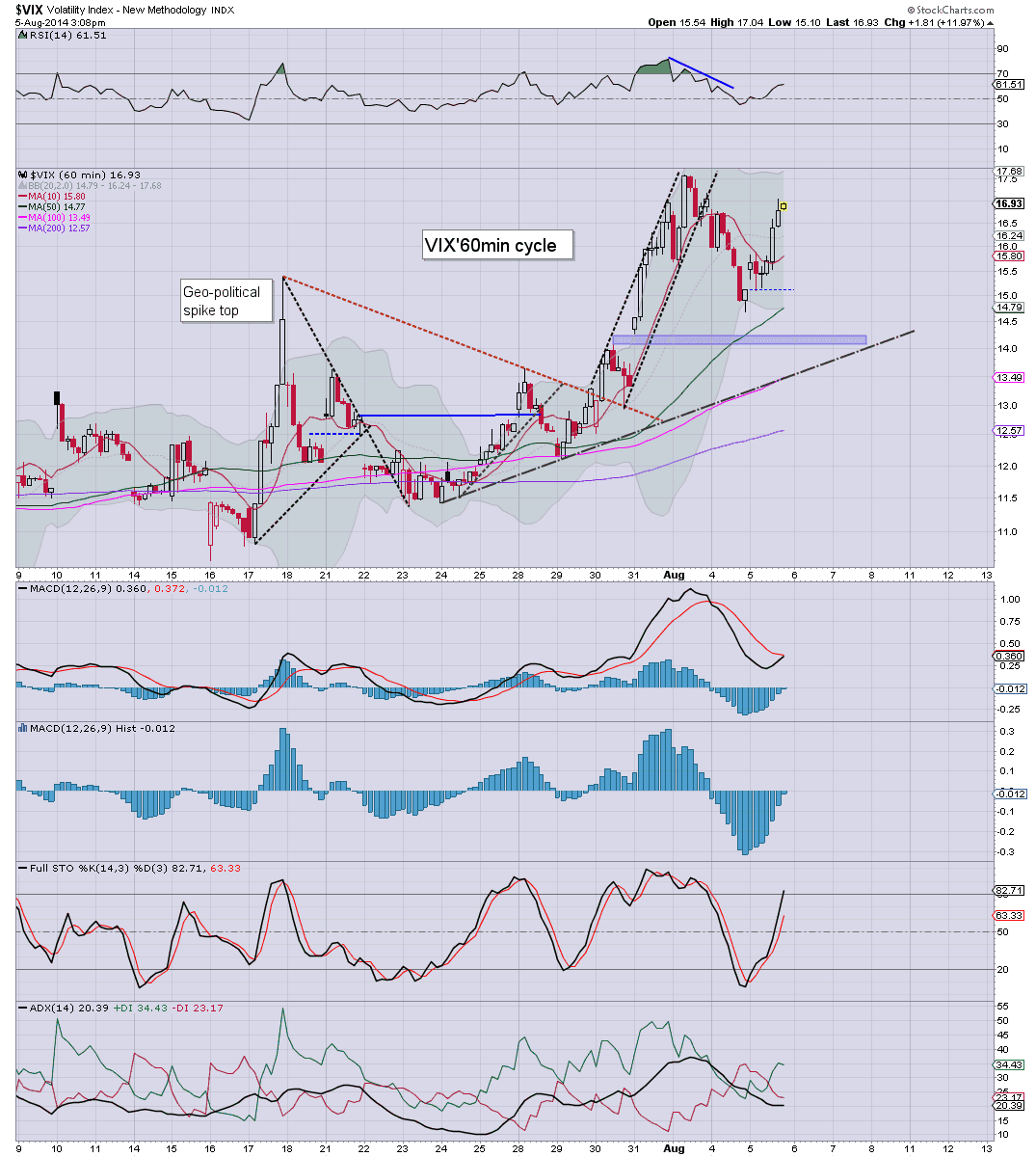 Certainly...a fair few have finally woken up with this afternoons further declines.

3.42pm  minor chop.... a day for the bears... with VIX +10%
Posted by Trading Sunset at 19:52:00
Email ThisBlogThis!Share to TwitterShare to FacebookShare to Pinterest 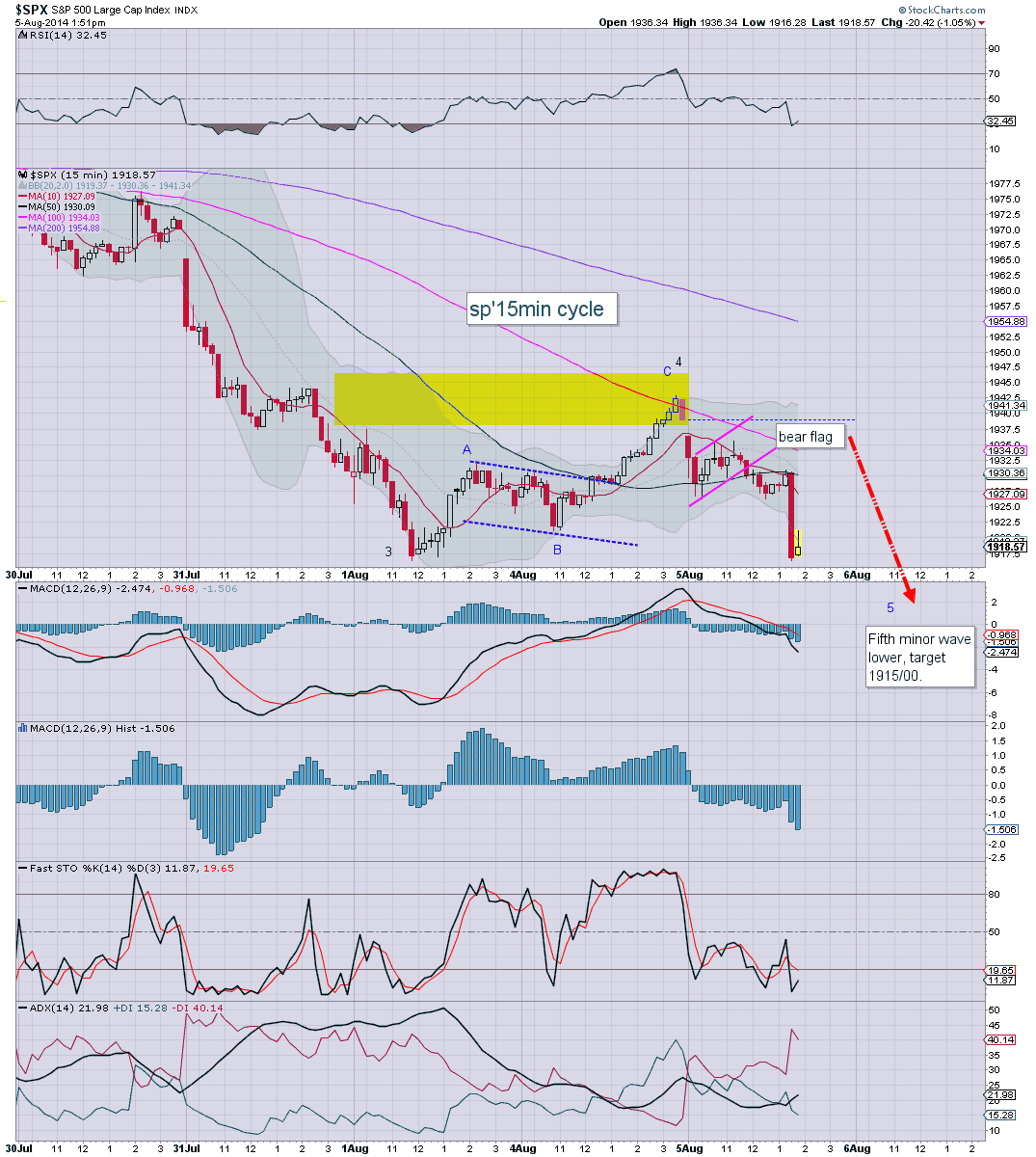 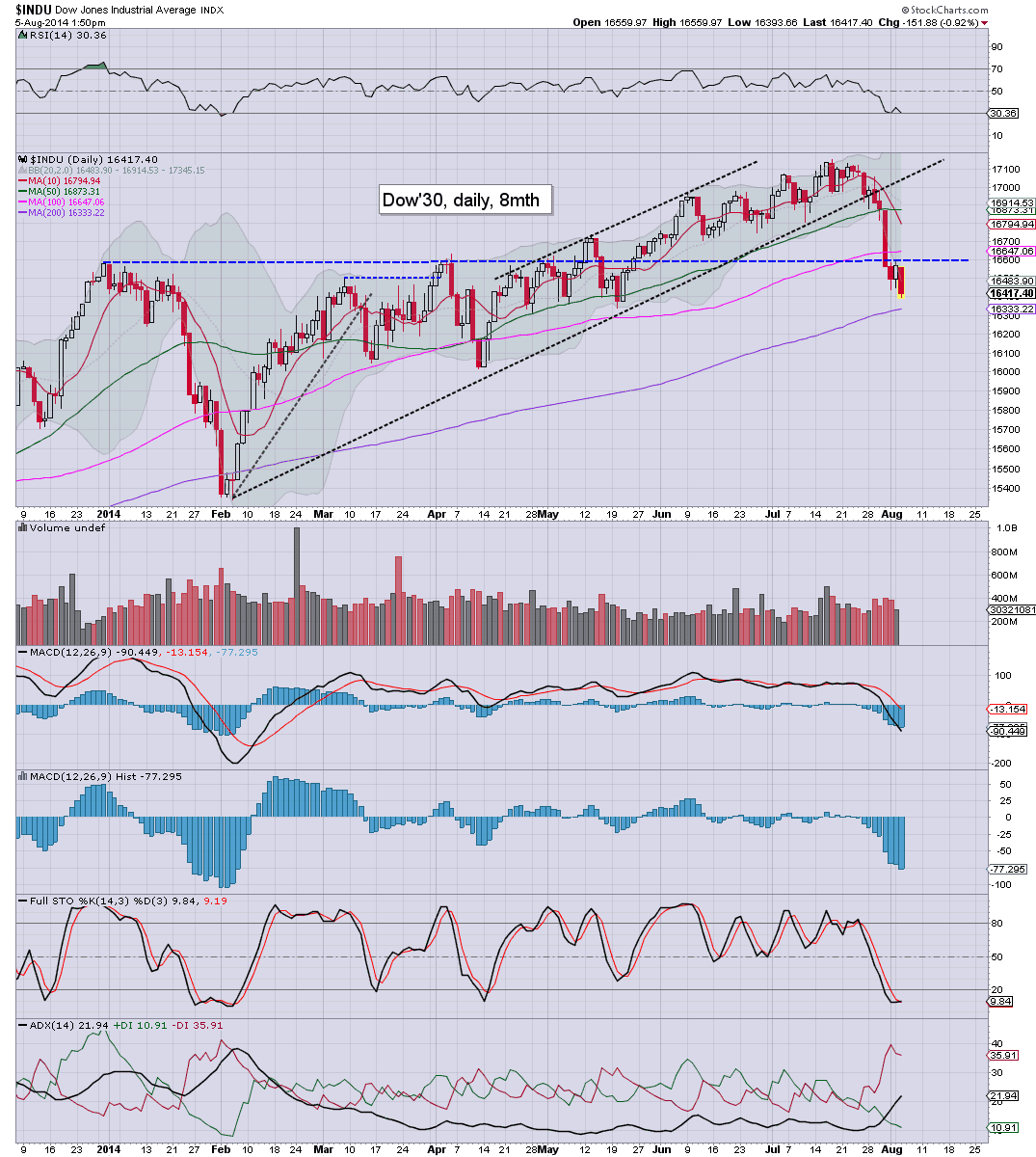 ...its nice to have a market that is 'behaving' as projected.
-

I see a LOT of traders finally starting to awaken.. after what was a pretty quiet start to the week. *note how the VIX has NOT broken the 17.50 high from last week? It makes for a good divergence for those looking to go long.
Posted by Trading Sunset at 18:51:00
Email ThisBlogThis!Share to TwitterShare to FacebookShare to Pinterest

US indexes remain somewhat weak, the sp' looks set for the low 1920s this afternoon. Primary target zone is 1915/00.. with a VIX that should (notably) remain below the recent high of 17.50s. Metals and Oil remain weak. 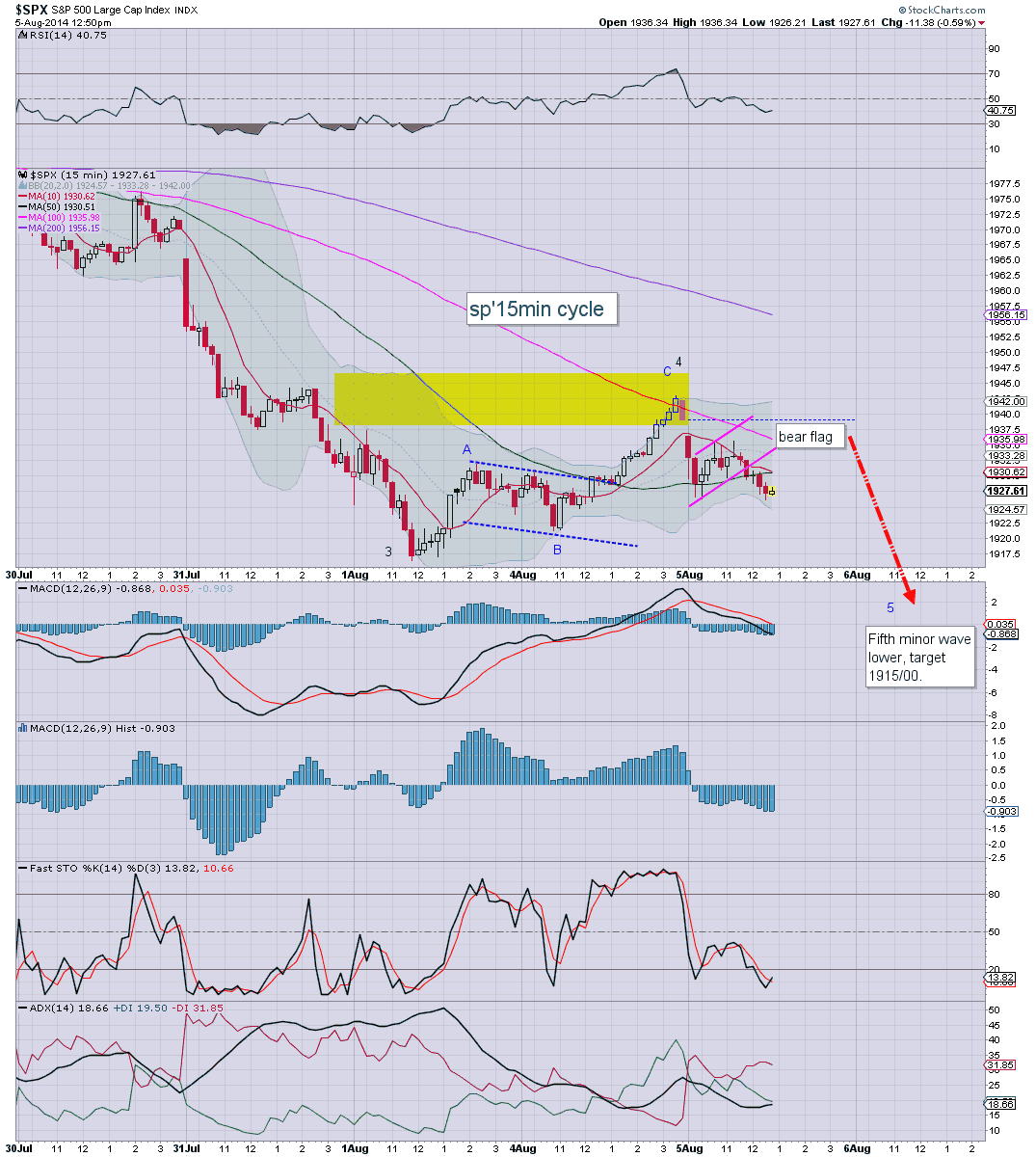 Regardless..still some way to fall from current levels.
-

100pts until the Dow 200dma.... due tomorrow.
Posted by Trading Sunset at 17:52:00
Email ThisBlogThis!Share to TwitterShare to FacebookShare to Pinterest

US indexes look set for more significant weakness this afternoon. The sp'500 looks set to slip into the low 1920s, which will likely equate to VIX in the low 16s. Metals are weak, Gold -$4, whilst Oil is lower by a rather significant -1.1%. 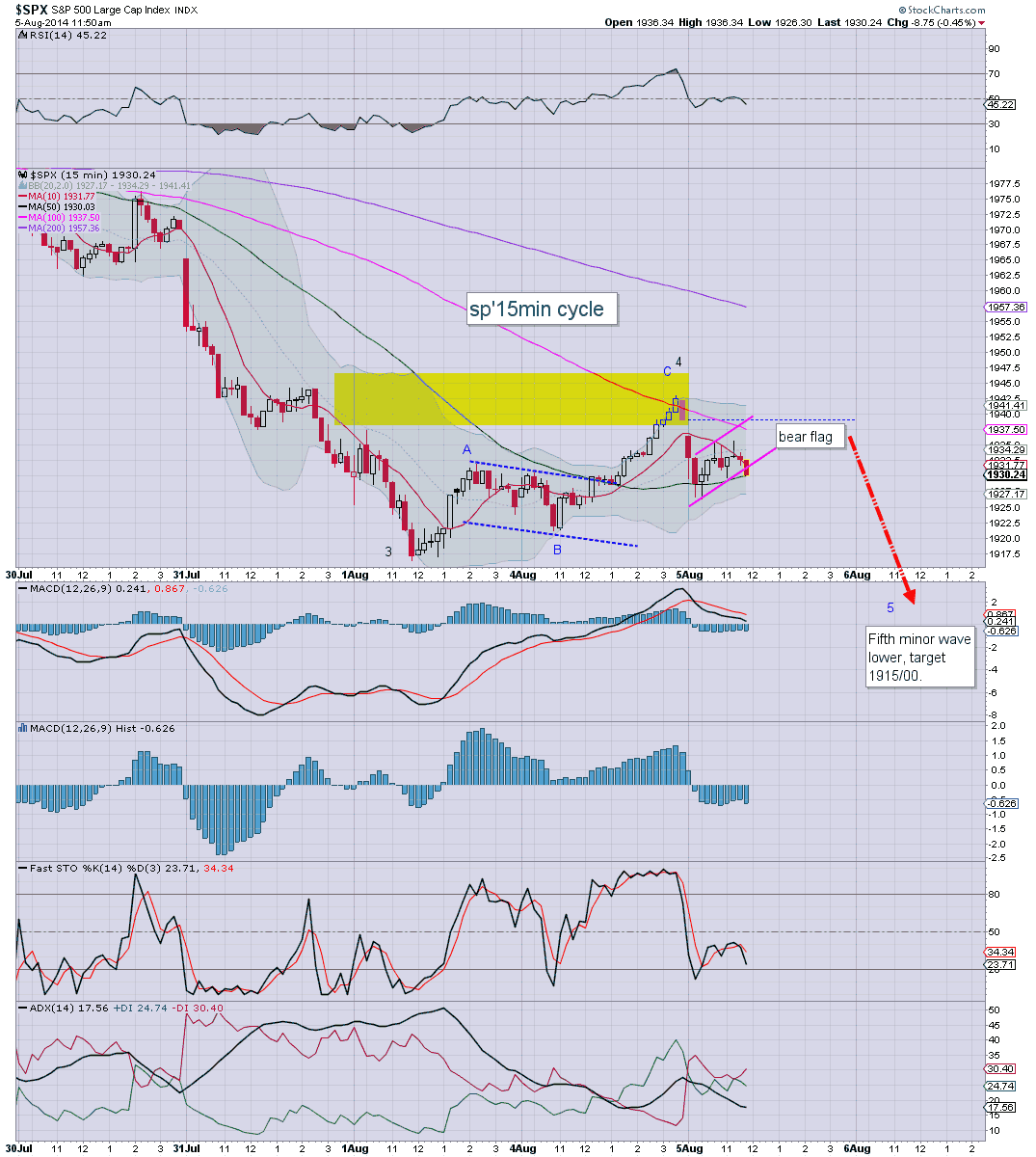 *the micro waves are notoriously tricky to fathom... but so far.. things remain on track for a minor fifth wave lower.. and then a multi-week up wave...into mid September. 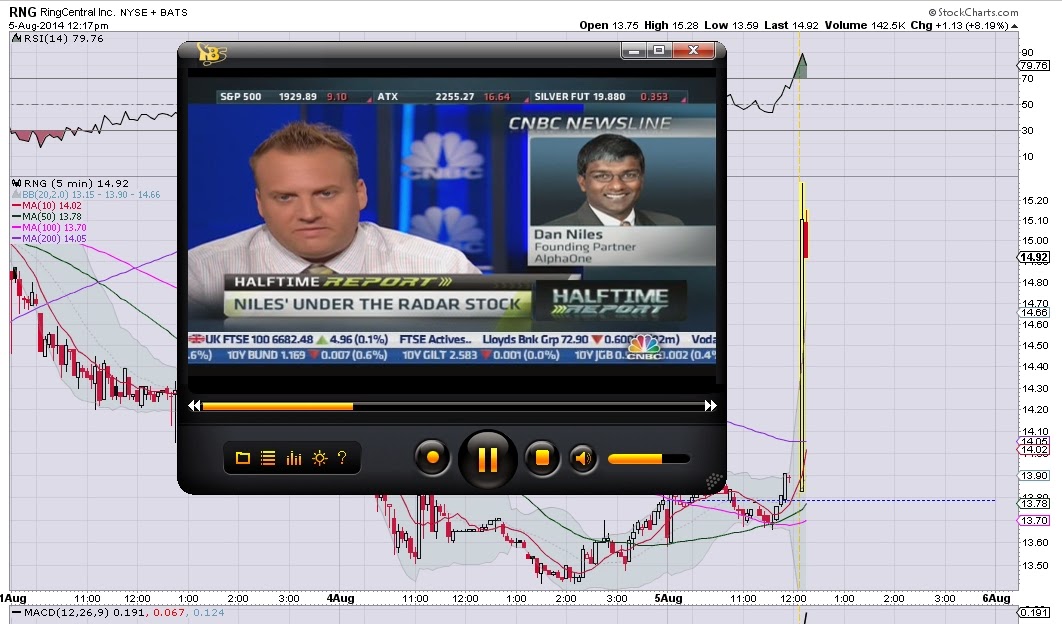 12.29pm... Morning low set to be broken....  VIX on its way to the low 16s.
Posted by Trading Sunset at 16:51:00
Email ThisBlogThis!Share to TwitterShare to FacebookShare to Pinterest

US equities see a minor up wave, but the Monday high of sp'1942 is comfortably holding. A further wave lower to 1915/00 zone is expected... which will probably NOT result in the recent VIX 17.50s high being broken. Metals/Oil both moderately lower. 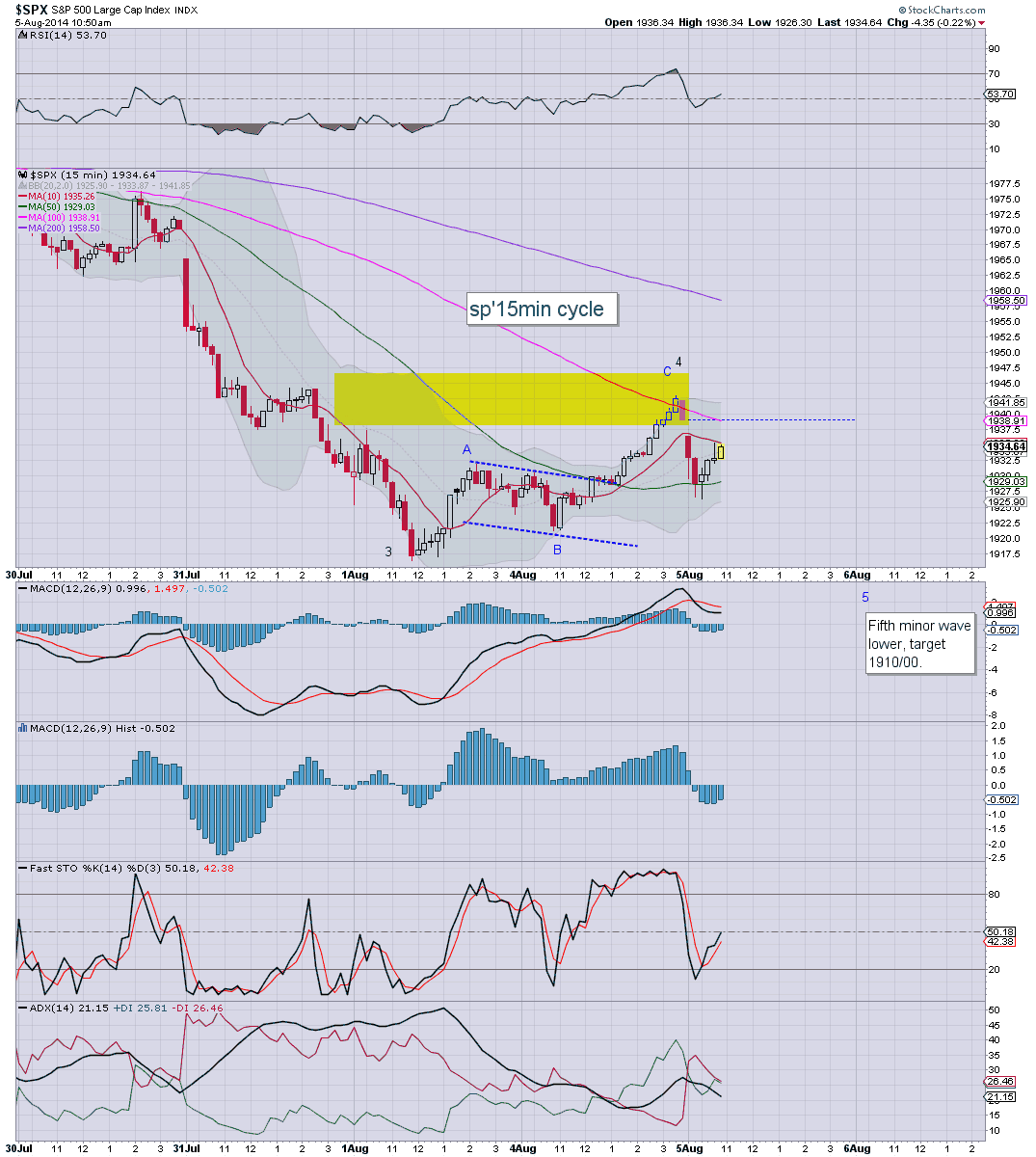 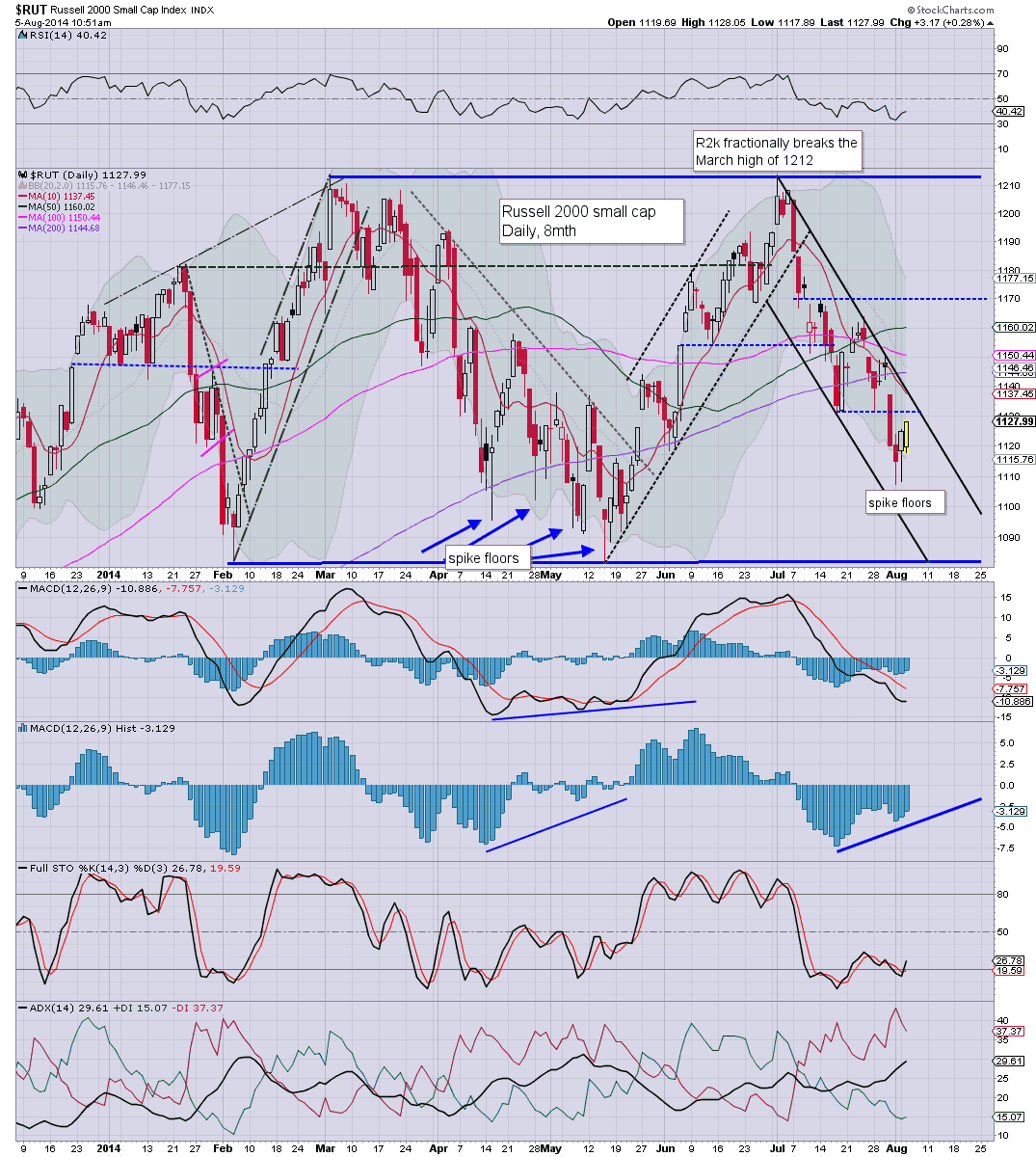 *notable strength in the R2K, but really, until it breaks out of the down channel...bulls have nothing to tout on that mess.
--- 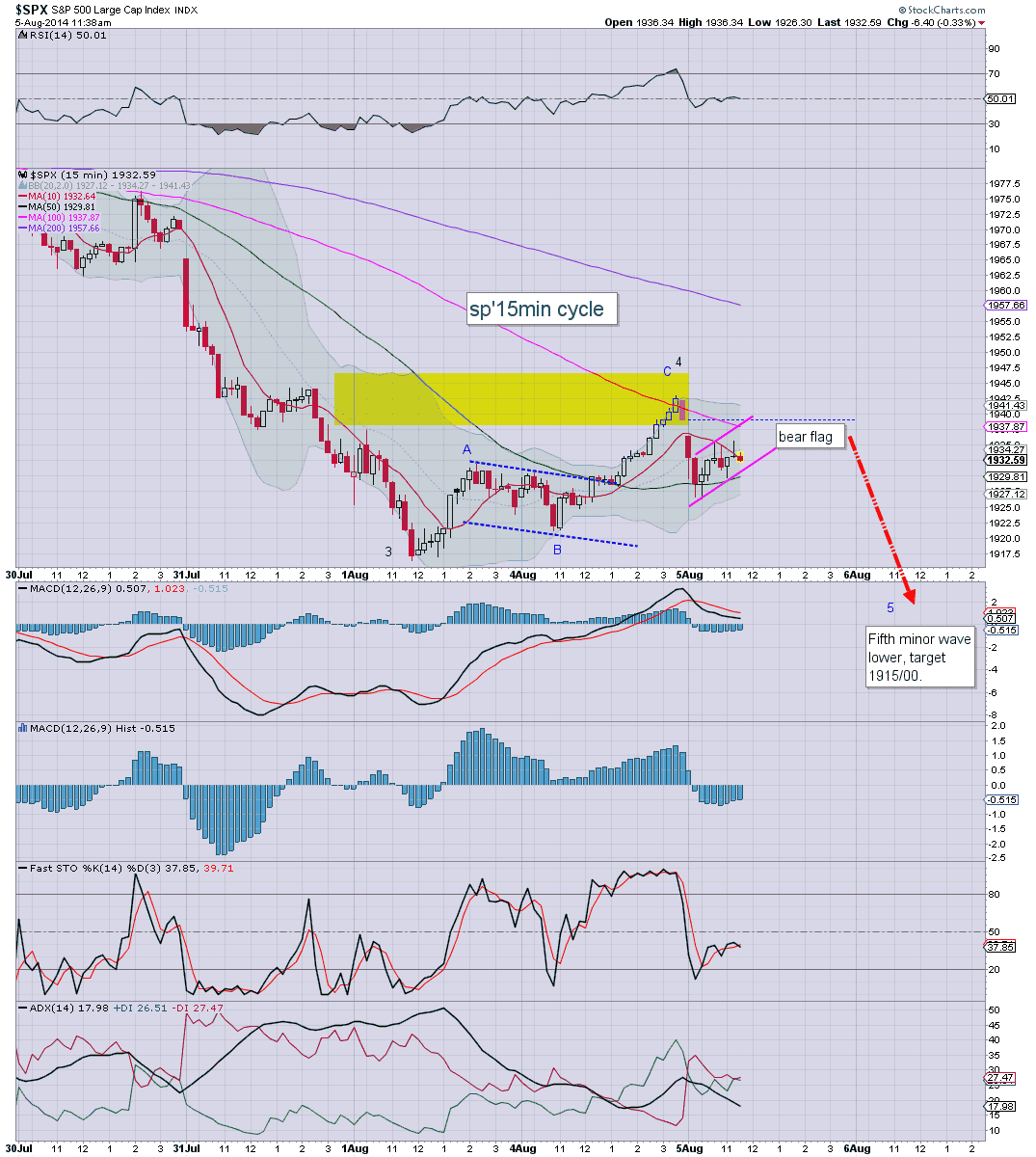 --
Posted by Trading Sunset at 15:52:00
Email ThisBlogThis!Share to TwitterShare to FacebookShare to Pinterest

US indexes open moderately lower, and market looks set to break a marginally lower low in the sp'1910/00 zone.. tomorrow..or Thursday. VIX is pushing back upward.. but its possible it will fail to break the 17.50s in this new up wave. 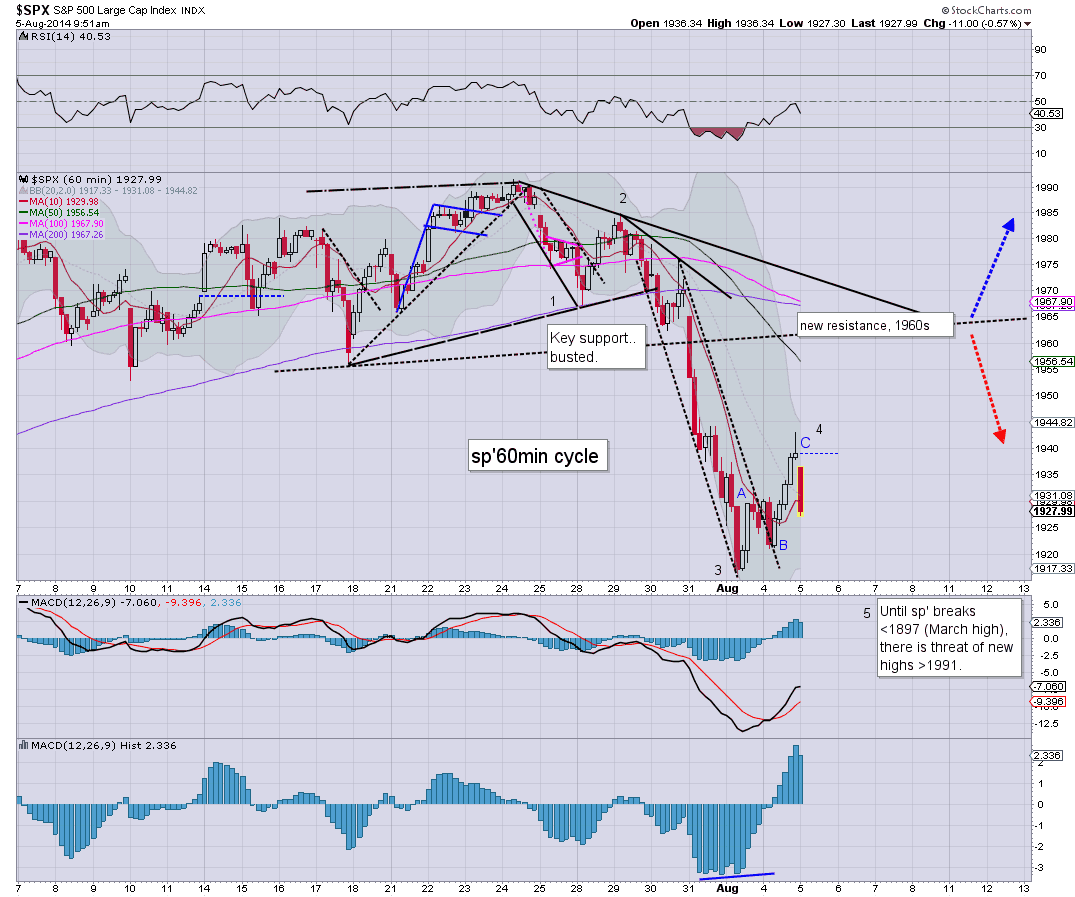 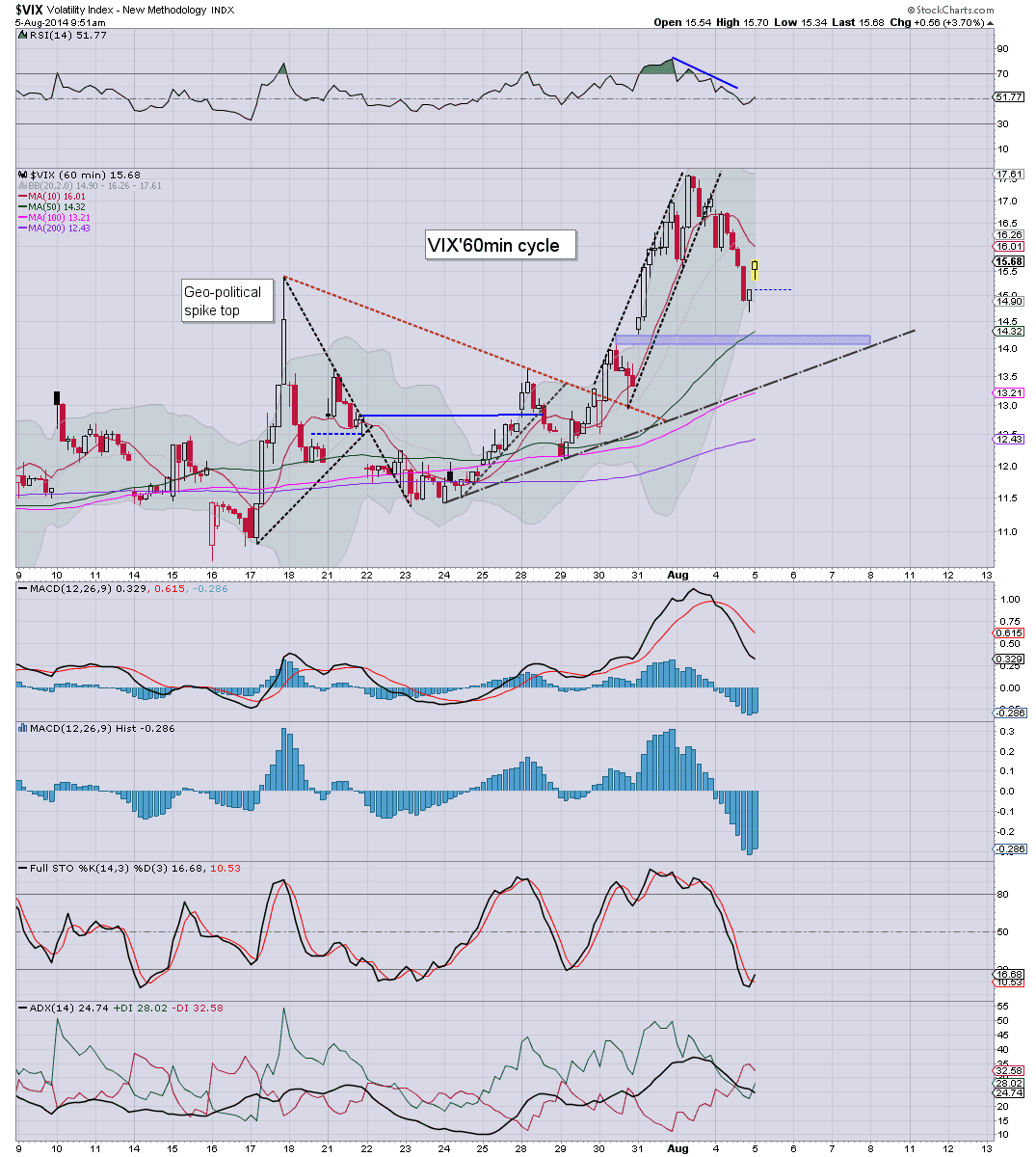 In theory.. a fifth should result in at least a marginally lower low <1916.... tomorrow..or early Thursday.
--

I realise some will be looking for far lower levels (mid/low 1800s), but I just can't see that happening.

I'd be VERY surprised if we break yesterdays high of 1942... today..or even tomorrow.

For the pro traders out there..its a rather simple trading stop.
-

So...bears better hold the line around here.. or we're going to the 1960s instead.

Hey, at least its not boring, right?
Posted by Trading Sunset at 14:52:00
Email ThisBlogThis!Share to TwitterShare to FacebookShare to Pinterest

Good morning. Futures are moderately lower, sp -9pts, we're set to open around 1929. Near term downside target zone is 1910/00, which seems viable Wed/Thursday. USD continues to rally, +0.2%.. which will no doubt help the equity bears. 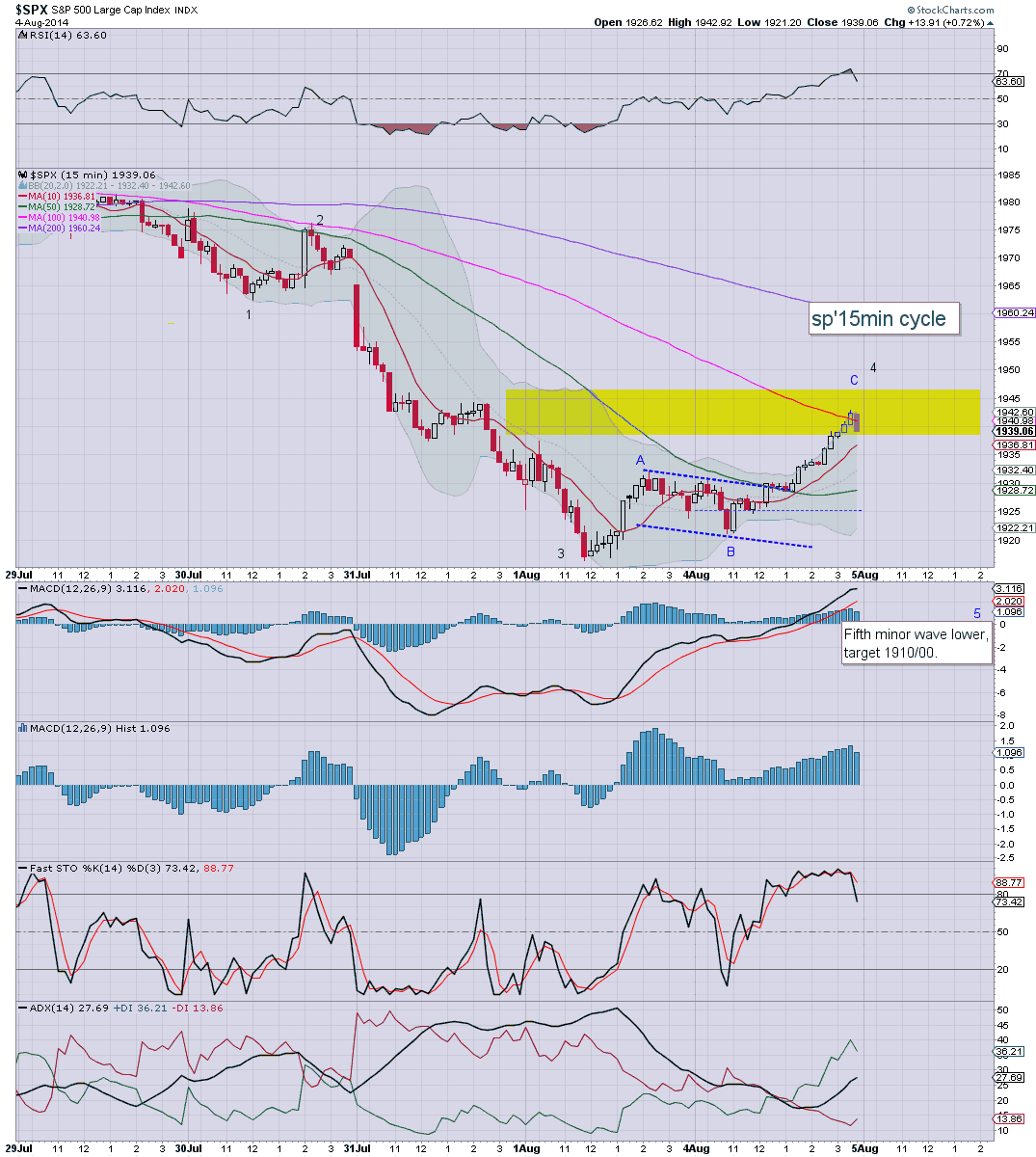 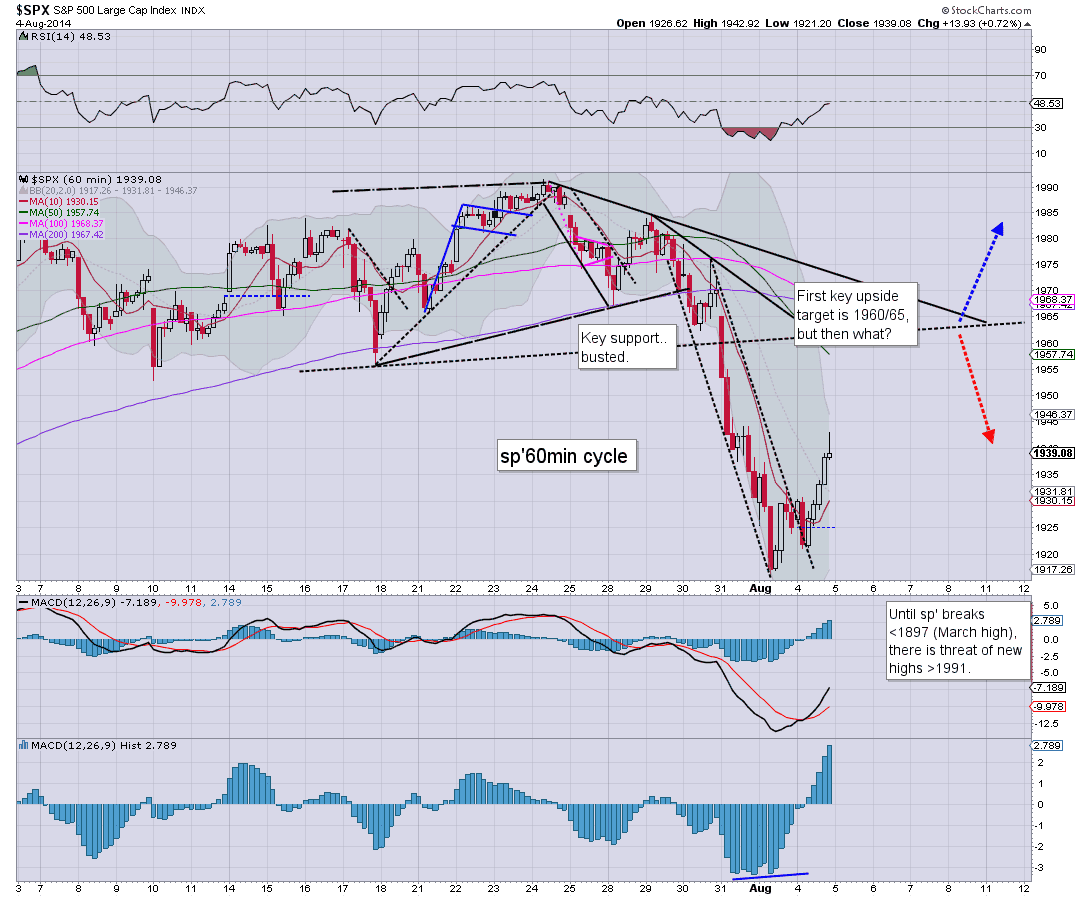 *we have an array of econ-data this morning to be mindful of.
--

So.. we're set to open somewhat lower, and with the hourly MACD (blue bar histogram) cycles as they are.. bears should be in control for much of today.

update from a returning Permabull

Swings across the week

US equities started the week with a minor bounce, but remain highly vulnerable to breaking the Friday low of sp'1916. A further wave down to 1910/00 seems likely, before the bull maniacs get their first real chance of making an attempt to significantly rally. 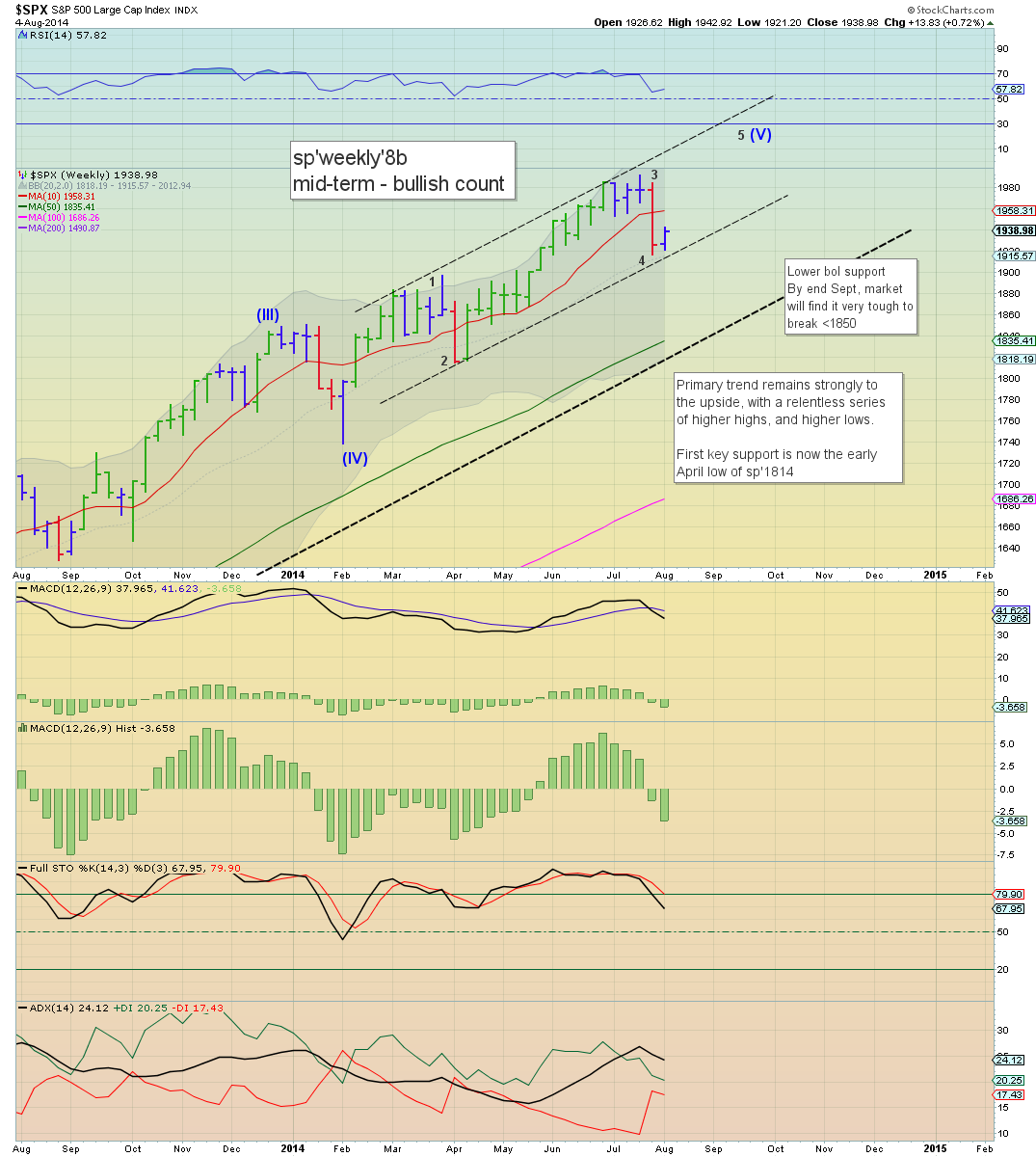 *the above outlook is probably my 'best guess'. I would drop it if we break below the March high of 1897.
--

So, we've started the week with a blue candle (it was red in the morning)..and indeed, I'm somewhat still suspicious that the market will see another wave lower, before the bulls get a better chance of a more significant rally.


Best case for the bears?

For those who think a multi-month top might be in... the following would be a primary scenario... 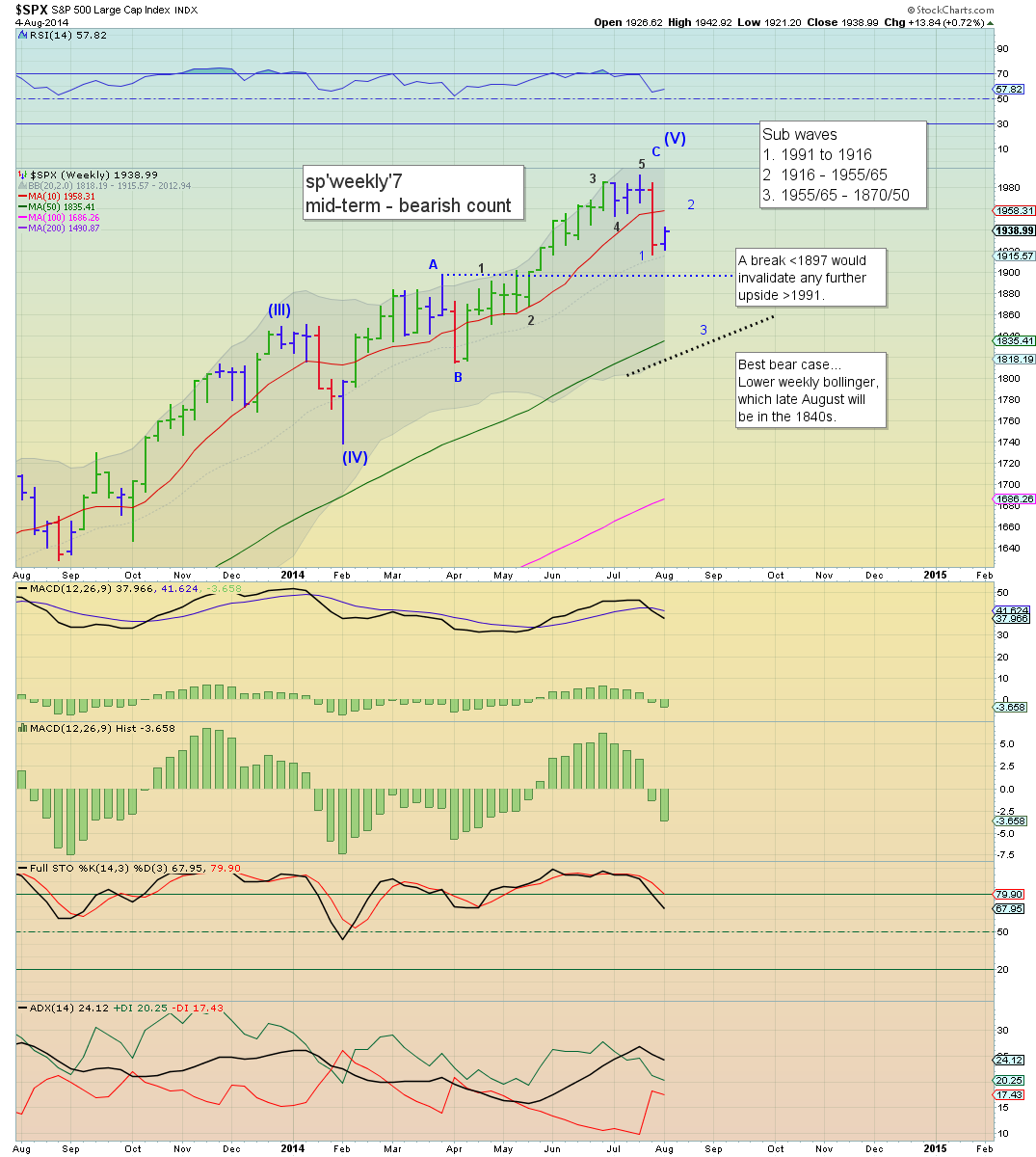 Equity bears need a break under the March high of 1897. Only if that is taken out, can the much bolder target of the lower weekly bollinger - currently @ 1818, be a valid target. I remain concerned that a further wave higher high >1991 is possible into mid September.

Another day of summer 2014 has come.. and gone. A really scary thought (at least to me) is that it won't be long until NFL starts again - always one of the primary reminders that 'winter is coming'.

With last Thursdays index fall of -2%, I'm battling hard to 'not get lost in bearish hysteria'. The usual suspects are (not surprisingly) touting collapse waves in the relatively near term. I remain somewhat resistant to reading almost any news lately. After all, whats the point? Its just the usual 'death and destruction', with a sprinkling of irrelevant celebrity updates.

Tuesday will likely be just another day, I can only hope some of you out there, get something good from it. 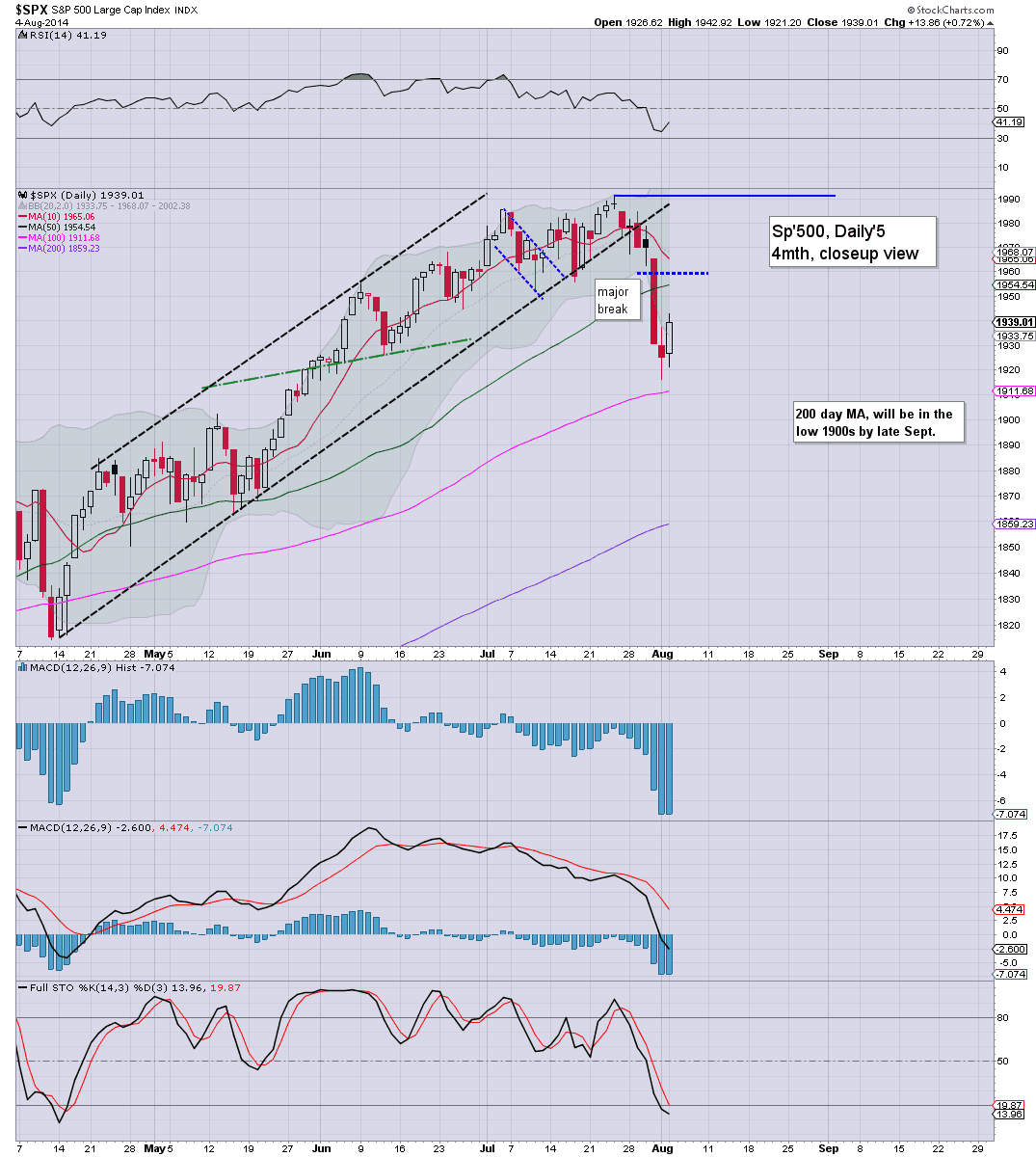 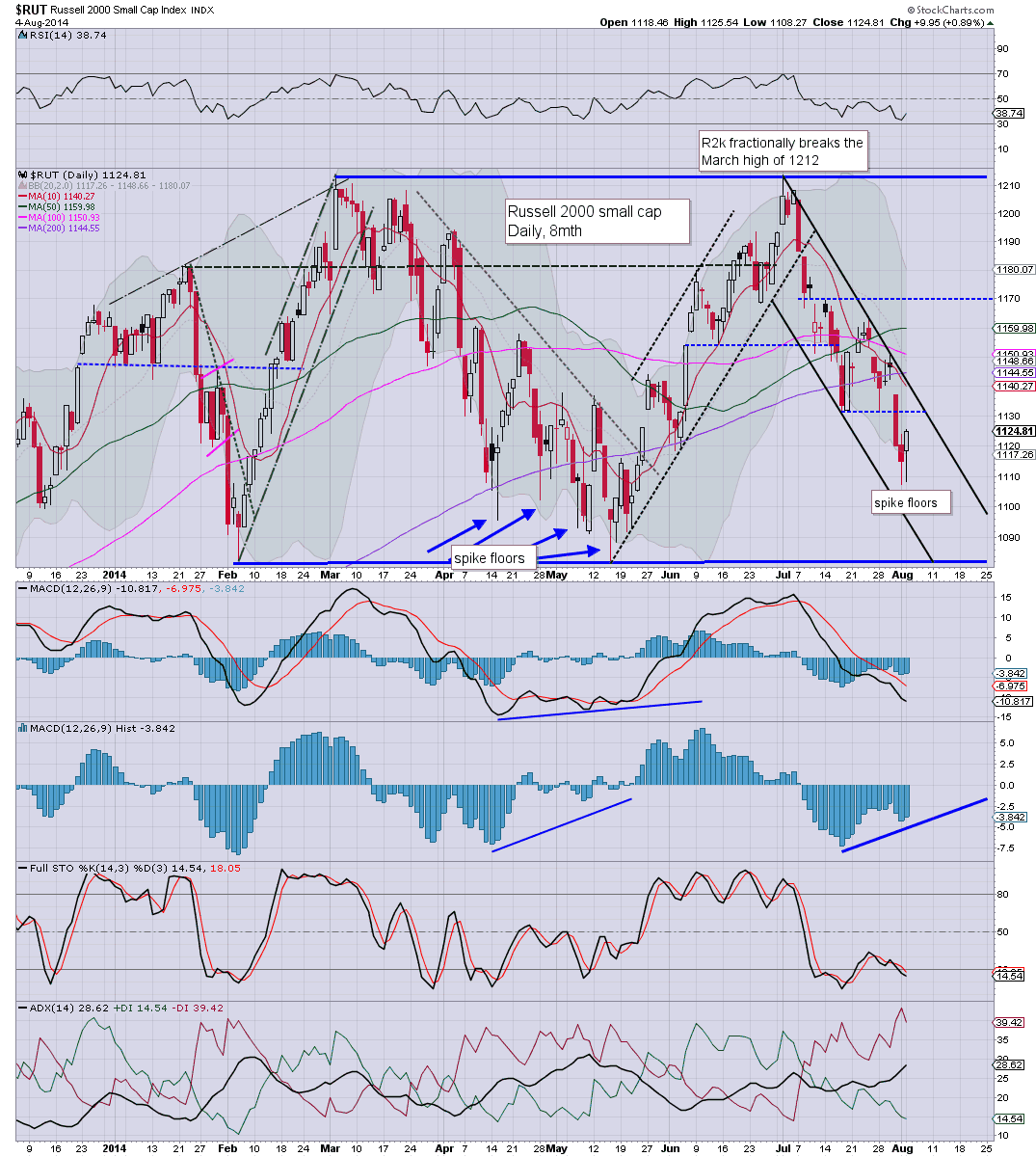 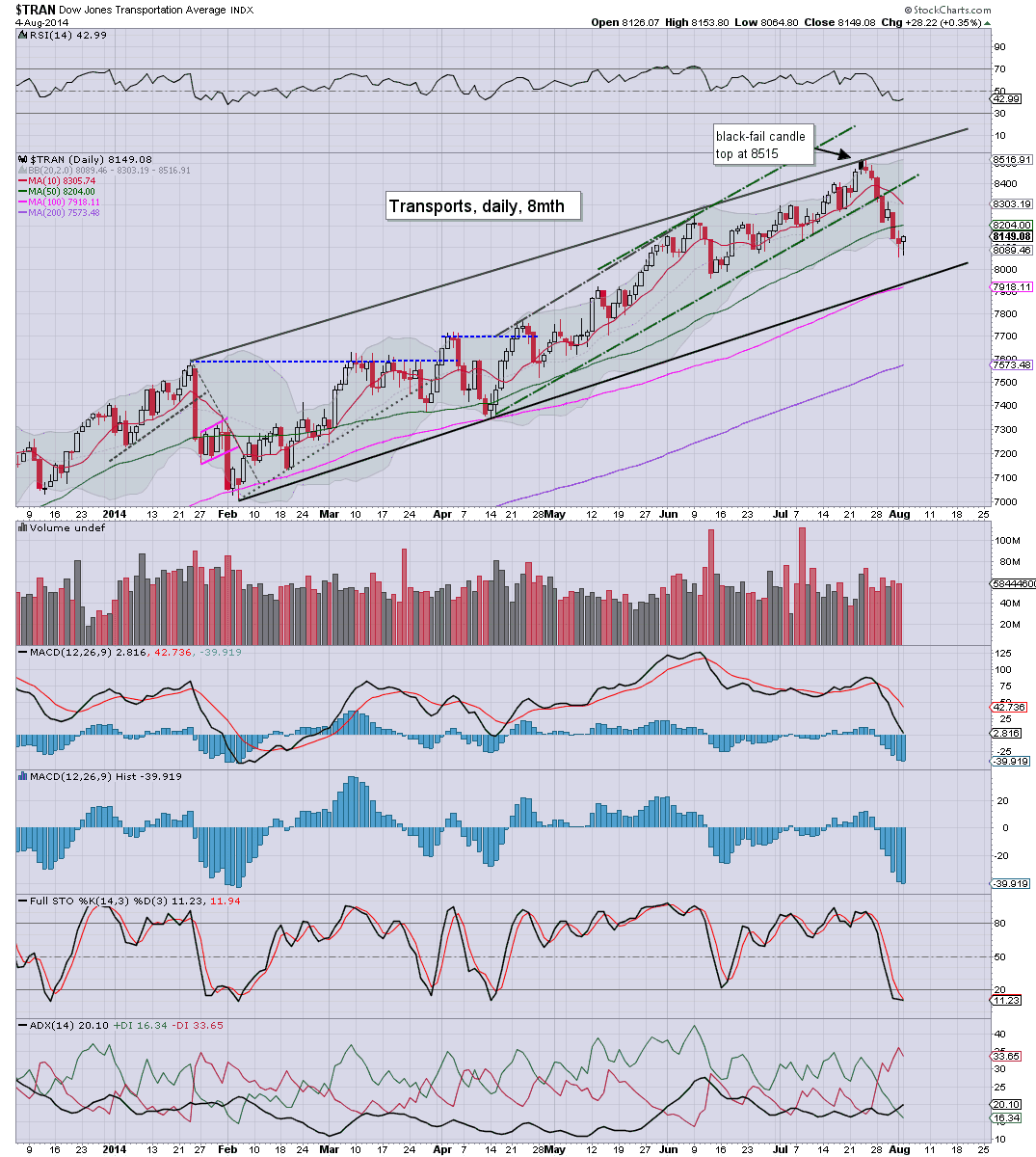 A relatively quiet start to the week, but one which offered bulls and bears alike the opportunity to re-position.

The R2K closed with borderline sig' gains, but remains within a strong down channel. By end of this week, R2K just needs to be in the 1130s... but if the main market does see a further wave lower, then we're probably looking at R2K 1100.

On any basis, the daily MACD (blue bar histogram) is close to flooring on ALL indexes, and it certainly does not make for the best of places to attempt a short side trade.
-