It was a very mixed month for world equity markets, with net monthly changes ranging from +6.1% (France), +0.4% (USA - Dow), to -14.3% (China). Outlook into the early autumn is for increasing weakness across most world markets... before resuming higher into 2016. 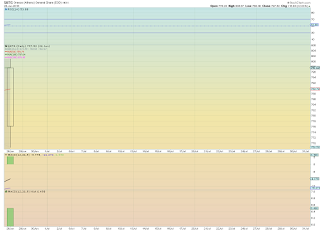 So.. err... yeah... there has been no trading in the Greek equity market since June 26'th. Late Friday afternoon, it was confirmed that the Greek Athex is set to open on Monday August 3rd. Traders within Greece will be subject to extremely tight capital controls, whereas those outside can buy/sell the Greek market as they wish.

There is little doubt the market will see a severe opening drop next Monday. The summer 2012 low in the 400s remains a valid target... and that doesn't even assume a GREXIT or any further political turmoil.

More than anything in July, it remains absolutely stunning to me that a European equity market was closed for an entire month.
-- 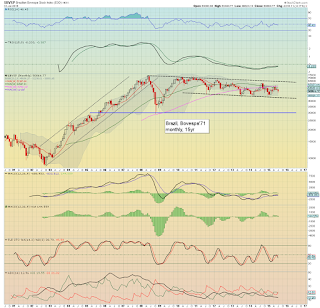 The commodity centric Bovespa slipped -4.2%, having briefly lost the psy' level of 50,000. The Brazilian market remains stuck within a rather tight range for the better part of six years. I would expect an upside break no later than spring 2016.. and onward to 100K. The French market saw the strongest gains in July, +6.1%.. back above the big 5K threshold. Yet.. the April high is still a fair way higher, and the July gains are likely a bounce before resuming lower. There is valid downside to the 4250/4000 zone by early October. 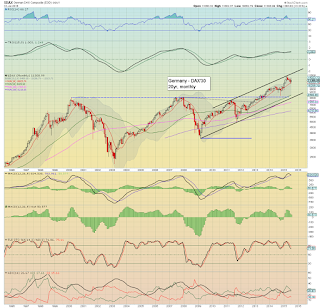 The economic powerhouse of the EU - Germany, climbed 3.3% in July. Price structure could be argued is a multi-month bull flag, but considering the other world markets.. the DAX is probably just consistently sliding lower into the late summer. Next key downside target is 10k, which is around 10% lower. 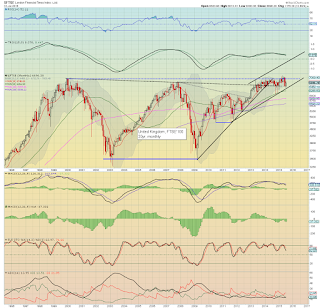 The UK FTSE climbed a net 2.7% to 6696 in July, but this was less than half of the June decline. With a lower high and a lower low, there is little to be bullish about here. Trend support in August will be 6400, if that fails.. its an easy move to 6K. 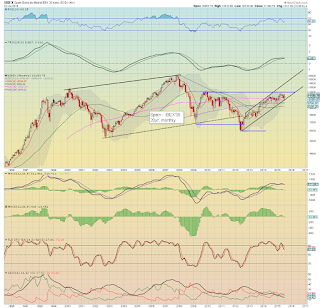 The largest and most problematic of the EU PIIGS - Spain, remains stuck under key resistance of 12K. There is valid downside to 10000 in the near term. 9k is just about possible, but from there... UP into 2016. 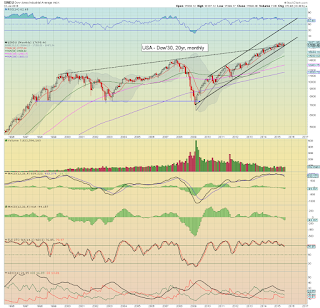 The Dow - along all other US indexes, looks set for a sig' fall across Aug'-early Oct' to the 16500/000 zone. Sustained action <16k looks extremely difficult.. even if the market is upset about an int' rate hike. 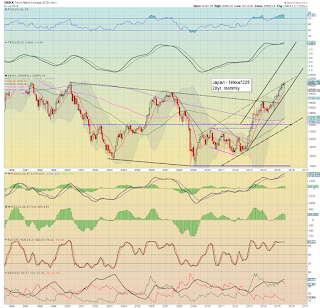 The BoJ fuelled Nikkei climbed 1.7% in July to 20585, but that was notably below the June peak of 20952. There is valid downside to the 17/16k zone, but with probable subsequent upside in 2016 to far... far higher levels. After all, the BoJ will just keep on printing, that much is certain. 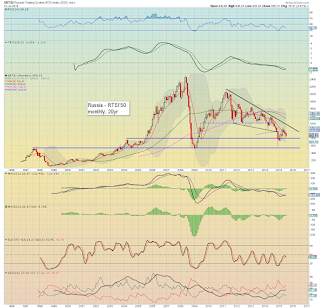 With energy prices seeing severe declines across July, the Russian market was particularly badly hit, -8.1% @ 859. The outlook for Aug-Oct' is bearish, and it would seem the RTSI will be back in the 700/600s before things can stabilise. 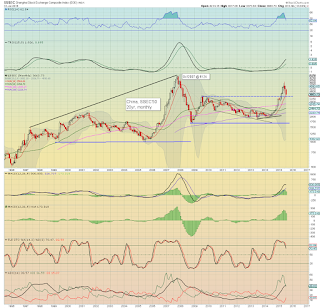 Without question, China continues to see some of the more crazy price action. The July decline of -14.3% @ 3663 was a confirmation of the spiky top candles seen in May/June. A break under the recent low of 3373 seems a given, with first target zone of 3200/3000. Worse case for the retail amateur-gamblers in China is 2500 by early October.

World equity markets saw some dynamic price action in July, not least due to absolute carnage in commodities.

Despite some notable strength - arguably a mere 'bounce', in many of the EU markets, all world markets look to have already maxed out in the near/mid term. For instance, if the Dow does decline to the 16000s by Sept/Oct, it is going to be almost impossible to break new highs in the remainder of this year.

I remain holding to the view of sig' weakness from August to early October... 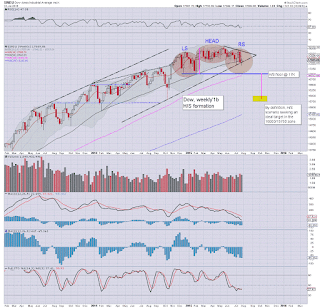 Price structure on the Dow is a particularly bearish H/S formation, although there will not be confirmation of that until we see some consecutive daily closes under the key floor of 17k.
--

There are a fair few things scheduled in the coming week, although as ever.. it is often the things that aren't expected that will more especially spook the capital markets.


Lets take a look at a few bits and pieces to close out the month... 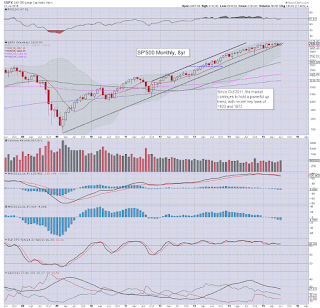 A net monthly gain of around 2%, with an intra month high of 2132.. a mere 0.1% from breaking a new historic high. Like most other US indexes, the sp'500 has been stuck since February. Underlying MACD (blue bar histogram) cycle continues to tick lower, and has been negative for five months. Best downside case is the lower monthly bollinger, which across Aug-Sept, will be in the low 1800s. Sustained price action under 1800 looks completely out of range. 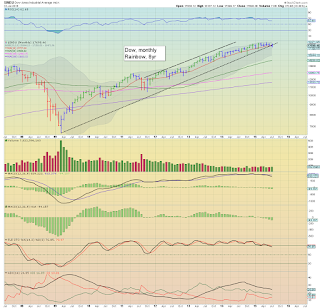 A fifth consecutive blue candle on the Dow 'rainbow' monthly chart. The Dow looks to have a mid term top of 18351, and looks in the early stage of a decline to the 16500/16000 zone by early October. 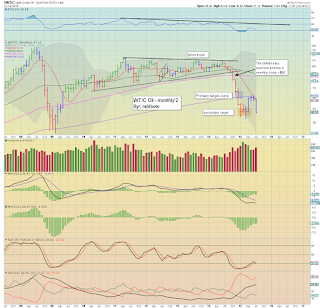 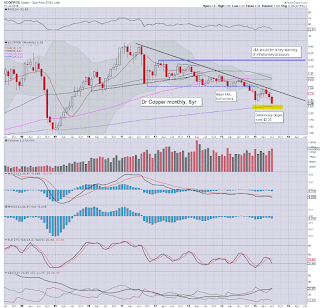 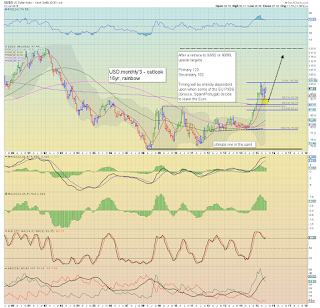 A net monthly gain of 1.9% @ DXY 97.44. Regardless of any continued chop across the next few months, the USD looks set to re-take the giant 100 threshold.. .and then proceed onward to the 120s. That will have a great many implications.

--
Goodnight from London
-
*the weekend update will be on the world monthly indexes
Posted by Trading Sunset at 04:00:00
Email ThisBlogThis!Share to TwitterShare to FacebookShare to Pinterest 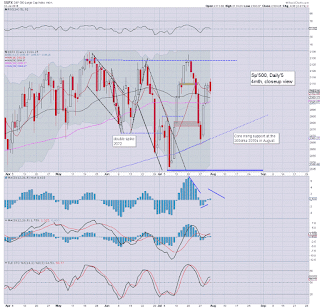 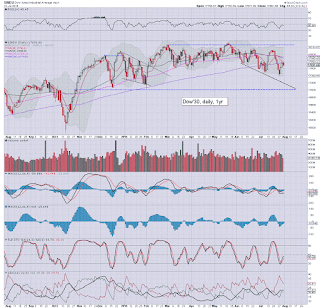 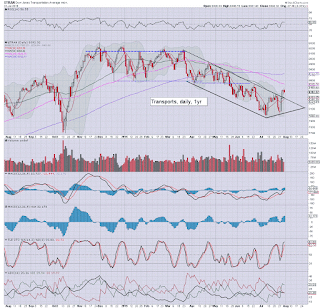 *the market laggard - Trans, continues to hold above the old descending channel... but broadly... the Trans is still exceptionally weak, relative to the rest of the market.
--

Suffice to add, the main market managed to hold most of the gains built since the Monday low of sp'2063. The weekly close in the 2100s is a notable victory for the equity bulls, along with a third daily close above the 50dma.

As things are, the hourly cycle is offering increasing weakness across next Mon/Tuesday. The real issue is whether the market can get a daily close under the 200dma, which will be in the 2070s next week.