It was a fourth consecutive bullish week for most US equity indexes, with net weekly changes ranging from +1.4% (Nasdaq comp'), +0.6% (sp'500, R2K), to -0.2% (Transports). Regardless of any near term cooling, further broad upside looks due across August and into September. 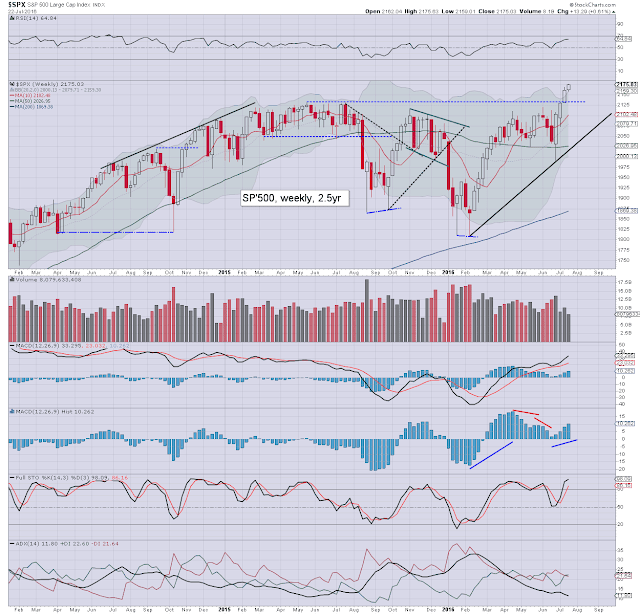 A net weekly gain of 13pts (0.6%), with a new historic high of 2175. Underlying MACD (blue bar histogram) cycle ticked higher for a fourth week. Upper bollinger is 2159, and the weekly close was the first above/outside the upper bollinger since June 2014.

Best guess: a little chop ahead of the FOMC, but then climbing into end month, although the 2200s look more viable in early August. The 2225/50 zone is highly probable into early September. 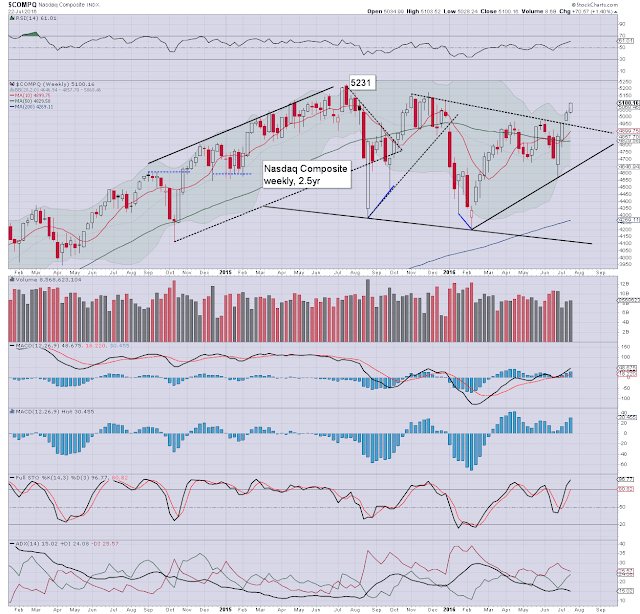 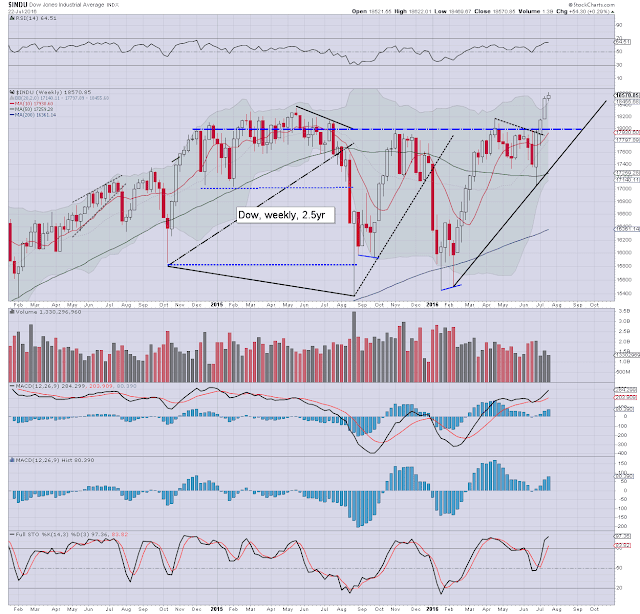 For those who believe in giant multi-year waves and aspects of fibonacci, starting from March'2009, if the 19000s are seen, next key fib/price target would be 25/26k. That looks an extreme stretch by late spring 2017, but will be well within range in 2018.

Old resistance of 18k is now first support, and by mid September, rising support will also be around 18k.
-- 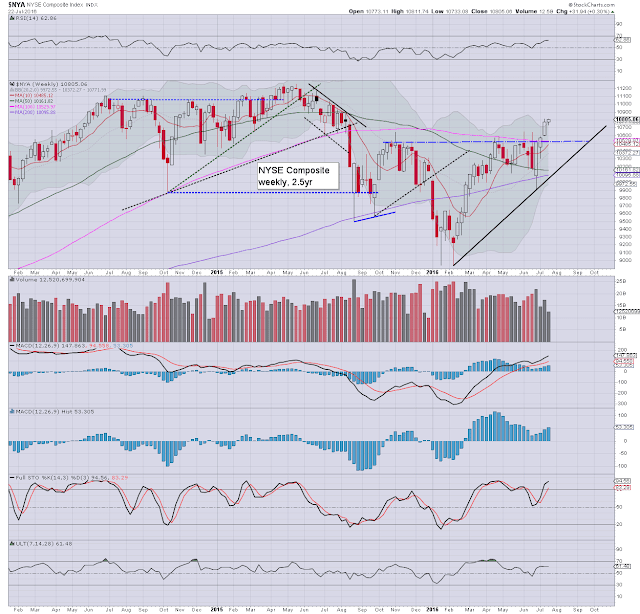 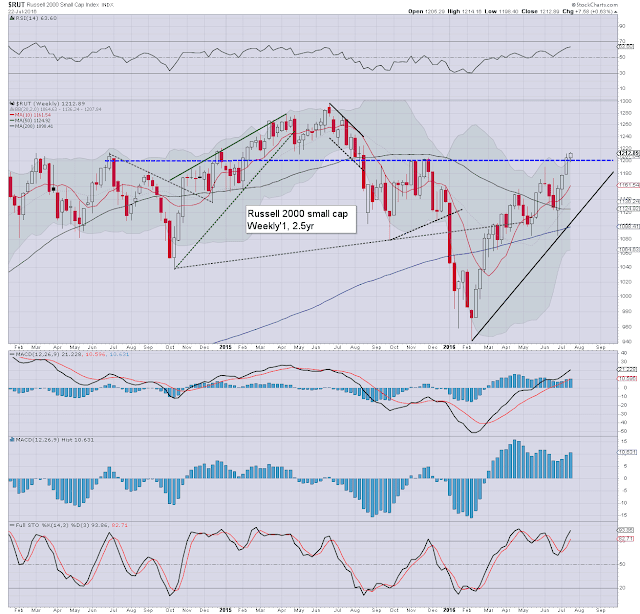 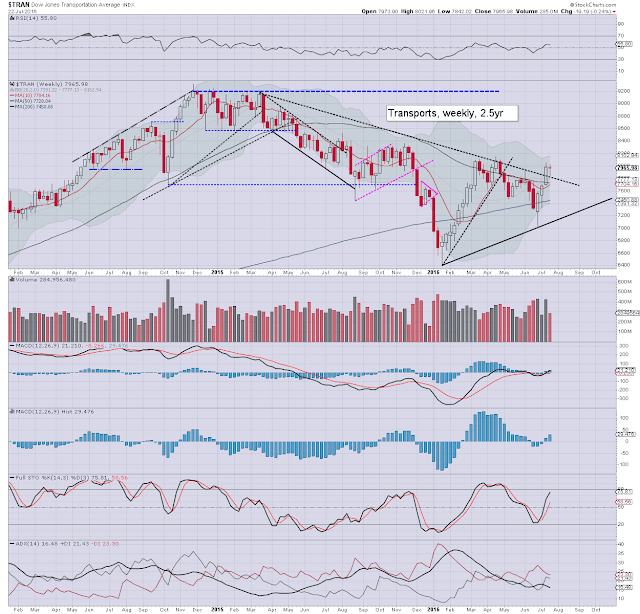 The 'old leader' - Trans, was the notable exception this week, with a minor net decline of -0.2%. 8K remains pretty strong resistance, although the tranny still looks set to climb with the rest of the market. Next upside target are the 8300/400s. The Nov' 2014 historic high of 9310 is still a very considerable 16.9% higher.
--

Broadly, US equities continue to climb from their post BREXIT lows.

The sp'500 and Dow are leading the way higher, with the Nasdaq set to follow with a new historic high in Aug/September. At the current rate, the R2K/Trans are still 3-6 months away from having realistic opportunity of new historic highs.

Equities could decline around 3% in Aug'/early Sept', and that would not do any damage to the mid term bullish trend.
--

A reminder on what remains one of the more valid scenarios... 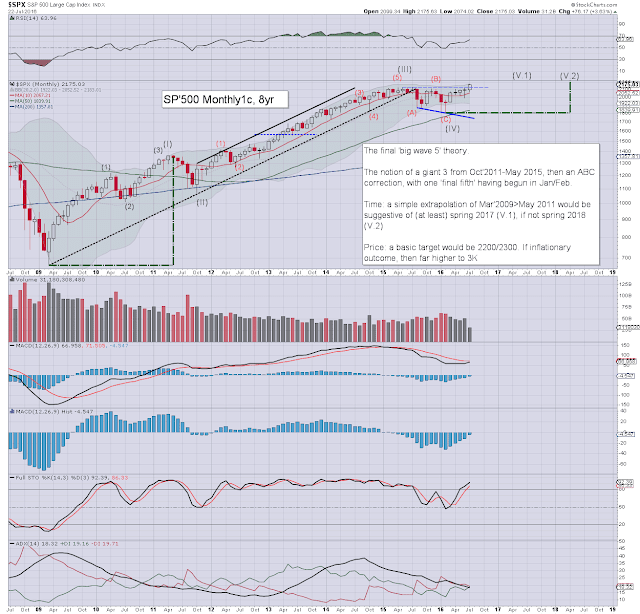 Having decisively broken above the summer 2015 high, it can be argued that price action since Jan/Feb is part of a final fifth wave. Time is as much an issue as price. Continued upside into spring 2017 looks probable, and based on wave'1, a more extended move all the way into spring 2018 is possible.

Along with further corp' earnings, there is a fair amount of important econ-data.

The FOMC are set to announce at 2pm, there will not be a press' conf.

The week is light on Fed officials, with just Williams/Kaplan on Friday. I would imagine Yellen will be busy working on 'Reasons not to raise rates - excuses 451-455', for the autumnal FOMC meetings.
--


If you have valued my posts across the past four years, you can support me via a monthly subscription, which will give you access to my continuing intraday posts. 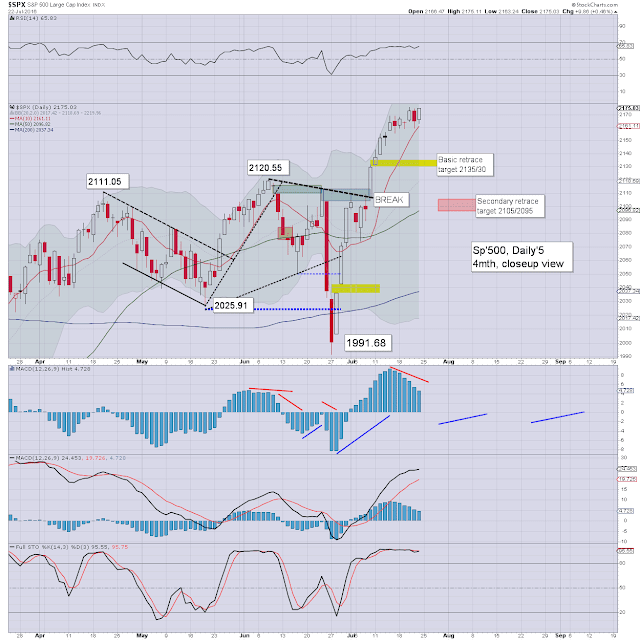 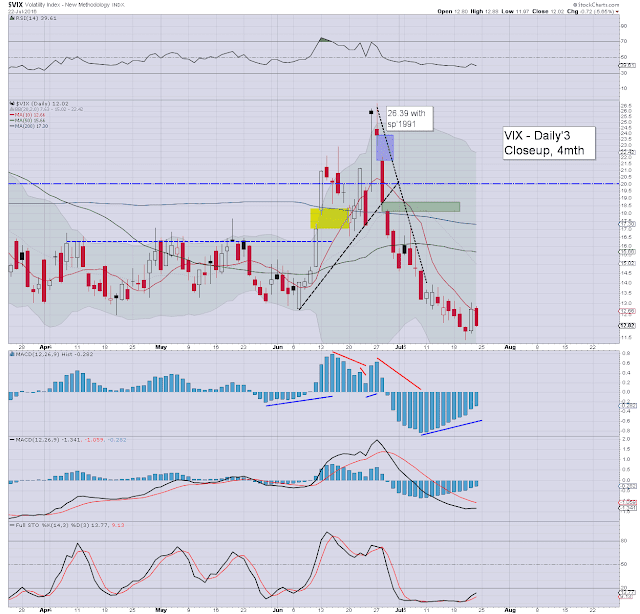 So, despite yet another Friday 'event' in mainland Europe, the sp'500 ended the week at the historic high of 2175.

VIX was naturally back in cooling mode, settling sub-teens for the ninth consecutive day. The key 20 threshold looks out of range until mid/late September. 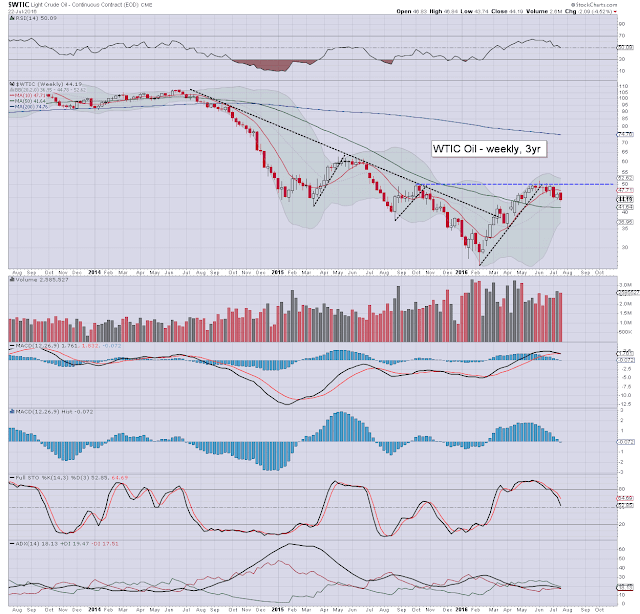 A significant net weekly decline of -$2.09 (4.5%), settling @ $44.19. Clearly, the psy' level of $50 is natural resistance. It could be argued price structure is offering a large multi-month bull flag, that would be provisionally confirmed with a weekly close >$48.

The weakness in oil is not particularly surprising considering the continuing strength in the USD. There will be some significant downward pressure in Oil, Gold/Silver, and even equities, on a break >DXY 100. 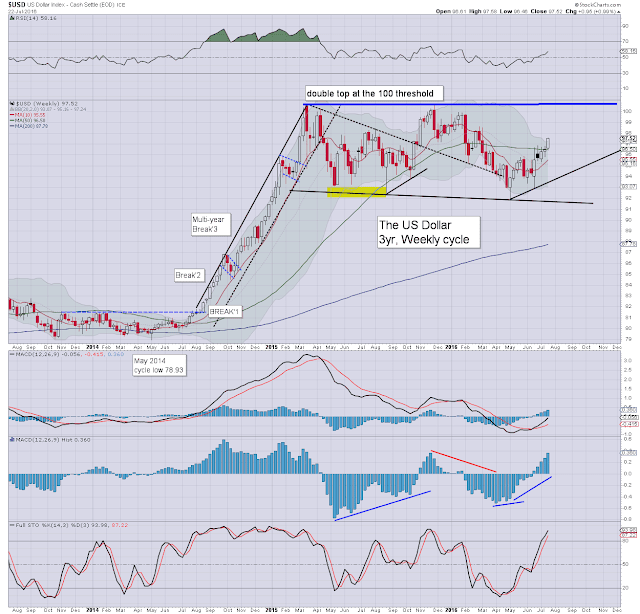 The US Fed will certainly not wish to see the USD break above DXY 100, and will thus be highly inclined against raising rates - which would make the USD even more attractive. Price action/structure since early 2015 could be argued is a giant multi-year bull flag. A break >100 would offer an eventual move to the 120s, which would likely equate to USD>GBP parity.

*the weekend post on the US weekly indexes will appear Sat' @ 12pm EST
Posted by Trading Sunset at 00:00:00
Email ThisBlogThis!Share to TwitterShare to FacebookShare to Pinterest
Newer Posts Older Posts Home
Subscribe to: Posts (Atom)