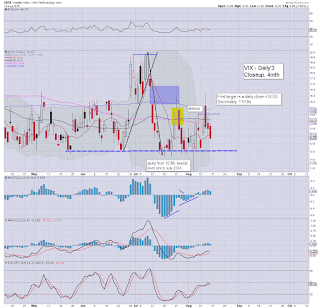 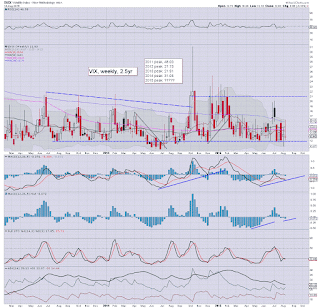 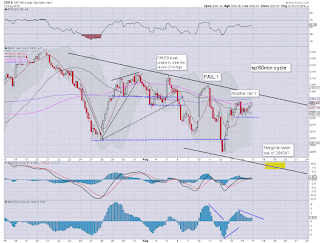 ... and another week comes to close.

First, I realise some will be moderately spooked at today's net daily gains, but really... I can't take it seriously.  Across all indexes since May, its been a series of lower highs.. and lower lows... as especially seen on the bigger weekly cycles.

No doubt some will be calling for broader upside into September... good luck with that.
--

*I hold long-VIX across the weekend, and have little concern, seeking an exit in the 17s next Tue/Wed.
--

Have a good weekend
--
*the usual bits and pieces across the evening to wrap up the day.
Posted by Trading Sunset at 21:01:00
Email ThisBlogThis!Share to TwitterShare to FacebookShare to Pinterest

3pm update - chop into the weekend 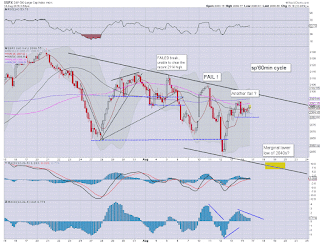 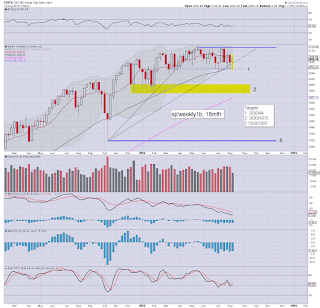 A very subdued end to what was a pretty dynamic week.

In many ways.. EVERYONE is getting the opportunity to reposition. There can be no whining or excuses next Monday.. if the market is breaking >2100.. or on the way to new cycle lows.
--

back at the close.
Posted by Trading Sunset at 19:57:00
Email ThisBlogThis!Share to TwitterShare to FacebookShare to Pinterest

US equities are holding minor gains, but look increasingly vulnerable into the close. A weekly close above declining resistance @ 2099 looks well out of range. The equity bears have continued to hold the market in a series of lower highs.. and lower lows. 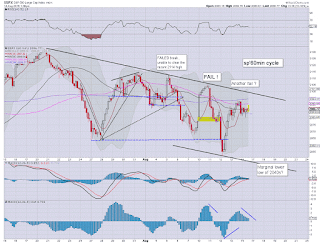 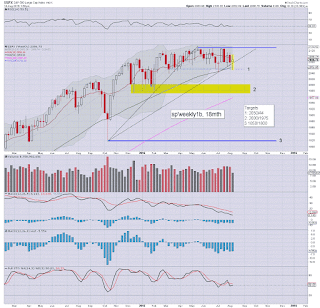 *Last weeks close was sp'2077... so.. a fractional net weekly decline is just about possible, with two hours to go.
--

back at 3pm
Posted by Trading Sunset at 18:51:00
Email ThisBlogThis!Share to TwitterShare to FacebookShare to Pinterest

US equity indexes are moderately mixed.. and remain set for some underlying increasing weakness into the weekly close. VIX remains subdued in the 13.50s, a close above the Thursday high of 14.33 would make for a bullish engulfing candle, and that would be suggestive of equity downside next Monday. 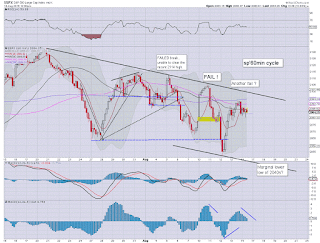 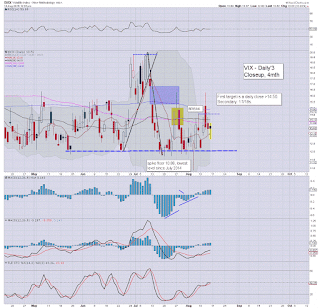 Hourly cycle is offering increasing weakness into the close.. with the sp'2040s next week.

*as things are, I've little concern about holding long-VIX across the weekend. The 15/16s look within range by late Mon/Tuesday.

--
back at 2pm
Posted by Trading Sunset at 17:52:00
Email ThisBlogThis!Share to TwitterShare to FacebookShare to Pinterest 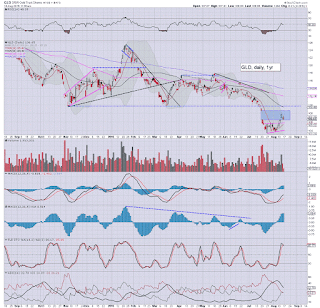 Little to add... on what is a day of minor equity churn to wrap up the week.

notable weakness, miners, GDX -1.6%.. having opened up around 2%. Not exactly a surprise. 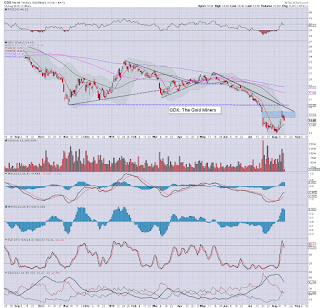 Broader trend for the Gold/Silver miners remains very weak, as Gold is set to lose the $1100 threshold.

-
time for tea :)
Posted by Trading Sunset at 16:51:00
Email ThisBlogThis!Share to TwitterShare to FacebookShare to Pinterest

US equities are starting to lean on the downside, with likely increasing downside into the weekly close.  Metals are holding moderate gains, Gold +$3. Oil is in bounce mode, +0.3% in the $42s, but looks highly vulnerable to losing the $40s in the immediate term. 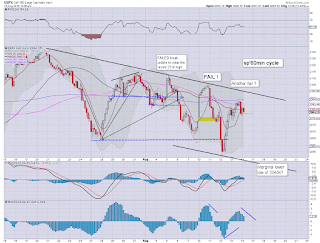 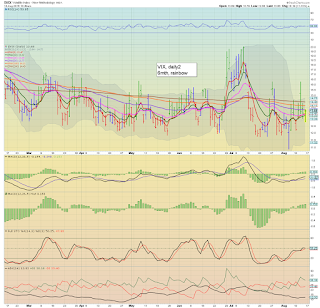 Clearly, if the sp'2040s are coming, they sure aren't viable today.. or even early Monday.

As things are.. the setup favours the bears into early next week. The only issue that would provisionally negate such an outlook would be a Friday close above declining resistance of sp'2099... and I sure don't expect that.

--
time for a slightly early lunch...

Gold turns red... taking the miners lower.
Posted by Trading Sunset at 15:51:00
Email ThisBlogThis!Share to TwitterShare to FacebookShare to Pinterest 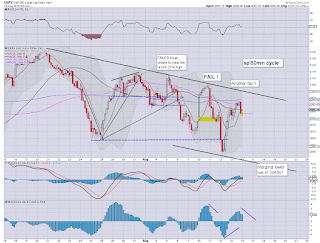 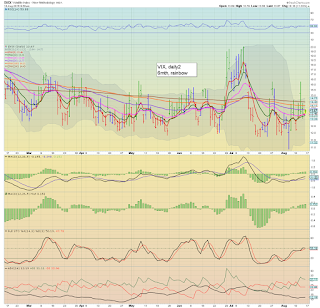 *the fourth consecutive green candle on the VIX chart... a break back above 14.50 will be a key signal.
--

A pretty dull open... now its case of whether today turns into a holding pattern day... or building weakness into the weekend.. with follow through downside next Mon/Tuesday to sp'2040s.

Eyes on TLT, currently a touch lower in the $123.50s....   equity bears are going to need 125s to see new cycle lows.. and clearly.. that now looks out of range until next week.
Posted by Trading Sunset at 14:53:00
Email ThisBlogThis!Share to TwitterShare to FacebookShare to Pinterest 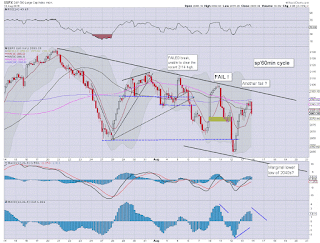 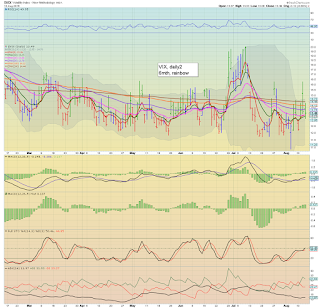 Well, its the end of the week... and I'll be glad for the weekend.

The setup on ALL cycles favours the bears today. If we can see a few of the rats 'bail into the weekend', then things could spiral lower across the day.

*I remain long-VIX, I would prefer to close out into the weekend..  15s would be a moderately acceptable exit... 16s would be great.
- 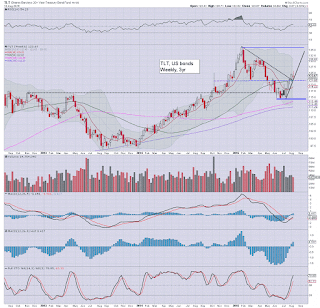 For those seeking another sig' equity down wave... look for TLT in the 125s.. whether late today.. or Monday. I'm with Armstrong on bonds... upside into early Oct'... and then we might see a multi-decade turn.
-

It would seem to be just a case of when the market breaks into the 2060s.. and keeps on going.

notable weakness: AAPL, -0.4%.. a fair way to reach the $100 threshold.
Posted by Trading Sunset at 12:09:00
Email ThisBlogThis!Share to TwitterShare to FacebookShare to Pinterest

Not the best of days

With one trading day left of the week, the sp'500 is currently net higher by 5pts (0.3%) at 2083. A weekly close <2070 would really help maintain the mid term bearish outlook... along with VIX in the 15/16s. Tomorrow will unquestionably be rather important. 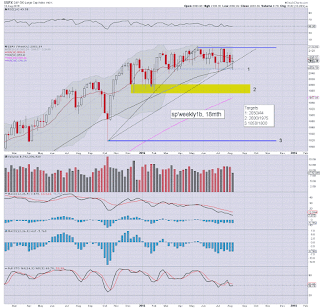 re: VIX... the more significant upside does not look likely for at least another 2-3 weeks. Once the key 20 threshold is broken above though... the only issue is how high might we spike. The mid 20s look a reasonable target by next FOMC of Sept'17th.
--

Considering recent price action, there looks to be a fair chance of a marginally lower low <sp'2052 (with VIX >16.28). The setup for Friday looks rather promising for the bears, and if the week does close on a particularly negative note, it certainly keeps in play the mid term bearish outlook across Sept/early Oct.

Friday will see Producer prices, indust' prod', consumer sent'. That should be plenty enough to give the market a kick... one way or another.
--


Not the best of days

For yours truly it was not a particularly great day. It had started well, good breakfast, a haircut, a visit to the bank. I posted my pre-market brief at 7am, and I even got one of my (usually intentionally provocative tweets) mentioned on Bloomberg. A storm front hit London city around 8am EST... thunder, heavy rains, 62f... not exactly a great summers day.


As the rains continued into the afternoon, then I get news my housing move had fallen through.. as the other side of the move had cancelled on me. Frankly, I'm pretty devastated.. it was a home in a place I had dearly wanted to be living before end summer.

The market had naturally weakened into late morning, with VIX battling into the 14s. From there of course... VIX melted to the low 13s. That sure wasn't great to see... although I can be rather patient when it comes to VIX trades. At least my entry is in the 14s and not the upper teens.. or even 20s.

In the late afternoon, a loud crash outside... as yet another set of vehicles collided a mere 20ft from my desk. For some hours thereafter it was then a case of 20/25 emergency crew cutting vehicles open.  I've no idea if they were pulled out dead or alive, and in many ways, I'd rather not think about it. Living next to an urban freeway is rarely subdued, and its one reason I want out of the city.

The closing hour of the trading day was at least something for the equity bears, and the setup - especially on the hourly cycle, bodes rather bearish into the weekly close.

As for the housing issue, I hope I'll eventually arrange to leave London city, but right now... it seems like I'll not get out (or should that be 'escape'?) until at least next spring.

On that depressing note of resignation... 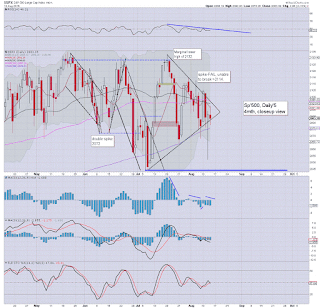 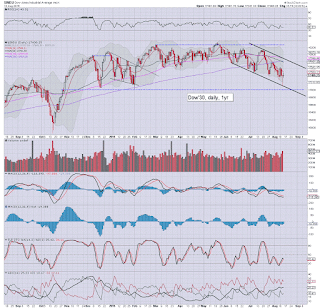 Market looks set for lower levels across Friday.. and perhaps into Monday.
--