*special note. Stockcharts have failed to update Japan, China, and Russia, for their last trading day of the month. The net monthly changes/settlements I've stated, take into account March 30'th.
-- 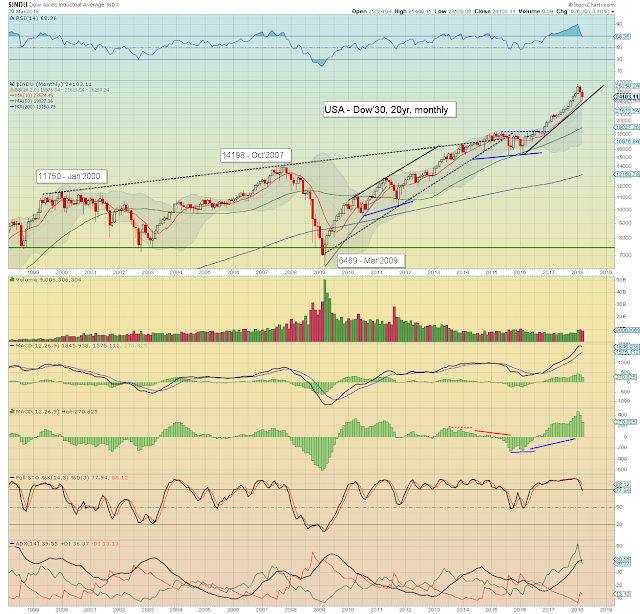 The mighty Dow settled lower for a second consecutive month, -926pts (3.7%) at 24103, with an intra month low of 23509, which was marginally above the Feb' low. Underlying MACD (green bar histogram) cycle ticked lower for a second month. At the current rate, we will see a bearish cross in May.

Best guess: early April weakness, but then a powerful push back upward into early summer. The ultimate issue is whether the Jan' high of 26616 will be taken out, or if we put in a lower high. Right now, I'm still guessing we do break a new historic high. However, some of the other world markets are provisionally suggestive the giant rally from 2009 is complete.

The March settlement was above the key 10MA at 23524, so under my criteria, we avoided a bearish monthly close by around 2%. In April, key rising trend will be around 23k. Any price action (even if briefly) <23k from April onward, would be confirmation that the rally from early 2016 is complete.
-- 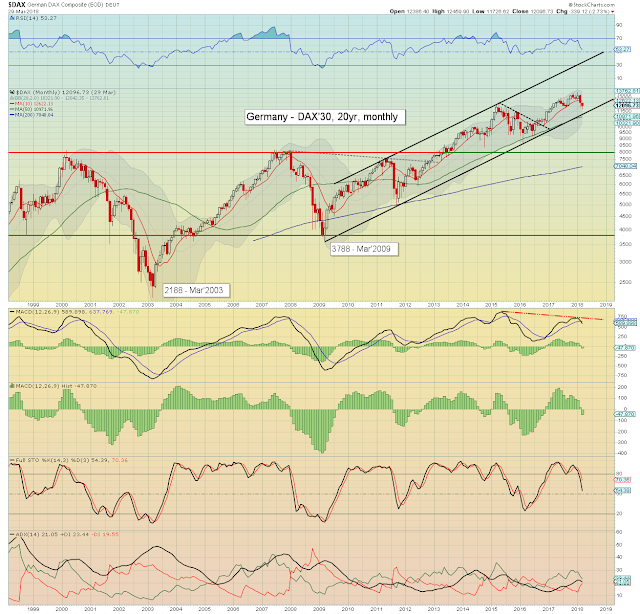 The economic powerhouse of the EU - Germany, saw the DAX settle lower for a second consecutive month, -339pts (2.7%) at 12096. This was the second monthly close under the key 10MA, and does merit provisional alarm bells. Note the MACD cycle, we have a bearish cross, as mid/long term price momentum now outright favours the equity bears. Further, note the lower macd cycle high in Jan'2018 to May 2015. This is pretty bearish, and warns that the grand rally from 2009 might have concluded.

Note the upward price channel trend, from April onward, support will be around 11300. Any price action <11k would be decisive, and offer a straight run to 8k. The 8000 threshold (33% lower) is of course a massively important level, as it was the giant double top for 2000/2007. 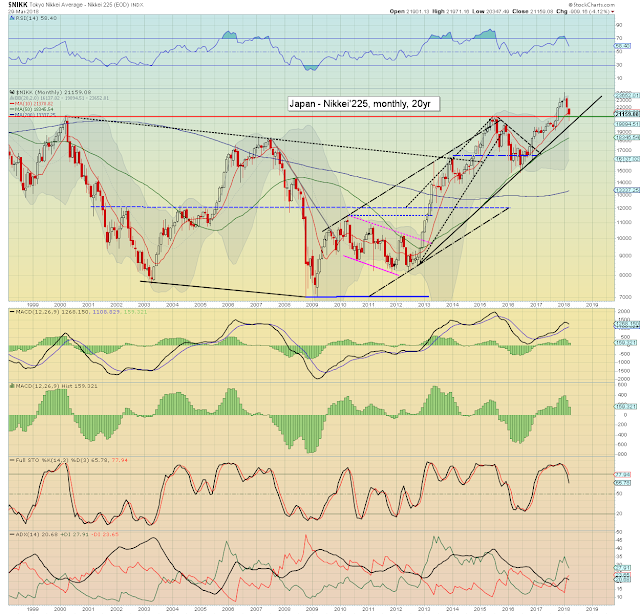 *chart not finalised. The Nikkei fell for a second month, -614pts (2.8%) at 21454. This was a clear 1100pts above the intra month low, and avoided a settlement under the key 21k threshold. Underlying MACD is due a bearish cross in April or May. Provisional alarm bells if <21k, with key rising trend - from 2009, which will be around 20k in April. 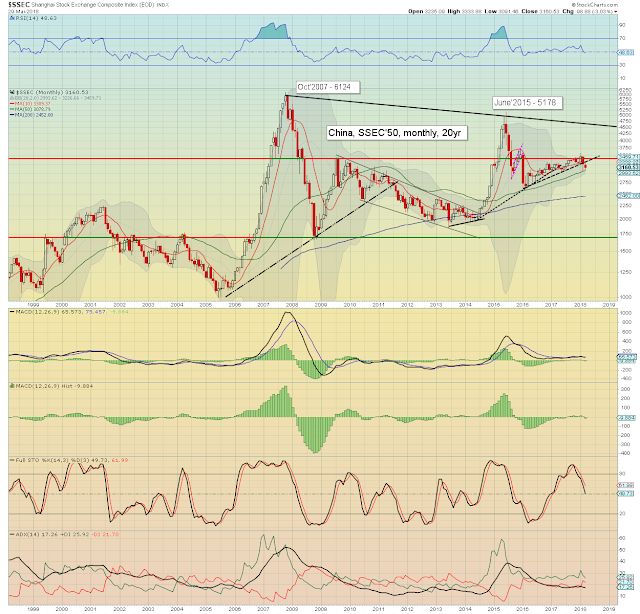 *chart not finalised. Chinese equities cooled for a second month, -91pts (2.8%) at 3168. This was the second monthly close under the key 10MA.Next major support is 3k. China bulls can only get confident if >3500s. 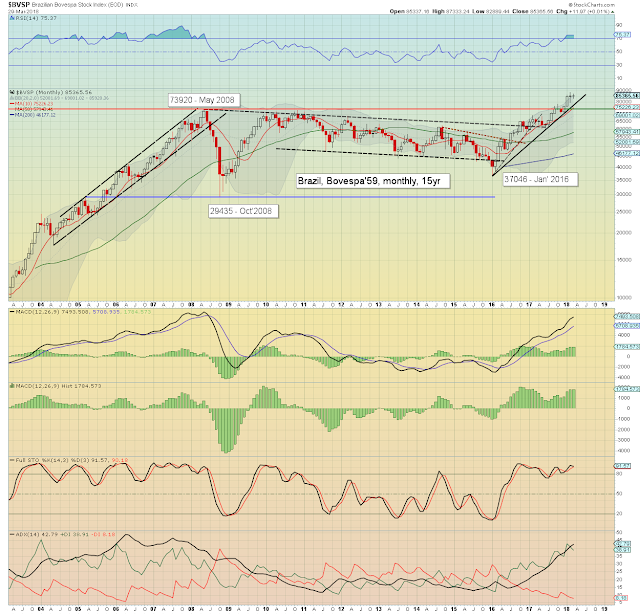 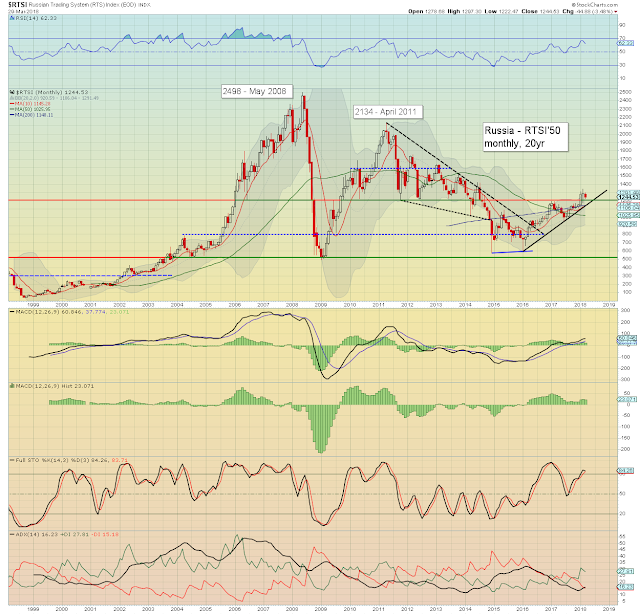 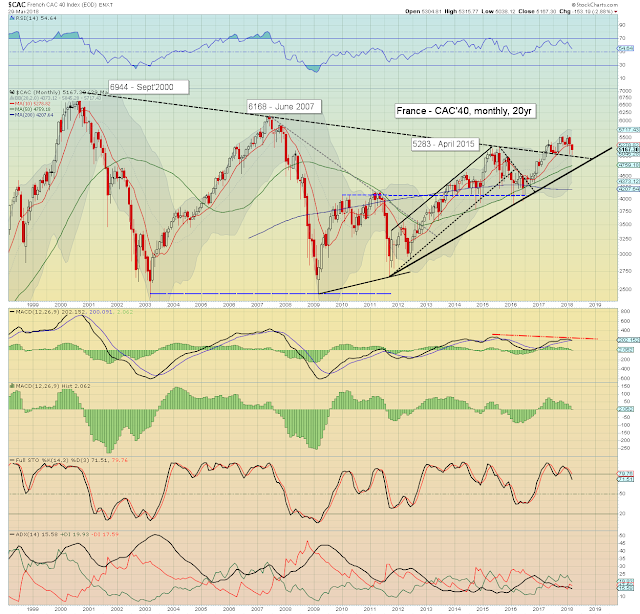 French equities cooled for a second month, with the CAC -153pts (2.9%) at 5167. The French market has become decisively stuck around 5500, and is effectively back testing the old declining trend. This was the first monthly close under the 10MA since Aug'2016. Any price action <5k from April onward would merit even louder alarm bells. 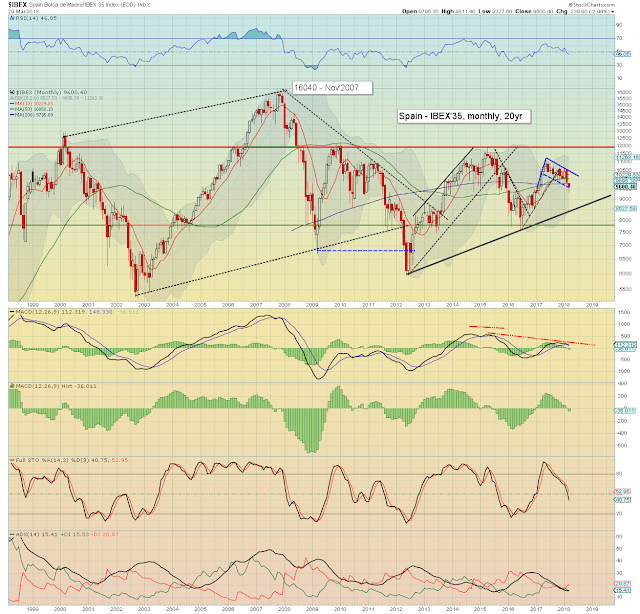 The ugliest of the EU PIIGS (we've not forgotten about that once popular term, have we?) - Spain, fell for a second month, -239pts (2.4%) to 9600. Price structure of a bull flag has been decisively negated. Any m/t hopes of a challenge of 12k are now on hold. Instead, first support is core rising trend from 2012, which in April will be around 8500.. some 11% lower. Note the MACD cycle, we have a bearish cross, with price momentum now outright bearish (if only fractionally). Further, note the lower macd cycle high of Oct'2017, relative to April 2015.

The next recession - whenever that might be, will see dormant/suppressed problems arise once more. We will no doubt see a renewed attempt by the Catalonians to break away from their Madrid masters. I have to wonder whether the political elite in Brussels are prepared for such an event, or just oblivious to what is arguably inevitable. 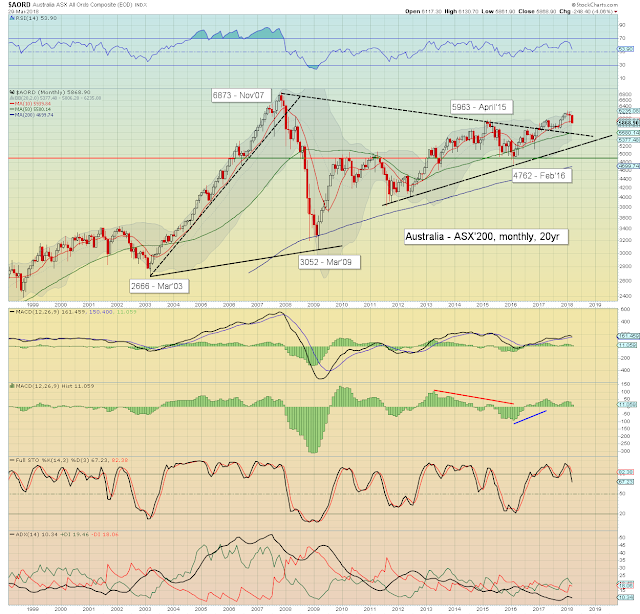 Australian equities cooled for a third consecutive month, with the AORD lower by a rather powerful -248pts (4.1%) at 5868, notably below the key 10MA. Soft support in April is another 5% lower around 5600. It is one market that is especially supportive of the view of early April weakness. 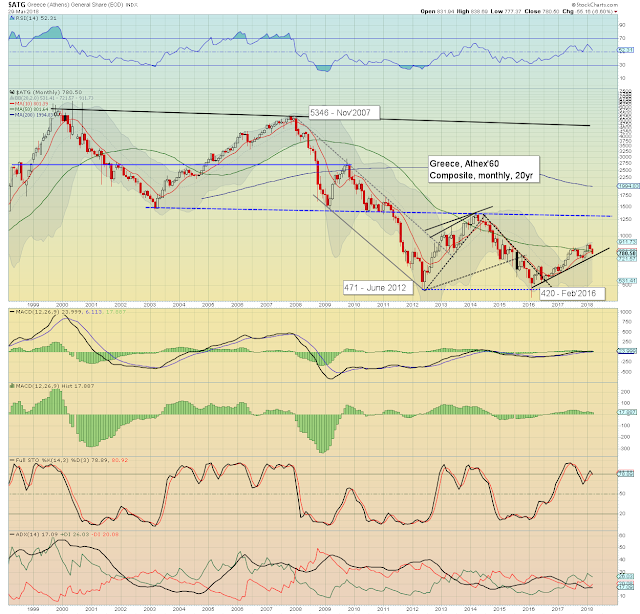 Interesting site to browse, not just for Greece, but the USA and UK.  https://www.nationaldebtclocks.org/debtclock/greece
--

A broadly bearish month for world equities, with nine markets net lower, whilst the Brazilian market was fractionally higher.

Six markets saw bearish monthly closes under their respective key 10MA. Of those, three (Germany, China, Spain) settled below the 10MA for a second month.

The US, Japanese, and Brazilian markets remain resilient.
--


The ultimate question: Is the giant rally from 2009 over?

Right now, there isn't remotely enough to declare that. We do have provisional alarm bells in a fair number of markets, but most of those are still holding the long term upward channel from 2009/12


A reader recently asked me, what would turn me bearish?

-A monthly close under the 10MA, not just for the US market, but the majority of other world markets.

-A key lower high. For the US, the market maxed out in Oct'2007, an initial wave lower to Jan'2008, and then a bounce to May'2008, notably failing at the key 10MA. That amounted to eight months. So even if you assumed Jan'2018 was the high, maybe we won't have a key lower high until around this August?

-GDP multi-quarter decline in growth... not necessarily having to be negative. GDP is a very laggy econ-data point, and it often takes 6-9 months to see revised data that actually gives clarity that the economy is falling into recession.

-ISM/PMI data. This data - especially Chicago PMI, I hold as second only to GDP. Further, the data is monthly, and arguably far less skewed. For now, the ISM/PMI data are well above the key recessionary threshold of 50.0.

-miscellaneous issues. In 2007, there were plenty of rather obvious warnings of economic trouble, such as bank failures. For yours truly, the finest example was the Northern Rock Bank, UK, in Sept'2007, where there were literally queues of people struggling to withdraw funds/close accounts, just a few streets from my apartment.

-the ultimate warning, the US fed cutting rates and/or halting the QT program.

We have some provisional technical warnings in a number of world markets. Fundamentally though, there is near zero sign of a recession. Further, in addition to the correctly anticipated March hike, I still expect a June rate hike, which by definition, is a sign that the economic/market train will remain on the tracks into the summer.
--

*there are a handful of fed officials on the loose, but none seem likely to be of any importance.
--