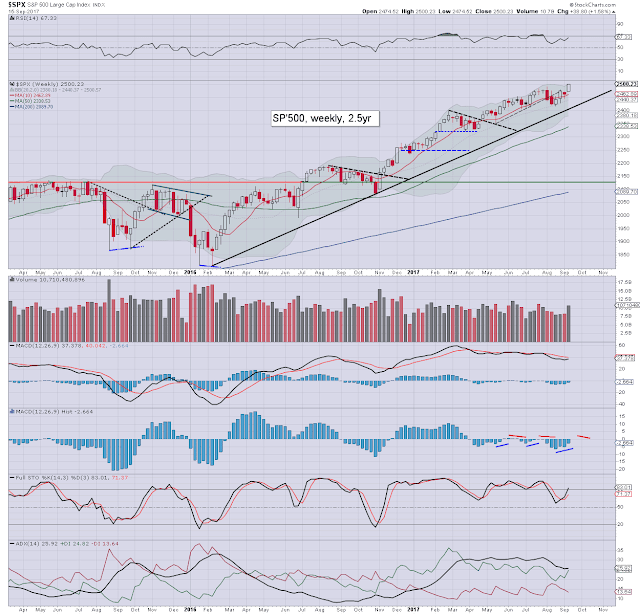 The sp' settled higher for the third week of the past four, +38pts (1.6%) to a new historic high of 2500.23. Underlying MACD (blue bar histogram) cycle ticked up, and will be close to the key zero threshold next week, ahead of the FOMC. Seasonally, the setup favours a swing lower, and a failure to keep pushing upward from the zero threshold would be especially bearish.

Best guess: minor chop ahead of the FOMC, then a sig' swing lower, stretching into early October. A 5% down wave would see the 200dma tested (currently 2375). Considering 'everything', the market should see a swing back upward into end Oct', avoiding a bearish monthly close. The year end target of 2683 looks a stretch, but its still just about possible. 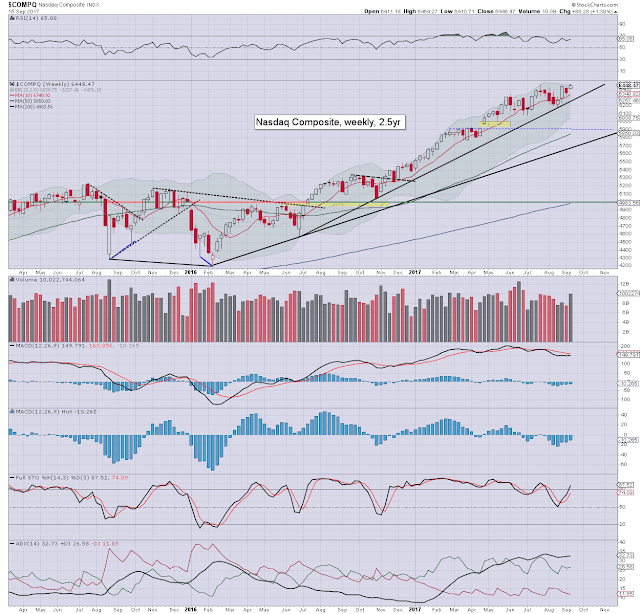 The Nasdaq saw a net weekly gain of 1.4%, breaking a new historic high of 6464. Soft rising trend will be around 6270 next week. Core trend from early 2016 is still a considerable way lower, currently in the 5600s, and by end Oct' near 5800. There are multiple aspects of support within the 6000/5900 zone. Any price action <5900 seems very unlikely for the remainder of the year. Its notable that some cooling into October would take 7k out of range until at least early 2018. 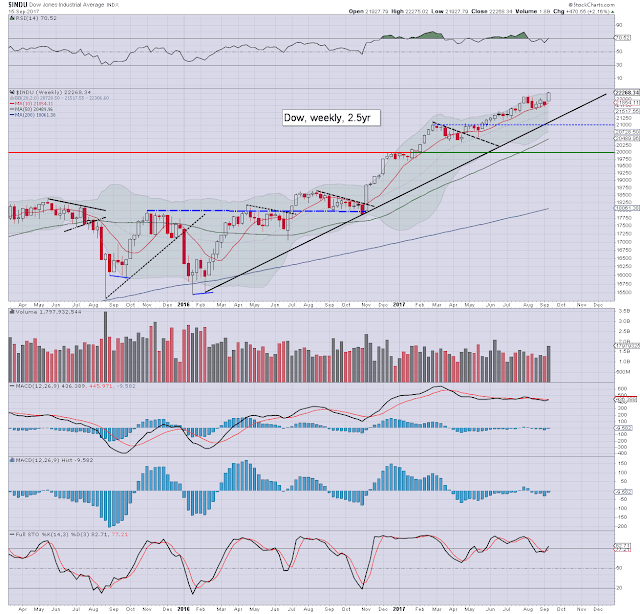 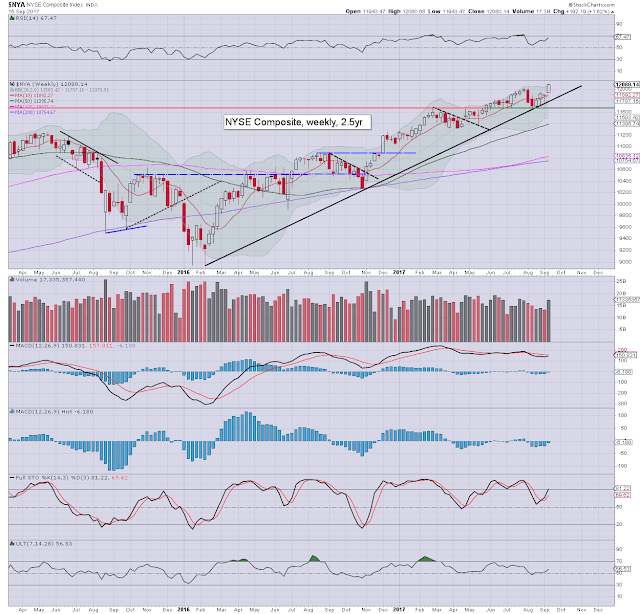 The 'master index' climbed 1.6%, breaking a new historic high of 12080. Underlying MACD is set to turn positive next week. A failure to keep pushing upward would be rather bearish, and offer a 5% down wave to around the lower bollinger in the 11500s. That would notably break the mid term trend from early 2016. Things would turn decisively bearish with a Sept' or Oct' close <11500, which would be under the key monthly 10MA. 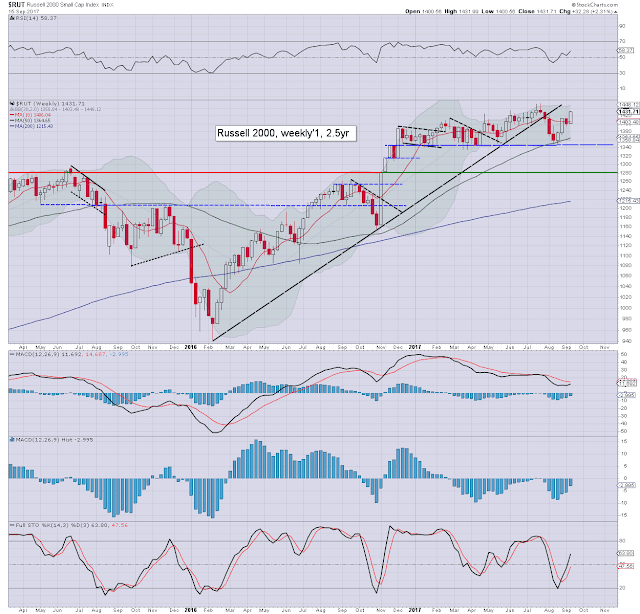 The R2K was the leader this week, +2.3% to 1431, just 21pts shy of the July historic high. Underlying MACD is set to be near the zero threshold next week, as price momentum is swinging back to the equity bulls.

Its important to note that the R2K was the first - and so far only index, to decisively break the mid term upward trend from early 2016. Any new historic high would negate the break, and offer the 1500s within a few months. For a bearish Sept' close, the bears only need to settle the R2K <1380, which isn't that far down. That 'break threshold' will climb to around 1400 for the Oct'31st close. 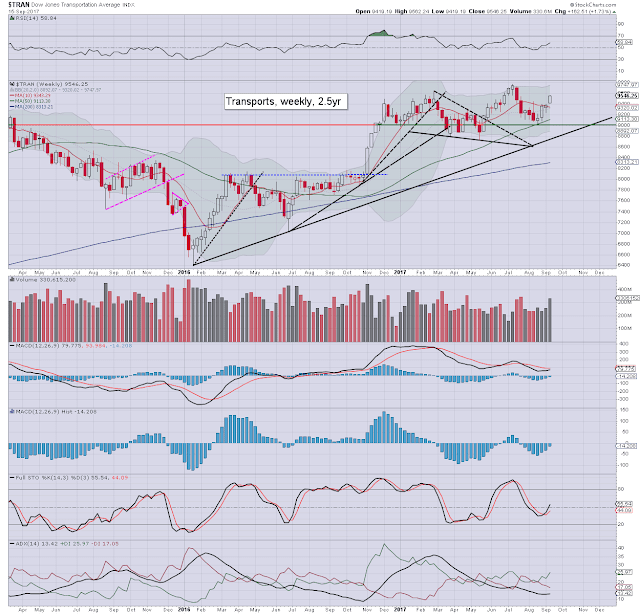 The 'old leader' - Trans, climbed for a fourth consecutive week, +1.7% to 9546, just 2.2% shy of the July historic high. Like other indexes, underlying MACD is set to be near the zero threshold next week. In theory, the tranny could climb for another 3-5 weeks. However, seasonally, the setup favours the equity bears. First big support is the 9k threshold. Things would only turn bearish with any price action <8800.
--

A very bullish week for all six of the main indexes, with a quartet of historic highs in the sp'500, dow, nasdaq comp', and nyse comp'.

The Trans and R2K continue to lag, although both are only 2% from breaking their July historic highs.

The R2K remains the one index that decisively broke the mid term upward trend - from early 2016, but that issue would be negated with a new historic high.

Five indexes (R2K being the exception) have around 5% of downside buffer before doing any real damage to the mid term trend.
--

The FOMC announcement will be at 2pm. No rate hike is expected. Its also unlikely that QT (quantitative tightening) will begin until at least December. There will be a Yellen press conf' at 2.30pm, and that will likely last an hour.

*In addition to Yellen on Wednesday, there will be 3 fed officials on the loose on Friday, notably - George and Kaplan, at a conf' discussing global oil supply/demand.
--