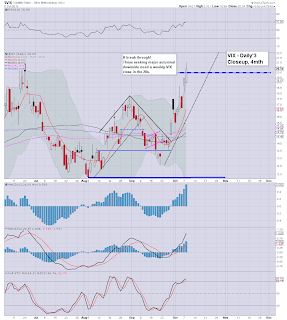 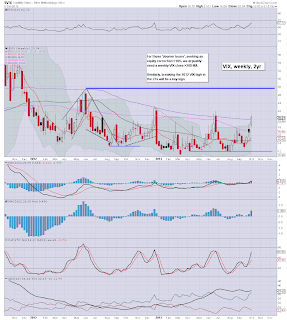 What would be real interesting is if the market really gets rattled, with a break <sp'1627, and that might be enough to at least get the VIX into the mid 20s. The 2012 high of VIX 27 will be tough to break.

Just reflect on the fact that when VIX was 27 - in June 2012, the sp' was...1266.
--
more later..on the indexes
Posted by Trading Sunset at 23:00:00
Email ThisBlogThis!Share to TwitterShare to FacebookShare to Pinterest

The main indexes closed significantly lower, with the sp -20pts @ 1655. The two leaders - Trans/R2K, saw heavy falls of -1.4% and 1.7% respectively. With no shutdown/debt ceiling agreement likely in the immediate term, the current down trend looks set to continue. 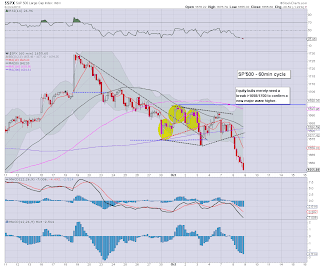 For those on the short side, another pretty reasonable day. Certainly, the declines we're seeing in the indexes are not dramatic yet, but we're now a fair way lower from the FOMC 1729 high.

The levels/targets are clear for the bears...

So..another day for the equity bears, and with no sign of an agreement this week...the bears should be able to push the market lower all the way into the weekend.

Boehner speaking, is not helping..and the sp slipping another 2-3pts..so the 1640s are already real close to being hit.
Posted by Trading Sunset at 21:01:00
Email ThisBlogThis!Share to TwitterShare to FacebookShare to Pinterest 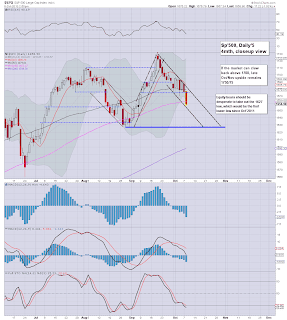 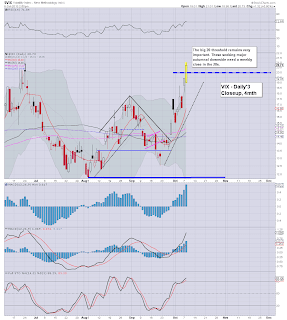 Suffice to say...the bears now have the daily and weekly cycles in their favour. The Dow will flip negative on the monthly cycle in Nov'..even if it doesn't fall any further this month.
-

With no agreement in sight..there is little reason to believe the broader (if not exactly dramatic) falls will continue for the rest of this week.
-

3.26pm ...hourly index cycles trying to put in a floor..but even the 1670s will do nothing to counter the main down trend. 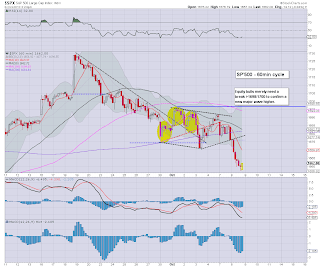 
3.52pm.. Rats selling into the close. Who wants to be going long right now, with no agreement in sight?

VIX peaked 21.01...should just about hold the 20s into the close..although surprisingly we're only talking about a daily gain of around 4%.
Posted by Trading Sunset at 19:52:00
Email ThisBlogThis!Share to TwitterShare to FacebookShare to Pinterest

The main indexes remain very weak, and the declines are starting to become significant, with the sp' failing to hold the 1660s. VIX is comfortably holding above 20. Meanwhile, the momentum (momo) stocks are getting smashed, many with declines of 5%. 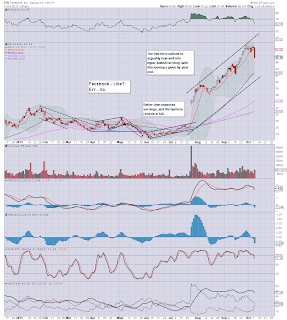 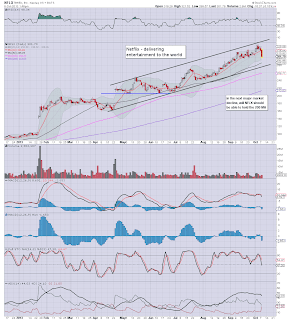 They all broke this morning, when the sp' failed to hold the 1670 level.

The daily charts for all of them..bode for further declines tomorrow.

Q. How much of a market upset do the political maniacs need to motivate them to reach an agreement? 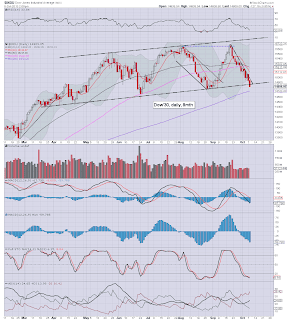 ..considering its only Tuesday, and those political maniacs look unlikely to do anything until the tail of next week..serious technical damage looks likely.


2.32pm.. King O' not exactly inspiring the US markets, same old political-speak.
Posted by Trading Sunset at 18:54:00
Email ThisBlogThis!Share to TwitterShare to FacebookShare to Pinterest

US equities are showing another day of moderate declines, with the sp' having now broken the 100 day MA of 1662. Despite any intra-day bounces, momentum is clearly with the bears, and even the weekly index/VIX charts are flashing major warning signals. 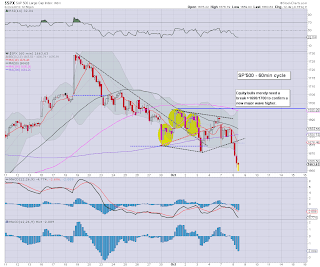 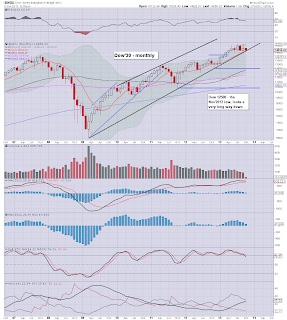 *Dow is especially weak as many realise, but on the monthly chart, you can see the importance of the Aug' low.

A Dow break <14500..opens up another 2000pts lower, which is certainly a target bears currently have in mind. 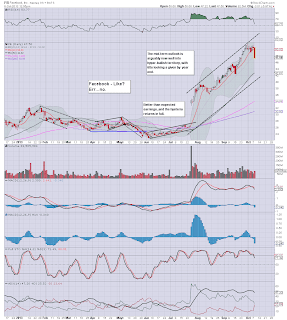 along with NFLX, TSLA...the usual suspects.
Posted by Trading Sunset at 17:54:00
Email ThisBlogThis!Share to TwitterShare to FacebookShare to Pinterest

12pm update - no buyers before an agreement

The main indexes are moderately lower, with the sp' testing the 100day MA of 1662. Primary target for the doomer bears should be a break of the 1627 low, which if taken out, would break the two year trend of higher highs..and higher lows. VIX has broken into the 20s..first time since June, when sp' was 1560. 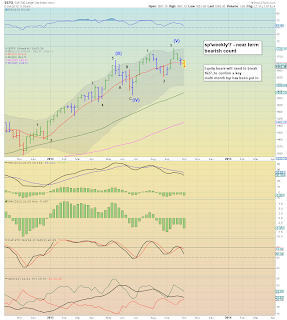 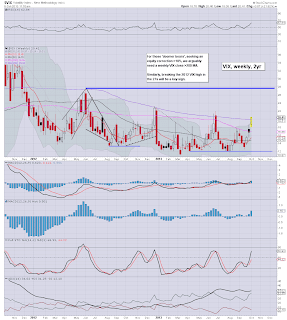 *rather than get lost in the noise of the smaller cycles..for this hour...consider the broader weekly charts..both of which are now turning to the bears.
-

More than anything, equity bears should seek a weekly VIX close in the 20s, along with sp <1627, although the latter seems unlikely this week.
-

For those short...congrats. Looks like a few more percent lower to come, lead by the Dow, which is only 0.6% from breaking the August low of 14760.
Posted by Trading Sunset at 16:55:00
Email ThisBlogThis!Share to TwitterShare to FacebookShare to Pinterest

The main indexes are moderately lower, with the sp' breaking below the recent 1670 low. Buying interest looks set to remain near zero until an Obama/Boehner agreement is reached, and that doesn't look likely until next week. Despite further equity declines..VIX is slightly lower. 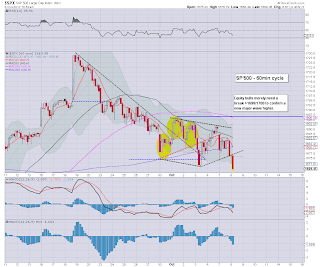 Notable breaks lower.. in the momo stocks of FB, TSLA, and NFLX.
--

For those watching the bigger charts..with the break <1670..the weekly charts are turning outright bearish... 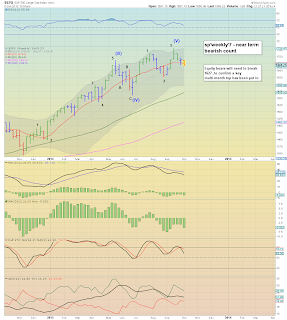 Were that to fail to hold..then it would clarify that the rally from the Oct'2011 low...has likely ended.
- 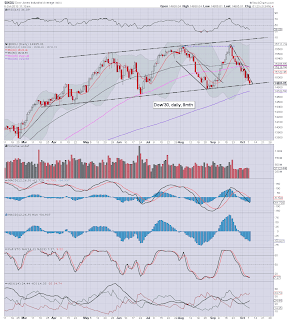 Without question, a break into the 14600s..will be a provisional signal of real trouble. Will similarly need to take out the sp'1627 low though..to confirm it.

Now...the issue can the VIX close in the 20s. Next soft target is the June high of 21.91.
Posted by Trading Sunset at 15:53:00
Email ThisBlogThis!Share to TwitterShare to FacebookShare to Pinterest

The main indexes are moderately lower, but the sp' is holding just above the recent key low of 1670. Equity bears really need to break into the 1660s this week to maintain the moderate downside momentum. Metals are turning a touch higher, with Gold +$4. 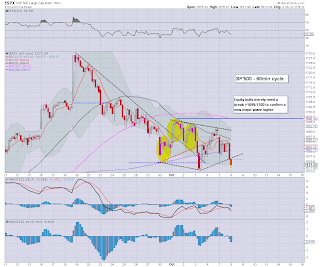 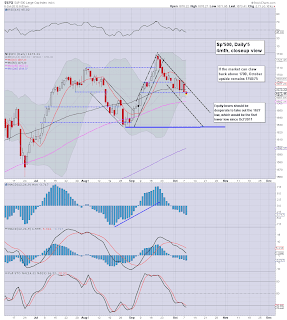 So, a touch of minor weakness, but certainly, there isn't much downside power right now.

Despite the opening equity declines..VIX is already red. However - without sounding permabullish (gods forbid!), VIX probably needs to cool back into the 18s..at least for a few hours. 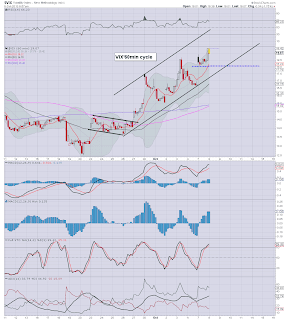 The 20 threshold remains a very tough level to break/hold over.
-

Notable mover...STX, which is becoming something of a personal favourite in the tech sector. 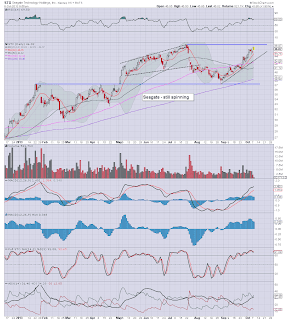 Keep on spinning! Ohh, and yes..if the main market unravels..STX will likely put in a double top..at least in the short term. Regardless, relative to the rest of the main market, its under valued by at least 50%
-

10.20am.. On the hourly index charts..market trying to put in a spike-floor. Bulls need 1678/80. Underlying cycle looks pretty much exhausted on the downside, at least for a few hours.

Could turn out to be a very quiet day. Next major thing is the FOMC minutes, Wed' 2pm.

Next level is 1667/65
Posted by Trading Sunset at 14:57:00
Email ThisBlogThis!Share to TwitterShare to FacebookShare to Pinterest 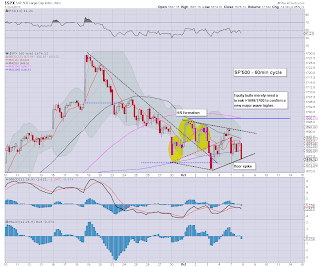 A rather quiet overnight futures session, and it looks like we're going to open effectively flat.

There really isn't anything to add to what was already noted in the overnight closing post.

The VIX will very likely be a key signal to watch. It has been a very long time since we had a series of daily/weekly closes in the 20s (or higher).
--

*I'm tired of meddling in the indexes, and will likely leave them alone until after the debt ceiling is resolved. I'm currently just short SLV, and will trade that in the days ahead.


Posted by Trading Sunset at 13:37:00
Email ThisBlogThis!Share to TwitterShare to FacebookShare to Pinterest

Whilst the last nine trading days have remained in a narrow trading range of around 2%, the broader weekly index charts are still generally bullish. If the current price structure is indeed just another bull flag, equity bulls should be seeking 1750/75 once Obama/Boehner can come to an agreement. 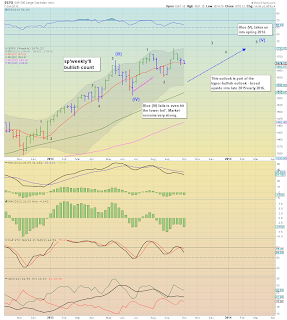 It was something of an interesting day, but still, many indexes declined by less than 1%..not exactly significant falls. Then there is the issue that trading volume remains very low. I would agree that volume is low most of the time anyway, but still, the point is...there isn't any panic/significant selling.

The current weekly rainbow chart is offering a second blue candle. I think bulls need sp'1695 to turn it green, whilst bears probably need 1660/55 to turn it red.

A weekly red candle in the 1650s would most certainly at least suggest an attempt on the key low of 1627. If that low is taken out, it would END the series of higher highs and higher lows...that we've seen from the Oct'2011 low of sp'1074.

More than anything, those seeking much lower equity levels of sp'1500/1400s within the remainder of this year, need to see a VIX that can hold the 20s for longer than a few hours. For the past 15 months, the VIX has occasionally broken into the 20s, but it has always been a brief affair. 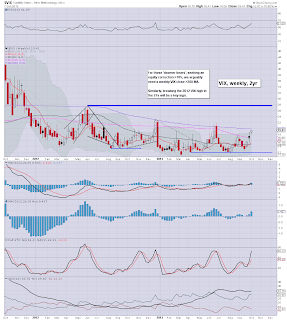 There really isn't much tomorrow, aside from a few of Fed people whose comments might motivate the market..a little.

*the next sig' QE-pomo is not until next Tuesday.

--
*I exited index shorts this morning, and frankly, am tired of meddling with the indexes. I might just leave the main market alone until after the debt ceiling is out of the way. I realise..many of you out there probably feel the same.

To conclude the day, here is a little news story that won't get much attention, but is probably one of the bigger issues that most people will be whining and bitching about if it happens this winter

It remains lame that each year the UK - and indeed most other western nations, live increasingly on the edge of power loss. To think that with just a week or two of 'winter cold', and the UK grid will struggle to provide enough power to the general populace.

Hell, if we ever do have a winter like the 1960s (not that I was around then), then large parts of the UK will be without power for up to half of the day. I guess you could say I'm bullish batteries and blankets.
--

The trendline that Oscar highlights is certainly important, but infinately more important is the actual low of sp'1627.
--

The main indexes closed moderately lower, with the sp -14pts @ 1676. The two leaders - Trans/R2K, both closed around -1.1% lower. Near term trend remains weak, but the bears are still struggling to put in any consistent downside price action. 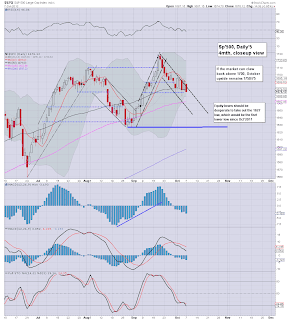 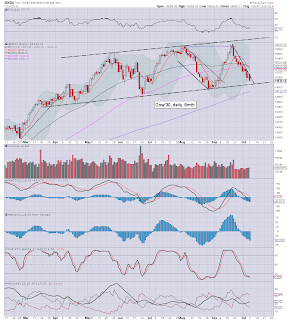 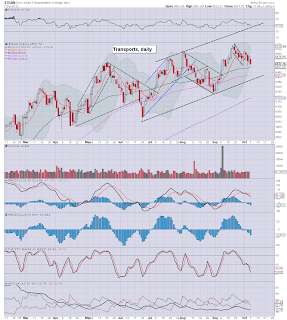 The overnight futures were somewhat interesting, and indeed we opened in the mid sp'1670s, but then..the usual intra-day bounce of around 10pts really smeared what was initially a bearish open.

The closing hour was certainly weak, but trading volume remains very low, and equity bears are a very considerable distance from breaking key low of 1627. Only if that low is broken..and held under, can the equity bears have real hope for much lower levels this autumn.

Considering the recent price action since the FOMC high of 1729, the bears are going to struggle to break much below 1660.