In Wednesday's edition of Capital Account, Chris Cole of Artemis Vega Fund highlighted a very interesting correlation, that of market volatility and the US Dollar. The key issue is that a stronger dollar - more often that not, would be indicative of higher market volatility.

As is usually the case, Capital Account is well worth watching, especially this episode, hosted by Lauren Lyster

Okay, now you've seen the show (I hope) lets take an overview of the USD, with VIX (overlaid in charts 1 and 3) 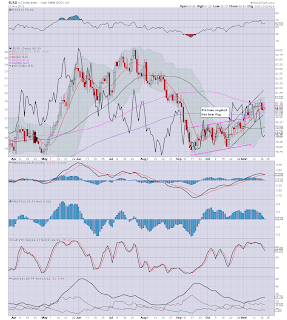 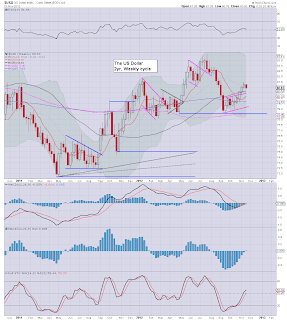 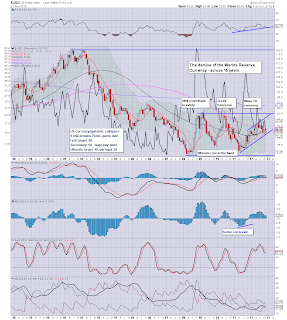 Starting with the daily chart, I want to particularly highlight the issue of when I believe wave'1 did indeed begin - October 18'th. That was also where the Dollar began a new up cycle, and the VIX also made a leap to the upside.

Interestingly, the VIX is arguably now lagging behind the dollar. Yes, the $ has been ticking lower in recent days, but I'm guessing that it is just a minor wave'2 retracement (with a corresponding wave'2 bounce in equities).


The big monthly historic chart is the most illustrative of all.

You can see a very broad positive USD/VIX correlation in this chart, that spans the last 15 years. One notable feature is where the VIX floored in early 2007, which was a full year before the USD floored. Once the dollar did finally turn upward in 2008, the VIX accelerated, and eventually went nuclear, rising (briefly) into the 80s.

Those seeking lower equities need a higher $, and that should also translate to a much higher VIX

The broader trend on the $ - at least on the monthly charts is still upward, so equity bears do have a chance in the mid-term. However, if we break into the USD 77s, that would wreck the trend, and be suggestive of another wave of higher prices across most asset classes - most especially in equities and the precious metals.

All paper currencies are of course forever losing value each year - not least with the increasing amounts of QE (aka, insane money printing) in recent years. What still seems likely across the longer term (3-7 years) is the Euro will fail first, and the dollar will indeed be the last piece of dirty paper to catch fire. The wild card is the Japanese Yen, where - as quite a few are noting, the debt/GDP ratio is beyond nightmarish levels, and a currency/bond market collapse is viable at almost any time.
---

*The Vega Fund is part of the Artemis group that came up with this classic VIX/Equity market historical overview. Enjoy!

back later in the day...where I will probably look at WTIC Oil.
Posted by Trading Sunset at 15:15:00
Email ThisBlogThis!Share to TwitterShare to FacebookShare to Pinterest

A small bounce, as part of a bigger down wave

Wave counting is a very imprecise guessing game at the best of times. The present time is even more tricky than normal, with two deeply opposing forces soon to meet. We have the seasonal 'Santa rally' vs the 'fiscal cliff uncertainty'. 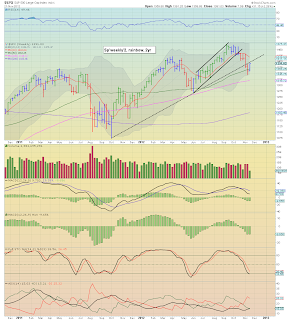 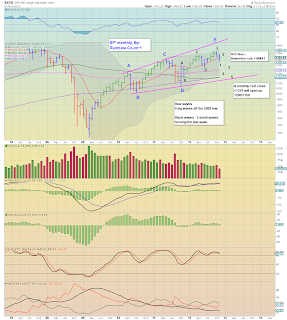 The weekly rainbow chart is now sporting a very clear blue candle, warning of a change of trend. That candle could be green by the Friday close if we break into the 1400s.

The monthly chart outlines my broad bearish scenario. It would of course need to get thrown out, if we break the QE high of sp'1474.


Santa vs the cliff

As many have come to recognise, it sadly seems the US politicians are again going to fail to reach an agreement, and that we will likely go over the cliff. Such tax rises and spending cuts would most certainly result in a very significant recessionary Q1 2013.

Hwoever, if the market gets upset, and takes out the sp'1343 low, and declines hard into the sp'1200s BEFORE Christmas, then I believe the politicians will get spooked..and be 'pushed' by Mr Market to reach an agreement before New Years day.
--

My best guess - we will see a 5 wave decline into the early Spring, flooring somewhere in the low sp'1200s.

That's it for today. I will post something this Thursday, probably on the $ and/or WTIC Oil, both of which are always hugely important factors.

The main indexes saw the algo-bots take command, and melt the market upward into the thanksgiving holiday break. We are now just a trading day or two away from hitting the low end of the primary target zone of sp'1410/25. 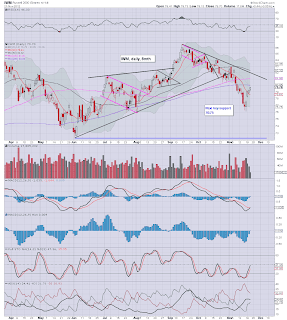 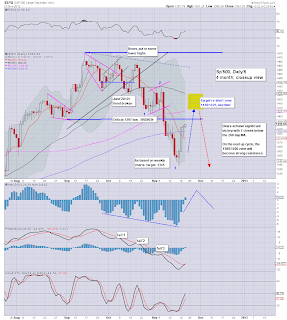 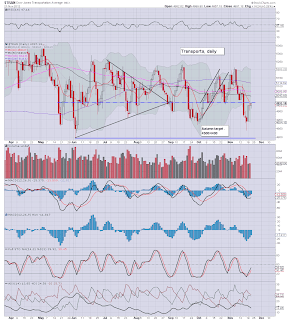 Lets start with the tranny, which closed very near the big 5000 level. This remains a key level, and I do expect the tranny do make a move to 5100 or so next week. The mid-term target remains 4500 or so, which would equate to the low sp'1200s.

My best guess..we will see the indexes max out by next Thursday, and perhaps see the first sign of rollover on Friday Nov'30.


Wave'2 continues into next week

So, lets be clear, I believe this is some sort of wave'2 bounce, with everything from Oct'18 - to last Friday, a wave'1 down. We won't have 100% confirmation of that though, until we take out the recent sp'1343 low. Once that happens, we'll know we are in a swift and fierce wave'3 decline.

The big unknown remains whether the market can be held up - trading sideways into January, before the next major down wave.