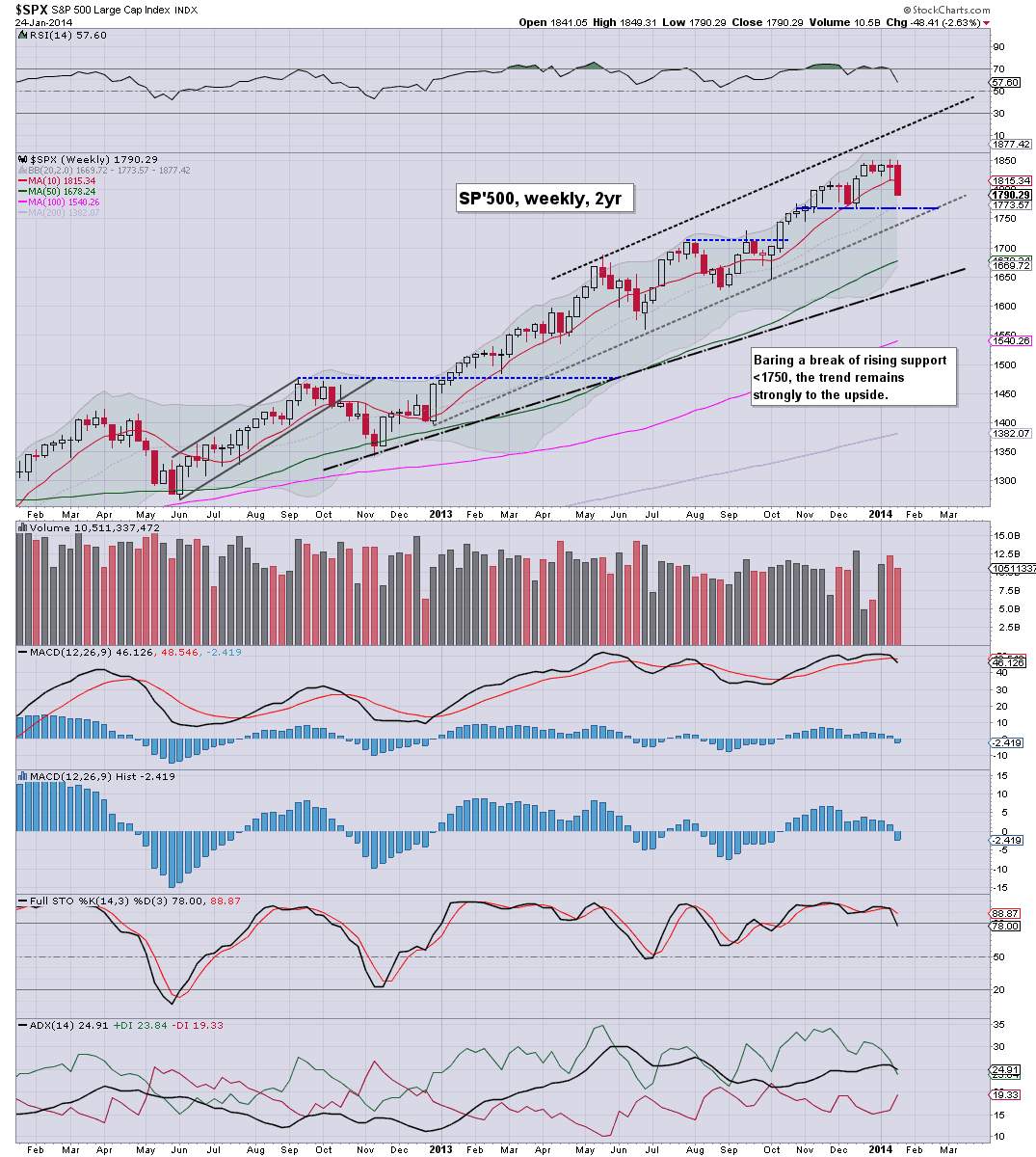 There is very strong multiple support around 1750, and frankly, I don't see the market going below there in the current wave. 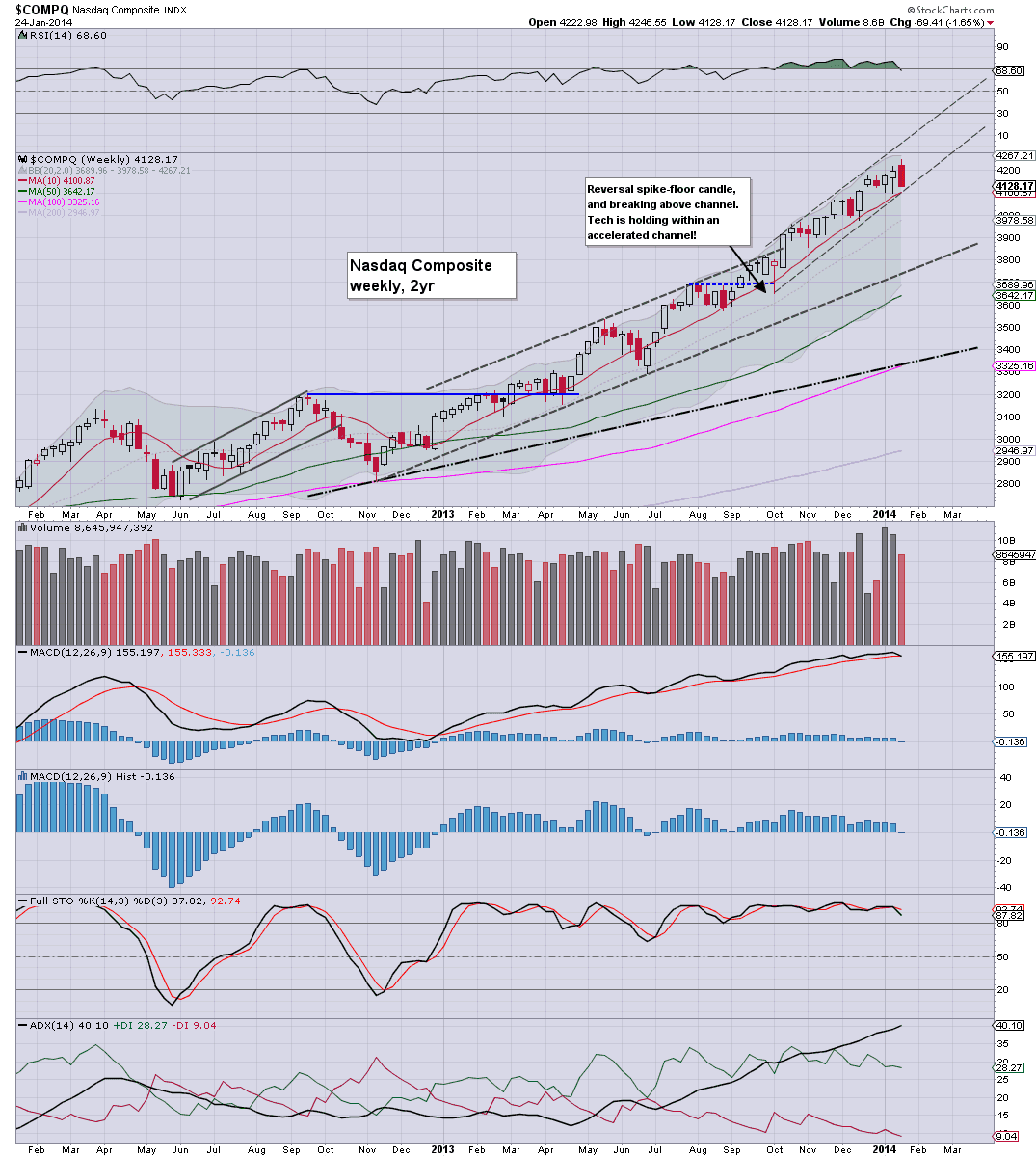 The tech slipped -1.6%, but still holds within the accelerated up trend. There is reasonable chance of downside to the big 4000 level within 1-2 weeks. Baring a key multi-month top already being put in, I'd expect the Nasdaq to stabilise there. 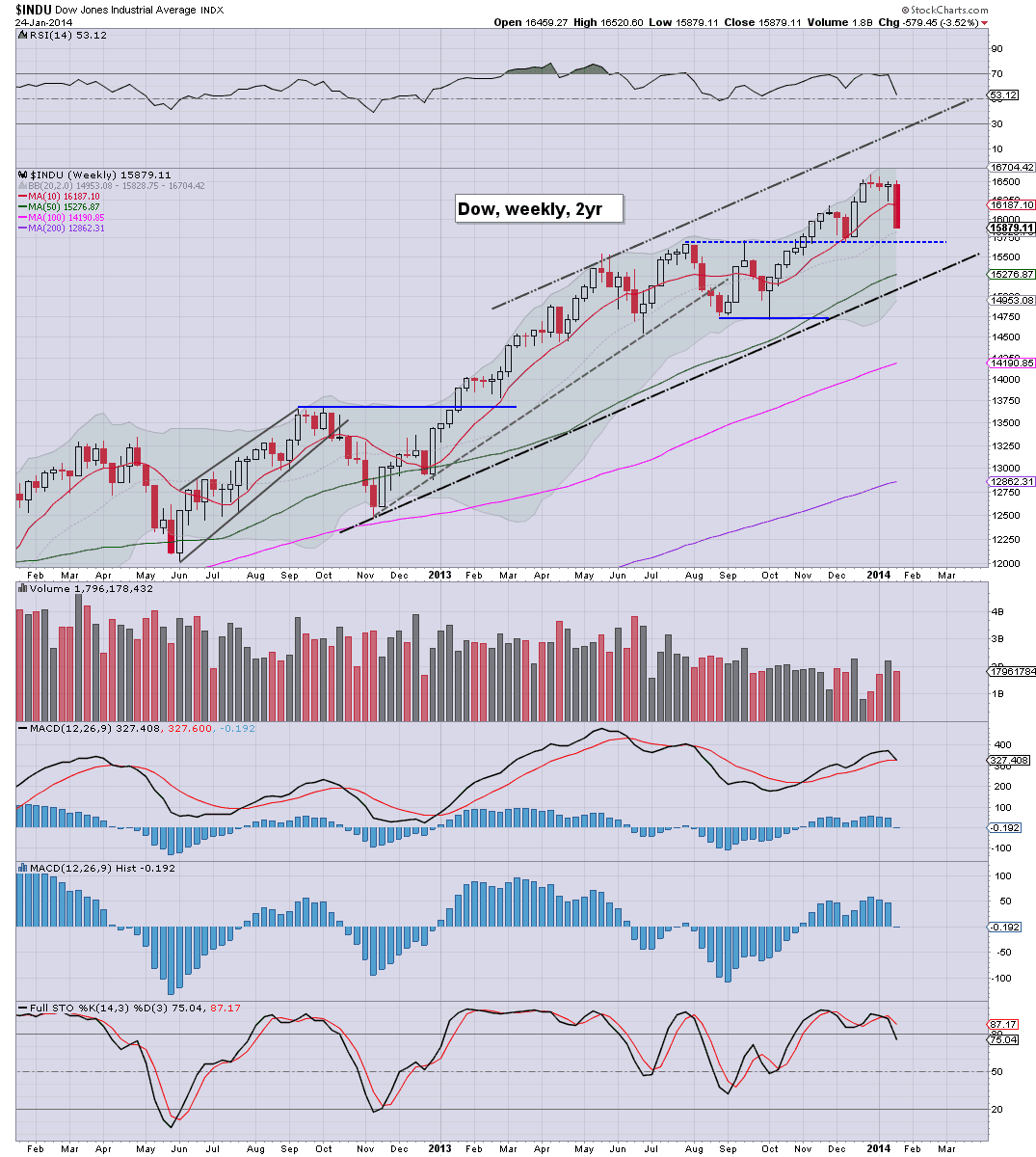 The mighty Dow fell a very significant -3.5% this week, and the weekly candle sure bodes for further downside into February. Next key support is the 15700/500 zone - where the 200 day MA also lurks. By end of next week, the lower weekly bol' will be around 15300. Were the market to fall that low...that would really change the bigger picture. 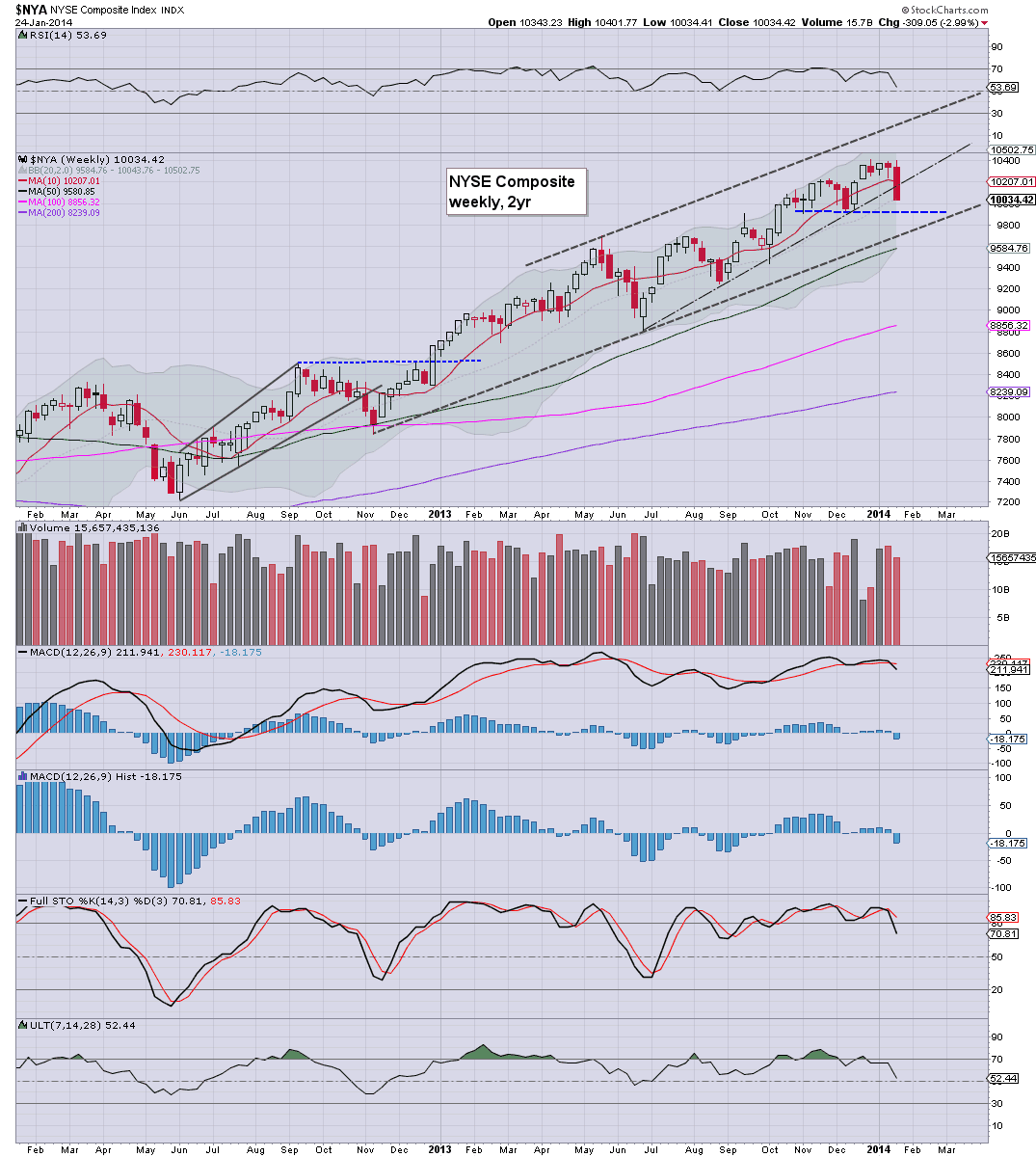 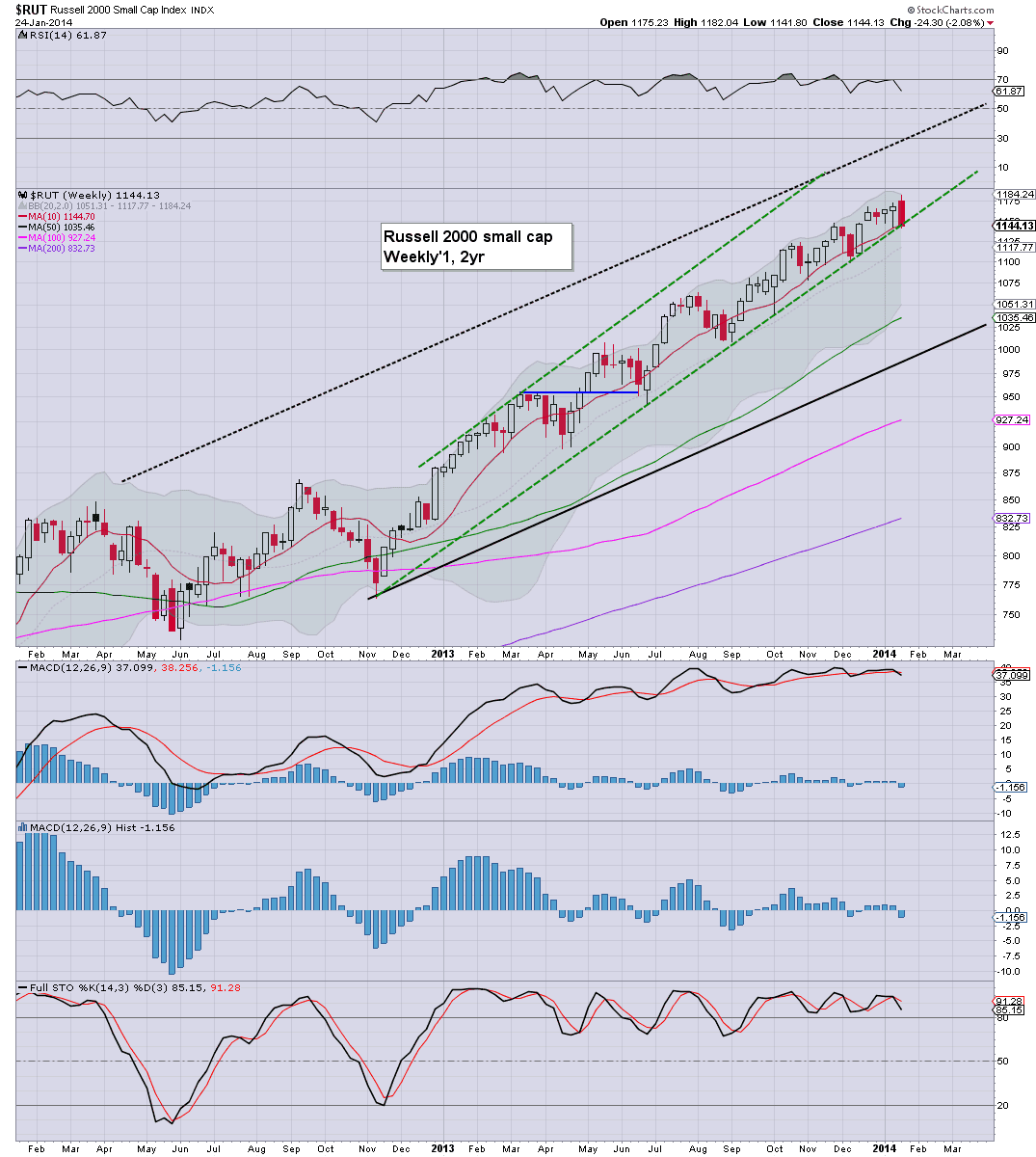 The second market leader lost -2.1% this week. The weekly close is a borderline break of the huge up wave that extends all the way back to Nov'2012..so this is a pretty huge issue. All things considered, I'd expect further downside, to around 1100/1075 in the next 1-2 weeks. 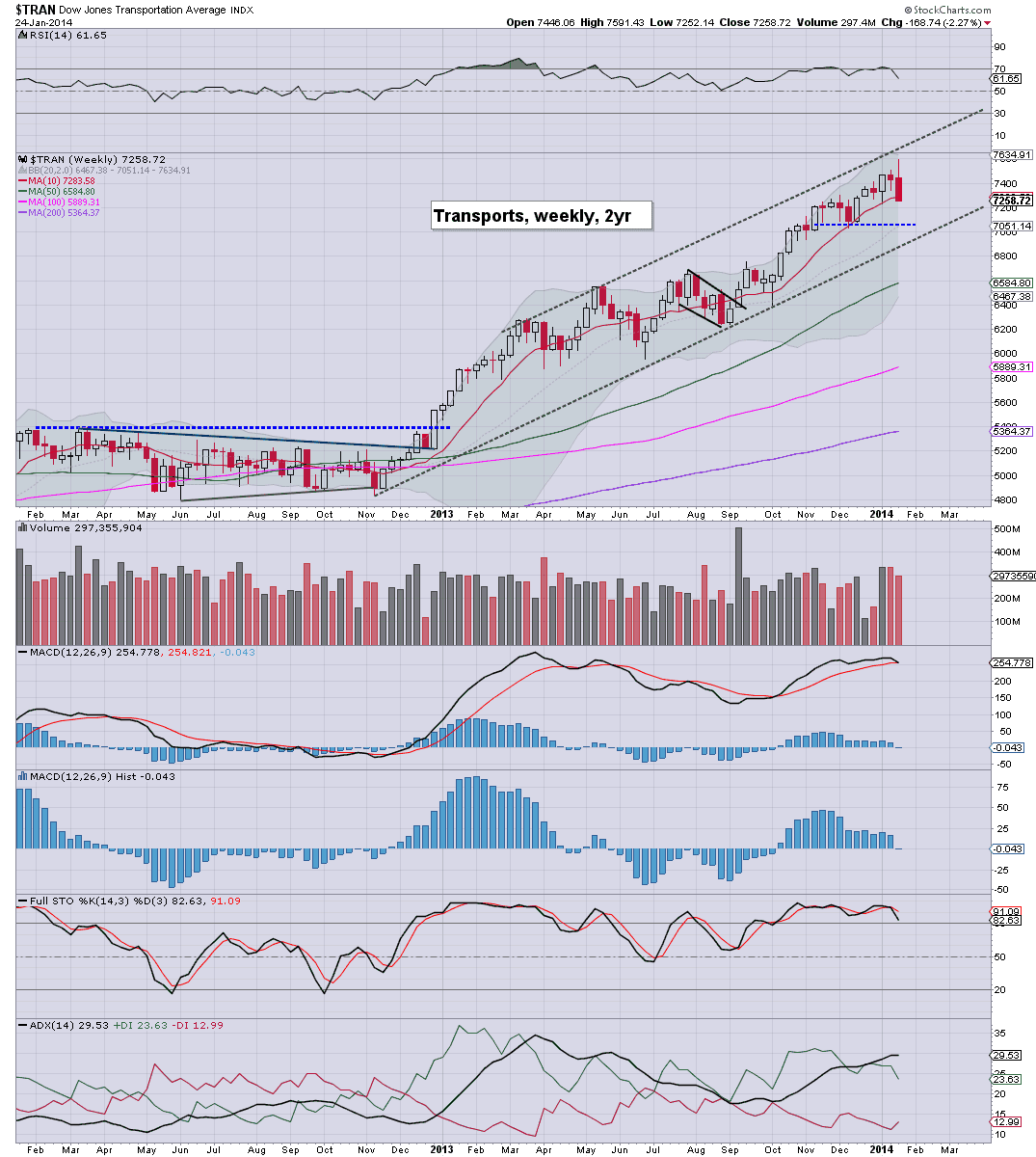 The tranny slipped -2.3% this week. However, this is masked by the fact that whilst the main market slipped on Thursday, the Trans actually managed a historic new high of 7591. The Friday decline itself was a very powerful -4.1%. Next key support is around the big 7000 level, that is 3-4% lower.

Unquestionably, it was a week for the bears, with the biggest two day decline since May'2012. This market sure is quirky though. The new historic high in the Transports ranks as a truly weird occurrence, whilst the broader market was very weak on Thursday. That issue has been negated though, with the very big Friday drop.

Considering the weekly close, there looks to be a further 3-4% downside for most indexes across the next week or two. Many other chartists/analysts are also now touting the sp'1760/50s as a key level where the big-money buyers will likely pile back in.

The following remains my best guess. Baring a hit of the lower weekly bollinger in the current wave, I will hold to the original outlook of further broad upside into the late spring. 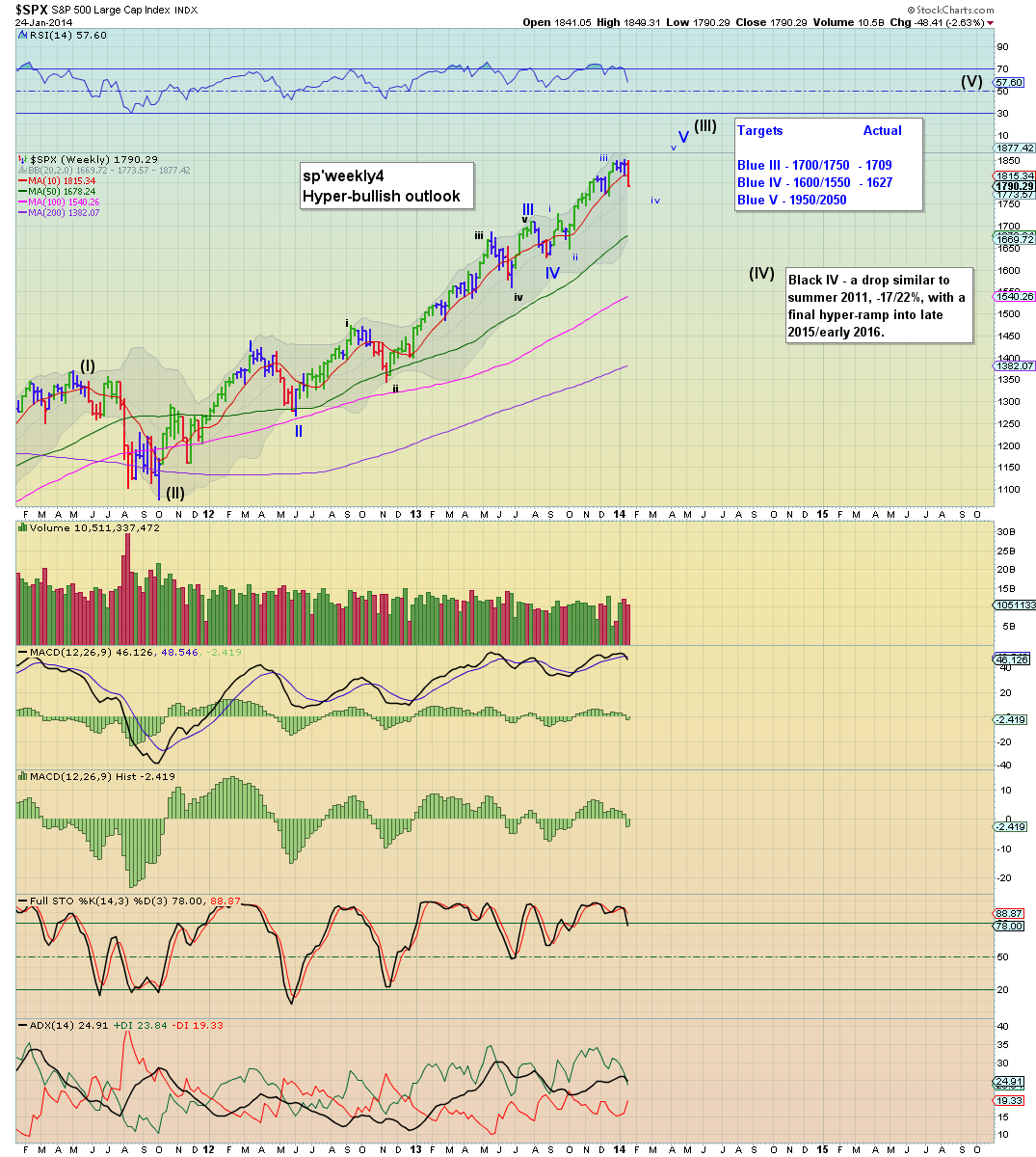 Next week will be a busy one. Monday begins with home sales.

Wednesday will be the highlight of the week, with the latest FOMC announcement. From what I gather, there will not be an afternoon press conference. The first Yellen press' conf' is due at the subsequent FOMC of March 19th.

Thursday will see the first estimate for Q4 GDP.

Friday concludes with an array of econ-data, inc' Chicago PMI, and consumer sentiment.


A dynamic week ahead

With the first red candle on the 'rainbow' (elder impulse) weekly charts, the week sure did end with a bearish bang. The week ahead will most likely be equally as dynamic. No doubt, at some point we're going to see some very strong up waves. As ever, the only issue is whether the bounces put in a lower high...and right now, that would be my guess. A back test of the old broken floor of sp'1815 would be pretty normal, before further downside to 1780/60 by mid February.

Has the grand wave from Oct 2011 completed? 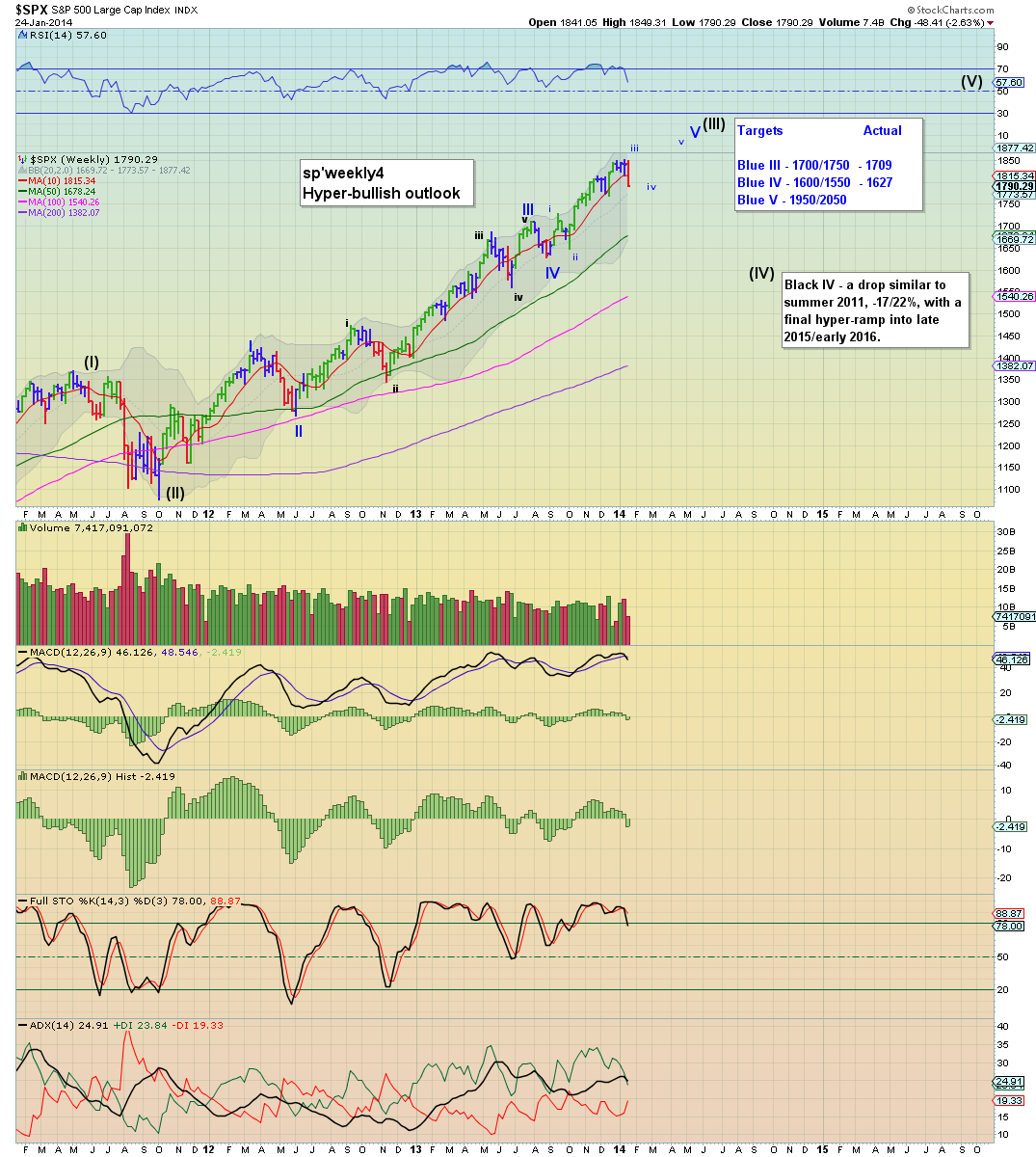 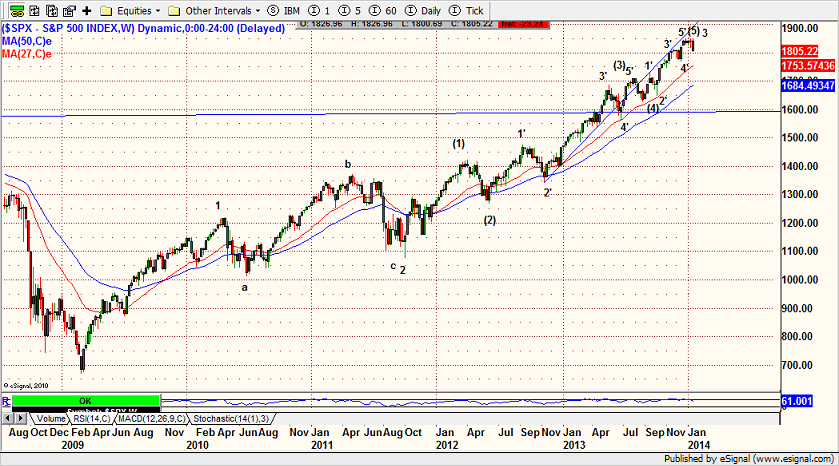 I was kindly sent the second chart earlier today by poster 'Witold', and it has certainly made me reconsider the notion that the top of the current grand wave - from Oct'2011, is already in.

My own original outlook was that we would see 'broad upside' into the late spring (certainly, bulls still have seasonal factors in their favour), with a target zone of sp'1950/2050. However, I could be wrong, and I do genuinely try to keep an open mind, despite having a primary outlook that I'll highlight almost every day.

I think we'll know..if..and only if, we come VERY close - within 5/10pts..if not actually hitting the lower weekly bollinger band on the current wave. 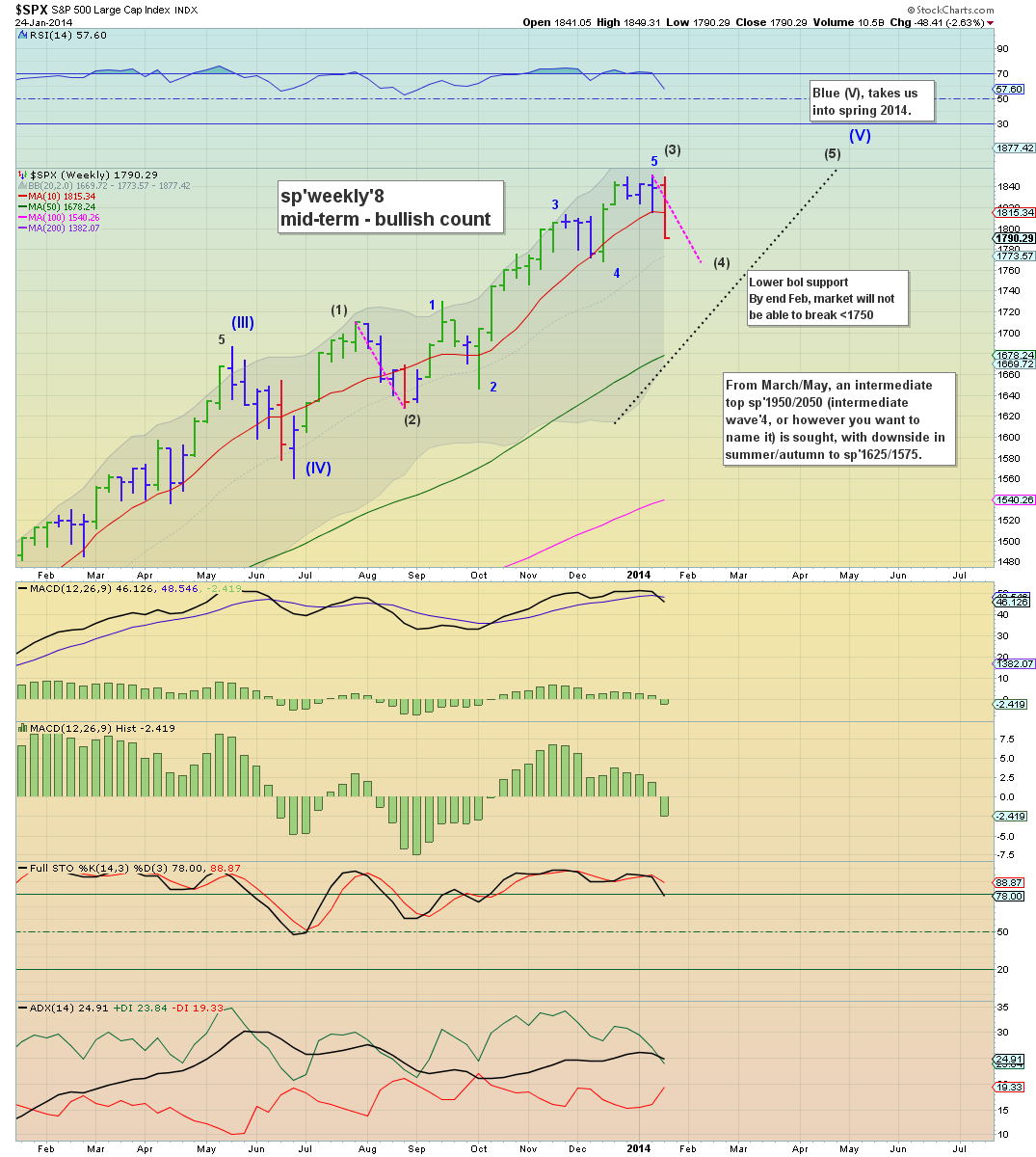 So..if late Feb..the market is 1750..or lower..then I will have high confidence a top is in. On the flip side..if we're back in the 1800s late Feb/early March, I'll hold to my original outlook..with upside into April/May.

I would suggest anyone also look at the price action from 1998 and 2011, as two examples for what I am seeking. 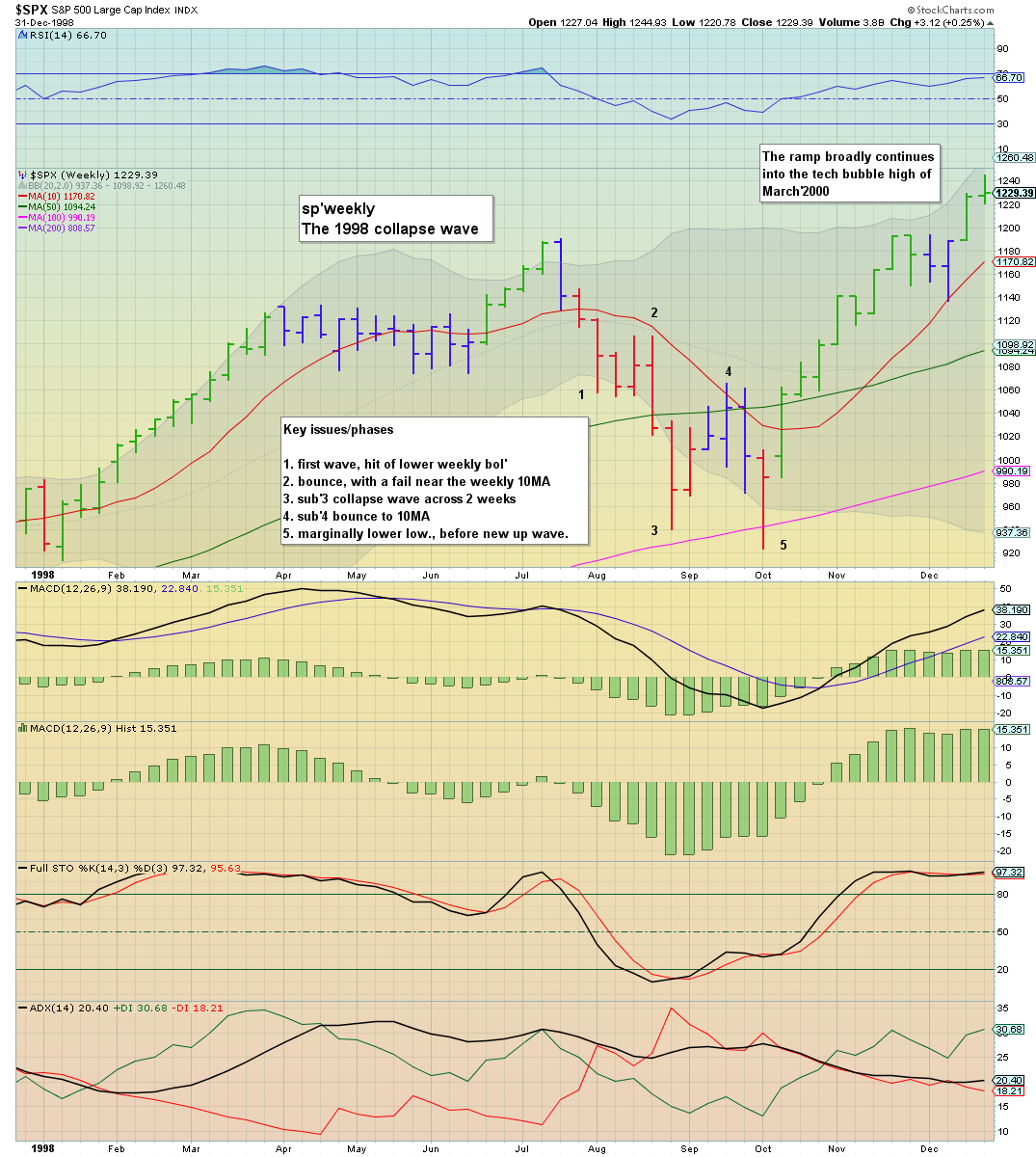 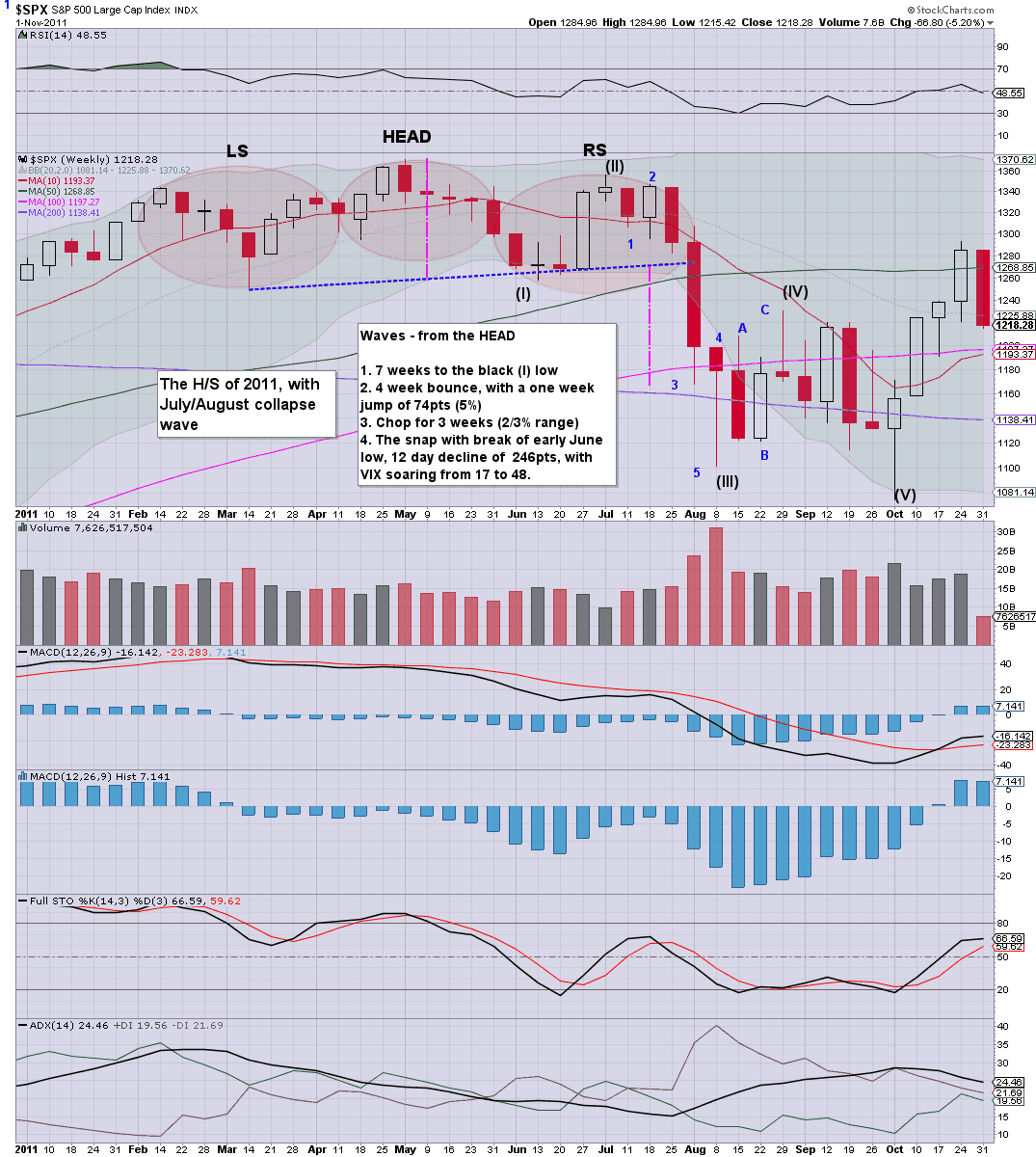 That is more than enough to conclude what turned out to be a pretty dynamic week!

The weekend post - late Saturday, will be on the US weekly indexes
Posted by Trading Sunset at 04:00:00
Email ThisBlogThis!Share to TwitterShare to FacebookShare to Pinterest 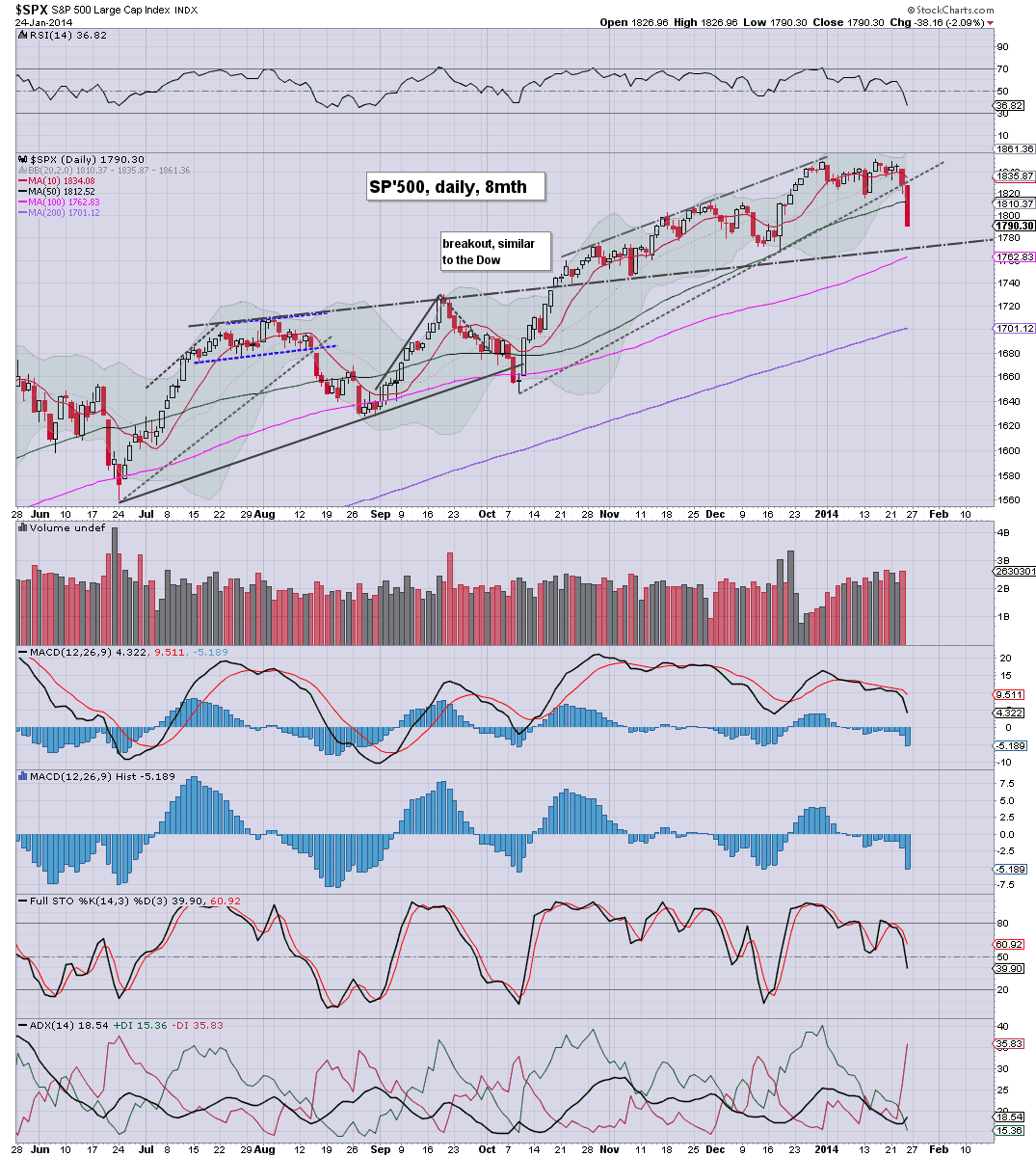 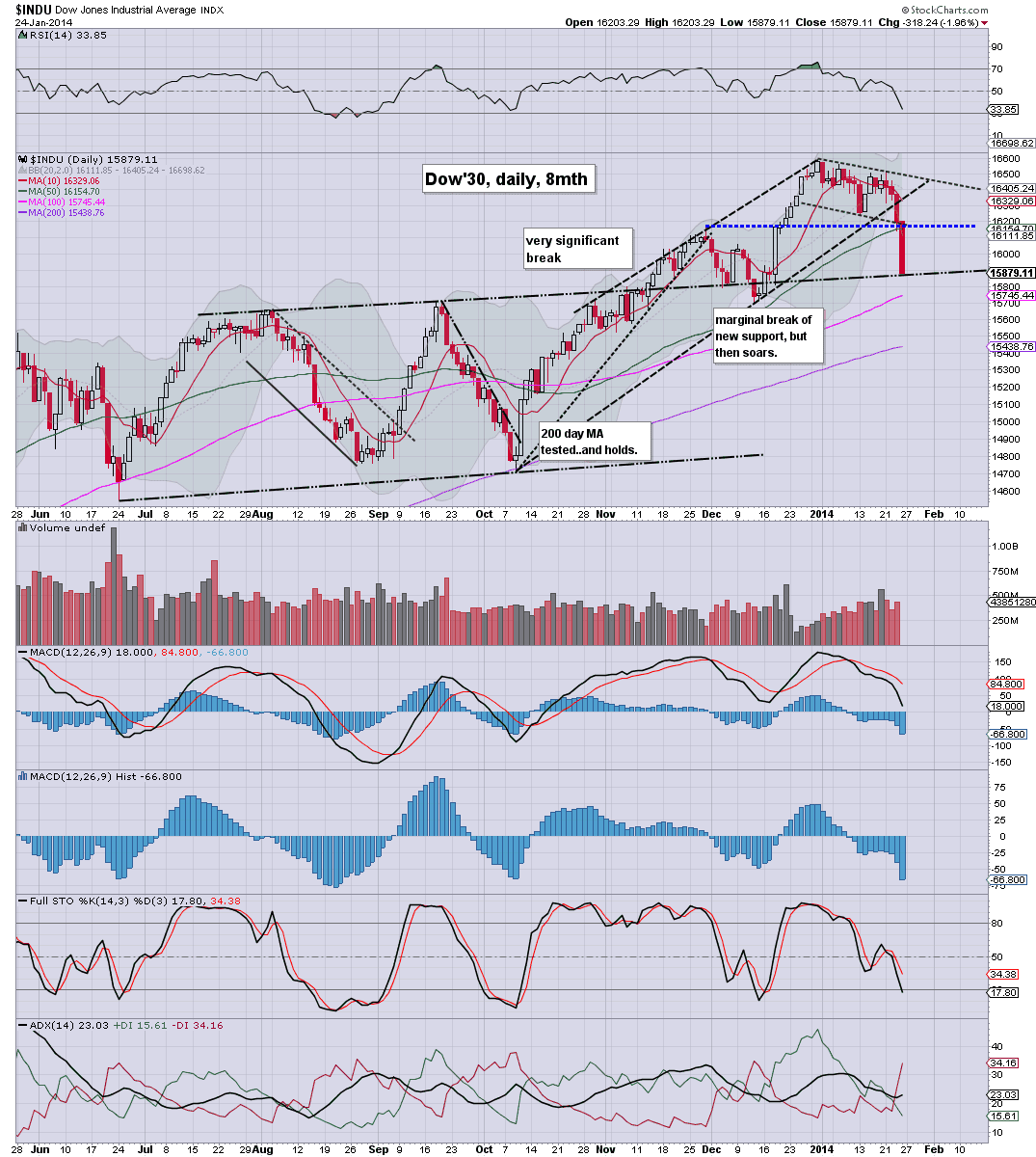 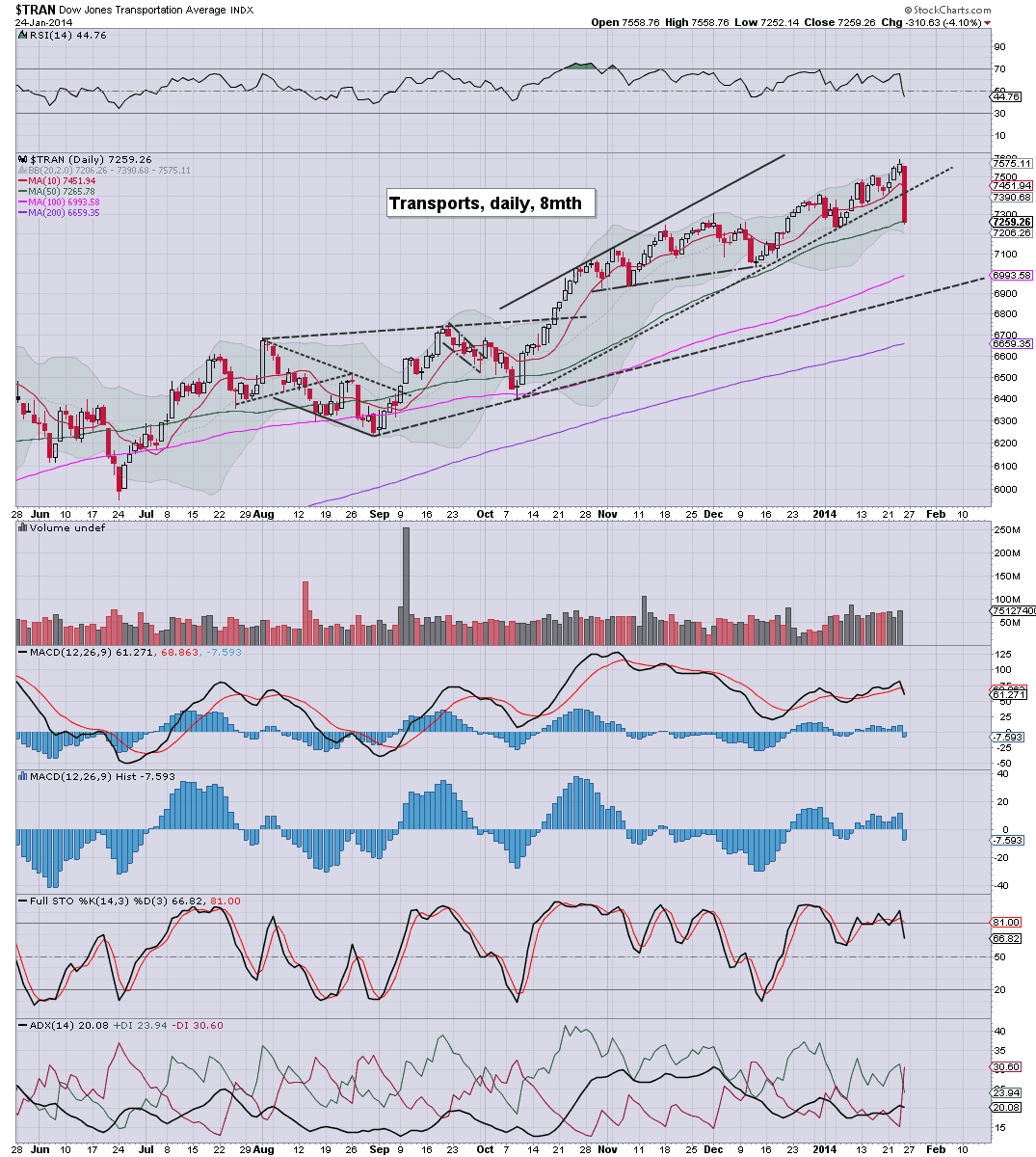 Well, that is one way to conclude the week! The first really significant two day decline since May 2012, with the VIX gaining around 30% in the lower 18s.

The real question is whether we've just recently seen the conclusion of giant wave'3 from the Oct'2011 low...but more on that later...
--