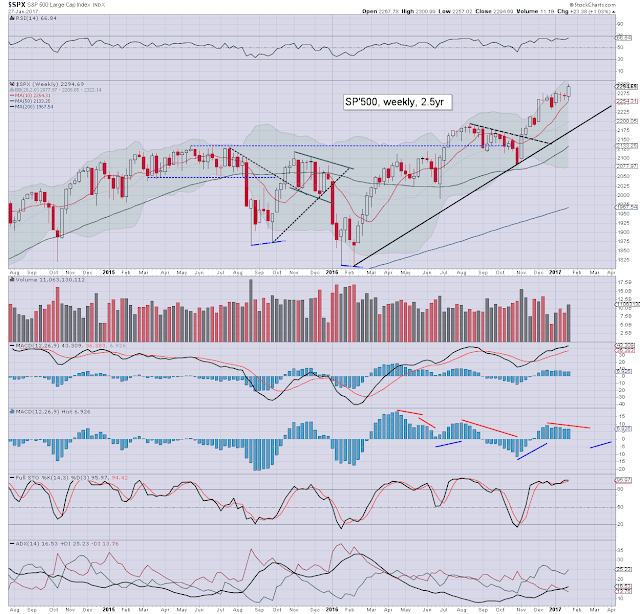 A new historic high of 2300, with the sp' net higher by 23pts (1.0%), settling @ 2292. Underlying MACD (blue bar histogram) cycle is still leaning on the downward side, whilst new highs are still being made. 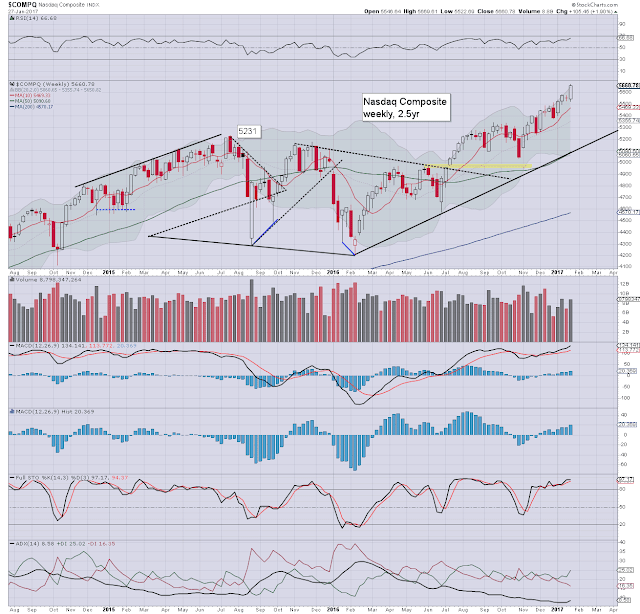 The Nasdaq continues to lead the broader market higher, and saw a net weekly gain of 1.9%, settling at 5660. Just reflect on this... the Nasdaq has climbed 34% since the Feb'2016 low of 4209. Assuming a minor retrace in Feb/March, at the current rate, we'll see the 6000s by May. Once we're at 6k, its a curious thought that the market could see a 16% washout, and still maintain core support of the 5K threshold. 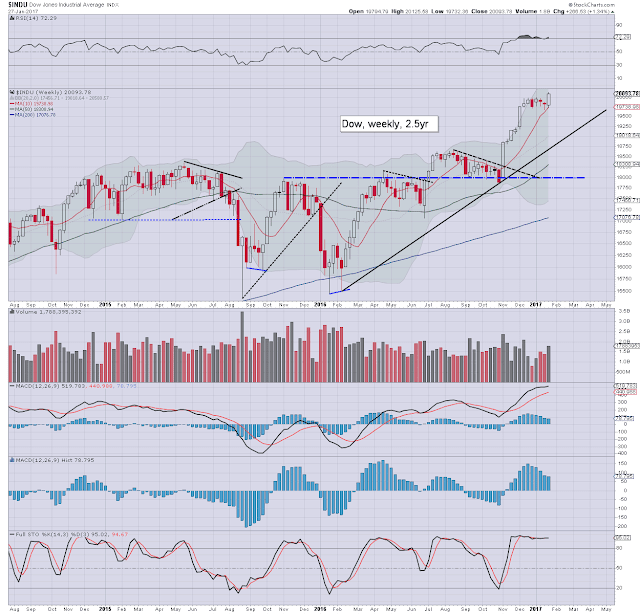 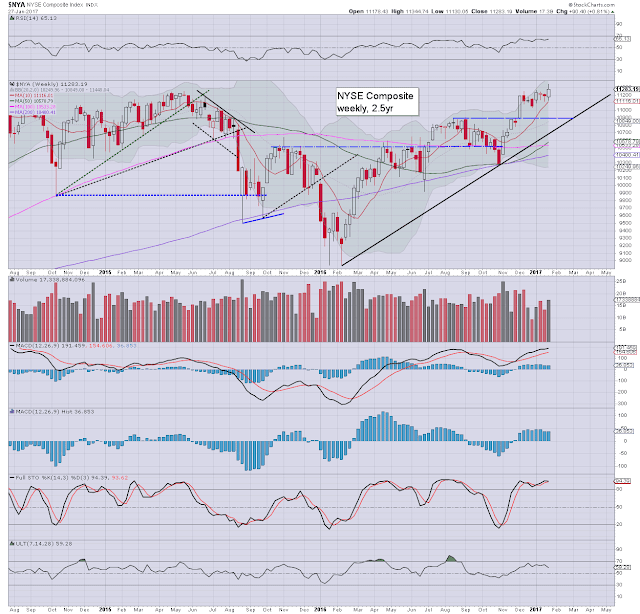 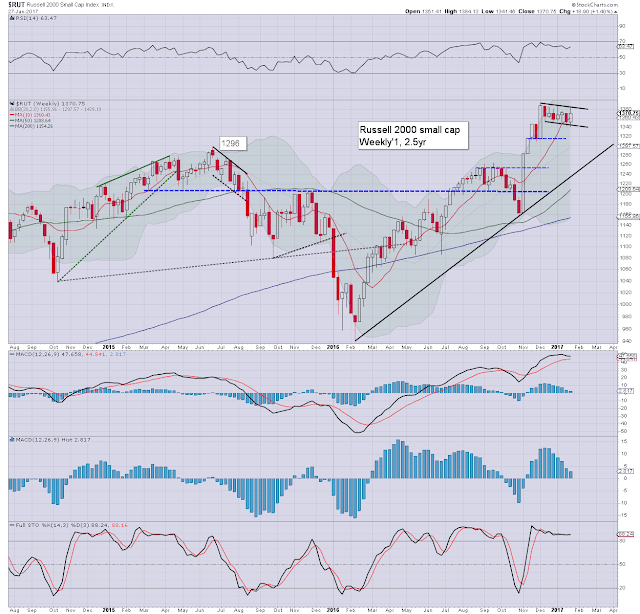 The second market leader - R2K, climbed by a rather significant 1.4%, settling at 1370. Upper bollinger will be offering the 1440/50s next week... which is a clear 4% higher. The 1500s seem due into the summer. Again, its a curious thought that few (if any) in the mainstream are talking about 'R2K @ 2k', before the current multi-year wave concludes. 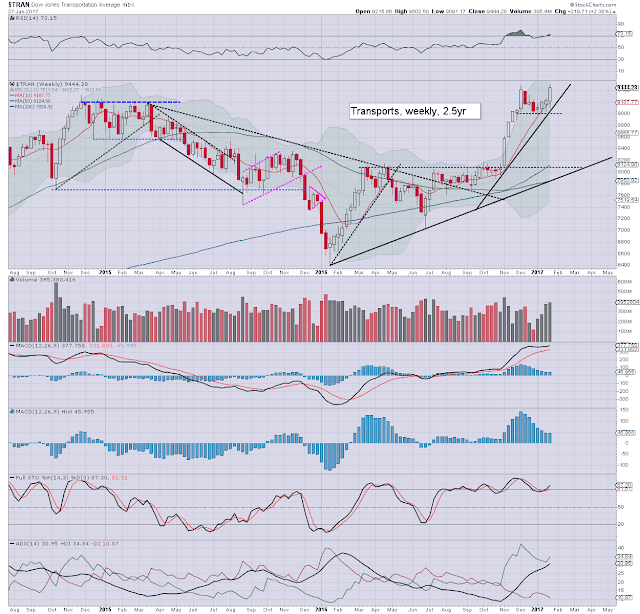 All US equity indexes are broadly bullish, and holding near/at historic highs.

The Nasdaq continues to lead the way higher, with the Dow and sp' following. The R2K is a little laggy, but its price structure is a very clear bull flag.

Near term outlook is bullish, with another 1-2% of basic upside, before the next realistic opportunity of a 4-5% retrace.
--

There is an absolute truck load of corp' earnings and econ-data in the week ahead...

**FOMC announcement @ 2pm.There will not be a press' conf.

No one expects a rate hike, least of all yours truly. I remain expecting three rate hikes this year... May, Sept', and Dec'.
-

*as Tuesday is month end, expect price action to be pretty choppy across the afternoon, not least as the market might be a little twitchy ahead of AAPL earnings.
--

As ever, if you like these posts, you can support me via a monthly subscription. For $20pcm, you'll have access to my continued intraday postings, which total a rather monstrous 220/240 each month.

*the next post on this page will likely appear Mon' @ 7pm EST.
Posted by Trading Sunset at 17:00:00
Email ThisBlogThis!Share to TwitterShare to FacebookShare to Pinterest

A subdued end to the week 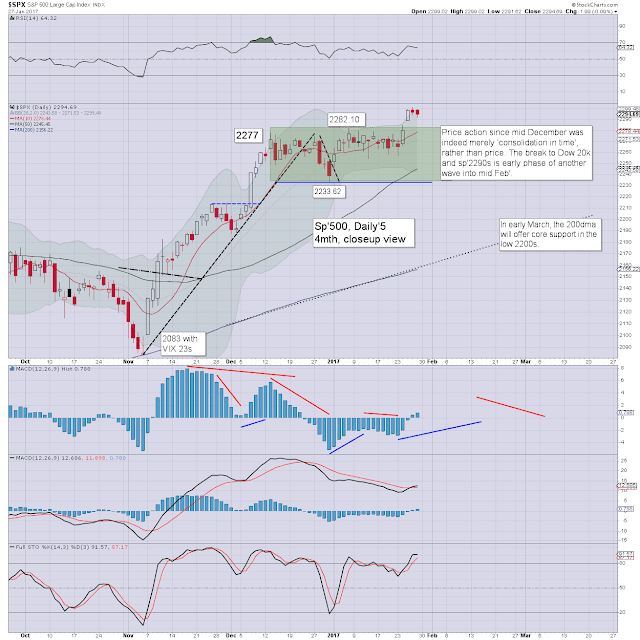 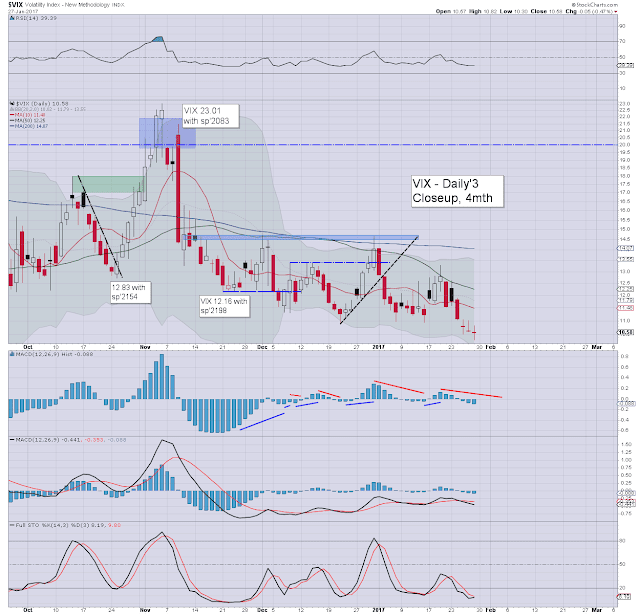 Despite a great many corp' earnings, and a box of key econ-data, equity price action was subdued across the day. Short term price structure is offering a baby bull flag, with upside to 2305/10 next Mon/Tuesday.

Naturally, the VIX was itself subdued, with an intra low of 10.30, the lowest level since summer 2014.

*the weekend post will appear Sat'12pm EST, and will fully detail the US weekly indexes.
Posted by Trading Sunset at 00:00:00
Email ThisBlogThis!Share to TwitterShare to FacebookShare to Pinterest
Newer Posts Older Posts Home
Subscribe to: Posts (Atom)