VIX cools... before next up wave

With equities seeing a significant bounce after the Tuesday declines, the VIX was in cooling mode, settling -5.6% @ 13.27 (intra low 13.05). Near term outlook offers renewed equity weakness to sp'2080/75, which should equate to VIX briefly in the 16/17s. 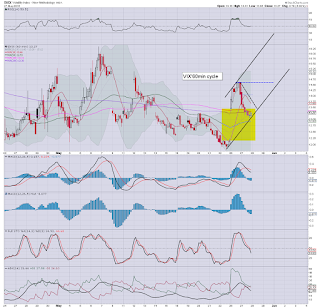 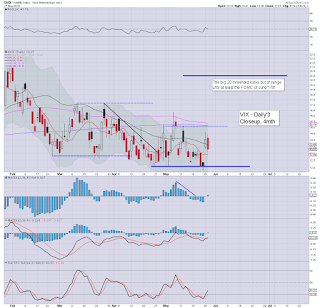 *the closing hourly candle is offering a turn.. bodes slightly in favour to the equity bears for early Thursday
--

The big VIX 20 threshold still looks out of range for some weeks.
-- 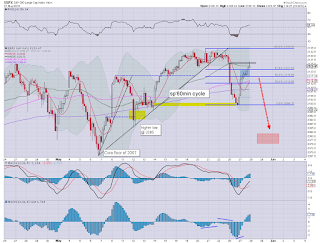 *far from any weakness into the close, the last hour of the day saw further strength, with a gap fill at sp'2125/26.
- 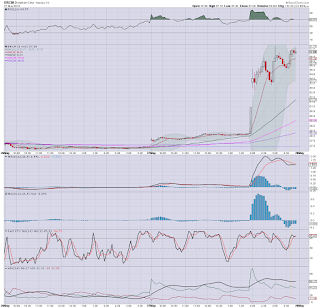 I am holding to a downside target zone of sp'2080/75, although clearly, that now looks a long way down, and would certainly take the better part of two days to reach.

US equities are holding moderate gains, but look vulnerable to cooling into the close, although a net daily gain looks a given. USD is set for the sixth net daily gain of the last seven days... in the DXY 97s. Metals remain a touch weak, Gold -$1, with Silver -0.5%. 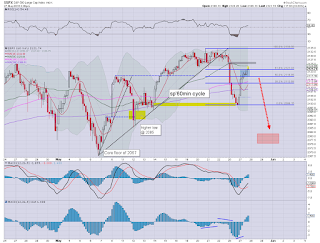 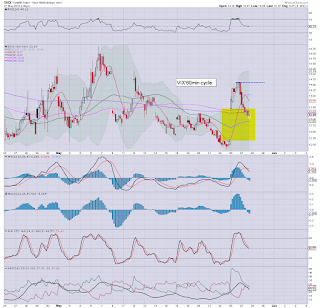 For the equity bears.. a rather tedious bounce day after the sig' Tuesday declines. As is often the case, the bounces almost entirely negate the original decline.

Regardless of the exact close... Thursday looks in favour of the bears. Since the downside target is 2080/75.. that is likely to take more than a day... which would take us into late Friday morning.
- 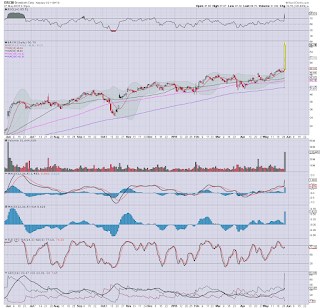 Market needs some 'spooky news' tomorrow....
Posted by Trading Sunset at 19:51:00
Email ThisBlogThis!Share to TwitterShare to FacebookShare to Pinterest

2pm update - its time for a turn

US equities have seen a sig' retrace of the Tuesday declines... and are now due a rollover. Primary downside target remains sp'2080/75.. where there are a number of aspects of support. USD remains fractionally higher in the DXY 97.30s, the 98s look very viable tomorrow. Gold remains broadly weak, -$1. 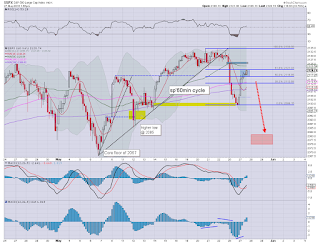 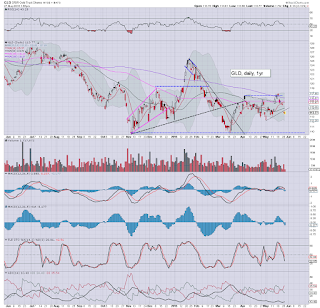 *despite churning sideways, Gold bears (myself included) should be content with today... Thursday is offering another $15 or so lower to $1170.
--

As ever, a typical turn time is 2.30pm. Right now, the 15min equity cycle is offering to turn negative on the MACD cycle around 2.30pm.

The remaining two hours should offer some indication of how we'll trade tomorrow.
--

2.37pm... a viable micro spike top of sp'2123....  its time to see how many of the rats want out ahead of tomorrow.
Posted by Trading Sunset at 18:58:00
Email ThisBlogThis!Share to TwitterShare to FacebookShare to Pinterest

1pm update - chop before a rollover 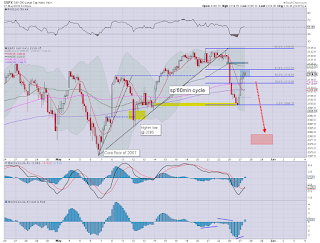 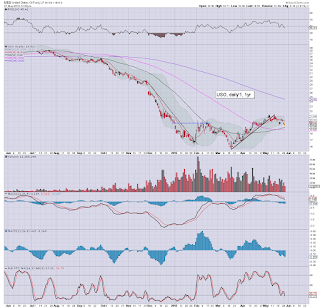 Awaiting a rollover this afternoon.. although clearly, a net daily gain (if minor) looks due for most indexes.

The 'entertainment' should resume tomorrow for the equity bears.

back at 2pm
Posted by Trading Sunset at 17:54:00
Email ThisBlogThis!Share to TwitterShare to FacebookShare to Pinterest

US equities are still battling higher, but with a very probable rollover. Primary downside target remains sp'2080/75 zone.. along with VIX 16/17s. USD is in churn mode... with the DXY 98s seemingly due Thurs/Friday, which will put extra downward pressure on the precious metals/Oil. 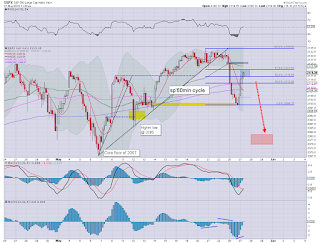 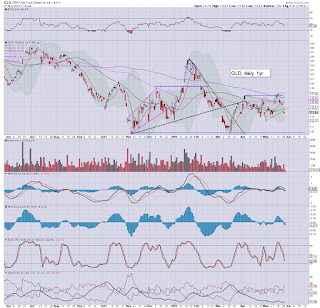 *metals are in minor churn mode... with another sig' decline due tomorrow.. and perhaps into Friday/end month.

Indeed.. Friday is the last trading day of May, and for the chart maniacs out there.. the monthly closes are always pretty important!
--

Holding to best short term guess... an equity rollover.. to the low sp'2080s or so.. with another kick higher in the VIX.

The grander issue is the USD.. and that is largely dependent on whether the Greeks want to kick things out for another few months. Considering the past FIVE years, why wouldn't they want another few months before they finally default/GREXIT?

--
time for lunch :)
Posted by Trading Sunset at 16:55:00
Email ThisBlogThis!Share to TwitterShare to FacebookShare to Pinterest

11am update - market getting stuck

US equities are holding moderate gains, but there is already the first sign that the market is getting stuck, with another sig' wave lower due before the week/month wraps up. Primary downside target is sp'2080/75 zone.. which should equate to VIX 16/17s. USD has cooled a little from the open, but still +0.1% in the DXY 97.30s. 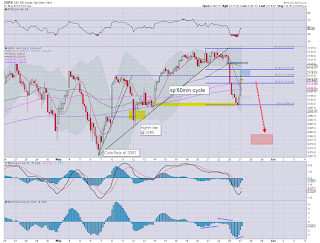 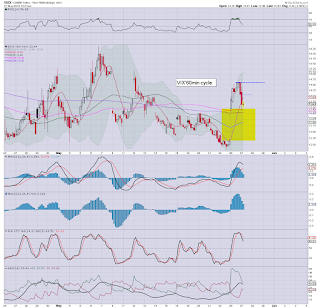 There is certainly a possibility of a secondary wave higher this afternoon to around 2120/22, but overall... equity bears have a high opportunity here to roll the market back lower... with renewed sig' weakness tomorrow.

strength: airlines, DAL/UAL, both higher by around 3%... helped as Oil continues to cool
Posted by Trading Sunset at 15:54:00
Email ThisBlogThis!Share to TwitterShare to FacebookShare to Pinterest

10am update - gains not likely to endure

US equities open a little higher, but the gains look set to be negated... whether in late afternoon.. or early Thursday. USD continues to put pressure on most asset classes, Gold -$2, with Oil -0.7%. 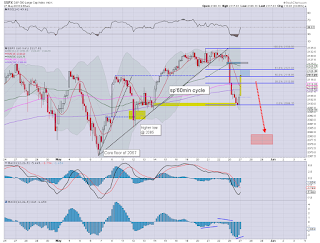 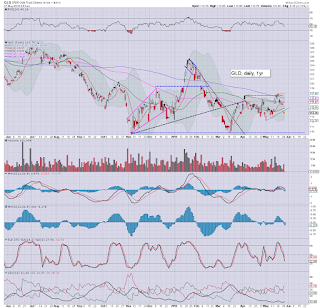 *first target on GLD is around 112.25... if 111s by the Friday close, it'd be another indirect indicator that the USD will keep rising... which would be a major problem for the broader market.
--

As for equities... best guess... market to get stuck around 2116/22... and then rollover later today. There is a micro gap at 2126, but that looks overly difficult to reach today.

For those looking to short.. a move from 2116/22 to around 2080 would certainly be a valid trade before the week/month concludes.
--

early gains.. airlines, DAL/UAL, both higher by around 2%
Posted by Trading Sunset at 14:57:00
Email ThisBlogThis!Share to TwitterShare to FacebookShare to Pinterest 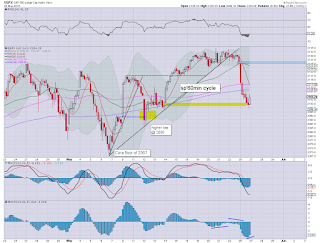 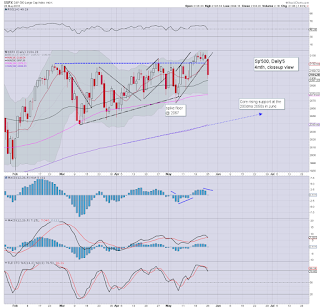 So, we're set to open a little higher, but based on yesterdays action, we still look headed for the sp'2080/75 zone within the next few days. I suppose you could count today as a B wave bounce... but regardless, I'd be surprised if sp'2099 was a cycle low.

Lets see if the market gets stuck by 11am... a moderate net daily decline still looks very possible.

Broadly though, regardless of any renewed weakness this week, the market still looks set for new highs (well, except the Trans), in June/July.... so long as the USD stops rising!
-

This remains a HUGE issue... 98s would arguably completely rule out any hope of renewed weakness to 90/89.  Implications of >100 are rather severe.
Posted by Trading Sunset at 13:29:00
Email ThisBlogThis!Share to TwitterShare to FacebookShare to Pinterest

Strong dollar... and a hyper China

The USD has started the week with a rather significant net daily gain of 1.3% @ DXY 97.40. Meanwhile in Asia, the China market remains in hyper bullish mode, already net higher this week by 5.4% @ 4910. The giant 5K threshold is bizarrely imminent. 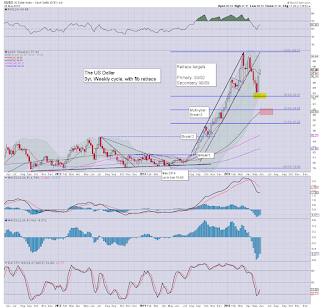 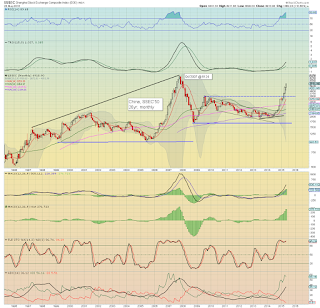 I had been expecting a 1-2 week bounce... but this move is already borderline 'overly strong'. A few daily closes in the 98s would bode for new multi-year highs (>100.71) in June, with a viable fast move to the 120s by the autumn... which would absolutely cause some degree of market shock across the world capital markets.

I remember last summer when I continued to highlight 3500 as a valid target.... and we're now 40% above that target.. in just ten months!

The China market has seen a truly incredible hyper-ramp since last summer. A major retrace is clearly viable at ANY time this summer/autumn. Core support is the old resistance of 3500. On no outlook does sustained price action <3500 look possible. 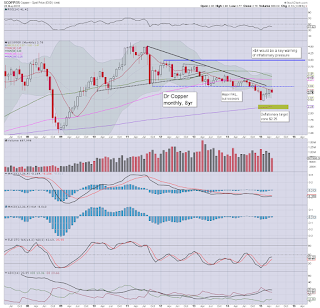 After 3 months of gains, Copper has got stuck under the $3 threshold. A net monthly decline looks due. Key downside target remains the low $2s. Copper is highly suggestive Gold/Silver will similarly continue lower across the summer/early autumn.

There is nothing of significance due this Wednesday... even the EIA oil report is pushed out to Thursday (due to the holiday).
--

US equity indexes closed significantly weak, sp -21pts @ 2104. The two leaders - Trans/R2K, settled lower by -1.5% and -1.1% respectively. Near term outlook is bearish to the sp'2080/75 zone. The mid term outlook is seemingly dependent upon whether the USD continues to climb... or starts to cool from the DXY 97/98s. 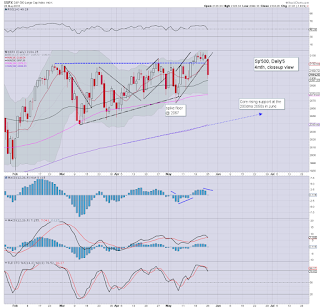 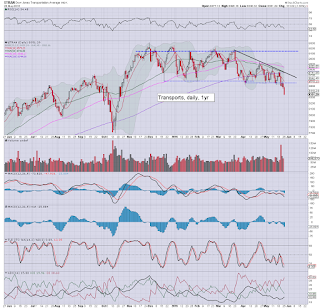 *the Transports remains the key laggard. Next support is not until the psy' level of 8K, and that is another 4% or so lower.
--

Despite a bearish day, bears can't get genuinely excited until a breach <2040.. where the 200dma is lurking.

The giant sp' 2K threshold remains core support... all things considered (not least the ECB QE-pomo), I do not currently see sub 2K as viable in the near term.