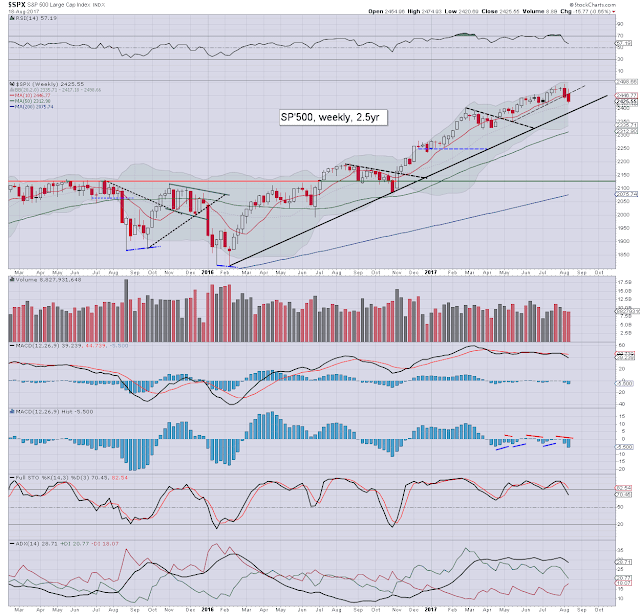 Best guess: a near term bounce to at least 2462/68. A daily close >2474 will offer new historic highs to the low 2500s in September. A 5% retrace looks very probable within the late Sept/early Oct' period. The year end target of 2683 remains on track. 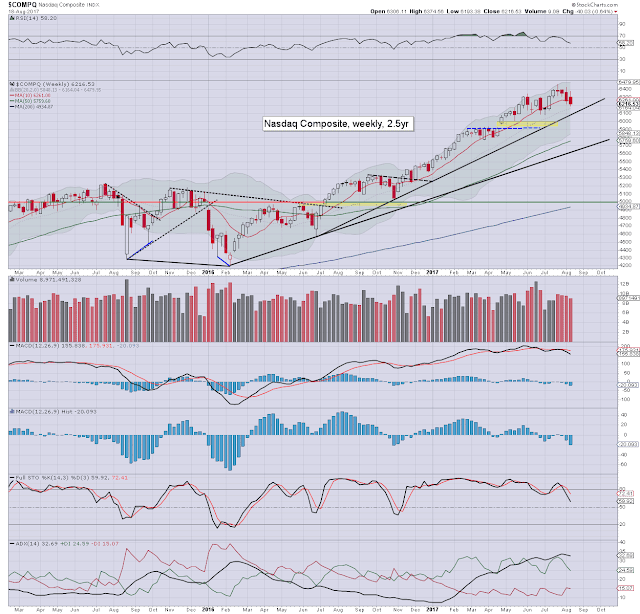 The tech settled lower for a fourth consecutive week, -0.6% at 6216, the most bearish run since May 2016. Price momentum moderately leans to the bears, and in theory, could tick lower for another 2-3 weeks. There is huge support within the 6000/5900 zone. It will be important for the equity bulls to break >6460 in the next multi-week up cycle within Sept/Oct. A lower high around 6300, with a new low under first rising support (<6100) would be a serious problem. 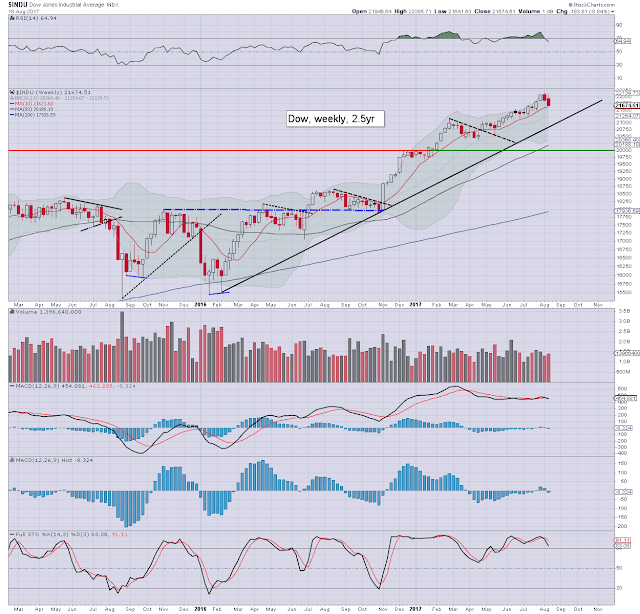 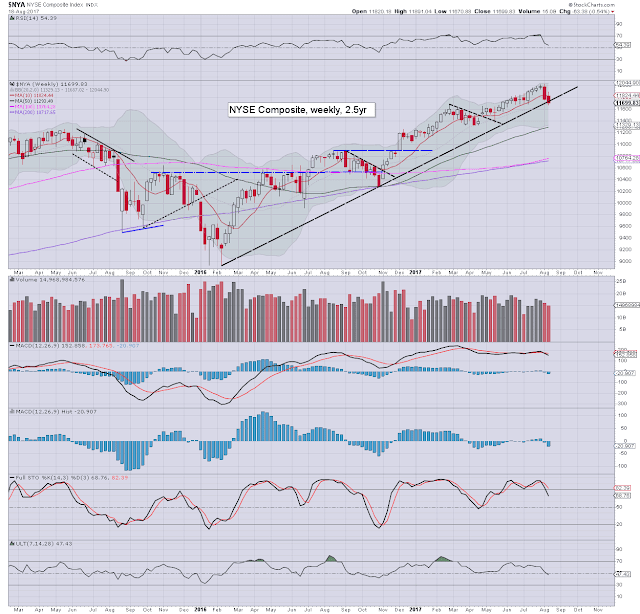 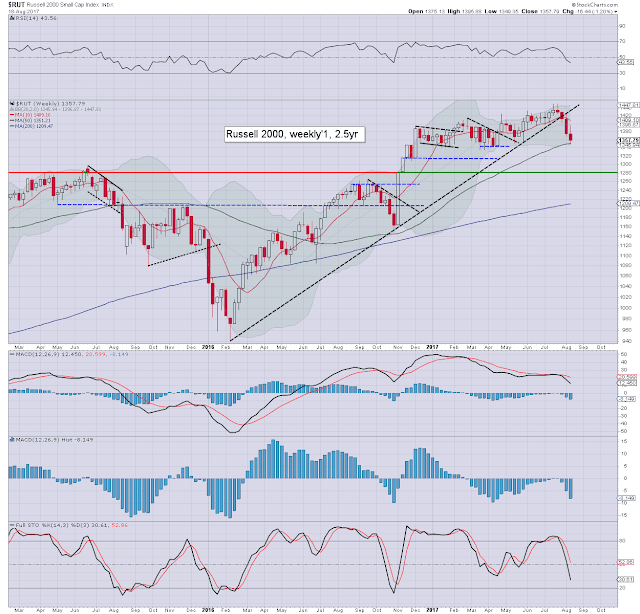 The second market leader - R2K, is still leading the way lower, settling lower for a fourth consecutive week, -1.2% at 1357. Its notable that from the recent historic high of 1452, the R2K has declined by a rather significant 6.5%. Underlying MACD is now on the rather low side, with a probable bounce to attempt to re-take the 1400 threshold. A key lower high would be a serious problem, and threaten basic downside to the 1300/1280 zone. 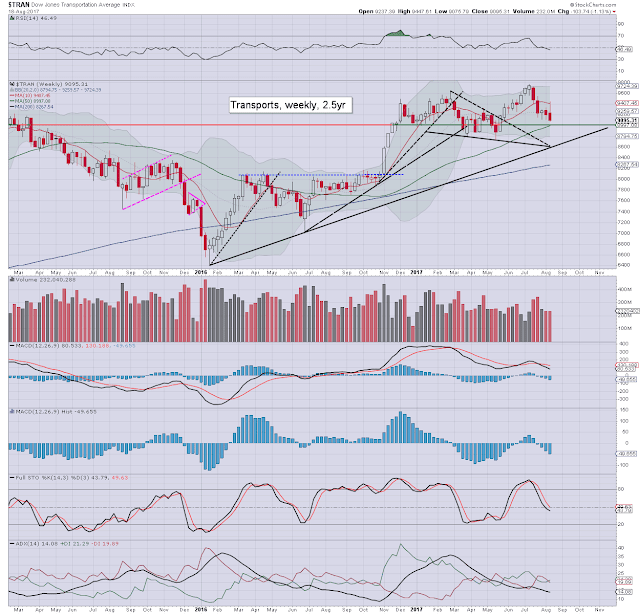 The 'old leader' - Transports, settled lower for the fourth week of the past five, -1.1% at 9095. There is natural psy' level support around 9k, but the weekly close under the 200dma (9190) is rather bearish. This week's candle is a clear spike fail against the key 10MA. It strongly suggest that the 9400s are now strong resistance, and will restrain any bounces into end August/early September.

2 of the 6 indexes - R2K and NYSE comp' have settled below key rising support - that stretches back to early 2016.

It remains notable that recent cooling remains relatively moderate, with the sp'2490>20 wave amounting to just 2.8%.

All six indexes recently broke new historic highs, which is very bullish on any basis.
-- 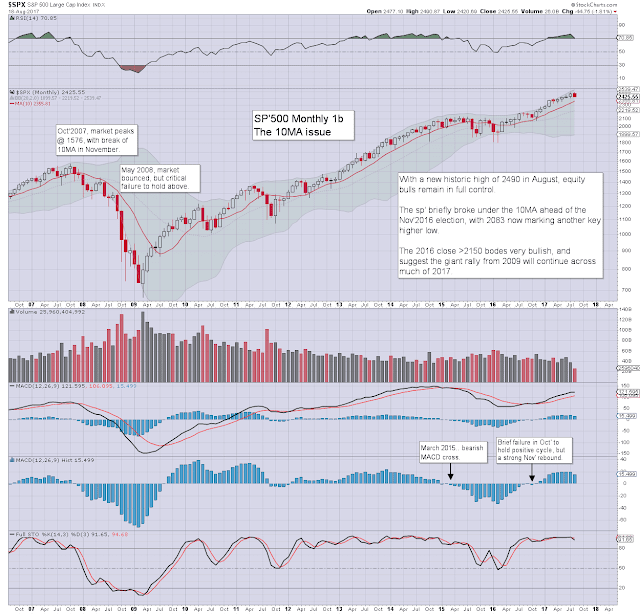 I recognise some prefer the 13MA, but regardless, the point is... the mid/long term trend remains outright bullish. For now, other than day/swing trading shorts, there is no reason to be strategically bearish on a mid term basis.

Things only get interesting with a break AND monthly close under 2360/50. That range/threshold is climbing with each month of course. 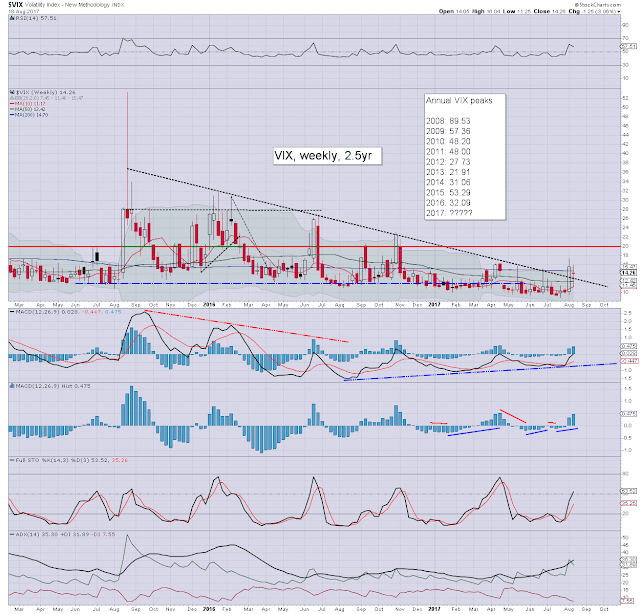 Last week saw the VIX decisively break AND settle above declining trend. The series of lower highs from Aug'2015 has concluded. Any price action above last Friday's (pre-market) high of 17.28 would merit alarm bells, and offer an initial jump to the key 20 threshold, and then possibly much higher.

So, for now, there is still no real reason to be particularly bearish. The VIX is offering a hint of 'something' this Sept/Oct, but equities are still broadly strong, and close to recent historic highs. If you want that kind of perspective during the market day, then subscribe!
--

In terms of earnings and econ-data, there is very little, and it will likely be the quietest week since early July.

Jackson Hole: there will be a meeting of economists, central bankers, and other miscellaneous lunatics, beginning on Thursday, and stretching into the weekend. Yellen is scheduled to speak Friday morning at 10am, and that will no doubt garner major media coverage.

--
*the next post on this page will likely appear 6pm EST on Monday.
Posted by Trading Sunset at 17:00:00
Email ThisBlogThis!Share to TwitterShare to FacebookShare to Pinterest
Newer Posts Older Posts Home
Subscribe to: Posts (Atom)