With equities rebounding from an early low of sp'1824, the VIX slipped back into melt down mode, falling across the day, closing -4.6% @ 14.79. Near term outlook is for the VIX to remain in the tight 15/12 zone. VIX 20s look unlikely until at least late March/early April. 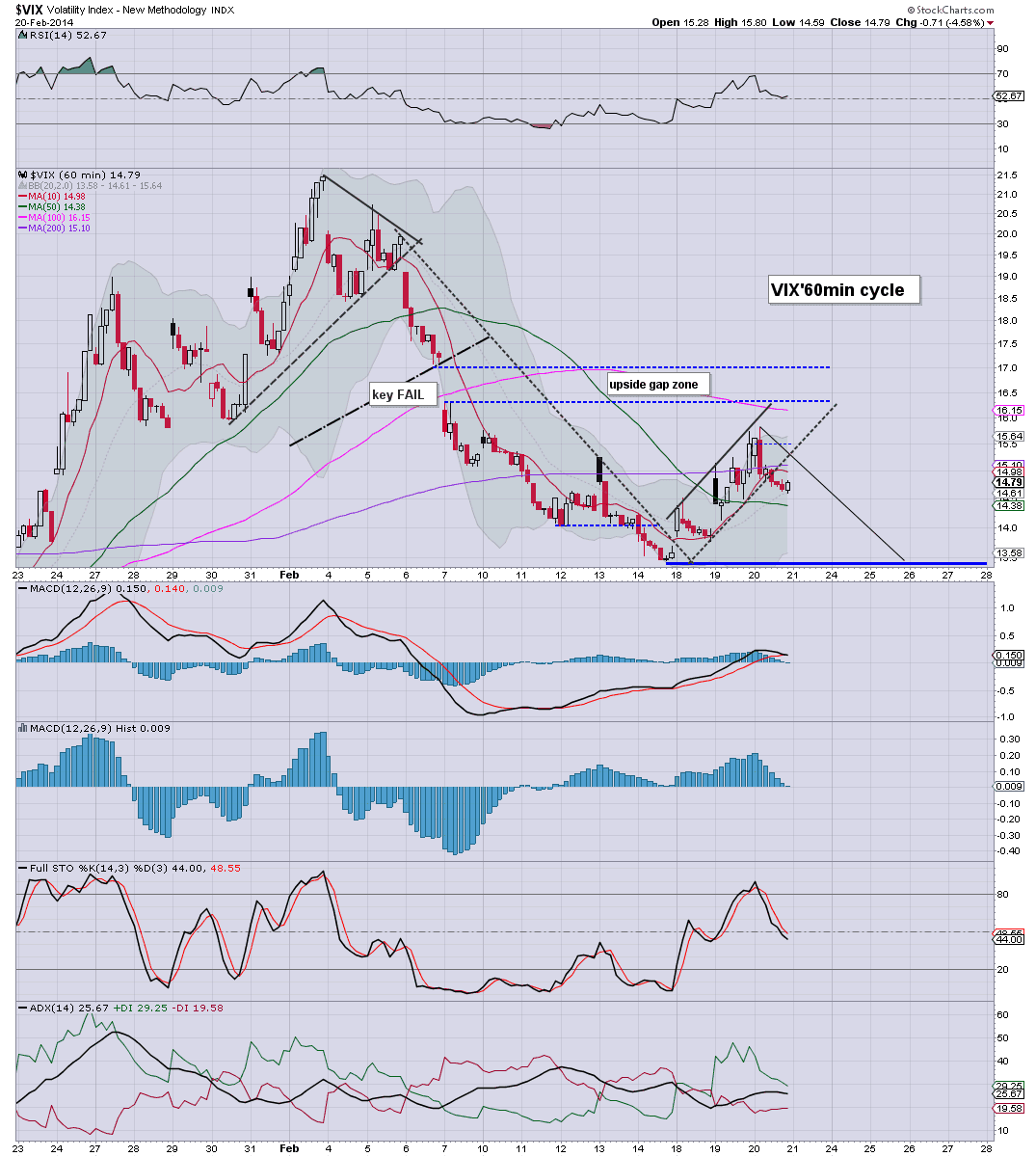 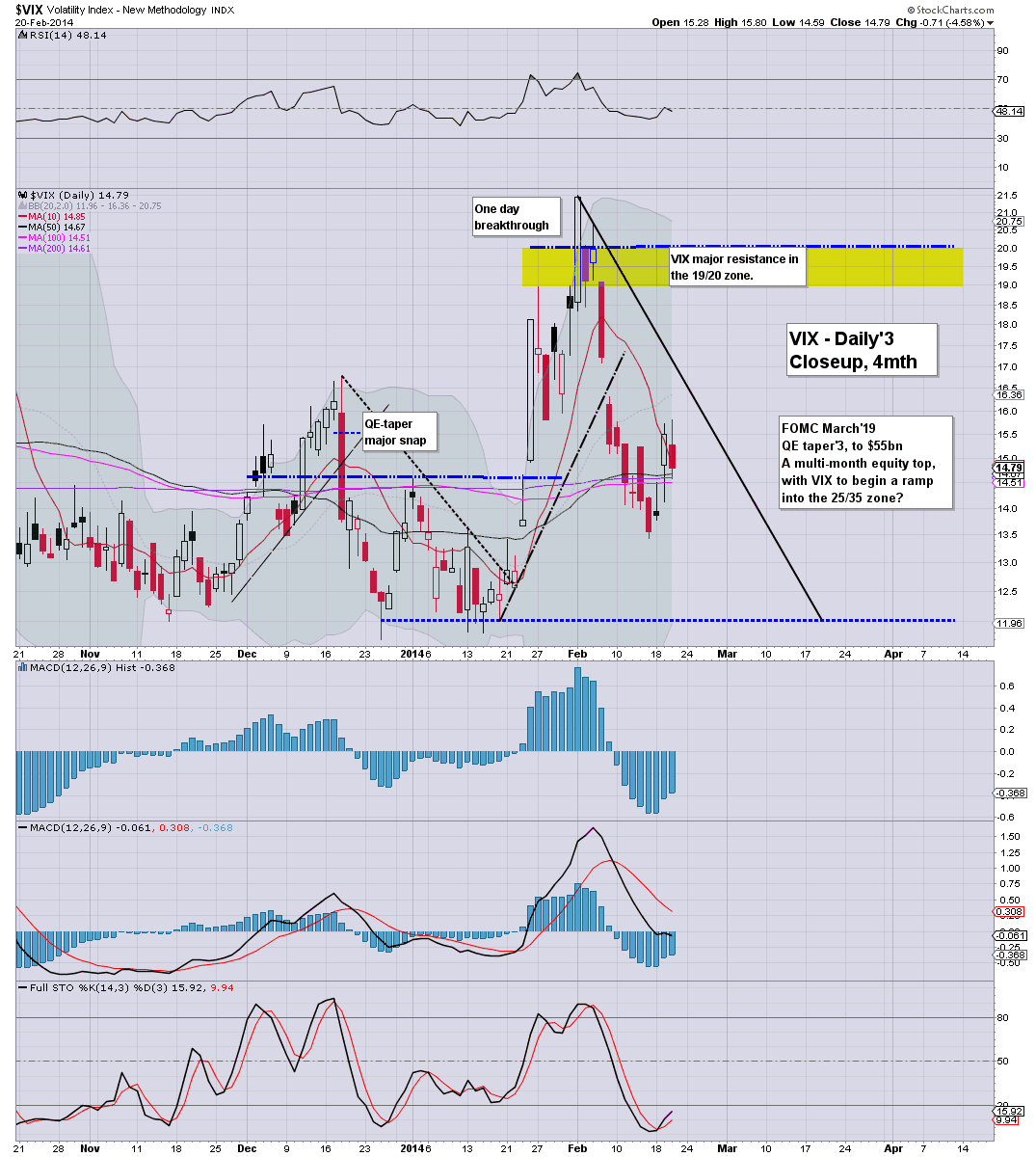 Whether we floor in the 12s..or even 11s..we'll just have to see when we are in mid/late March.

I've no doubt that we'll see VIX 20s, which right now seems possible in April. The really exciting unknown is whether VIX 30s or even 40s are viable this summer.
-- 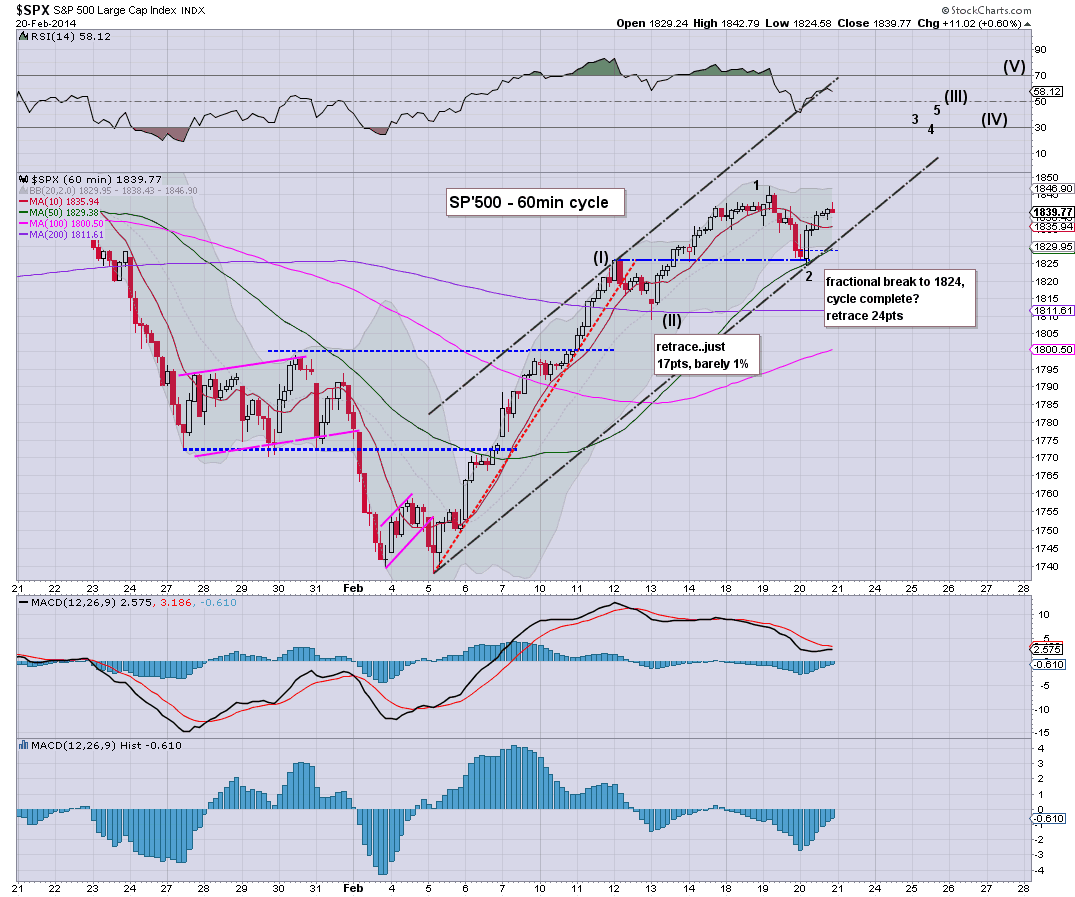 For those bears who were getting overly excited at the Wednesday closing hour, today was indeed another disappointment.

Equity bears failed to see a second down day, and frankly...I sure am not surprised. The setup was always lousy, and despite breaking (briefly) 1826...we saw a classic reversal candle in the 10am hour.

I'm holding to the general outlook of broader upside into the next FOMC of March'19. From there...things should get real 'entertaining'.

For those watching..some rather crazy action in GRPN. Earnings were better than expected, with the stock soaring..but has seen a very sharp reversal, from +11% to -7% or so.

Those crazy hysteria tech stocks....urghhh.
--
Posted by Trading Sunset at 21:01:00
Email ThisBlogThis!Share to TwitterShare to FacebookShare to Pinterest

Yesterday saw a somewhat weak closing hour, yet today, with the morning reversal, we're likely to see underlying upward pressure into the close as equity bears continue to bail. Metals are holding moderate gains, Gold +$7. VIX is merely melting lower -5.3% in the 14.60s. 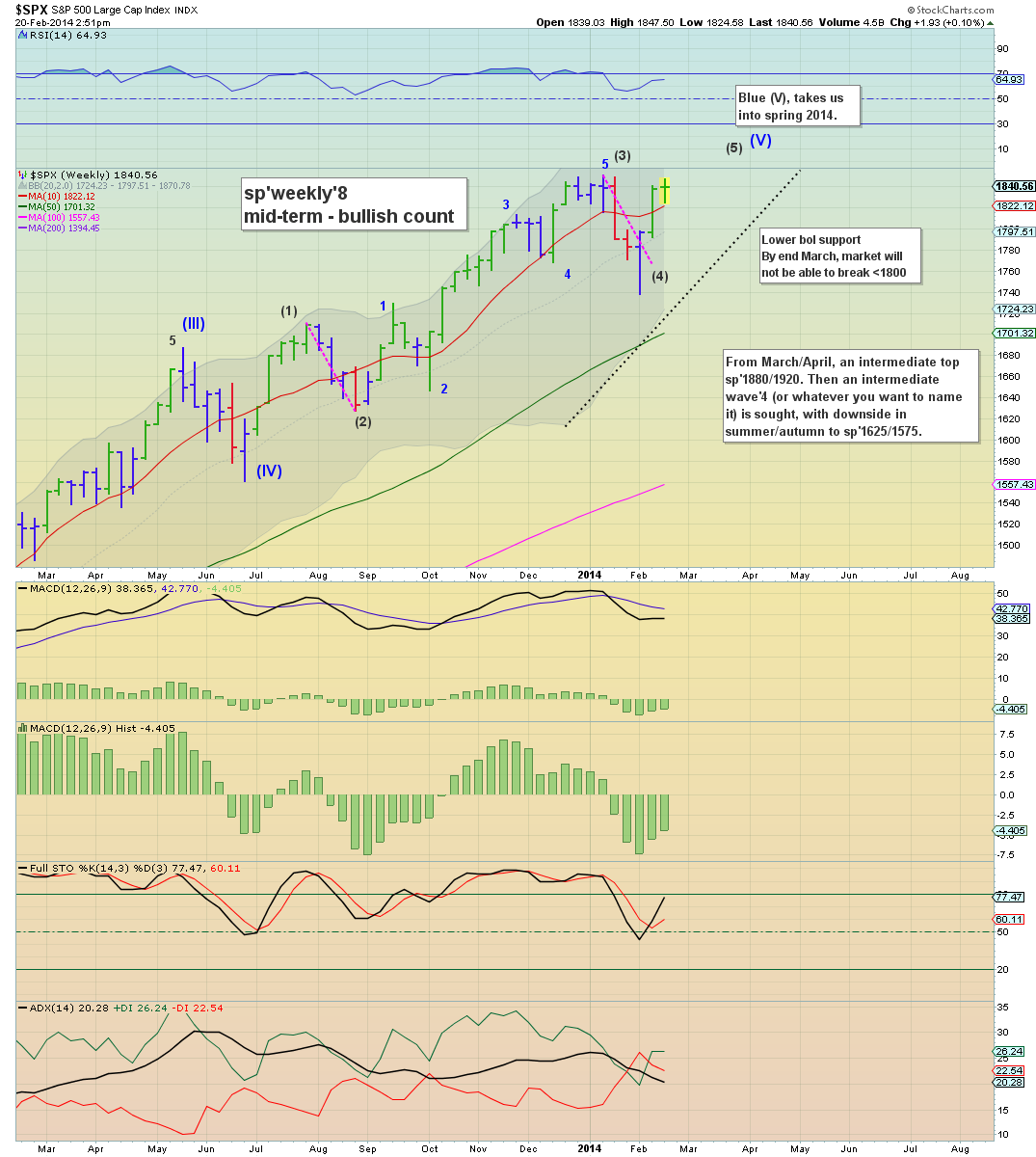 *ignoring the smaller cycles...and eyes on the bigger prize. A key inter'3 top...around the time of the next FOMC. Viable upside to 1880/1920...although that might even be a slight under-estimate.

Anyway, we'll see where we are..when Yellen next appears.
--

Considering the Wednesday weakness, equity bulls should be content with ANY close above the hourly 10MA of 1835.

Regardless..bears didn't manage two consecutive down days.   back at the close.
Posted by Trading Sunset at 19:53:00
Email ThisBlogThis!Share to TwitterShare to FacebookShare to Pinterest 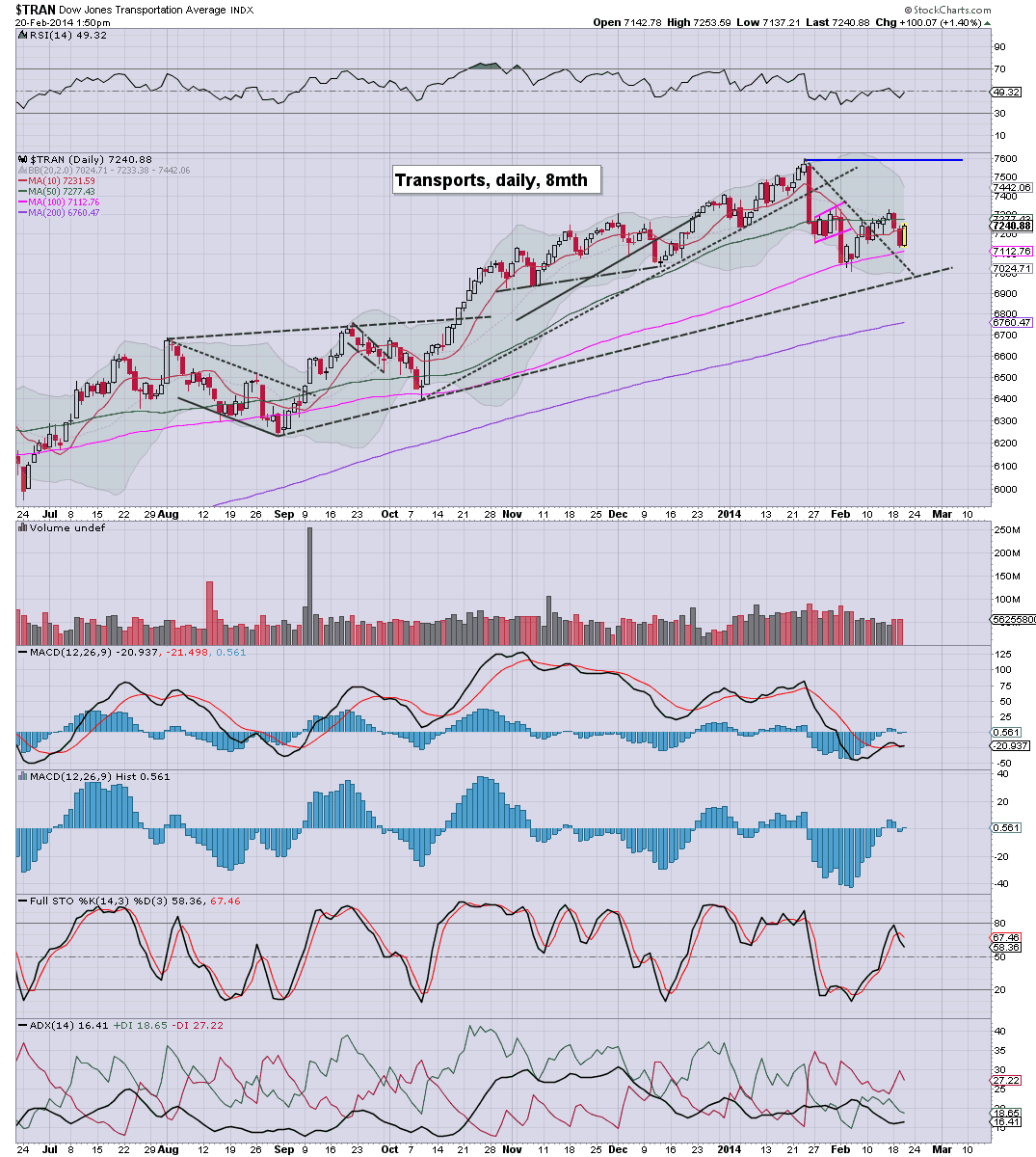 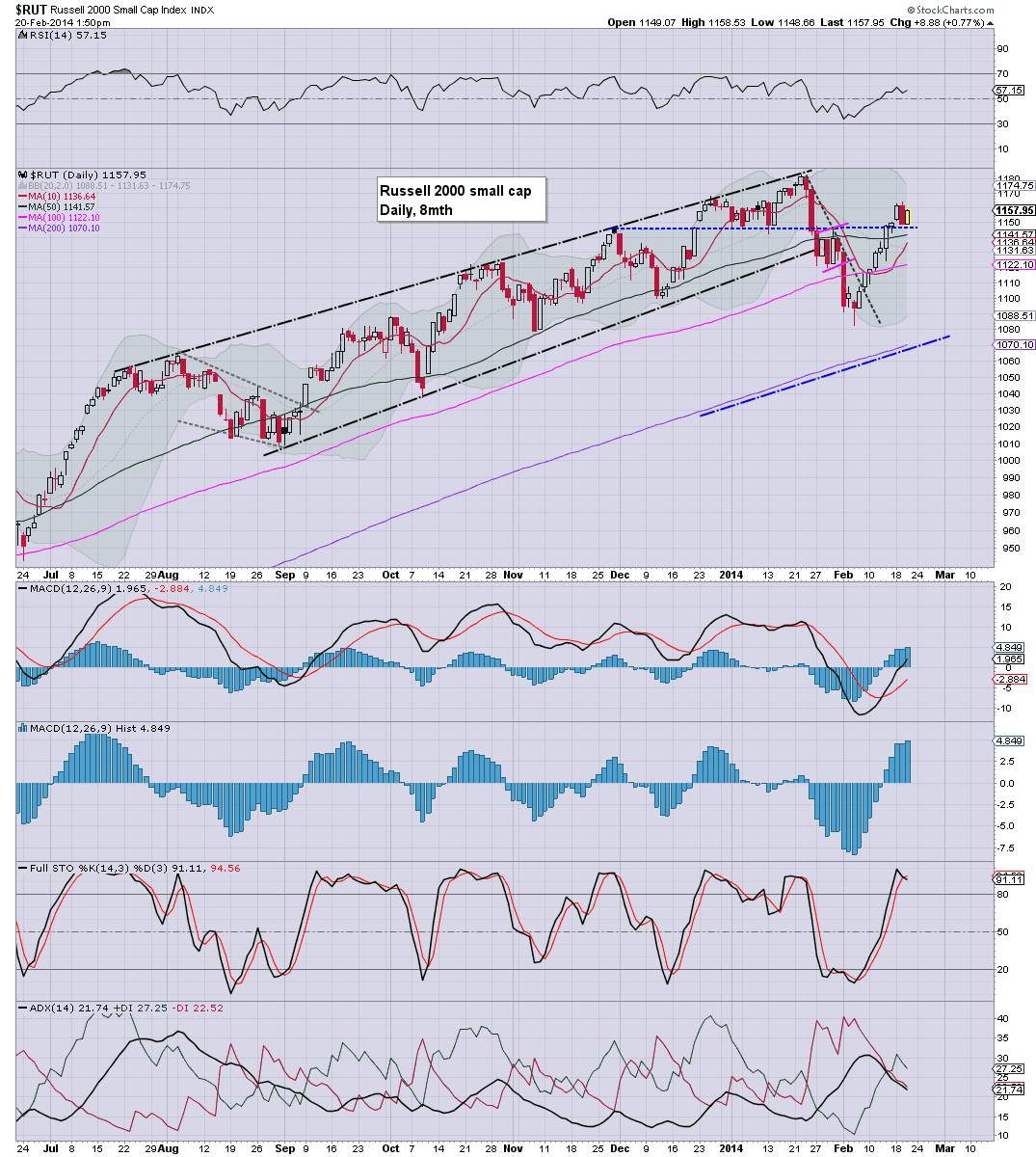 With the trans holding above the big 7000, ..and pulling back upward..the market looks set for new highs.

Aside from that, there isn't much else to note this hour.
-

I'm just staring at the daily/weekly charts...all point to a key inter'3 top...just 4 weeks away.

Been a long wait...8 months...1 to go...more on that later though.
Posted by Trading Sunset at 18:53:00
Email ThisBlogThis!Share to TwitterShare to FacebookShare to Pinterest 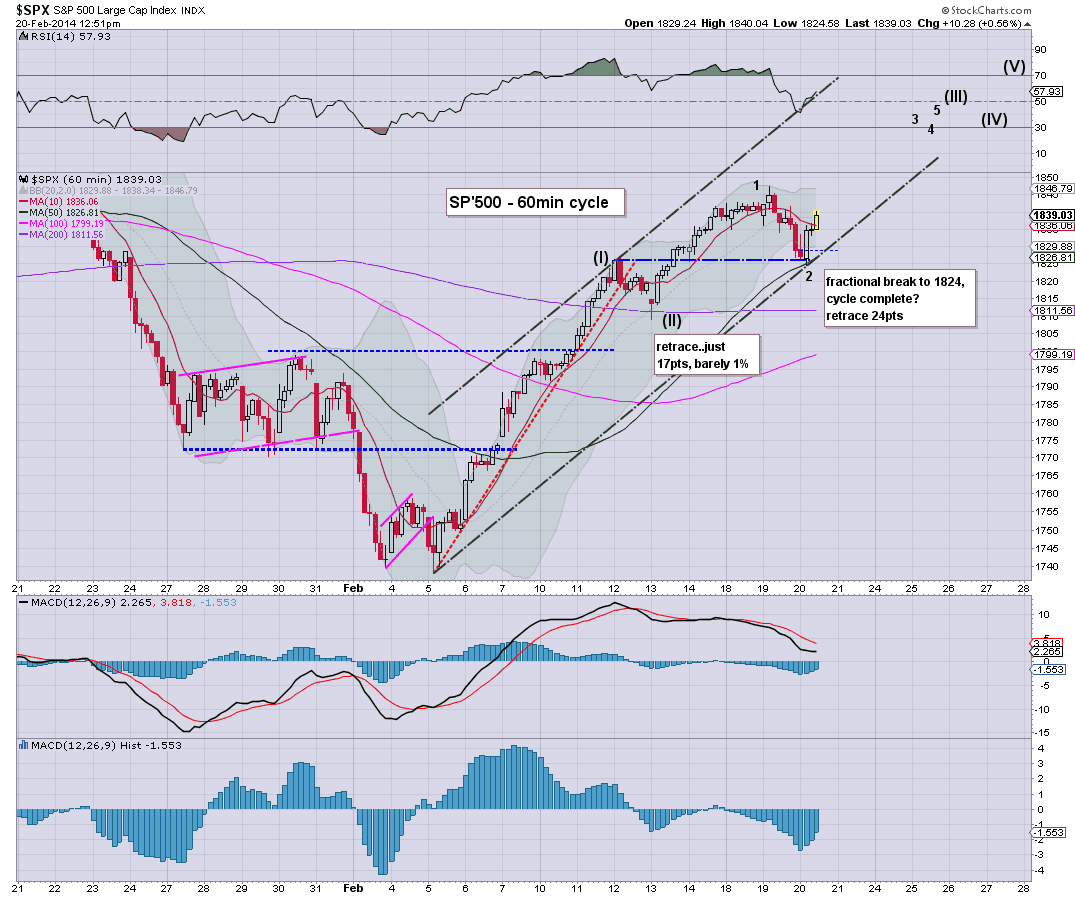 So...here we are...and all those touting much lower levels in the immediate term will probably be on radio silent for the rest of the week..if not the month.

Whilst the news from the Ukraine is bleak..and outright horrible, the US..and most world markets simply don't care. For now...thoughts are turning to the 'green shoots of spring'.

*something the bears should keep in mind..there are 3 sig' QE-pomo next week.
-- 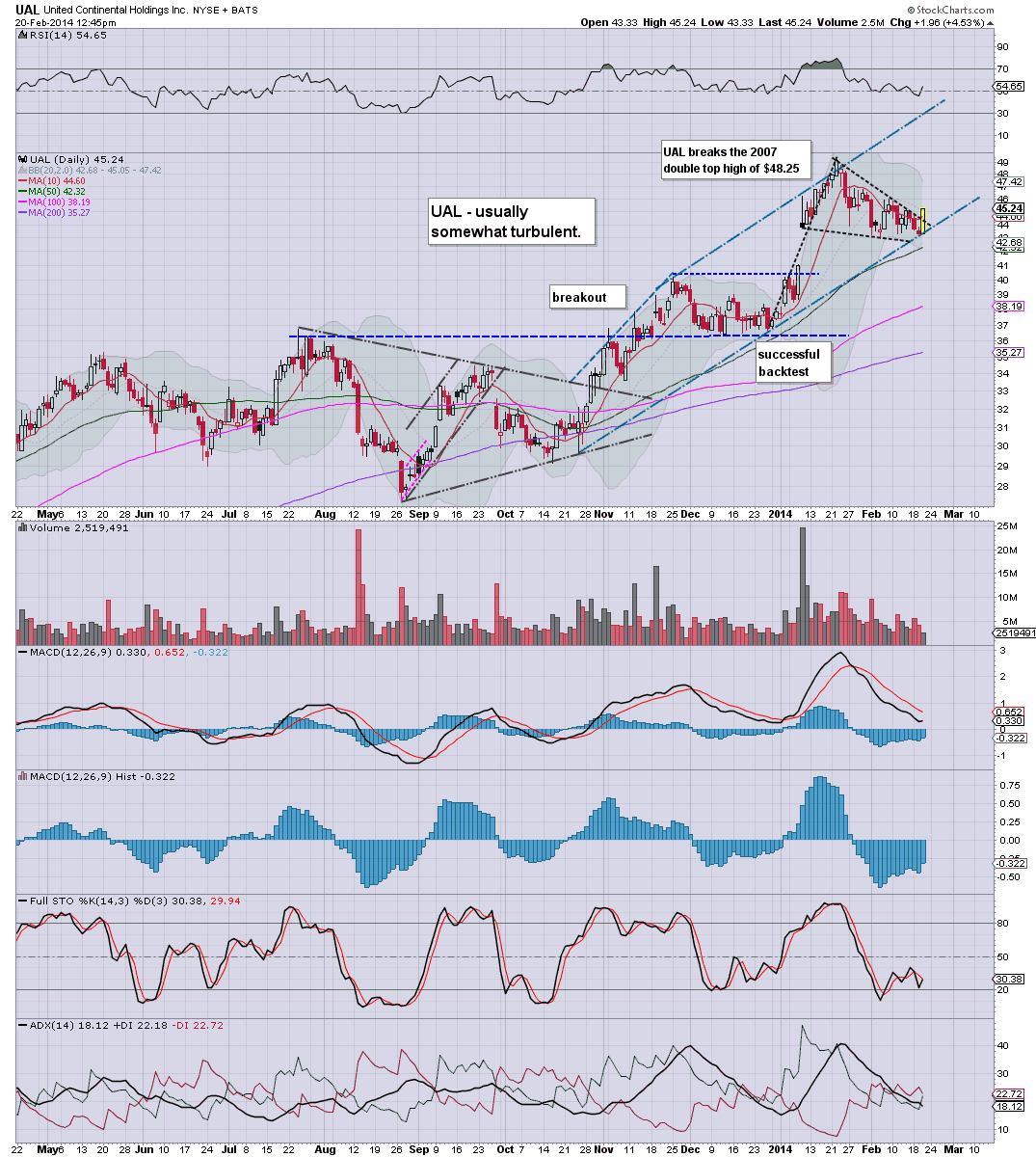 A clear bullish pennant...a breakout...new up wave well underway. Bodes well for the Transports.
-
Posted by Trading Sunset at 17:53:00
Email ThisBlogThis!Share to TwitterShare to FacebookShare to Pinterest

Equities are comfortably holding moderate gains after a brtief break lower. A daily close in the sp'1840s would be very decisive for next week, and suggest the 1900s - still unthinkable to some, are viable within the the near term. Metals holding gains, Gold +$5 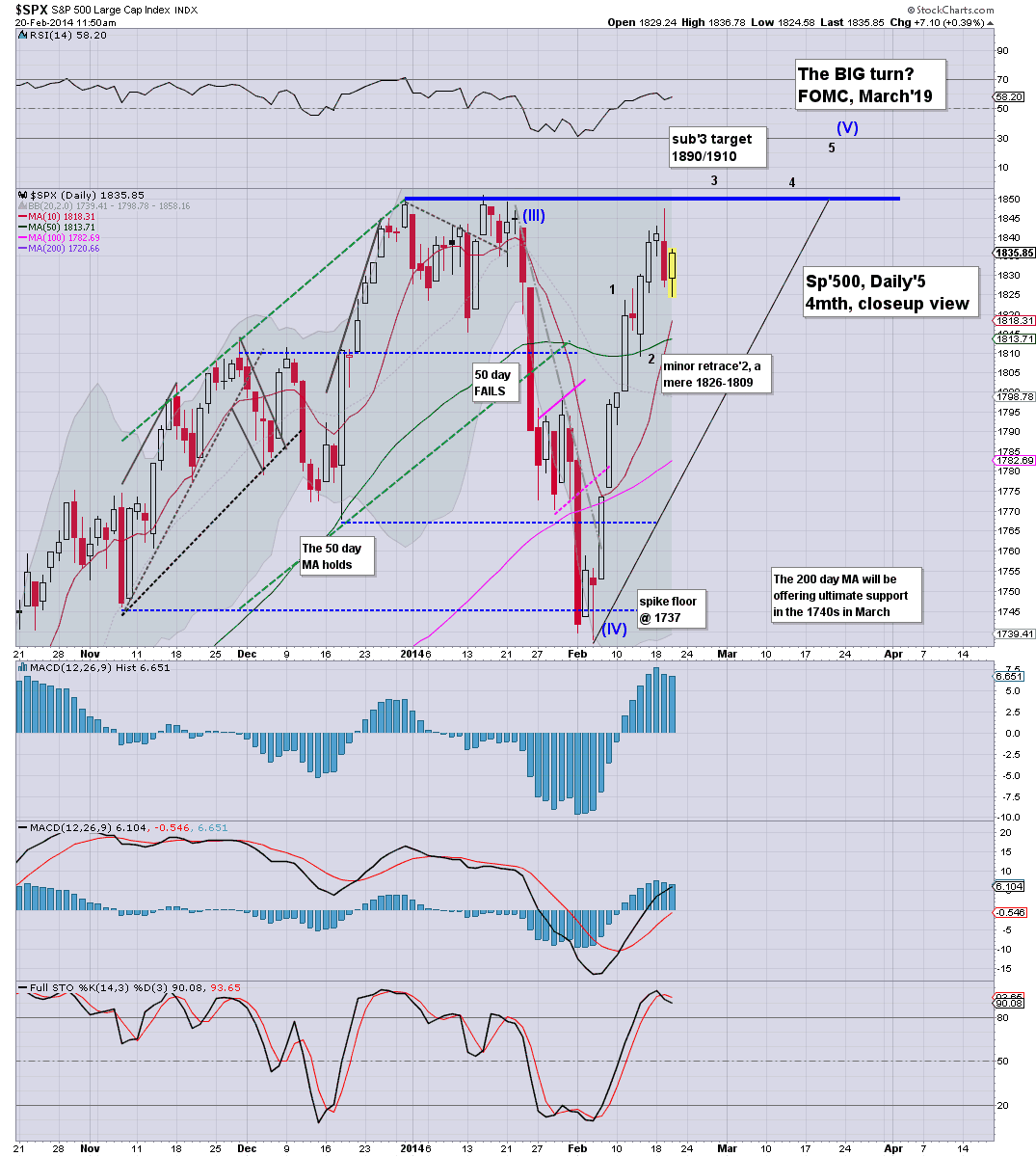 I realise some will be looking for much lower levels in the days ahead, but price action is not bearish. At best, despite some lousy econ-data, the market looks pretty strong.

The daily chart count is my best guess, and links with the bigger weekly outlook... 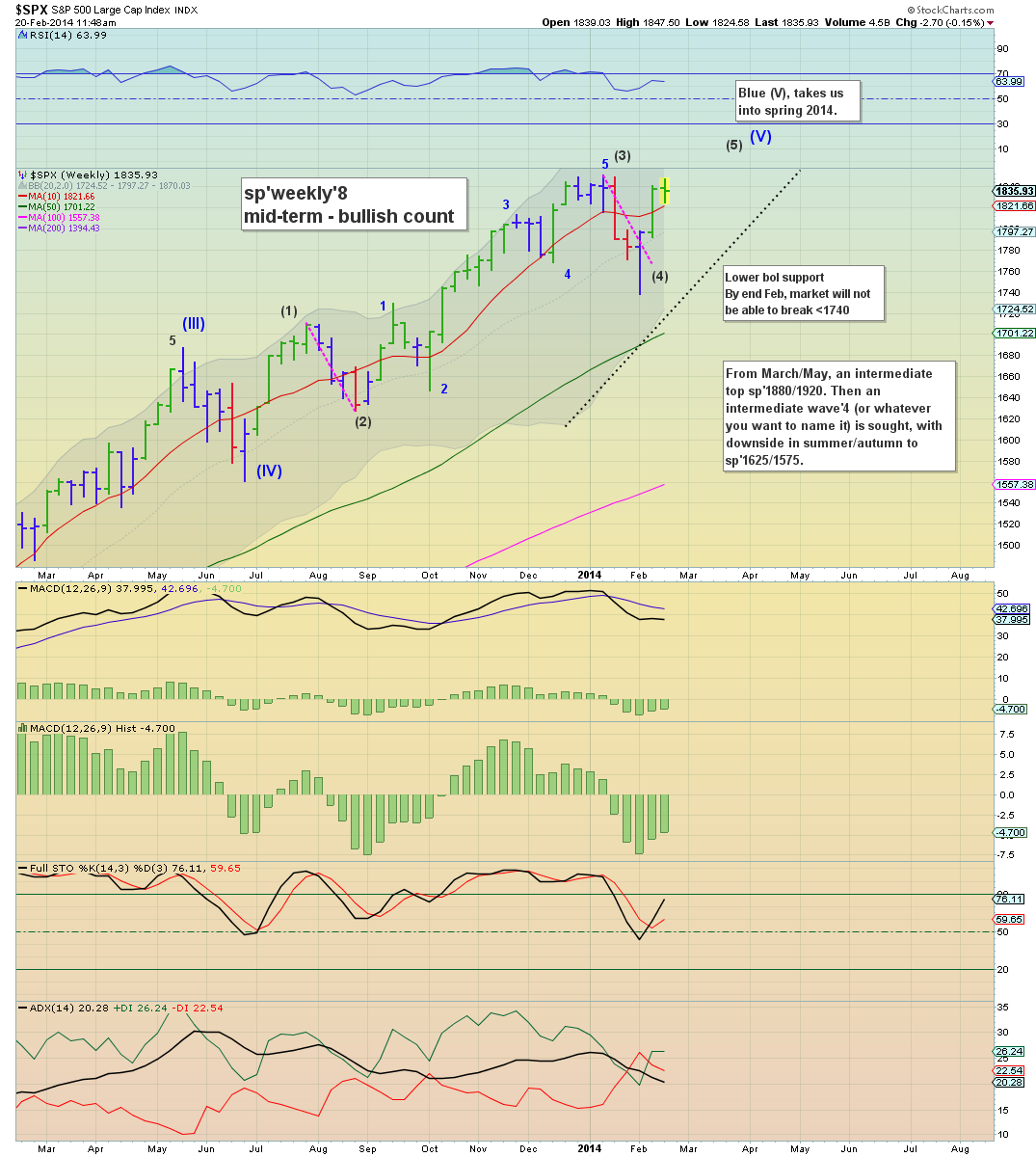 Best guess...we see a key inter'3 top...at the next FOMC, when taper'3 will probably be announced. From there, market gets trashed for a few months.
--


VIX update from Mr T (due)

*oh well, I guess the guys at optionmonster are not posting today.

Notable mover: UAL +4%..more on that this afternoon.

Holding to all original targets..that stretch back to last summer.

...just a few more weeks...
Posted by Trading Sunset at 16:50:00
Email ThisBlogThis!Share to TwitterShare to FacebookShare to Pinterest

Weak phil' fed data was momentarily enough to break the market <sp'1826...but we have since seen a very clear reversal candle on the smaller index cycles. With heavy QE today, bears look to be in serious trouble of facing equity upside into the Friday close. VIX confirms a generally fearless market. 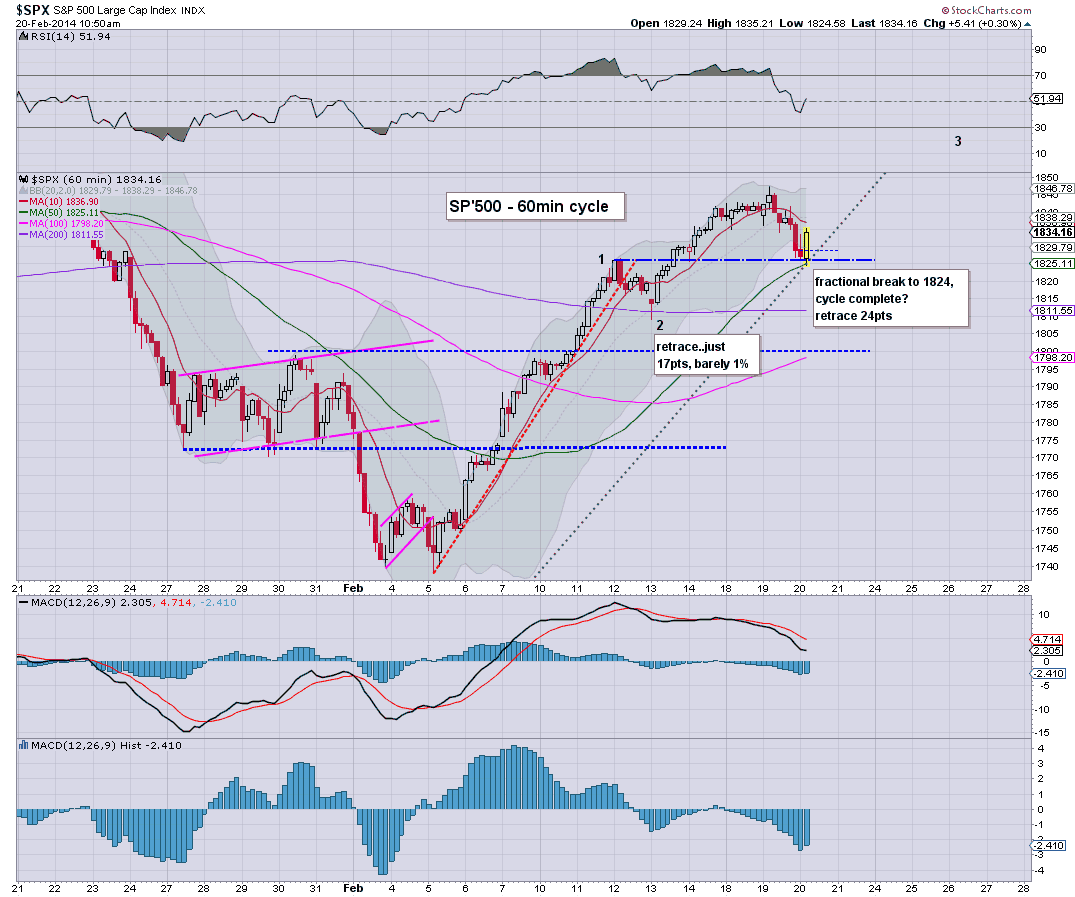 As I noted last night, the setup was never very good for the bears. Despite the closing hour weakness, the smaller cycles already looked floored.

This mornings reversal candle..and that IS what it probably is, is the strongest hourly candle we've seen since the sp'1737 low.

There can be no excuse for those bears not exiting in the mid 1820s this morning. None!
--

TSLA, holding 7% gains..after earnings.
FB -2.5%, after spending 16bn on a web app..when it could have bought any number of multi-billion 'real companies' for a fraction.
-


Q. Have you noticed the 'THEY KNOW NOTHING!' advert for Cramer on clown finance TV ?

What I'd like to see CNBC play is the clip where Cramer recommends people take out funds from the US market for five years...that was back in late 2008/early 2009.. Its on youtube somewhere..maybe I'll go find it....

11.36am...minor chop..but market is holding moderate gains. A daily close in the 1840s would be pretty decisive, and setup next week.

*thanks to a poster who pointed out today was NOT 4-5bn QE, that was Tuesday. Today was still significant though, at $2-3bn.

Next week has 3 sig' QE-pomos..bears..beware!
Posted by Trading Sunset at 15:51:00
Email ThisBlogThis!Share to TwitterShare to FacebookShare to Pinterest 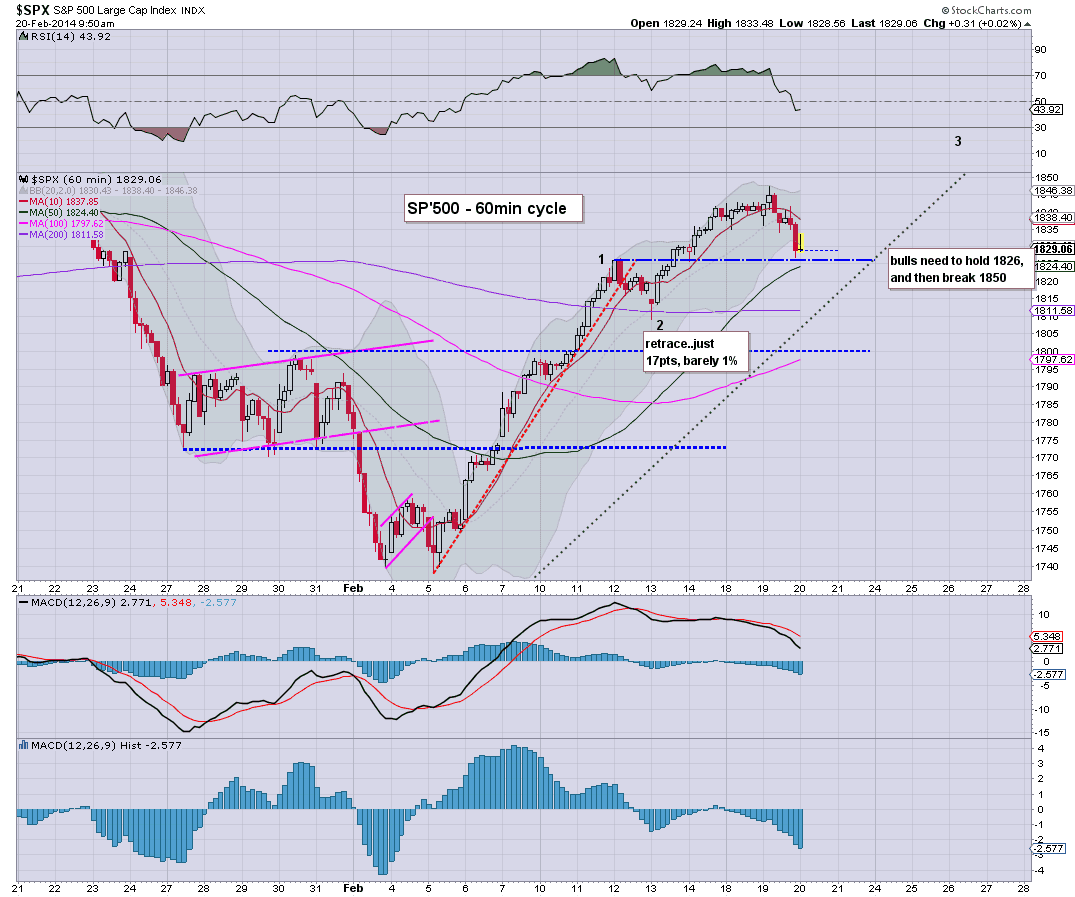 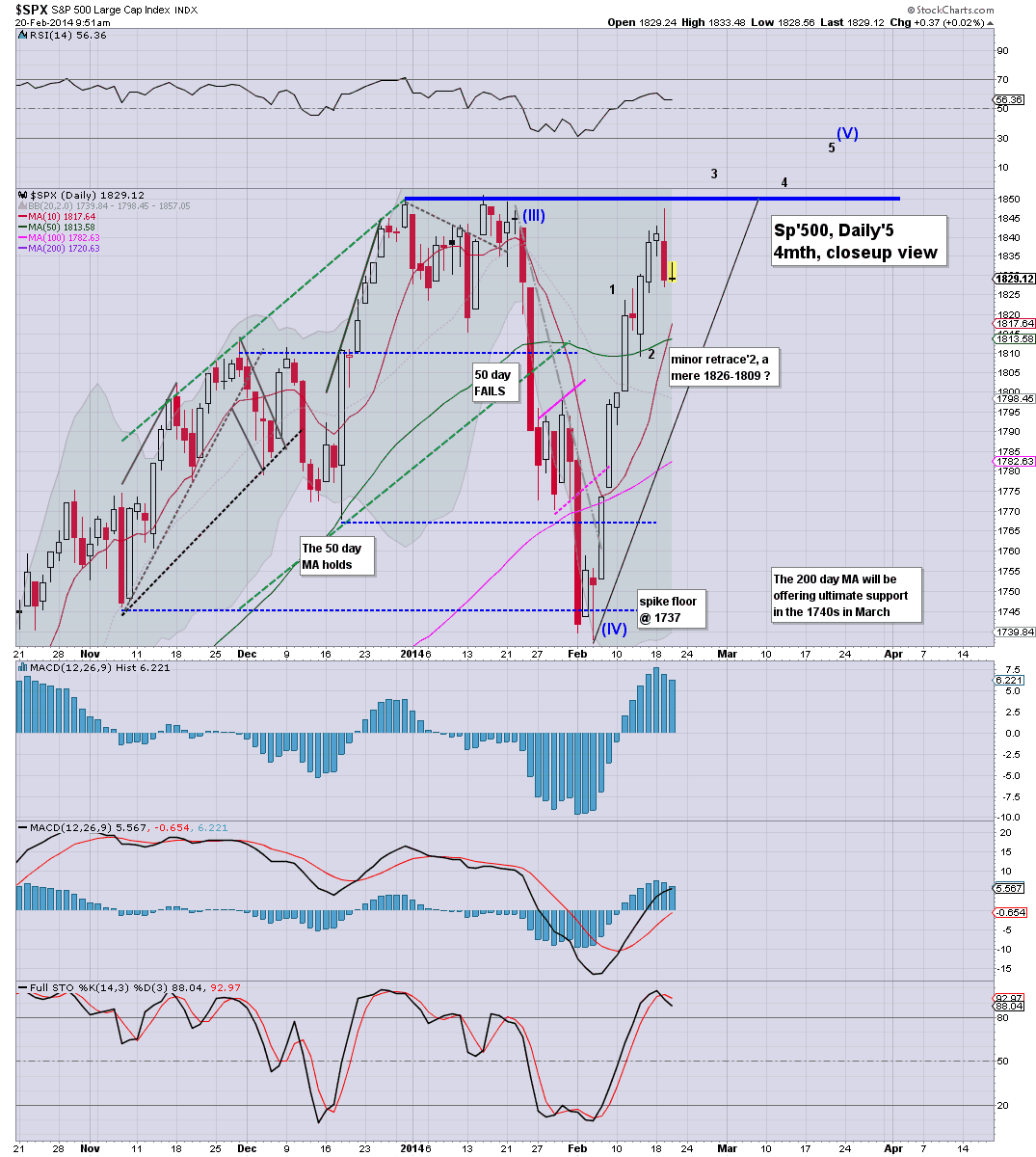 *awaiting phil' fed survey and leading indicators at 10am
---

Yesterdays daily candle sure was pretty bearish, but hey..one down day doesn't negate a trend where we ramped 110pts across 10 trading days.

Bears really should be afraid of the QE today, it is very significant at $4-5bn, and will probably be more than enough to at least hold this market above the big 50 day MA.
-

Hourly cycle offers upside for rest of the week.

Weekly charts..are what I remain focused on though..more on that later...

-
Powerful hourly candle..strongest we've seen in over 2 weeks, since the turn from the sp'1730s.
Posted by Trading Sunset at 14:53:00
Email ThisBlogThis!Share to TwitterShare to FacebookShare to Pinterest

Good morning. Futures are moderately lower, sp -2pts, we're set to open at 1826. Metals have swung higher, Gold +$6, with Silver +1.2%. Equity bears should be gunning for a test of the 50 day MA this morning, but that will be difficult. 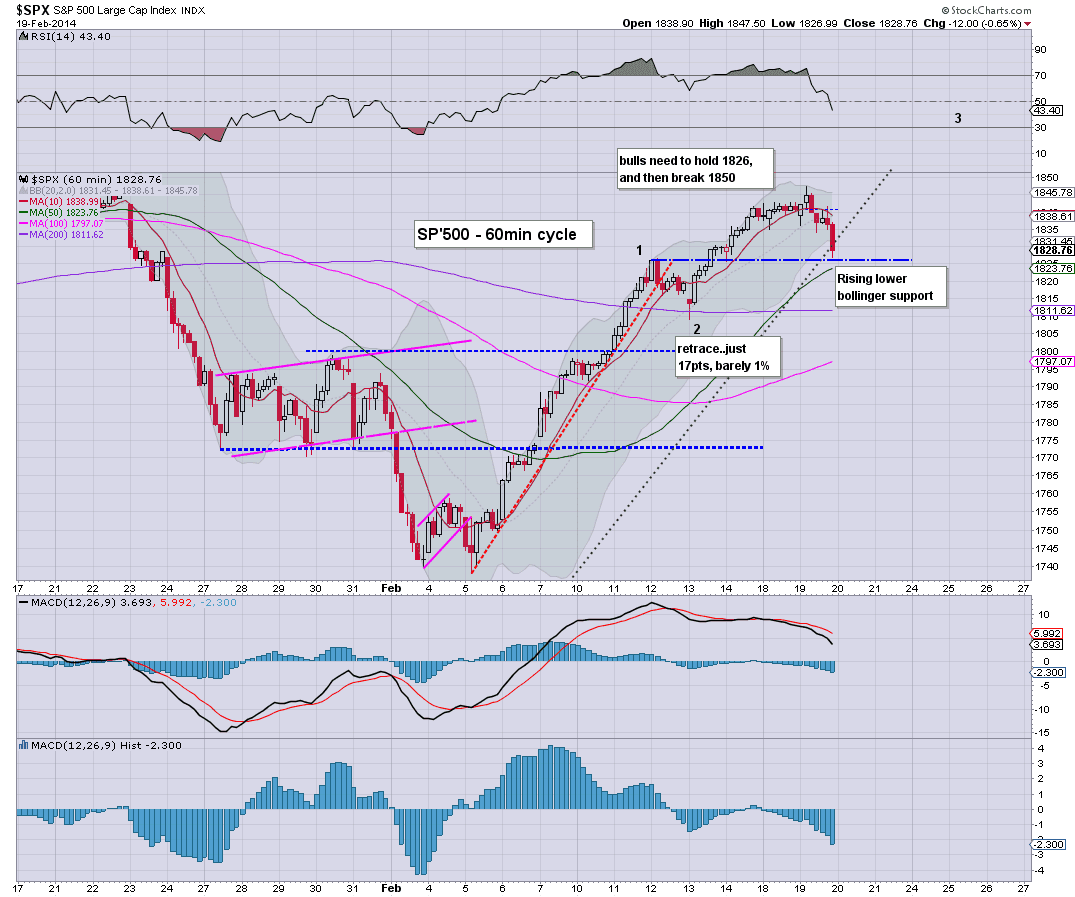 So..we've broken lower overnight, but it is nothing significant.

There is VERY heavy QE this morning of $4-5bn...bears face a massive wall to break through.
--

It is always a little bizarre when Mr Permabull is more bearish than yours truly.
--

With heavy QE this morning..bears face too tough a task.

All thats left now..10am...leading indicators and phil' fed survey.
Posted by Trading Sunset at 13:40:00
Email ThisBlogThis!Share to TwitterShare to FacebookShare to Pinterest

The daily/weekly charts are still offering another few weeks of upside, before this giant (if not monstrous) wave from Oct'2011 is complete. There are deeply serious geo-political rumblings in both the Ukraine and between China/Japan. The coming summer could be somewhat scary. 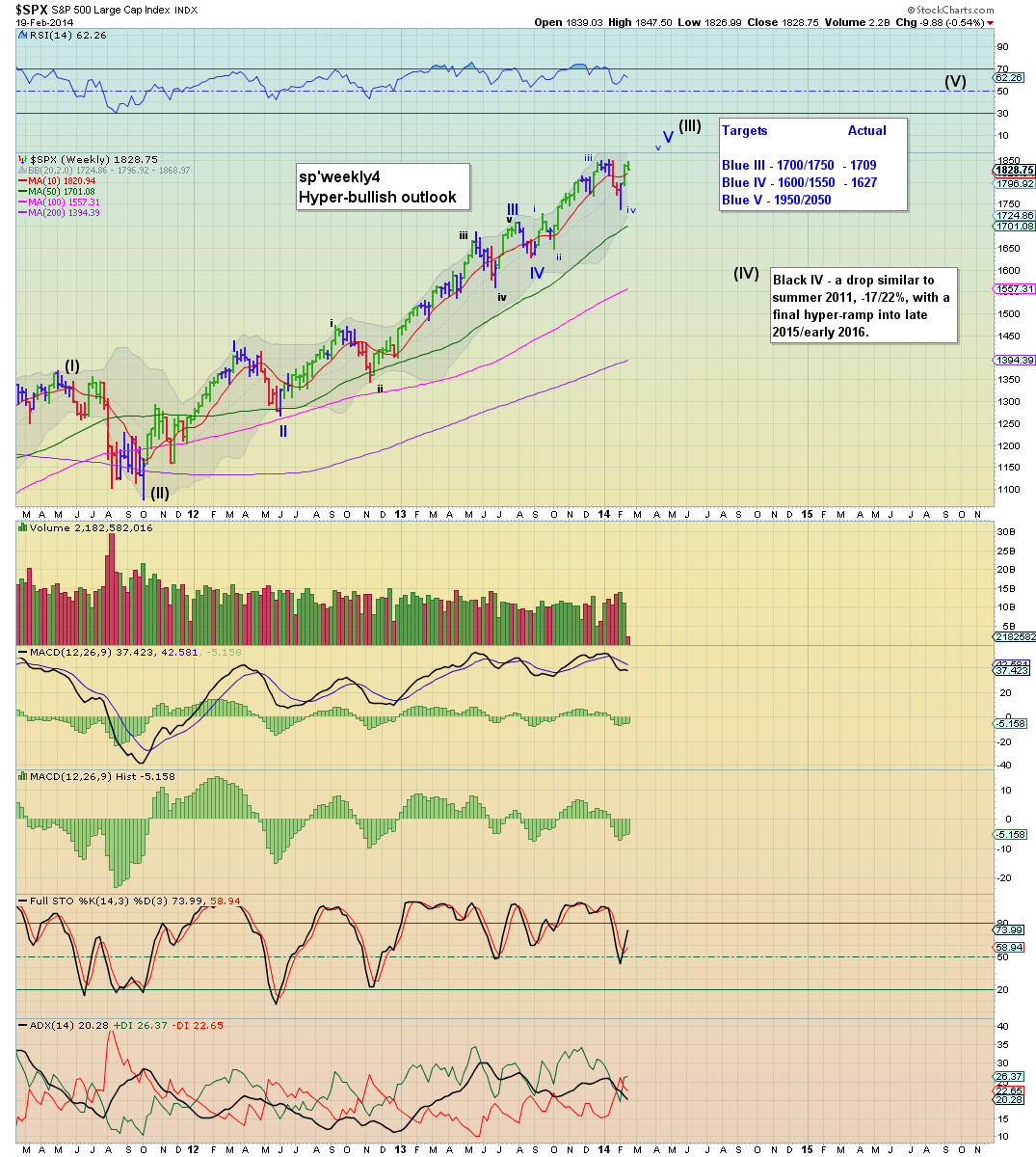 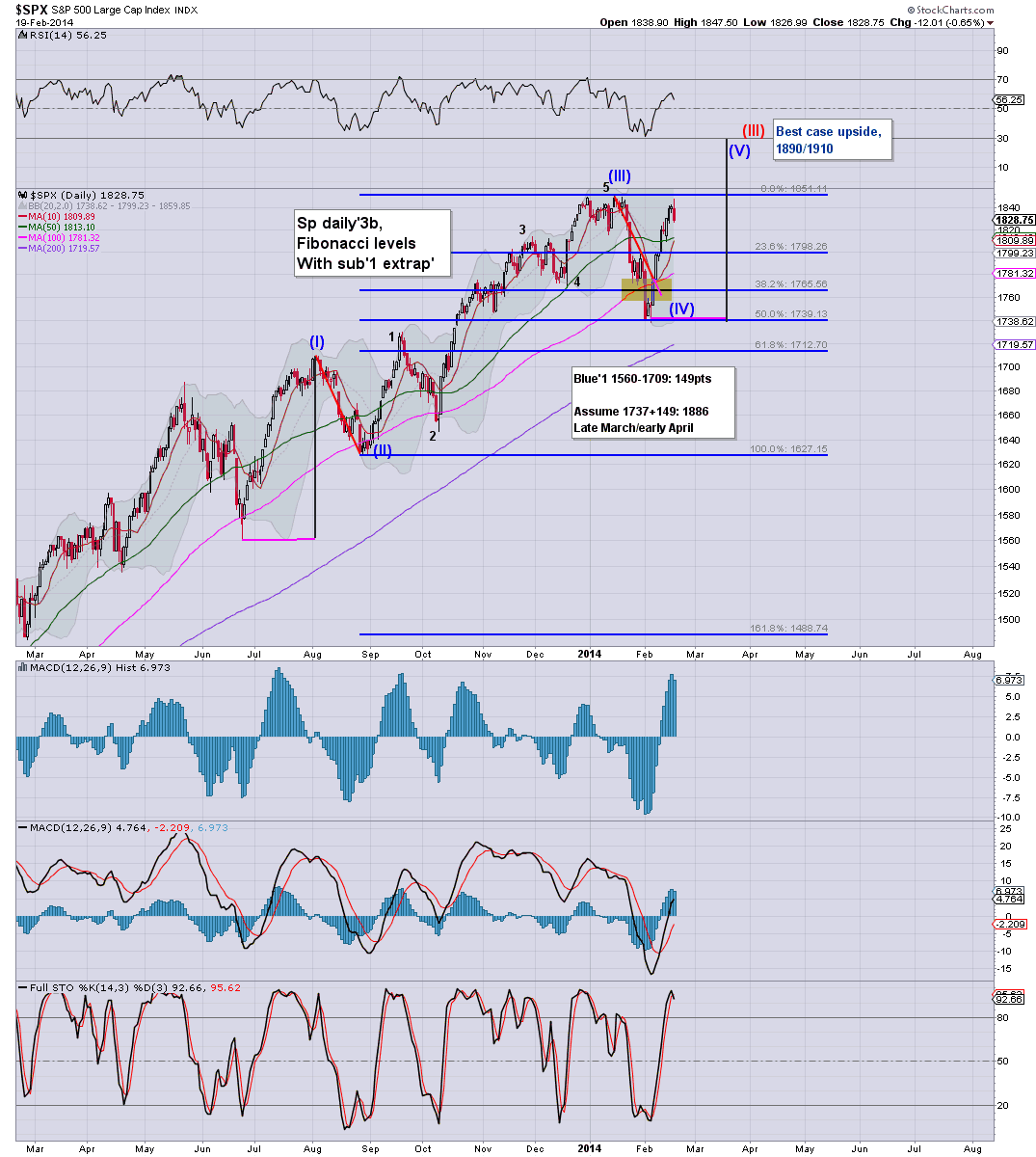 So..equities closed lower. Equity bulls can claim new highs in the current rally, but then the equity bears can equally tout a rather bearish daily candle - a 'bearish engulfing' one, with a spike top no less!

Overall, the weekly charts are still outright bullish, and so I will hold to the original outlook of a key high around the time of the next FOMC (March'19).
- 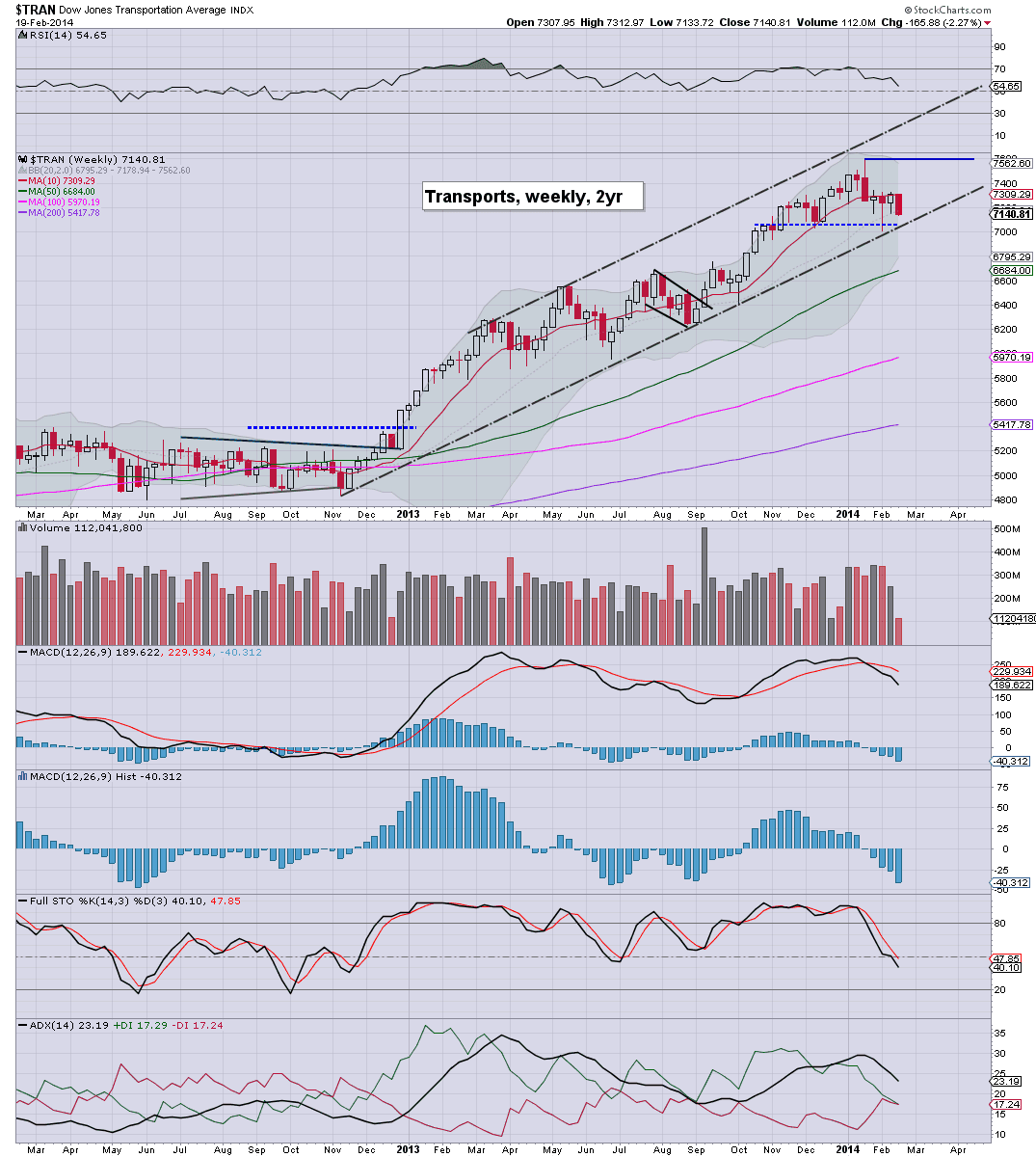 In conversation with a poster just earlier, the issue of the transports. Clearly, the 7000 level is key, and if lost, would also be a rather decisive break of the larger up trend. So..bulls have 2% of buffer zone on the Trans, and had better hold that tomorrow.
--

There is a wide array of data tomorrow, jobs, PMI, CPI, Phil' Fed, and leading indicators. There is also the Oil and Nat' gas reports. Certainly, some of that will help to give the market a kick one way or another.


The Ukraine and other 'minor issues'.

The live TV coverage in the Ukraine has been rather disturbing to see, but even more so..there is increasing chatter about a summer conflict (however brief) between China and Japan. Of course, such chatter has been ongoing for some considerable time, but this time...it does feel like the rumblings will turn into a major 'conflict' quake.

It has been my assertion for many months that the next major correction (call it a wave 4, D, or whatever), would be a result of geo-political issues, rather than underlying economic problems (not that there aren't a truck load of those). Considering the past few days of trouble in the Ukraine... I hold to that outlook.

As for the near term in market land, it sure will be interesting to see how the market deals with taper'3 at the March'19 FOMC. Again, it remains ironic that the Fed should be afraid to not taper, for fear of looking weak. Oh well, at least the months ahead won't be boring!

So...Thursday morning..if we are -16pts or more..then bears have a chance to wreak some havoc. As it is, with the QE..and from an hourly MACD cycle that is already low, I still think the setup is lousy from the bearish perspective.
Posted by Trading Sunset at 04:00:00
Email ThisBlogThis!Share to TwitterShare to FacebookShare to Pinterest 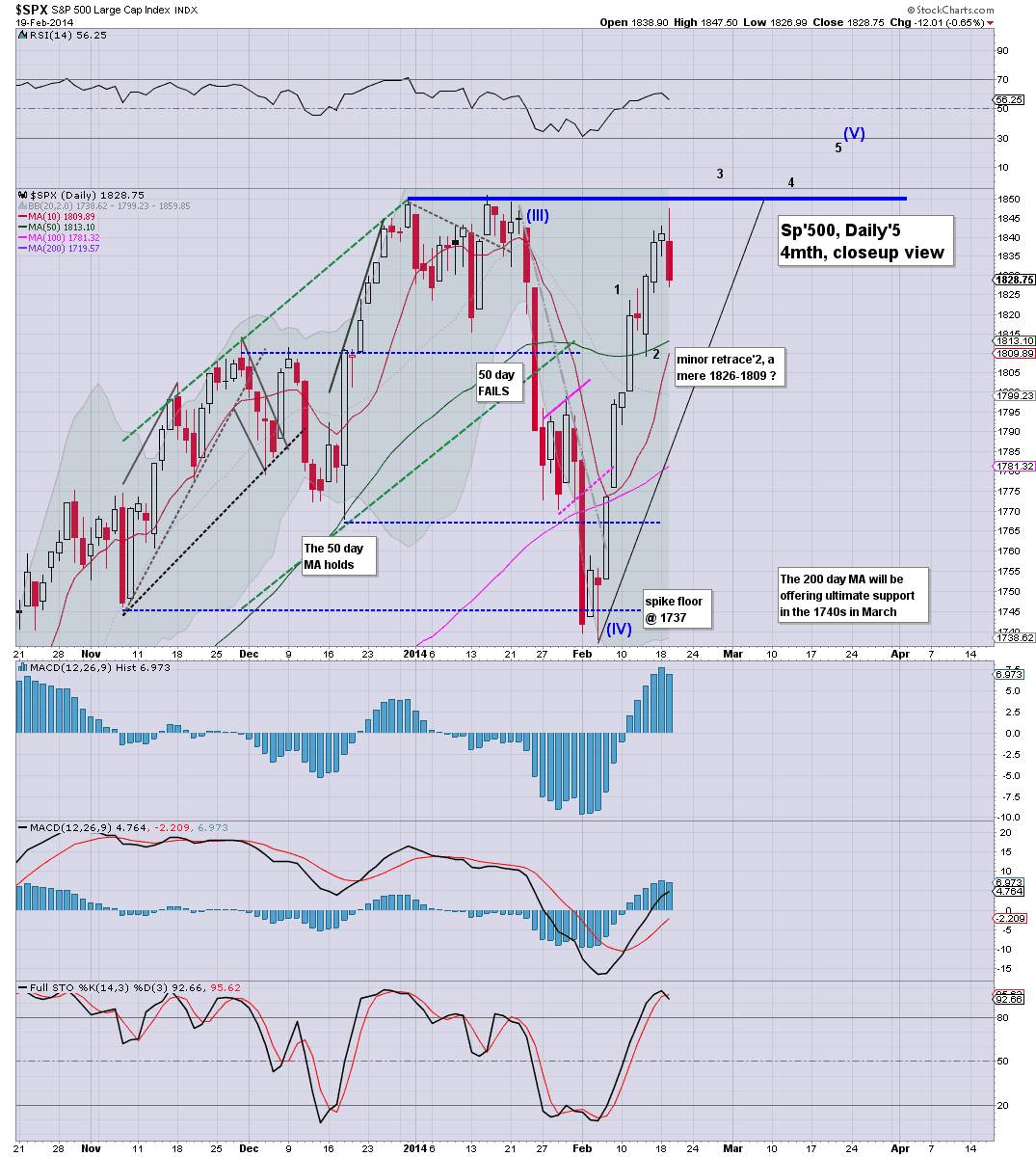 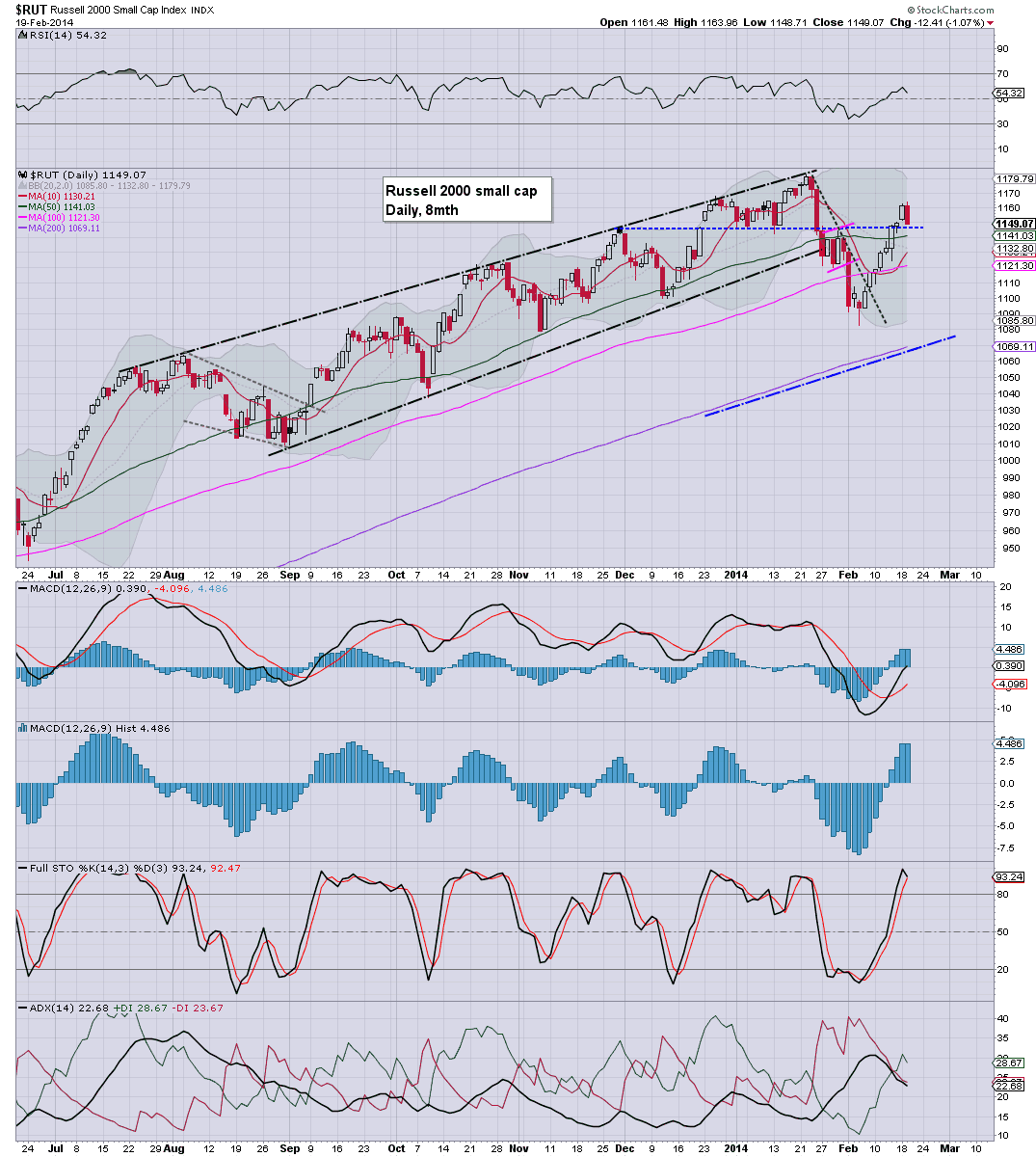 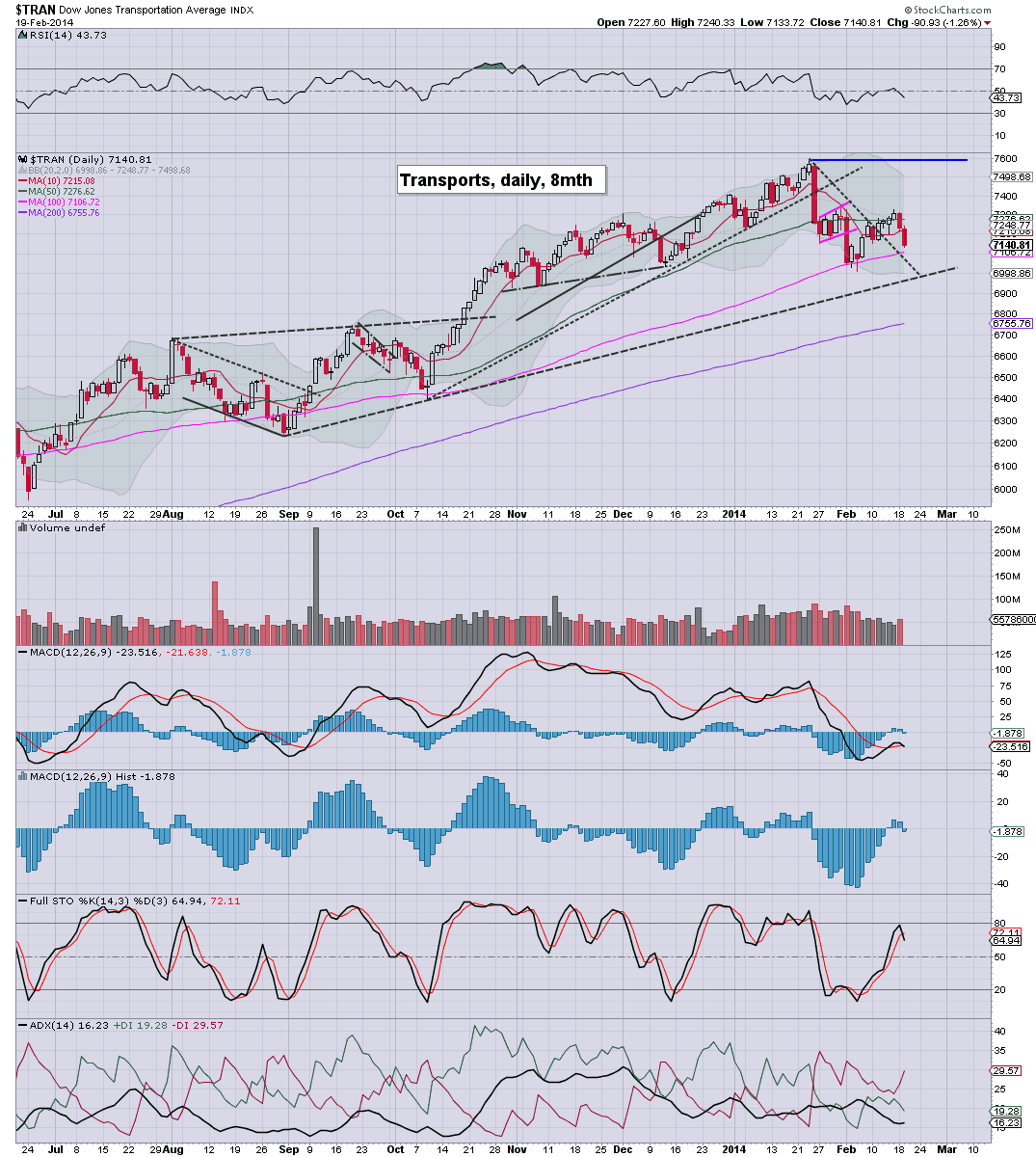 However, equity bears need to take out the recent sub' wave top of sp'1826, before any hopes of significant downside can be considered viable.