The VIX was something of a mystery today. With the indexes losing over 2% today, VIX 'only' closed up around 10%. The opening VIX move of 8% soon failed..and VIX even went red at 11.30am. The close was somewhat bullish volatility, but still, the VIX appears to either simply be lagging, or is warning that an index floor is about here. 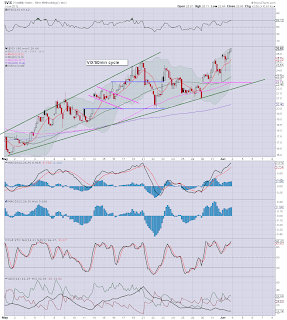 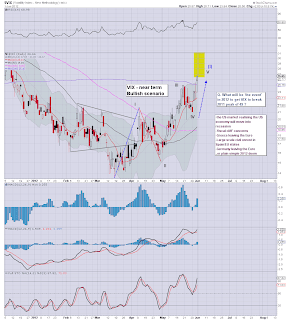 VIX closed well into the close, and we are sitting in the target box on the daily chart. The VIX weekly cycle still offers slightly higher levels of 29/30 next week.

Closing Brief - a reasonable week for the bears

I say 'reasonable', since it really wasn't that major a down week, around 3% for the sp' - of which most of that was today. So...a bearish week, but those bears getting excited need to keep things in perspective.

Lets look at how those hourly cycles closed... 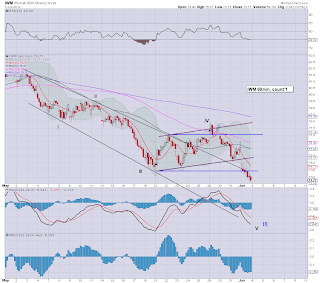 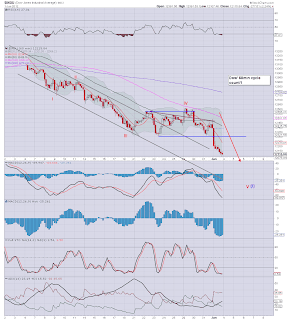 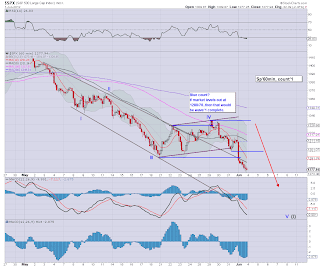 The usual intra-day bounce that the market usually provides after an initial gap down failed to occur. Instead, we saw a rare 'gap and go' day.

The VIX remains the mystery of the day though, it opened weak, went briefly red, and even though it closed +10%, that still is less than half of what I would have expected considering the index declines.

More on the VIX..later.
Posted by Trading Sunset at 21:02:00
Email ThisBlogThis!Share to TwitterShare to FacebookShare to Pinterest

3pm update - time to wrap up another week

Well, the market has fallen lower than just about anyone suggested today. The break below sp'1284 - the 200 day MA, arguably suggest further downside next week.

There are two main count ideas out there, the first is that this is the conclusion of main wave'1..and now we 'somehow' rally for a few weeks, before a major wave'3 lower in mid June. The other idea is that we'll just keep falling to the low 1200s. From a chart perspective, the latter theory seems more likely - although I'm still looking for some kind of bounce. 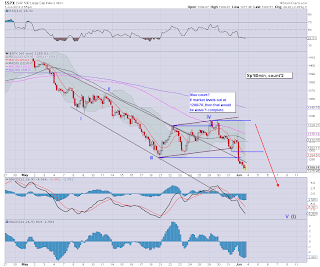 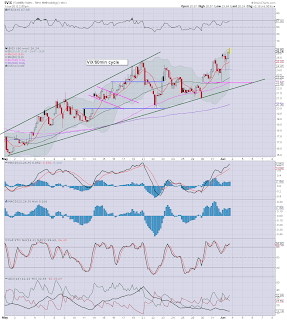 
I can't be short here, and the 60min cycle is too low to re-short, so I'm going to sit it out across the weekend.

More after the close*

--
*there are SO many bearish sell signals triggering today across the monthly charts, I really not sure what to cover in this weekends posts!
Posted by Trading Sunset at 19:56:00
Email ThisBlogThis!Share to TwitterShare to FacebookShare to Pinterest

The market breaks the sp'1280 level, so low 1270s/60s would appear likely early next week. The cycle target of 1225/00 seems very viable within 5-7 trading days. VIX still weaker than it should be, but its just broken a new high...so maybe we'll just keep on falling into the close? 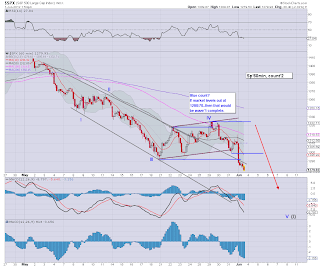 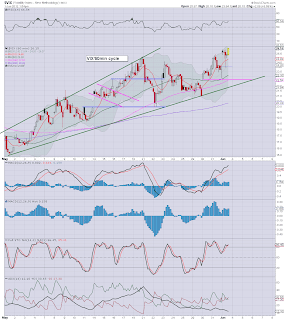 I can't re-short with the 15/60min cycles as they currently are, there remains significant risk of a 1% bounce at any hour - as we saw only yesterday!

If we don't rally at least to 1295..I think I'll sit this out until next Monday. We could easily gap up 1% at the Monday open - whether for 'technical oversold' reasons or for some baseless nonsense rumour.

Bears merely need a close under 1300 to confirm the main daily trend, and besides, the monthly cycles are all warning of much lower levels to the low sp'1100s anyway.
Posted by Trading Sunset at 18:56:00
Email ThisBlogThis!Share to TwitterShare to FacebookShare to Pinterest

I'm still waiting for some kind of bounce, so far we're just not seeing it. Yet the VIX is still not adequately confirming todays drop in the indexes. 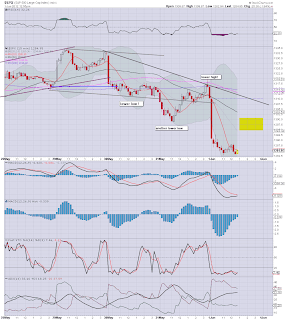 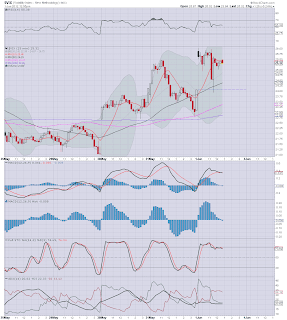 
You can see the MACD (blue bar histogram) cycle on the Sp' has reset back to almost evens, so we're arguably already halfway in the cycle - with prices merely trading sideways.

*all the bigger monthly cycles today confirming my overall target of sp'1100. If you read my posting last night on the VEU, you'll know that is warning that 1100..will not hold as a floor.

More later
Posted by Trading Sunset at 17:56:00
Email ThisBlogThis!Share to TwitterShare to FacebookShare to Pinterest

The VIX remains really bizarre, and was actually red just earlier. I'm not sure what to make of this. VIX 'should' in theory have opened up 20% to around 29. Instead, 8% to 26. 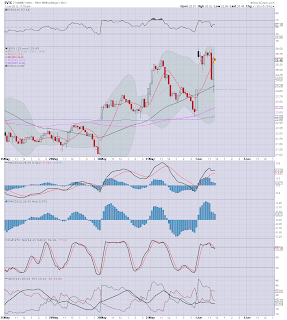 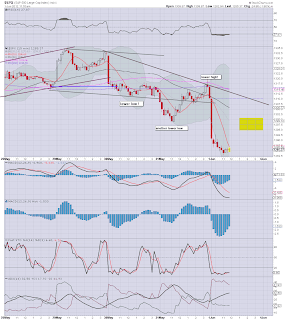 Today is interesting so far, the econ-data confirms my overall underlying view - and also my primary monthly cycle target of sp'1100 within a month or so.

I remain looking to re-short after 2pm...preferably sp'1295/1300 or higher.
Posted by Trading Sunset at 16:55:00
Email ThisBlogThis!Share to TwitterShare to FacebookShare to Pinterest

With the VIX failing to adequately confirm the decline in the indexes, I'm glad to be back to cash. This market is not to be trusted, and when I see a black candle on the VIX at the open - with reversal candles on the Rus'2000 index, that's a real warning that the bears probably have it 'as good as it gets'.

However, I'm still bearish into next week, and I remain looking to reshort after 2pm, maybe around sp'1295/1300. 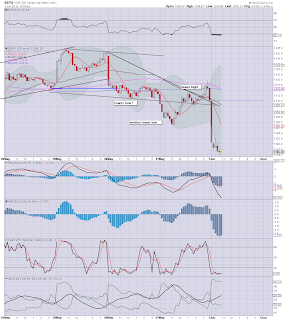 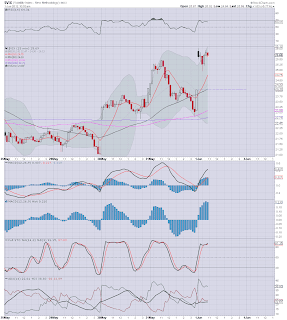 VIX is putting in a double top on the intra-day 15min - the indexes are arguably doing the same with a double floor.

More later...
Posted by Trading Sunset at 15:55:00
Email ThisBlogThis!Share to TwitterShare to FacebookShare to Pinterest

10am update - VIX is NOT confirming this move

Considering the mood out there, the VIX should be  higher...much higher. Either the market has considerably further to fall today - with the VIX moving to +20%, or the lows for the day are already in.

The daily index cycles are of course important, and they do suggest much lower levels, yet....bears need to be careful today. 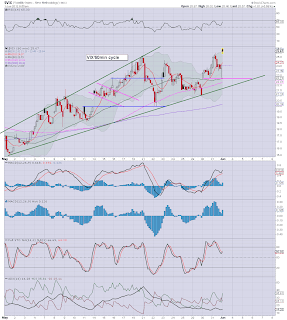 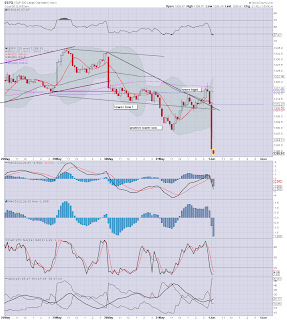 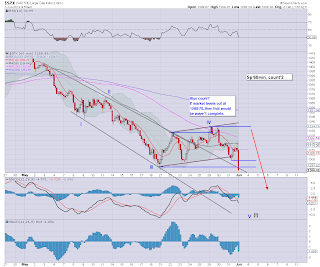 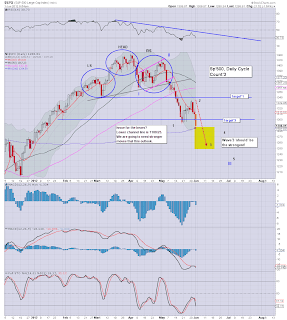 I remain short, but looking to exit this hour...and re-short after 1pm.

More across the day.
Posted by Trading Sunset at 14:56:00
Email ThisBlogThis!Share to TwitterShare to FacebookShare to Pinterest

*there is also some key econ-data at 10am, so bears should look for a secondary down wave to begin around then. . 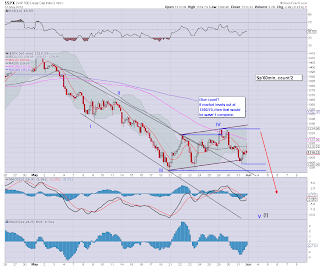 
I am short, looking for a temprorary exit around 1285 later this morning. I look to reshort by late afternoon, with new lower target of 1225/00 end of next week.

Good wishes for Friday..and all of June !

Since I started posting here - some three months ago, the world index monthly charts have become the foundation for my overall outlook. Since January we have seen the world indexes rollover one by one. The US indexes have remained stronger than the rest of the world (the Bernanke Put?), but even the US markets have shown a clear rollover since the April peak. 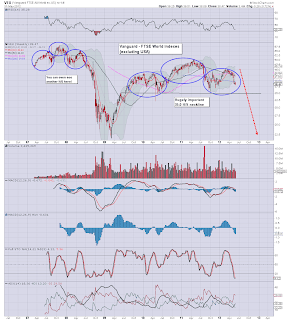 The above chart was inspired by an original by John Murphy from Stockcharts.com. I was not aware of 'VEU', but its actually something I will most certainly refer to regularly in the months ahead. The VEU gives a good summary of the world indexes - but excludes the US indexes. 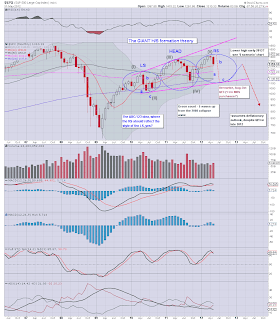 You can see a key difference between the world indexes (VEU) and the Sp'500 chart. The US H/S formation is very lop sided to the upside, whereas the world index H/S formation is flat. I suppose anyone could list many reasons why this might be so, but the main one is probably none other than 'him'....the Bernanke, and his regular bouts of QE..Yes the USA is a stronger economy than most out there - and thus should perform better, but still, I'm guessing we don't have a flat H/S formation because of the printer man.

The VEU chart I believe is starkly bearish, and should scare the hell out of anyone with long term stock holdings. We presently have a GIANT head/shoulders formation, just as we did in 2007/08 - before the collapse wave. Except the latest H/S formation started from a lower price level..and is twice as big in both price range and time scale.

I believe the VEU chart is clearly warning of a collapse wave - on a scale similar to that seen in 2008. As noted, the 35.0 level will be a critical level for the bulls to hold. A break under 35 will surely qualify as a giant red flag for investors across the world.

I hope this chart provokes some of you to consider the bigger picture of world equity markets, I do think its important, and I will return to it regularly - not least since its a great way to summarise 'the rest of the world' in one single chart.

We have a busy Friday ahead (5 sets of econ-data) including the big monthly jobs data. Market is expecting 150,000 (although estimates have been dropping in recent days). I'd guess anything under 100k would disappoint the market, anything under 50k...and we should in theory be looking at sp -25/30pts by the close of trading. As ever, bears should look to the VIX for confirmation if the market is -1% or more.

Despite a crate of lousy econ-data this morning, the market still managed a latter day recovery, but closed marginally red - with the VIX closing flat in AH.

However you might like to count the waves, what IS clear is that we have a giant bear flag on the daily indexes...and the trend is warning of major downside in the coming days. 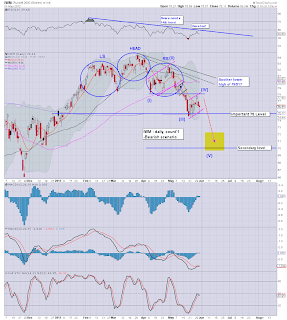 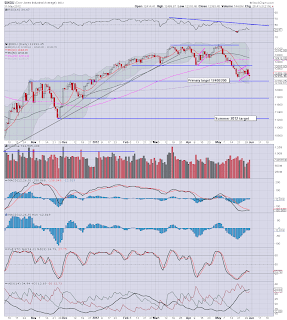 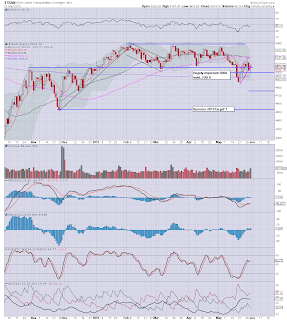 The transports was the first to break the daily bear flag, the Dow did that today, the Sp/IWM were borderline breaks.

I remain bearish, and am holding short into Friday, and probably into next week.
--

I've not read around too much lately, but what I have seen are other chartists with targets in the 1280/70 range...and as low as 1225/00. Those make sense to me, and indeed, when we are at the 1280/70 zone, it will be interesting to see if the market can keep pushing lower.

Right now, I just don't know how low we might go. The monthly charts suggest much lower levels of sp'1100, but that might not be for a few months.