With the main indexes seeing new highs, the VIX remains trundling around in the low teens, settling +1.3% @ 13.33. Near term outlook is a VIX that will likely spike no higher than 15/16, before another wave lower to the 11s, even 10s before year end. 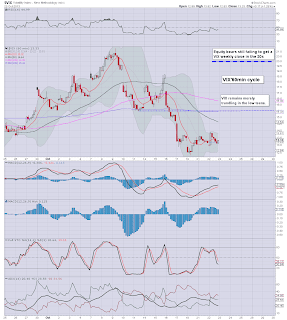 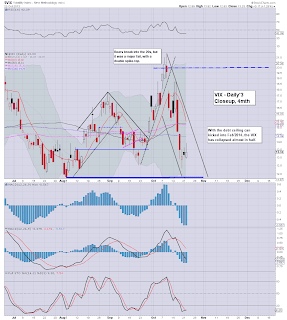 There is virtually nothing to add. The main equity market remains strong, and the VIX looks set to remain in the low teens for the rest of the year.
-- 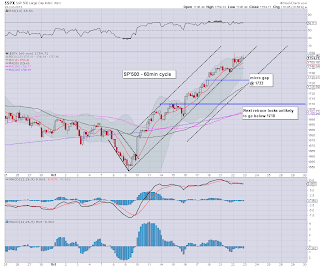 For the equity bulls out there, another great day. Regardless of any minor down cycle in the remainder of the week, with the market breaking new highs - across most indexes, the trend looks ever more secure to the upside.

-
more later..on the VIX
Posted by Trading Sunset at 21:01:00
Email ThisBlogThis!Share to TwitterShare to FacebookShare to Pinterest

3pm update - another day, another high

The main indexes are holding comfortably in new territory, with the sp' making a play for a daily close in the 1760s..which would be extremely impressive. Bears are utterly powerless, with mainstream consensus now realising QE-taper won't happen until at least spring 2014. 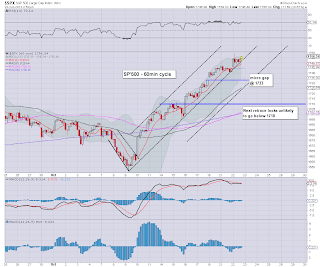 *precious metals holding gains, whilst Oil is very weak, having broken support a few days ago.
--

Whether we close in the sp'1750/60s..entirely irrelevant. What does matter...primary trend remains to the upside, and those sp'1800s are viable in November.

What I find surprising is just how overly cautious even the cheer leaders are on clown finance TV about the current rally.

--
NFLX remains a fascinating one to watch. Big opening reversal...net losses, and now we'll see how many bull chasers want to come in again in the low 300s. 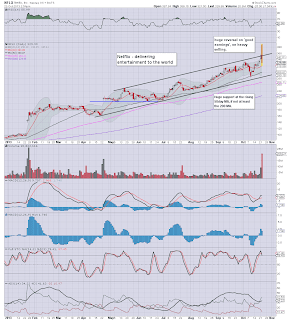 A closing hour ramp for NFLX looks very viable. All the big selling has already been done.
Posted by Trading Sunset at 19:55:00
Email ThisBlogThis!Share to TwitterShare to FacebookShare to Pinterest

The main market is comfortably holding moderate gains, with the sp' in the 1750s. The NYSE composite is back in the 10000s, for the first time since Oct'2007. Anyone touting big declines in the near term needs to have their trading screens...removed. 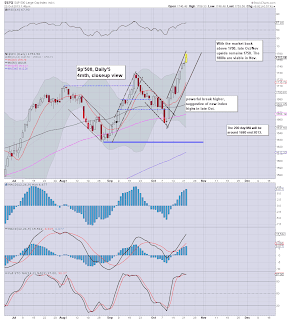 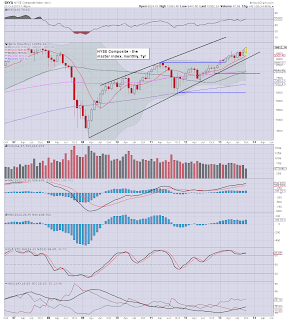 Little to add, trend is up.

Shear lunacy for anyone to be top calling with price action/structure as we currently have.
-

Ohh, but some will highlight divergences on the bigger monthly charts. Yet, price is what matters, and price is going UP..
Posted by Trading Sunset at 18:53:00
Email ThisBlogThis!Share to TwitterShare to FacebookShare to Pinterest

The main indexes are holding moderate gains. Most notable, the NYSE Comp' broke 10k today, with the Trans' coming within 25pts of hitting the big 7k level. Regardless of any minor weakness in the remainder of the week, underlying upward pressure is strong. 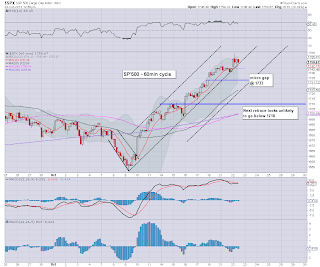 A baby bull flag on the hourly index charts? There is an obvious gap in the low 1730s, and maybe that will be filled later this week. Yet..that minor downside doesn't merit a short-side trade, Overly risky, whilst the broader trend is strongly upward.
-

However you want to count this nonsense, this remains a VERY powerful up wave from the sp'1646 low..which as of this morning was 113pts lower!
- 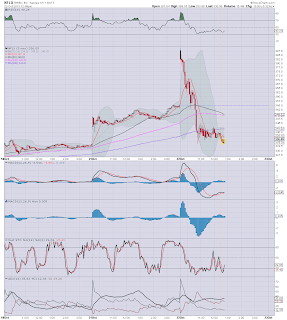 NFLX remains entertaining to watch...its holding the 330s..and there is real risk of late day closing ramp. Prime time for a snap higher...2.30pm or so.
Posted by Trading Sunset at 17:52:00
Email ThisBlogThis!Share to TwitterShare to FacebookShare to Pinterest

Whilst the main indexes continue to battle higher, the top callers are at it again. After all, we've already pulled back from the earlier sp'1759 high, its all downhill from here..right? The same old nonsense is being touted again..despite NOTHING changing. QE continues, that is all that matters. 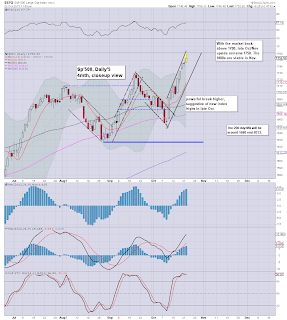 I'm beyond tired of this crap today.

Same old people calling a top, who will no doubt be doing the same thing next month..and for what will probably be another few YEARS before the current cycle is complete.
-

I see 'springheel jack' is open to my hyper-bullish outlook. At least someone else out there is starting to consider the unthinkable.
-

I'm almost tempted to just throw an 'sp'4000' chart out there EVERY day for the next month, if only to annoy the idiots still calling tops (are you listening Daneric?).

In the past few days the mainstream has really turned around, and consensus is now shifting to QE remaining at $85bn until the spring. No doubt, when we get to spring 2014...it'll be 'ohh, taper might start in June'. Tiresome huh?
-

time for lunch. I sincerely hope that improves my mood. Urghhh
Posted by Trading Sunset at 16:56:00
Email ThisBlogThis!Share to TwitterShare to FacebookShare to Pinterest

11am update - here they come again

The main indexes are holding moderate gains, with the sp peaking at 1759. That could very easily be the peak of the week, certainly, we're scraping along the upper bol' on the weekly charts. Regardless of any minor down cycle, the primary trend remains powerfully to the upside. 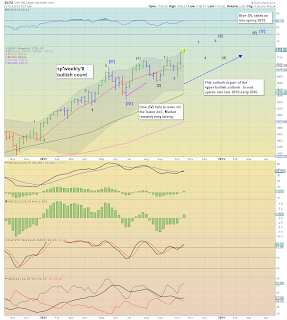 No doubt we'll see a truckload of posters across today, and particularly after the close touting a 'this really is it this time' top calling.

It is ALL nonsense.
-

Even more laughable..we could pull back to sp'1730/20s...and I can just imagine the bearish hysteria out there. 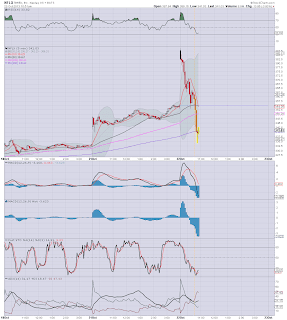 The opening black candle warned of trouble. Looks like we have a spike floor, and things should stabilise from here.

Congrats to those shorting from the $390s, and who exited in the 370/350 zone this morning. Risky though, whilst the primary trend remains strongly bullish
Posted by Trading Sunset at 15:54:00
Email ThisBlogThis!Share to TwitterShare to FacebookShare to Pinterest

The main indexes continue to push higher, with the sp' breaking into the 1750s. A great many out there are seeking a mid, even long-term cycle top in the 1750/60 zone, but frankly..there is absolutely zero reason why that will be the case. The sp'1800s look very likely next month. 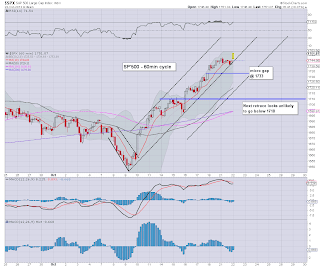 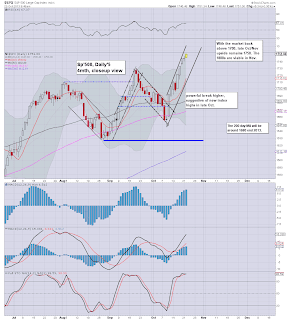 More than anything, I realise a lot of good chartists out there are calling a top in the current zone, but really, it makes ZERO sense to me why this freight train of a market will stop here.

How many times are we going to see people call a top whilst the QE continues?
-

Stock of the day... NFLX 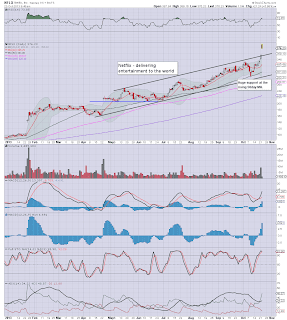 The hysteria is back in full...and the $400s look likely. whether later today, tomorrow, or whenever.
The opening black candle is kinda interesting, but really, anyone want to short against the primary up trend? Urghh
-

10.22am.. hourly MACD cycle goes positive, and the 1760s now likely in the immediate term.

ZERO reason why this will stop. There is NO power on the bearish side.

QE continues. This market is going...UP !
Posted by Trading Sunset at 14:51:00
Email ThisBlogThis!Share to TwitterShare to FacebookShare to Pinterest So...the top callers will be out in force across today/tomorrow.

ZERO reason why the market will see a multi-month top at this level.
Posted by Trading Sunset at 13:50:00
Email ThisBlogThis!Share to TwitterShare to FacebookShare to Pinterest

US equities remain on a very broad upward trend, that extends back to the Oct'2011 low of sp'1074. The sp'1800s look viable in November, and if the mainstream get a little more confident, the 1900s are briefly viable before some understandable year end profit taking. 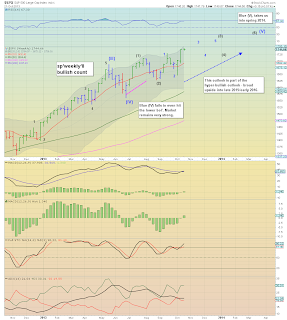 The weekly rainbow charts are showing the third consecutive green candle, and this market is unquestionably outright bullish. A weekly close in the 1755/65 zone looks very likely, with the 1800s viable in November.


Netflix - the hysteria returns in full

With EPS of 52 cents, NFLX has soared in AH trading, settling around $40 (11%) higher at $394. There seems little doubt the $400s will be hit early tomorrow, and then you'll start to see the mainstream wonder about $500 next year.

As I noted earlier today, no doubt some bears who were short this hysteria-stock on margin, will have seen their trading accounts get blown up. The thing is, its not like the primary trend in NFLX is down! Why would anyone consider shorting it at all?

NFLX, $40, with a PE of 20, and that ladies and gentleman..would indeed be a normal price in a normal market, but of course..we sure as hell don't have that right now.

I could pick any of the ten indexes that I regularly highlight, they all look pretty much outright bullish. Even the imploded Greek economy has a market that is soaring... 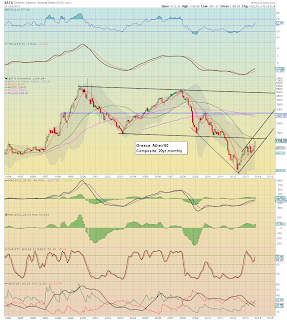 As I noted over a week ago, first target zone is 1200/1300, after that...2500. The other EU PIIGS of Italy and Spain look much the same. For those with eyes on the bigger picture, I think the direction for the US market is pretty clear.

Tomorrow will see the release of the delayed Sept' jobs data. Market is seeking 185k gains, with a static rate of 7.3%. Those are not bold targets.

*next QE-pomo is not until Wednesday.
--

The main indexes closed largely unchanged, with the sp' fractionally higher at 1744. The two leaders - Trans/R2K, closed +0.4% and -0.2% respectively. The broader market trend remains very bullish, and the sp'1800s look viable in November. 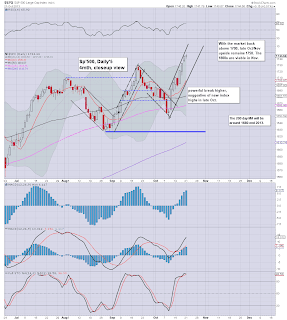 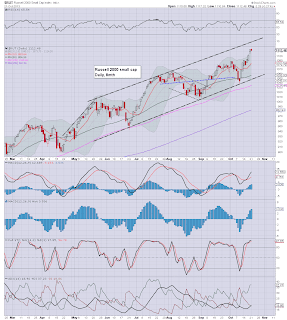 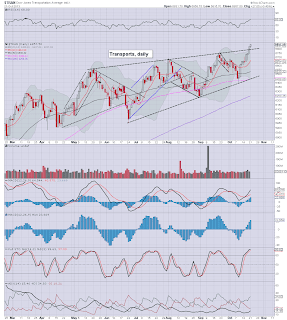 A very quiet day to start the week, and the closing Doji candle on the sp'500 was somewhat appropriate.

No doubt, many traders are just waiting for the delayed Sept' jobs data.
--
a little more later..
Posted by Trading Sunset at 01:00:00
Email ThisBlogThis!Share to TwitterShare to FacebookShare to Pinterest
Newer Posts Older Posts Home
Subscribe to: Posts (Atom)