With US equities seeing renewed upside, the VIX was back in cooling mode, settling -4.2% @ 13.30 (intra low 12.83). Near term outlook is for continued equity upside, which will likely equate to VIX remaining very subdued in the 14/10 zone. The big 20 threshold looks out of range for some weeks. 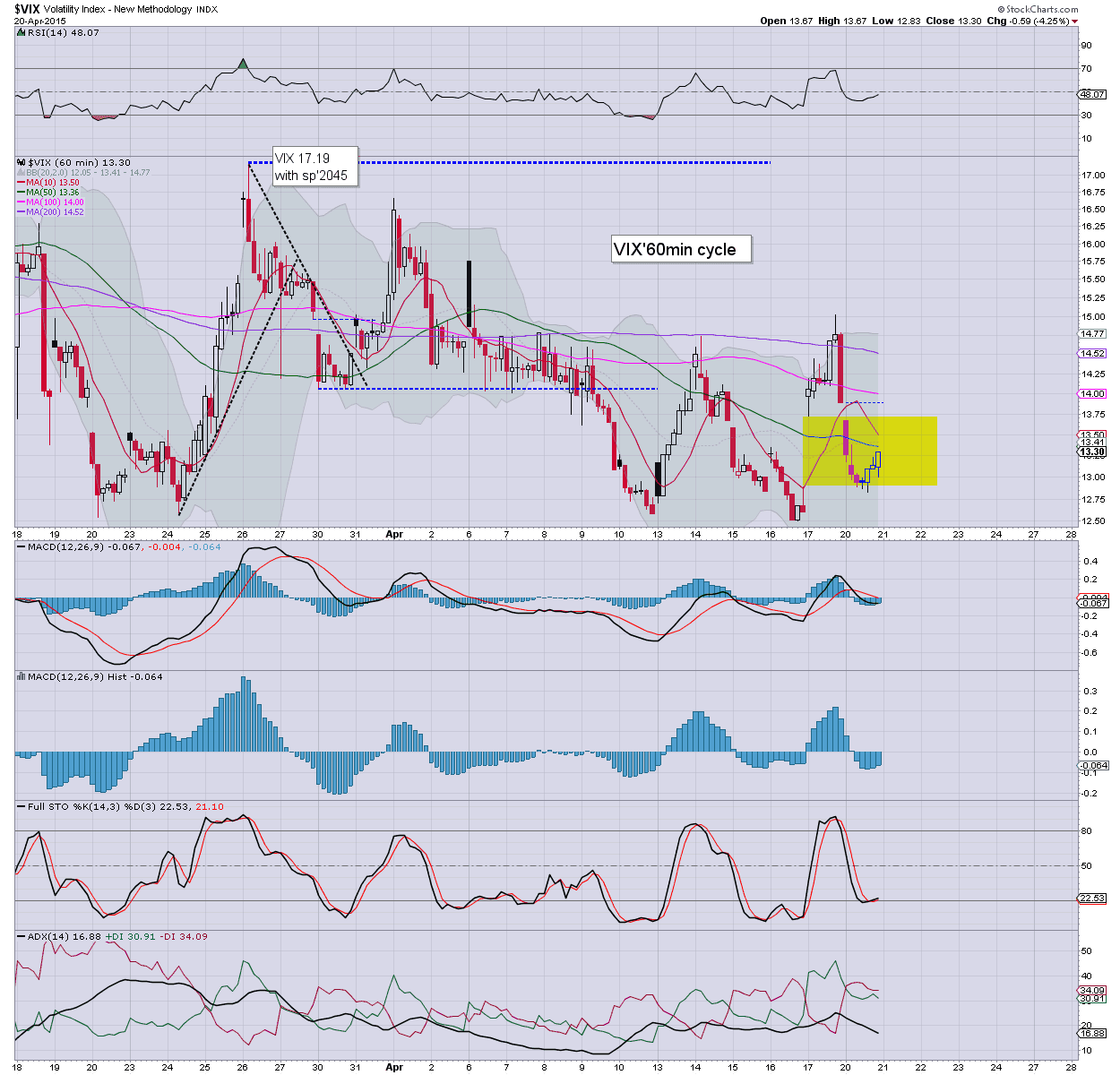 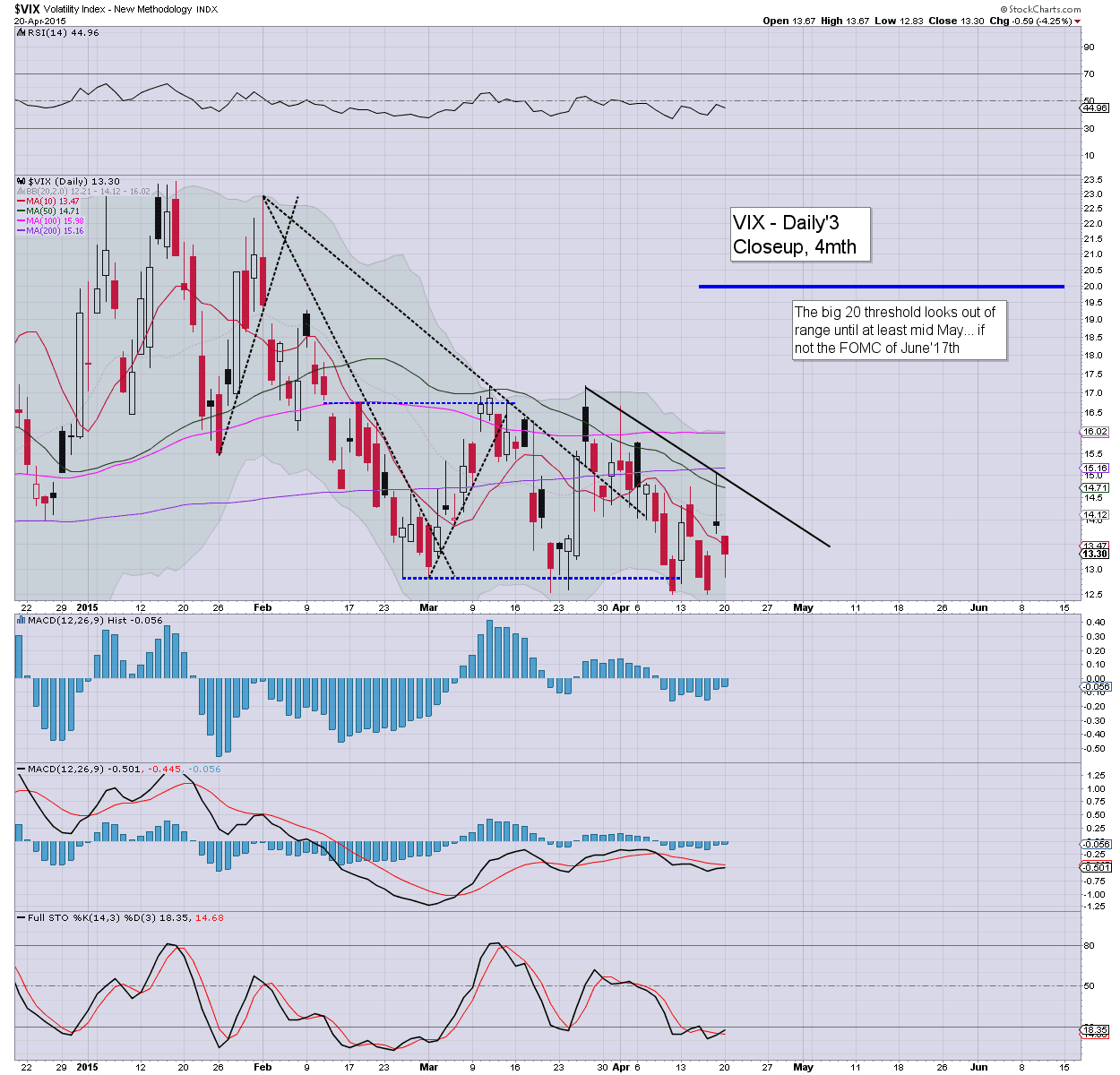 Equities up... VIX cooling... and there is little sign the big 20 threshold will be hit until at least mid May.. if not the FOMC of mid June.
- 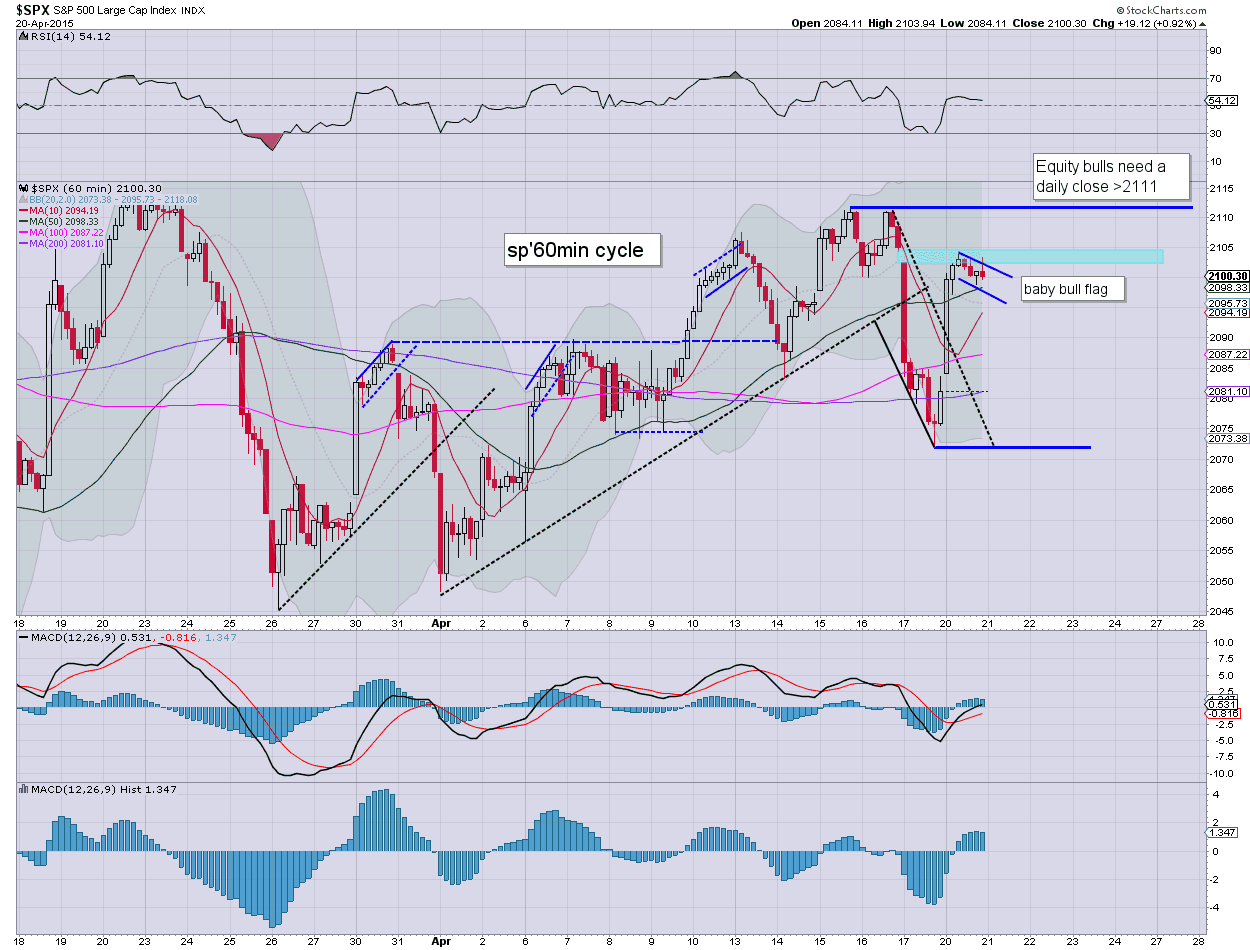 *awaiting IBM earnings due at the close
--

Not much to note on today.

Price structure on the hourly cycle is a baby bull flag, and bodes for further upside tomorrow.

Weekly charts offer 2120/30s.. although that looks unlikely until next week/end month.
-- 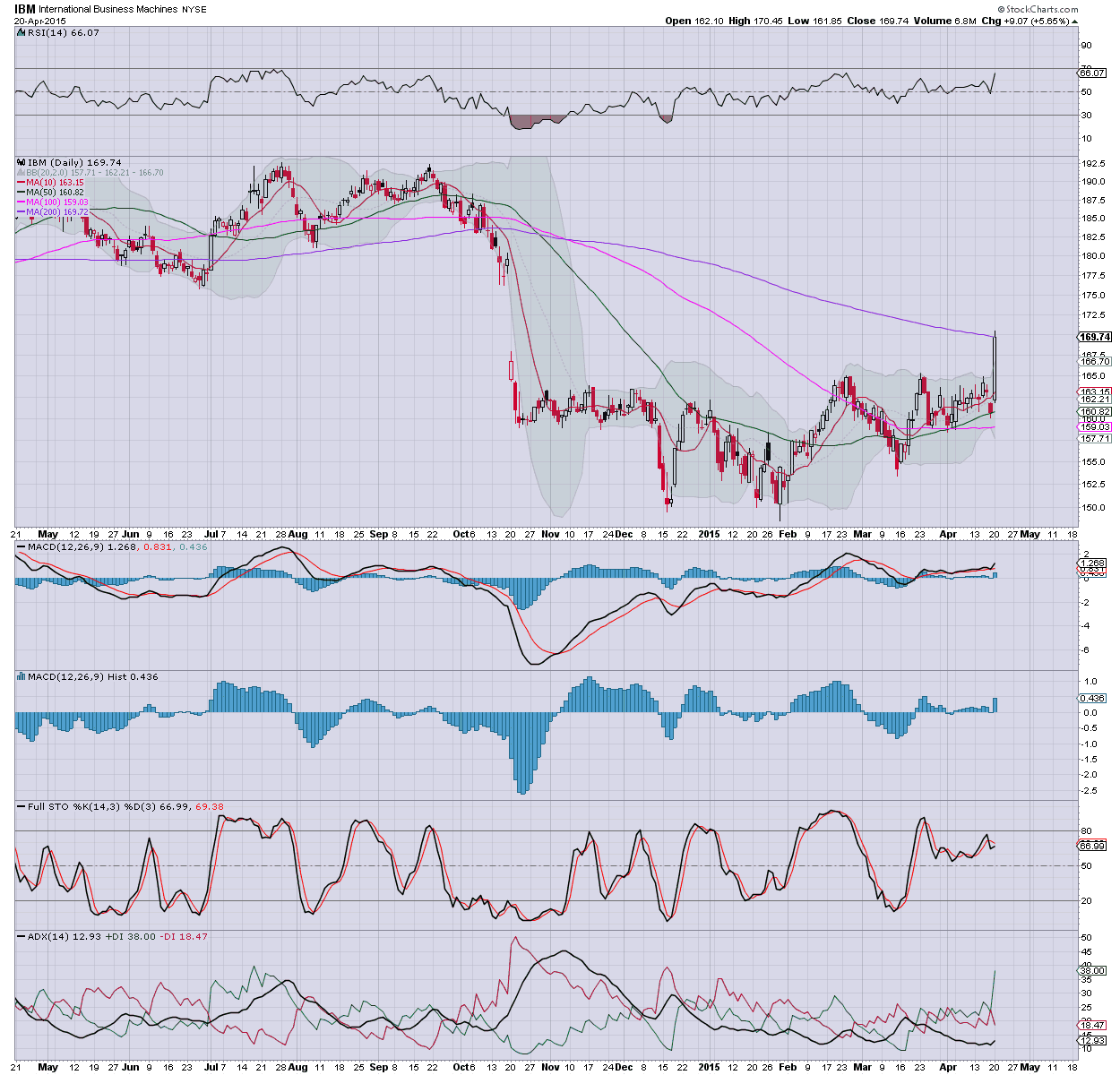 
4.19pm.. IBM cooling from $171 to 166.. but overall, there seems little reason for the stock not to battle upward into May - along with the rest of the market. Clearly though.. there is some sell side vol' at the 200dma.

US equities continue to hold sig' gains, after the borderline bearish hysteria of Friday. Broader trend for US - and most world markets, remains bullish into May. Price structure on the hourly cycle is a baby bull flag.. and bodes for a break over the gap zone of 2102/04... at the Tuesday open. 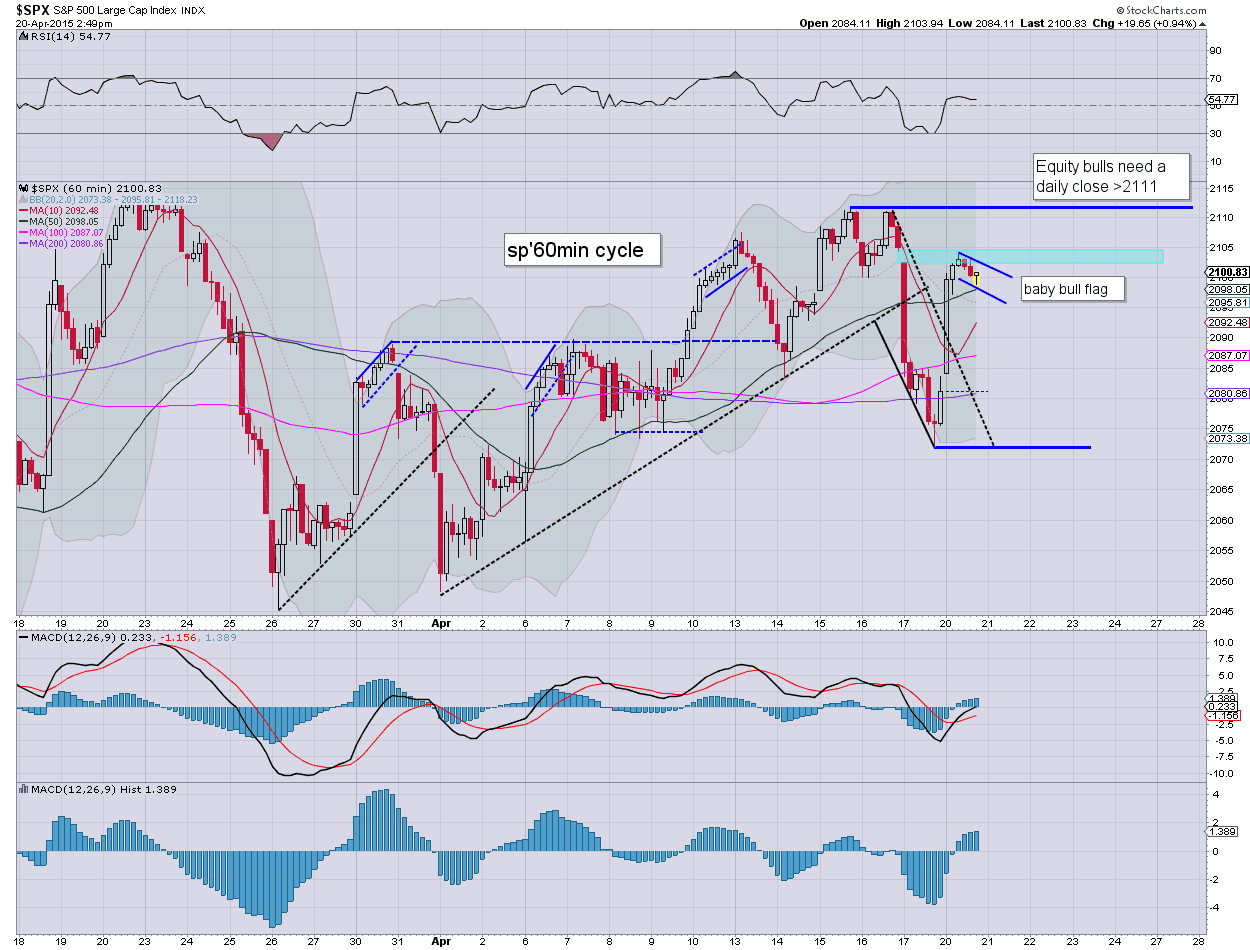 Bulls look set to claw higher across this week, and new historic highs remain well within range, not least on the R2K and NYSE comp' - which both broke new highs last week.

-
*awaiting IBM earnings at the close. 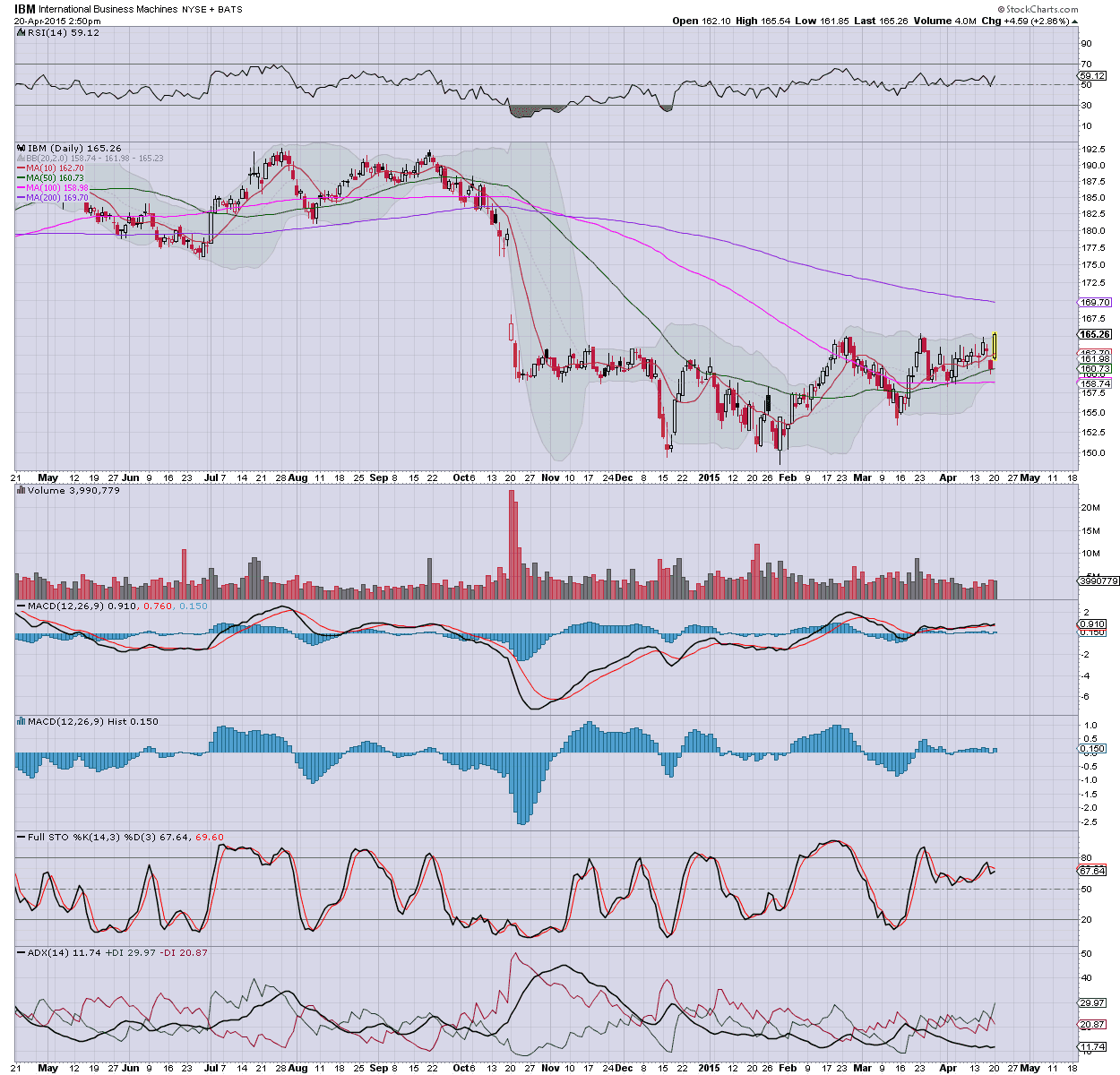 Price structure is offering a break to around $175 tomorrow. That would certainly help give the Dow another kick higher tomorrow.
Posted by Trading Sunset at 19:52:00
Email ThisBlogThis!Share to TwitterShare to FacebookShare to Pinterest

US equities have got stuck at the gap zone of sp'2102/04. Regardless of minor weakness into the close, further upside looks due across the week.. with a key break >2111. Metals remain weak, Gold -$11. Oil is holding moderate gains of 0.4%. 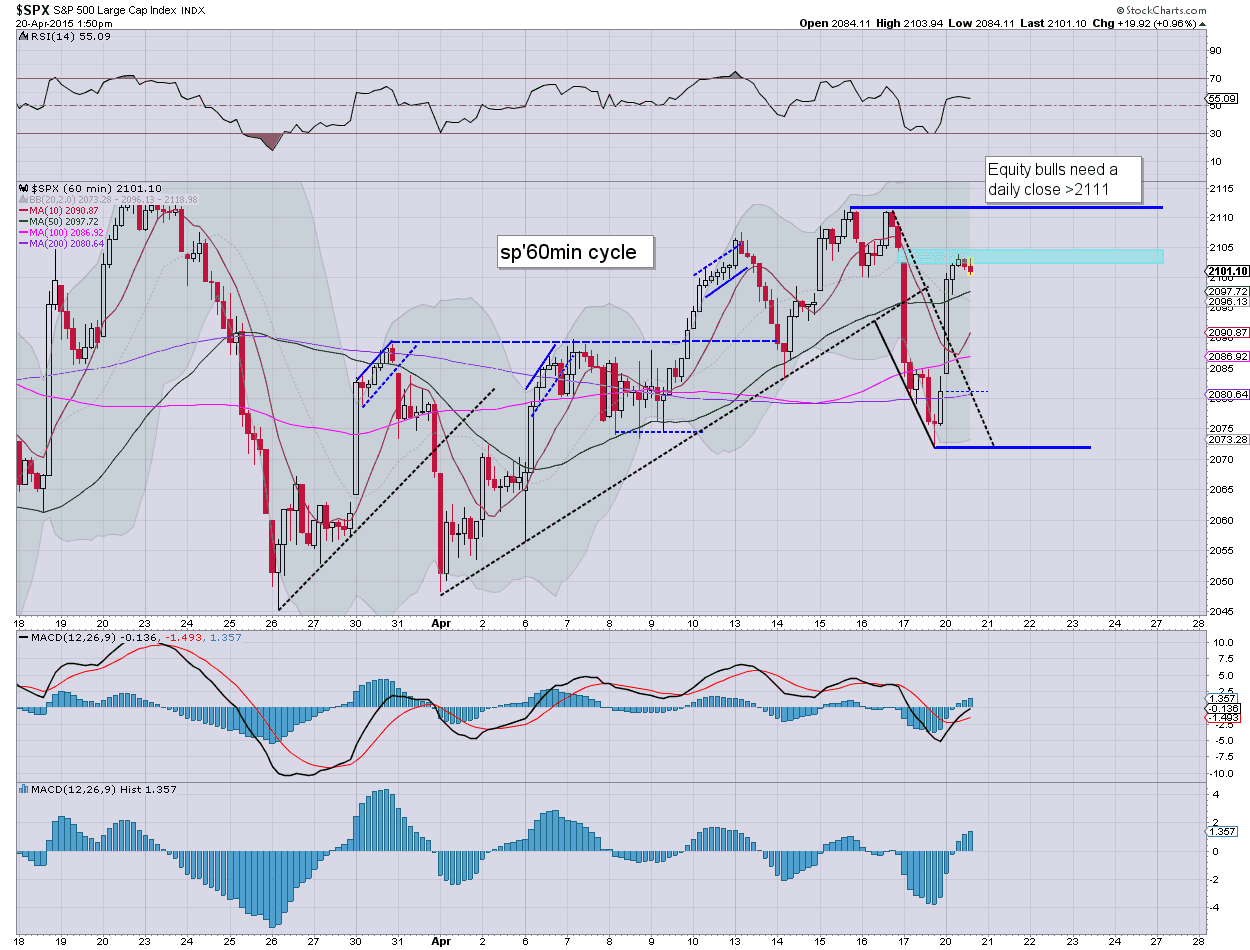 Price structure is a baby bull flag. as better seen on the smaller 5/15min cycle.

A daily close >2105 looks unlikely... but is certainly viable tomorrow.
-- 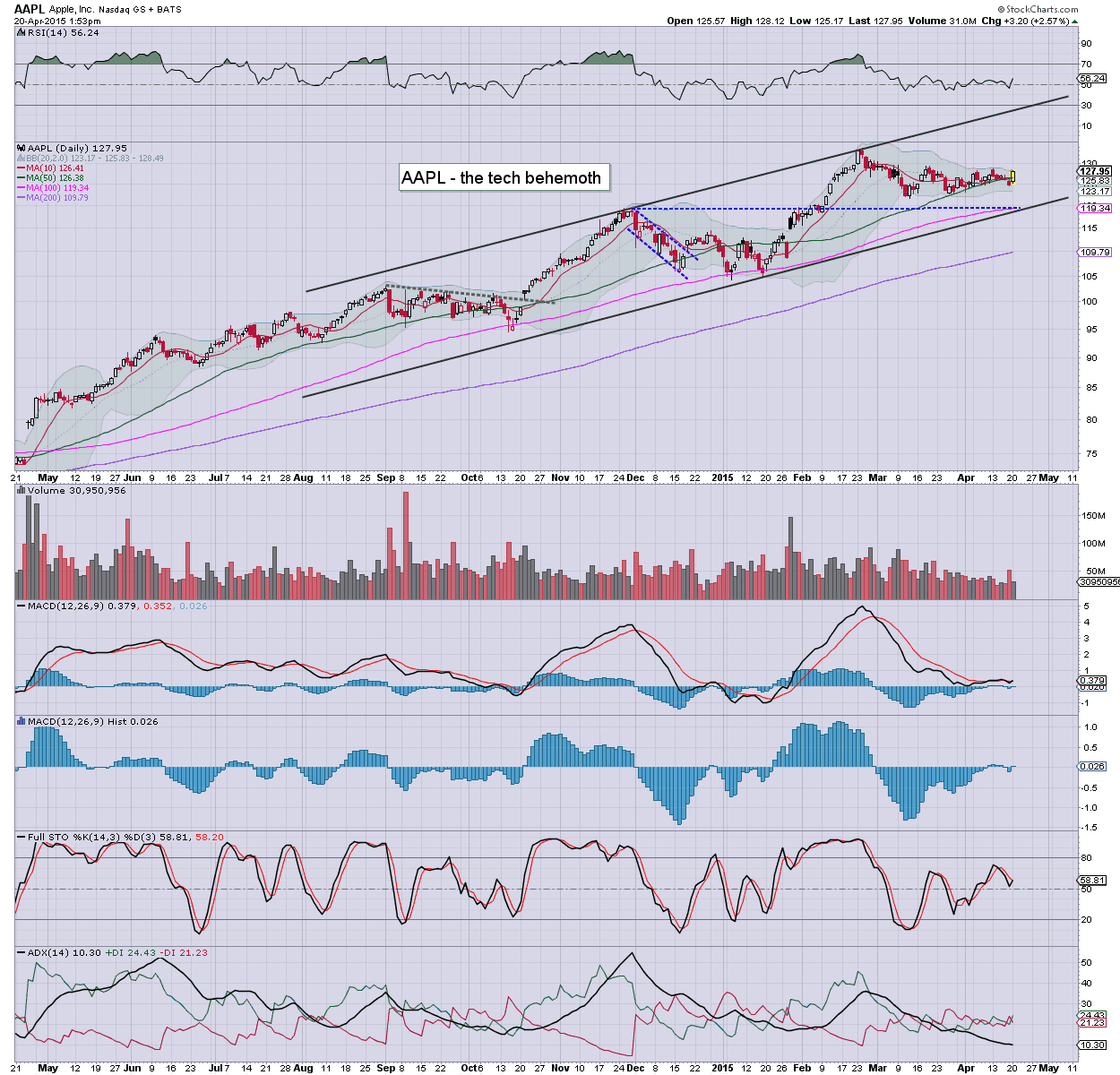 Looking strong in earnings.. next Monday, Apr'27th
Posted by Trading Sunset at 18:54:00
Email ThisBlogThis!Share to TwitterShare to FacebookShare to Pinterest

US equities are holding significant gains, with a daily close in the sp'2095/2005 zone looks probable. Further strength across the week looks due as earnings continue to come in broadly... 'reasonable'. Metals remain weak, Gold -$9. Oil is trying to build moderate gains, +0.4% in the $57s. 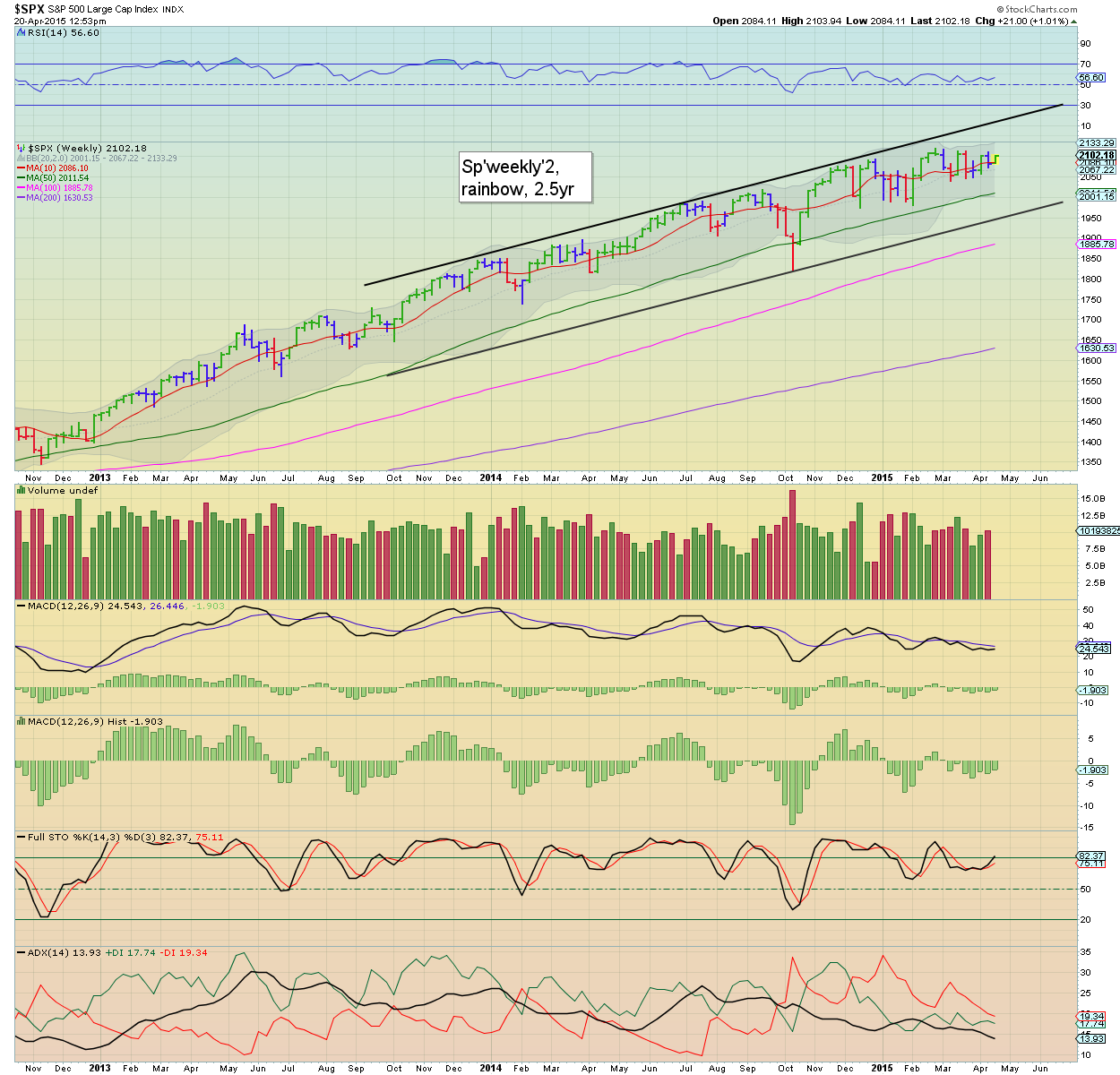 *a brief look at the weekly chart, another green candle.... upper bol is offering the 2130s in the immediate term... although that does not seem likely until next week. 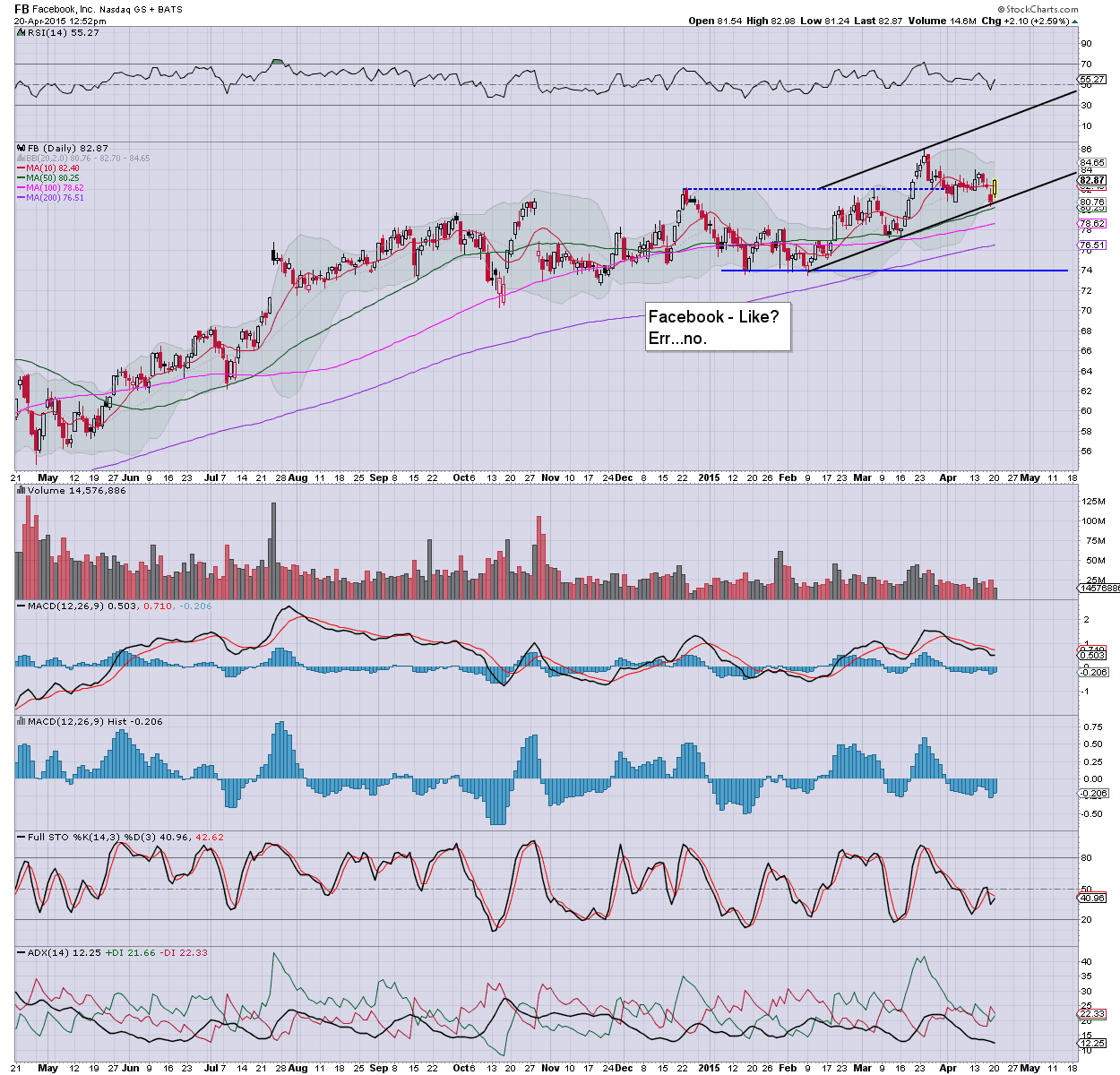 stay tuned
Posted by Trading Sunset at 17:54:00
Email ThisBlogThis!Share to TwitterShare to FacebookShare to Pinterest

US equities are holding significant gains, and equity bears look powerless. A daily close in the sp'2095/2105 zone now looks probable..  with a break above resistance of 2111 viable by this Thurs/Friday. Metals remain weak, Gold -$12, with Silver -2.1%. Oil is seeing some minor chop, +0.1% 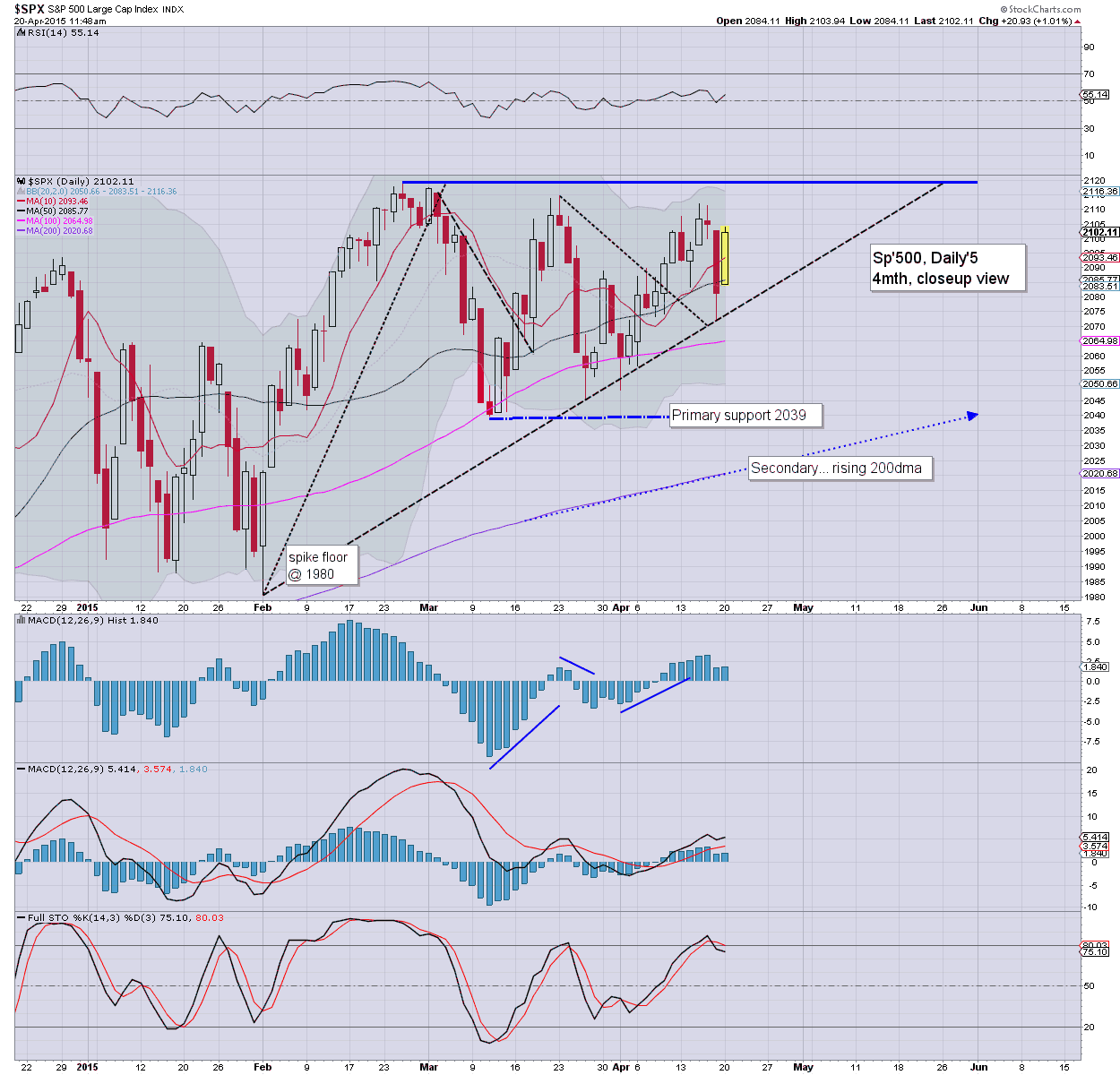 Bears are absent, and we sure ain't going to close net lower today.

I realise some will be calling for a bounce/secondary top in the 2002/11 zone, but really.. market looks set to continue climbing this week... so long as earnings keep on coming in at least 'reasonable'. Eyes on IBM this afternoon. 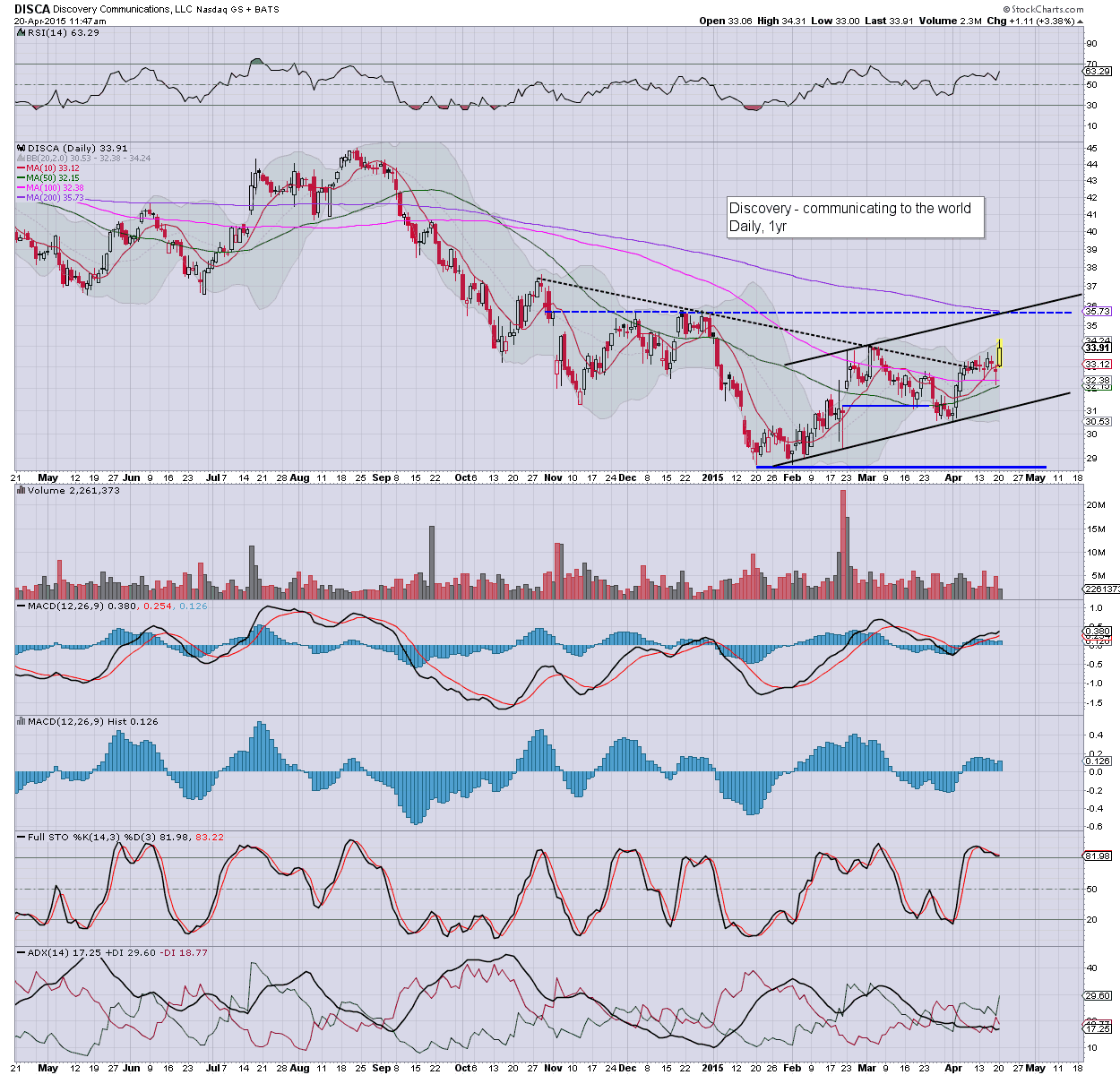 
-
time for tea
Posted by Trading Sunset at 16:49:00
Email ThisBlogThis!Share to TwitterShare to FacebookShare to Pinterest

11am update - Gold bugs in trouble

Whilst equities continue to hold significant gains, there is notable weakness in the precious metals. Gold is -$12, with Silver -2.3%. Price structure is a clear H/S formation, highly suggestive of much lower levels into the summer. Gold @ the giant $1000 threshold looks.. highly probable. 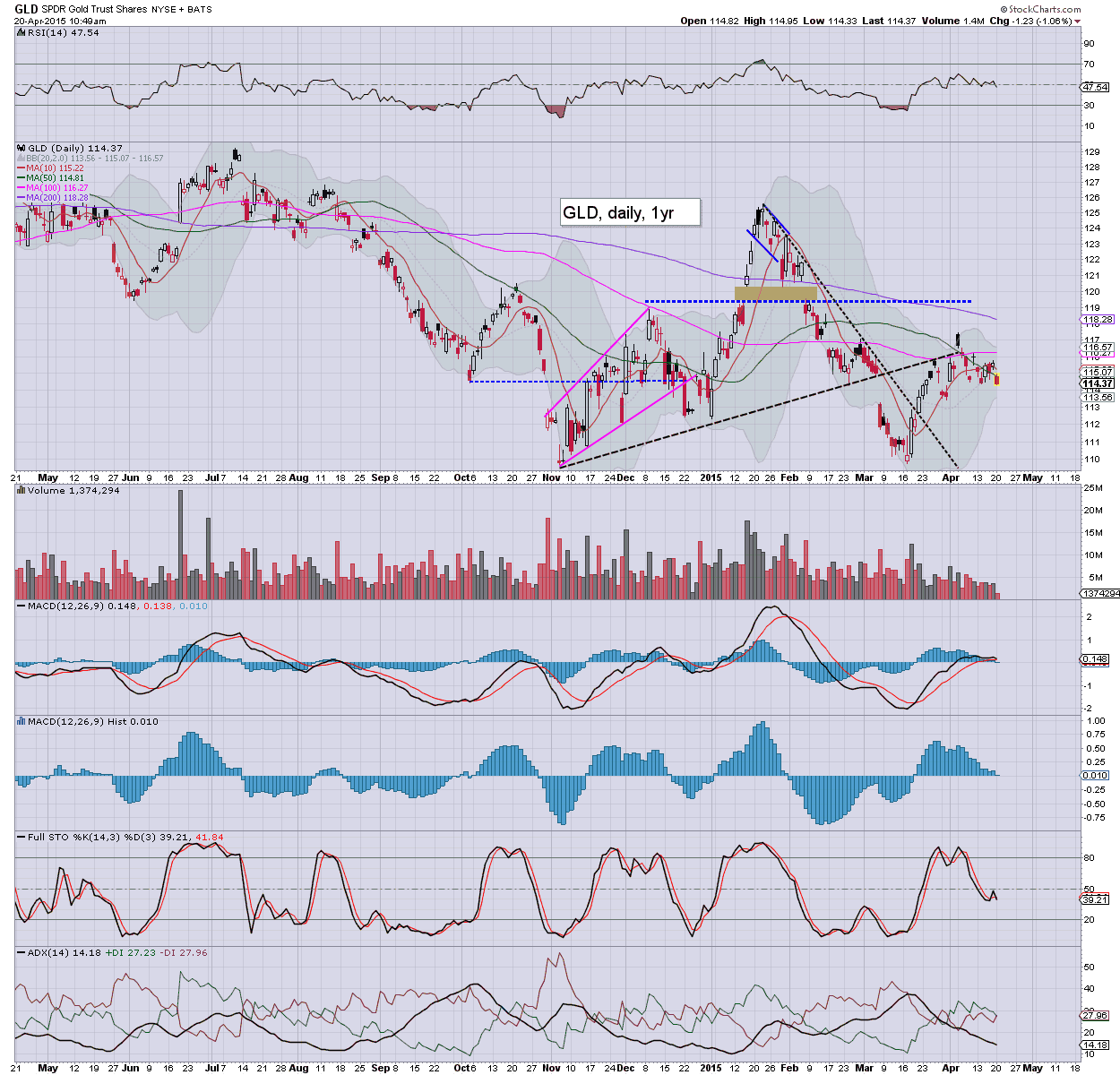 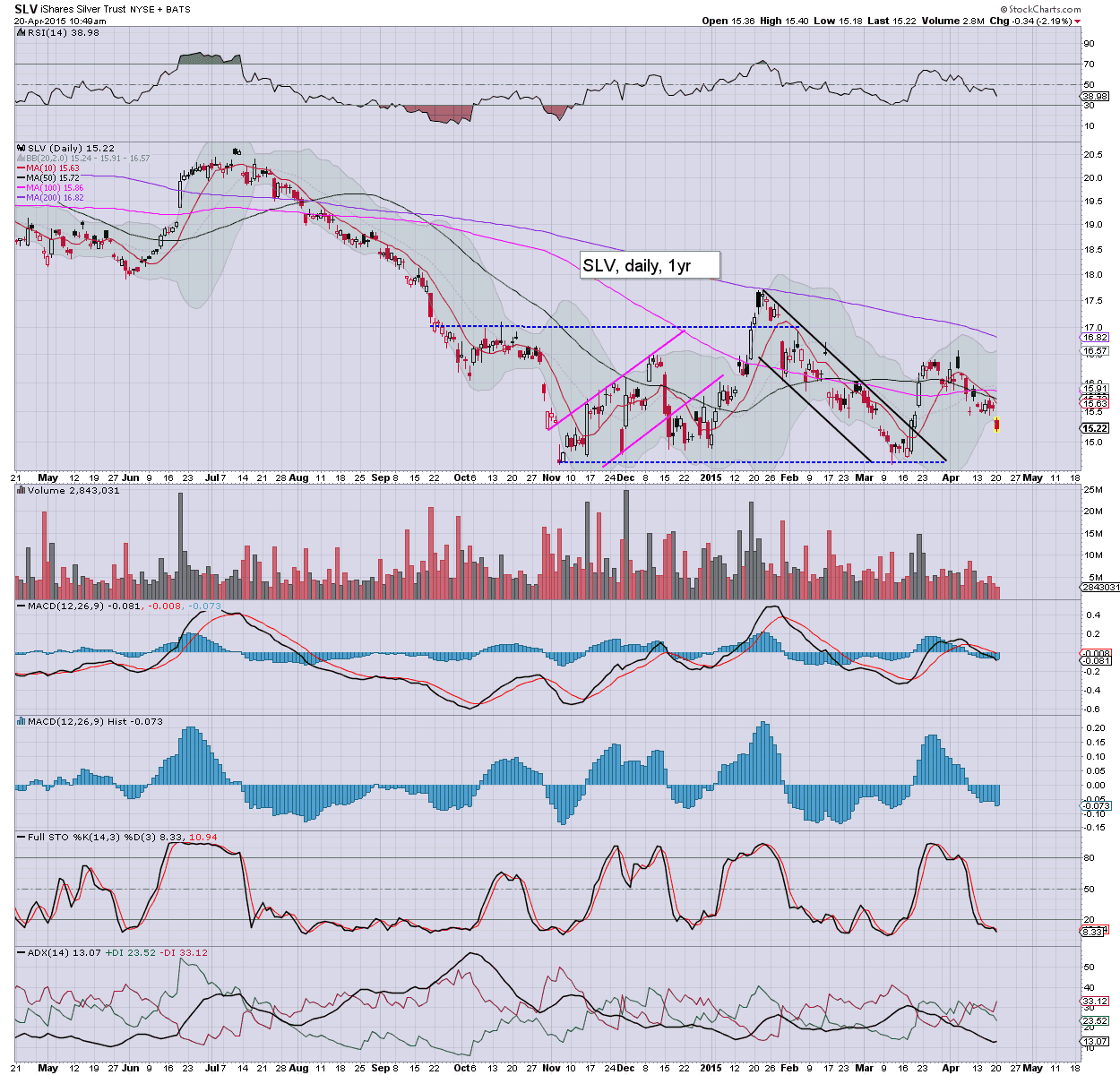 *little to add on equities, hence a little side track to the metals.
--

In theory, if a H/S formation... then should see increasing downside pressure across the next few weeks.

A higher USD would add further pressure... although is not entirely necessary for downside targets to be hit.
-

10am update - starting the week positive

Despite a large amount of bearish weekend chatter, US equities are battling to build significant gains to begin the week. First upside target is the gap zone of sp'2104/02, secondary is resistance of 2111. Metals are weak, Gold -$8. Oil is -0.5%, but as ever.. prone to turning positive. 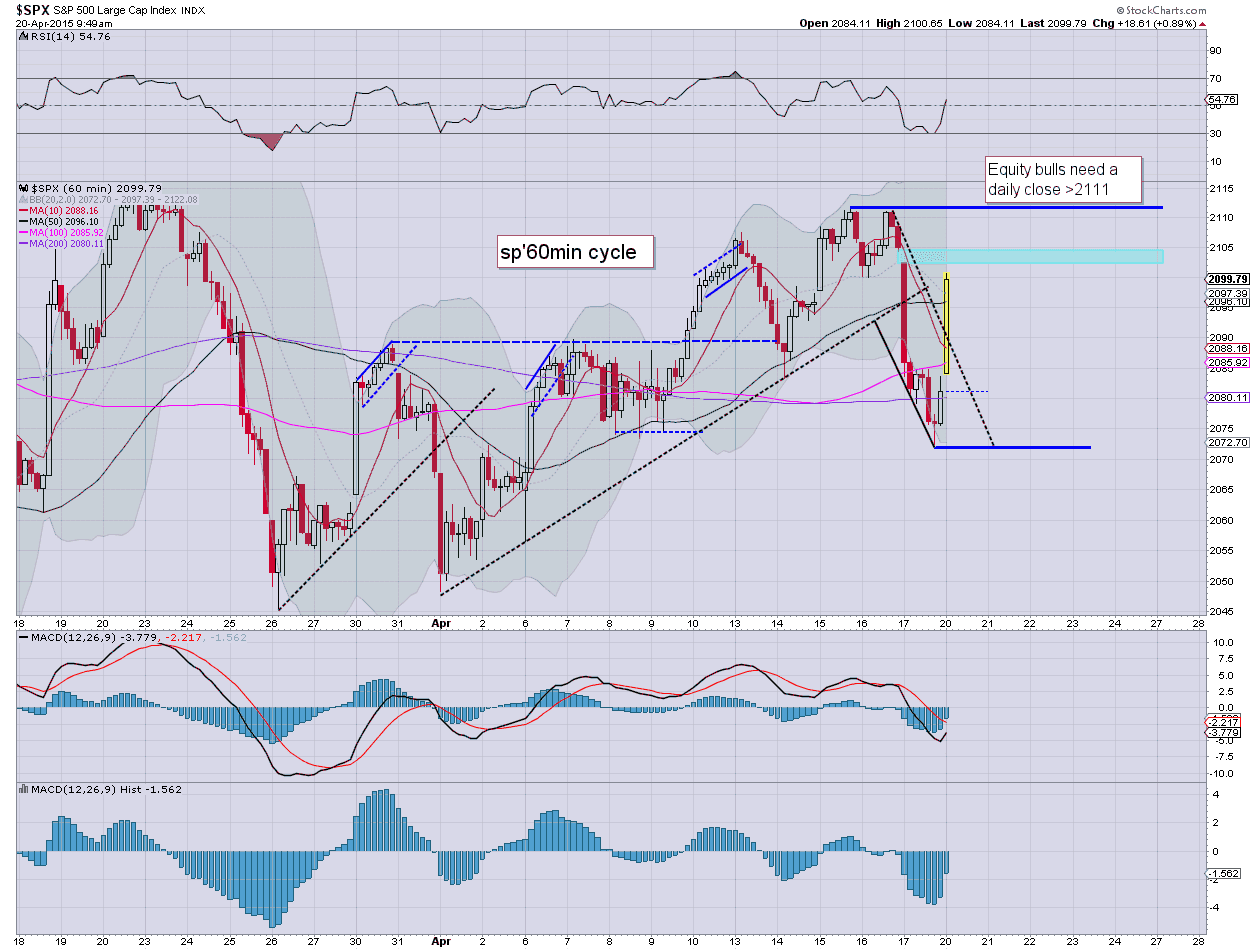 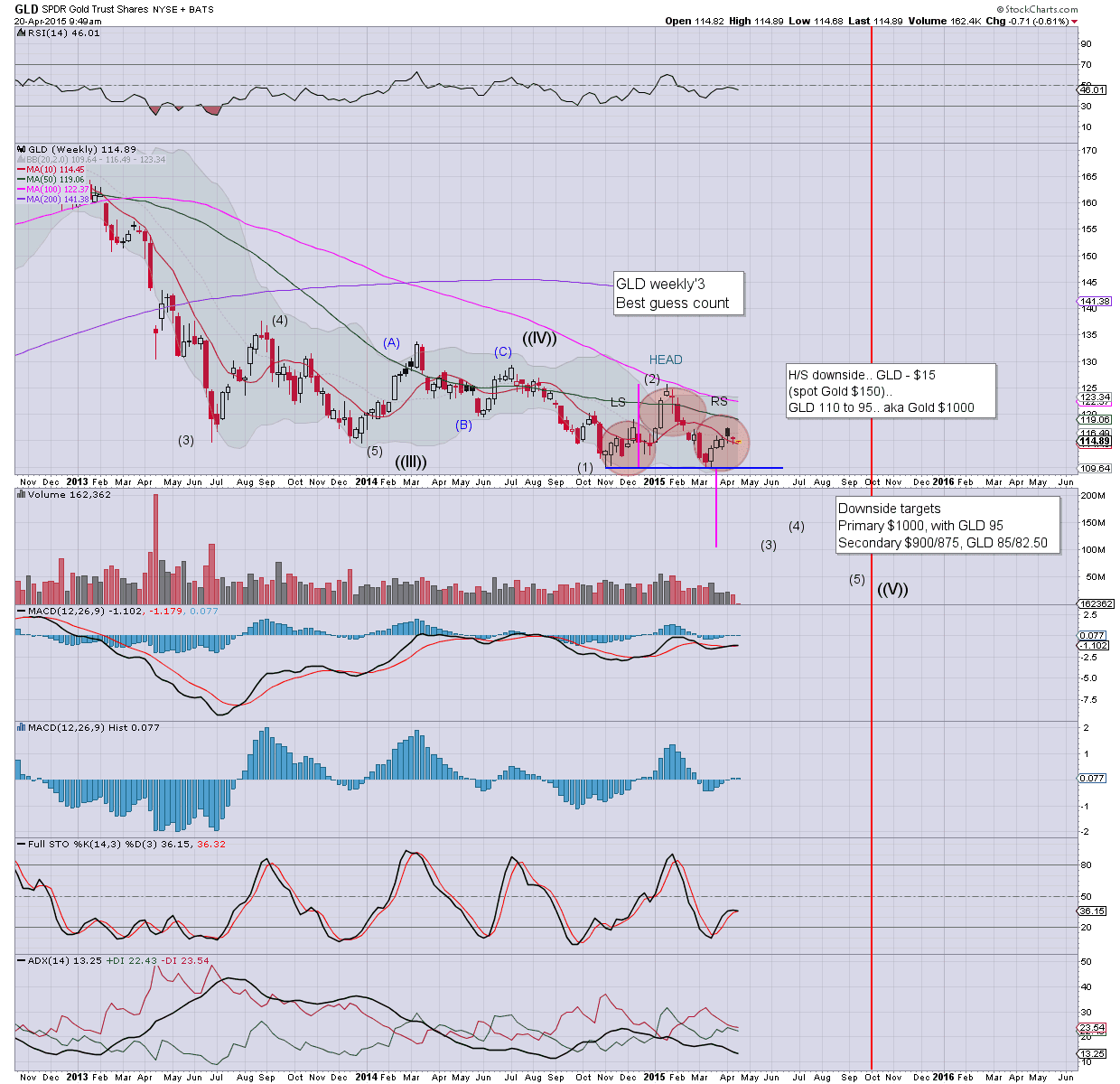 So... all the usual 'omg.. blood bath Monday' talk comes to nothing.

The PBOC put a stop to that.. and China.. along with US markets look set to break new highs.
-

notable strength: IBM +2.4%.. ahead of earnings at the close.


10.01am.. and Oil turns positive (even earlier than I thought viable).

Higher oil... higher energy stocks... will help the broader market into May... if not June.
Posted by Trading Sunset at 14:50:00
Email ThisBlogThis!Share to TwitterShare to FacebookShare to Pinterest

Good morning. Futures are moderately higher, sp +10pts, we're set to open at 2091. Equity bulls should be seeking a daily close >sp'2111 this week. Metals are weak, Gold -$6. Oil is -1.9%, but will certainly be prone to turning positive later today. 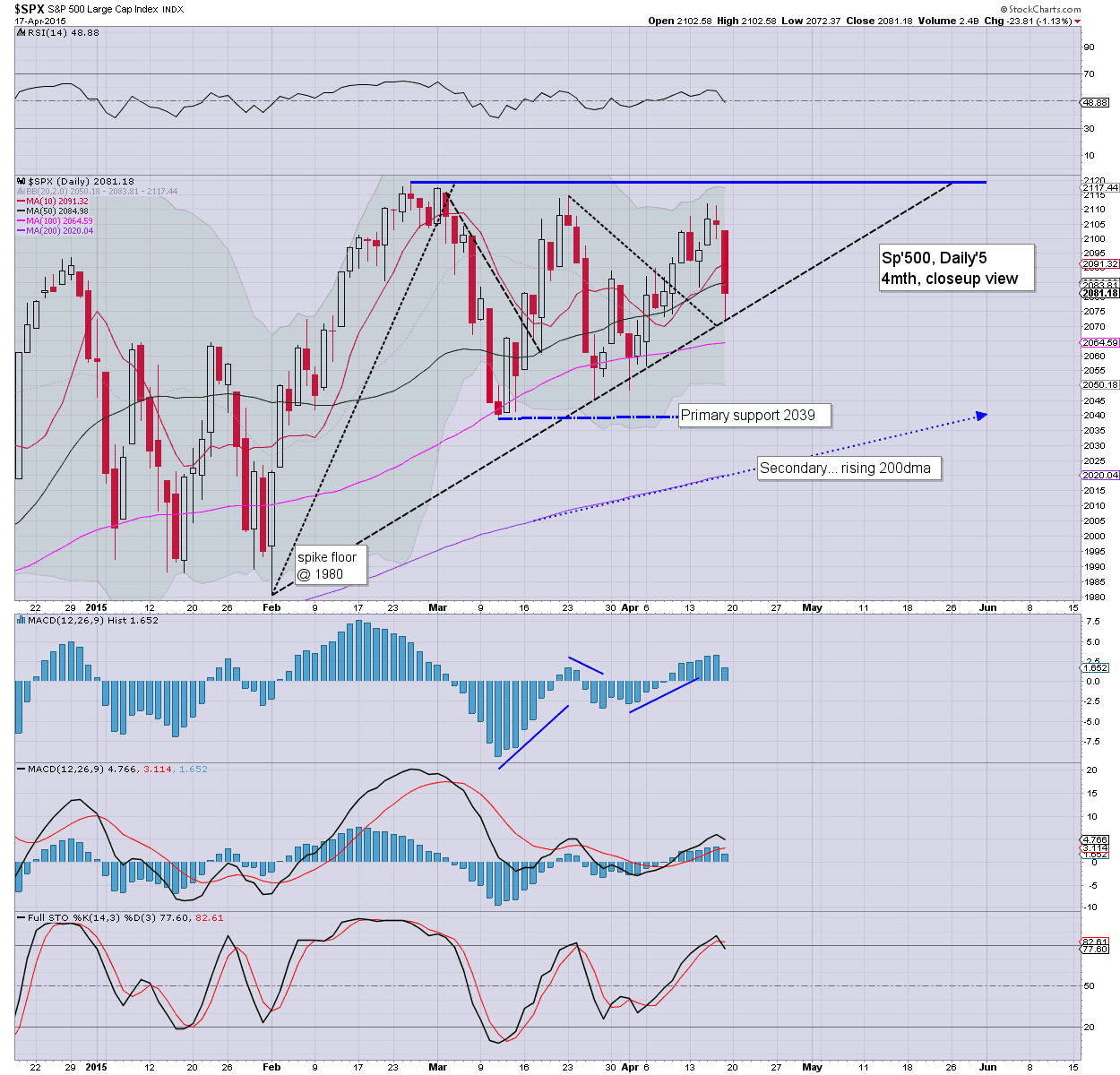 ... and another week at the worlds greatest rigged casino is set to begin.

re: China. The Friday AH futures were offering an opening Monday decline of around -5%. Instead, the Monday close was -1.6% @ 4217. The PBOC (Peoples Bank of China) cut the Bank Reserve Requirement Ratio by 100bps to 18.5%. That surprised many, and is a pretty major injection into the system.. somewhere in the region of $200bn.. and that doesn't take account of any multiplier effect.

So... far from a case of 'Monday doom'... China did fall, but it was nothing particularly significant - at least for China which has sporadic sharp drops.

It would seem there is a fair chance the Shanghai comp' will go to 5K first (or get pretty close).. before the next sig' retrace of 15/20%.

Whilst waiting for Game of Thrones yesterday.. I was in the mood to amuse myself... 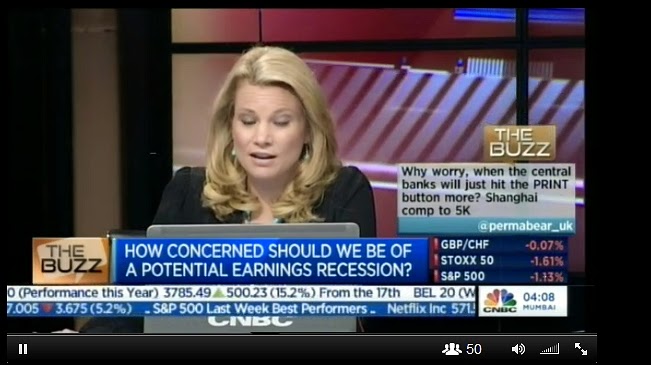 The EU/Asia version of CNBC is very different to the cheer leading US one, and yes, I'll occasionally message them.
-

As for US equities... certainly, the bull maniacs should be desperate to see a net daily gain of at least 0.5%... in the sp'2090s today. If earnings continue to come in reasonable (inc. IBM later today), then we should be able to break above last weeks resistance of 2111. A marginal new historic high in the 2120/30s looks a given.

To me, the only issue is whether we keep climbing to the 2170/80s this summer, before the next opportunity of a sig' down wave.

*for the moment, I can't be short this madness, and am merely playing a few companies across earnings.

--
Update from an especially loud Oscar

No doubt, Dent's deflationary outlook on the precious metals will especially rile up the Gold bugs. As ever... make of that... what you will.
--

Good wishes for the week ahead!
Posted by Trading Sunset at 12:51:00
Email ThisBlogThis!Share to TwitterShare to FacebookShare to Pinterest
Newer Posts Older Posts Home
Subscribe to: Posts (Atom)