Volatility battles into the low teens

With the sp' failing to hold 1830, the market slipped lower into the close, with the VIX managing its first significant gain in some weeks, settling +9.4% @ 13.28. It is particularly notable that the VIX was trading in the 11s in the morning session. 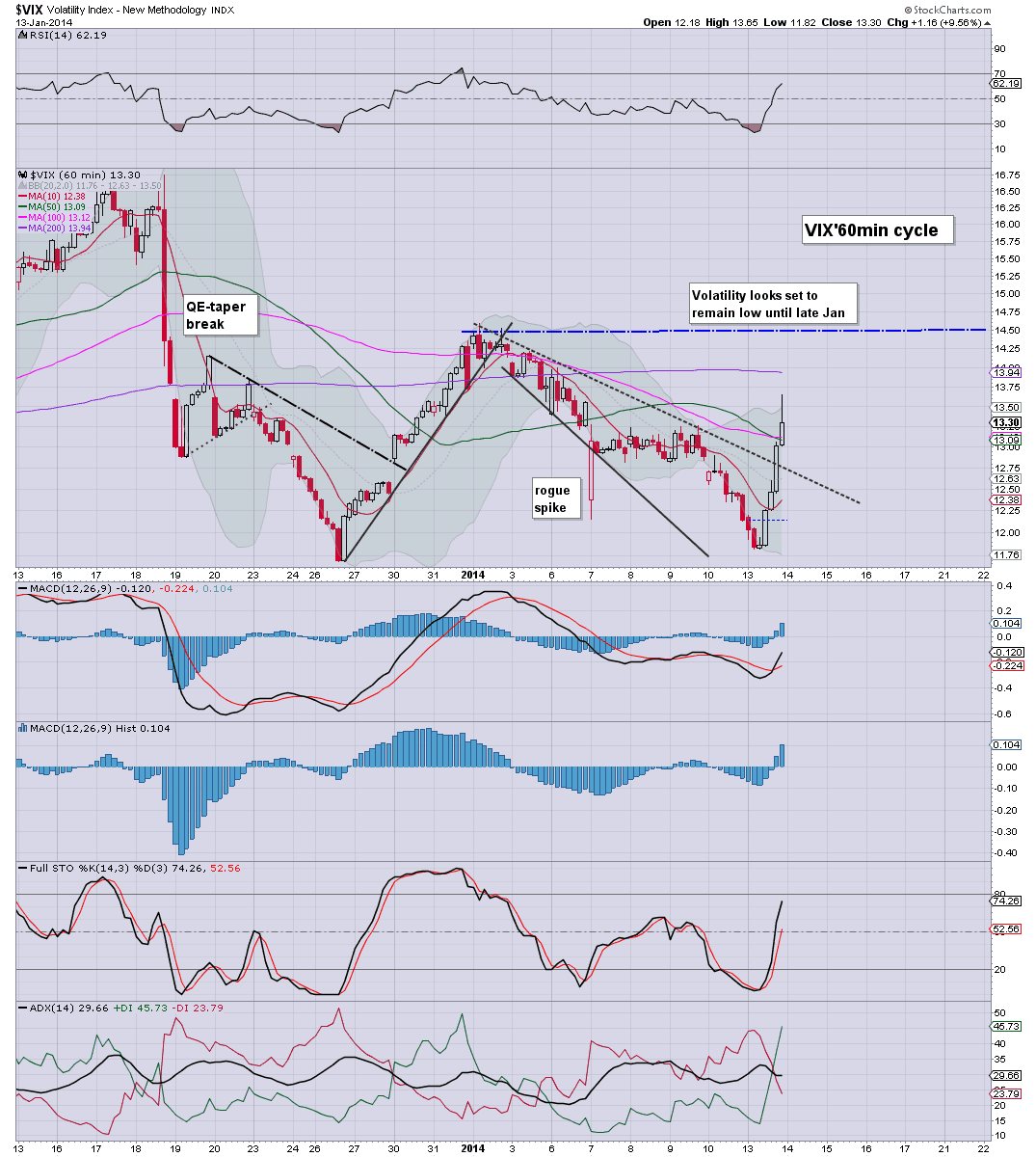 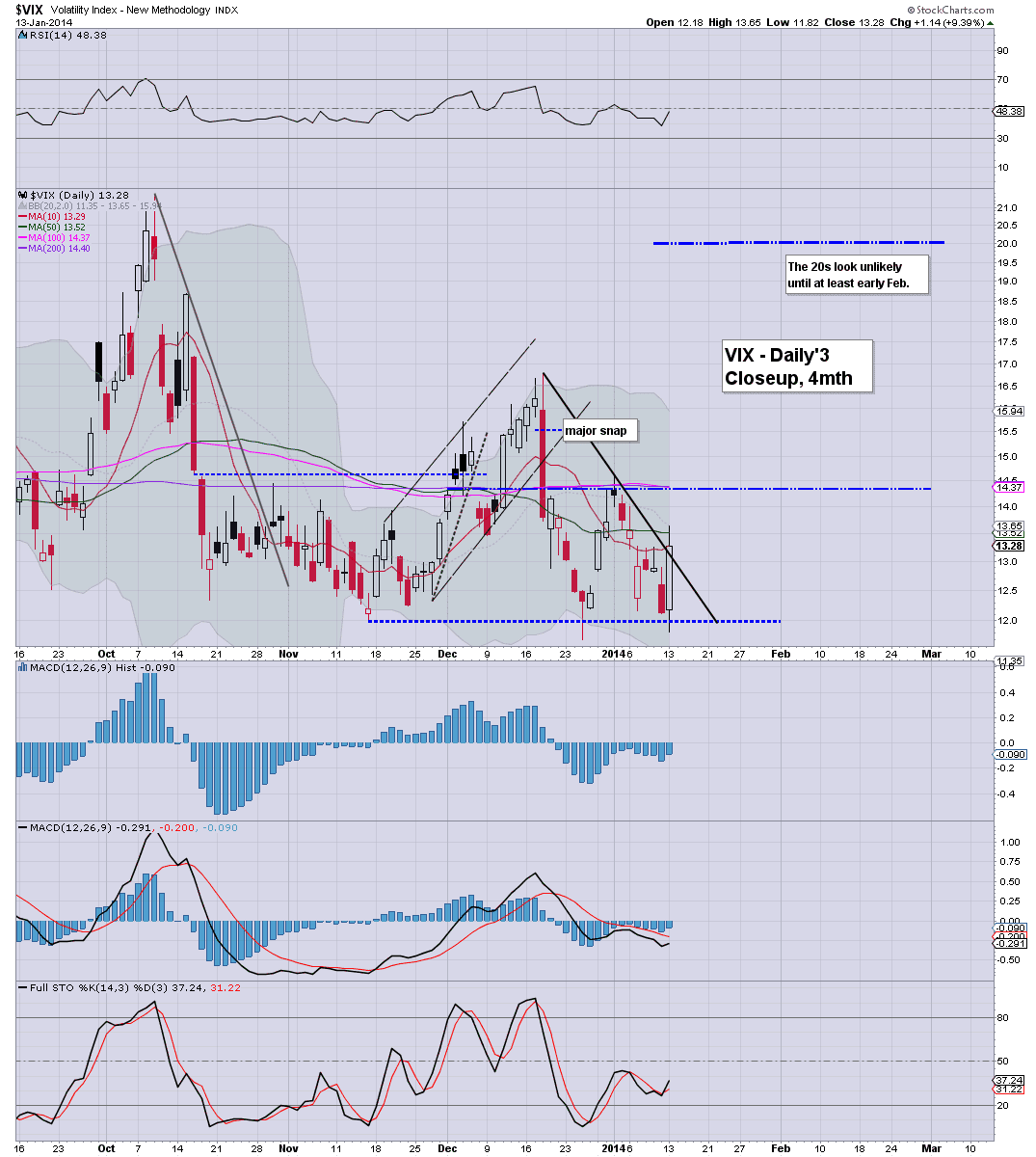 Today sure turned out a lot more dynamic that originally expected. Despite marginally lower indexes in the morning the VIX had broken into the 11s.

--
Baring a break <sp'1810/00, the VIX looks set to remain in the mid/low teens for some weeks..perhaps even the bulk of the spring.

Today's gain was interesting but still...VIX 13s are nothing for the equity bears to get excited about. The 20s do not look viable for some considerable time to come. 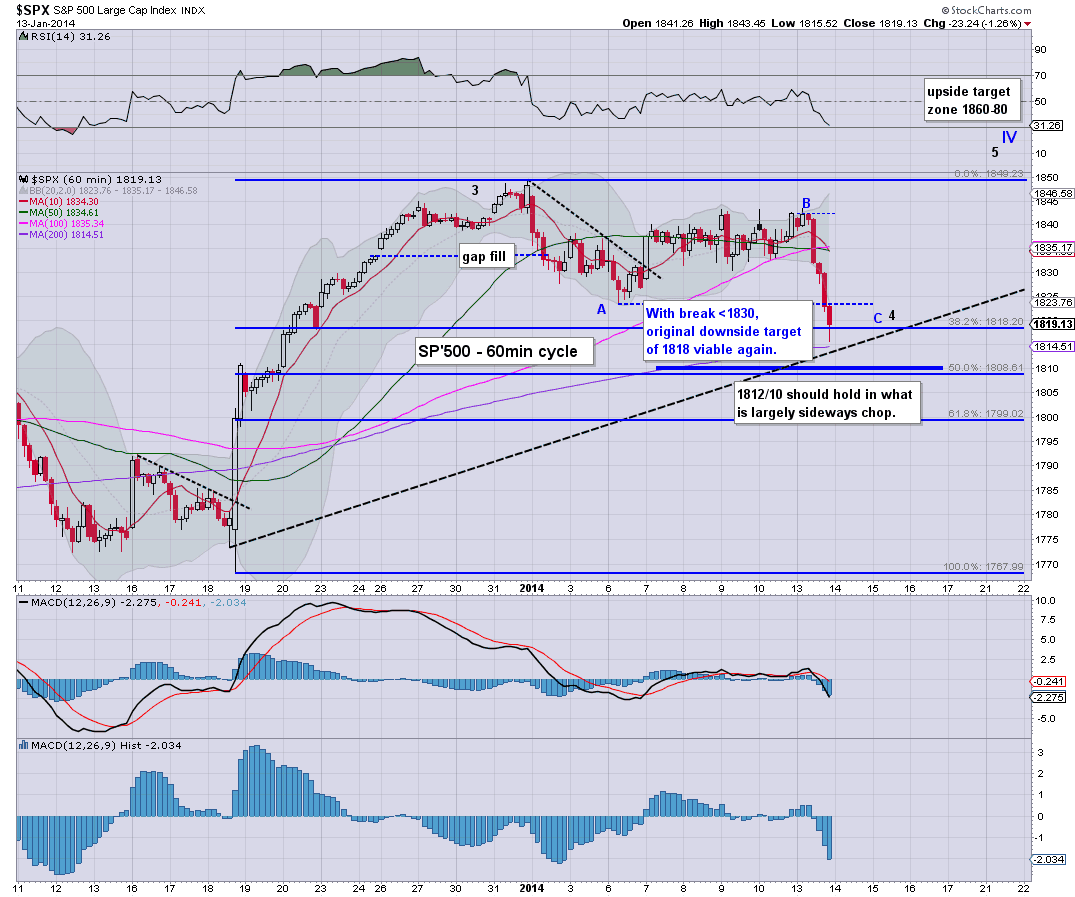 Certainly, the day turned out a lot more interesting than the open had suggested.

Baring a break <sp'1810/00, the primary trend unquestionably remains to the upside.

As I like to say....don't get lost in the bearish hysteria. That hasn't worked out so well in the past few years..and hey...there is HEAVY QE-pomo later this week...bears...beware!
--
more later..on the VIX
Posted by Trading Sunset at 21:01:00
Email ThisBlogThis!Share to TwitterShare to FacebookShare to Pinterest

With the break under sp'1830, we're seeing the weaker bull rats get washed out of their short term positions. Somewhat understandably, a few of the equity bears are still screaming for sub 1800s, although that seems extremely unlikely. VIX is +6%, attempting a daily close in the 13s. 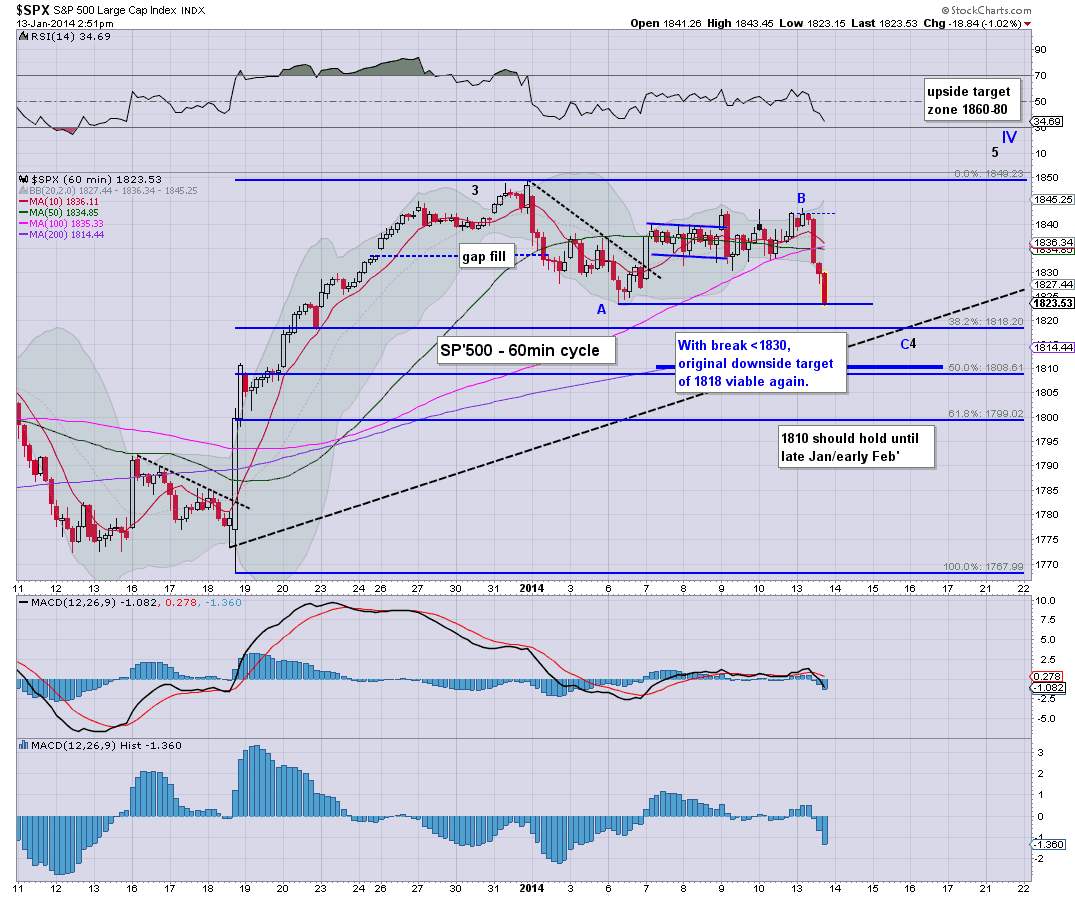 Well, the little down wave has certainly made today a little more interesting.

Things only get real interesting if we put in a daily close under that level, and even then, there are a truck load of technical supports in the 1810/00 zone.

For the bears out there.... The bull rats are really getting a little scare today. No doubt..the crash calling maniacs will be out..guns blazing tonight.

Anyone short..is getting the opportunity to exit, on the first decent down move in some weeks.


3.49pm.. provisional turn in the 5/15min cycles...nothing confirmed yet....but...hell, those on the short side are getting the chance to exit.


3.54pm...looks like we might have a floor... VIX starting to cool a little.
Posted by Trading Sunset at 19:52:00
Email ThisBlogThis!Share to TwitterShare to FacebookShare to Pinterest 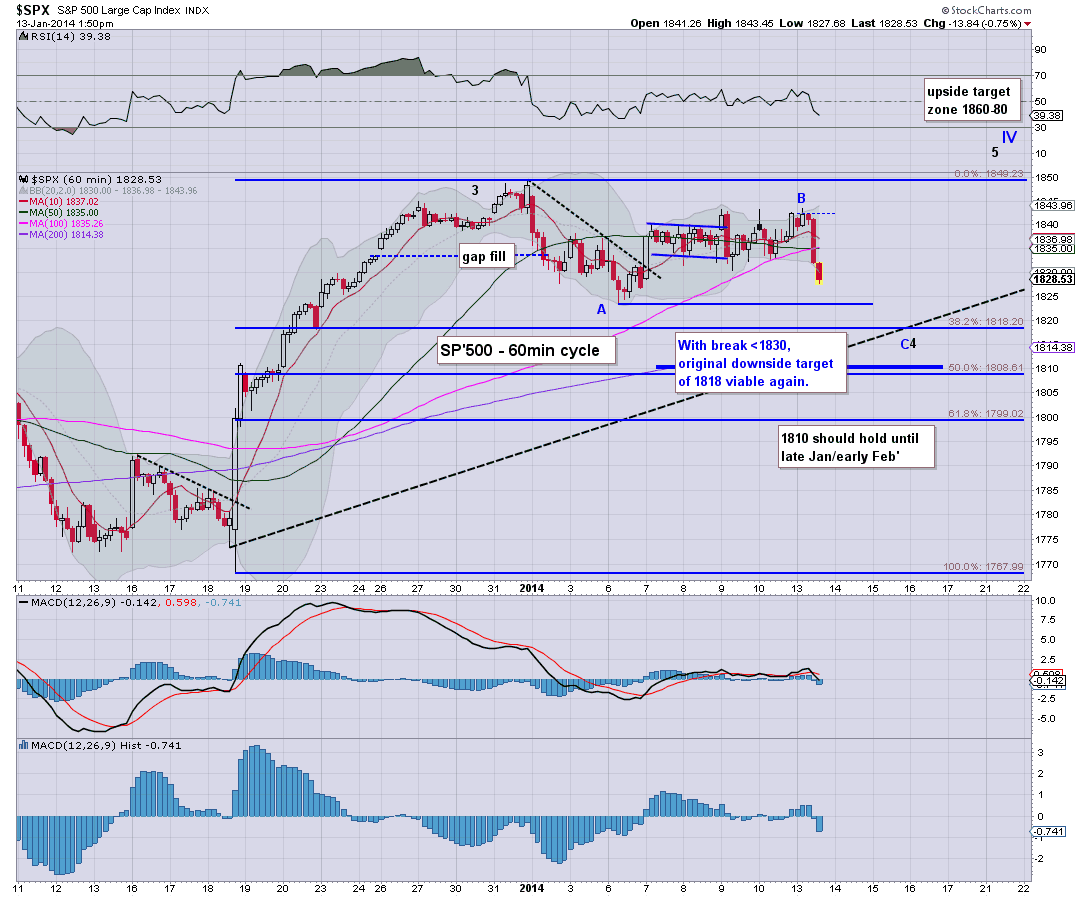 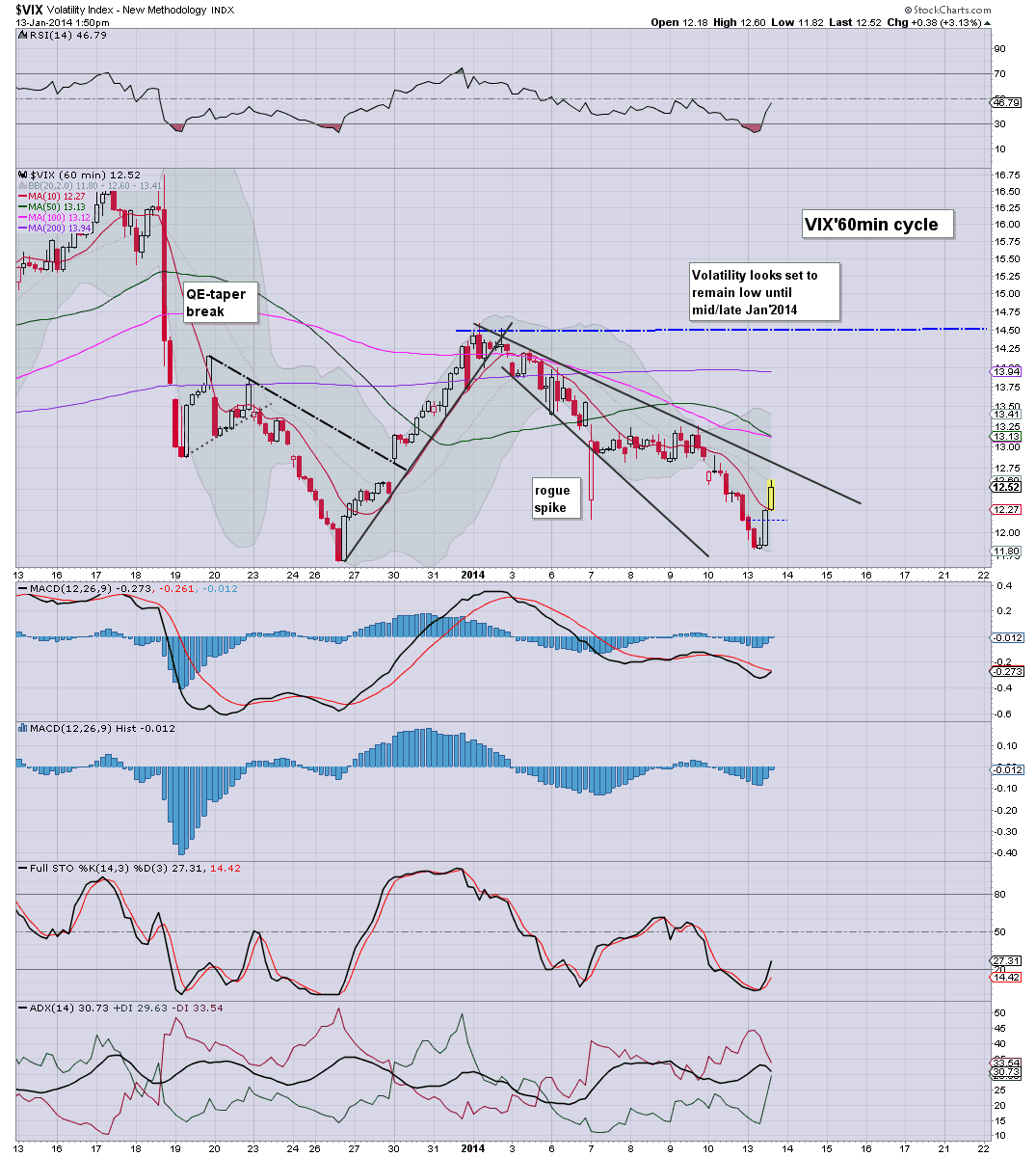 So...Mr market kicked the bears in the opening hour, and now is kicking out the weaker bulls.

Anyone getting overly excited about the index declines of -0.9% needs to go stare at a weekly/monthly chart for the rest of the day.

What will be really telling is where we are at the Wednesday close..after the weeks biggest tranche of Benny/Janet Bux.

Despite the weakness, NFLX and TWTR both holding reasonable gains.


2.33pm... 7pts to go...to hit 1818..although it seems more likely tomorrow..than today.
Posted by Trading Sunset at 18:51:00
Email ThisBlogThis!Share to TwitterShare to FacebookShare to Pinterest

The sp' remains stuck within a very tight trading range of 1843/30. It is notable that despite the minor index weakness...the VIX remains fractionally red. Metals are a touch higher, Gold +$4, whilst Oil remains especially weak, -0.7%. 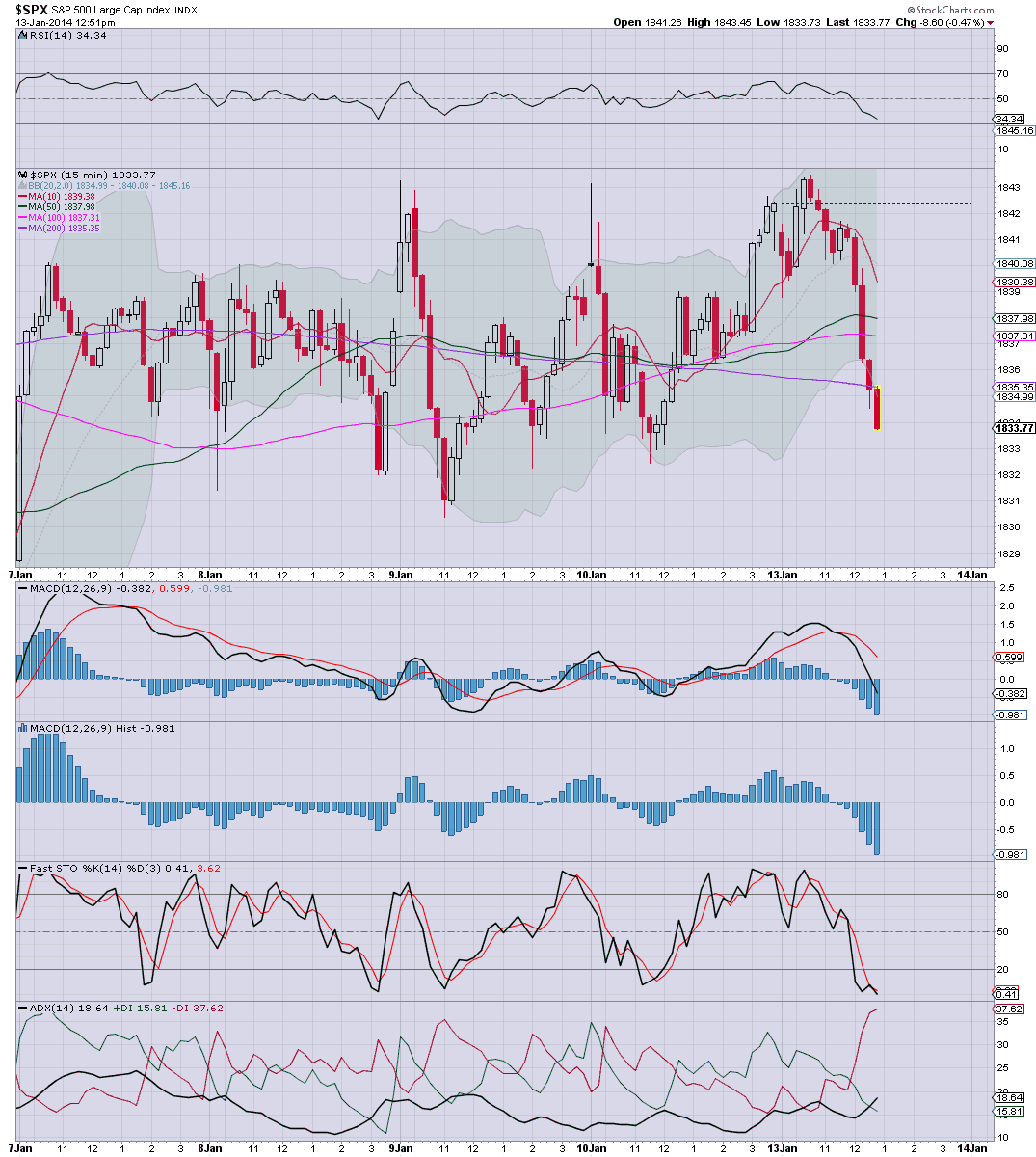 The last 5 trading days - seen on the tiny 15min cycle, show just how stuck we are .

Yet..this is probably the best the bears can do. A break <1830 looks highly unlikely, and becomes less likely the longer we remain above 1830. 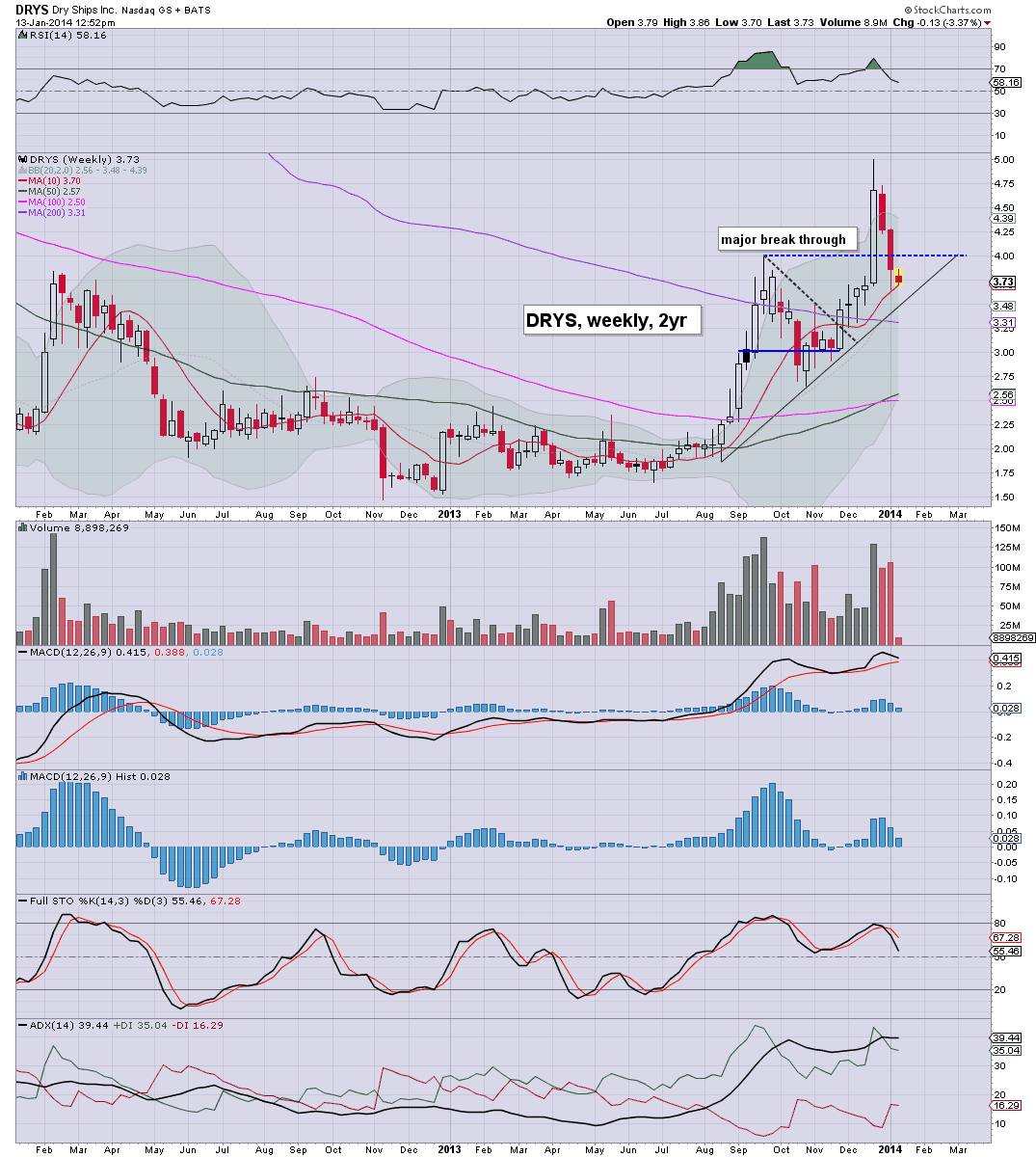 Seen on the bigger weekly cycle, DRYS is now -25% since the brief break into the low 5s. Still, if the BDI can break back higher into the spring, DRYS will probably have doubled from current levels.

Well, that is what some are still yelling. Recent price action is still very broadly bullish though.  The real laughable aspect is that we're barely 1% from the historic highs. 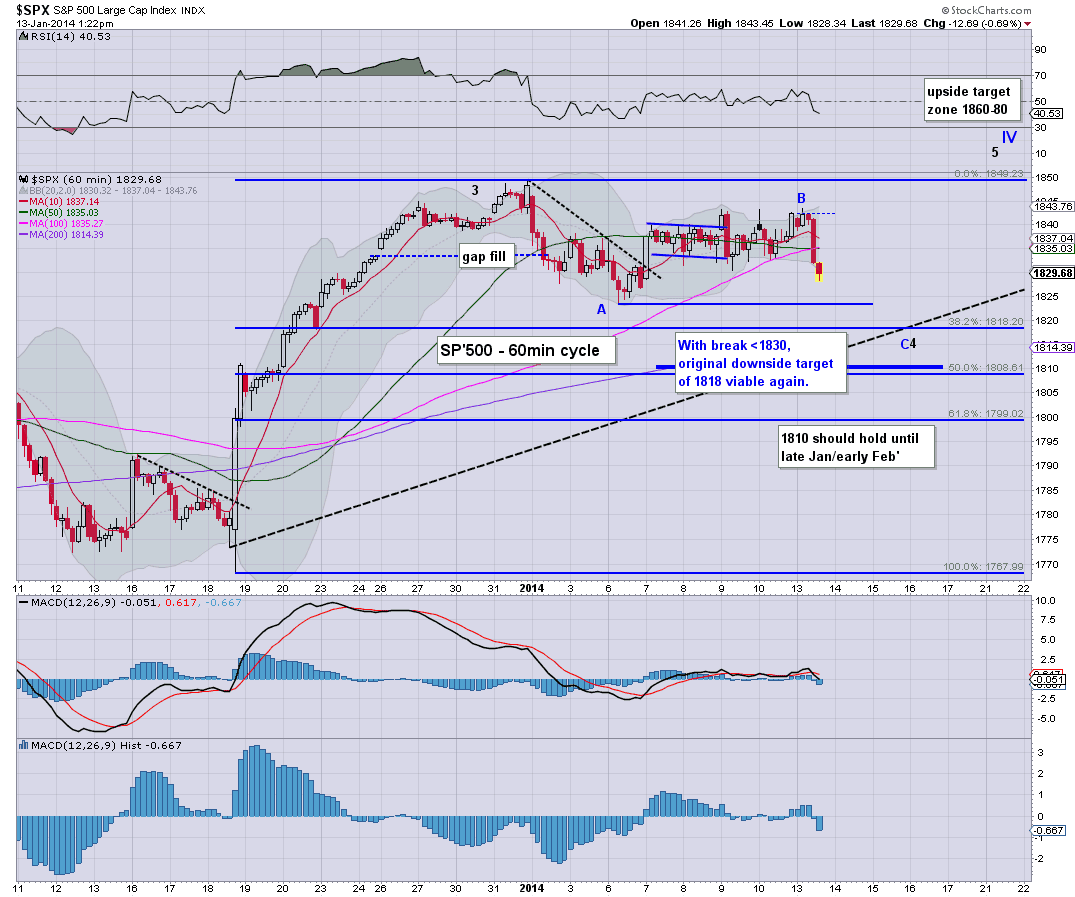 Yes, its changed..and the old 1818 target is back. Even if that is hit though, it does nothing to dent the primary up trend.
Posted by Trading Sunset at 17:53:00
Email ThisBlogThis!Share to TwitterShare to FacebookShare to Pinterest

A fifth day of minor weak chop for the US equity indexes. The VIX is arguably telling the tale though, having already broken into the 11s. It remains a fearless market, with continued QE, how are the bears going to stop the sp'1900s from coming?

So..a touch of weakness in the indexes...yet the VIX has now slipped into the 11s.

My target zone for late spring remains sp'1950/2050. Would that equate to VIX in the 10s..or even single digits before the current multi-month cycle is done?

One thing is for sure, there seems ZERO point in being long VIX for another 2-3 months at least.
- 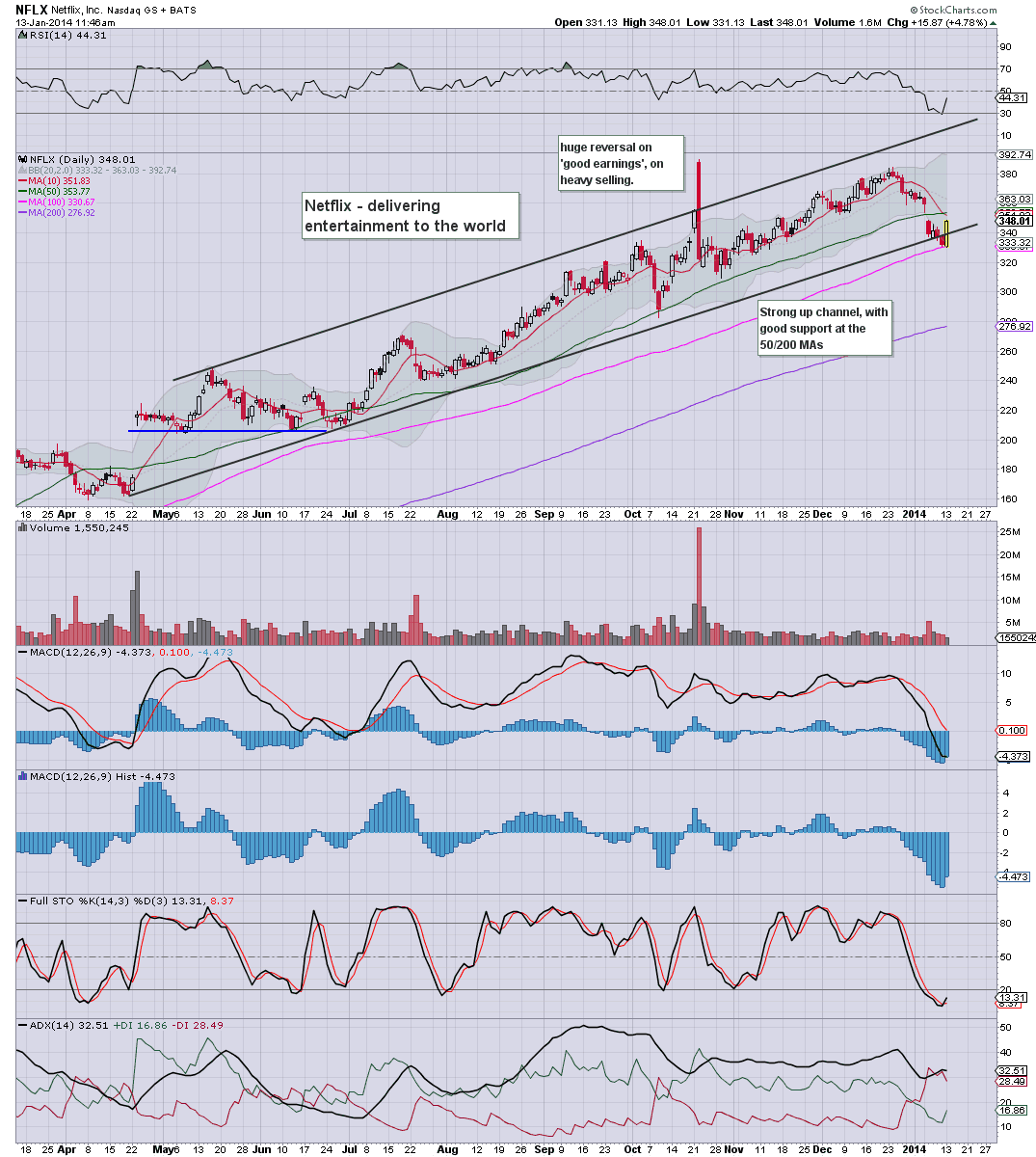 I'm not sure what to make of NFLX. It has a pretty clear channel break, but todays action is pretty bullish. Just needs to clear the daily 10MA of 351 - where the 50 day MA is also lurking. Without question though, Q4 earnings should be okay. At least unlike AMZN, it makes a profit..if small.


12.29pm..another micro down wave...sp'1836.. bulls still have a comfortable 6pts of buffer zone. Nothing has changed since last Tuesday. Algo-bots just playing stop-run games?
Posted by Trading Sunset at 16:51:00
Email ThisBlogThis!Share to TwitterShare to FacebookShare to Pinterest

11am update - bull flags all over the place

Whilst the indexes have turned slightly positive - but still in general chop mode, the daily charts are offering pretty clear bull flags into late Jan/early Feb. It remains highly improbable that we'll be breaking back under sp'1800 any time soon. 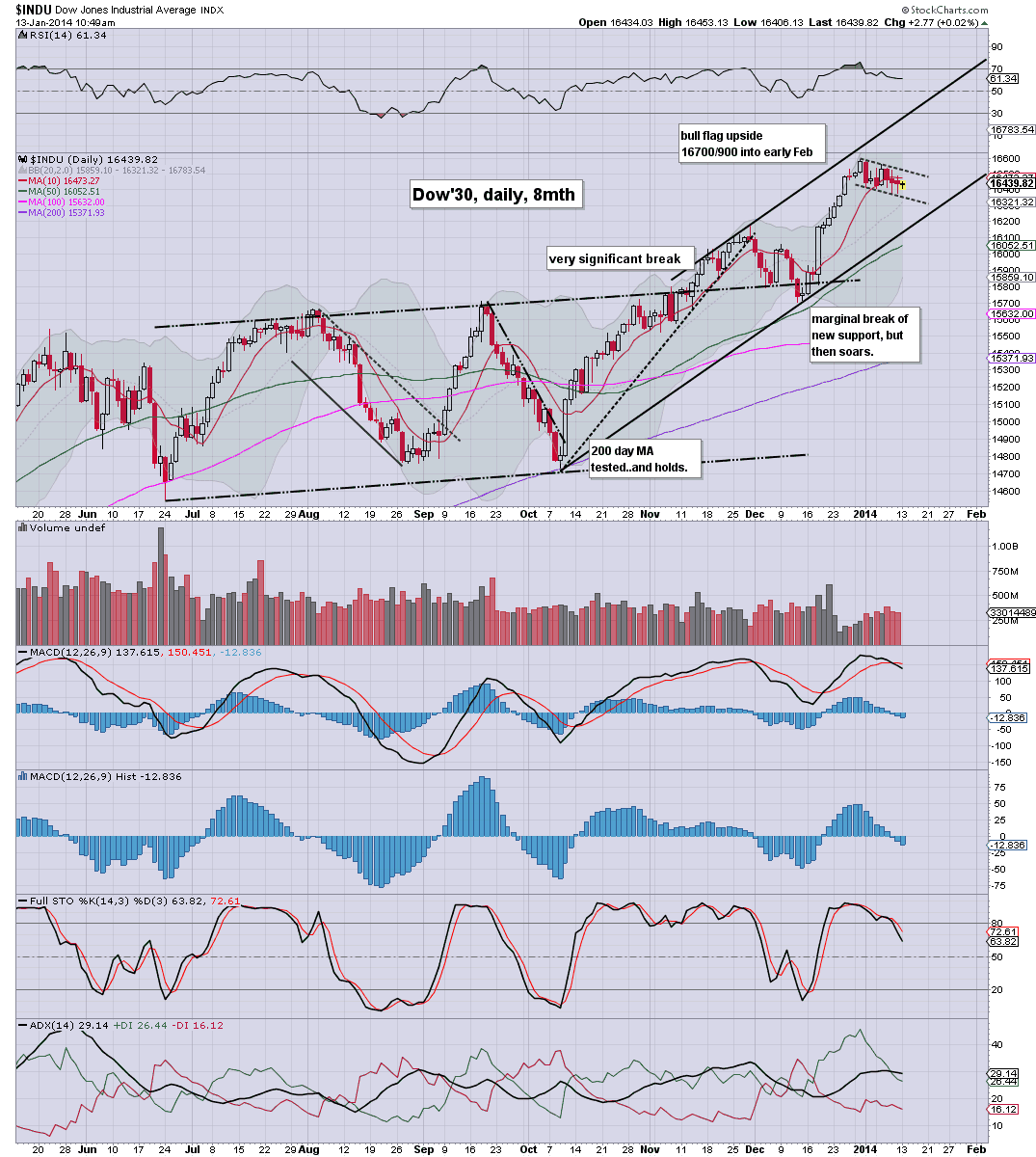 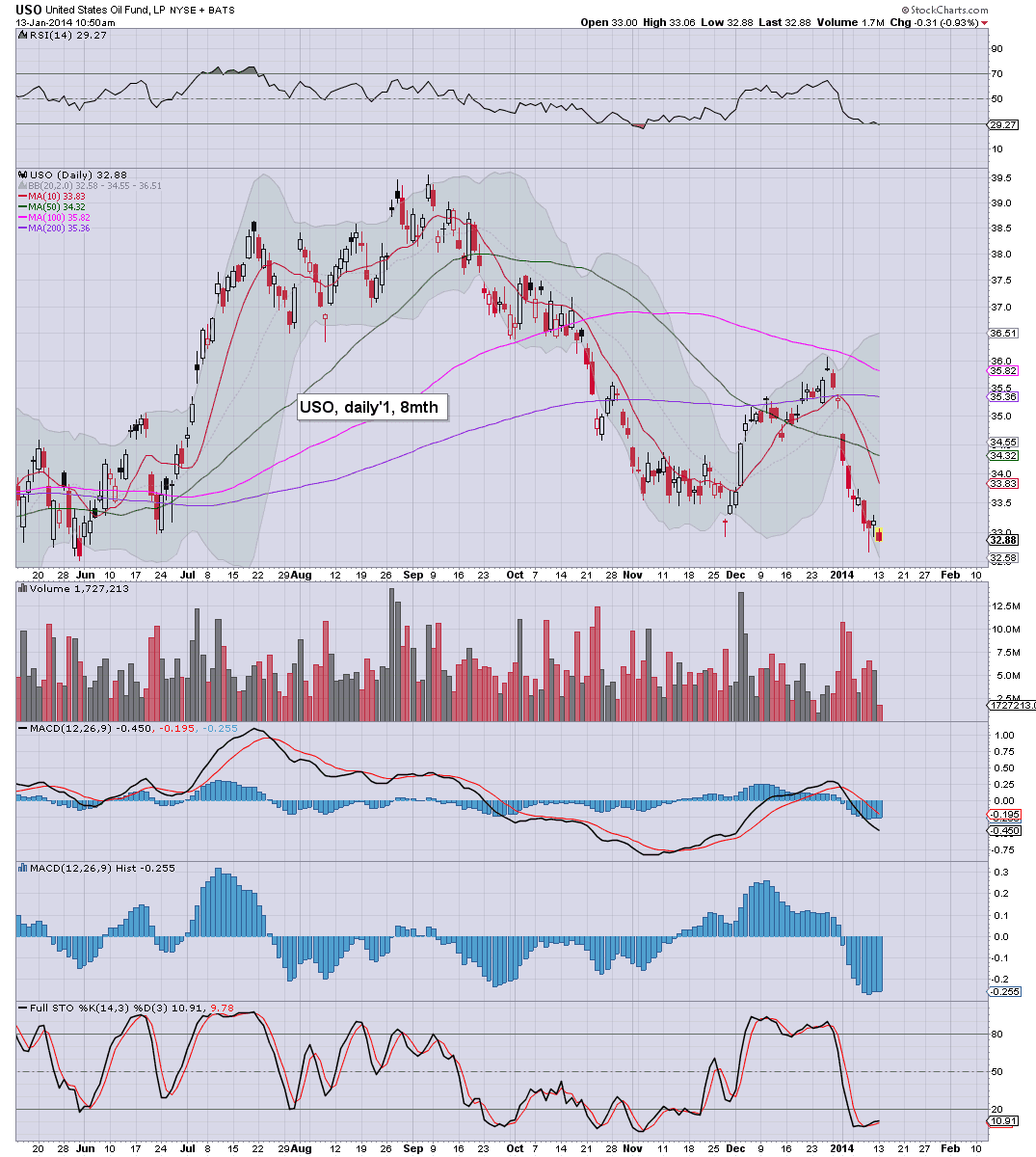 Huh? How are we going to see consistent major declines, when we have this sort of price action.

After all, the past week - if you look at the daily MACD cycle, is the DOWN cycle. A down cycle..where we are a mere 6pts from the historic high.
--


Posted by Trading Sunset at 15:52:00
Email ThisBlogThis!Share to TwitterShare to FacebookShare to Pinterest

The market opens with the same weak minor chop that we saw for much of last week. This still appears to be the best the bears can muster. Metals and Oil are both moderately lower. With heavy QE-pomo later this week, equity bears face the usual problems. 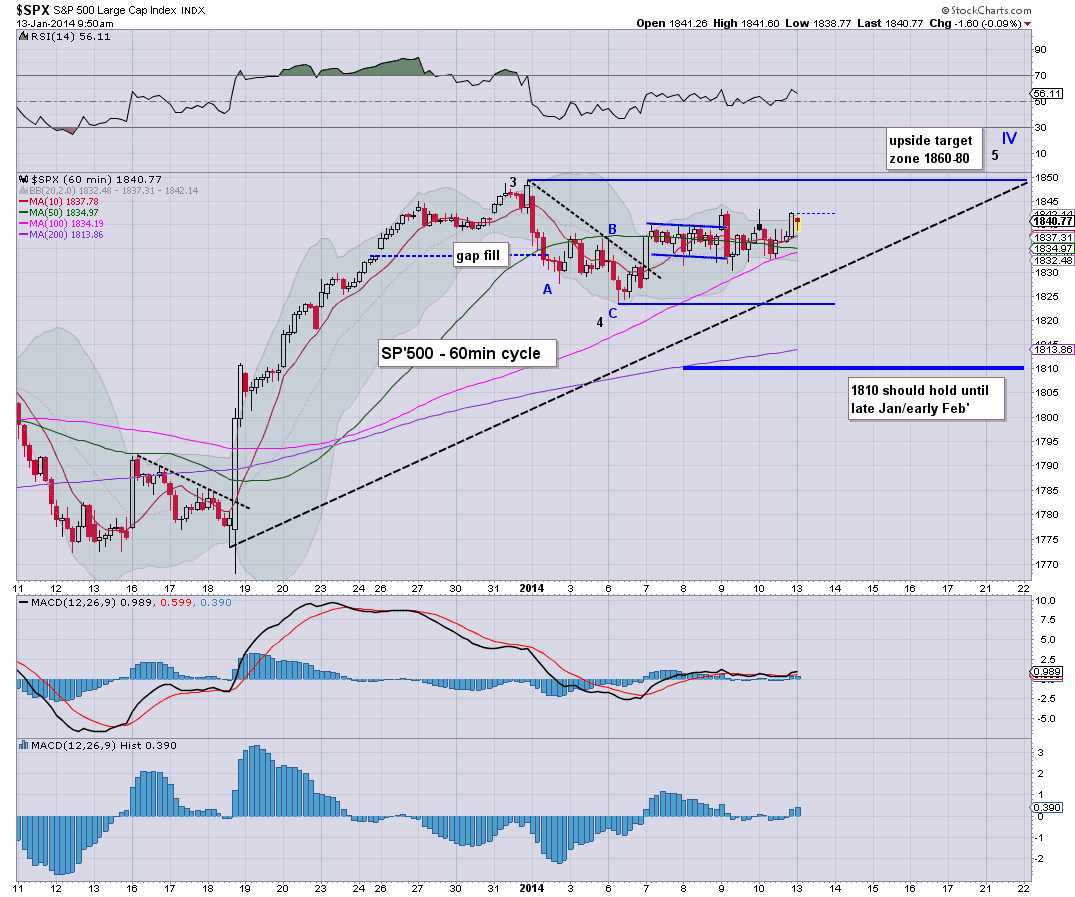 *VIX has broken into the 11s...despite the main indexes being moderately red. Market remains utterly fearless.
--

Not the most exciting of opens, but as ever..there is action if you look hard enough. I realise there is a lot of talk - not least using the 1929 analogy, but frankly, that seems like the same crazy talk we've seen since early 2012.

--
*notable strength in Ford, and we already have a brief break over the 50day MA. 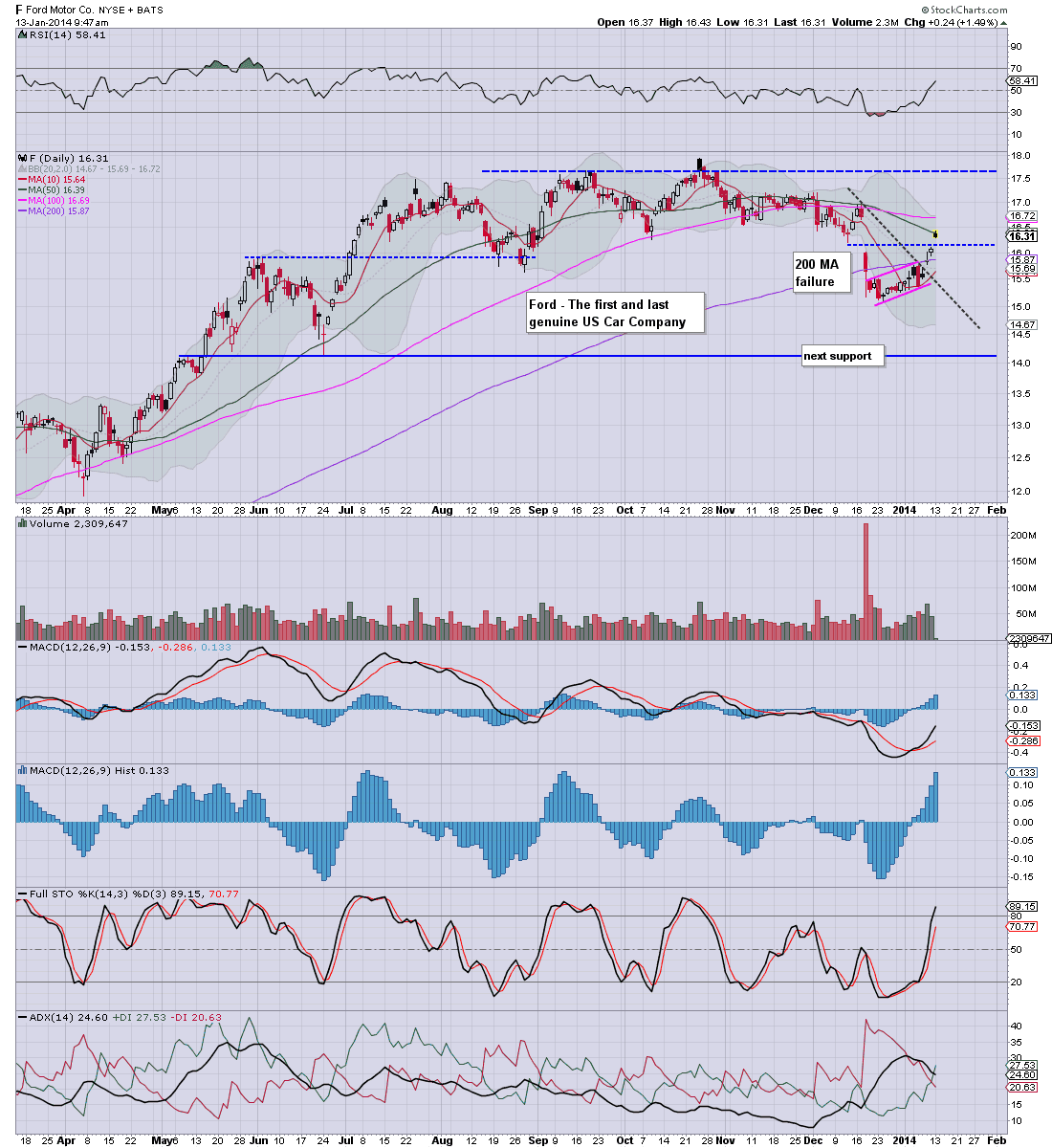 Tech behemoth...HPQ +3.5%. Ironically, since it was booted from the Dow index, the stock price has done well.

VIX told the tale at the open...with the break into the 11s.
Posted by Trading Sunset at 14:53:00
Email ThisBlogThis!Share to TwitterShare to FacebookShare to Pinterest 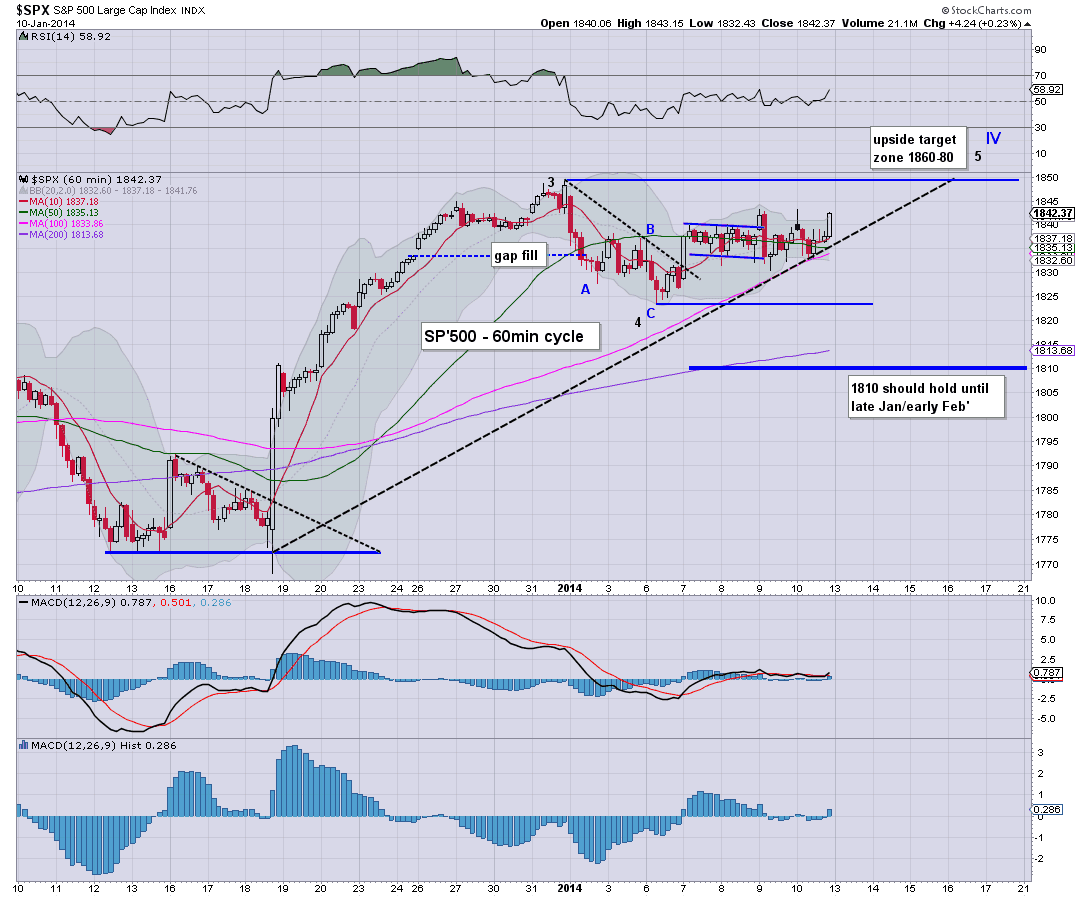 There sure has been an awful lot of doomer talk over the weekend in the chart/blog sphere. This is pretty surprising, considering the past week of price action, which is indicating the market is still very strong.


9.23am.. Ford, +1.6%...good follow through from last weeks break back over the 200 day MA. Next to clear the 50 day MA.. in the  16.40s. If it can hold that...then the original target in the low 14s looks off the table.
Posted by Trading Sunset at 13:44:00
Email ThisBlogThis!Share to TwitterShare to FacebookShare to Pinterest
Newer Posts Older Posts Home
Subscribe to: Posts (Atom)