US equity indexes closed moderately mixed, sp +3pts at 2423 (intra high 2432). The two leaders - Trans/R2K, settled +0.9% and -0.1% respectively. Near term outlook offers renewed downside. Most bearish case in first half of July would be sp'2352/48, with Nasdaq in the low 5900s. Broadly though, still bullish, as earnings and econ-data are still coming in 'reasonable'. 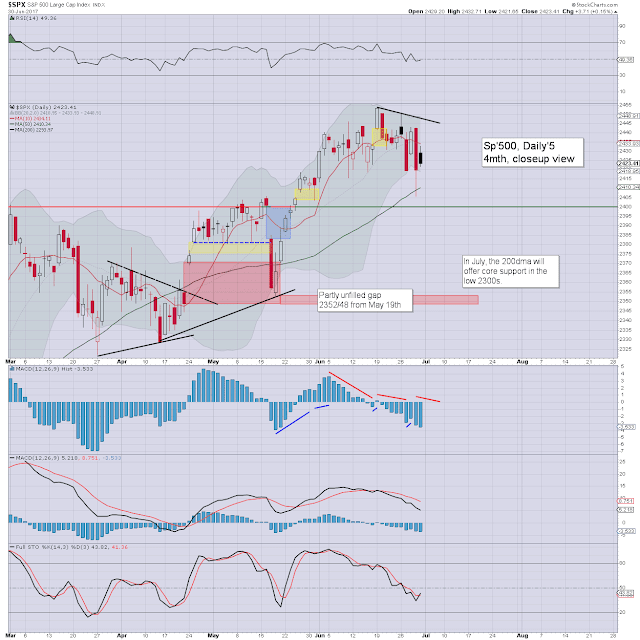 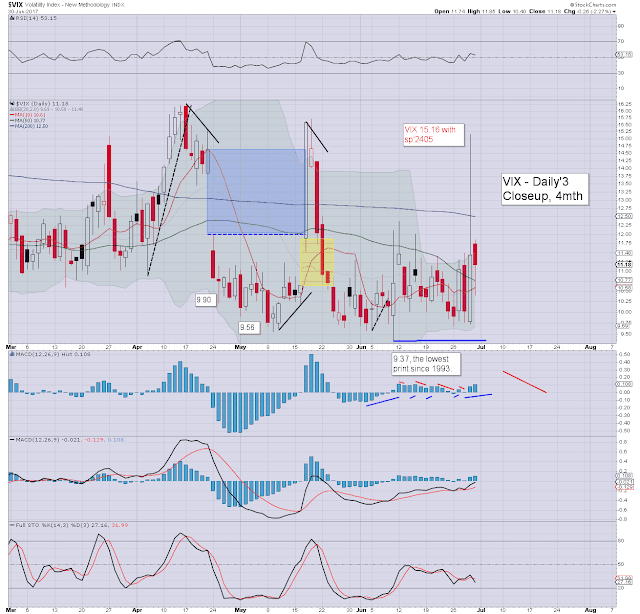 It was a rather choppy day, as opening gains failed, with the Nasdaq comp' turning fractionally red. Yet with WTIC oil building very sig' gains of 3%, equities leaned upward into the late afternoon.

The final hour of the week/month/Q2/H1 was rather interesting. After a new intraday high of 2432, there was a distinct case of 'rats bailing into the weekend', with the sp' settling just fractionally higher. Nasdaq notably closed a touch red.

It was a mixed day for volatility, generally in 'cooling mode' (intra low 10.40 in early morning), but climbing into the close, as equities rapidly cooled.

Near term outlook is bearish, and note today's black-fail candle for the sp'500. Such candles are not to be dismissed lightly!
-- 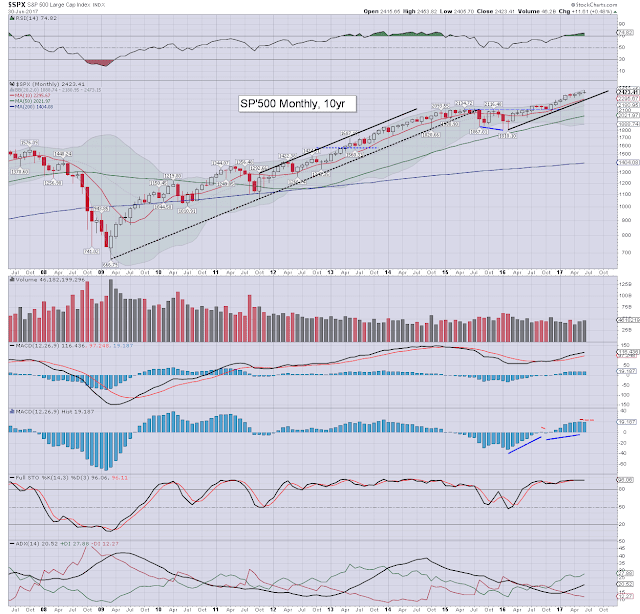 The sp' broke a new historic high of 2453, but settled June net higher by 11pts (0.5%) at 2423. Underlying MACD (blue bar histogram) is showing a fractional rollover, but remains strong positive. Even if the market was to decline from current levels, we'd not seen a critical bearish cross until at least Sept/Oct.


--
Special update on the freakshow entertainment that is Blue Apron (APRN) 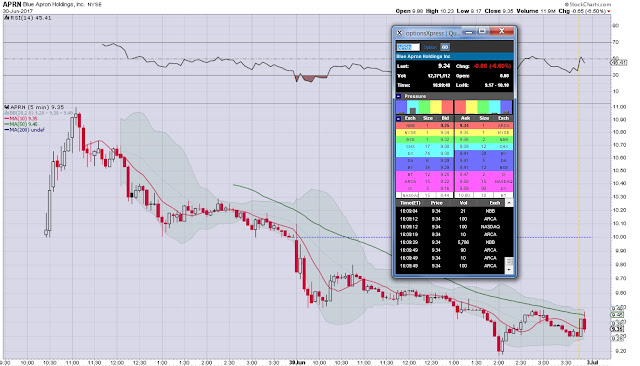 
Here in the city of towers... 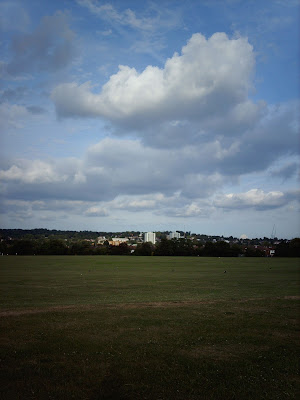 ...  many are in the early phase of having flammable panels (produced by Arconic) removed. I imagine some like Krugman would call such a situation a positive for the UK economy, not least in terms of employment.

*the weekend post will appear Sat'12pm EST, and will detail the World monthly indexes. It remains my most important post of the month.
Posted by Trading Sunset at 00:00:00
Email ThisBlogThis!Share to TwitterShare to FacebookShare to Pinterest

Back on the slide 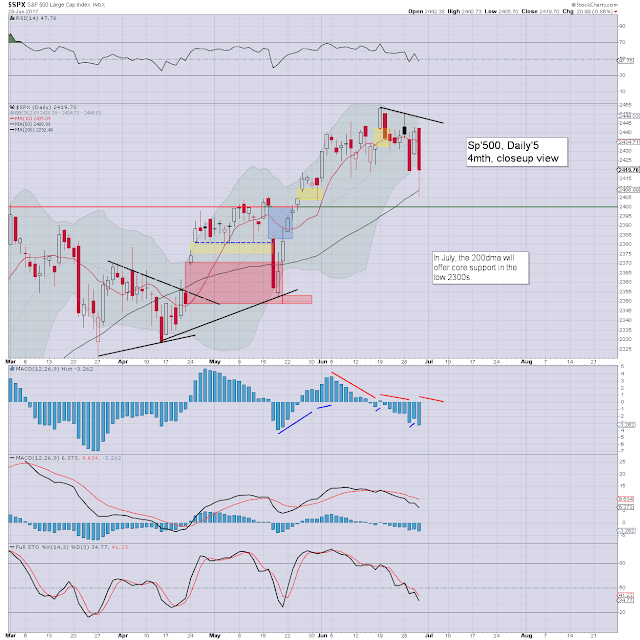 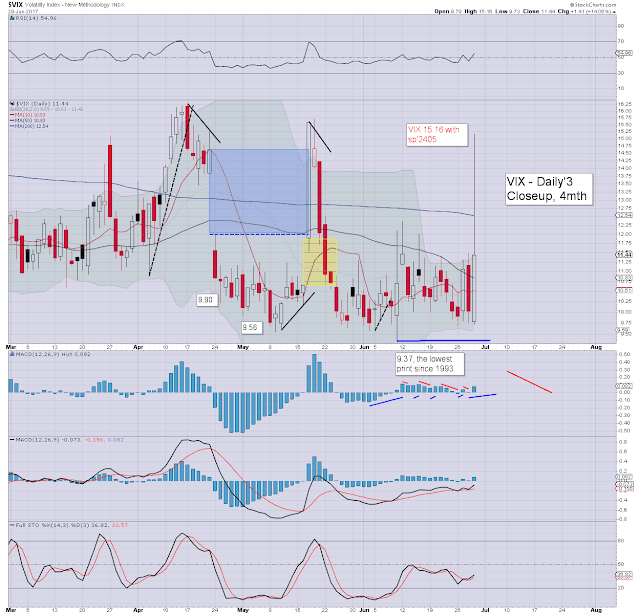 US equities opened in minor chop mode, but quickly leaned lower. Things spiralled into the afternoon, as the Tuesday closing low of 2419 was broken under. There was a key break of the 50dma, although settling well above it.

With equities breaking multiple aspects of support, the VIX soared into the afternoon, maxing out at 15.16. This notably filled a gap of 13.25/14.75 from May 19th.

Further downside? The breaks of the 50dma in multiple indexes certainly leans toward the bears. If the market can break under the 2400 threshold within the next 1-5 trading days, then a bonus washout to around 2352/48 is on the menu. That would give the mainstream cheerleaders of clown finance TV a good scare, and that is always a good thing.
--

Today saw the IPO of Blue Apron (APRN). Just a few days ago, many were looking for an initial offering price >$15. Instead, all the market was willing to offer this morning was $10. 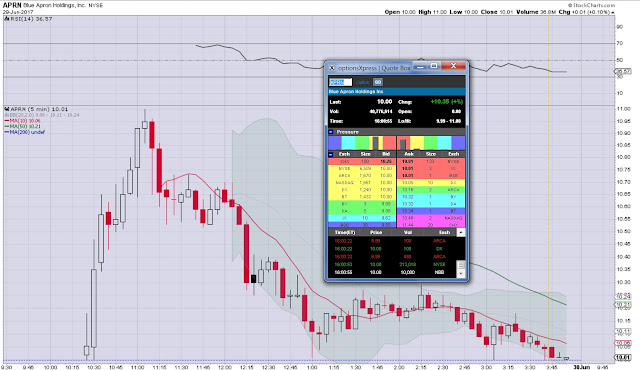 Across today it was pretty amusing to see the underwriters - GS, JPM, MS, and Barclays (of the UK) have to periodically initiate an 'infinity support bid', to keep the stock above the $10.00 threshold. In the above screenie, you can see the massively big numbers on the bid side across multiple regional exchanges. Clearly, 'they' won't be doing that for very long.

Is was notable there were a couple of trades that did manage to get through the 'infinity support bid', just after the close. 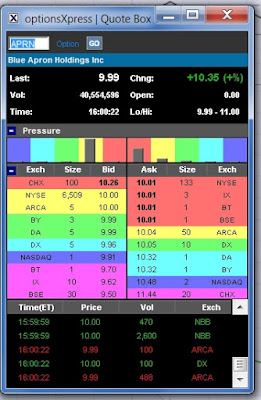 Podcast from Coffey and Dr J.

Tomorrow will be important, as its not just the weekly close, but end month, Q2, and the first half. For those with an interest in the bigger picture, this weekend's post covering the World monthly indexes will be a must-read!