With equities closing broadly lower for a second day, the VIX was naturally on the rise, settling +6.3% @ 14.10. Near term outlook is for continued equity downside, and if sp'2060s, the VIX should be in the 16/17s.. if briefly. The big 20 threshold looks out of range in the current up cycle. 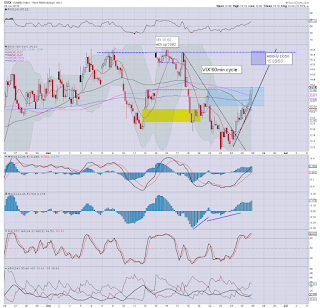 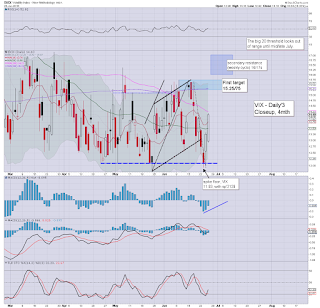 US equities closed broadly weak, sp -6pts @ 2102. The two leaders - Trans/R2K, settled -0.8% and u/c respectively. Near term outlook is very bearish into the weekly close, with viable further downside to the sp'2060s - with VIX 16/17s next Mon/Tuesday. 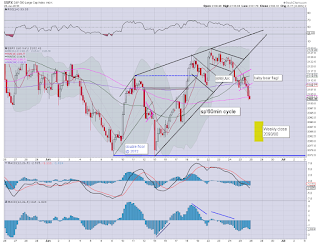 *closing hour was a little choppy... but still.. nothing for the bears to be concerned about.
---

With the second consecutive net daily decline, the market is looking highly vulnerable into the weekly close.

*I remain short INTC.. and long VIX, and have little concern about holding across into next week.

-
more later... on the VIX
Posted by Trading Sunset at 21:01:00
Email ThisBlogThis!Share to TwitterShare to FacebookShare to Pinterest

The baby bear flag that developed across today has already been confirmed, with renewed weakness to sp'2101... along with VIX 14s. Continued broad.. and more powerful downside looks due into the coming weekly close. First target is the sp'2090/80 zone.. with 'best case' of the 2060s next Mon/Tuesday. 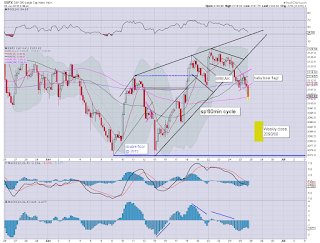 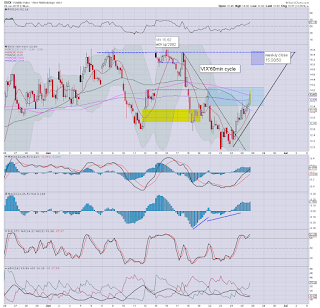 It is always pleasing to see price structure pan out as expected. Today is going rather well for those in bear land.

Clearly, the declines are still only moderate, but the stronger action looks due tomorrow.. and probably into next week. 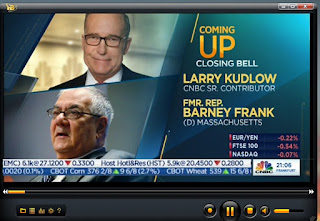 3.44pm.. weakness into the close... the only issue is whether VIX 14s... for a daily close.
Posted by Trading Sunset at 19:50:00
Email ThisBlogThis!Share to TwitterShare to FacebookShare to Pinterest

US equities are broadly flat, unable to climb above the opening high of sp'2115 (with VIX intra low of 12.92). A net daily decline for most indexes remains very viable, but regardless of the exact close, price structure is a very clear bear flag.. offering a weekly close in the sp'2090/80 zone.. with VIX 15s. 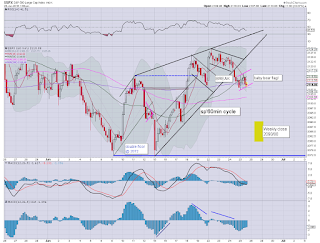 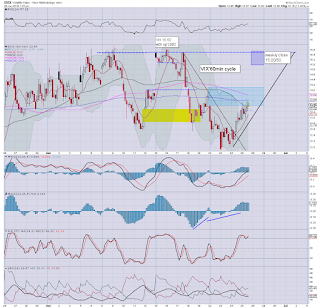 Certainly, the bear flag does not need to break today... there is no hurry, and these things tend to drag out longer than I usually expect.

What the short term traders should now be asking themselves is.. do I want to hold long across the weekend?

Market unravelling with increasing concern of no Greek deal.

A daily close <sp'2100 is now on the menu... and that is a bonus for today.
Posted by Trading Sunset at 18:53:00
Email ThisBlogThis!Share to TwitterShare to FacebookShare to Pinterest

Yesterday saw the big ascending wedge broken, and after some morning chop, we now have a baby bear flag. More significant weakness into the weekly close.. and stretching across into next week looks probable.
The sp'2060s (if briefly) should equate to VIX in the 16/17s. 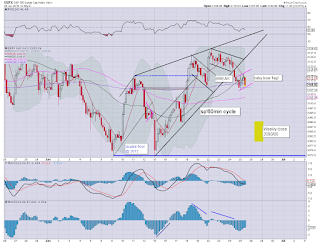 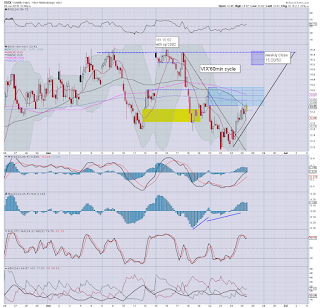 A rather clear flag. Certainly threat of another minor wave higher this afternoon, but overall.. it certainly bodes for more significant weakness tomorrow.

After all, who the hell wants to be long across the coming weekend? Should be a powerful instance of 'rats selling into the weekend'.

--
back at 2pm
Posted by Trading Sunset at 17:49:00
Email ThisBlogThis!Share to TwitterShare to FacebookShare to Pinterest

US equities remain in minor chop mode... before the downside resumes. Late day weakness looks probable, with a net daily decline across most indexes. Transports remains notably weak... seemingly headed for 8K... secondary target is the Oct' low of 7700. 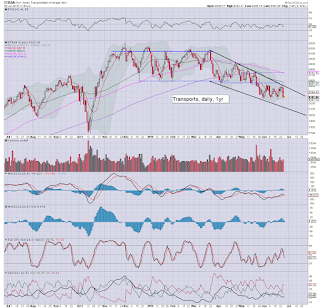 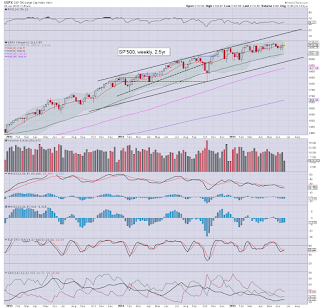 On the bigger weekly cycle, the sp'500 sure looks tired. A weekly close <2100 (probable.. in my view).. would make for a pretty bearish weekly candle.. offering further downside next week.

A hit of the lower weekly bol' - currently @ 2057 (with the 200 day MA lurking nearby), would open up a more sig' bearish wave (under the giant 2K threshold) later this summer, but more on that.. if we get there.

VIX update from Mr T.   due


12.28pm.... baby bear flag on the hourly cycle.... market does look maxed out from 2115... weakness into the close
Posted by Trading Sunset at 16:52:00
Email ThisBlogThis!Share to TwitterShare to FacebookShare to Pinterest

US equities are seeing some minor chop, with a probable high of day at sp'2115. VIX is broadly flat in the low 13s. Daily MACD cycles are swinging in favour of the equity bears, a very significant equity down day looks probable.. tomorrow.. or more likely... next Monday. 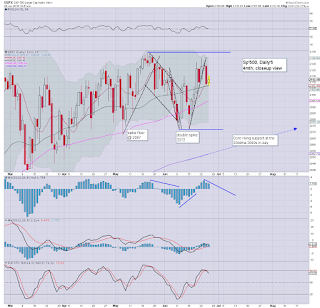 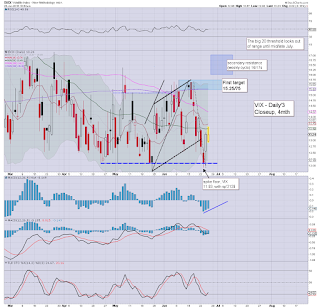 I am trying to not get lost in the minor noise.. and for this hour.. a reminder of the daily charts.

At current rate, we should see a more significant move within the next day or two.
--

strength: INTC, +0.9% @ $32.20...  price structure remains a large bear flag though... and I remain short.
Posted by Trading Sunset at 15:53:00
Email ThisBlogThis!Share to TwitterShare to FacebookShare to Pinterest 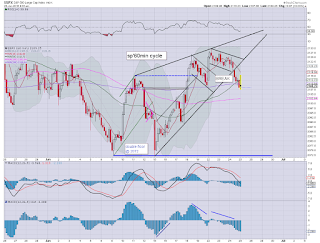 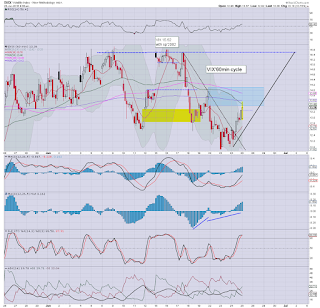 *Classic opening reversal... with black-fail candles all over the place.
--

So much for the overnight gains... we're set for further weakness today...  and into the weekend.

I remain waiting for more whining and bitching from Greek leader Tsipras. He is clearly looking to hold out for more concessions from the Troika... as the clock ticks closer to end month. 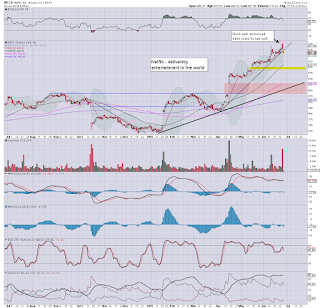 Daily chart looks plain ugly.... first target is the little price gap zone around $600, which is a full 10% lower.
Posted by Trading Sunset at 14:53:00
Email ThisBlogThis!Share to TwitterShare to FacebookShare to Pinterest 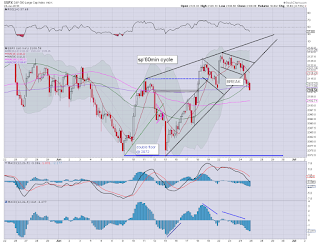 Futures have cooled somewhat from earlier highs as sporadic headlines about Greece continue to give concern to some traders.

A Greek deal looks as far away as ever.. and the clock is ticking.
-

All things considered, there is little reason why the opening gains will be able to hold... I expect a second net daily decline. VIX 14s would offer further clarity that things will continue to unravel into next week.

Overnight action: China, -3.5% @ 4527.. having fallen apart in the late afternoon. Again.. the day to day swings are increasingly wild... a break <4K looks very probable. I remain somewhat bemused that many are not highlighting the 3400s as a downside target.

Opening black-fail candle in the R2K.... again, suggestive this market is going to struggle today.

notable weakness: NFLX -2.6%... major sell side underway
Posted by Trading Sunset at 13:20:00
Email ThisBlogThis!Share to TwitterShare to FacebookShare to Pinterest

Despite renewed concern that there will be no Greek deal agreed by end month, the USD saw a net daily decline of -0.2% @ DXY 95.48. The secondary target zone of 92/90 remains very viable, it will likely require some kind of last minute Greek deal. Regardless of the short term, the DXY 120s are coming. 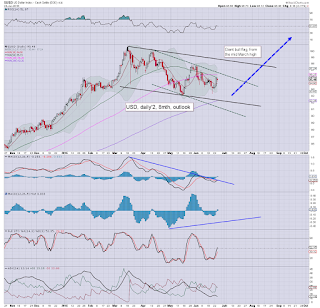 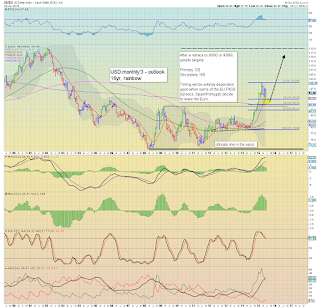 *I remain looking to go long the USD via UUP in the low $24s. For now, I'm content to wait another few weeks, not least if a Greek deal is arranged around end month.
-

Nothing has occurred to change my broader view for King Dollar. It would still seem the USD has built a giant multi-month bull flag, having seen a very natural retrace from the high of DXY 100.71 in mid March.

I am aware of a fair few analysts who note resistance at DXY 105, but really, once we break new multi-year highs, it should be a broadly straight hyper-ramp to the 120s into next year.

*two fed officials will be speaking, but I don't believe the issues to be discussed will be relevant.
-- 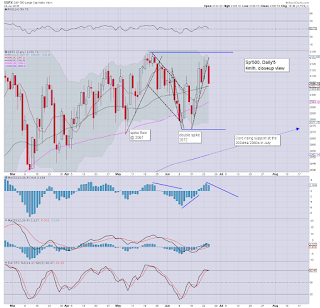 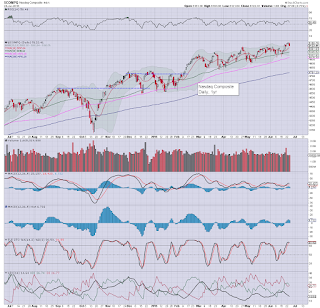 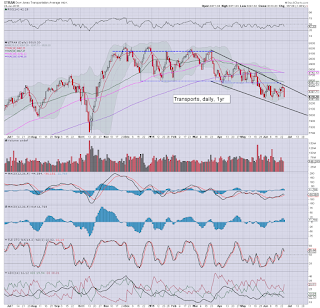 A useful day for the equity bears. We have a clear break lower on all the main US indexes. Further weakness looks due into early next week.

Not surprisingly, the Transports was particularly weak today, and that was despite WTIC Oil prices seeing a net daily decline of -1.4% @ $60.27. Next support is the big 8K threshold, and that is another 3.7% lower... which would probably equate to sp'2060s.
--