Volatility holds some of the gains 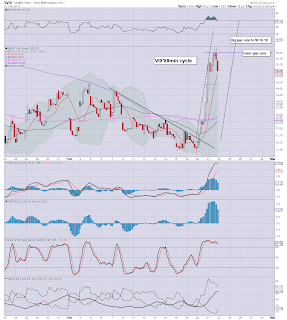 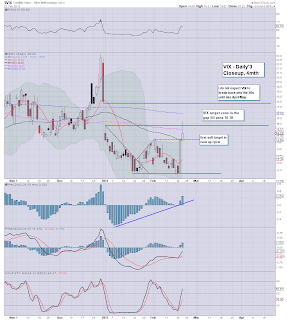 A somewhat disappointing close with over half of the earlier VIX gains evaporating, but the near term trend is still upward.

Today was only day'2 of this up cycle, and its reasonable to expect at least another day or two higher.

I am long VIX, but would look to exit before the weekend, especially if sp' can hit 1490 tomorrow.
--

More later, on the indexes
Posted by Trading Sunset at 23:00:00
Email ThisBlogThis!Share to TwitterShare to FacebookShare to Pinterest

Despite the closing hour mini ramp, the bears still managed the second consecutive daily decline. With VIX having broken into the 16s, and the USD at one point above the important 81.50 level, bears are seeing their first significant down wave since late December. 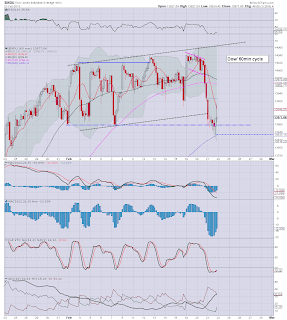 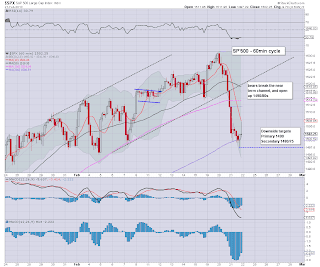 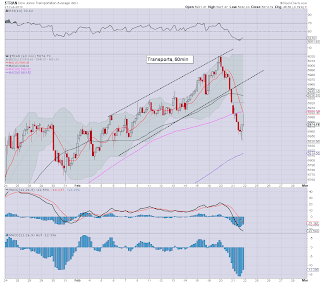 The closing few minutes were somewhat weak, so..that's a minor bearish sign for the bears tomorrow.
---

I still don't see this as anything more than a brief reset, before yet another major up wave.
--

More later, on the all important VIX
Posted by Trading Sunset at 21:02:00
Email ThisBlogThis!Share to TwitterShare to FacebookShare to Pinterest

3pm update - selling into the close?

Its getting a bit choppy this afternoon, Mr Market wants to close in the 1500s, but the bears know they have the short term momentum. The VIX is holding pretty significant gains of 8%. Perhaps, more importantly, the USD is 0.39 @ 81.46. Any close >81.50 would be VERY significant. 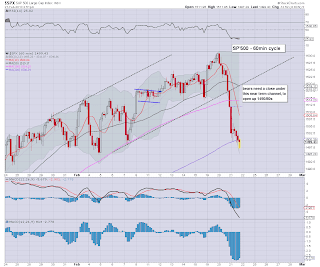 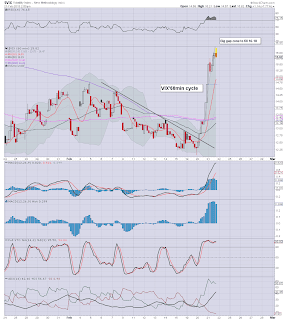 It does look like we'll hit 1490 tomorrow. The only issue is whether we'll get some kind of little bonus wave lower to the 1480/75 area..before the weekend.

That'd give the bulls a nice little scare, before their saviour appears next Tuesday.
--

*metals losing some of their earlier gains, especially silver which might close red. Best left alone until next week.
--

back after the close

Posted by Trading Sunset at 19:52:00
Email ThisBlogThis!Share to TwitterShare to FacebookShare to Pinterest

Mr Market is really struggling to hold sp'1500. Whether or not we close <1500 today doesn't seem too important. We have a solid decline continuing, with first target of 1490..and then 1480/75 - the latter of which will be somewhat difficult to hit. 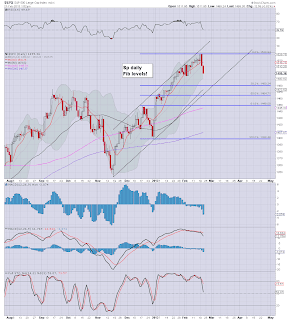 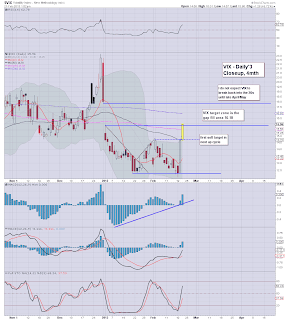 I realise many are now seeking much lower levels - with the weekly index charts rolling over, but I still think its just a tease for the bears.

back at 3pm.
Posted by Trading Sunset at 18:54:00
Email ThisBlogThis!Share to TwitterShare to FacebookShare to Pinterest

Mr Market is surprisingly still weak. It looks like the dip buyers are going to be absent until at least the sp'1490/80 zone.  Metals are seeing a bounce, but its on shaky ground, not least with the dollar again higher. VIX looks like it can close in the low 16s, opening up a full gap fill to 18. 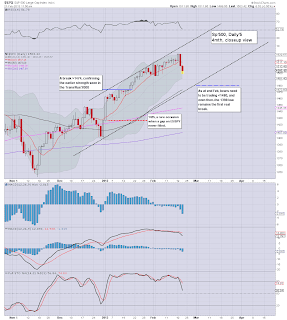 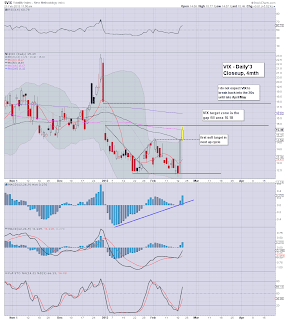 I'm guessing the market will close lower, but a sub 1500 close won't be easy.

*I'm still holding a VIX call block - which is resurrecting itself back from the dead,  I'll look to drop around sp'1490..whenever that might occur, regardless of actual VIX level.
--

All things considered, I just can't take these declines seriously.

The POMO is still going. The HFT algo-bots are still plugged in, and the cheer leaders on clown channel are still generally bullish. CNBC even wheeled on Larry Kudlow this morning to highlight that the sequestration issue is largely irrelevant..and I have to agree with him.
-- 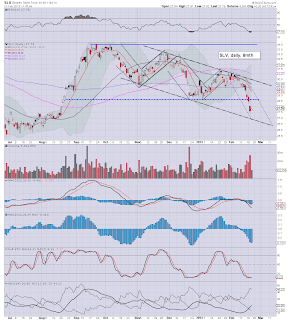 SLV probably needs a few more days in this kinda range before any hope of multi-day upside.
Posted by Trading Sunset at 16:51:00
Email ThisBlogThis!Share to TwitterShare to FacebookShare to Pinterest

Good morning. The bears are seeing some important follow through to the downside. It'd seem likely we'll bounce into the afternoon though, and only see a close <sp'1500 tomorrow. First target is 1490, and then 1480. I do not see anything <1480 in this down cycle as viable. 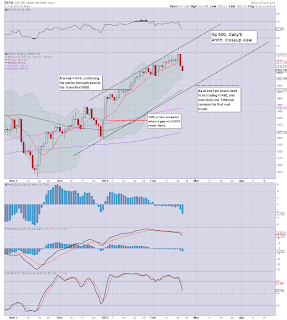 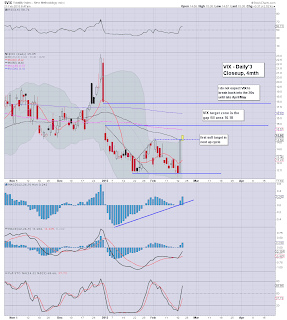 A useful start to the day for the bears.

Yet, we're now only 13pts away from the first target, and that could easily be all the bears are going to get. Perhaps 1490 equates to VIX 16 ?

*Metals..opening a touch higher, but showing weakness. They could easily just chop around for a few days - forming a floor, whilst the equity market drops to 1490/80. 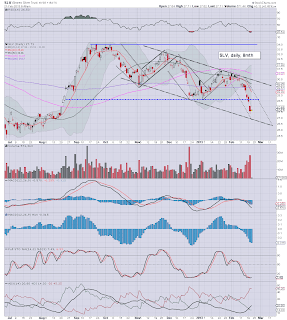 For those looking to go long the metals, probably best to wait until early next week.
Posted by Trading Sunset at 14:51:00
Email ThisBlogThis!Share to TwitterShare to FacebookShare to Pinterest

The Bears are being teased

The biggest index declines of the year, and the largest VIX jump, yet its very likely just a little tease to the bears. There is still huge underlying upward pressure in the US markets. Near term downside looks limited to sp'1490/80, with VIX in the 17s.

To close today, here is an assortment of things, that I hope will keep things in perspective. 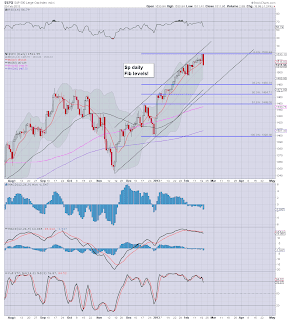 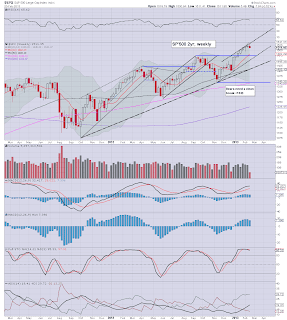 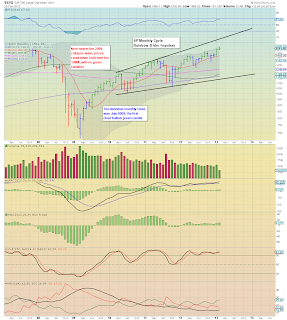 Finally, a little dynamic price action that actually makes this market at least somewhat interesting! After a good six weeks of near total algo-bot melt...today was a relief.

There is a basic fib retracement level target of sp'1480...that's just about viable, whilst still holding within the broader upward channel.  Maybe that can be hit next Tue/Wednesday*

*next week will be primarily focused on what the Bernanke has to say. He is due for his twice yearly appearance before the Senate and House finance committees - which are being held next Tuesday and Wednesday.

Finally, I think its critical to keep some attention on the US Dollar. The USD saw some very significant strength today, and that's no doubt why the market - and those precious metals, saw increased weakness in the afternoon. 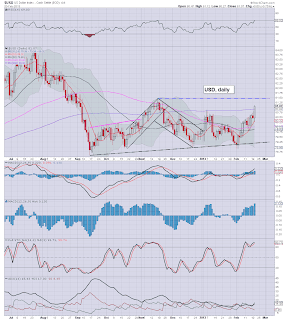 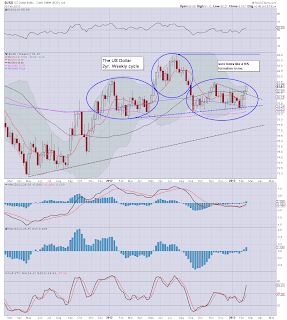 Will the H/S formation be violated to the upside? Arguably, any weekly close >81.50..and the doomer bear scenario of 'ides of March' comes into play.

Right now though, I'm still guessing that won't be the case.

Bears will surely have to endure at least one further wave higher. A chart I posted at the weekend, might be useful to keep in mind next week. 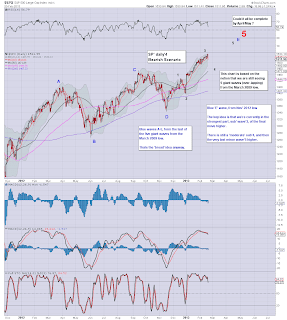 I still find it difficult to believe we'll put in a key multi-year cyclical top this spring. Until the Fed stop the POMO program, I just can't see any major index declines. Yet perhaps we can chop around between sp'1600-1400 for a few months this summer before the Fed end QE in the July-Sept period?

It was an interesting day, hopefully it will be much the same tomorrow.

The main indexes saw their biggest decline of the year, although we remain very close to the recent tops. Transports and IWM - both the key leaders, saw very significant declines of 1.6 and 1.9% respectively. Bears will need follow through on Thur/Friday, and get a daily close <sp'1500. 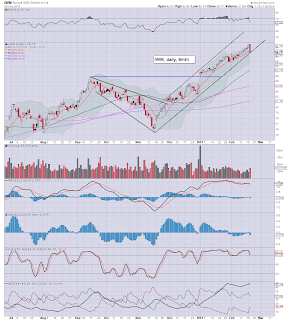 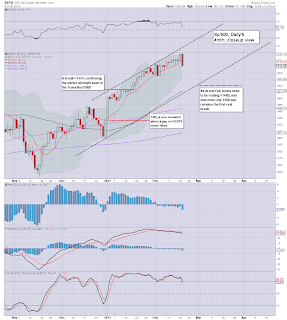 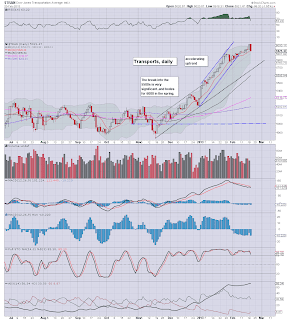 First, you can see that IWM (rus'2000) is already close to breaking the channel on the daily cycle. That's kinda important to keep in mind. Downside looks to be the 50 day MA @ 88 - next week.

SP' saw a pretty significant decline - bigger than the one on Fri' Dec'28th. You remember, the one which Zerohedge deemed a 'bloodbath'...only to then see a two day hyper ramp from sp'1398 to 1456.


Bears need to be careful here

The broader trend remains strongly higher, and my best guess is we'll only decline to around sp'1490/80 by early next week. A brief spike in the VIX to the 17s seems to be the most likely scenario, before another equity wave higher into March/April.

A little more later, with a few charts I think are particularly important.
--
Posted by Trading Sunset at 01:00:00
Email ThisBlogThis!Share to TwitterShare to FacebookShare to Pinterest
Newer Posts Older Posts Home
Subscribe to: Posts (Atom)