A choppy day in equities, lead to a choppy day in the VIX. The VIX never did go net green - even when the sp' went red. The VIX is cooling off, and closed the day -11% @ 16.87. There is a high likelihood the VIX has one final small fifth wave higher to come in the next day or two. 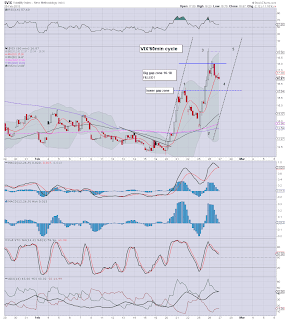 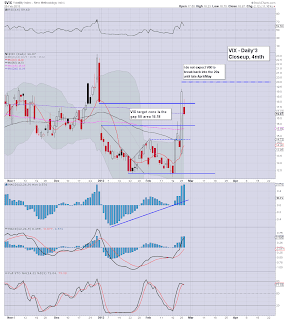 The VIX count looks pretty good, and that sure looks a classic wave'3 spike. So..that would make today's decline a 4. The 4 could continue across much of Wednesday..in which case..the 5 would take us into Thursday.

On any basis, I don't expect VIX much higher in this cycle.

It is entirely reasonable, and important to keep in mind that even though I expect one final VIX wave higher - as seen on the hourly chart, the final fifth wave might actual truncate - fall short, of the wave'3 high of 19.28.

As things are, I don't expect VIX to break above the key 20 threshold in the coming few days.

Perhaps the fifth will make a fractionally higher high..but regardless, it will probably be the last time we see VIX in the high teens for some weeks, perhaps even a few months.
-

A bit of a choppy day. The opening gains of 0.7% failed entirely, but as was the case in much of Jan/Feb, we saw a latter day recovery. It does look like this is merely a wave'4 bounce though...downside to sp'1480/75 looks very viable within the next few days. 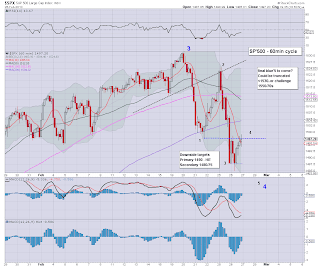 Certainly, the action today was pretty confusing for many, and arguably a bit of a mess for anyone who tried to trade ti - especially for those using tight stops.

There looks to still be good a chance of one final wash-out move lower.

I continue to sit back..and waiting for a decent place to go long.
--

3pm update - bouncing into the close?

The market has recovered almost all the gains lost in the morning. It remains likely a wave'4 bounce. Where this latest bounce ends, is impossible to say, it could even continue across much of Wednesday. Regardless of the current bounce, a cycle low of 1480/75 remains the primary level to go long. 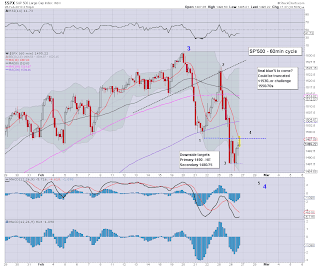 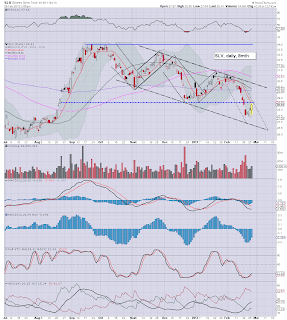 It remains choppy..which is often the case for this mess wave'4s. In many ways they are 'best left alone'.

With the Bernanke speaking again tomorrow, and more key econ-data, it should offer a real chance of one final wash-out wave.
--

Metals remain reasonably strong..but they are STILL within broad down trends, that stretch back all the way to the QE3 mid-Sept' highs.
Posted by Trading Sunset at 19:58:00
Email ThisBlogThis!Share to TwitterShare to FacebookShare to Pinterest

Mr Market is battling higher after a pretty choppy morning. The gains are still only moderate. It doesn't look like a bigger cycle low is in yet, and I'm still seeking a further wave lower to sp'1480/75 within the next few days. VIX is getting hammered almost 10% lower. 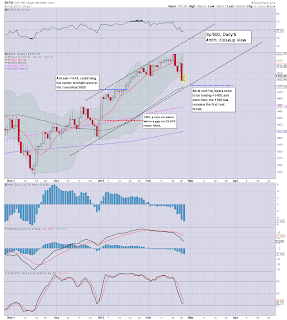 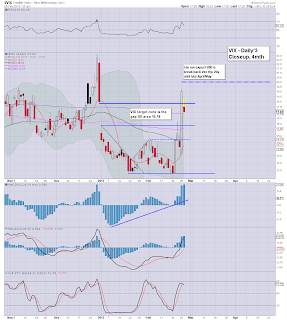 Even the daily charts offer a candle which is arguably showing what is a tiny wave'4 bounce. I'd guess it'll last at least into tomorrow...and if that's the case, then the final wave lower might take until early Thursday..even Friday to complete.

What does seem clear in the broader picture...this is a wave'4 decline, if you count the starting point as the November low of sp'1343.

more on that later.
-

see a nice post, with a chart that I am largely in agreement with @ deflationland

First things first though..lets see this cycle floor, and then see how high the next wave takes us.
Posted by Trading Sunset at 18:55:00
Email ThisBlogThis!Share to TwitterShare to FacebookShare to Pinterest

Mr Market is really struggling after a pretty fierce morning battle. Those earlier index gains are largely gone, and a few indexes are already red. VIX is still -5% though...cooling off after yesterdays 34% explosion. Metals have seen a strong swing to the upside. 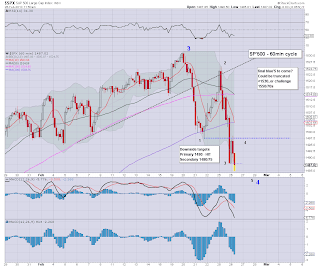 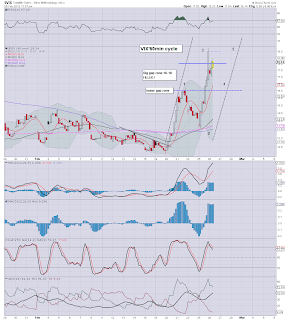 Key rising support @ 1480/75. That will be the place to go long, although I'd rather wait until tomorrow morning.

From what I've read in a fair few places..it'd be a more natural time for a cycle low.

The Bernanke questioning is underway, and the market is looking weak again. Despite good econ-data..the opening gains are failing, and we could easily see red indexes into the afternoon. It remains a tricky market though for bears..the 'bigger move'..is likely already been and gone. 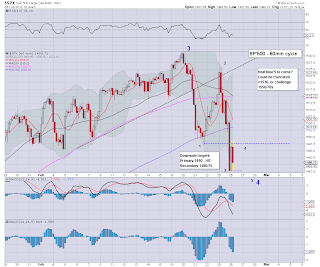 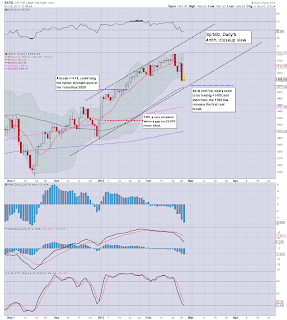 I'm sitting back...going to wait and see how this pans out into tomorrow.

*metals got whacked earlier, but they are back to green again. Its a bit of a war zone today.

Keep ya flak jacket on!
Posted by Trading Sunset at 15:47:00
Email ThisBlogThis!Share to TwitterShare to FacebookShare to Pinterest

10am update - its Bernanke time

Good morning. Markets are seeing a bounce, and this is probably a sub wave'4. Could last into tomorrow, its kinda difficult to say. What is clear though, the major move lower has already now occurred. VIX is -9% already, the 20s do not seem likely for some weeks..if not months. 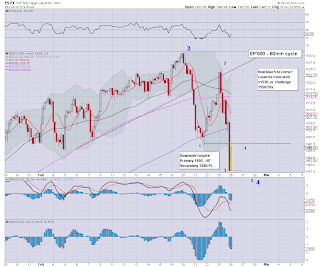 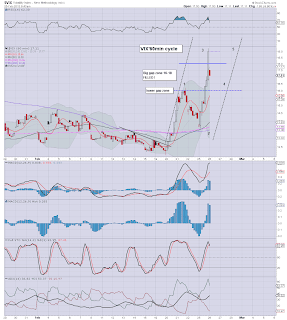 Its time for a few hours of the Ben Bernanke on capitol hill.
-

I'm content to let them whack this nonsense around for a few hours.

I fear a massive stupid ramp...in early March - just like early January.
-
Posted by Trading Sunset at 14:45:00
Email ThisBlogThis!Share to TwitterShare to FacebookShare to Pinterest

Now it gets tricky

A superb and exciting reversal in the equity indexes to begin the week. Yet..we're now a mere 7pts from the primary target of sp'1480.The next day or two is where it really gets tricky. What is clear, any move into the 1460s..and things could get flashy-crashy real quick. 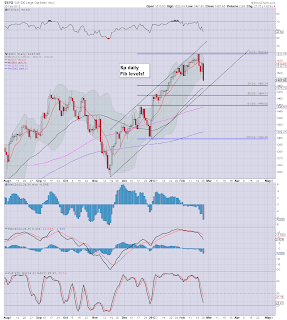 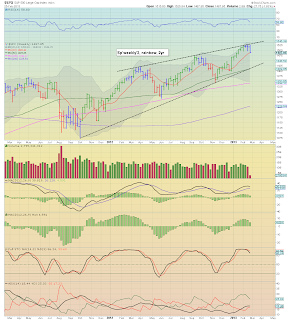 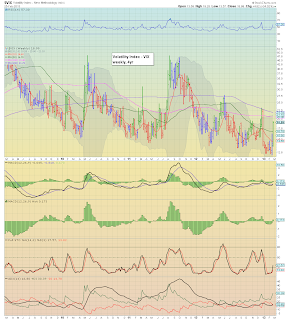 *Special note - the rising channel/support for Tue/Wed will be around 1475..but by Friday it will be 1480

So we've just seen our first really strong down day of 2013, and there could easily be at least some moderate follow through tomorrow to 1480/75.

The big weekly charts are ALL rolling over, and the rainbow chart clearly shows a multi blue candle topping pattern that looks very much like both March and October of last year.

The rising channel/support on the weekly chart is around sp'1415, so there is plenty of downside, for those who are now getting seriously bearish.

As many noticed in early January, the two day hyper-ramp that began the year left a rather rare unfilled gap. Its around sp'1425, and is best seen via a SPY or ES chart.


What is my Tuesday plan?

I bailed on short positions in the closing 15mins. Its been a difficult past few trading days, and I want to start Tuesday afresh.

-If the indexes open UNDER sp'1480...I will not chase lower. I'd actually rather be more content to try to pin a low and go long.

-if the indexes get stuck around sp'1480 for a few hours, and/or there is an opening black candle on the VIX hourly chart..I'll consider taking an initial (minor) long position.


Finally, a reminder on the one really bearish chart I am keeping in mind 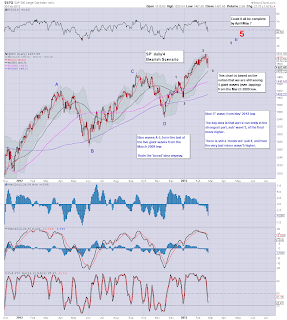 The 50 MA will be a critical area for the bulls to hold this week. Any daily close under that, and the 1425 gap will become the prime target zone. Although if we get down to that level, it would mess up the near term count. 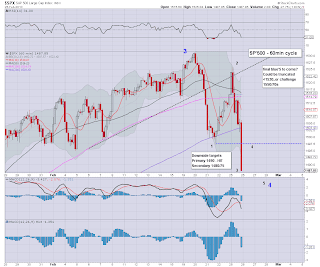 Today's afternoon wave lower certainly is the style of a fierce wave'3. The key issue is what sort of bounce for a '4..before a final moderate drop, which might (but doesn't have to) break the low of wave'3. Arguably, a better place to go long, will be Wed/Thursday.

Bernanke speaks both tomorrow and Wednesday morning - starting 10am, probably lasting until around 1pm. There will be blanket coverage on all clown finance TV networks.

Mr Market will be intently listening, especially for signs that the Chairman will do 'all that is necessary..to keep the Rus'2000 small cap index higher'.

The US market saw a very strong reversal. Opening moderate gains of 0.5% failed by late morning, and with a rather severe fall in the closing hour, most indexes lost around 2%. The VIX surging 35% confirmed the first very strong down day since early November. 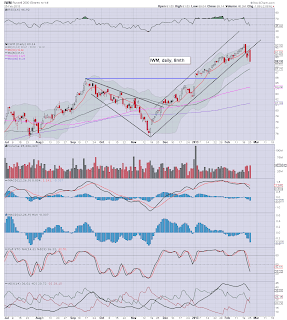 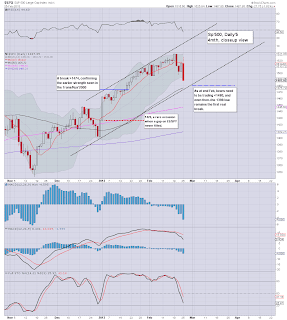 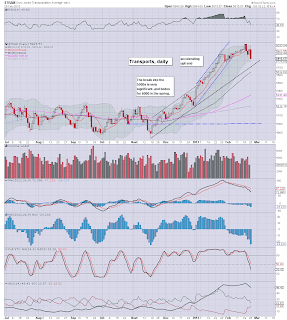 First, I would say it was VERY pleasing to see some good price action today.

The opening gap higher was very annoying of course, but it did indeed fail..and we even hit the first target of sp'1490 by the close.

Next target is sp'1480...supported by the fib' chart, where the 50 day MA is lurking, and where is the huge support on the rising channel.
--