Welcome to the Weekend

Another trading week is complete, its time for a nice 3 day weekend! Lets end the day with looking at those hourly cycles... 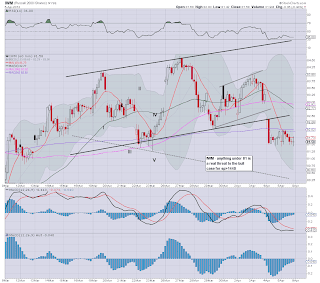 Hmm,we have ended the week with a bear flag - or is it just another test of the floor? This is a tricky situation, and anyone holding across the weekend (myself included), is doing so based on the bigger picture outlook.

From the MACD cycle perspective, we are primed to go +cycle at the Monday open, but just like March 21'st, we could fail, and have a double, or even triple down cycle. A secondary down cycle would at least touch 81 - which puts the inv. H/S theory in critical jeopardy. The doomer-bears will be clawing for a break under 80. 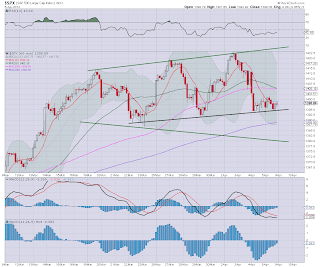 SP' remains stronger than the Rus'2000, and indeed is nicely holding the lower channel line that is now 3 weeks long. I'm guessing we've already seen enough of a decline to complete the down move from 1422 to 1392, and next Monday I am looking for a major snap upward, with an eventual target of sp'1435/40 within a week or two. 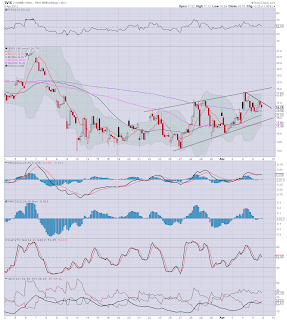 I'm inclined to believe the VIX be back in the 15s on Monday, but we are in a moderate up-channel right now. However, as noted over and over again...whilst the VIX is below 20, all these moves are generally so minor, and largely irrelevant noise.

--
*more later..and indeed a little tomorrow.
Posted by Trading Sunset at 21:53:00
Email ThisBlogThis!Share to TwitterShare to FacebookShare to Pinterest

The Rus'2000 small cap index is suggesting a clear inverse head/shoulders formation is now complete, and with the indexes all ready to snap UP. 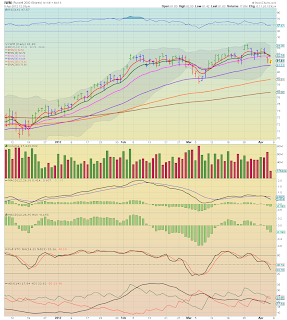 Bulls - who are brave enough to hold Long across a 3 day weekend, might do very well with a giant Monday gap up. Of course...no guarentees in this casino.

Conversely, Bears need to see a break under 81..and preferably 80.00 early next week. A break under 80 would probably result in 76.

The main problem which the bears face are that the World indexes (see my post from last weekend) are all suggesting UP, as are the same indexes from a daily cycle perspective.
-

Target on IWM - assuming it is an inv. H/S, would be somewhere around 88/92 within a couple months.

More after the close.
Posted by Trading Sunset at 17:39:00
Email ThisBlogThis!Share to TwitterShare to FacebookShare to Pinterest

Okay...a little scare for the bulls pre-market..but we do seem to be holding here very well -whilst the cycles are resetting themselves for the next up move into next week. 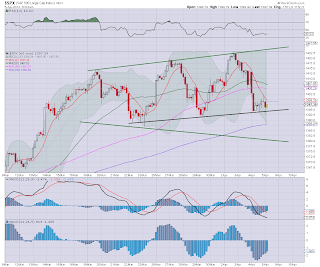 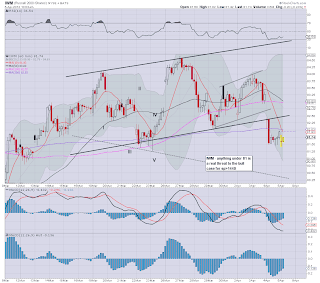 Best case - market has floored, and now we'll trundle around today - probably not too much either way, and then we await Fridays jobs data.

Best case bulls...we'll move into Monday will a significant gap upward..maybe even straight over sp'1422..which would cause a pretty serious stop reverse-cascade upward. That would easily open the door to 1440 as early as the end of next week.

Worse case for the bulls, currently would be a break lower Monday, <80 on IWM, and sp 1370s. If that is the case, then the overall bull case (sp'1550 by July - which I currently hold to) would be in critical threat..and the top may instead be in for the year.

*I remain long, and will hold across the long weekend. Coming from a Permabear, maybe that says something.

*Futures and Bond markets will be open Friday, whilst NYSE is closed.

More later in the day.
Posted by Trading Sunset at 15:11:00
Email ThisBlogThis!Share to TwitterShare to FacebookShare to Pinterest

Dollar - bouncing on the rising channel

The Dollar is suggestive of a new up-cycle . a potentially major one. 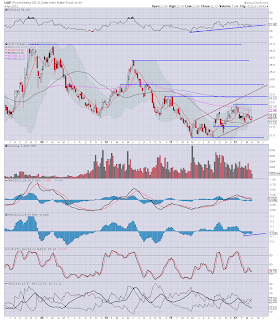 Looks pretty bullish, from a cycle point of view, we are only 1-2 weeks away from going +cycle (MACD blue bar histogram), where a major snap move higher is viable*

*The weekly VIX chart is similarly suggestive of a possible snap higher move within the next 1-3 weeks.

So, the bears have both the $ and the VIX weekly cycles on their side, but they need follow through next week!


$ Implications, if the trend continues

Bearish on all commodities, especially the precious metals - causing SLV/GLD to snap much lower
Bearish on commodity related equities, in particular, the mining sector.
General downward pressure on the main market.

Good wishes for Thursday trading    (a day we need to treat as a Friday!)

Posted by Trading Sunset at 13:00:00
Email ThisBlogThis!Share to TwitterShare to FacebookShare to Pinterest

Another rough day for the metals (those gold bugs will sure be getting mad!) 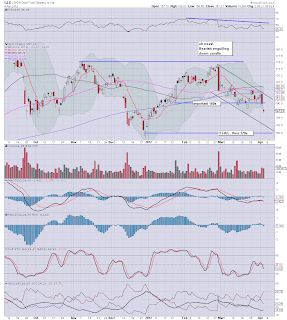 Weak weak...WEAK. There is nothing good about this chart, its headed for 150..and probably 120 later in the year. 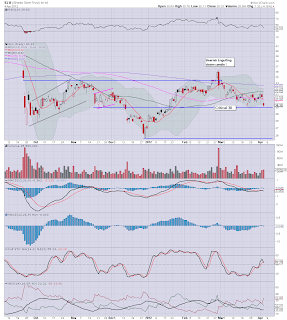 SLV close to the precipice. The key $30 level..so close to being taken out today, but it did hold!

As stated many times in the past few weeks, metals are bearish in the mid term, with targets of $1200 and $20 respectively.
Posted by Trading Sunset at 02:00:00
Email ThisBlogThis!Share to TwitterShare to FacebookShare to Pinterest
Newer Posts Older Posts Home
Subscribe to: Posts (Atom)