Whilst US equity indexes closed moderately mixed, the VIX remained relatively subdued (intra high 16.04), settling +3.4% @ 15.24. Near term outlook briefly threatens the 14/13s - as Yellen is set to appear, but a broad climb to the key 20 threshold looks due to begin. 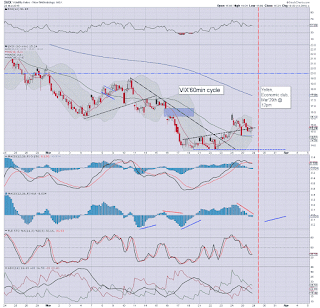 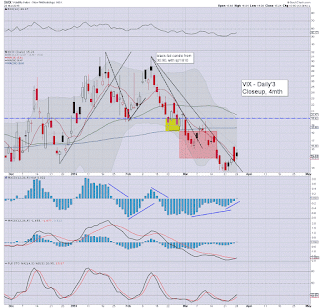 Equities are likely close/if not already maxed out, with the VIX having likely floored in the 13s.

A turn upward in volatility is due.
--

US equities closed moderately mixed, sp +1pt @ 2037. The two leaders - Trans/R2K, settled -0.8% and +0.1% respectively. Near term outlook threatens a serious attempt to clear sp'2056, but it will likely fail. With three trading days left of March/Q1.. things are about to liven up. 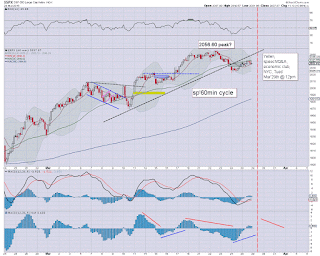 On what was a semi-holiday trading session, there is little to add.

Tomorrow will really help to wake everyone up. The Tuesday close could be rather important.
-

US equities remain in micro chop mode, and look set to remain so until the Yellen appears. As things are, the cyclical setup is far better for the bears than it was last Wed/Thursday. VIX remains broadly subdued, higher by a relatively lame 3% in the 15.20s. 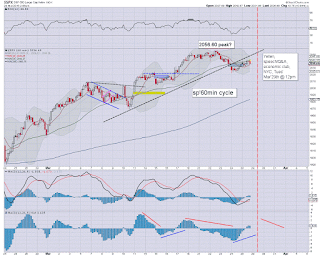 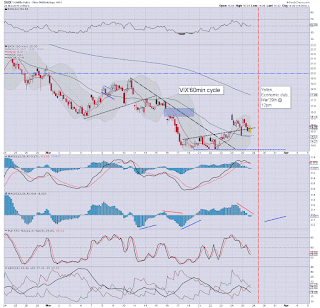 ... suffice to add, one of those days when I question myself for appearing today.

At least tomorrow.. and the rest of the week will wake everyone up.. one way or another.

back at the close.......
Posted by Trading Sunset at 19:57:00
Email ThisBlogThis!Share to TwitterShare to FacebookShare to Pinterest

Whilst the broader market remains in moderate holiday chop mode, there is notable strength in the corporate giant of General Electric (GE), which has seen a decisive break above the late Dec'2015 high. If GE is a pre-cursor to the broader market, the bears are not going to be able to reverse things. 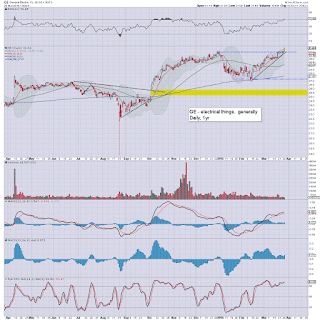 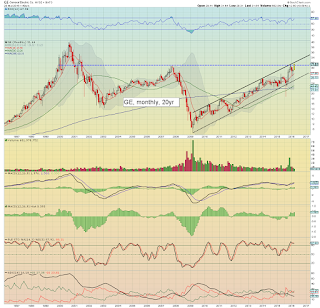 Yes, its just one stock, but today's gains can't be ignored.
-

notable weakness, TVIX, lower by around -4% at the $5.00 threshold (not that such a threshold means very much for a leveraged instrument).
--

back at 3pm.......
Posted by Trading Sunset at 18:51:00
Email ThisBlogThis!Share to TwitterShare to FacebookShare to Pinterest

US equities remain in chop mode, but clearly, still leaning on the upward side. With the sp +4pts @ 2040, the recent high of 2056 is indeed very close.... yet even with some bold talk from the Yellen, a new cycle high looks difficult. Metals are broadly flat, whilst Oil is -0.8%. 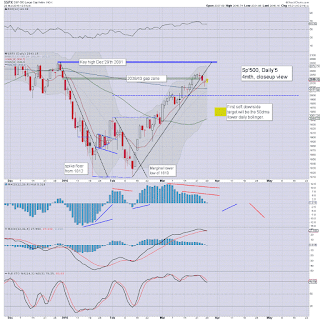 Even the most bearish of bears should recognise a sustained move <1950 in any initial down wave into April looks out of range. 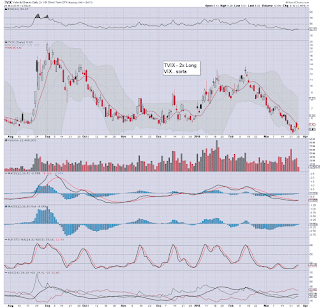 .. I really should cook. Hmm
Posted by Trading Sunset at 17:53:00
Email ThisBlogThis!Share to TwitterShare to FacebookShare to Pinterest

12pm update - sold to someone

US equities remain in micro chop mode. What should be clear, equity bears still lack any downside power, whilst the bulls are arguably exhausted from last weeks high of sp'2056. VIX broke to 16.04 in early trading, but the 14s.. even 13s look viable with the Yellen tomorrow. 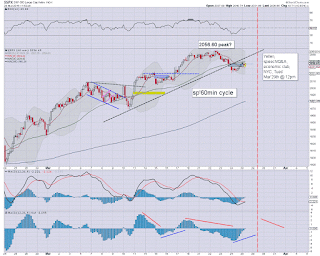 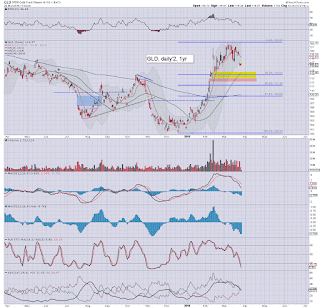 re: Gold, remains increasingly weak. Mr Market would probably like to wash the $1200 long-stops out, before the next move to the $1300 threshold. Note the current black-fail daily candle, it does not bode well for tomorrow.
-

Little to add, on what is a naturally subdued day.

Things will unquestionably liven up tomorrow lunch time, as Yellen will be get blanket coverage on clown finance TV. 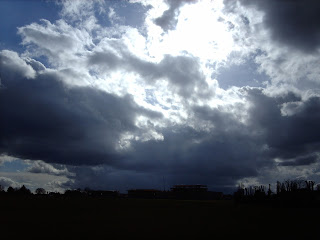 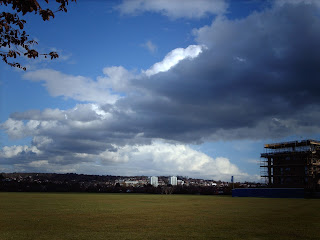 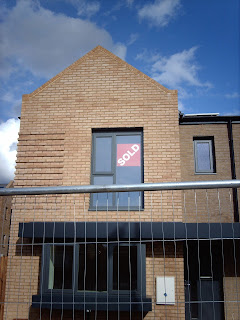 In one of the many property developements in the city, most homes are still being sold well before the associated new roads are even finished. Outside the city - in most surrounding dormitory towns, its not much different either. Chronic shortages... not least partly due to the legal (and otherwise) immigrants buying.

Yes, the 'super high end' in the core of the city has cooled, but the mid/low tier remains very strong.

Anyone on even an average income (London: $50,000 or so) have become priced out of the city. Its not a good situation.. unless you're already an owner.

time to cook
Posted by Trading Sunset at 16:53:00
Email ThisBlogThis!Share to TwitterShare to FacebookShare to Pinterest

US equities remain moderately choppy, in what is still holiday trading mode. Price structure on the hourly chart is offering a bear flag, suggestive of weakness into the Yellen event. Meanwhile, metals are a little higher after overnight declines, Gold +$3, with Silver +0.5%. 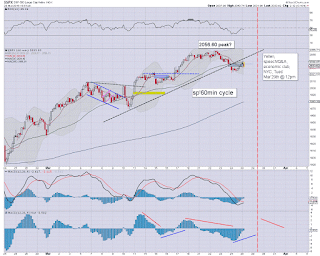 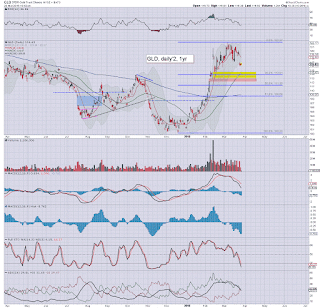 re: Gold. Further downside to the GLD 114s still seems probable, not least as we saw 115s overnight.

As for tedious... why is anyone even watching today? Almost all of the EU is shut, and there simply isn't anything to sway the broader market.

notable weakness, FCX -2%... struggling around the 200dma.
Posted by Trading Sunset at 15:53:00
Email ThisBlogThis!Share to TwitterShare to FacebookShare to Pinterest

US equities open a little higher, but the gains are clearly a little shaky, with some indexes already fractionally red. However, the equity bears can't overly excited about any pre-Yellen downside. The hourly cycle is still highly suggestive of the market holding together into late Tuesday morning. 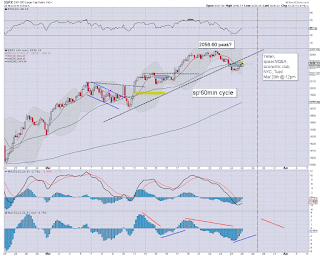 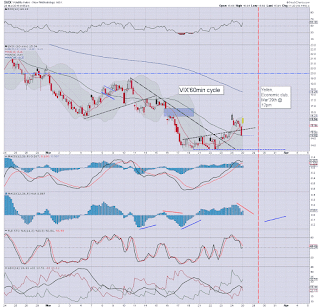 *price structure on the hourly equity chart is a clear bear flag, but I don't much like it.. not least as we're still effectively in holiday trading mode.
--

Little to add, on what will be a subdued day of moderate chop... with underlying price action still leaning to the upside.

A new cycle high >2056 looks very difficult, as increasingly, many are looking to sell within the sp'2040/55 zone. 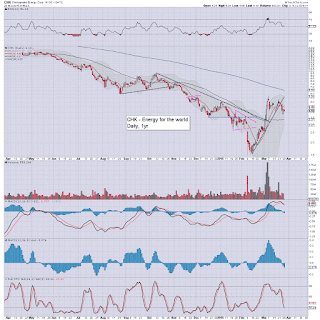 Not surprisingly, with just a touch of main market weakness, the junk stocks are already significantly lower. I guess you could argue CHK is sporting a large bull flag, but fundamentally, the company looks set to disappear.
-

stay awake.. if you can.
Posted by Trading Sunset at 14:57:00
Email ThisBlogThis!Share to TwitterShare to FacebookShare to Pinterest 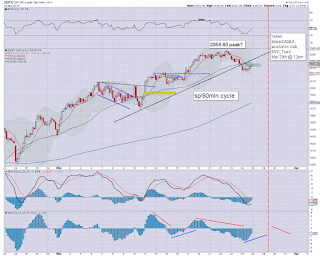 It would seem today will be pretty subdued - to be expected on what is Easter Monday, but leaning on the upside.

The key issue is whether we can break last weeks high of sp'2056. That sure won't be easy, even if Yellen 'inspires' tomorrow lunch time.

Indeed, things get real interesting from 11am-1pm tomorrow, if we haven't broken >2056.

By month end/Thursday... its viable we could settle near the 2K threshold - even if we're 2045/55 tomorrow morning.

Have a good Monday
Posted by Trading Sunset at 13:05:00
Email ThisBlogThis!Share to TwitterShare to FacebookShare to Pinterest
Newer Posts Older Posts Home
Subscribe to: Posts (Atom)