...and the Wheel spins up for another week

Well the futures wheel of fortune has spun up, we're 5mins in and the SP equivalent ES is -3.5pts. Not exactly free fall, but neither is it +10pts for no good reason. Bears have everything set for a bearish week ahead. All the cycles are primed for some dynamic moves to the downside. 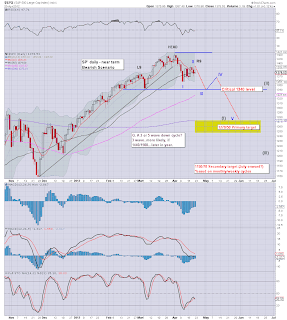 Futures are highly unreliable, so we could still open higher -although I'm guessing we won't.

Bear targets
- need to see VIX break into the 19s..and then 20. If 20 can be hit, it should offer yet another chance to break the recent 21 high, and then hit 24 later in the week.
- if market can break lower to around 1365 or so, that would break and confirm the bear flag on the daily cycle, and should lead to 1340/25 in the very near term.

Good wishes for Monday trading.
Posted by Trading Sunset at 23:11:00
Email ThisBlogThis!Share to TwitterShare to FacebookShare to Pinterest

With over 2 hours until the futures wheel spins up, lets have a quick look at the dollar.


Daily cycle is certainly not bullish yet, although the range in price is getting tighter and tighter, kinda feels like its getting wound up, before a big move. 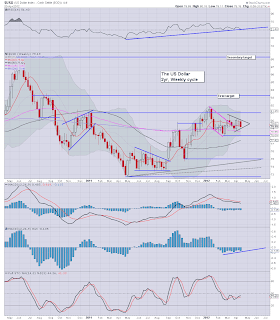 Weekly is arguably bullish, and we have a potential baby bullish pennant that is due to break one way..or the other, real soon. From a MACD cycle perspective, we are very much more likely to break higher than lower, first major target would be DXY'83 level. A break under 78' would certainly be very bearish, and would likely help commodities - and the wider equity market to have a further wave higher. 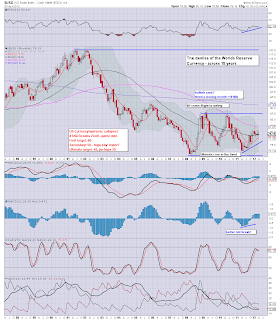 A rare appearance from this chart. Without question the dollar continues to weaken across the years and decades. Since the US Federal reserve appeared some 99 years ago, its lost around 97/98% of its purchasing power. Good work Fed!

The MACD cycle on the monthly has been flat for 3 months now, and for those doomer bears looking for lower commodity/equity prices, this IS a real problem. If the dollar begins a significant new wave lower - and can break the ascending trend line (blue) - currently 76', then we may be seeing something really serious beginning in the currency world. A break below 70....and its all over. We are a good 10% from that critical level though, so...no need to be too concerned about that..yet.


The Dollar, the cleanest of the dirty paper out there?

So, in the near term, maybe as far out as a year or two, the dollar is arguably the 'better' of the paper. However, only a move above DXY'90/92 would get me bullish on the dollar. I have seen a few chartists and economists over the last few years tout DXY'100, some even higher. Regardless, the long term decline in purchasing power of paper money is assured whilst we have both fractional banking and periodic bouts of QE.

That reminds me of Gold and Silver...but that's for another place :)

yours...
awaiting the wheel at 5pm'EST

Posted by Trading Sunset at 20:56:00
Email ThisBlogThis!Share to TwitterShare to FacebookShare to Pinterest

Take your pick, from five of infinity

The monthly index cycles are showing the first real turn lower since last October. There are of course infinite possibilities, but lets consider five of the main ones. 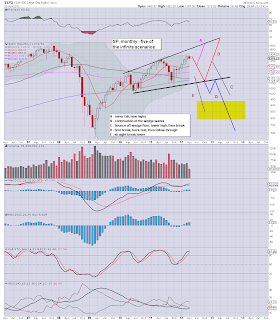 Without question, the weekly and daily charts are highly supportive of a near term pullback, at least to 1340, if not 1300. However, the real question remains, what then?

A - a near term pullback to 1340/00, then a significant wave up to new post-2009 highs, either 1430/40...or if broken over..probably 1550.
B - a further move to the base of the huge giant broadening wedge, 1100/1150 by around October, before a further huge up cycle - 'inspired' by QE3 ?
C - a bounce off the lower wedge floor, before a lower high, and a further major break lower in 2013
D - Assumes the wedge is taken out in the next wave, with a backtest more likely in early 2013, before significant carnage across much of 2013 - a highly deflationary outlook
E- Assumes an economic 'shock' + overall deflationary pressures, the 'straight down into hell' scenario.


Not just an academic curiosity

I can understand some suggesting such considerations are pointless or mere academic curiosities, but, I would argue even the short term traders should be keeping such things in mind. The coming days and weeks will probably be critical in where we trend for the rest of this year.

We have seen significant pullbacks beginning around this time both last year and of course in 2010. The central banks have managed what many thought unthinkable, kicking this stinky can along the dirt road over and over again. The system is largely a CONfidence game of course, and if the masses ever do awaken to the reality, then scenario E could become the scary reality. Although, lower stock prices are not exactly the prime concern for many these days.


So...which one did you choose?

For the record, my 'best guess' right now, is scenario B, where I believe the Bernanke will initiate QE3 after the indexes have hit 1150/00. Most interesting at that point, will be the reaction in the precious metals market. Both Gold and Silver are arguably under-valued by a factor of 3 (or 15x if you consider monetary base since 1980), without any doubt, we are going to see both explode to the upside at some point.

I'll certainly be returning to this chart in the months to come.