With equities slowly unravelling across the day, the VIX built sig' gains, settling higher by 11.4% @ 14.31. Near term outlook offers further equity weakness into the Friday jobs data, before the broader trend is likely to reassert itself. 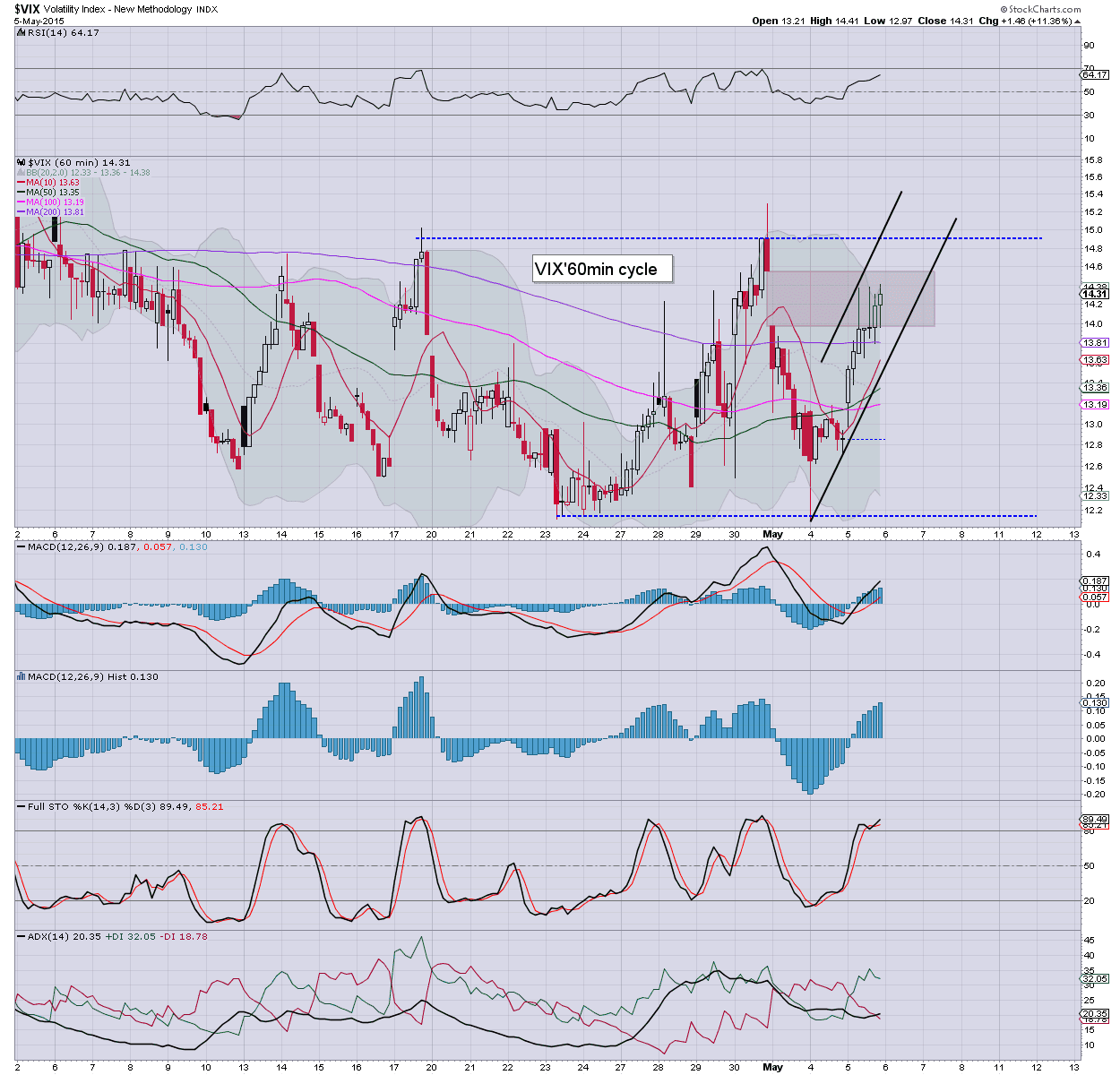 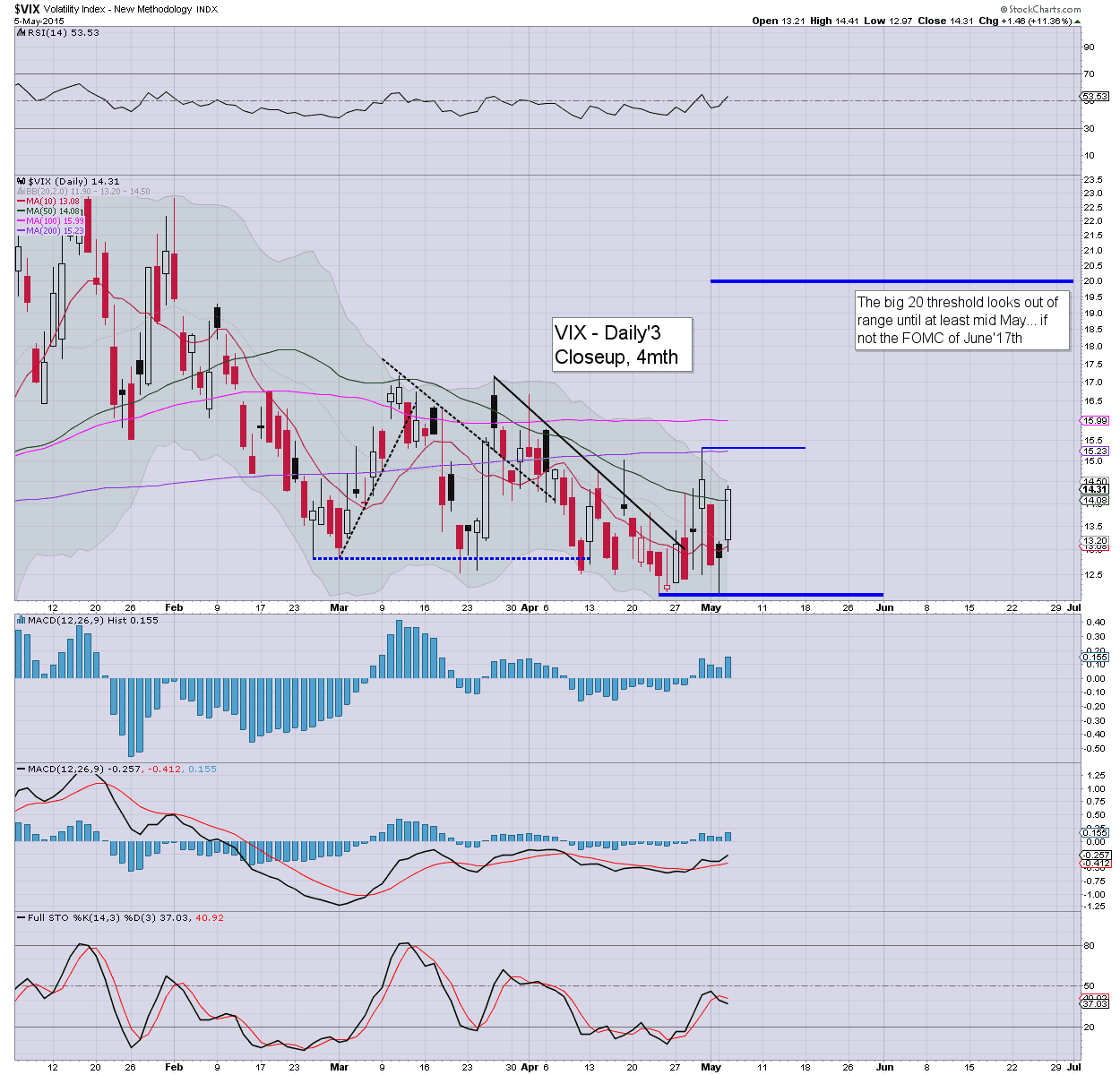 A second consecutive net daily gain for the VIX, although of course, the 14s remains a bizarrely low VIX.

The big 20 threshold looks out of range in the current up cycle. 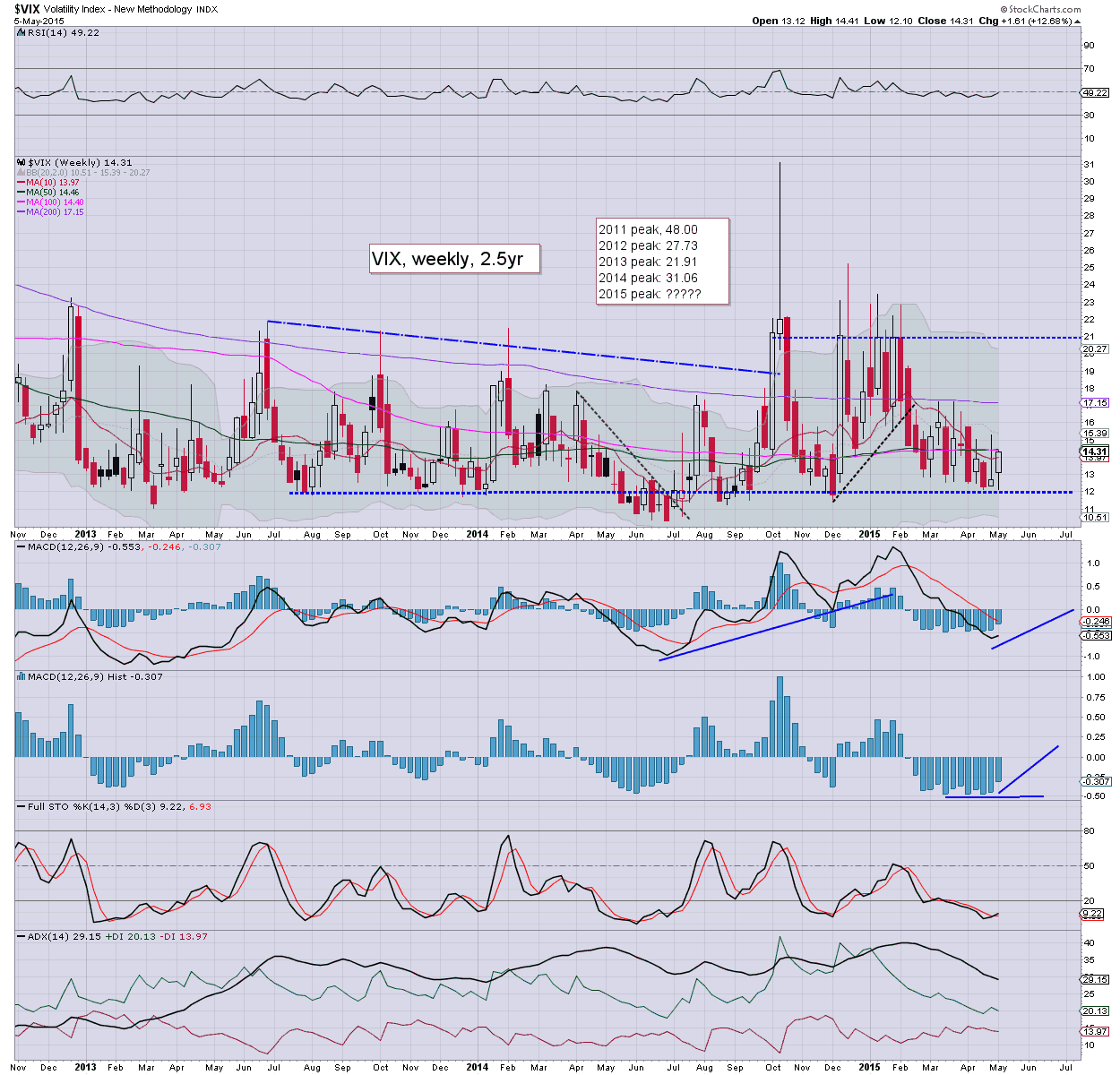 Underlying MACD cycle is starting to tick higher, and at the current rate will turn positive in 2-3 weeks. For the equity bears... this is something to keep in mind for the latter half of May.
- 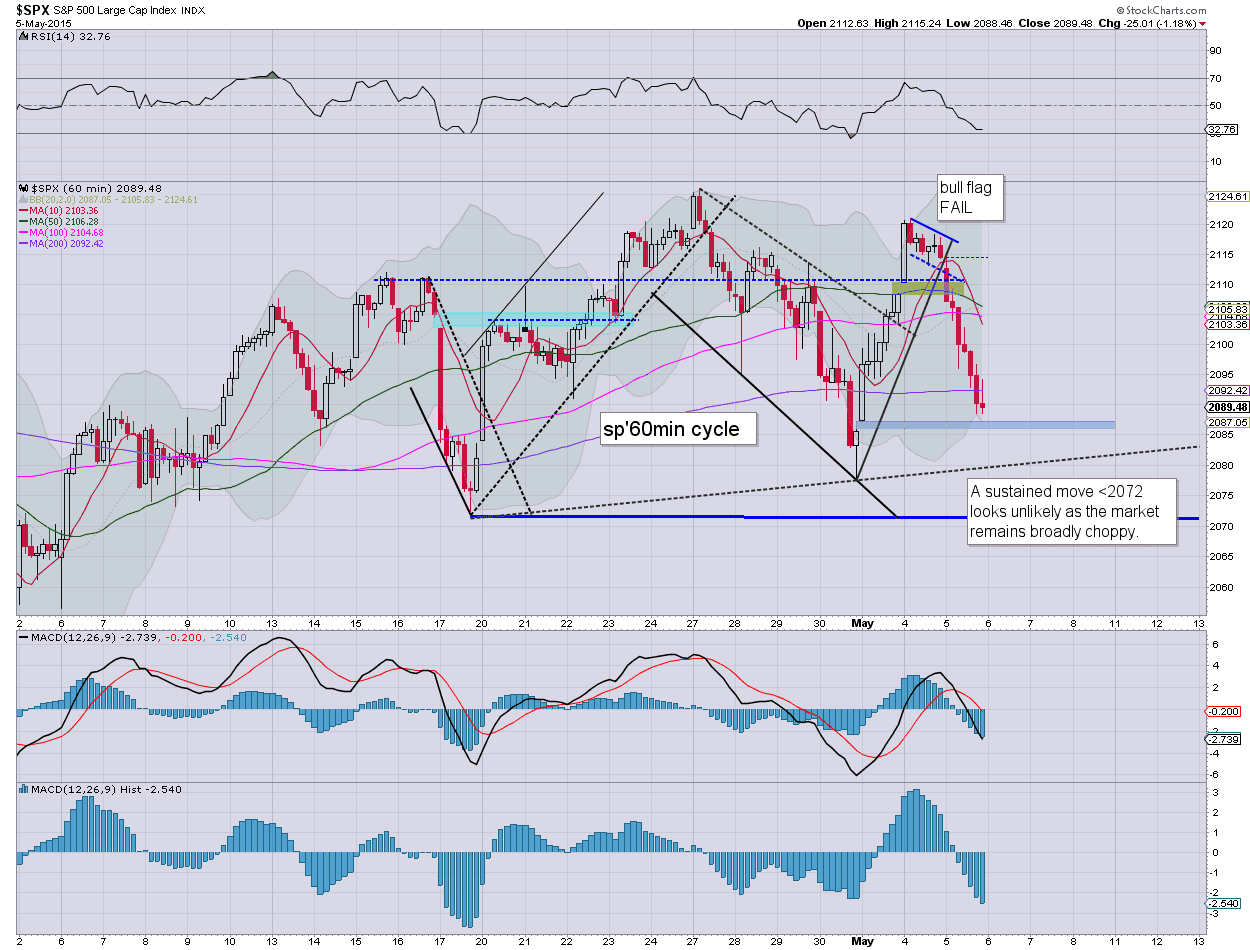 The mainstream is claiming that the market sold lower on the intl. trade data (since when did anyone care about that?) - which saw a wider than expected deficit of $51bn... but really, I think that is just a case of mis-attribution.

A bigger move <2072 in the near term looks really difficult to achieve.
--

US equities continue to slowly, but consistently unravel, with the sp' lower by a significant -25pts, at 2088. A daily close in the 2090/85 zone - where there are a number of aspects of support, seems probable. Metals are holding moderate gains, Gold +$4. Oil is set to close higher by a sig' 2.5% 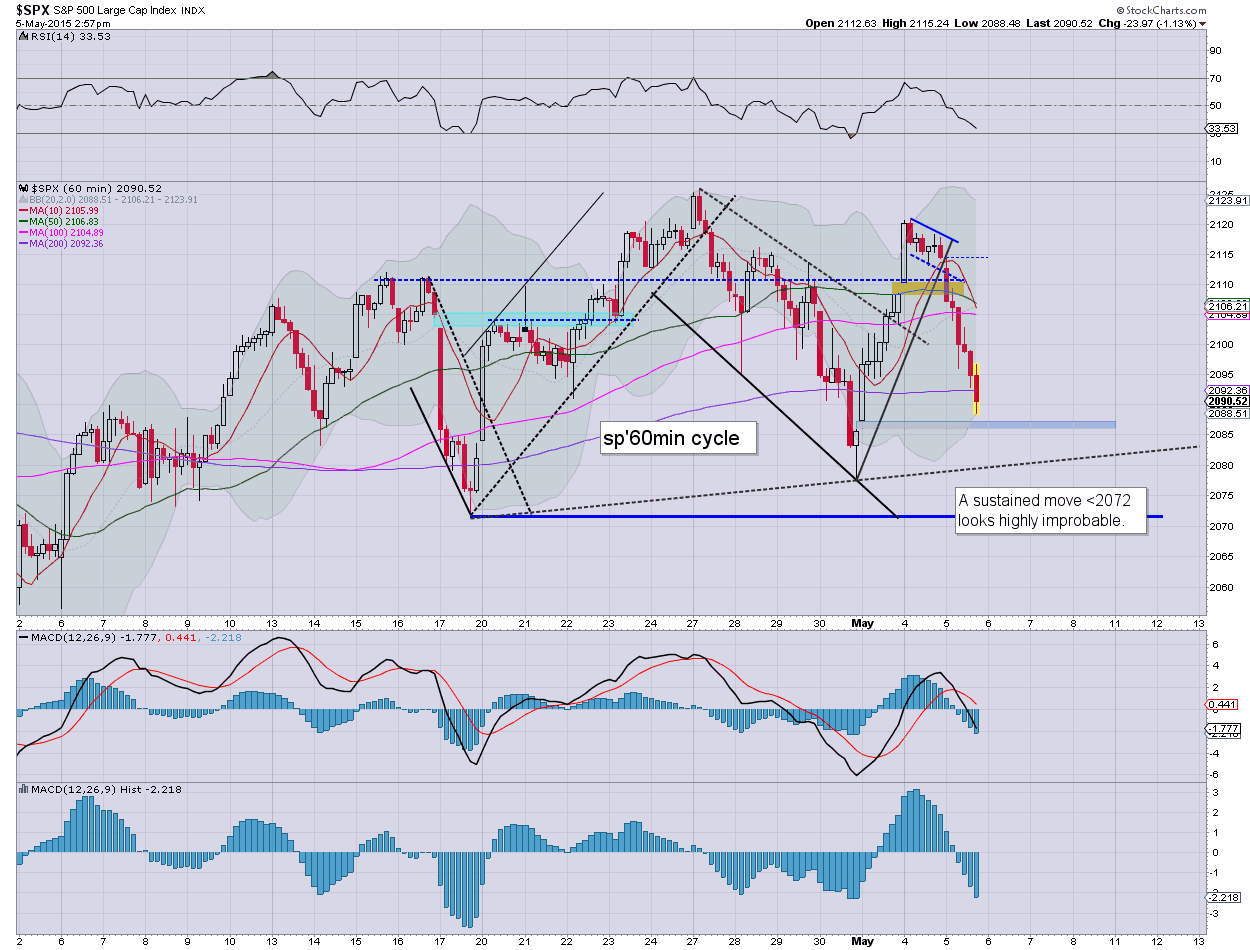 I'm a little surprised we already reached the 2090/85 zone.. which seemed more likely tomorrow than today.

--
*I continue to watch the Gold... but will hold off for today... another gap higher looks viable tomorrow. 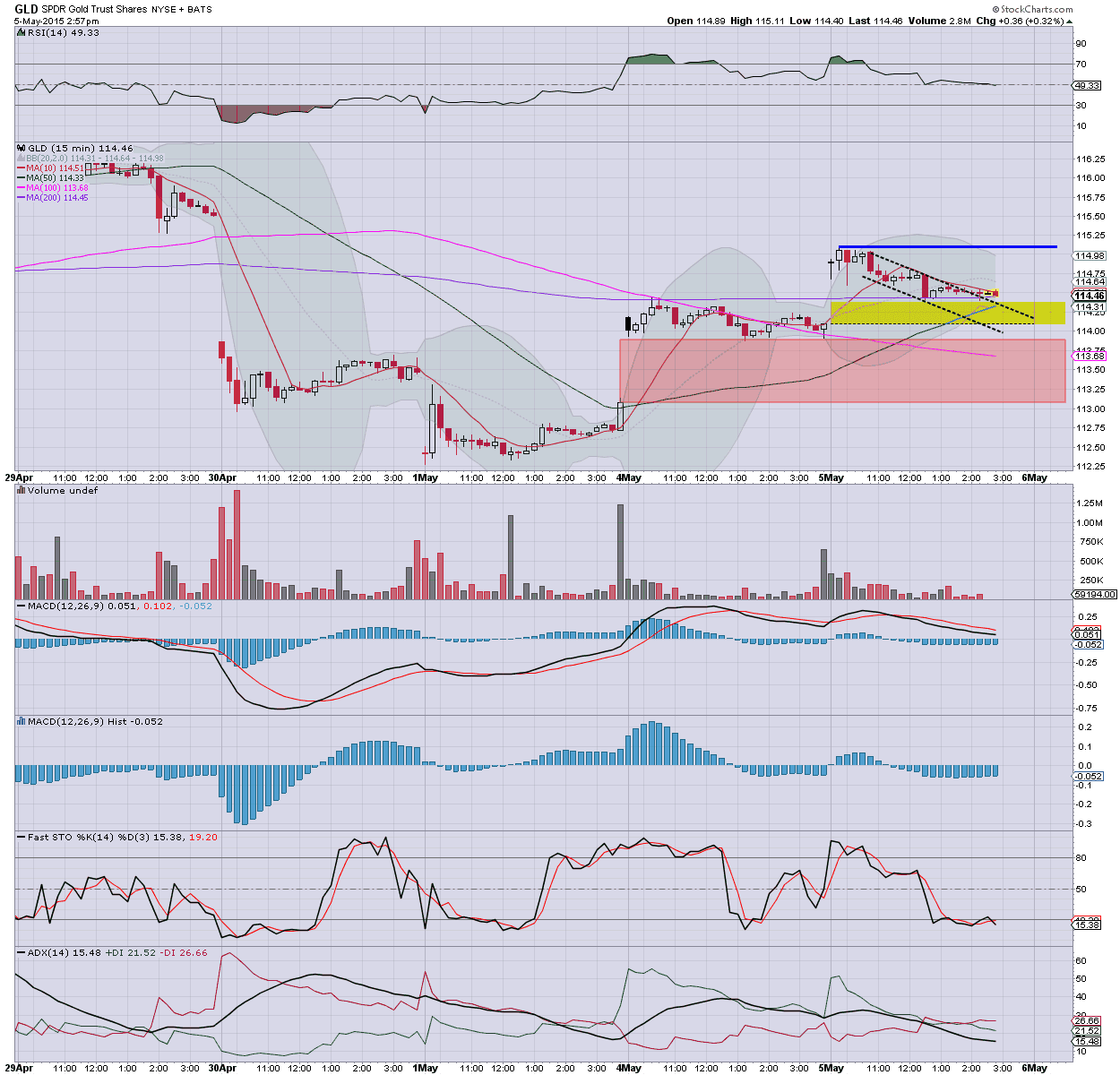 notable weakness: DISCA -1.6%... after good earnings... but market still not happy as there are 'strong dollar' issues with this intl. company.
Posted by Trading Sunset at 19:59:00
Email ThisBlogThis!Share to TwitterShare to FacebookShare to Pinterest

US equities are increasingly weak, with significant declines for some indexes, notably the R2K and Nasdaq comp', both lower by around -1.5%. Precious metals are holding moderate gains, Gold +$4, but price structure is a very bearish wedge. Oil is holding sig' gains of 2.9%. 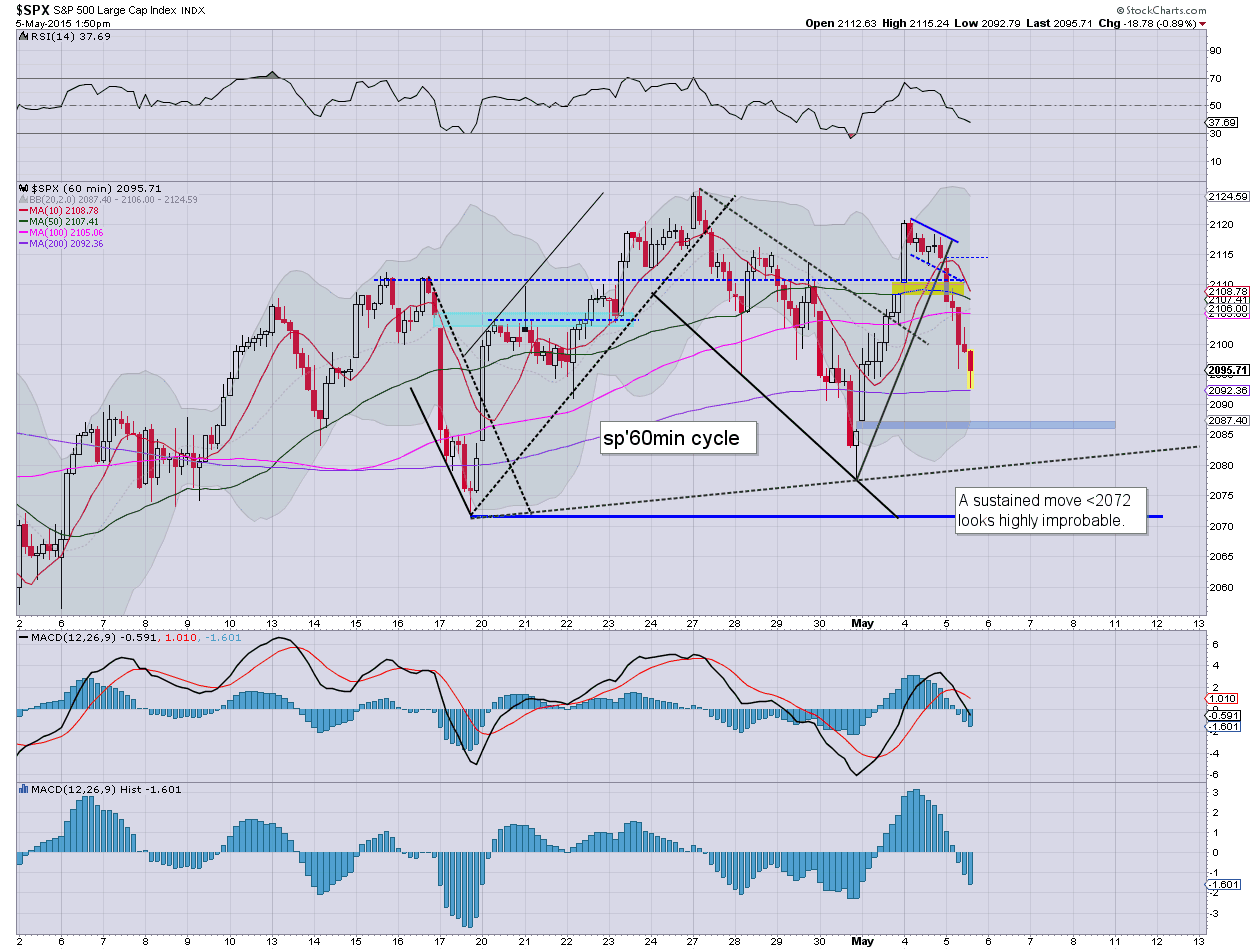 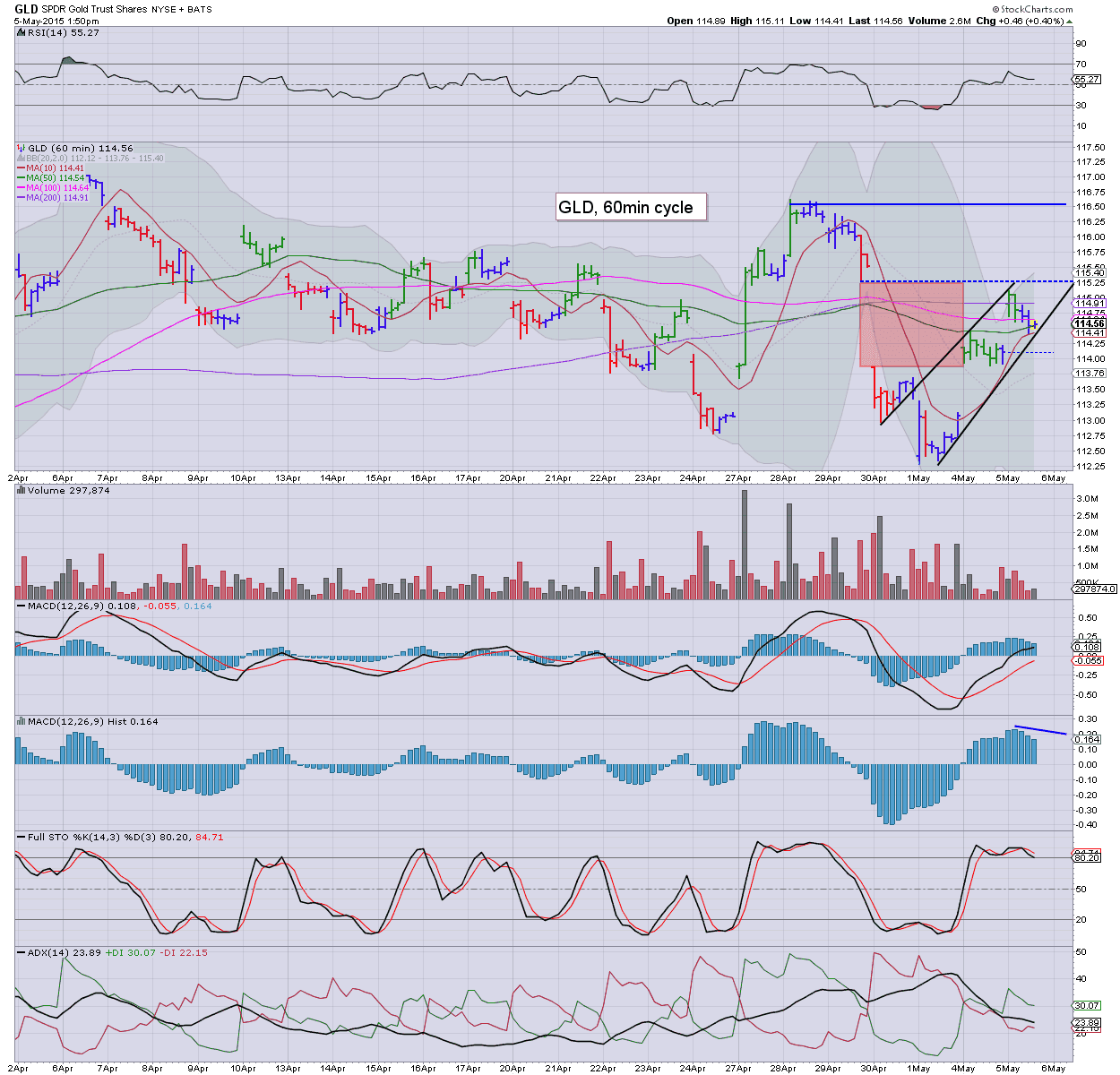 *The metals remain broadly weak, and I'm considering shorting Gold via GLD. For now... its 'interesting' to consider viable downside into the Friday close.
--

It looks like we'll close somewhere in the sp'2090/85 zone.. ahead of the ADP jobs report.

As ever, VIX is without question still generally subdued.. stuck in the lowly 14s. I can't take VIX seriously until it can break/hold the low 20s.. and right now that looks highly unlikely in the near term.

-
notable weakness: FXI (long China) -3.6%.. as market is pricing in another overnight decline.

-
*it is notable that Oil faces the next set of inventory reports, with API some time after the close.
Posted by Trading Sunset at 18:55:00
Email ThisBlogThis!Share to TwitterShare to FacebookShare to Pinterest

US equities remain moderately weak, and for once... a latter day recovery looks increasingly unlikely. Next downside target is the sp'2090/85 zone... and is certainly viable tomorrow morning. Metals are cooling from earlier gains, Gold +$4. Oil is holding sig' gains of 3.1%. 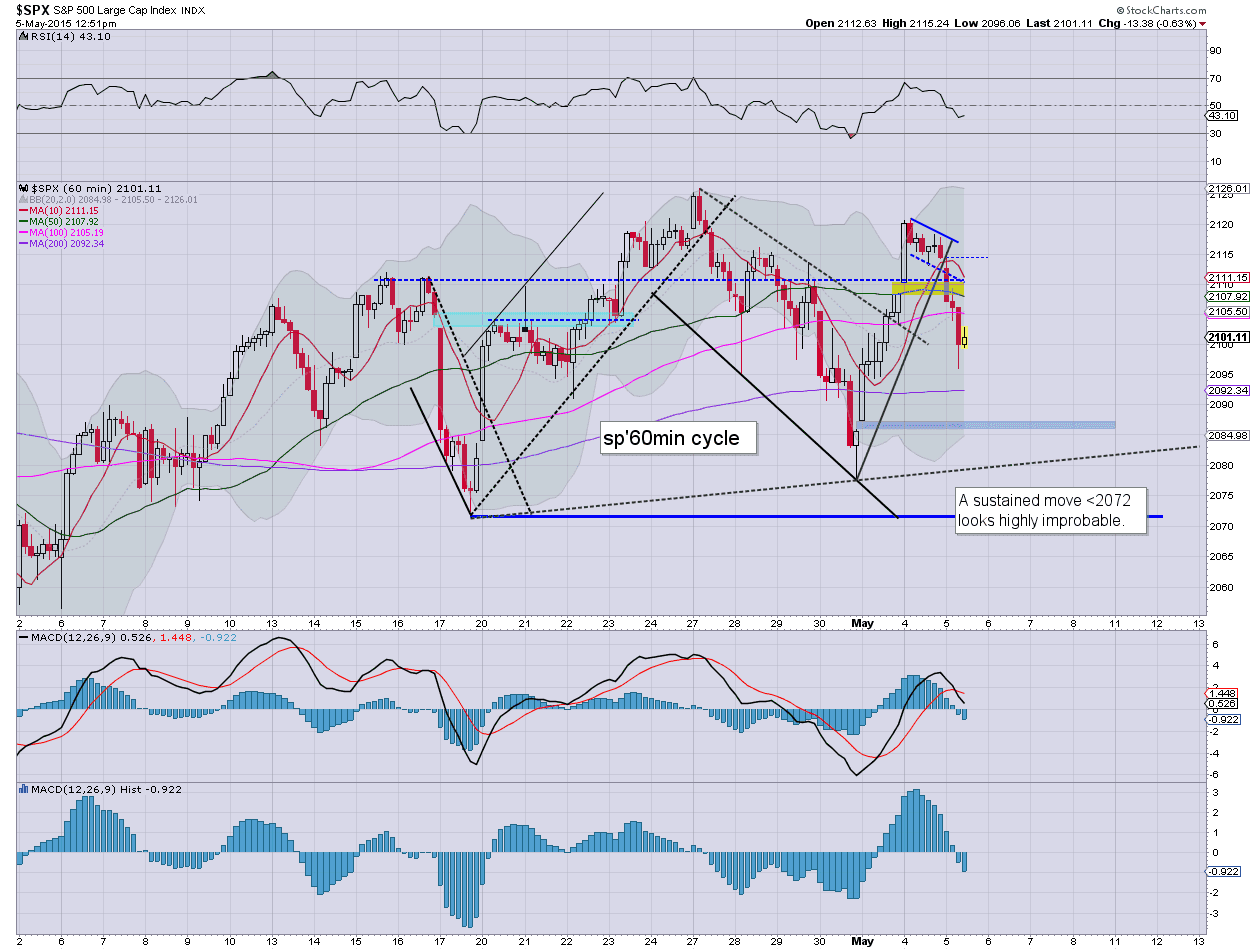 Underlying MACD (blue bar histogram) on the hourly equity cycle is now negative.. and looks headed lower into tomorrow.. and probably Thursday too.

Things really only get 'marginally interesting', on sustained action under 2072.. but right now, that looks out of range, even if the market doesn't like the Friday jobs data. 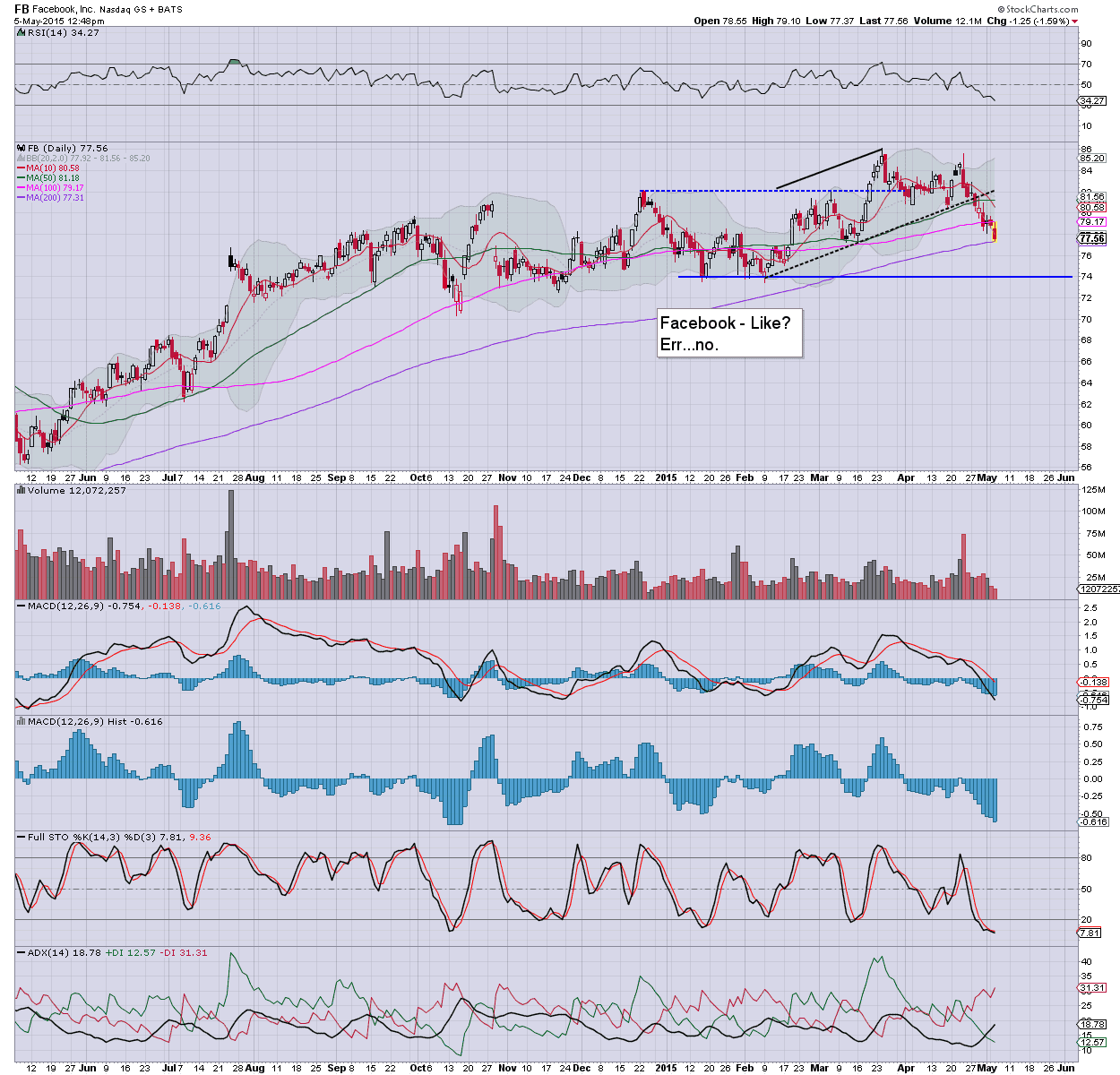 Next support is around $74... and that sure won't help TWTR.. which is increasingly subdued...melting toward the Dec' low of $34s.
Posted by Trading Sunset at 17:53:00
Email ThisBlogThis!Share to TwitterShare to FacebookShare to Pinterest 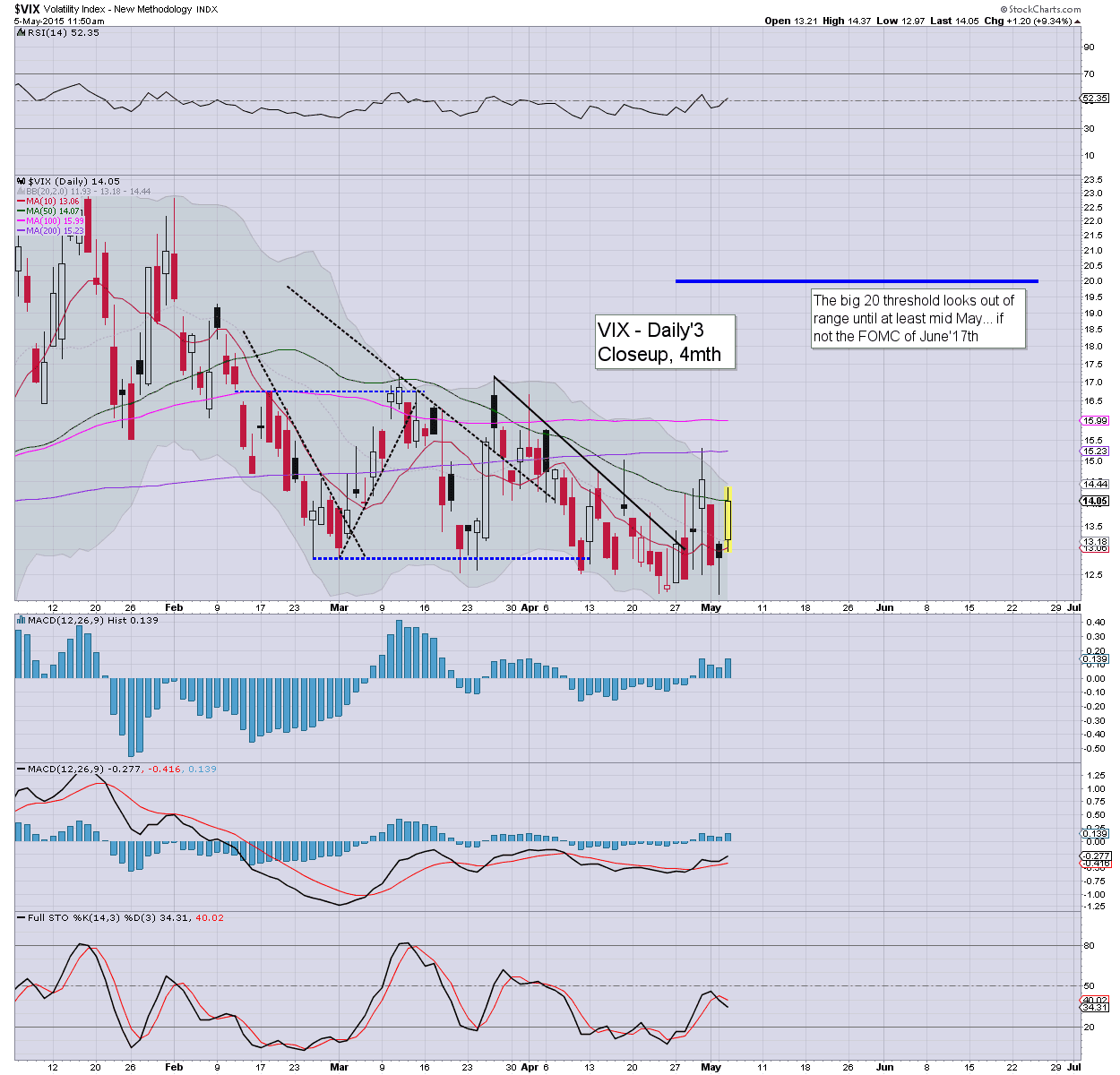 *VIX is naturally stuck at the upper gap zone resistance.. it will be difficult to break/hold much above 15/16. The bigger weekly cycle is threatening a major problem in about 2-3 weeks.. but for now.. its still trapped within a narrow range.
--

So... we're on the slide, but as ever.. the declines are not significant. It would seem the market wants to fall into the Friday jobs data.. and then climb after.
-

airlines, DAL/UAL, both lower by around -2.5% as Oil prices rise.


--
time to cook
Posted by Trading Sunset at 16:56:00
Email ThisBlogThis!Share to TwitterShare to FacebookShare to Pinterest

Equities are seeing some moderate weakness, with the Monday baby bull flag having failed. Mr Market is offering the threat of continued downside to sp'2090/85 zone, where there are multiple aspects of support. Metals are holding gains, Gold +$8. WTIC Oil is holding the $60 threshold, +3.1%. 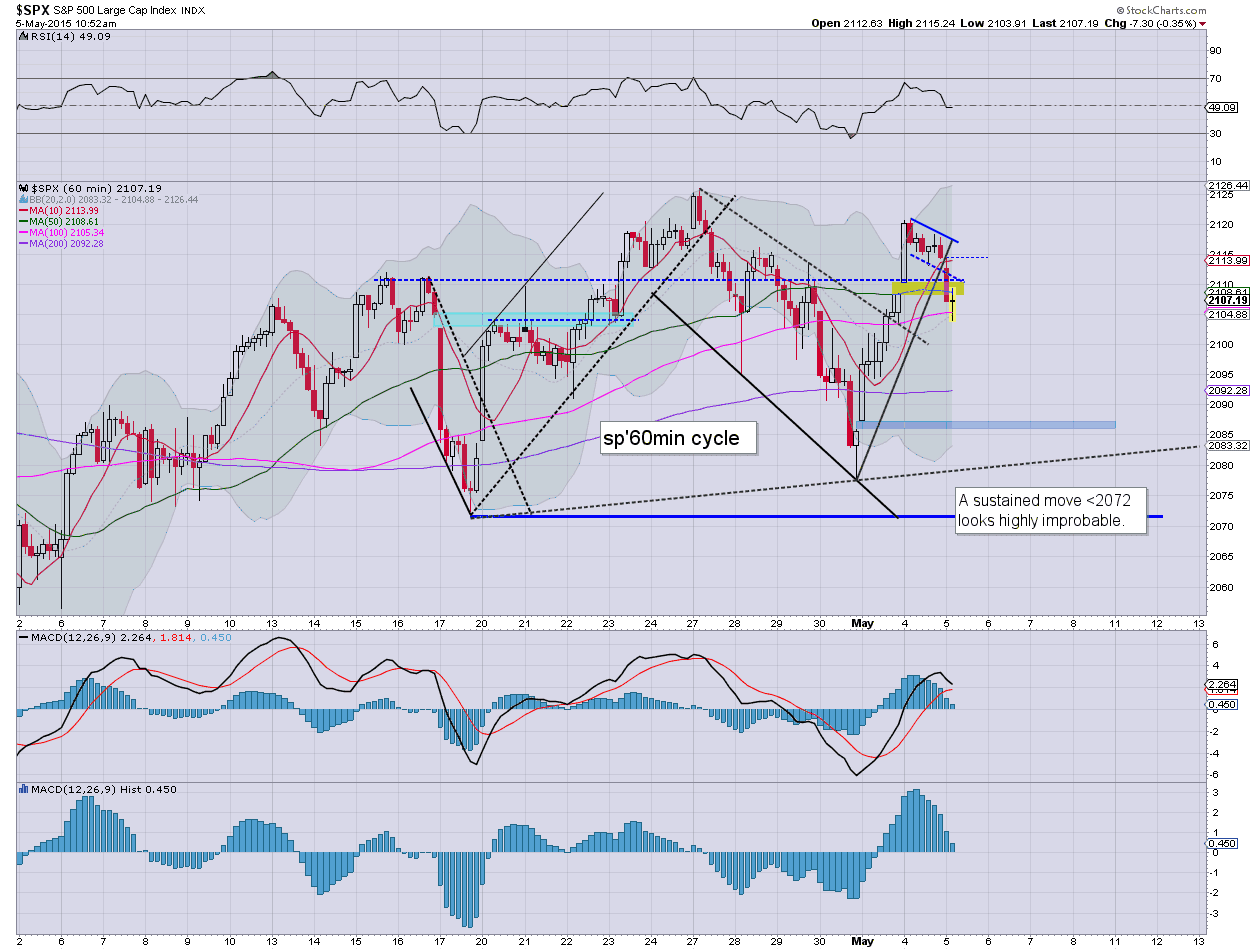 *as I will continue to note.. broader trend remains bullish... but hey... I realise some will be getting overly excited at this morning's weakness.
--

So.. moderate declines, but really, its the same old nonsense. Companies will be buying their own stock this morning.. as they did yesterday.. and as they'll do tomorrow.

-
Meanwhile.. BABA continues to unravel.. already breaking into the $77s. 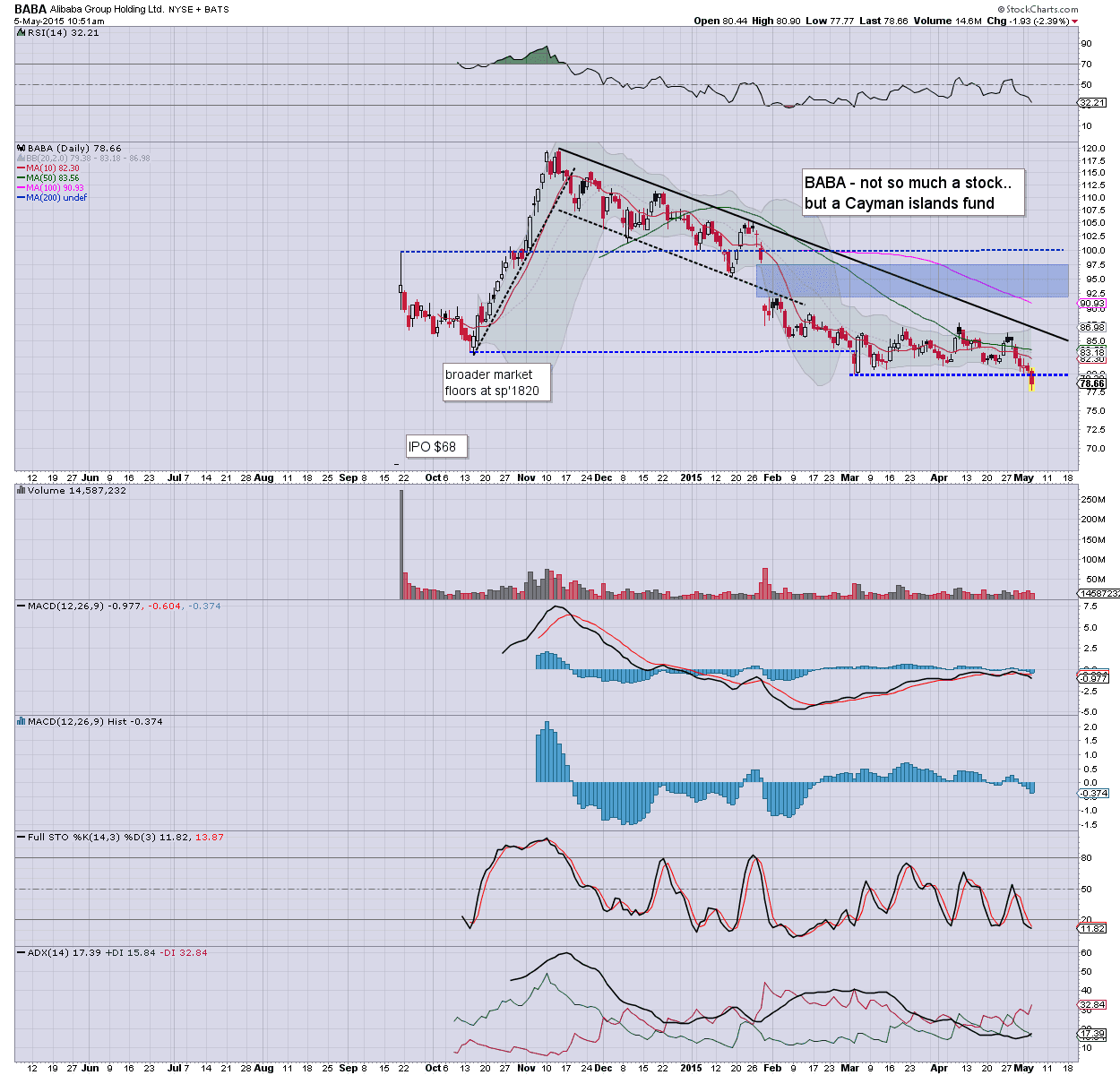 No doubt the mainstream will give BABA a lot of coverage this Thursday (for earnings)... but by then.. the stock could be as low as 70/68... right back to the IPO level.

Weakness into the jobs report.. and then ramp after.... probably.

10am update - BABA in big trouble

Whilst the broader market is seeing some minor weak chop, there is notable weakness in Alibaba (BABA), which has lost the critical $80 threshold. With earnings due early Thursday, from a pure chart perspective, outlook is now seriously bearish to 70/68. 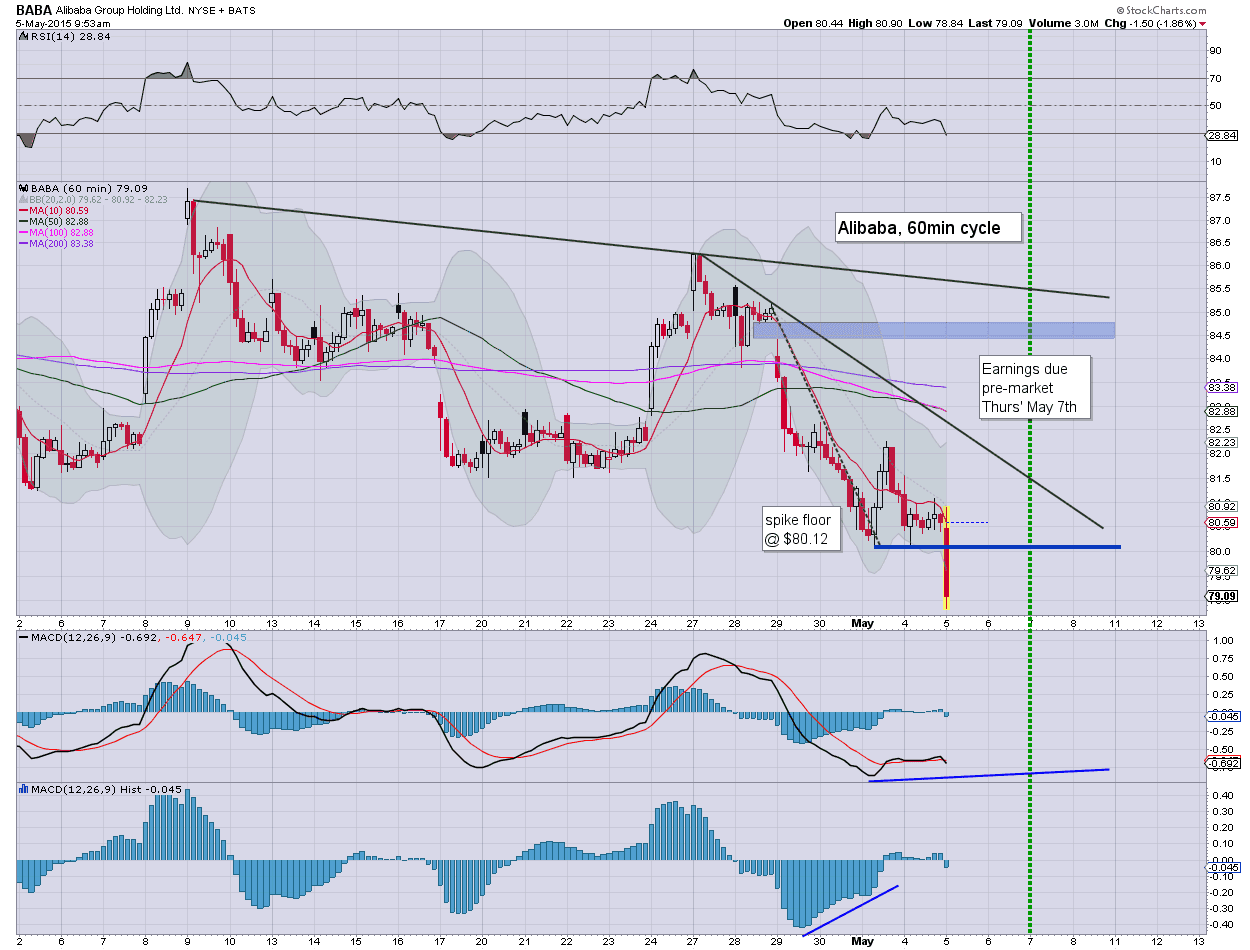 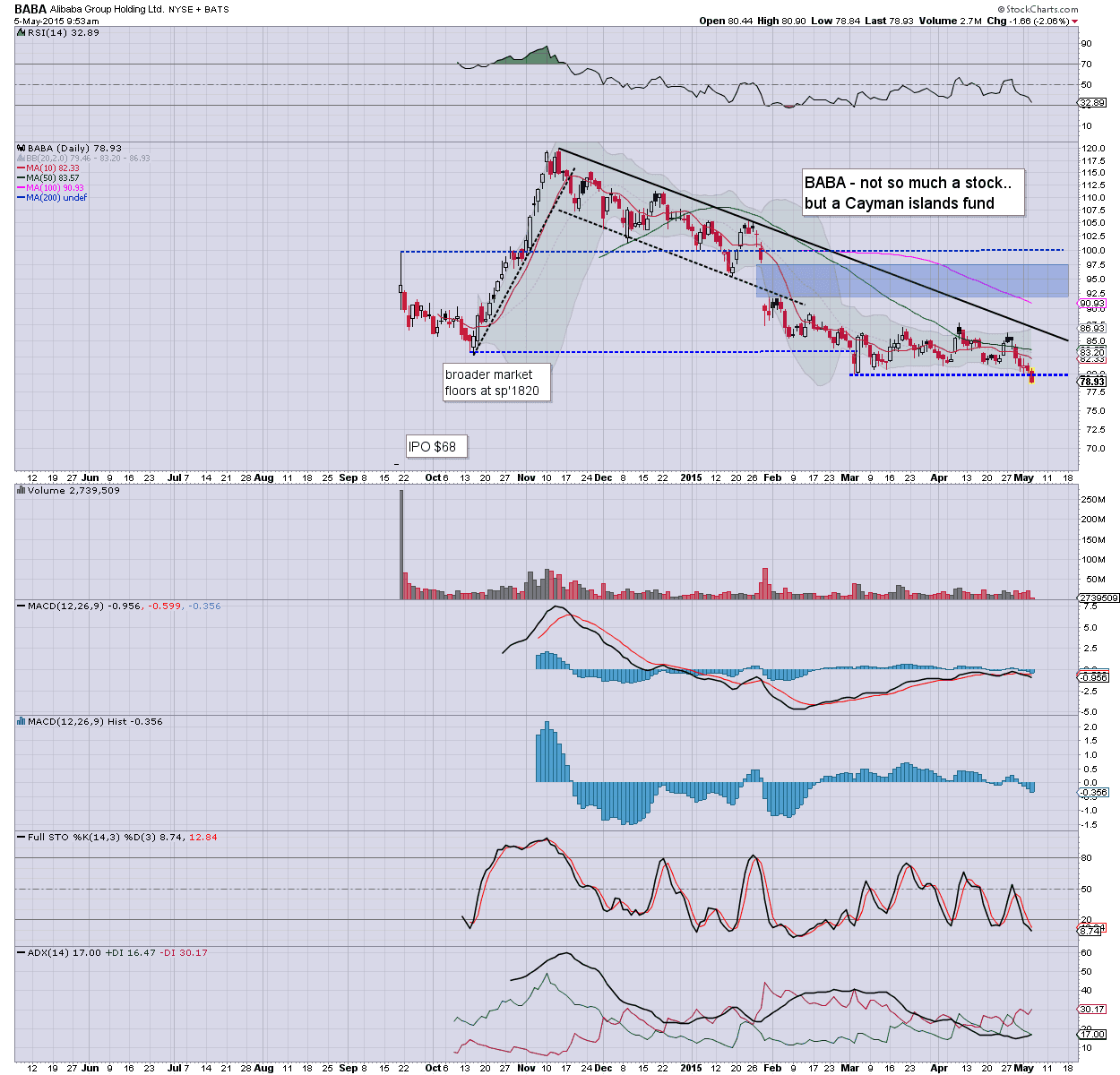 *I've no position in BABA, was considering it, but with the loss of $80, it is completely off the viable long-list.
--

So.. main market is seeing some chop... and frankly, at least there is some interesting action in individual companies...

stay tuned... on what is a pretty dynamic morning....


10.02am.. ISM/PMI service sector data both come in pretty okay... certainly nothing for the macro econ-bears to get excited about in terms of Q2 GDP. 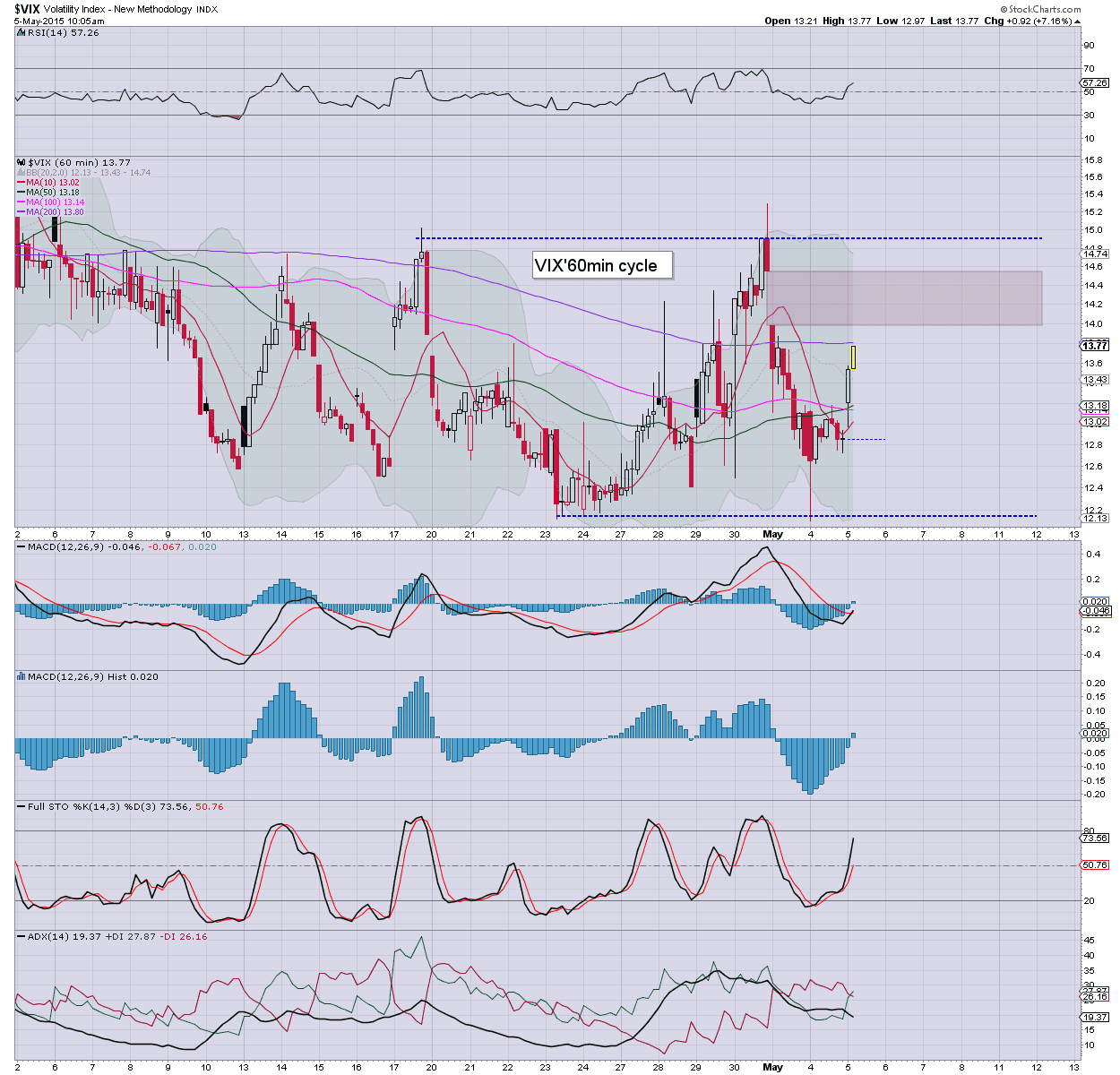 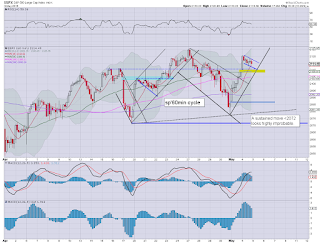 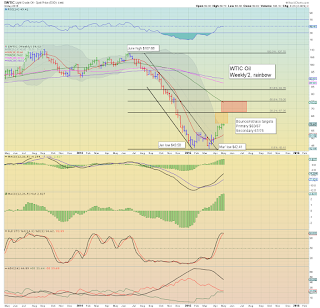 Market looks set to battle higher, again, we're now setting up for 'will good news be good news' this Friday.  Weekly cycles are offering the sp'2140s in the near term.

Update from a typically loud Oscar


--
Have a good Tuesday.
Posted by Trading Sunset at 13:13:00
Email ThisBlogThis!Share to TwitterShare to FacebookShare to Pinterest

One last push for Bonds

US bonds started the week on a negative note, with the widely recognised bond fund of TLT settling lower by -0.9% @ $122.83. Next support is the March low of $122.46.. if that fails to hold, then TLT will be headed for 117.  However, price structure is arguably a bullish pennant.. offering new highs in the 140s by late summer. 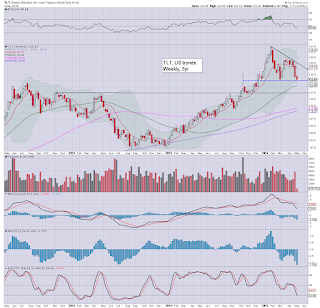 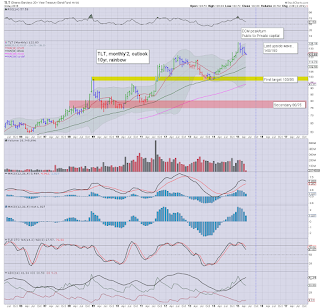 *I rarely comment/highlight bonds.. but increasingly intend to, as we proceed into the summer/autumn.
--

My broad outlook is for one last multi-month up cycle for bonds.

The weekly cycle is offering a double floor in the 123/22s. It will be important to recognise if this level fails to hold... more viable after the next jobs data.

The giant monthly cycle is offering a large bull flag/pennant, with the 140/50s viable by Aug/Oct time frame.
-

**I've never actually traded TLT, but will be seeking to short US bonds later this summer/early autumn... preferably in the 140/150 zone. First downside target would be the 100/95 zone.
--

Many are still dismissive that the fed will be willing (never mind able) to raise rates EVER again. Personally, from late last year I had expected a rate rise between March/June.. but am now resigned to it happening no earlier than Sept.

There is the grander issue of a Public to private capital shift  - as Armstrong regularly speaks about, but for now, I'll leave it at that.
--


The 'old leader' is merely consolidating

If you can agree that the Transports is indeed still the 'old leader' (after all, everything has to be transported at some point)... then the current price structure should really concern the equity doomer bears. 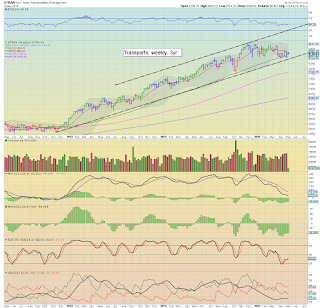 Whilst the underlying MACD cycle has almost fully reset back to levels last seen in late 2012, prices are only a little lower than the high of 9310 (Nov' 2014).

Frankly, if this was the only chart I followed as a guide for the broader market, I'd be calling for a major move higher in the next week or two. Certainly, if we see a weekly close in the 9300s, it will bode for the giant 10K threshold by late summer... which would be suggestive of sp'2250/300.

I realise to some of you out there, the notion of a push higher across much of the summer is crazy talk.. after all, we're going to crash, right? I can only suggest... go stare at the above Transports chart for a good hour.

*Fed official Evans will be speaking around midday.. and Mr Market will no doubt be listening.

US equity indexes closed moderately higher, sp +6pts @ 2114. The two leaders - Trans/R2K, settled higher by 0.1% and 0.4% respectively. Near term outlook is bullish, with the sp'2140s viable into the monthly jobs data this Friday morning. First support is the 2090/85 zone. 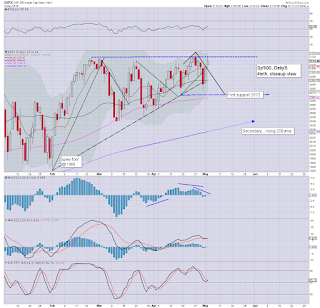 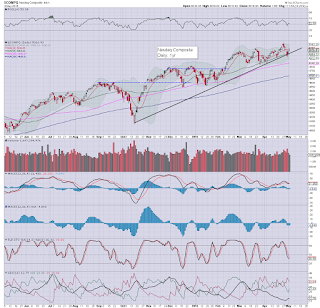 Moderate gains for most indexes, but it does remain the case that the market has been broadly stuck since last December.

Increasingly, more are recognising that the market is coiling for a stronger move... one way or another. My guess.. it will be to the upside.. for one final up wave.. before the next sig' correction of 10/15%.

For now, I see ZERO reason to be short the main indexes. The only wild card is Greece, but thats been the case since spring 2010, right?